It’s early June and our world is lush, given this past winter’s snow and now the spring rain. Areas that we remembered as being dry last year, are filled with puddles or streams right now ( I promise I’m not going the mention those pesky little buzzers that frolic about my face and sting my hands–and how much they’re loving the current conditions. I did spot some dragonflies yesterday, but today not a one).

It’s those wet conditions that threw a friend and I off for a wee bit this afternoon as we tramped through the woods in search of a yellow lady’s slipper. Initially, we were about fifteen feet too far to the right as we tried to avoid the water.

After wandering for a short bit, we finally found it on a bit of dry land–and then stood in awe–at our own ability to locate the flower, but even more so at the flower itself.  Yellow lady’s slippers are not rare, but uncommon and so we rejoiced with our find. They prefer mesic (moderately moist) nutrient-rich forests (as well as in bogs and swamps), thus the water (and mosquitoes–okay, so I broke my promise).

Lady’s slippers are members of the orchid family.  I used to think orchids were flowers girls wore on their wrists for senior prom or grandmas coveted–though I never knew either of my grandmothers, but certainly it was an “old lady’s” flower. My, how my understanding and appreciation has changed because I am certainly NOT an old lady. Or am I?

Check out the reddish-brown dotted pathway–like landing lights at an airport runway. Their intention is to guide pollinators. If we remember to return in the fall and look for a seedpod, we’ll know that the dots worked. They often don’t.

We could have gone home then, so tickled were we with our success of finding that pouch of a flower, but . . . as you might expect, we continued on, making several brook crossings as we went. 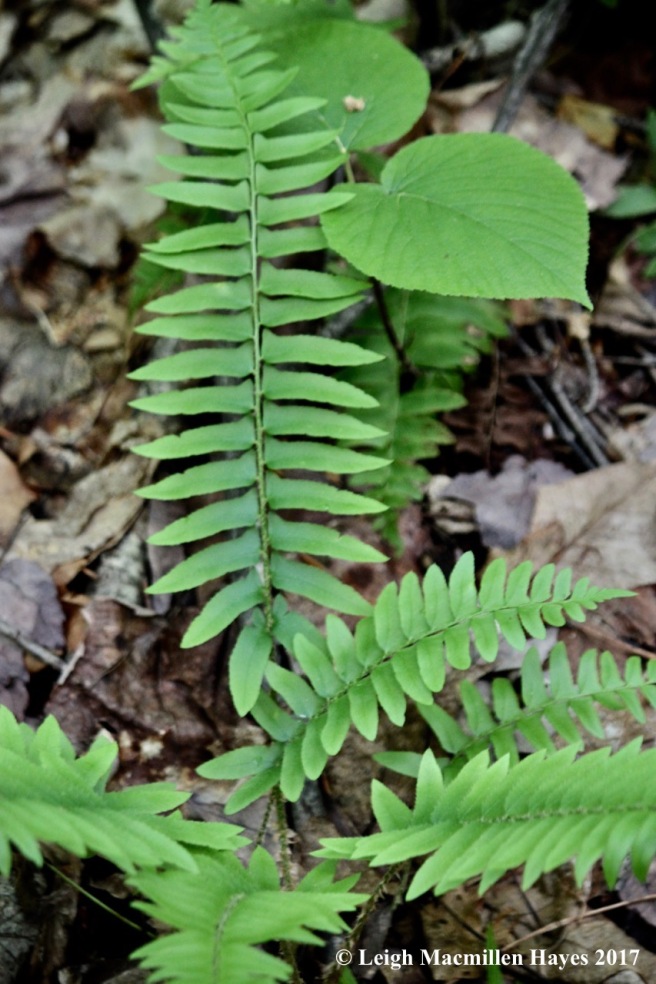 And because it was so damp, the forest we roamed was filled with Christmas ferns featuring young and old blades.

We even found one that sprouted an Indian Cucumber Root whorl as if it was a flower.

But what aroused our curiosity was another that seemed to have been affected by insects forming galls. Neither of us could remember seeing anything like this before, but then again, so many times when we see something we think of as new, we soon discover that it’s more prevalent than we realized. That being said, we only found the “galls” on a few of these ferns, all in the same area in a wet seep.

Further along, we noted sessile-leaved bellworts, in flower a month ago, now sporting their seedpods or wild oats that speak to their other common name. And the leaf of at least this one had been visited by an insect–a leaf minor trail standing out in white against the green.

And then we found craneflies canoodling. They didn’t seem to care that we watched.

They weren’t our only wildlife sightings (besides the mosquitoes–did I mention mosquitoes?). A young American toad hopped by, pausing ever so slightly to show off its raised warts. 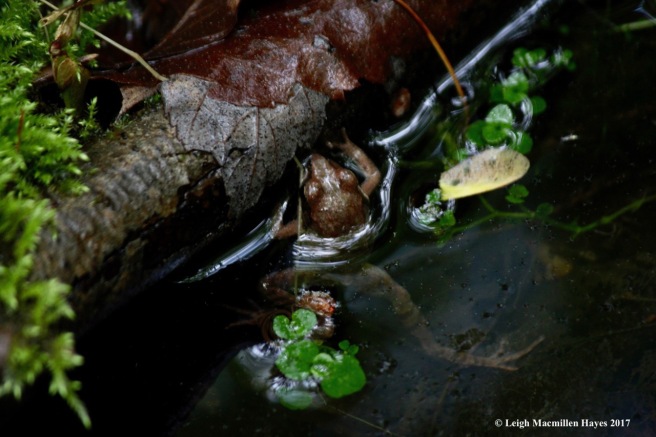 And a frog slipped into the water–the better to escape our ogling.

As we wound our way around a wetland filled with cinnamon ferns, we noted a few flowers in bloom or about to bloom. 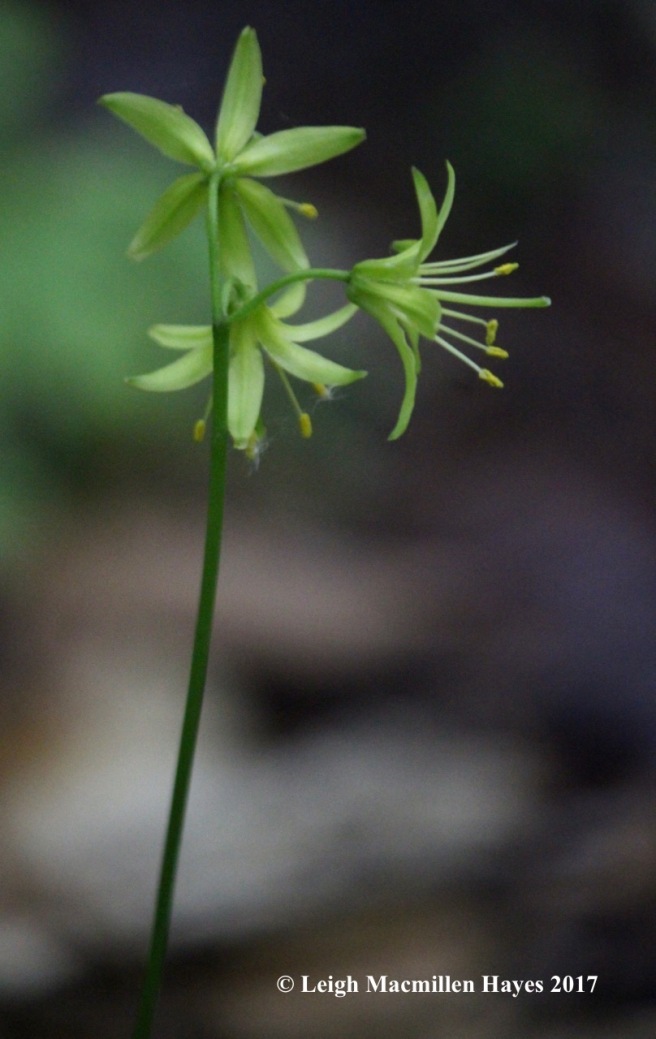 Jack-in-the-pulpit (times two actually–and I’m not sure how we spied these for they hid like trolls under their leaves),

and early coralroot caught our attention.

Not yet in bloom was the round-leaf pyrola, aka American shinleaf. Oh darn, another reason to return and see it blossom.

And just past its blossoming stage–red trillium,

its red leached to almost maroonish brown and stamen looking rather gray. 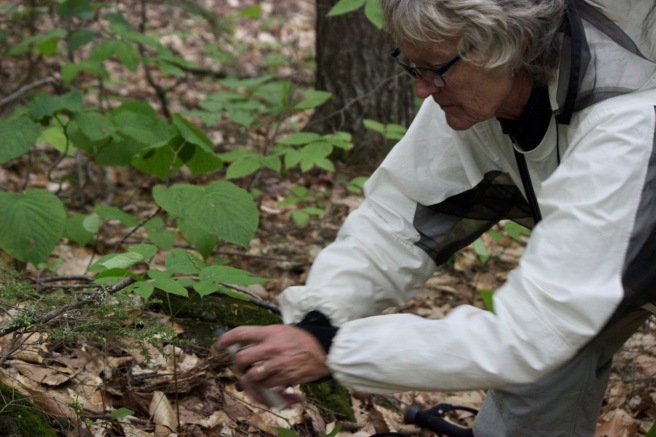 Despite the mosquitoes (what mosquitoes?) and a few raindrops, we shared a fun afternoon hike circling the path of the Greater Lovell Land Trust’s Ron’s Loop by Five Kezar Ponds.

The journey was with my friend named Pam, not June. But June is the month and together we enjoyed numerous dandies that need to be enjoyed in the moment for soon we’ll not realize they ever existed.

June dandies indeed–worth making time to wander and wonder. (Despite the mosquitoes.)