On my way to meet a few docents and the new interns for the Greater Lovell Land Trust this morning, a photo opp presented itself and I was forced to stop. 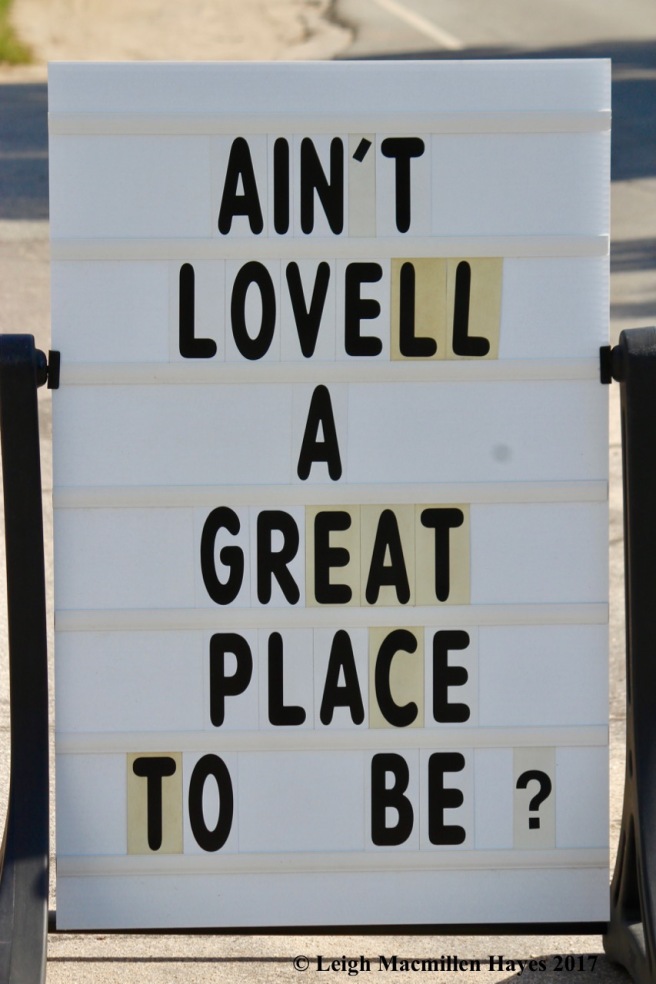 Stan Tupaj of Kezar Realty strikes me as the town cheerleader and I love to read his sign as I pass by. From time to time I’ve meant to photograph it, but somehow always seem to be in a rush to get to the next destination. But this morning I was a wee bit early and so this was the day. 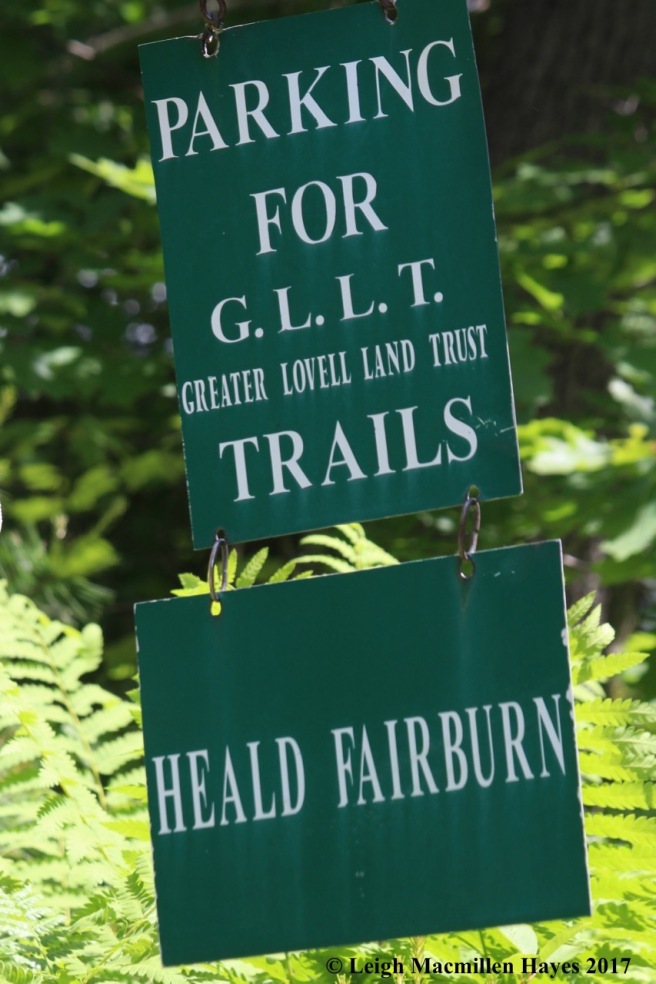 From there, I drove on to the Fairburn parking lot on Slab City Road where I planned to meet the crew. 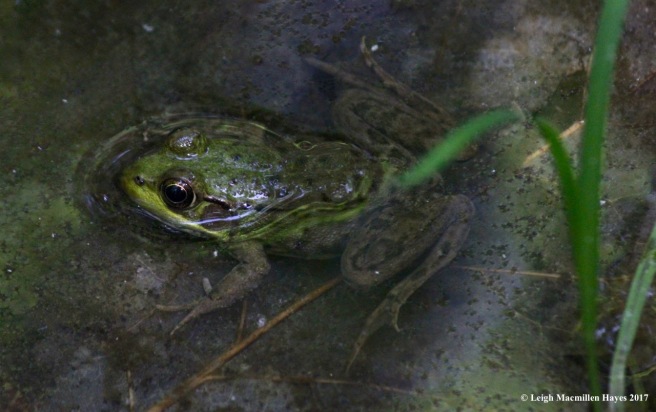 Our goal was to walk to Otter Rock, not a far walk by any means, but it took us 1.5 hours to get there, such were the sights along the way, including a few green frogs in puddles along the trail. I know he’s a green frog and not a bull frog because he showed off a dorsal lateral fold along the sides of his back. 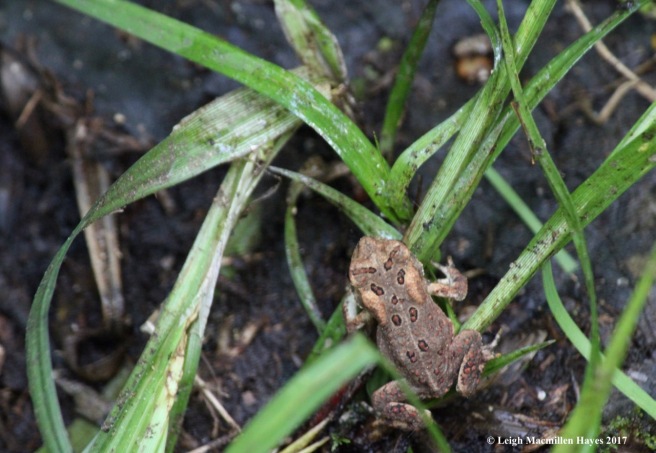 While the green frogs were beside or in the water, the ground seemed to hop at our feet in dry places thanks to a kazillion baby American toads on the move. 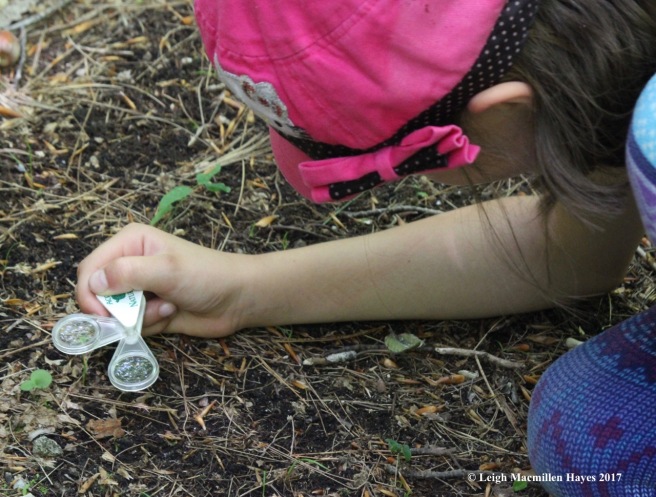 I noted that it seems the younger toads are in constant motion, while older and much chunkier ones pause and try to blend into their surroundings, allowing us to study them (and take photos–just saying). One of the younger members of our team, Ellie, proved me wrong as she charmed a young toad to stay still while she looked at it through her hand lens for several moments. It wasn’t until Ellie moved that the toad hopped away. 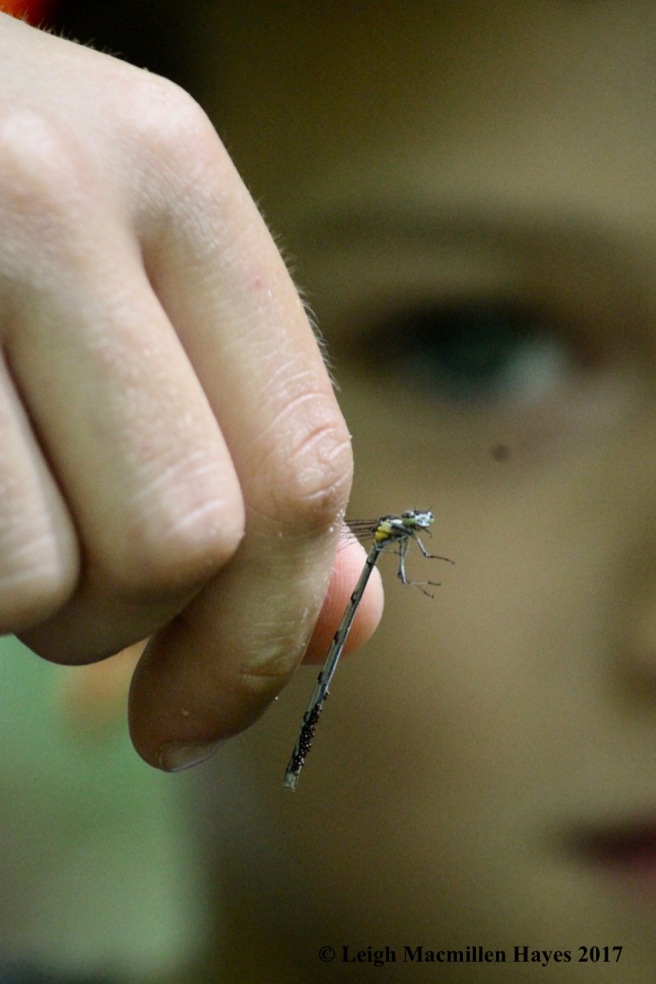 While Ellie was the toad whisperer, her older brother Caleb wowed us with his ability to capture dragonflies and damselflies in a net, such as this one. As he held it high, he realized it was a she for there were eggs on her abdomen and so he gently released her–in hopes she’d find some vegetation on which to inject those tiny sacs. 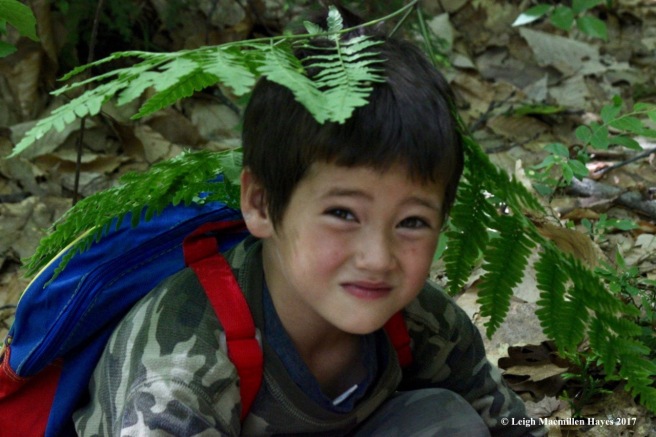 Their youngest brother, Wes, demonstrated the value of bracken ferns–which served as a fun hat to keep the mosquitoes at bay. 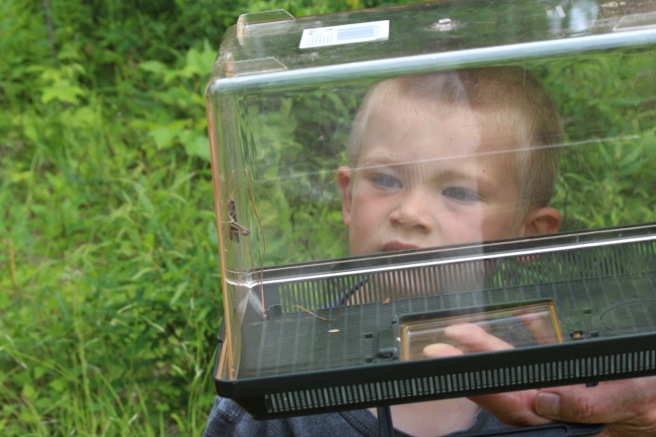 And it wasn’t until later that I realized I didn’t have a photo of Ellie’s other brother, Aidan, but I knew of one from a prior insect walk that showed his own curiosity. 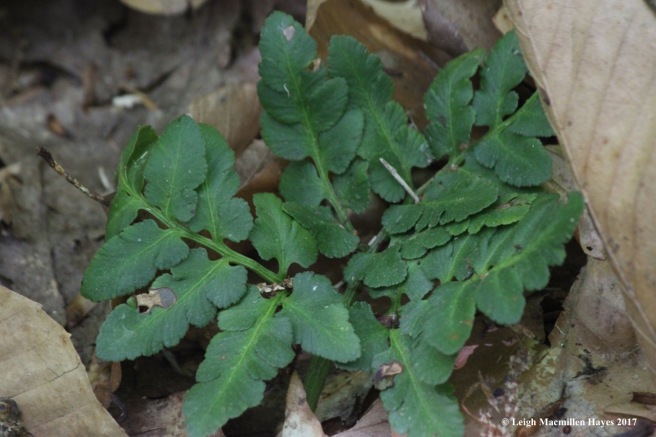 We looked at tons of plants as well and were all especially eager to re-greet the grape ferns that we knew grew there. 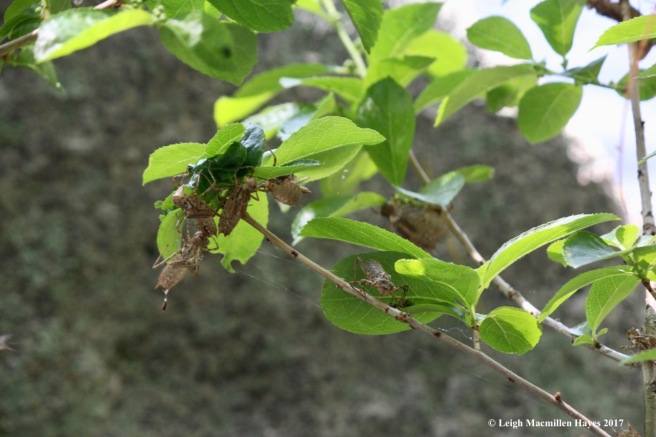 At last we reached our destination, Otter Rock on Heald Pond, where we found what we had hoped for: exoskeletons decorated the landscape. 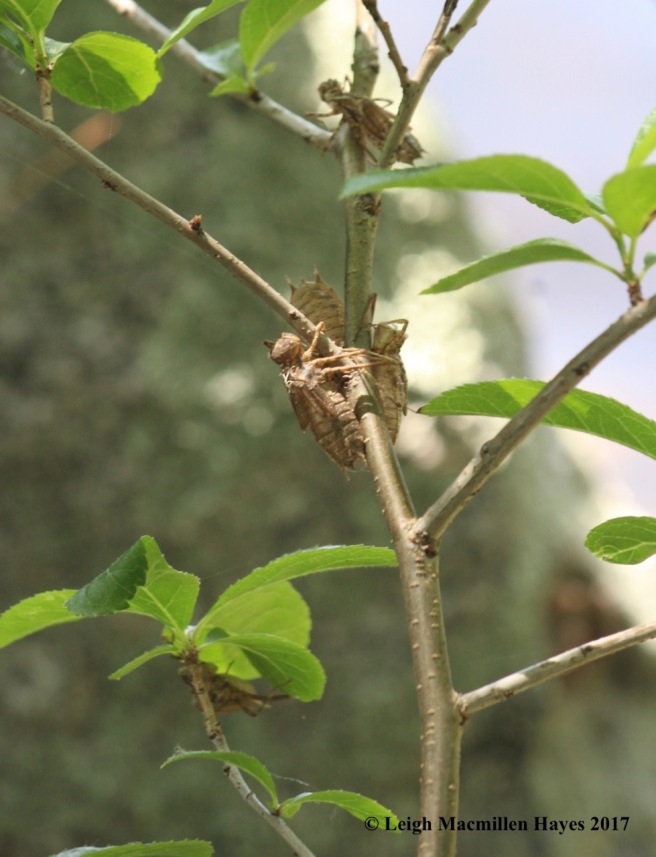 Dragonflies lay egg clusters into sediments or tap small clumps directly onto the water’s surface. Each egg hatches into a small nymph, which grows until its ready to emerge as a flying adult. At that time, the nymph crawls to the surface, and ever so slowly, the adult pulls itself free of the exoskeleton. It’s the most amazing process to watch. But even if you don’t have that opportunity, just seeing the left over nymphal shells and knowing that the magic happened is worth a wonder. 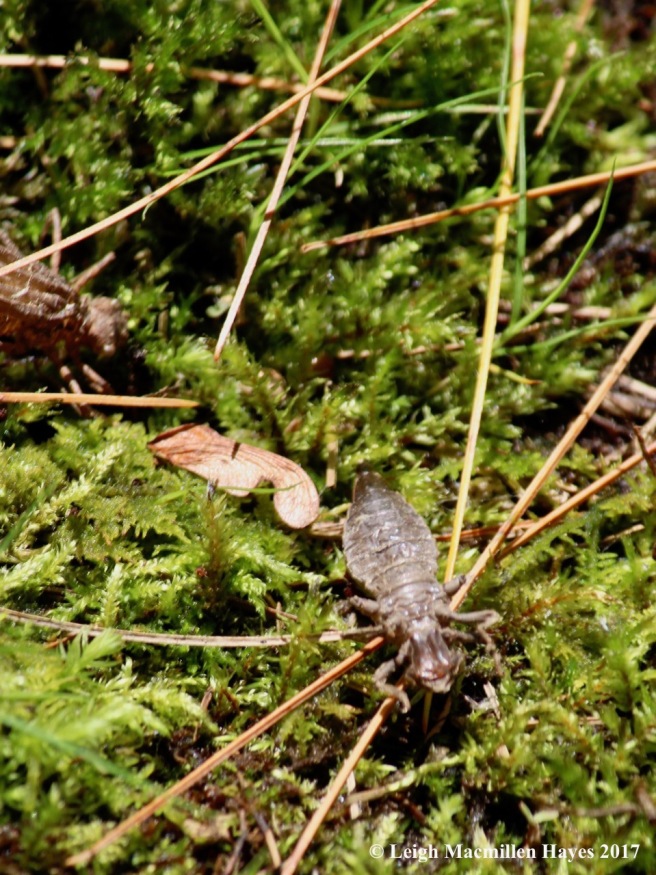 We had to watch where we stepped, for the exoskeletons not only decorated the shrubs, but also the ground . . . 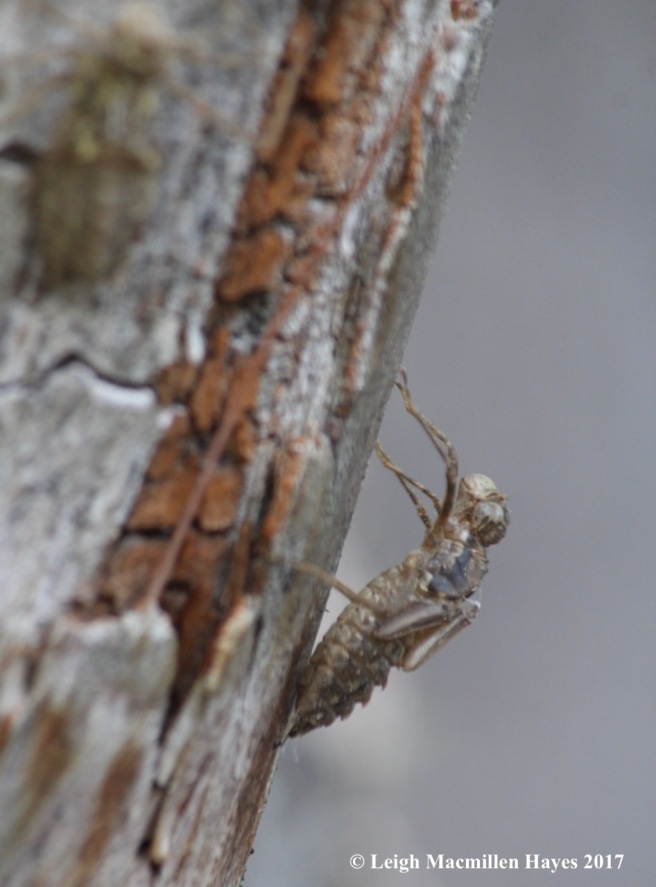 and even the trees. 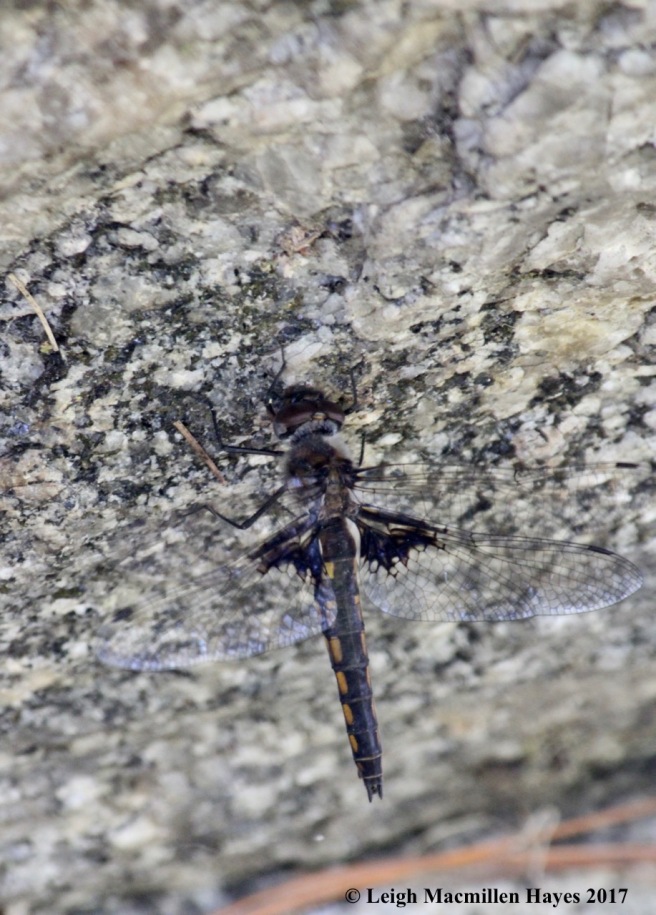 And then we began to notice newly emerged dragonflies like the widow maker on Otter Rock, 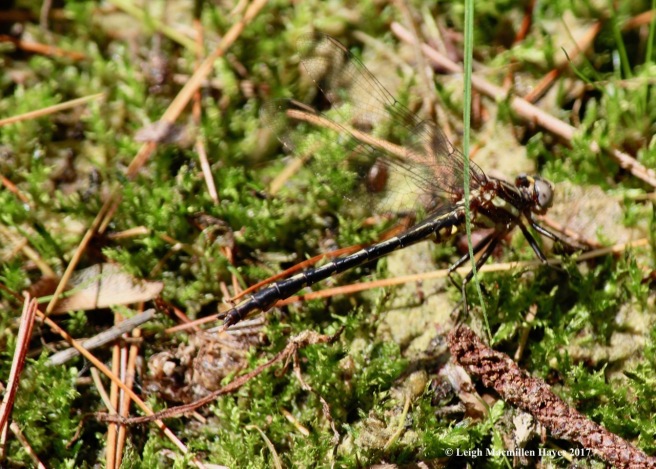 and black-shouldered spinyleg on the ground. We were afraid to step for everywhere our eyes focused, there was either an exoskeleton or a dragonfly drying its wings in preparation for a first flight. 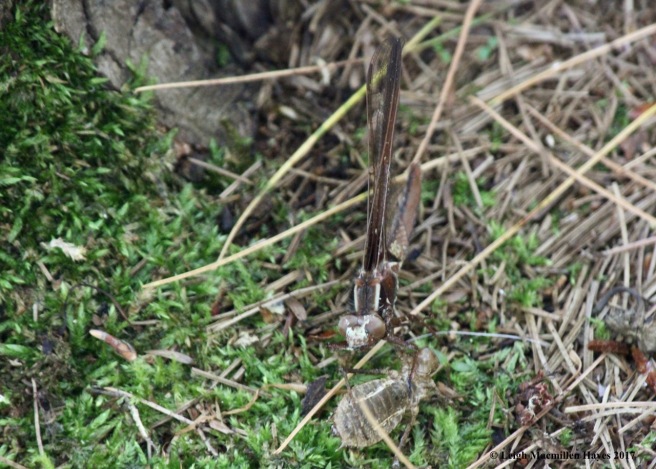 As we looked about, Caleb spotted one struggling in the water, so he pulled it out. 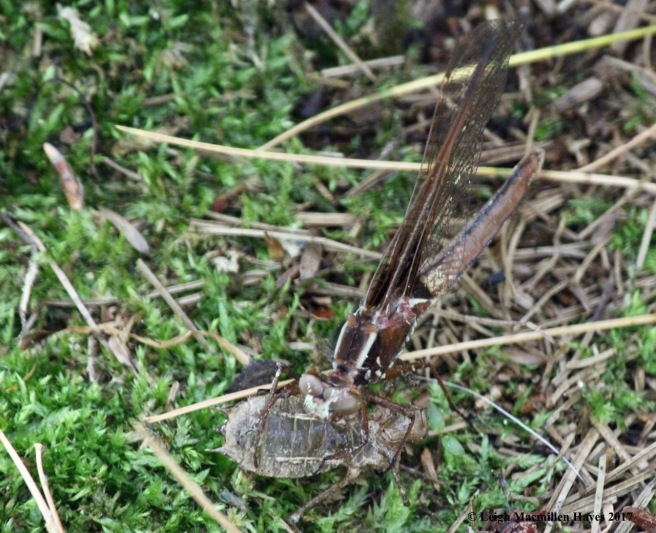 Coated in a bit of pollen from the pond, it still clung to its exoskeleton. 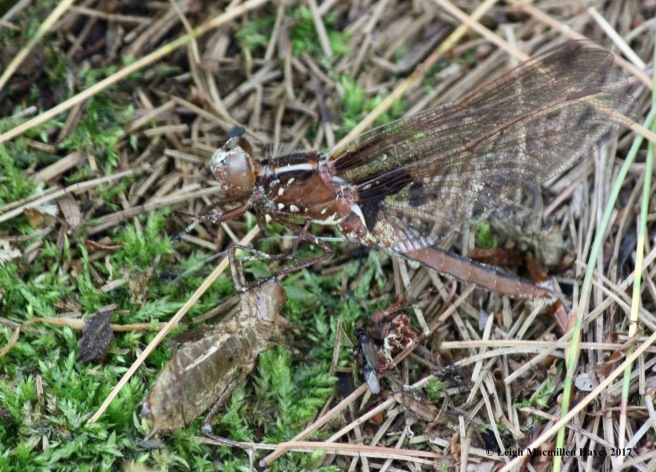 We watched for a few moments as it moved about, those wings slowly drying. I think my ID is right and this was a chalk-fronted corporal. At last it was time for us to draw our sense of wonder to a close and make our journey out. 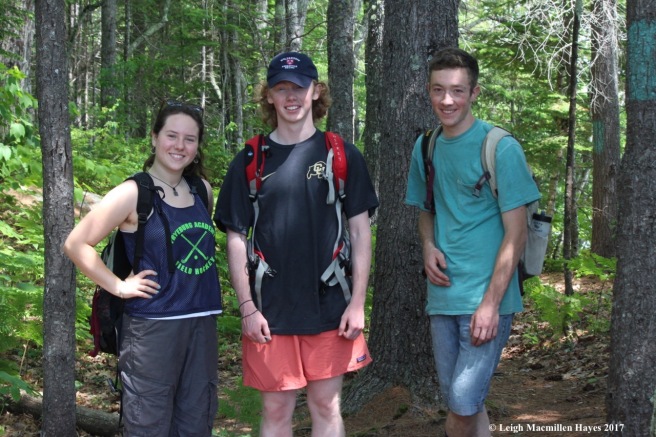 But first, I asked our interns to pose–meet Hannah, Kelly and Dakota. Today was their first day of work and we probably overwhelmed the two guys a bit. Hannah was with us last year, so she knows our ways–that we walk slowly and look at everything. She gets it and we love that. We’re excited about the possibilities ahead. Join us for a GLLT walk or come to an evening talk and you’ll get to meet them. 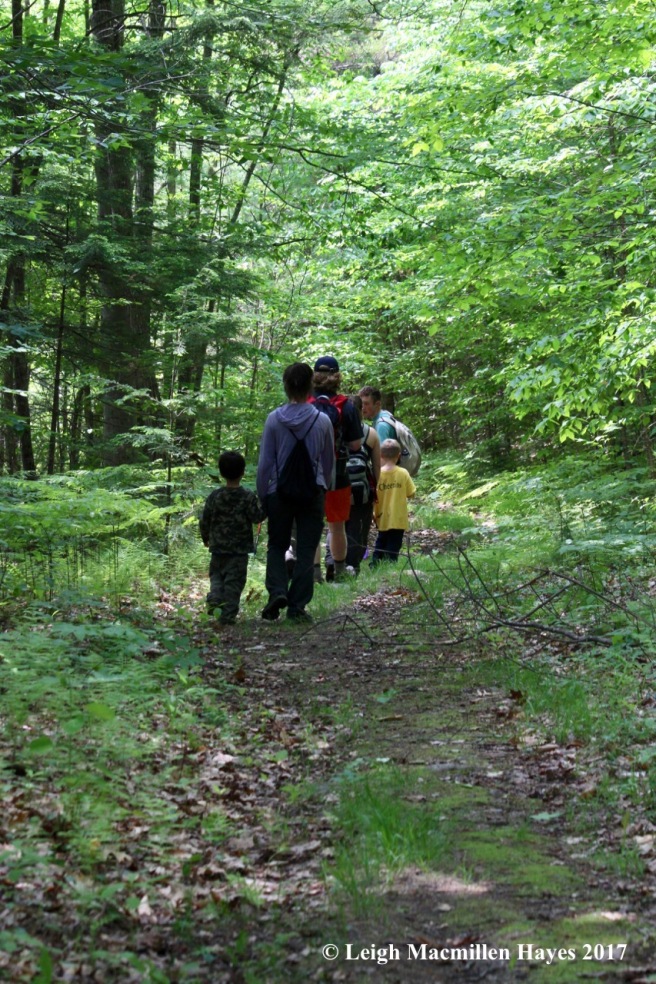 Our walk out was much quicker, though we still stopped occasionally.

In the end, I have no doubt that we knew the answer to Stan’s question: Lovell IS a great place to be.

2 thoughts on “Ain’t Lovell A Great Place To Be?”