Yesterday was Father’s Day and so I asked the question first, “Where are we hiking tomorrow?” My intention was that it would be a gift for him to choose. But only moments later I announced that I had a suggestion–he didn’t have to accept it, of course.

I’d learned that the Western Maine Foothills Land Trust had cut a trail at the Noyes Mountain Preserve in preparation for their 30th Anniversary in July. And since one of our recent Maine Master Naturalist grads, Kelly Hodgkins, now works for the land trust and used this mountain for her capstone project, I wanted to visit it.

So much for letting my guy choose. But he appreciated the thought and agreed on our destination. And so mid-morning today, we drove to Greenwood–the birthplace of LL Bean. We honored him well for our hiking pants, boots and bag were all Bean products.

Kelly had told me to follow Richardson Hollow Road for 1.5 miles and then to look for a small parking lot on the left. We located it easily, but parked on the road instead because a few vehicles were in the spot. Apparently we weren’t the only ones eager to make the climb despite the mugginess of the day. We actually met the parties as we headed up and they descended. People and dogs–all sporting smiles. 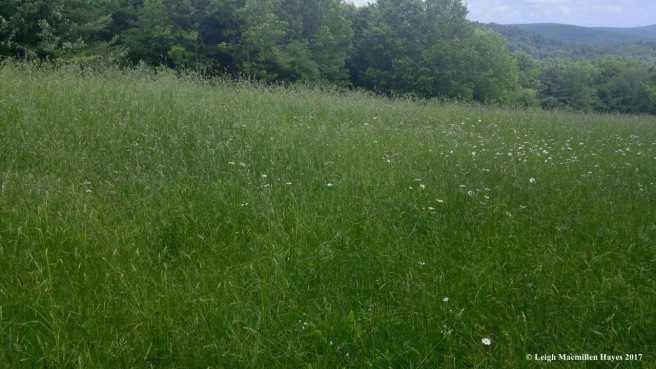 A mowed path crossed the field where daisies and buttercups and hawkweed grew among the grasses. We began to develop a sense of the land’s former use, especially as we spied stonewalls through the trees. 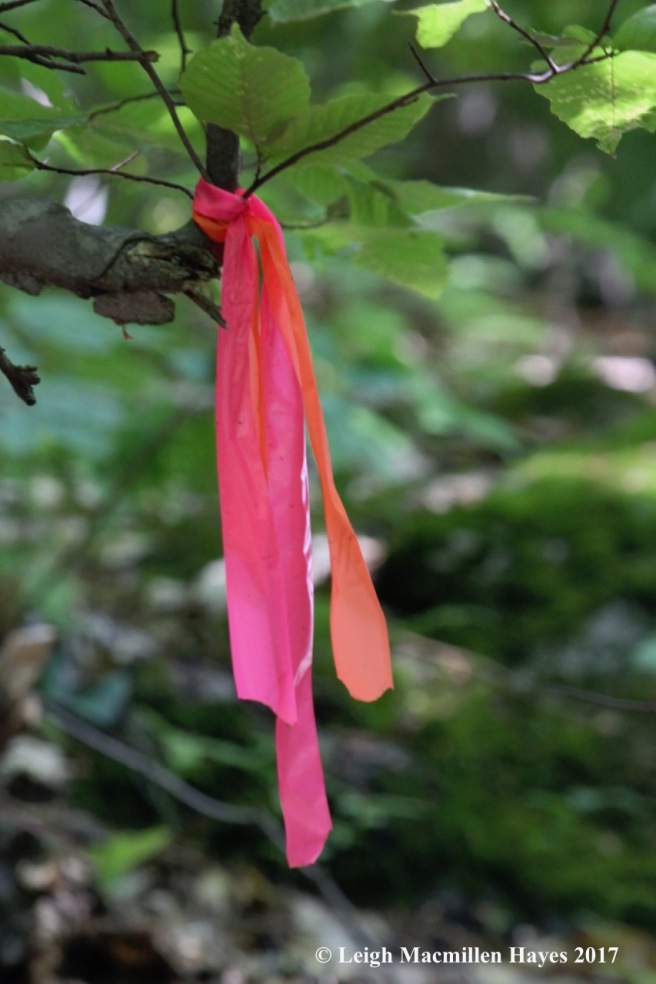 And then we moved into a hardwood forest and the upward climb began. Kelly had warned me that the trail was rough cut, but flagged. And a gentleman on the way down said they’d gotten off track for a bit when they didn’t make a turn because they were looking down and missed the flagging. Thanks to that word of caution, we made sure to always look for the next piece of tape and had nary an issue. 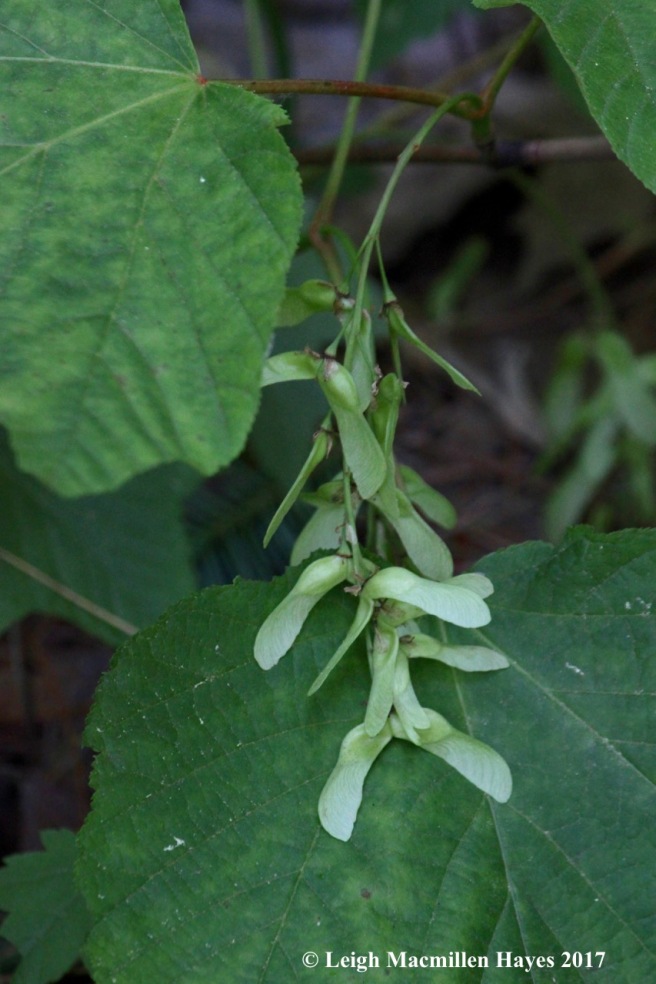 I looked down as well. That’s where I saw striped maple samaras maturing as they rested upon a leaf, 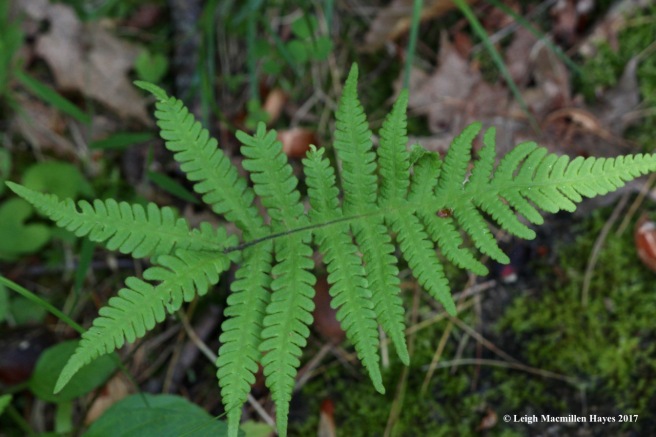 a narrow beech fern arched over the ground, with its lowest pinnae unconnected by wings as those above it and drooping downward, 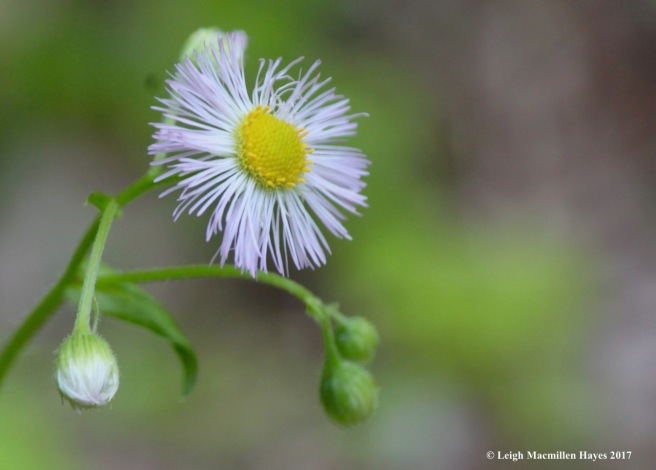 and common fleabane sending forth cheerful rays of lavender from its composite disk. 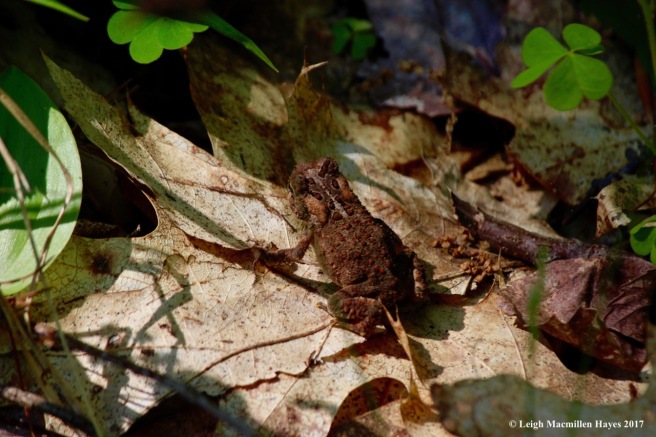 I was actually surprised to only meet one young American toad as it seemed a place where the ground should have been hopping with many more. 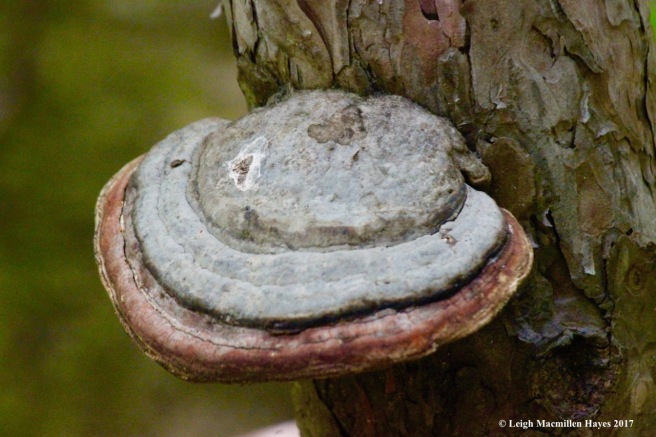 On a red pine snag a red-belted polypore looked a bit old and tired. 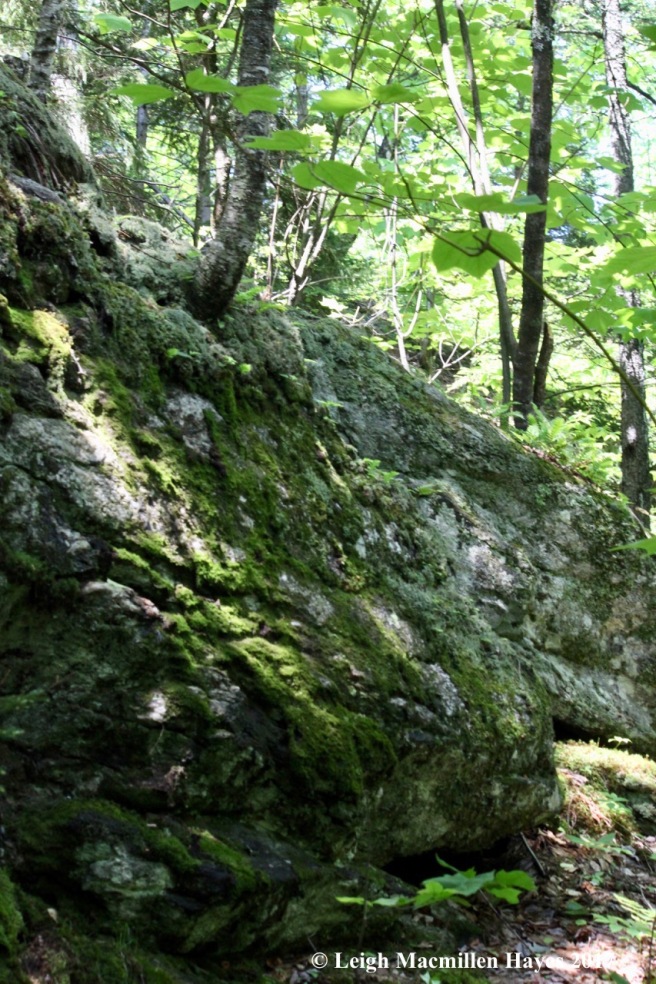 And then suddenly, the community changed and we faced a moss-covered ledge where the trail turned to the left. 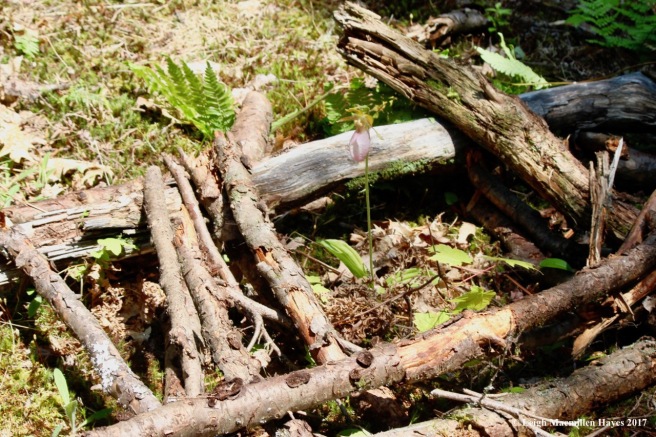 When the trail widened a bit, we noticed a frame and realized it was meant to protect the lady’s slipper within. And so we bowed and curtseyed in her honor. 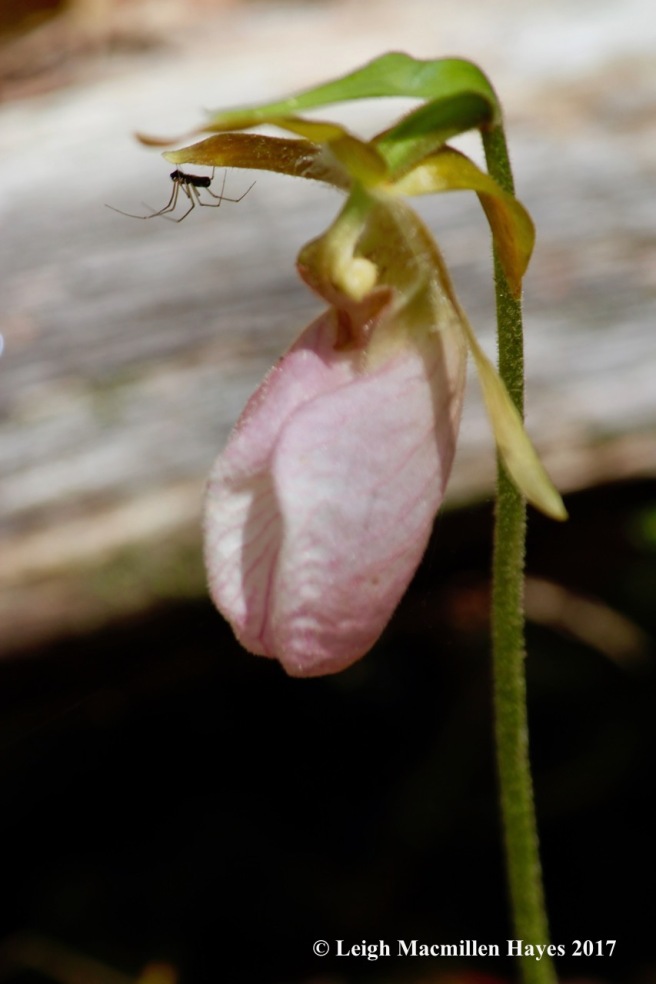 That’s when we realized we weren’t the only ones paying attention–perhaps the spider wanted to see if the slipper fit. 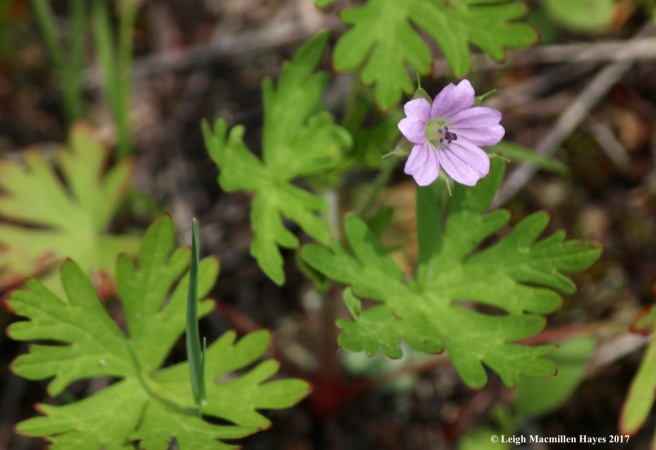 Again, we continued to climb, but noted that the community changed again and we were in the land of evergreens and blueberries as we reached for the summit. A flower I wasn’t familiar with kept asking to be noticed–and so I did and later keyed it out to be a northern crane’s-bill.

Then we saw a path not cleared, but with a tag wrapped around a tree limb. And another beyond that. Should we follow it? It looked like it led to the ledges that were supposed to offer a view. We decided to stay on the trail with dangling tape, though as it dipped downward and to the right we questioned our decision–until it swung around to the left and we realized we were possibly looping around. We hoped. 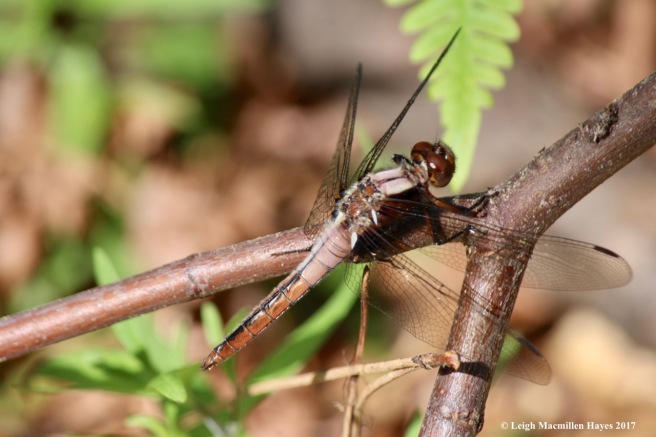 It was along that section that the corporals joined us, in this case the browner version, which is a female. 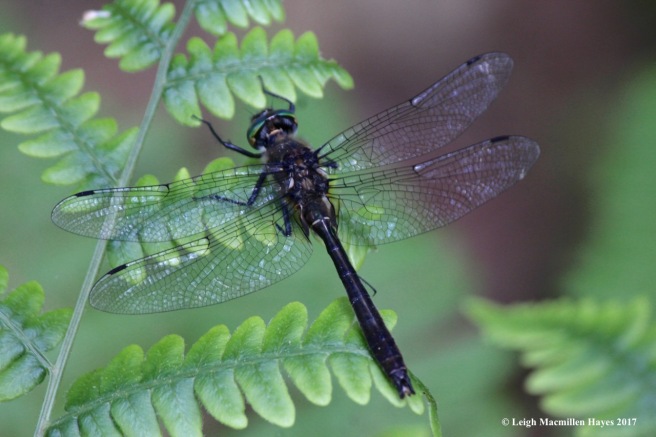 And an American emerald dragonfly, with its metallic green eyes and a narrow yellow ring around the base of its abdomen, took time out from hunting duties to pose. Speaking of dragonflies, while we celebrated their presence, we also noted that there were no mosquitoes. A few deer flies sang in our ears. Was it the wind that kept the mosquitoes away? There were certainly wet spots here and there on the mountain. 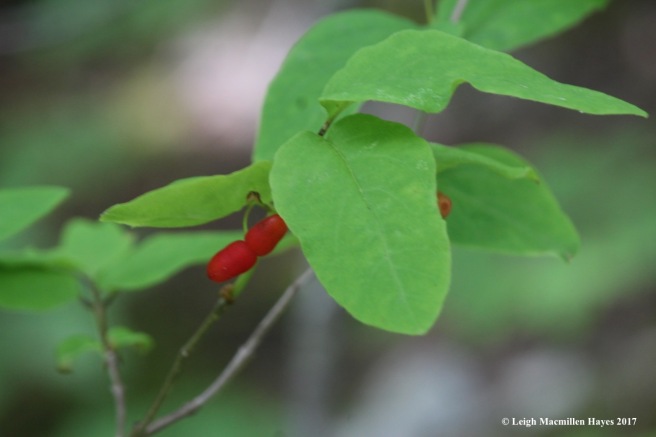 Our wonders continued with the red fruit of swamp-fly honeysuckle and . . . 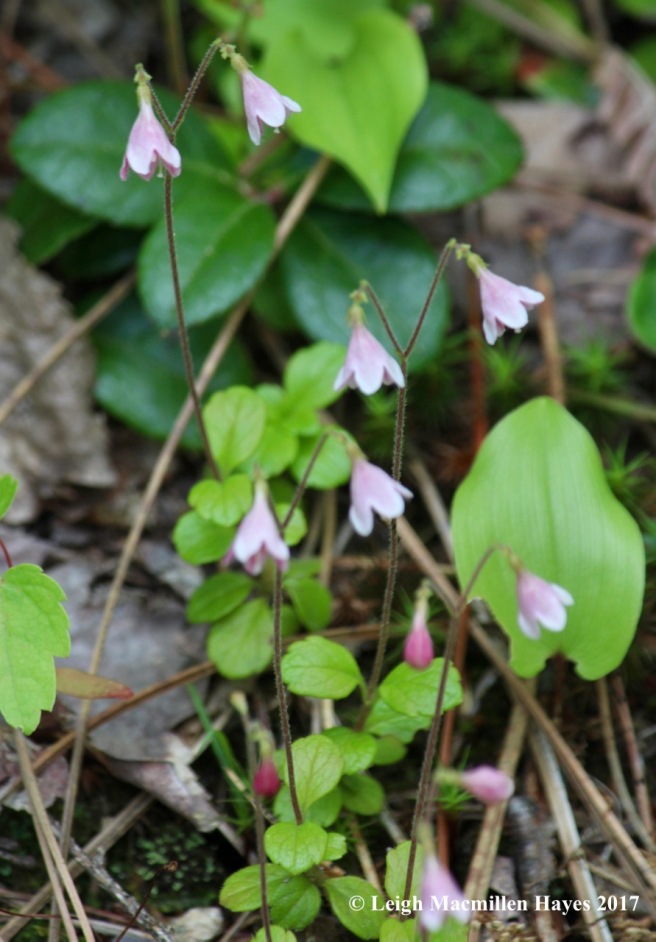 a sweet patch of twinflowers. 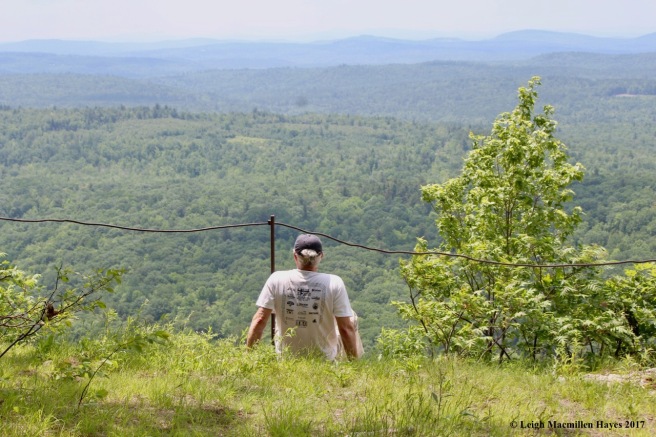 And then, about an hour after we’d started, we stepped into a small clearing with a view. Well, you know who got there first and was waiting when I arrived. 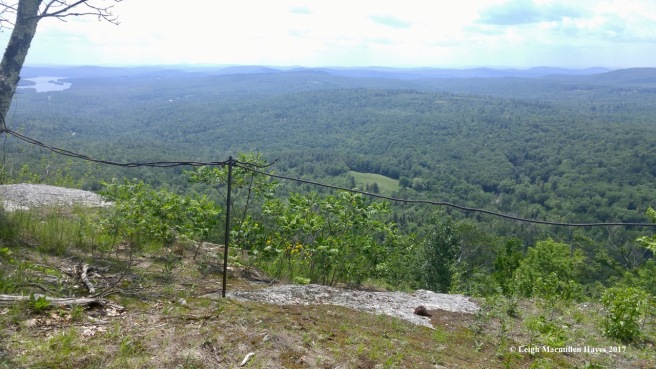 While he looked at Norway Lake (Lake Penneseewassee), I looked around at the plants that grew there as more dragonflies darted about. 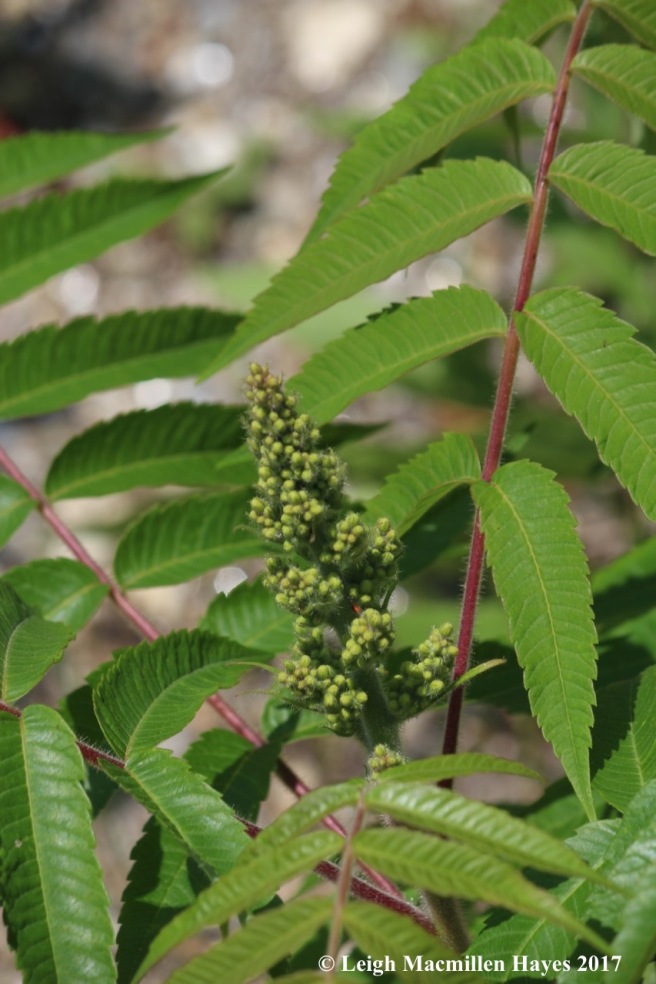 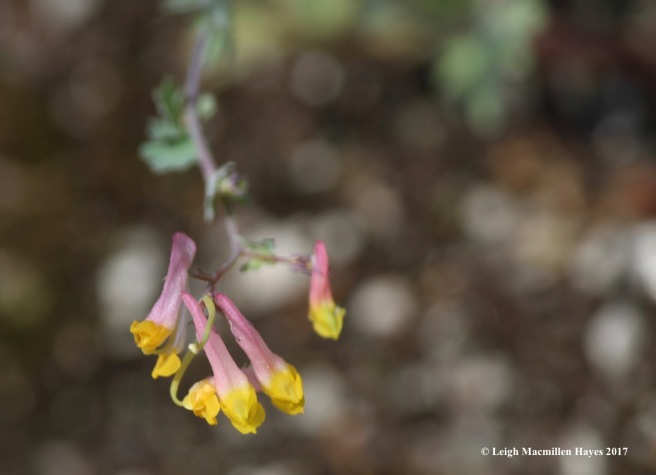 pink corydalis, plus yellow hawkweed, yarrow and others I can’t remember now. 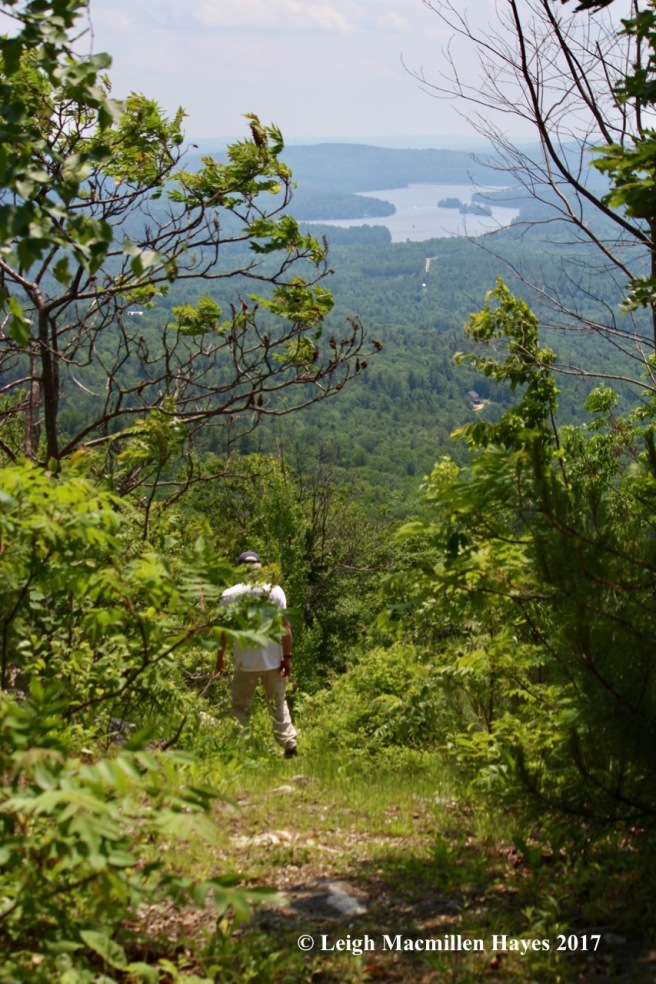 When we were ready to leave, we noticed more orange flagging and another trail leading down. So . . . we followed it. 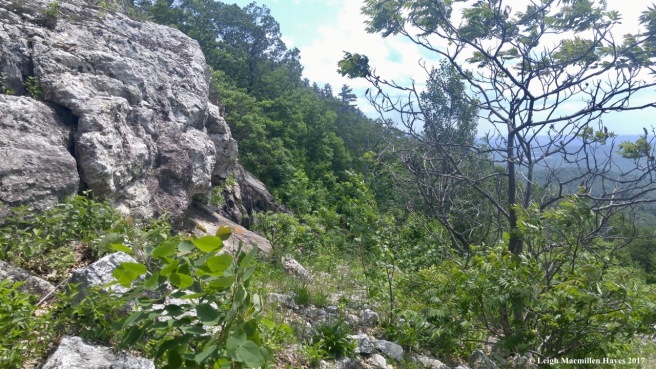 We could see the ledge above, but weren’t sure what was in store for us next. 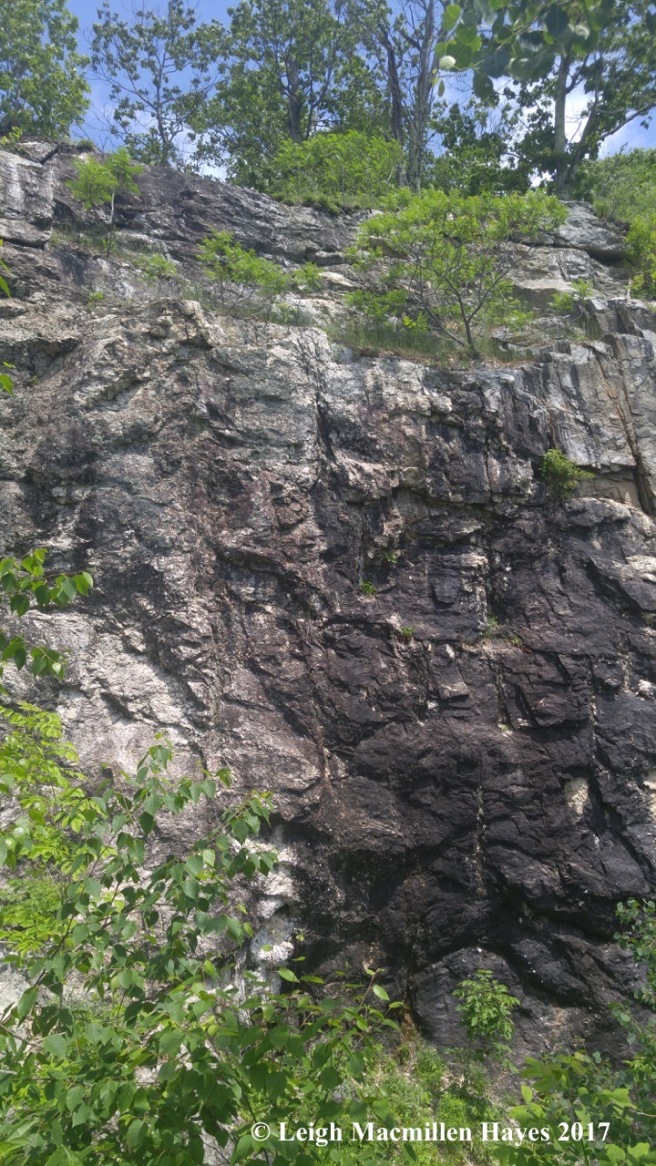 The rock face was steep and had a certain look to it, as if it had been worked. 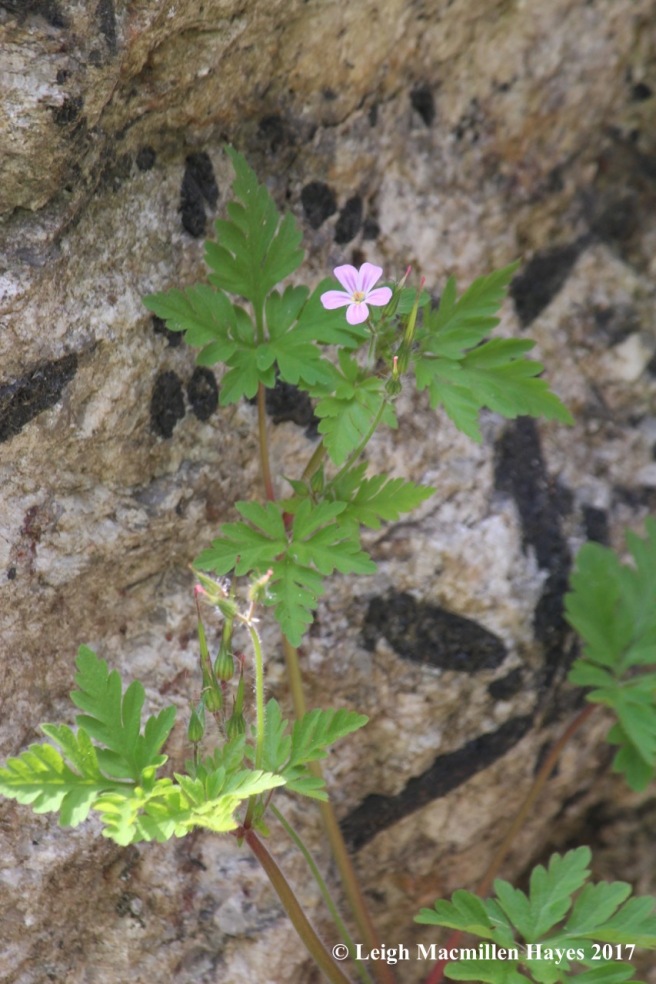 Rounding the final corner, we both knew what to expect, but first, another flower. There were many flowers on that spur trail and I knew I had to save them for another day. But this one stood out against the rock face and strongly resembled the northern crane’s-bill I’d spied occasionally on the way up. If my ID is correct, this species is a mountain crane’s-bill. 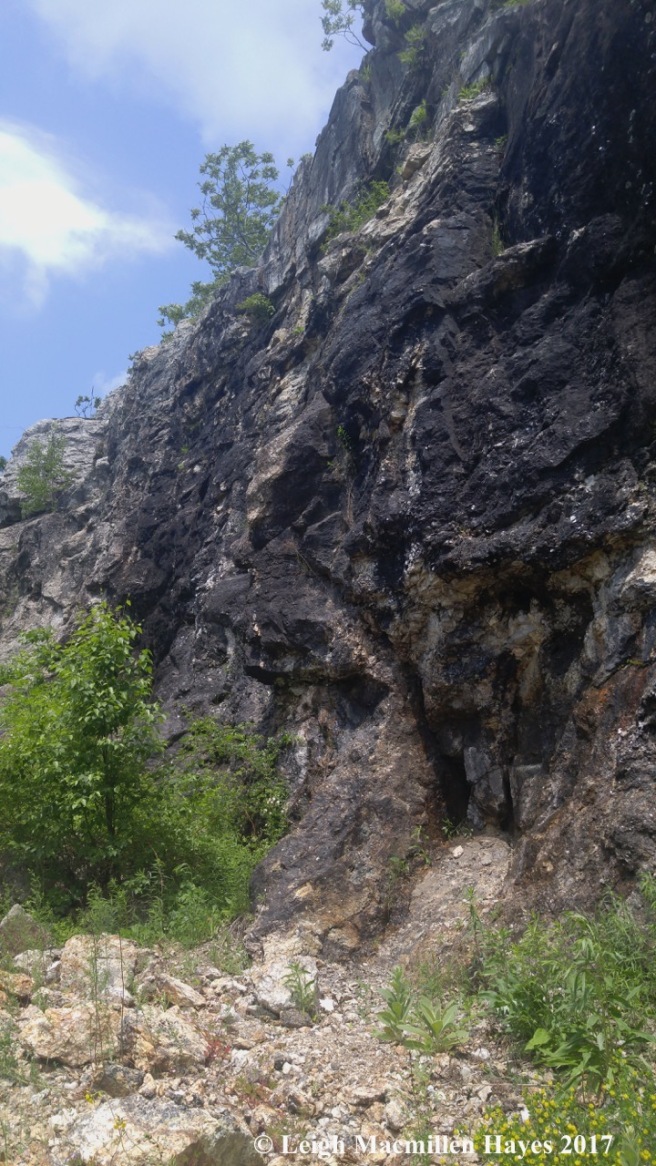 And we were in the Harvard Quarry. According the Western Foothills Land Trust page about the preserve, “Historically the land, which is in Greenwood, was owned by the Stevens family and included a through road north to from Norway to Greenwood (from the Upton Brothers Road to the Hayes Road). In 1869 Ethel Stevens sold the land to Isaac Noyes.

Isaac Noyes became interested in the site’s pegmatitic outcroppings in the late 1880′s. In 1892 the ledge was opened for the first time and became a mecca for scientists and collectors alike, offering one of the most complex mineralized pegmatites in Maine. Mineral operations on the mountain were opened by Isaac’s 6th cousin George Lorenzo (“Shavey”) Noyes and Tim Heath about 1894. Tourmaline was first recorded from the locale about 1904 and over the years the green color found at this location has become known as “Harvard Green.”

The granite pegmatites Noyes collected were largely preserved and passed into the possession of the Harvard Museum, together with the lease of the property, in 1917. In the summer of 1923 active quarrying was undertaken by the Harvard Mineralogical Department under the supervision of Harvard University student Kenneth K. Landes for Landes’ dissertation, Paragenesis of the Granitic Pegmatites of Central Maine (American Mineralogist, 1925, v. 10, p. 355-411). Loren B. Merrill of Paris and Arthur Valley undertook most of the actual excavation for Landes at the site.

Currently Frank Perham owns the 1-acre Harvard quarry, which remains open to the public in addition to mineral rights on 60 acres.”

The site is also mentioned in A Collector’s Guide to Maine Mineral Localities. 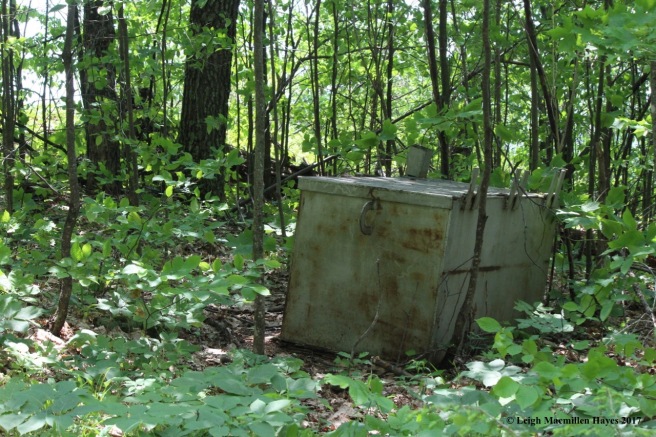 It all began to make sense for toward the beginning of the spur we saw a steel box in the woods–perhaps it once held dynamite for the mining operation. And within the quarry were old tires and hoses. All relics that I hope will remain for they tell the story. 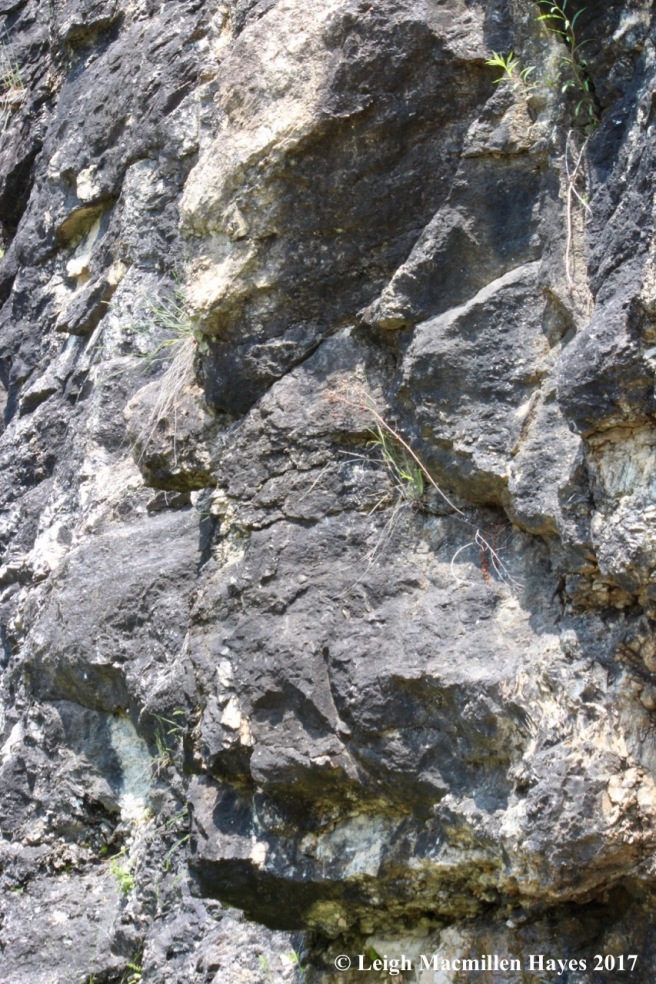 And on the rock face, I saw a face of one who will watch over all to make sure those relics never leave. (Unless the land trust thinks otherwise, that is.) Do you see it? There’s an eye with eye lashes, a bulbous nose and an angular chin.

We didn’t stay long because thunder rumbled and we knew strong winds and rain were in the forecast.

As we skidaddled down the mountain, we gave thanks to Kelly for sharing the location with us and for the future programs she’ll plan so others may appreciate this place. And we were grateful to the land trust for working hard to protect the land for now and ever.

Our Mondate on Noyes Mountain came to an end as raindrops the size of lady’s slippers splatted against our windshield. We left, however, knowing this place is well worth a return visit–probably more than one.