The phone rang as I was getting ready this morning and I don’t usually answer those with IDs such as “Private Caller,” but I did. And that made all the difference. Alanna Doughty was on the other end of the “line” and wanted me to know that this morning’s Lakes Environmental Association walk to explore the wetland plants at Holt Pond was still a go. She also asked if I wanted to borrow a pair of waders. Indeed, I did.

About 30 minutes later a group of eight had gathered at the preserve parking lot despite the raindrops. A few didn’t learn about the event until they read a description in this week’s Bridgton News, and so though they were prepared with raincoats and bug spray, they didn’t have Bogg boots or waders, but Alanna had brought along a few extra pairs and most made do. One gentleman had large feet and said he didn’t mind getting his sneakers wet. Such was the spirit of the morning. 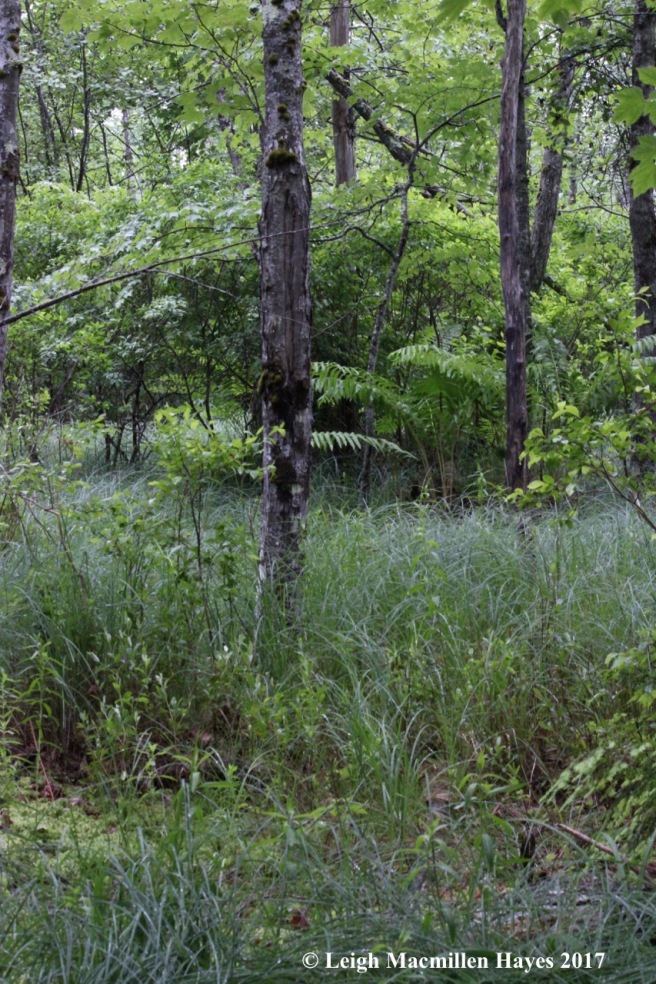 Without much further ado, we stomped down the trail and then slipped off it, through the woods and directly into the red maple swamp . . .

where raindrops enhanced the dainty leaves of the blue-flag iris. Going off trail offers a certain liberating feeling. 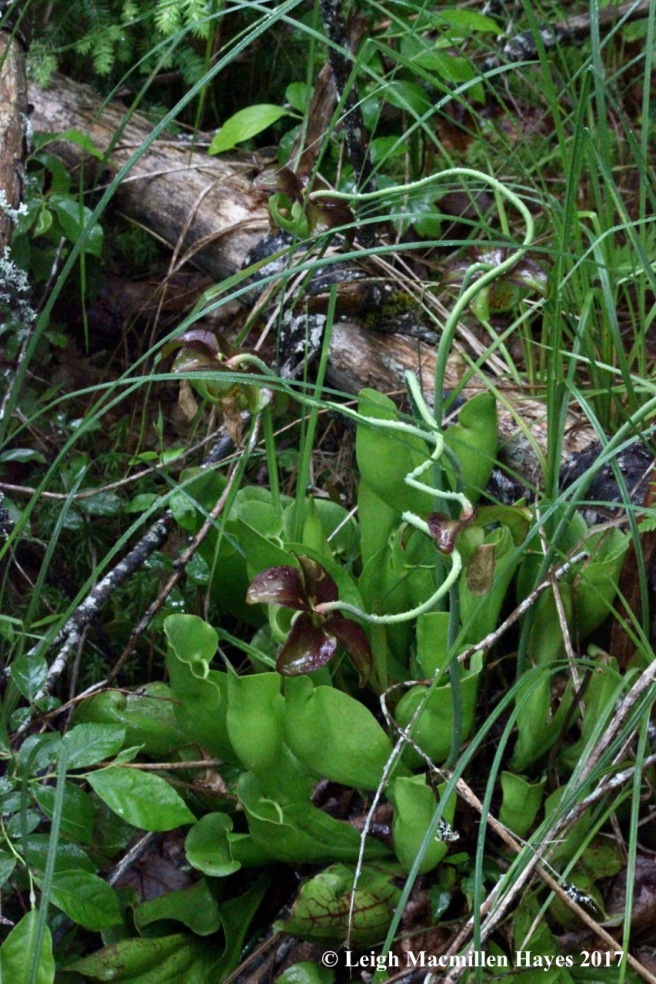 It also offers different species. Our movement was interrupted frequently by our findings, and as we stopped to determine the identification of a shrub that stumped us for a while, another plant drew our attention. Holt Pond is home to many pitcher plants, but this one cast its spell upon us for the curvy flower stems and new urn-shaped leaves. Most often, the stems stand stalwart. 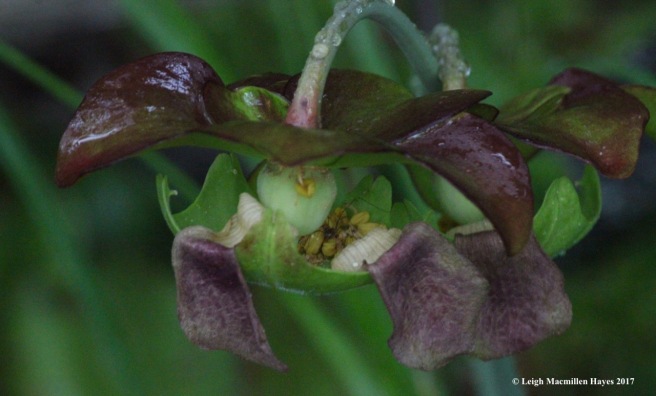 The otherworldly flowers protect friendly pollinators from accidentally being consumed. Unlike the pit trap below, aka the urn-shaped or pitcher leaves, the flowers are friendly and provide bees and other insects with nectar and pollen. This morning a spider wandered within, stepping on fallen anthers. 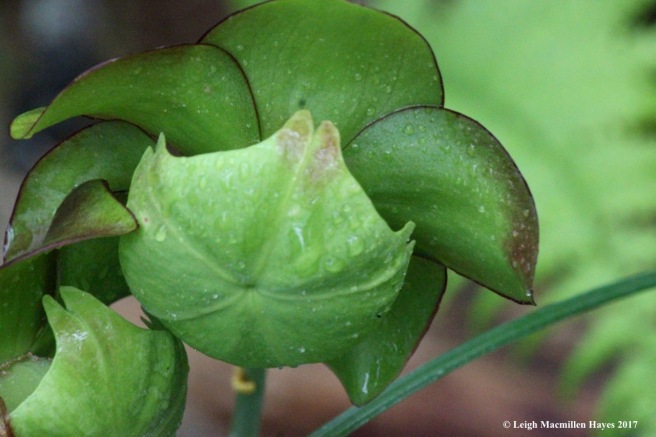 I’ve forever found it a wonder that the extremely large style sits below the rest of the structure in order to capture pollen in its upside-down umbrella shape. 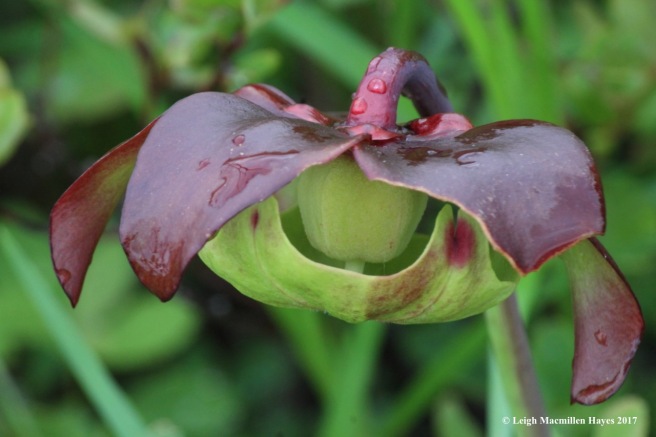 Though those flowers have aged, their leathery sepals remained, fading from red to magenta. Below the sepals the large swollen ovary may house as many as 300 tiny seeds.

After a long period of admiration, we finally pulled ourselves away and continued our tramp, finding our way through the swamp. And only briefly did we feel fake lost, but knew that wherever we came out, we’d recognize our position and continue the journey. 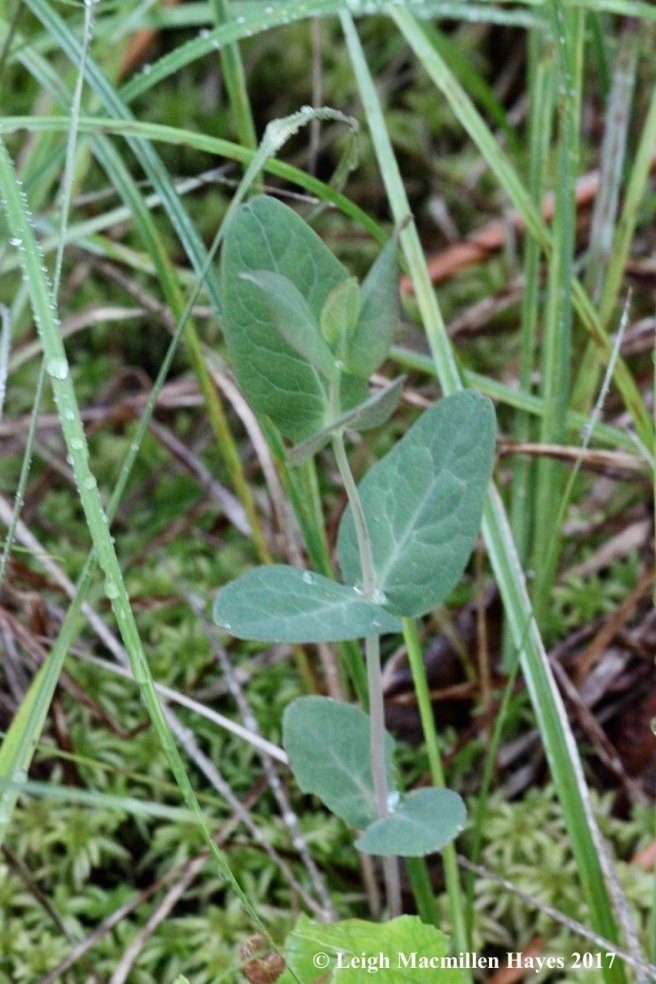 Among the sphagnum moss grew Great St. Johnswort not yet in flower. 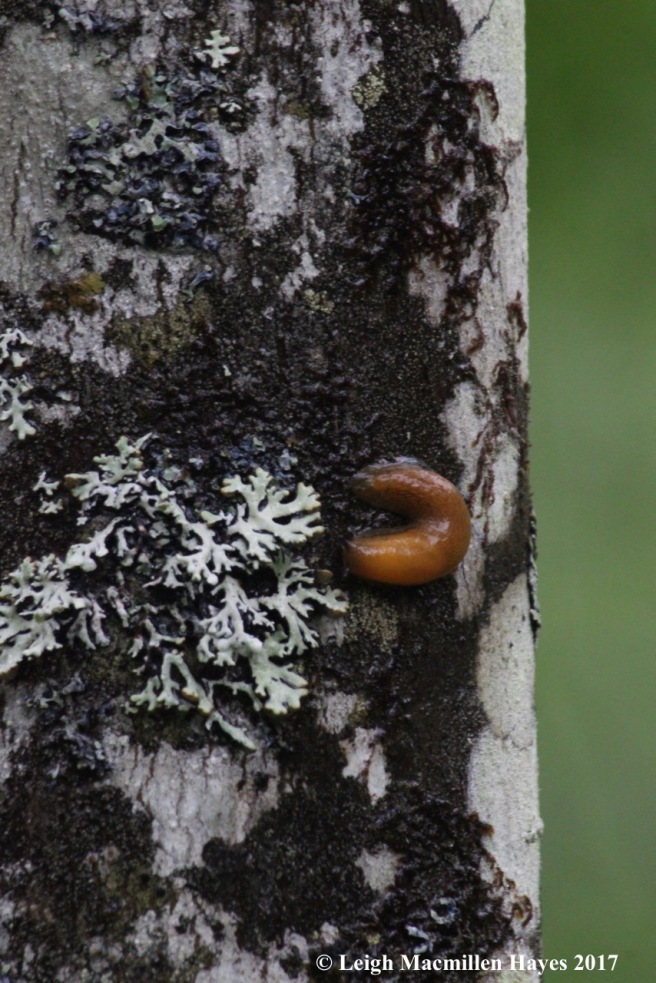 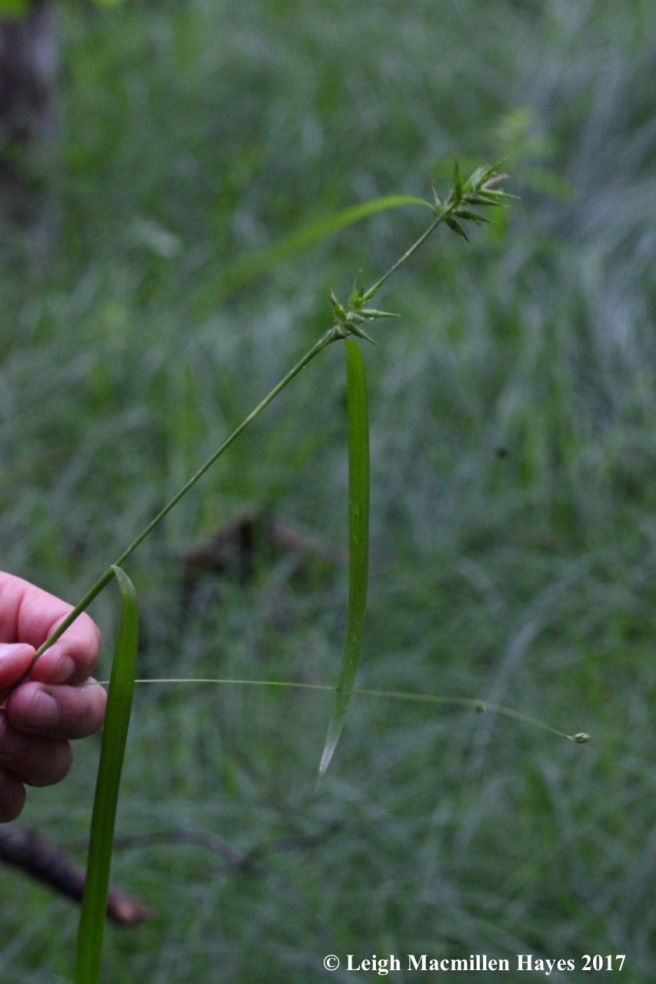 There were maples of course, and gray birches and speckled alders and royal and cinnamon ferns. But, there were also grasses and sedges and maybe even rushes. When at last we left the swamp and found ourselves on Tire Alley, about where we wanted to be, Alanna shared the ditty that helps us to maybe not name a particular species, but at least to know where to begin: Sedges have edges, rushes are round, grasses have joints all the way to the ground. Of course, she passed around examples so everyone could feel the edges of the sedge and see the joints on the grass.

Then she stopped to describe the former flower of hobblebush, and I noticed the bouquet in her hand had expanded–her collection intended for further study later in the day.

We were about to head from the trail into the quaking bog by Holt Pond when Mary Jewett spied a growth on an old birch tree. 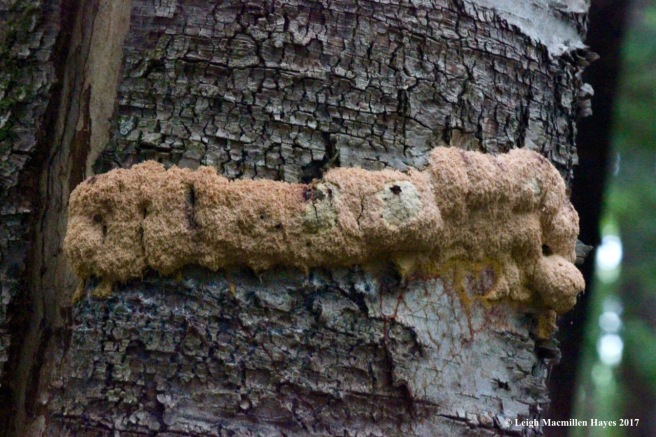 My best guess was a slime mold for it looked like the Son of Blob had arrived. She and I both touched it and the outer coating fell off. It was rather creepy.

At that point, we did a 180˚ turn and started out onto the quaking bog, literally, but a few in the front decided it wasn’t quite what they had bargained for since the water was especially deep. So, Alanna and Mary ventured that way and I joined the rest for a walk on the boardwalk, which was wet as well, but a bit more stable. Along the way, we spotted caterpillars actively consuming spirea leaves. Upon later research, I determined they were dark green fritillary caterpillars that will soon metamorph into those beautiful orange butterflies that we often mistake for monarchs. (Note: I spotted a monarch on milkweed not yet in bloom yesterday) 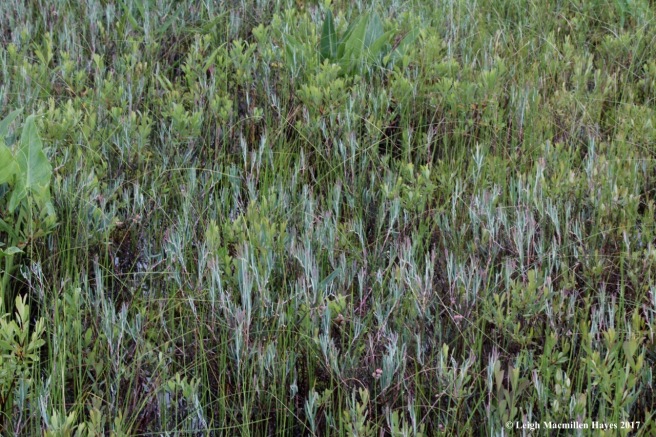 Among the many plants growing on the quaking bog, the bog rosemary stood out with its bluish gray leaves.

Newer leaves formed at the top, giving off a reddish hue and adding to their distinctiveness.

The netlike venation on the leaves was also noticeable and though the blooms have passed, the pretty pink fruits hadn’t yet matured into brown capsules. 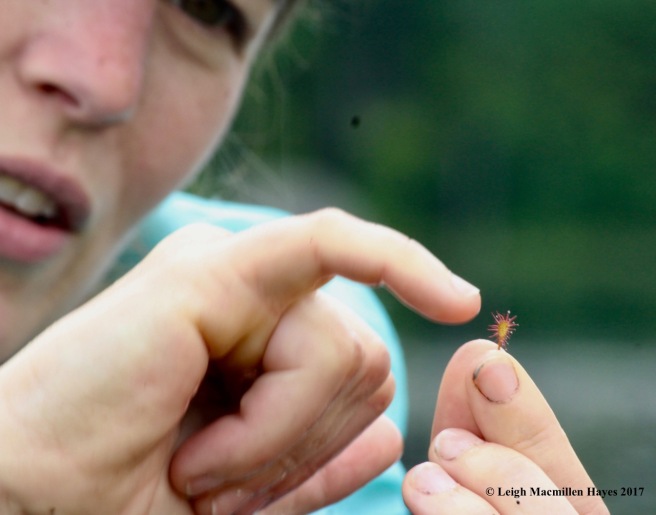 Since we’d seen the pitcher plants, Mary wanted to find the sundews that grew near the boardwalk. With the high water as a result of a beaver dam on the Muddy River, it’s been  hard to spot the sundews, but she persevered and located one, showing off its glistening tentacles intended to capture small insects. Should one land on the tiny leaf, the insect’s feet become ensnared in the sticky secretion and the end is eminent. Within mere minutes the tentacles curl around the victim and suck the nutrients out of it. 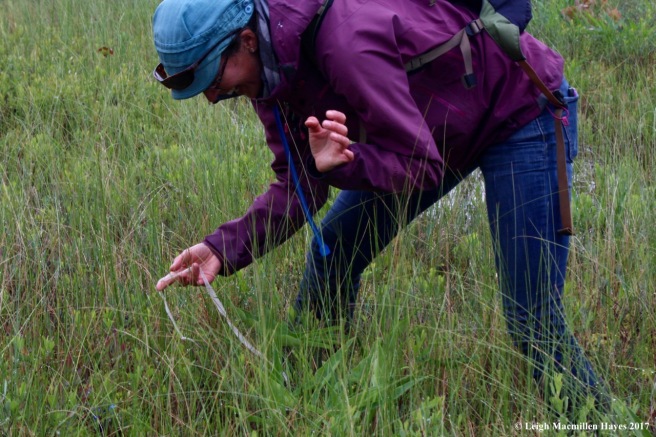 Meanwhile, Alanna continued to wander off the boardwalk and suddenly she discovered a shed snake skin. I had intended to join her, but I have to say that though I wore hip waders and my feet and legs were mighty dry, I could feel the bog quake with each step and I didn’t get far. Blame it on my camera, but I didn’t want to risk a fall. And do you know that squelchy sound of pulling a foot out of several inches of mud? That’s how it was when I tried to get back on the boardwalk. It’s not just a few plants that are carnivorous–it’s the entire bog.

Never fear. We all survived and she brought the skin back for us to admire.

We stayed on the boardwalk and trail as we finally looped back and still, there was much to see. The shrub that had stumped us when we first spotted the pitcher plant in the red maple swamp suddenly spoke its name and we knew we were looking at the fruits of the black chokeberry. Only a week or two ago we’d admired their flowers.

And then there was the berry that reminded us of a rose hip, as it should for it was in the rose family.

Its ripening pomes will eventually turn purplish-black. But . . . we spied something we weren’t familiar with at all–do you see the growth on one? It rather reminded me of the Son of Blob slime mold we’d seen earlier and must have been a gall. Nature certainly provides as many questions as answers. 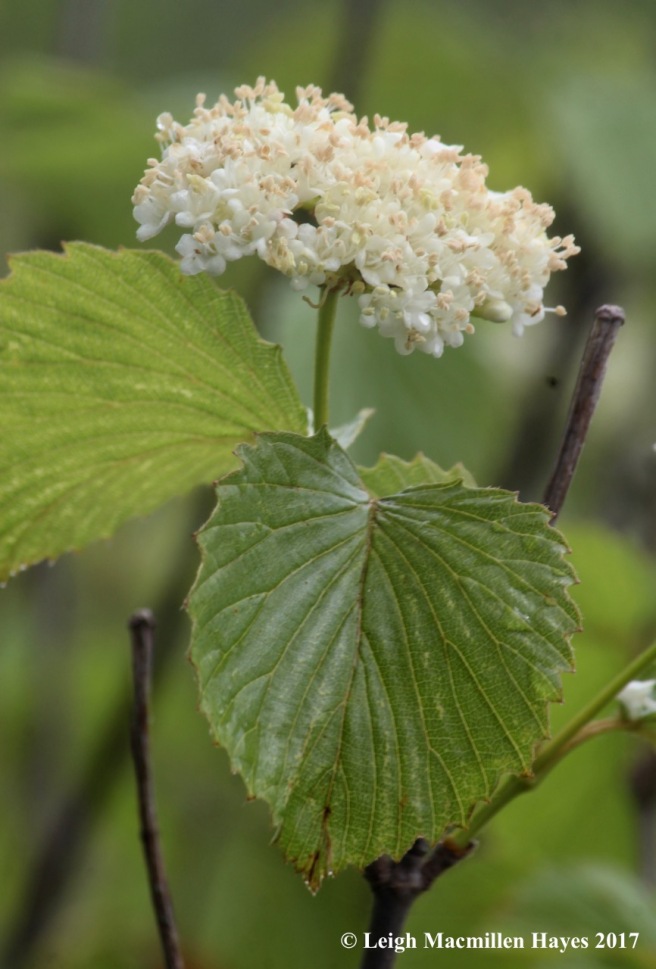 All spring and summer the flowers of the bog change by the week, or so it seems. This week, the Northern arrowwood was showing off its creamy-white blooms.

And the sheep laurel, its fuchsia-colored blossoms.

For three hours we oohed and aahed and had great fun. We made one last stop before returning to the parking lot for the spirit in the hemlock called out to us–seemingly doing its own oohing and aahing.

Such were the offerings of the preserve this morning. And the people who gathered . . . I only knew Alanna and Mary before we began, but because of our shared experience the group was quite chummy by the time we were ready to depart. That’s what I love about walks such as this where complete strangers become instant friends, even if it’s only in the moment.