When I donated a guided walk to a recent Lakes Environmental Association fundraiser, I was a wee bit nervous. Would anyone bid on it during the silent auction? And who might bid?

Thankfully, Carol notified me right away that she’d been the high bidder and my relief was immediate. I knew we’d have fun and the offer brought in a few bucks for an organization that has been near and dear to my heart for a long time. She chose the date, time and location. Plus she got to invite some friends along for the journey.

The chosen place–one of my favorites–Brownfield Bog. We started at the shack, where I pointed out Kathy McGreavy’s tiled map. Of course, they were wowed.

And then we followed a short spur from the parking lot for the first view of the bog and a great blue heron flew up and then settled again.

It was there that they first viewed a buttonbush. Or at least that it first made its presence known, for I think that so many things we see often and they blend into the landscape until that moment when our eyes are opened–and our minds as well. 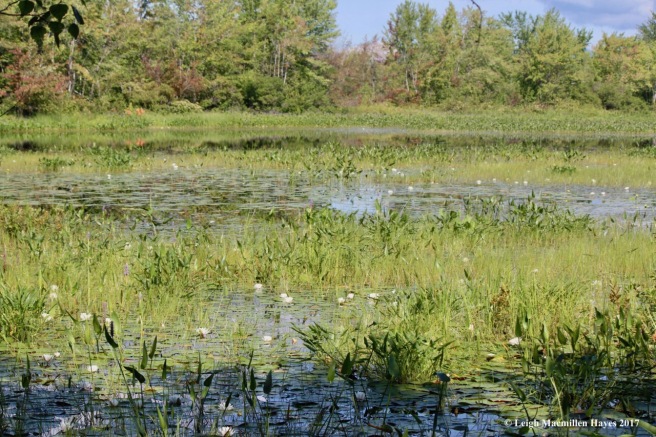 We followed another spur and noticed a sampling of fall foliage along the bog’s edge. In our minds it was swamp maple, aka red maple–or so we thought for a bit.

At a fork in the road, Carol, Marylou and Sara chose the left-hand turn and so we entered the land of the ferns. It was here that they began to familiarize themselves with royal, cinnamon, interrupted and sensitive–noting features in their forms to tell them apart. While we walked, and at times we walked quickly for the mosquitoes were ferocious, it was fun for me to listen as they quizzed themselves. 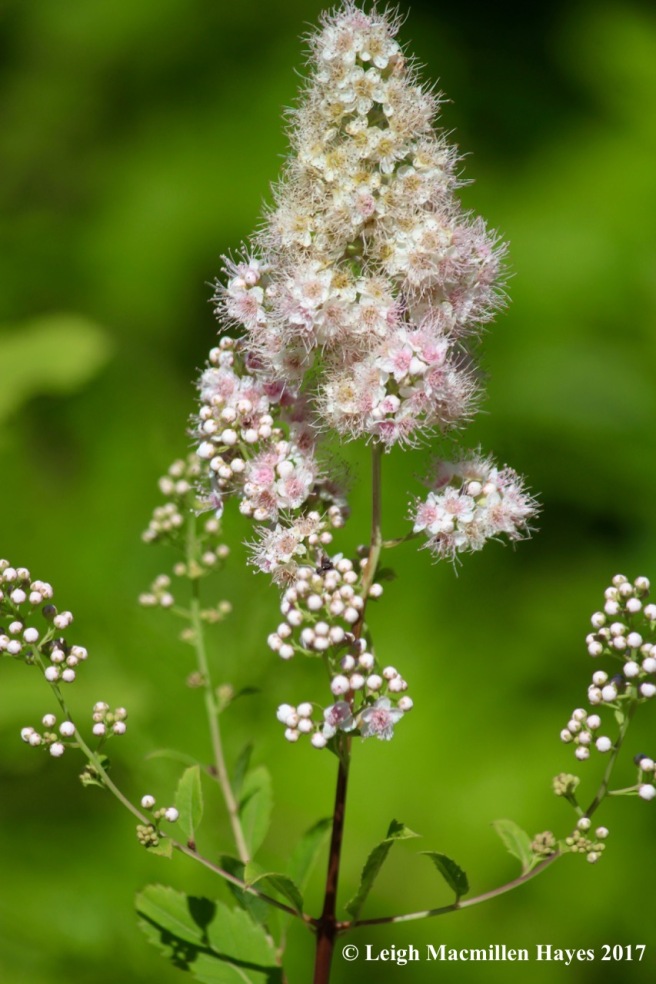 In a field at the end of the road, the spireas bloomed and we looked at the branching structure of meadowsweet with blossoms slowly opening in dainty clusters. 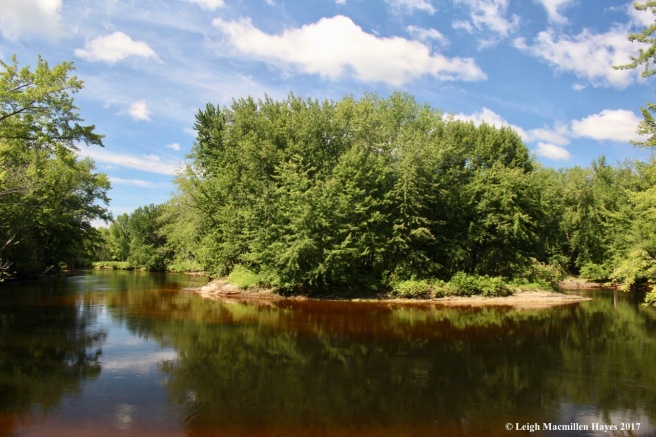 When we reached Pirate’s Cove along the Saco River, we paused for a bit.

It was there that Sara spotted a shrub I couldn’t identify until I arrived home and slowed my brain down.

The leaves were alternate and simple, with deep veins. But it was the color that stopped us–for it was a deep green, almost bronze on some. And we’d missed the flowers, but the fruits were spherical and when Sara opened one, she found three seeds. Turns out it was an alder-leaf buckthorn. And as far as I remember, it was the only one we spotted. But . . . as I said earlier, our minds were open and let’s hope it made an impact and the memory  lingers.

We finally left the river area and as we started back on the road, they asked me to name a flower. I knew when I said its name I was wrong, but I couldn’t pull the real name out of the depths of my brain. So here ’tis–yellow loosestrife. 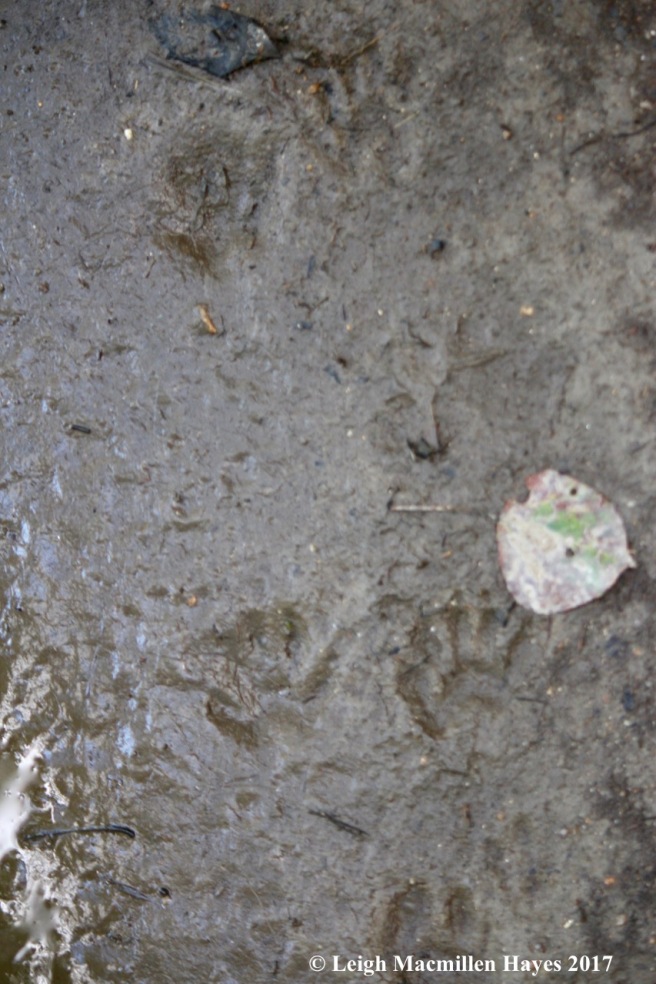 Making our way back to the main road through the bog, we saw handprints in the mud and knew a raccoon had passed before. 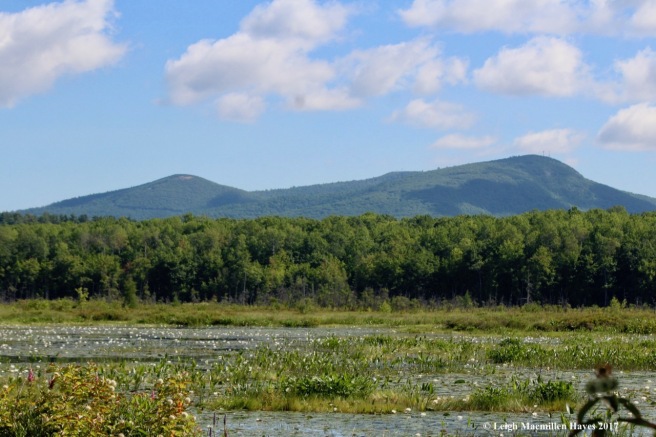 Back at the intersection, we turned left and journeyed on, noticing all the pickerelweed and water lilies at the lower layer and changes in vegetation leading all the way to Pleasant Mountain. 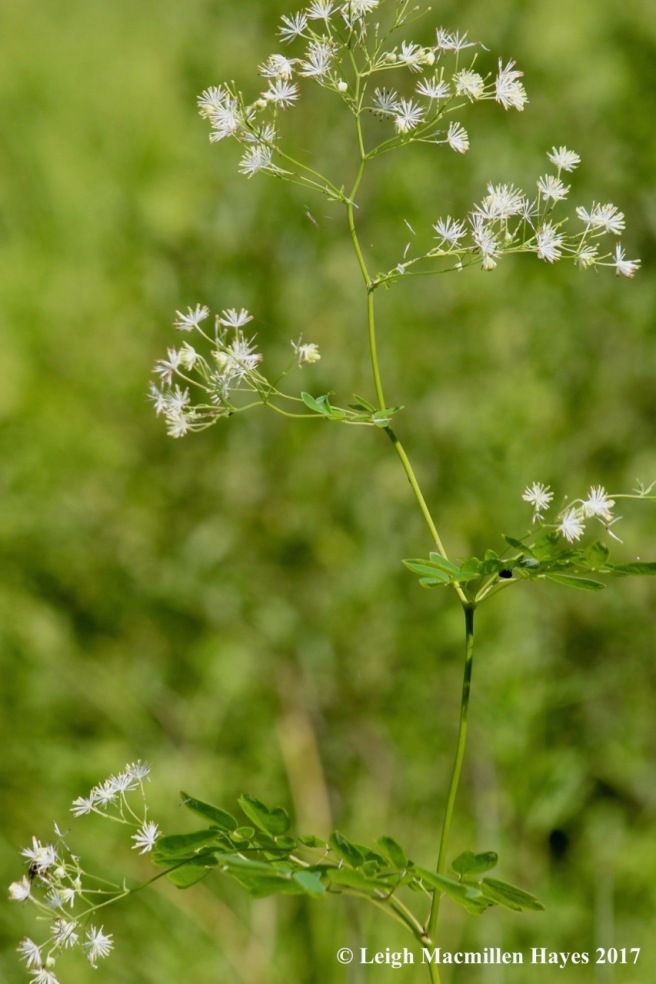 It was along this route that we stopped most often, sometimes for things we knew like meadow rue

and the other spirea, steeplebush–these presenting several renditions of the same theme.

We spied an elm tree and reminisced about elms of the past. 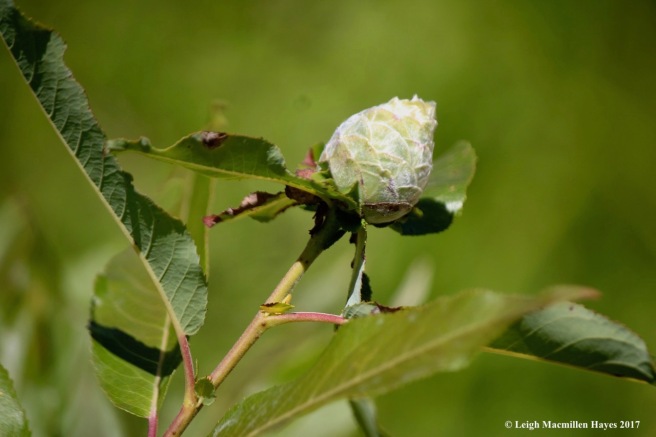 And then a few willow galls shaped like pinecones called to us. This was a new one for them and though I couldn’t remember that the creator was a midge larva, the gall struck them as being a fruit, especially as we broke it open. Had we opened one in the winter, we might have seen the maggot nestled within a chamber at the center of the structure. In the spring a female midge fly lays a single egg in a terminal bud, initiating the gall formation through a chemical reaction causing the leaf tissue to harden into the shape of scales. 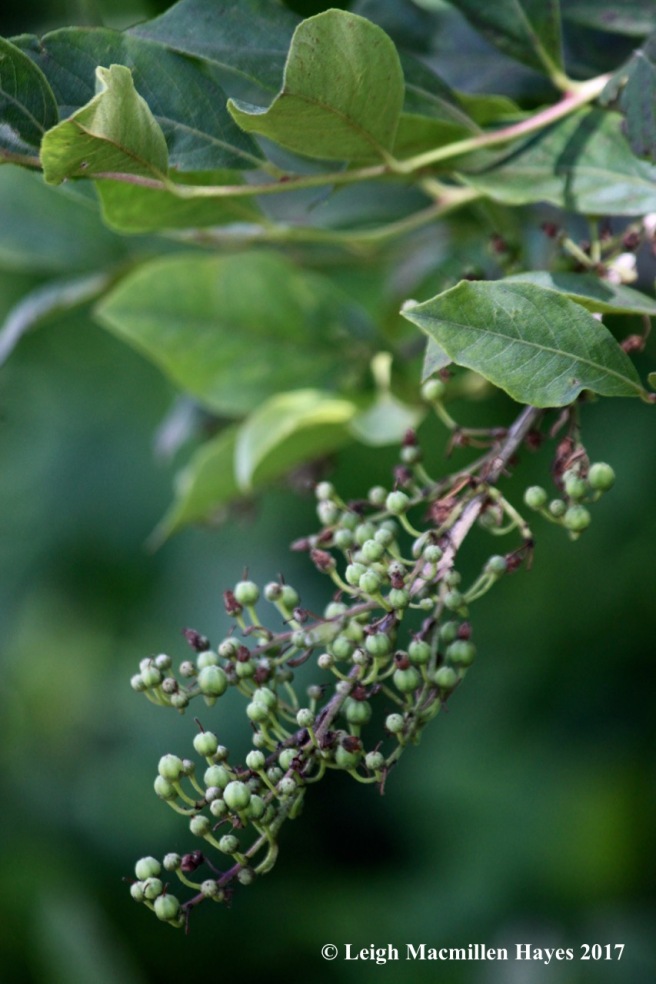 I got stumped again when we kept seeing fruits on long stalks, with last year’s growth among the offering. 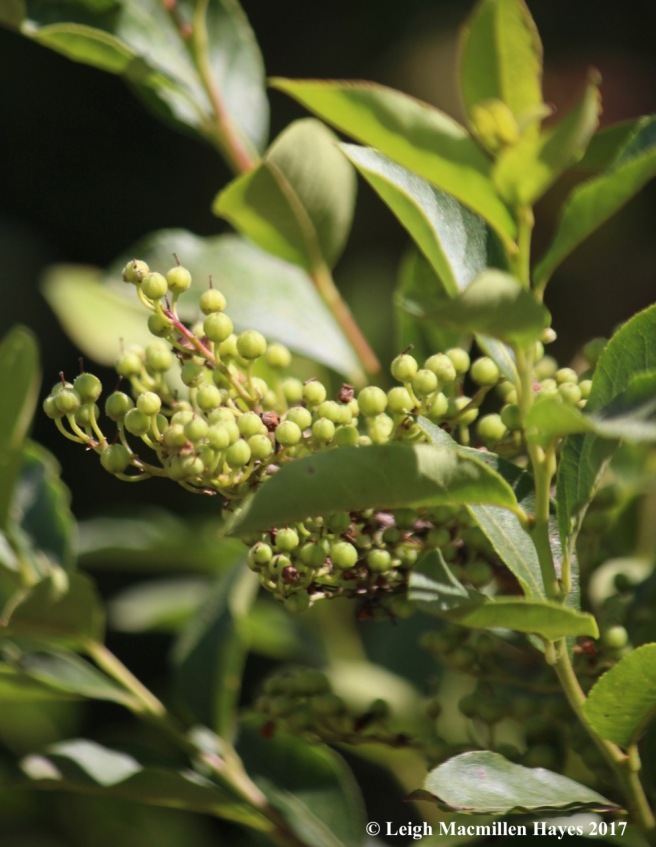 Once at home, I spent some more time with Michael L. Cline’s Shrubs of the Northern New England Forest, and realized it was a maleberry.

Another shrub that was plentiful throughout our journey was the witherod, aka wild raisin, its fruit ovoid in shape, turning blue as they withered.

Adding a splash of fuchsia along the way, swamp milkweed with its upright umbels.

And then the other color that we’d noticed along the perimeter of the bog earlier and thought was red maples. Turns out those trees are silver maples and the ones with the wettest feet seemed to have already shut down their sugar production, thus allowing anthocyanin to form. This happens when sugar gets trapped in a leaf after the chlorophyll is gone and the leaf is exposed to sunlight–the resulting color being reds and purples.

As hot as the day was, these presented a taste of the future. Some years they seem to turn earlier than others and this seems like one of the early years.

At last we reached a turn-around point and these three amigos posed for a photo–Sara, Carol and Marylou.

Of course, we only walked a few feet on our way back when high bush blueberries begged to be noticed. And gathered. And eaten.

Our journey back was much quicker, but still we stopped occasionally. Again I was stumped when one in the party spotted this vine. Turns out its the vine and fruit of carrion flower–one that I had never heard of before. (You know what that means.) According to Newcomb’s Wildflower Guide, the green flower is ill-smelling, apparently giving rise to its common name.

Though the mosquitoes were plentiful, more so at the start than the finish, we didn’t see too many dragonflies and I’m not sure why. But this female yellow-legged meadowhawk did pause briefly.

Back by my truck, we stopped again. While Sara went in search of the white and red oak trees and their different leaves, Carol and Marylou studied Kathy’s map as they figured where we’d traveled.

It was a glorious adventure–for me anyway. A casual ramble filled with good cheer and conversation. Thank you, Carol Nugent, for your generosity in support of LEA to make this wander possible. I hope the three of you enjoyed our time together as much as I did and took some of Brownfield Bog home in your hearts.

2 thoughts on “A Generous Wander”