Because they are so gracious, when I recently begged Faith and Ben Hall for an opportunity to follow them on a trail through the Perley Mills Community Forest, they not only invited us to walk, but planned out an intinerary, pre-hiked the trail, made chicken noodle soup for lunch and took us for a boat ride. All of this before the great solar eclipse of 2017.

After taking a tour of their neighborhood, Faith dropped Ben, my guy, and me off to begin our first bushwhack beside Perley Pond. In a few minutes, we came upon an earthen structure and I couldn’t help but wonder if it was an old beaver dam. 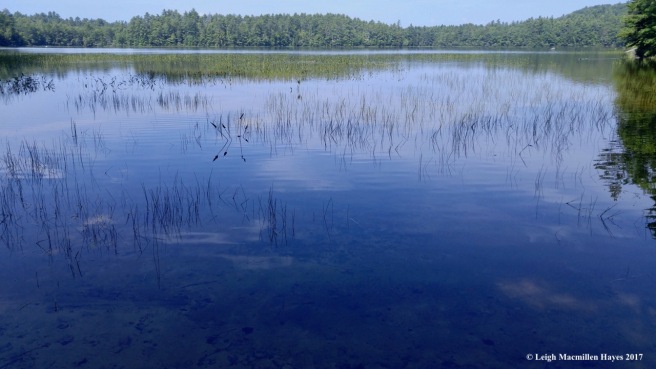 We were at the base of the pond and perhaps just as those who dammed it up for their mill sites, the beavers had their own intentions. Of course, I could be totally off and it could have been manmade, but such was the formation and growth above, that I’m sticking with my original thought.

Moments later, we emerged into a clearing and grabbed handfuls of fine saw dust, letting it sift through our fingers as it slowly drifted back to the ground. Occasionally, on our tramps through the woods, we’ve encountered such mounds and have been amazed that they still exist with little vegetation.

The mound bespoke the reason for the mill up ahead. (Notice the stream beside–we crossed over it, two of us more successfully than the third, but fortunately for him, I didn’t take a photo. He preserved the rest of the hike with soaking wet pants, socks and boots, but never complained, such is my guy. Oops–don’t tell him I told.)

Climbing up, we looked down. According to the “History of Perley Mills” by Arthur Rankin on the Denmark Historical Society’s website, the part of town known as Perley Mills was “1st settled by a family named Cliffords in the early 1800s. They built a road by Little Pond to connect with the stage road from Denmark to Ingalls Road and Cole Road in South Bridgton and to Biddeford. The Cole Family had apple trees. Mr. Cole was a fiddler and he used to play for the dances in Denmark and Sebago. Mr. Wallis Berry purchased the Cole farm. About 1807, Mr. Berry and Mr. Perley built a dam at the outlet of Pickerel Pond. They built a saw mill to saw staves and shingles. They made barrels. They employed many men.”

We weren’t sure exactly what we were looking at below, but pieces of the former structure remained intact in what looked like a sluiceway.

The stone had been split using the feather and wedge technique.

As we looked back, I was once again reminded of the work that went in to creating the foundations of yore.

Our bushwhack included a few other fun finds, such as a small patch growing in an unexpected place.

The little green balls actually threw me off when we first looked at them. 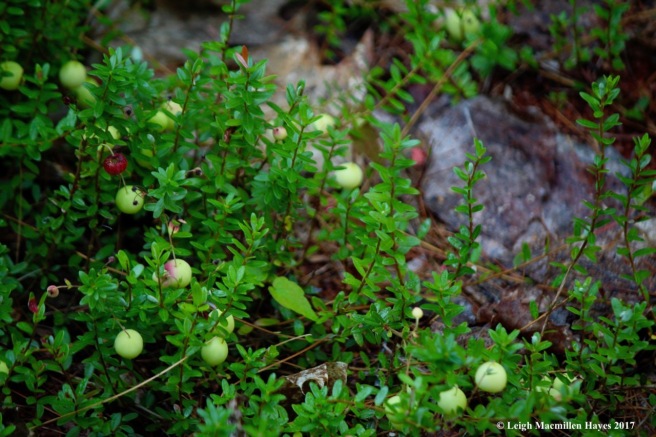 But it was my guy and his well-trained naturalist eye that knew they were cranberries.

We also spied a clump of Virginia meadow-beauty with its delicate petals and prominent stamen. It’s also known as Handsome Harry, but I think Harriet would be more fitting. 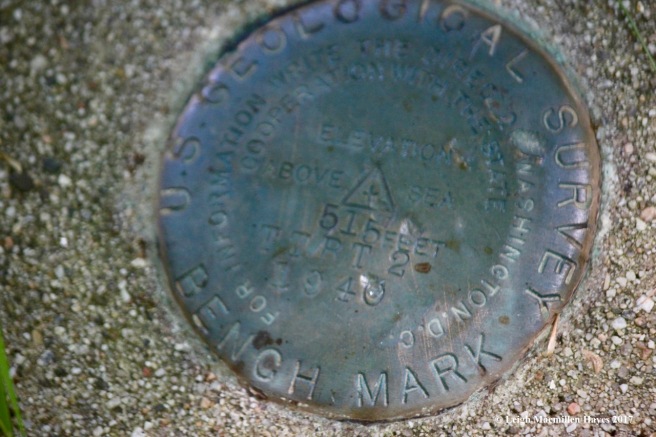 When we reached the Narrow Gauge Trail, Ben showed us the elevation maker that neither of us recalled seeing previously. 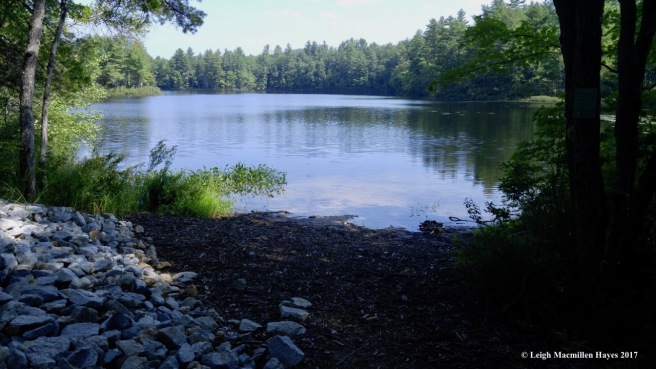 We stood beside the pond for a few minutes, looking for frogs. 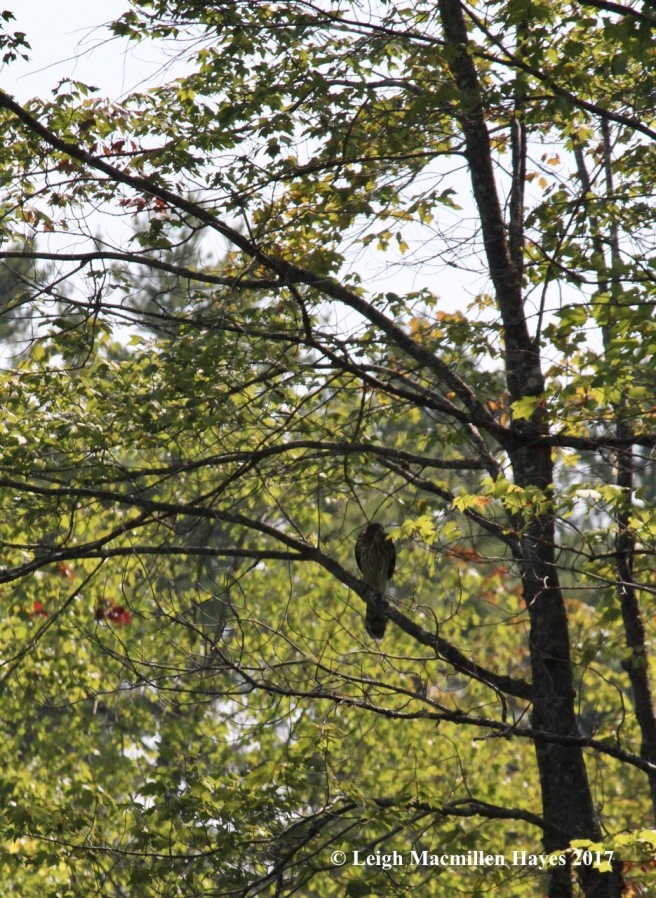 And realized we weren’t the only ones on the hunt.

As our journey continued down the old rail bed, we all wondered about the work that went into building it. Years ago, we used to find railroad spikes, but the trail has been improved recently and that seems hardly possible any more. Instead, we found gall of the earth in flower, 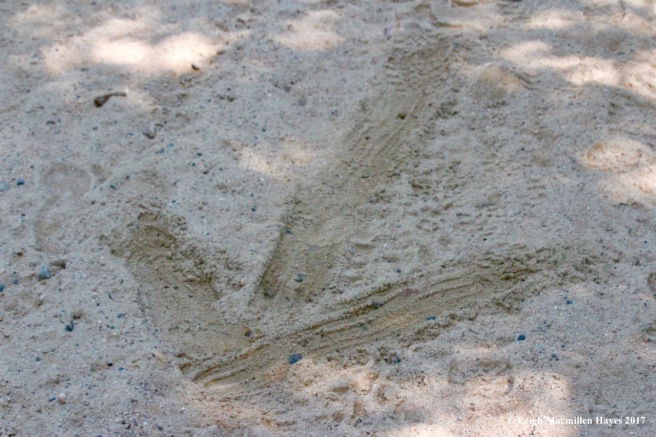 and either one large turkey print or a message in the sand. We knew it was the latter for Faith had preceded us and as we passed her she mentioned she’d left a note.

It wasn’t long after Faith’s message, that Ben veered off the rail trail and took us up an old logging road.

We followed him through thick and thin, the thickest being where the goldenrods bloomed and bees buzzed in former log landings. 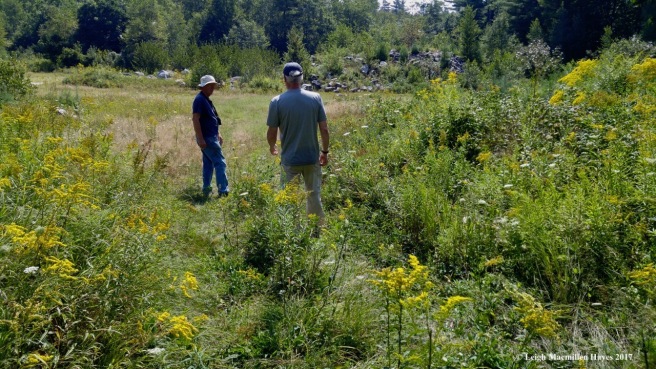 Along the way, he spoke of a stone cemetery. We both conjured up images of an old cemetery reflecting an earlier time. But . . . he meant a large pile of rocks that had been dumped by a previous owner who had logged the area. 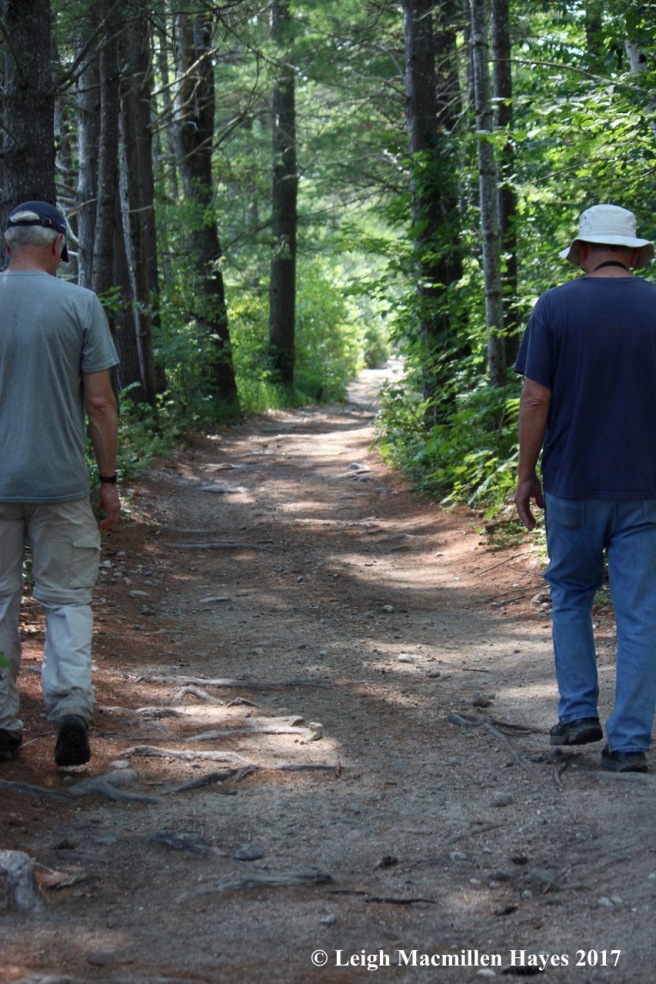 Eventually, we met up with Faith again, then she drove to our next meeting point, while the three of us walked the Narrow Gauge in a direction my guy and I had never traveled. 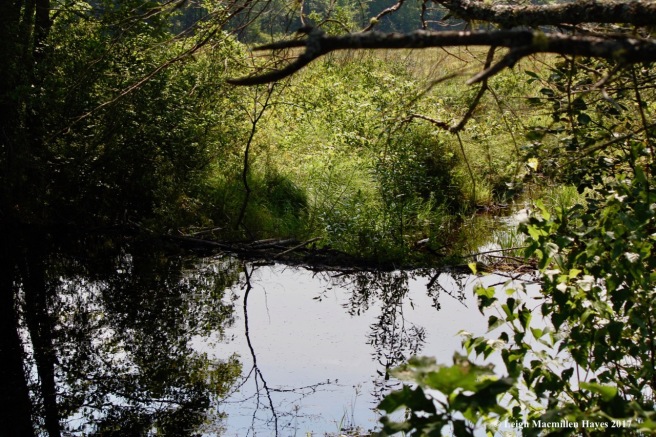 It was there that we saw beaver works we were certain of, including a dam that created an infinity pool above.

Beside a swamp, we kept searching for moose, but never spied one.

At last our journey by foot came to an end . . . almost. Faith had a surprise waiting for us. And so she drove us back up their road and just past their house pulled off to the side on land owned by their oldest son. We’ve explored that property with them previously, but today she wanted to show me one of my favorite plants, which also happens to be hers.

Thistle . . . in all of its forms, it deserves reverence. 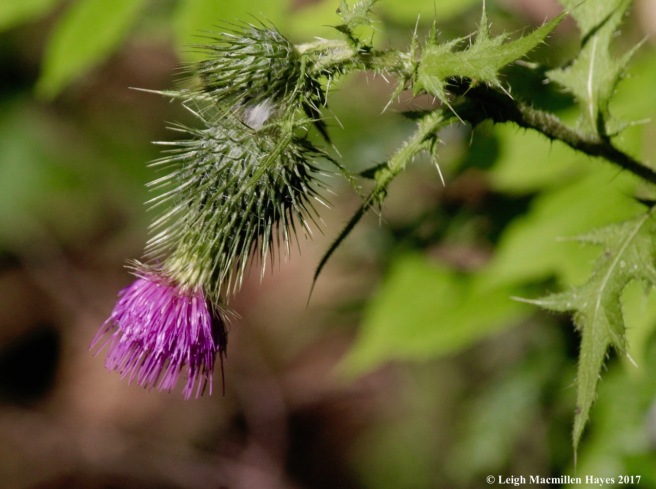 And so we revered.

Back at their camp, our time together wasn’t over for we broke bread. And then they offered a quick boat ride. On the way to the dock, we knew we were in the right place, such did the signage on one bucket indicate.

Out onto the pond we went, thankful for a few more minutes with Ben and Faith. We cherish any time spent in their company before they head south again. And today, we were also excited to explore our local area and visit places we’ve never been to before. Thank you both for everything, from the hike to thistles to lunch and the boat ride and all the conversation in between.

Before we departed, we had one more stop to make–at Ben’s sand table, where he recreates the natural world with found rocks.

Today’s creation–a red squirrel devouring the seeds of a white pine cone as the moon covered the sun–an artful eclipse on this Mondate.