This morning I donned my raincoat, slipped my camera strap over my head, and met up with LEA’s Education Director Alanna Doughty for our reconnaissance mission along Stevens Brook in downtown Bridgton. Our plan was to refresh our memories about the mill sites long ago identified and used beside the brook. 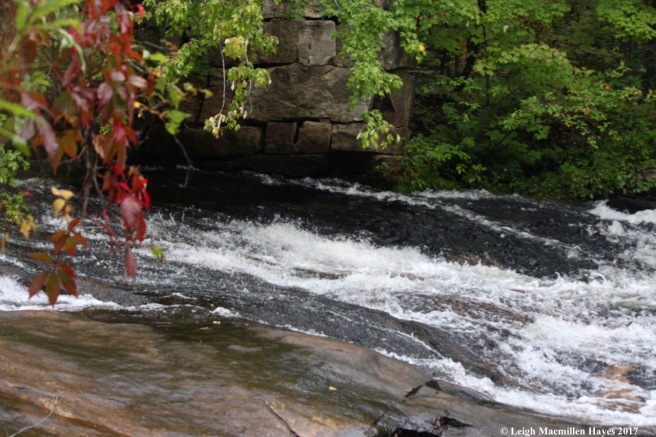 We skipped the first mile of the trail and slipped onto it from the Route 302 entrance by the Black Horse Tavern, knowing that that will be our entry point for a walk we’ll lead with Bridgton Historical Society‘s Executive Director Ned Allen later this month. Alanna suggested I not pull out my notecards, and rather rely on my memory. Oh my.

As we made our way past the old trestle that once carried coal from the Narrow Gauge railroad to the Pondicherry Woolen Mill at the fourth power site (the other three are located between Highland Lake and the 302/117 intersection), we recalled that the now deceased Reg Fadden used to claim he knew the color of dye because as he walked to school each day he noted the color of the water. Scary thought.

At the fifth power site, we went off trail to look around a bit. The water flowed over the rocks with such force that sometimes we couldn’t hear each other.

Before us was another former trestle spot–this one being part of the track that carried the train across the brook and on toward Harrison as part of a spur from the main line. 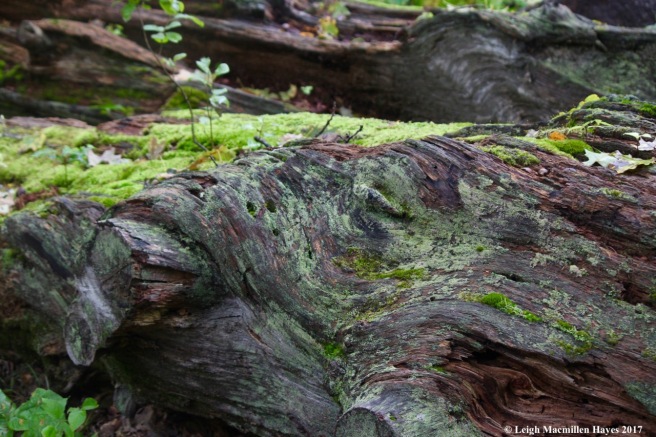 In front of it, large trees placed years ago to prevent anyone from crossing the now gone trestle, served as a nursery to many species. But it wasn’t just what grew there that gave us pause–it was also the textures and lines that seemed to reflect the water below.

As we walked, we looked at the lay of the land and wondered about mill ponds and berms. We also noted the one plant we wanted to avoid–poison ivy. 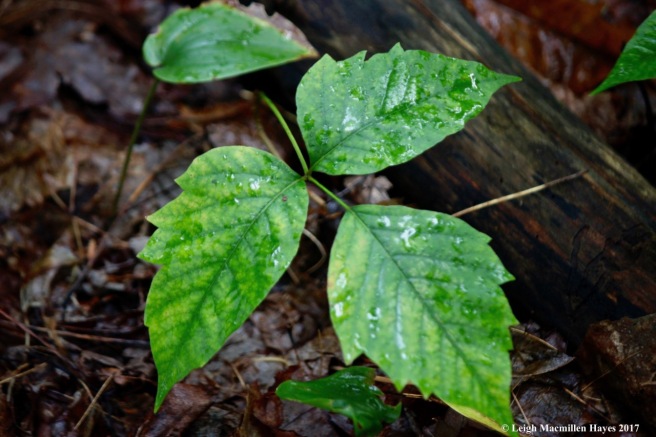 It grows in various forms, but the safe thing to know is that the two opposite leaves have short petioles that attach to the main stem, while the third and leading leaf has a longer petiole. As the saying goes, “Leaves of three, leave them be.” 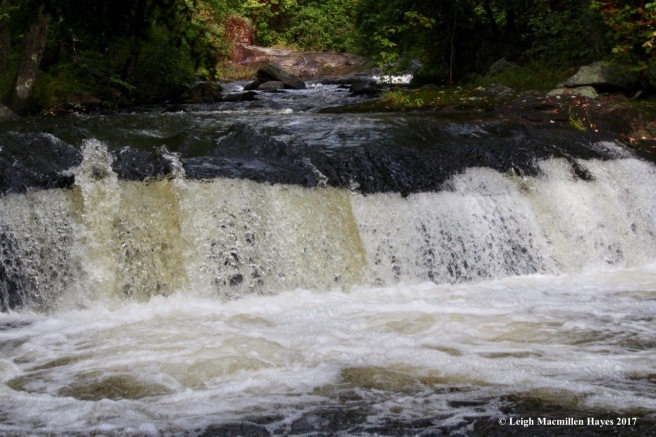 Site number six is one that we’re not sure we’ll share on our public walk. It’s a wee bit of a challenge to get to and was apparently never developed–though we did note the drop and some stonework on the far bank.

Before we stepped onto Smith Avenue for the next site, a goldenrod shouted for attention. We tried to figure out how many rays it had, but as it turns out, that number can vary from three to five. The flowerhead formed a ladder that climbed up the stem and this is one that we should recognize going forth for its display struck us as being different than other goldenrods. We’ll see if we actually do remember it the next time we meet. 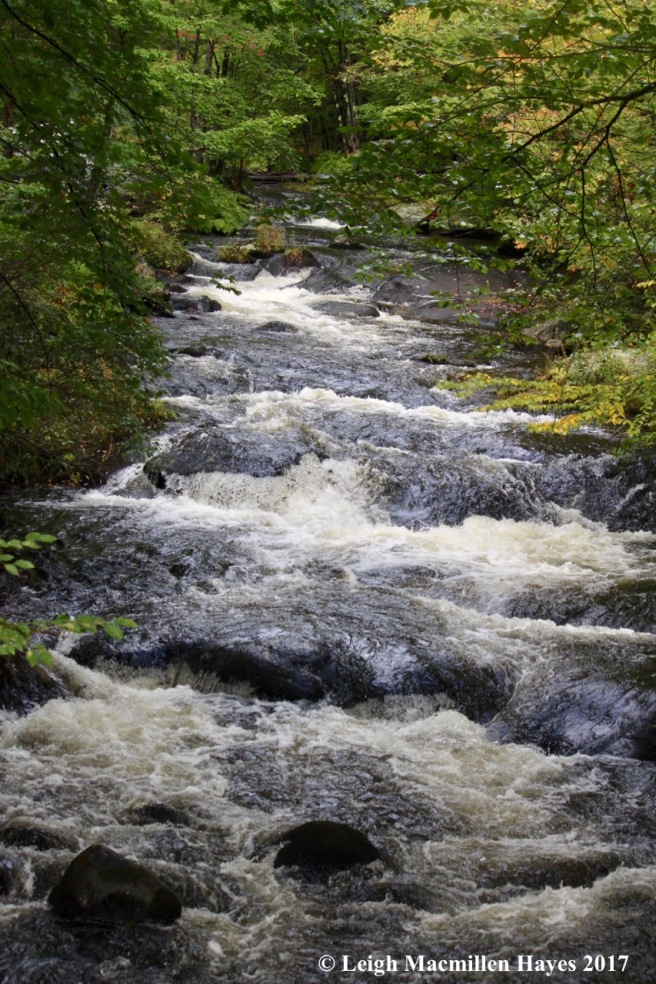 As is often the case, it took us about an hour to walk a half mile. At last we emerged onto Smith Ave, by Lower Johnson Falls. The curious thing would be to note which was faster–the water or us. I have a feeling the water might win, but perhaps another time we should test that theory.

For a few minutes we watched and listened and took in the view of the only mill still standing. I suspect this building was constructed in the 1860s as a sash and blind factory. Eventually it became the coffin shop, where Lewis Smith, the town’s first undertaker, built furniture and coffins.

For about a tenth of a mile we walked down Kansas Road and then slipped into the woods again. I think this site is my favorite–site 8 and former home of the Forest Woolen Mill. There were actually two Forest Mills, one on either side of the road and connected by an overhead walkway. 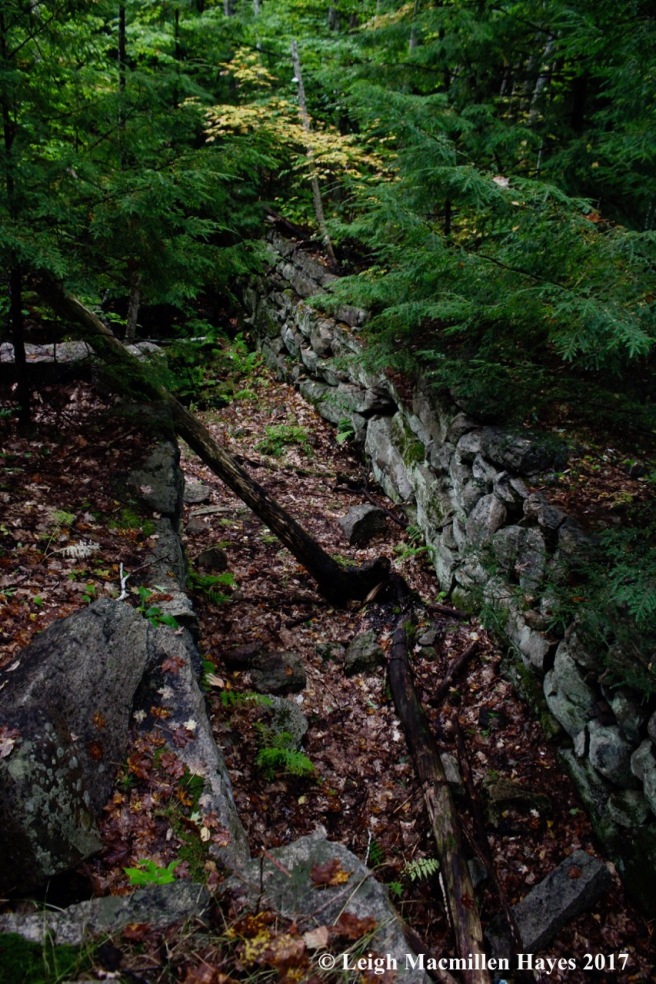 Today it was the sluiceway that drew most of our attention. First we looked down.

And then we climbed down–paying attention to stones, bricks, cement and rebar, all necessary to build a foundation that still stands today.

Well, most of it still stands. We were awed by a piece that appeared to dangle at the edge of the sluiceway.

And a root that wound its way around the same cement stanchion . . .

which happened to provide the perfect growing conditions for a hemlock. 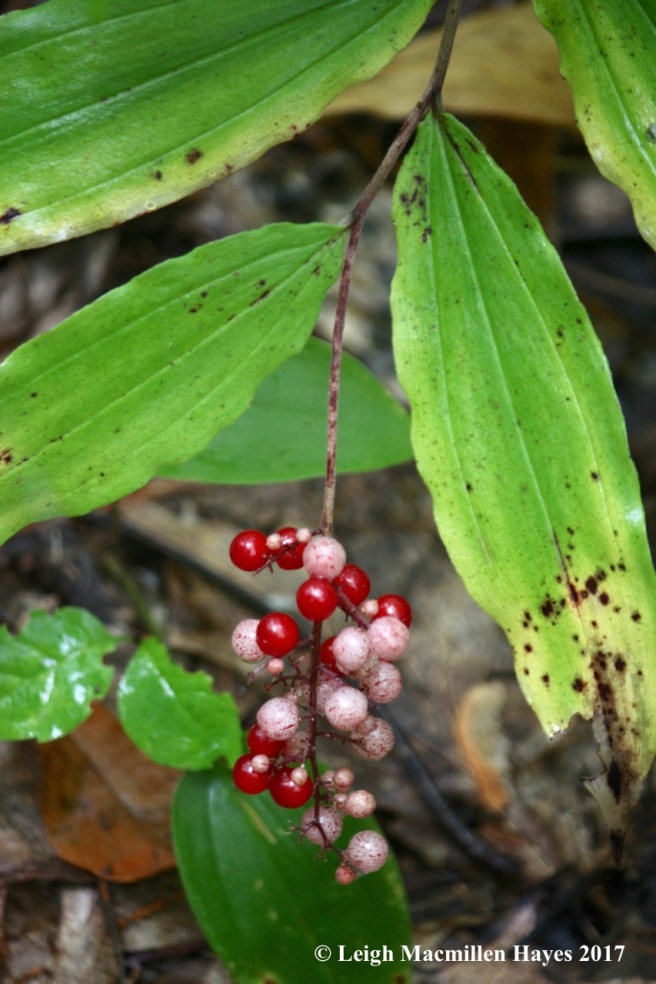 Crossing Kansas Road again, we ventured on. In a section under the current power lines we found flowers a many. The fruits of the false Solomon’s-seal looked like miniature strawberry and cherry-vanilla candies. 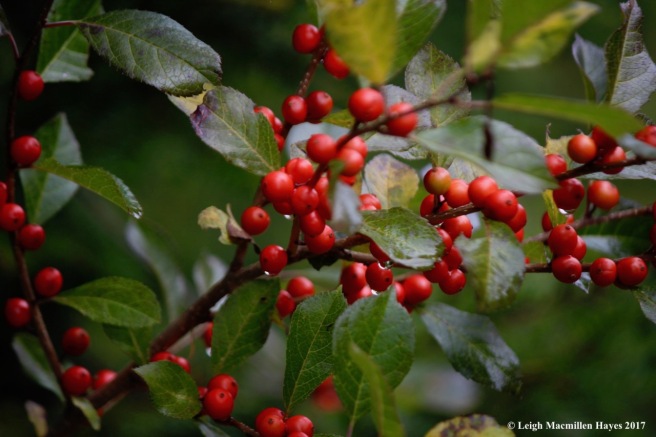 As we stepped onto a boardwalk across a wet area, winterberries glowed red and reminded us that the cold season isn’t all that far off. 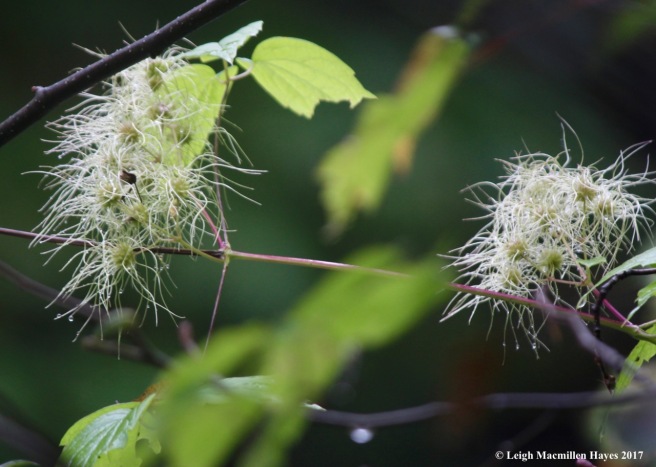 It was there that we spied the feathery-fruited plumes of virgin’s bower,

But our favorites: a cardinal flower still in bloom and . . . 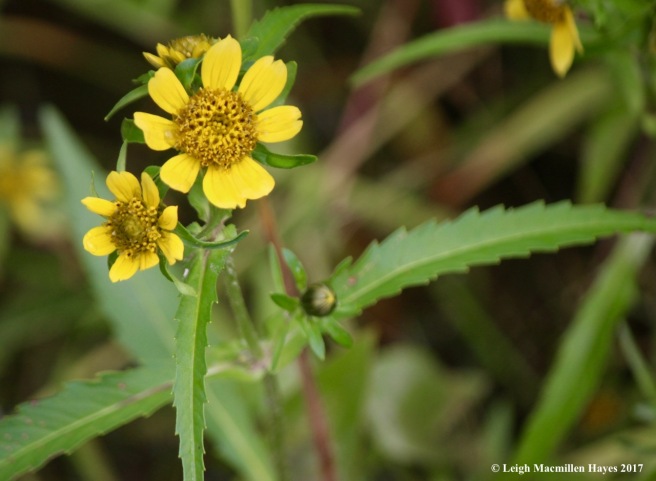 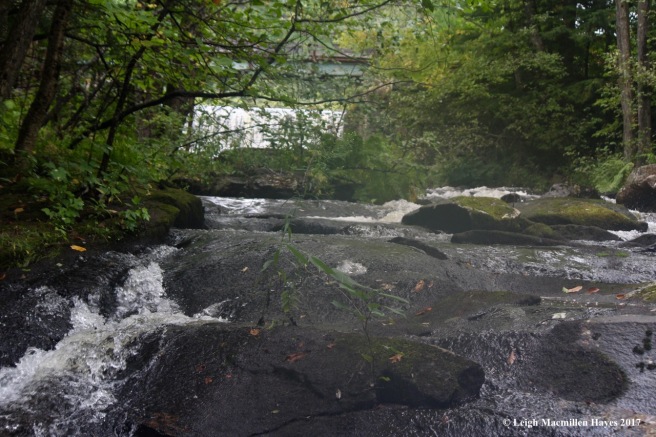 We passed by the tenth power site, knowing we’d return to it on our way back. Instead, we stood below and looked up at the water flowing over the improved dam. 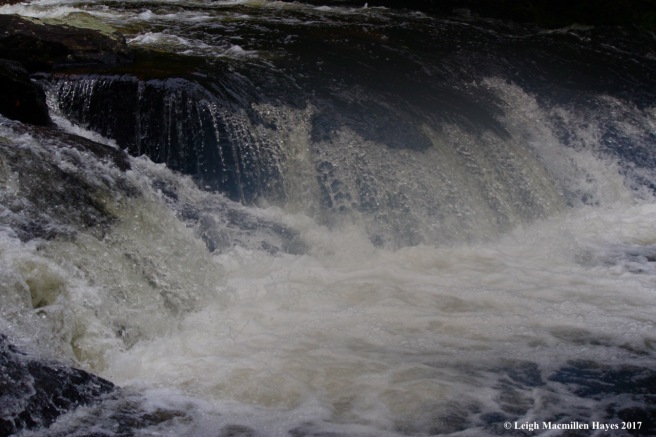 It was in this section that the brook dropped 25-30 feet and created the greatest power at one time. It was also here that the eleventh site was located and where a penstock once provided a way to get water to a powerhouse in order to furnish local homes with electricity.

For us, it was a place to make more discoveries and share a laugh as we looked at the huge leaves of skunk cabbage.

We also spied the first witch hazel flower of the season . . .

and a maple-leaved viburnum showing off its subtle fall colors. 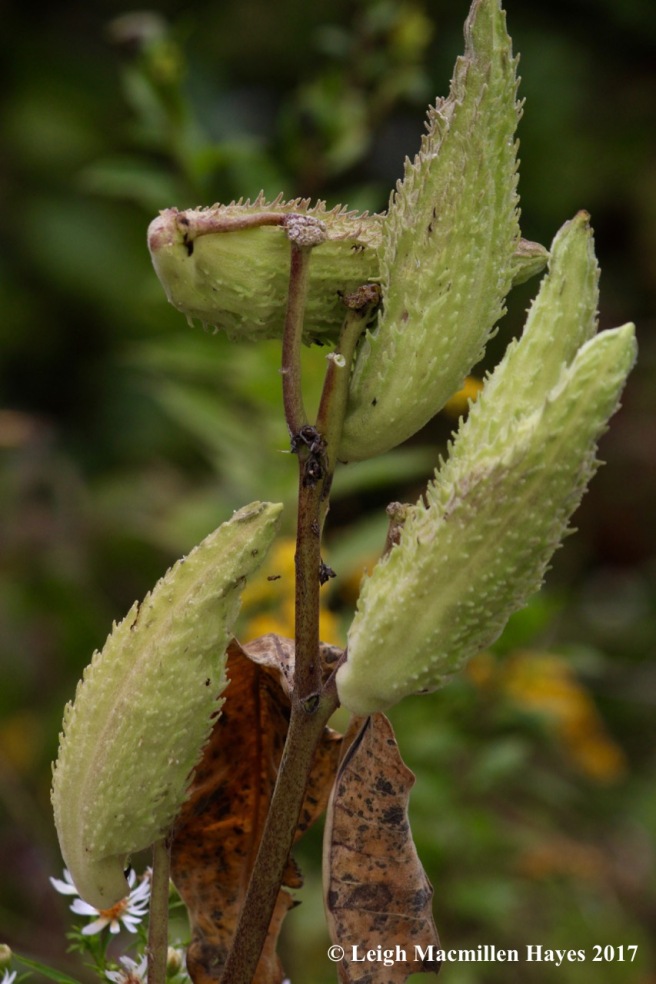 In a spot just above the Central Maine Power substation, we found a garden of wildflowers including milkweed seed pods and . . . 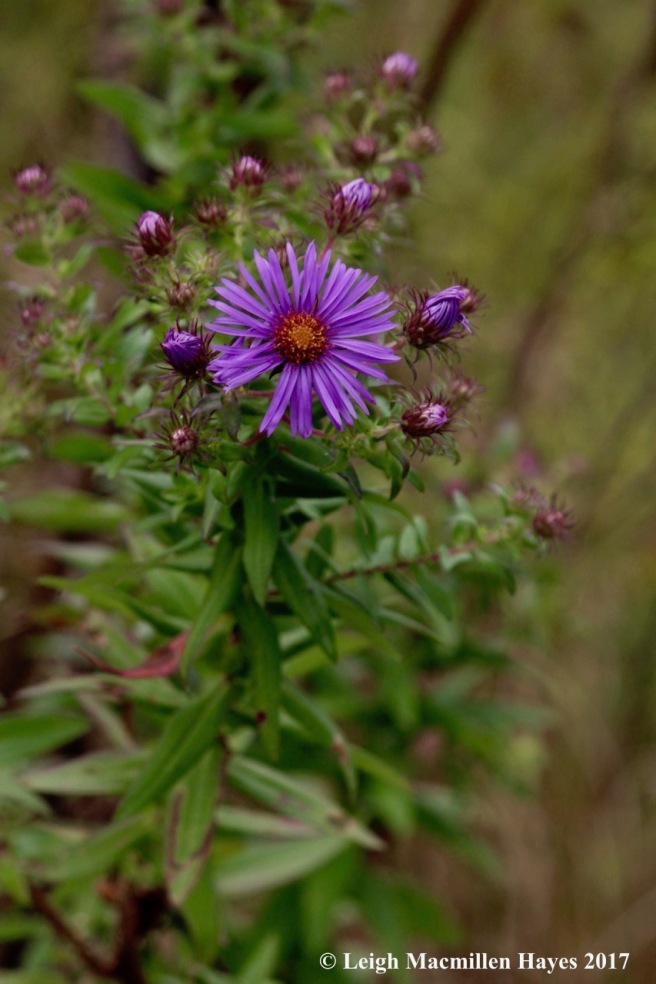 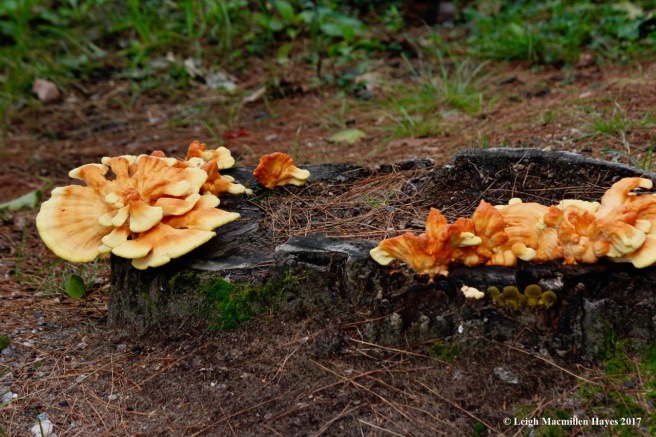 We also found some chicken of the woods.

And fruiting on the same stump, what I think was honey mushrooms (Armillaria mellea). I know a few fungi experts who occasionally read this, so I know they’ll correct me if I’m wrong with my ID.

The second half mile took us just as long as the first, and at last we reached the outlet into Long Lake.

And then we made our way back, crossing over the bridge at power site 10, which was possibly the spot where Jacob Stevens, for whom the brook was named, built the first sawmill in 1768. We do know that in 1896, the Bridgton Water and Electric Company acquired the site and improved the dam. Eventually it passed on to the Western Maine Power Company and then Central Maine Power. In 1955, it was transferred to the Bridgton Water District. Through all the time, we could only imagine how the reflections changed. 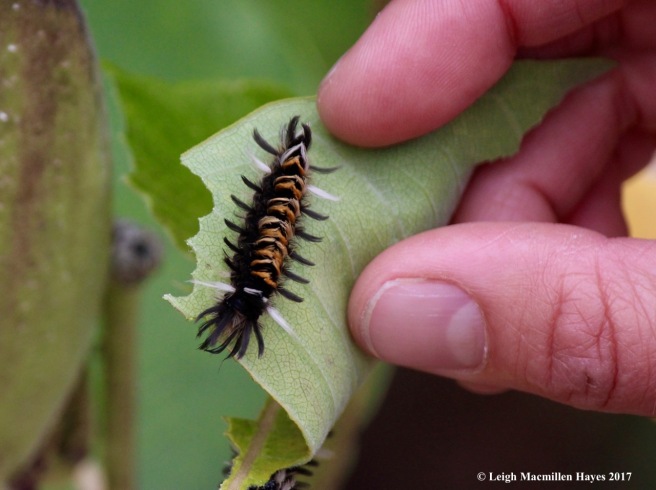 To save time, we decided to walk along Lower Main Street as we made our way back. And to that end, our discoveries continued, for on a milkweed, Alanna first saw the chewed leaf and knew to look for the milkweed tussock moth caterpillar that was filling its belly. 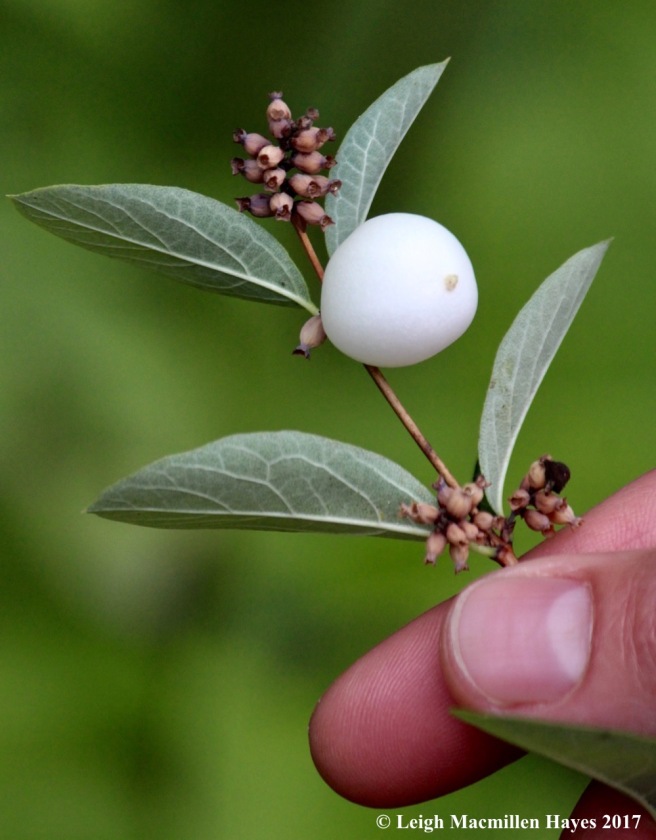 We also saw what I’ve always referred to as popcorn shrub because it reminds me of such, especially when I’m hungry for lunch. But really, it’s common snowberry. And not edible.

And then we found a tree that I didn’t know grew there–and I can’t tell you how many times I’ve run or walked by it: a northern white cedar with its scraggly striped bark.

As much as the bark, I like the overlapping scale-like blue-green leaves.

All in all, our one mile journey took us just over two hours and we did recall some of the info about the mills without referring to my notecards. But what was even more fun was our wonder and awe as we made new discoveries while poking along beside Stevens Brook.

If you care to join us, the talk by historian Sue Black will be on Wed, September 27 from 5-7pm at LEA’s Maine Lake Science Center and the walk will be the next morning from 9-11. We’ll meet at Bridgton Historical Society on Gibbs Avenue for that. Be sure to register for either or both by contacting Alanna at the following address: alanna@leamaine.org.

7 thoughts on “Poking Along Beside Stevens Brook”