Our favorite Monday mornings begin with my guy unscrambling the Jumble words in the newspaper, but leaving the final answer cells empty so I can give it a try, me decoding the cryptoquip, and both of us solving the crossword puzzle. And then our day can begin. 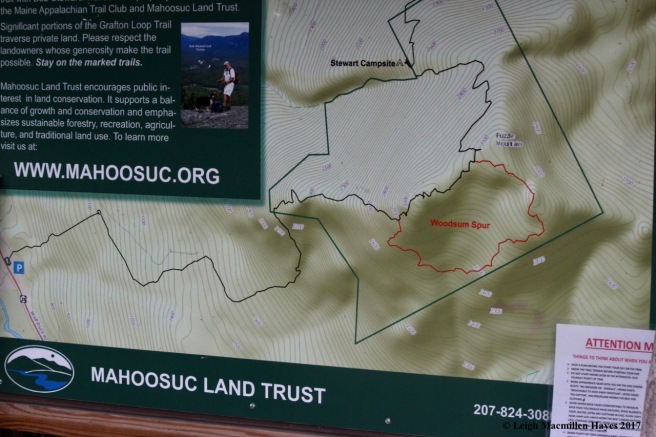 And so it was this morning before we drove an hour north to a Mahoosuc Land Trust trailhead on Route 26 in North Newry. Our plan was to climb the trail to the summit and then make our descent via the Woodsum Spur before connecting back to the main trail. We figured we’d finish up about 3:30pm. 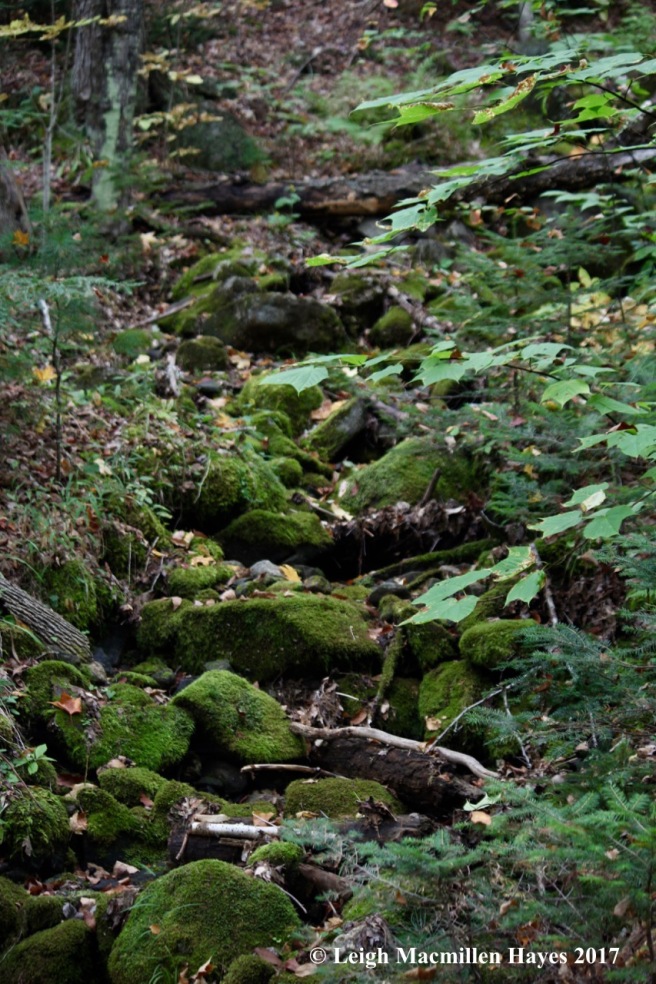 And so we began our climb, crossing six or seven dry streams, where not even a trickle pleased our ears.

But our eyes knew otherwise for we were in a beech forest and scratch marks were prevalent.

In spite of the nectria caused by beech scale insects and others, we spied a familiar pattern that always thrills us. Our first puzzle teaser–do you see the pattern we saw?

Without going off trail, the bear paw trees were plenty and our quest for such satisfied.

Our questions, however, continued beyond the bear trees. How did this beech leaf happen to be dangling in suspended animation?

Why did we find only one jack-in-the-pulpit? 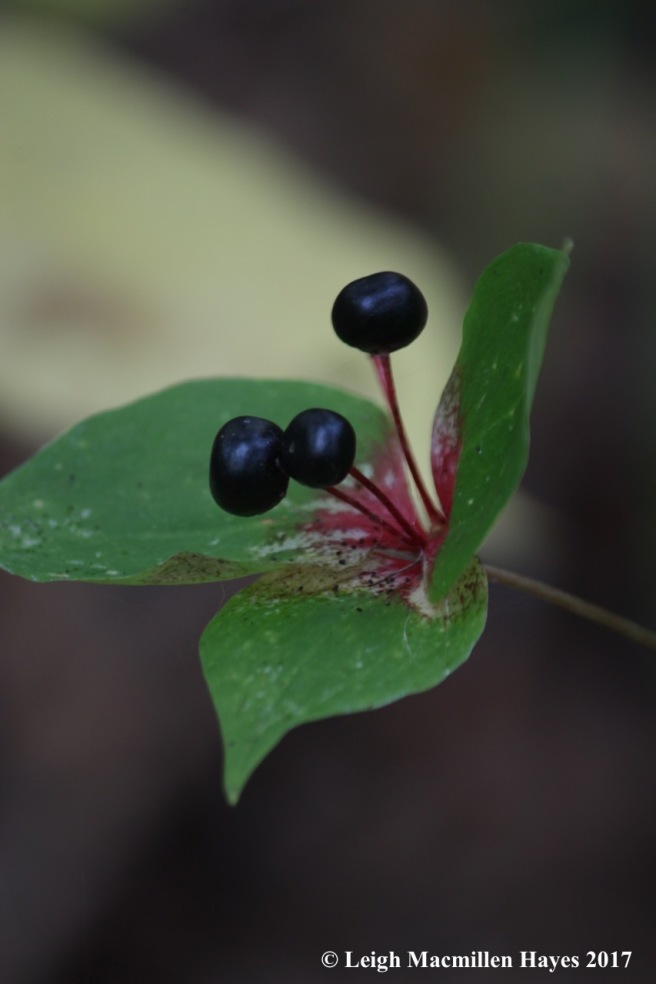 What is the purpose of red on the Indian cucumber root leaves? 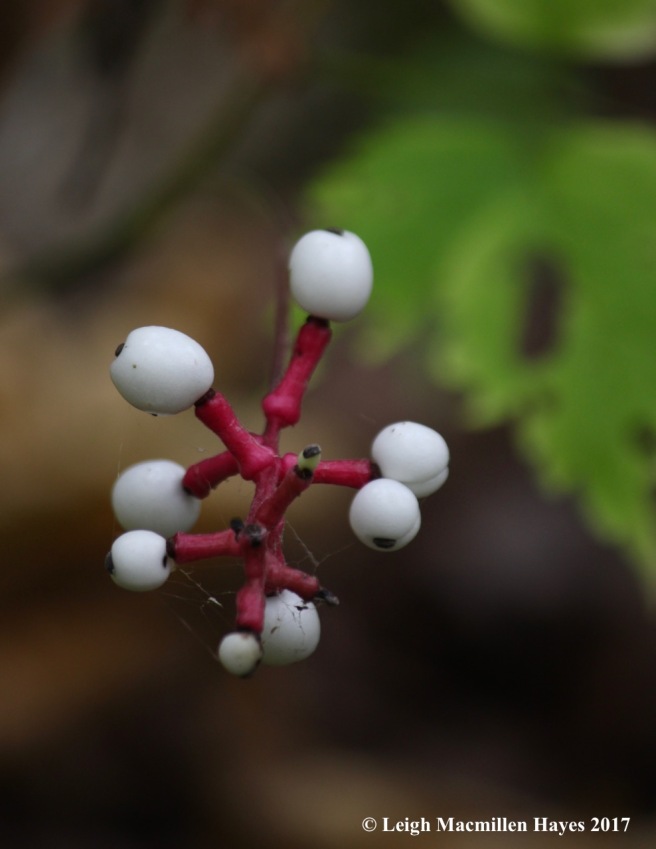 And why are white baneberry’s fruits, aka doll’s eyes, poisonous?

We noticed all of these great finds as our upward climb took us through a neighborhood of hardwoods.

Along the way we also noted sugar maple leaves atop sensitive fern fronds. 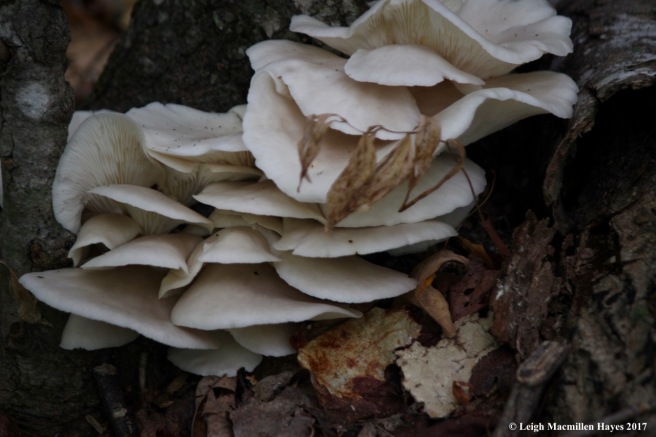 And one tree bedecked with oyster fungi. Their name always throws me off given that I grew up on the Connecticut coast where I often cut my feet on oyster beds. 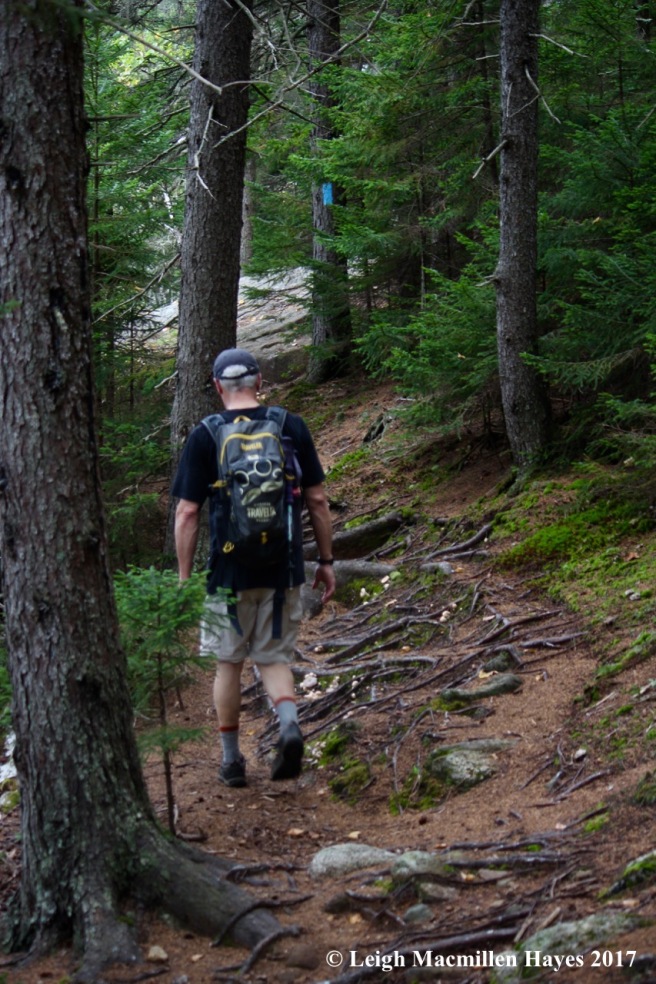 As we continued upward, suddenly the smell and look changed. We’d entered the Christmas Tree Shop where hemlocks, balsam fir and spruce trees dominated the landscape.

At last we approached a scenic view . . . 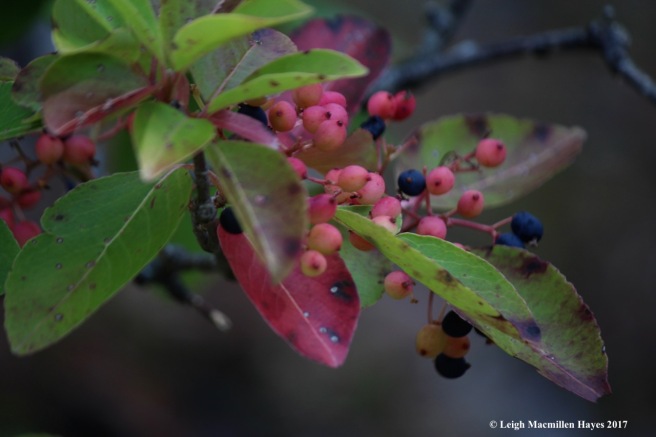 The further up we climbed, however, other shrubs added color to a gray day, including wild raisins, aka witherod. 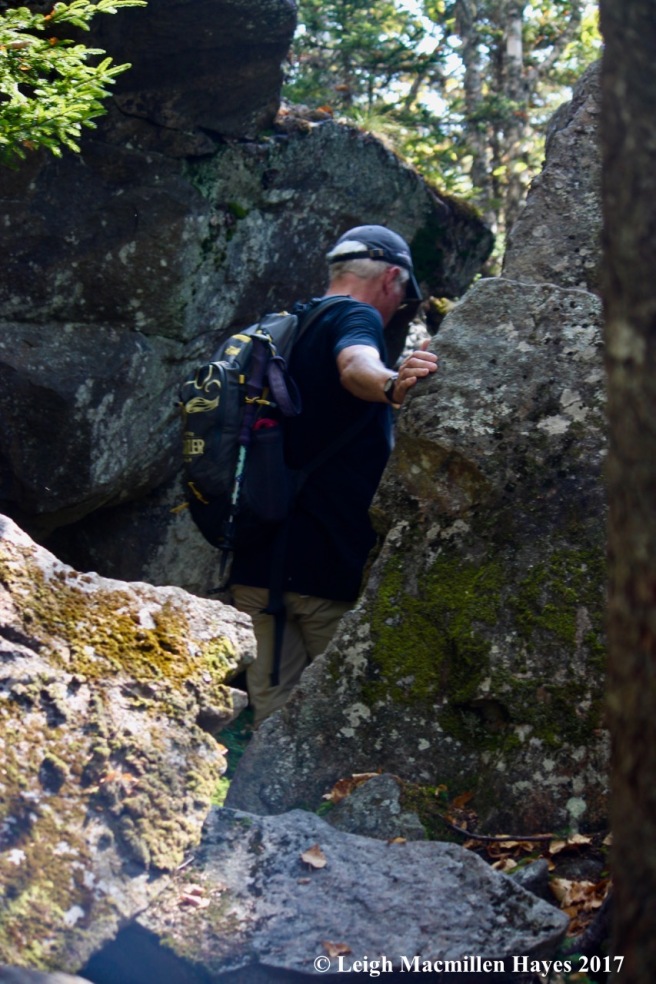 Eventually the trail conditions became more difficult and we worked our way through a boulder field that made me think of bobcats.

Eventually we emerged from the fog into the sun, thankful all the time for cairns marking the way. And the sight of the summit above.

As we advanced, other summit views made theirselves known.

But, we weren’t there yet. To reach the summit, we had to climb on.

Along the way, mountain ash trees showed off their prolific fruits. 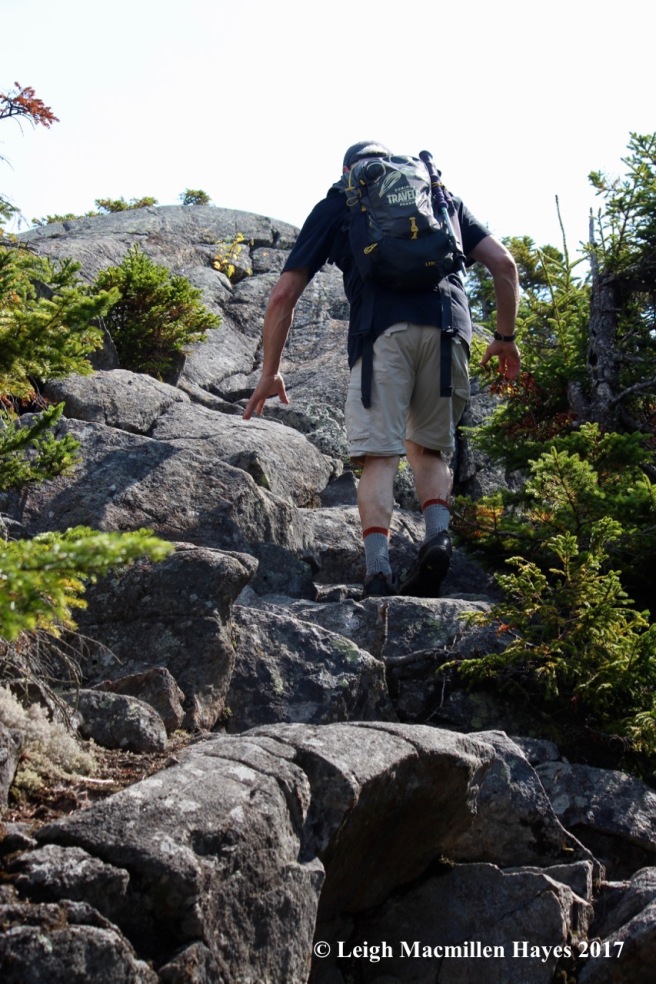 Finally, the summit was just a few steps above. 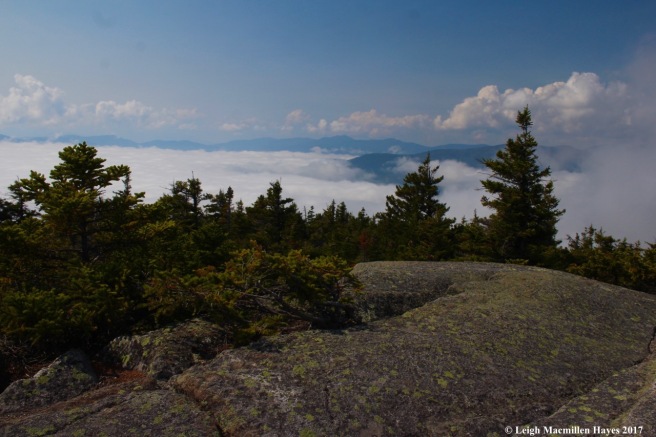 And the view–mountain islands amidst a sea of clouds. Had the day been clear, we would have had a 360˚ vantage point, but it was beautiful no matter.

After lunch we looked for the trail beyond so we could follow the Woodsum Spur for 1.7 miles before looping back to the main trail. We found many mini-trails that led nowhere and two or three times my guy looped down and around on one that promised hope, only to find himself back at the summit. But after about a half hour of searching,  we spied a splash of blue paint that held promise and so we followed it, in hopes that we’d eventually find our way down. 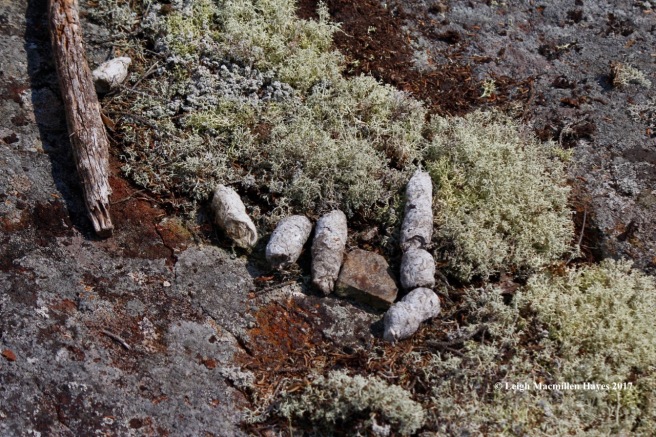 Along the way, we found lots of bobcat scat, which made perfect sense given our locale. 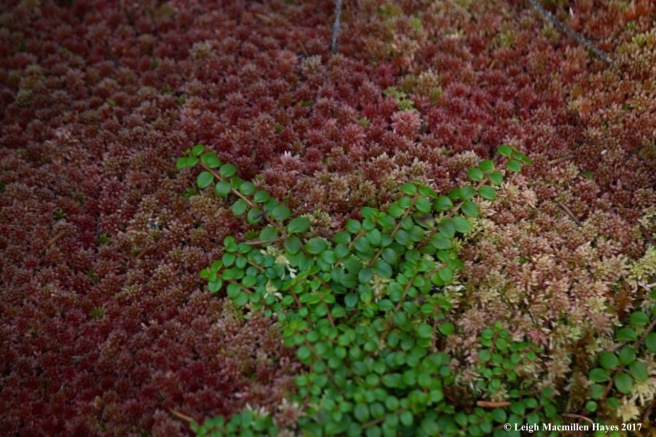 And then we reached a cairn with no trails to follow down over a rather steep ledge. We looked and looked and looked, again spending at least a half hour trying to find our way. At last, much to our disappointment we decided we’d need to retrace our steps to the summit and follow the main trail down.

Somehow, about fifty feet back, we discovered a sign that we’d previously missed. Apparently, those who had created the trail wanted us to go forward as we had to enjoy the scenic overlook, but what we didn’t realize was that then we needed to backtrack. At this point, we wished we’d had a magic marker in our pack so we could highlight the sign.

As we headed down, we were still in the sun, which was incredibly toasty, but the fog prevailed below. 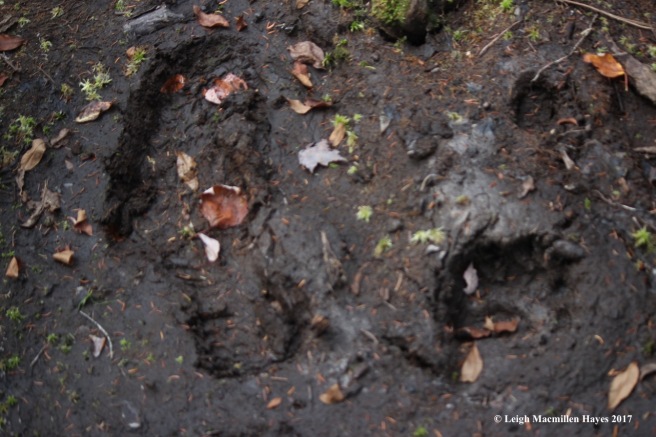 The Woodsum Spur felt much longer than its 1.7 mile length, maybe because we were so hot and tired, but we thrilled at a sight in some mud–my guy’s print on the left and a bear on the right.

It was a front print of the bear–and we wondered where it might be.

At last, we emerged from the spur and only had 2.6 miles to go to get back to the trailhead. I swear we ran down. My guy said that I always say that. He’s right–because we do.

Six and half hours (an hour later than our intended departure time) and nine miles later, we were sweaty and stinky and happy to have made the acquaintance of Puzzle Mountain–though we still had many questions–puzzling as it was.

On the way home, we stopped for some ice water followed by a couple of local brews at Sunday River Brewing Company–Long Haul Lager for me, because it was such, and Raspberry Wheat (Razzle Dazzle) for him, because he was curious.

Be puzzled? We were. But we toasted this Mondate and trust we’ll travel the same trail again.