All month long books have been staring at me from their shelves, piles or baskets, a few begging for the honors. But each time I thought I knew which book I’d feature for September, a different month made a claim on it.

And then, mid-morning, I looked out the kitchen window and saw a certain visitor nectaring at the flowering mint and instantly knew what book it would be. 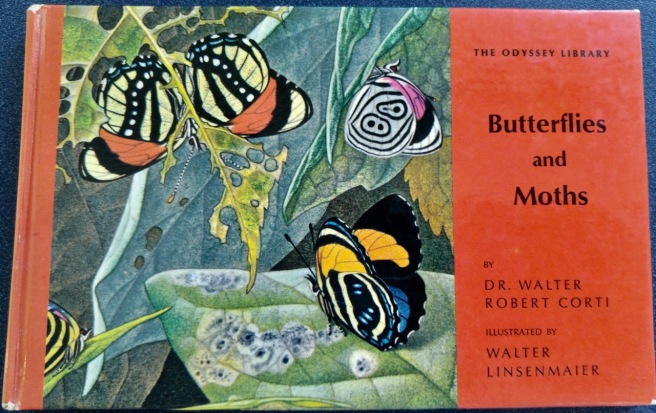 Bufferflies and Moths by Dr. Walter Robert Corti is an oldie but goodie that has graced my personal library since 1964. I don’t remember its origin, but think it may have been a birthday or Christmas present when I was in second grade–such was my wonder even then.

On the back, The Odyssey Library is described as “a new and exciting concept in book publishing, combining in convenient, compact format, texts by leading authorities and full-color illustrations by outstanding artists and photographers. Designed for the reader who wants to add a new dimension to his [or her] understanding of the world, these are books to enjoy, to study, to treasure.” Indeed, I’ve treasured it for over fifty years and referred to it often. 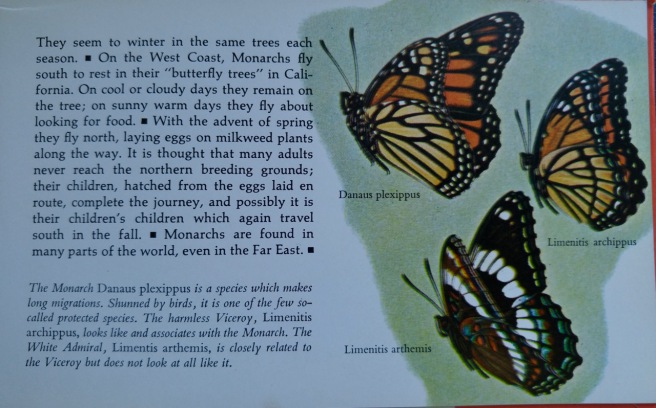 Today found me examining the differences between “look-alikes” because I wanted to make sure that what was fluttering about the garden wasn’t a Viceroy.  They do look similar, but the Viceroy is smaller than a Monarch and its hind wings have a line that runs parallel to the outer margin. There are other differences, but that was enough for me to note. Another thing to note: the illustrations in this book were by Swiss artist Walter Linsenmaier.

No such line existed on this morning’s beauty. 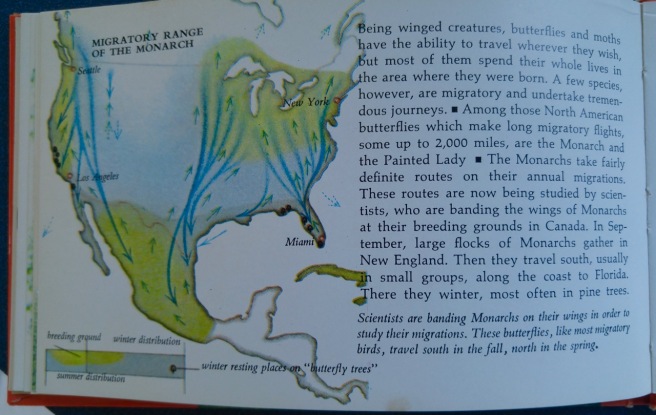 Though the author states that in September, “large flocks” of Monarchs gather to fly south, and that was once the case, at least in my backyard it’s no longer true. This is only the second one I’ve seen this year, the first being in a field yesterday and it didn’t light long enough for me to snap a photo. In the past few years, I don’t recall seeing any. But . . . when our twenty-something sons were the age I was when I received this book, we did have large flocks that completely covered some flowering plants and shrubs.

Outdated though the book may be, some things haven’t changed. The order is still Lepidoptera, so named for the scales on their wings; lepis being Greek for “scale,” and pteron for “wing.” 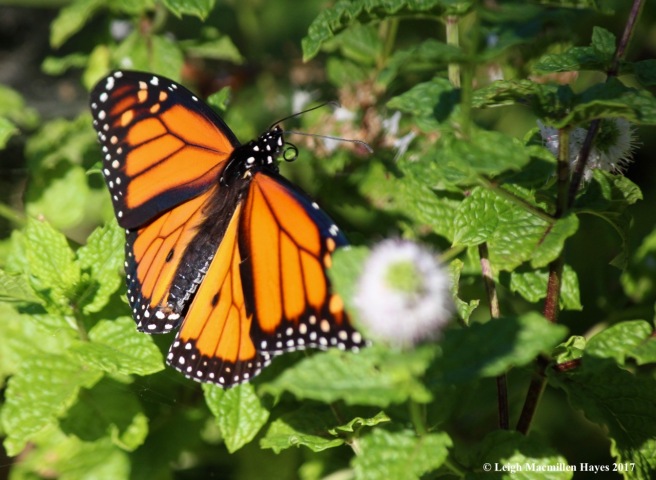 Some cool features include the tongue or proboscis–can you see the coiled dark tube below the antennae? Once you find it, return in your brain to your sixth birthday party (if you had one–my next-door-neighbors, Pat and Kate always came for my birthday dinners, but we never had parties) and the blowouts that were curled until you blew into them and made noise. 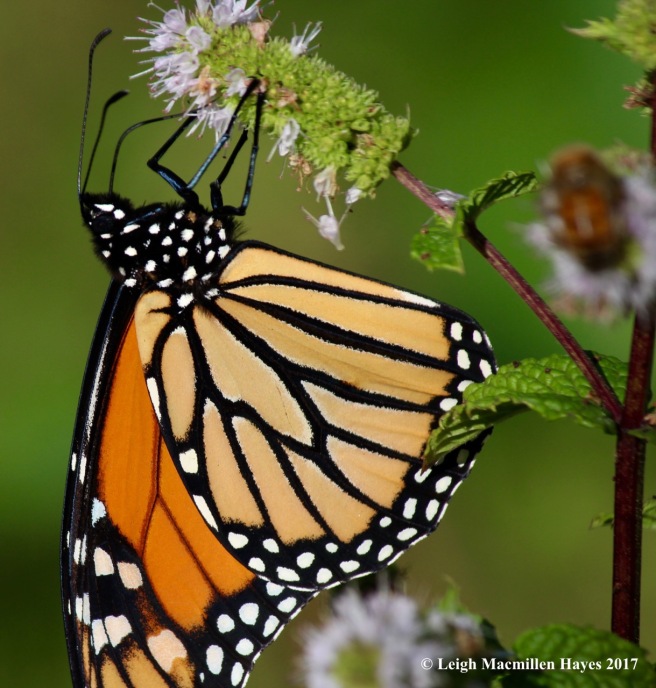 The same thing happens with the proboscis (though it lacks a sound effect), which is actually two half tubes joined to form one, and includes muscles, nerves and the trachea, as it straightens out and penetrates the far reaches of flowers in search of nectar to suck. 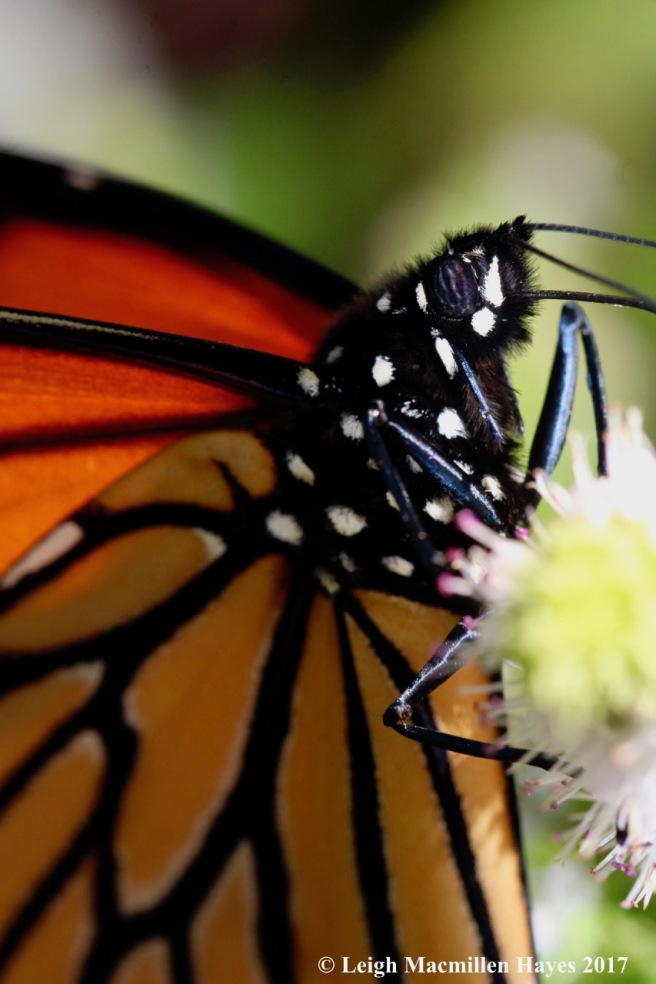 The book also mentions the faceted eyes–each compound and consisting of up to 17,000 “ommatidia,” or  individual light receptors with their own microscopic lenses. Think about what the world around them looks like. How in the world do they hone in on their targeted plants? They have their ways. Read on.

Prior to seeing today’s Monarch, I’d been blessed with many opportunities to observe Painted Ladies, which share similar colorings to a Monarch, though the pattern differs.

Dr. Corti describes their migration pattern, but mentions with all that migrate, it could be that it’s a second or third generation that actually completes a given journey.

The outer wing coloration is what always reminds me that I’m looking at a Painted Lady and not a Monarch. 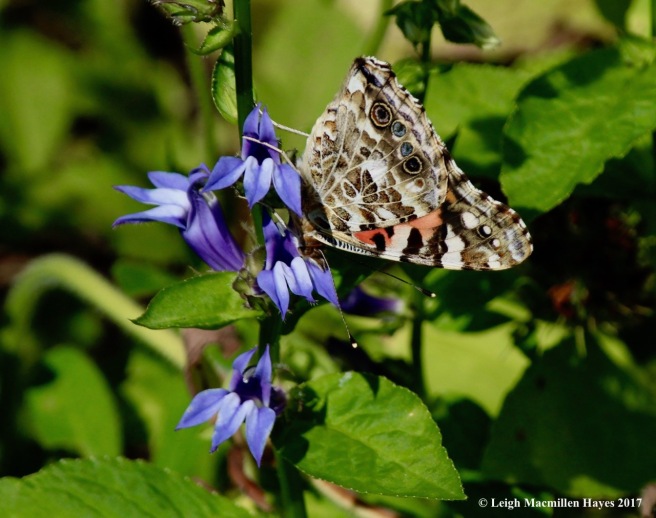 One thing I’ve observed about the butterflies that I watch–nectaring can happen whether one is right-side up or upside-down. The straw works from any approach.

The club-shaped antenna, common features of butterflies, are angled and work like radar to detect scents. And I mentioned the palpi, which are quite visible here as they are the small projections that protrude from the front of the head. These are covered with scent-detecting sensors as well. And actually, more sensors are located on the thorax, abdomen and legs. That’s how the butterflies find their sources of nourishment.

One of the things I noted about the Painted Ladies that have graced my path lately is that they flit from flower to flower in constant motion . . . 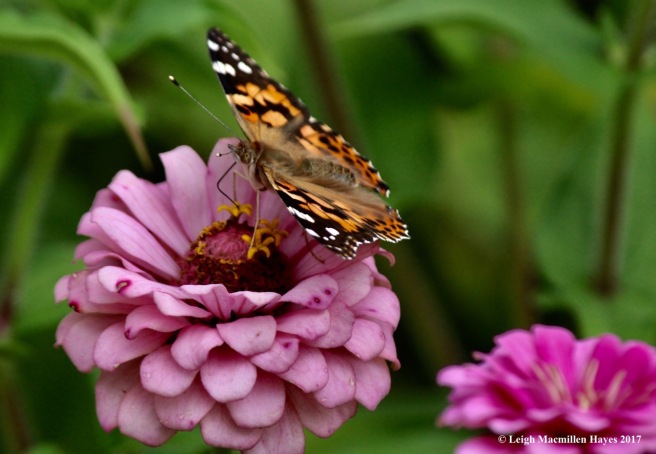 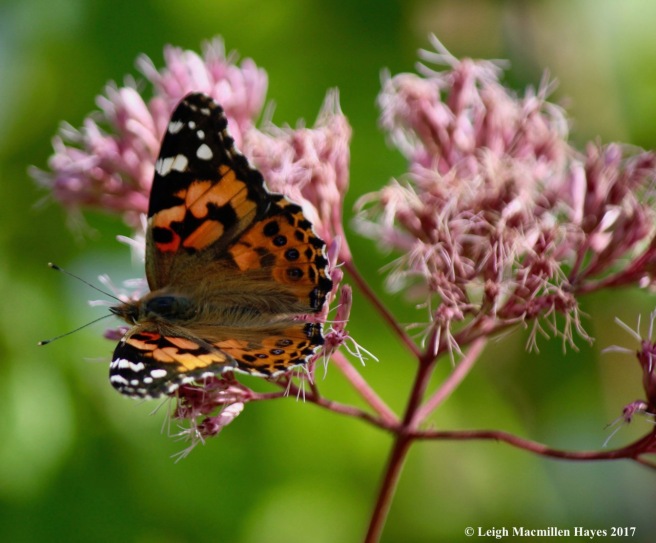 from a variety of benefactors. I know Monarchs do the same, but today the one I watched much preferred the mint.

An early season butterfly that some may confuse with the Monarch is the Fritillary.

While its coloration is similar,

its much smaller in size. 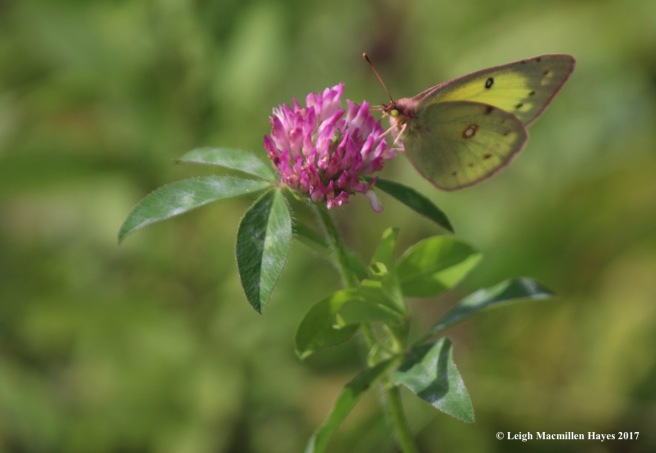 Most butterflies feed with their wings pulled together, such as this clouded sulphur portrayed. I love the subtle blend of pink, yellow and green in this beauty, and especially the yellow-green eyes.

Early on in the summer, white admirals flew about. 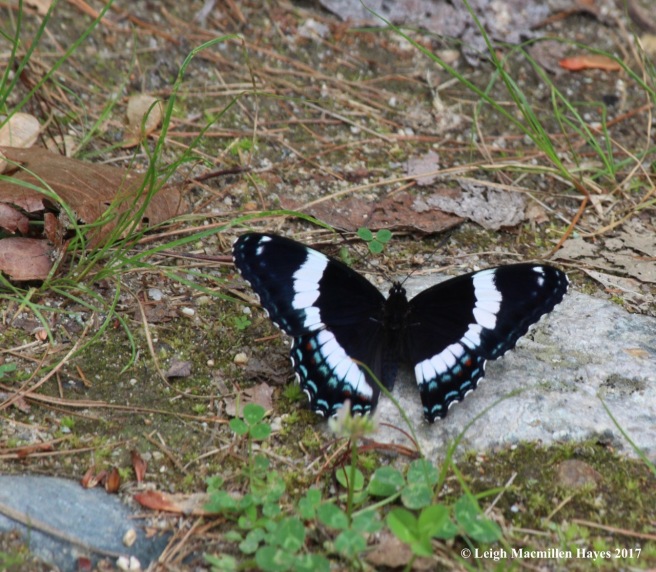 Occasionally one posed. Noticed its tattered hind wings. Such is the life of a butterfly.

We admire them for their beauty and they suffer for it–becoming easy prey. But until they succumb, they spend their days seeking sustenance. And bringing us joy.

As Dr Corti states, “The enchanting colors of their wings, their intimate commerce with quiet flowers, their modest food needs, the innocence of their courtships make them seem like fairy creatures from some unspoiled paradise. They are a delight to curious children, harmless idlers, contented topers, and strolling lovers wherever they appear. It is as if they were created solely to make the world more beautiful.”

I know there are updated butterfly guides, but I still love my first.