We had a hike in Evans Notch planned for today, but a look at the weather forecast made us question our choice.

Forecaster Jack made the following prediction: “Current observations this morning show the long-awaited cold front just about to clear the coast. NW winds are already in progress across the mountains behind the front. Today’s weather will be dominated by a familiar pattern that we haven’t gotten to enjoy much recently: upslope/downslope. The mountains will see plenty of cloud cover as air is forced to rise up the NW slopes. As that air descends the SE slopes of the mountains, it warms and dries, leading to sunny conditions along the coastal plain. All models are in agreement that temperatures will be moving downward today, so the ‘high temperature’ is whatever you’re seeing right now. For the mountains, this means that temperatures in the mountains will fall from the low 50s this morning down through the 40s this afternoon before arriving in the 30s this evening. Temps along the coast will be about 10 degrees warmer with morning 60s cooling to afternoon 50s and evening 40s.”

Consequently, we thought about changing our plans since it seemed like any foliage views would be under cloud cover. And then Marita sent me an invitation to hike with her tomorrow, which I can’t do, but we decided we’d invite her to join us today–on a hike of her choice.

The Red Tail Trail off Hurricane Mountain and the backside of Cranmore Mountain was the path she chose. It’s a funky trailhead to locate–park near the little cement building and gate, walk up the dirt road to a large water tank (now decorated with graffiti), and skip the first trailhead to Kettle Ridge, instead circling about halfway around the tank where a small sign about ten feet up a tree marks the way.

For a half mile or so, the trail follows No Name Brook, so named by moi because I have yet to locate its identity, but it parallels Hurricane Mountain Road. Near the start, barbed wire and an old mill dam bespoke its former use. 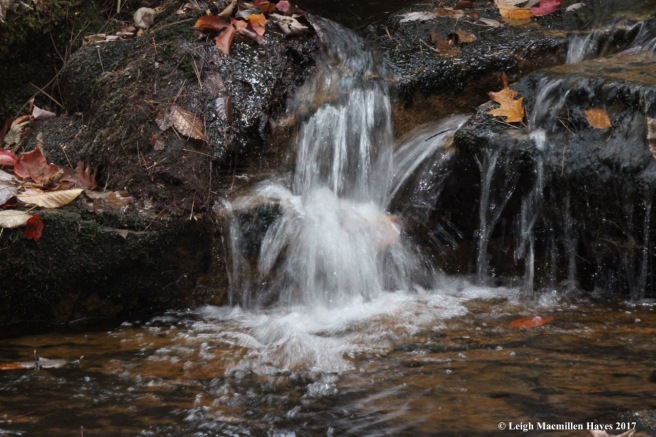 We followed it, slipping down occasionally for a closer look and listen–its rhythmic cadence so pleasing to our souls.

And then we came upon the glacial erratic that must have landed with a thud one day about 10,000 years ago. Standing over the brook and covered in polypody ferns and asters, it resembled a small, two story earth house with a garden roof.

Shortly before breaking into the old log landing, which had been transformed into a mountain bike park with jumps of sorts since we last traveled this way, Marita spied several large clumps of puffballs. And so I encouraged her to poke them. 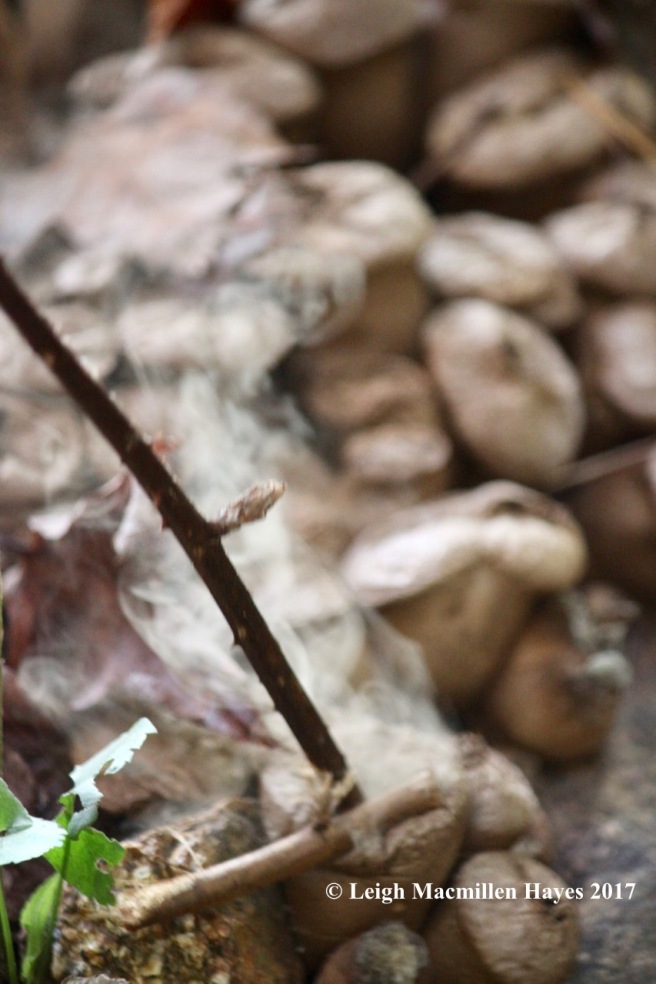 She channeled her inner child as she poked one after another, releasing the spores which wafted skyward, mimicking a smokey fire. 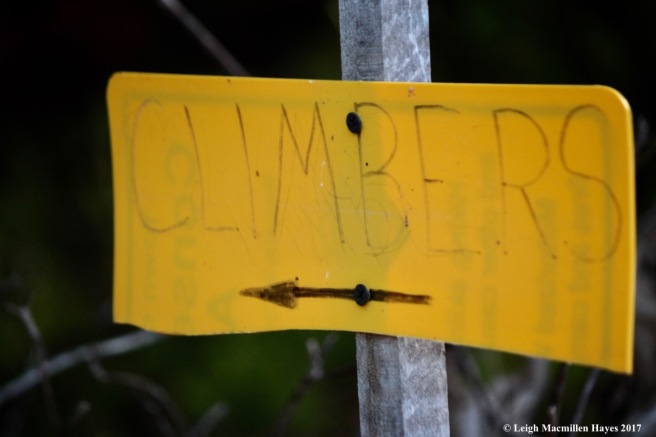 Arriving in the log landing, we were a bit confused about whether to follow the bike trail and then my guy spied a small yellow sign–and we found our way, for climbers were we. 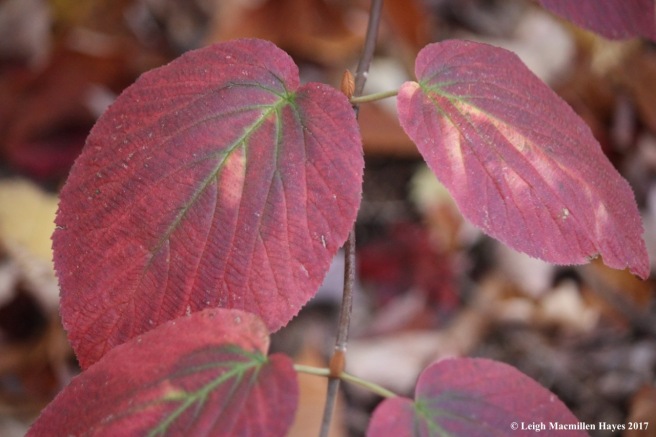 And because there were so many along the lower part of the route near the brook, I once again celebrated the variation of colors portrayed by the hobblebush shrubs.

We zigged and zagged as we made our way through hardwood, softwood and new succession areas of forest. At last, we looked northwest and were greeted with the sight of another old favorite–Mount Kearsarge North. And the color display.

Across the valley, we also spied White Horse Ledge and the White Mountain Motel.

After climbing 2.6 miles, we came to a T, and turned left toward the Black Cap Mountain trail. In the offing, we could see those upslope clouds overtaking the mountains beyond.

And ever so slowly snaking their way over Mount Washington. 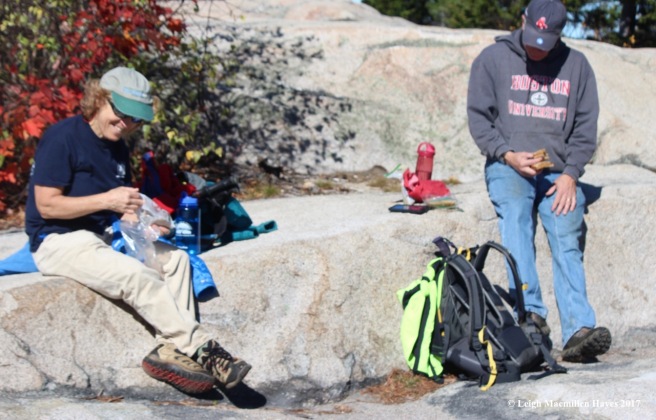 By the time we reached lunch rock atop Black Cap, we were rather warm . . . and hungry.

But ready to pose once we’d eaten. 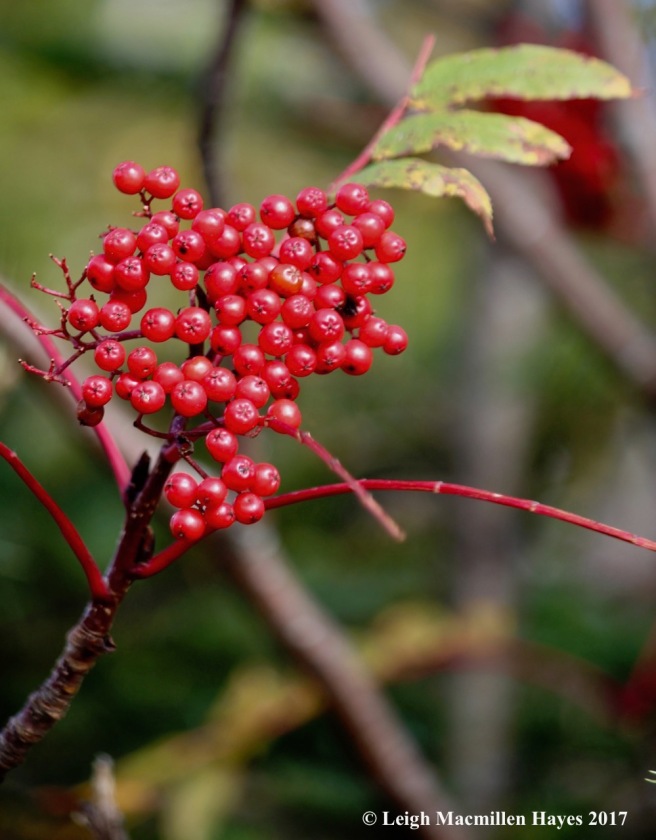 As we looked about at the top, we admired the red, red berries of Mountain Ash, and wondered about their edibility. According to Weeds of the Woods by Glen Blouin, the scarlet fruits provide food for “many species of songbirds, including cedar waxwings, grosbeaks, and robins . . . they are also a favorite of both black bear and ruffed grouse.” Blouin adds, “The berries are rich in both iron and vitamin C and were used (medicinally) both fresh and in teas, to treat scurvy. Prior to ripening, the fruit is high in tartaric acid and is unpalatable. After a few frosts, the taste mellows and, though still bitter, the fruit becomes edible.” To that end, he provides a recipe for Mountain Ash Berry Jelly. Hmmm.

For our descent, we decided to follow the loop trail around the summit of Black Cap.

With each change of natural community, we enjoyed the color it offered. 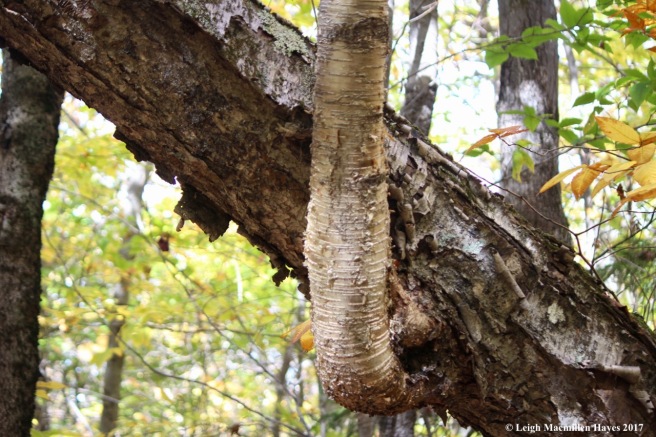 Back on the Red Tail Trail, Marita spied a tree we’d previously walked under, but not noticed. “What is it?” she asked, commenting that it looked like two different trees. Indeed, it wasn’t. Instead, it was an old yellow birch that had toppled a bit, caught in another tree and continued to grow–sending new branches skyward that looked like young trees on their own.

Again we zigged and zagged, changing up leaders as we wound our way down. 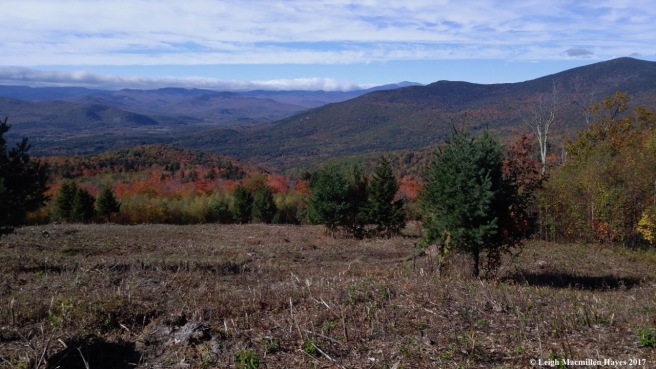 At the point where we’d first enjoyed the views of Mounts Washington and Kearsarge, we again paused. That section had been previously bushhogged, thus providing an exceptional vista. 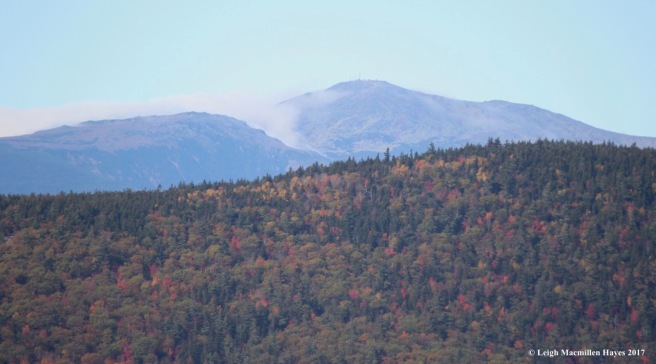 And again we noted the upslope clouds curling around Washington, but chuckled that the mountain we’d originally intended to climb was probably in the clear.

Our downward climb was much faster than our upward and in what seemed like no time, we reached the “bike park.” What had once been a mass of wildflowers overtaking the log landing, had become small patches and we were surprised that they still bloomed. 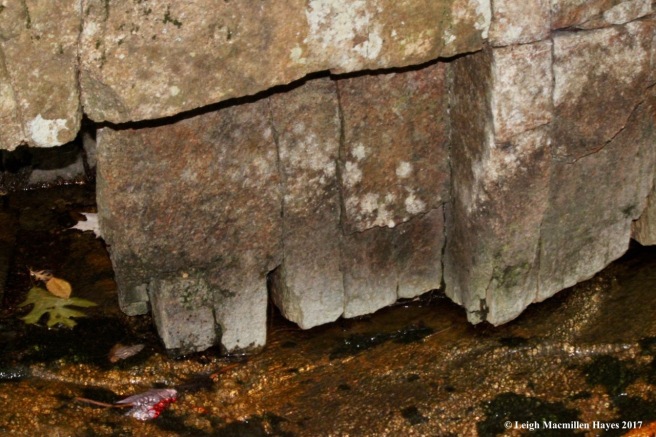 Back at the brook, we commented on the squared off sections of granite and wondered about the processes that created such. 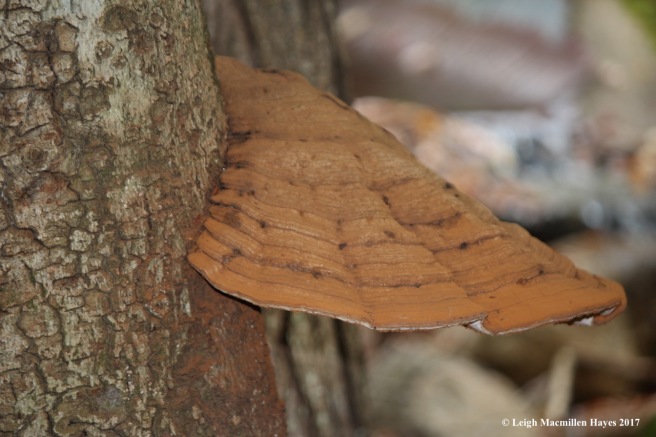 And then we reached the trailhead, where I spied an old favorite–an artist conk that has a surface area of about two feet.

From beginning to end, we knew that Plan B was really better than Plan A–for we’d had fun introducing Marita to a trail we like as we shared stories, laughter, lunch rock, and later a post-hike beer.