As I pulled into the parking lot beside the old school in Sweden, Maine, I was excited to see the door open, meaning that for the first time I’d get to step inside and take a look. 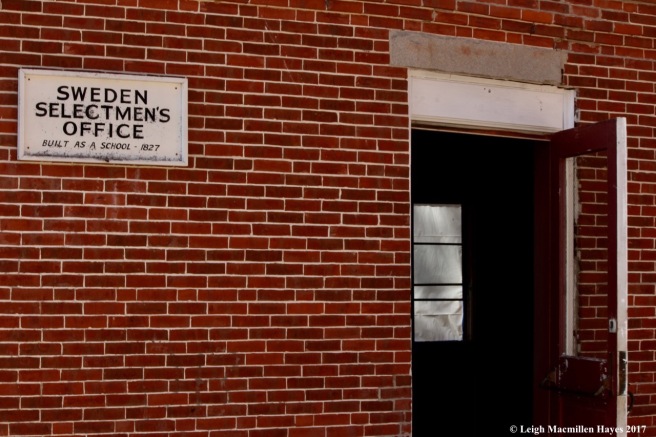 The Sweden Historical Society had recently had the building cleared of asbestos and hopes to possibly turn the 1827 structure into a museum. 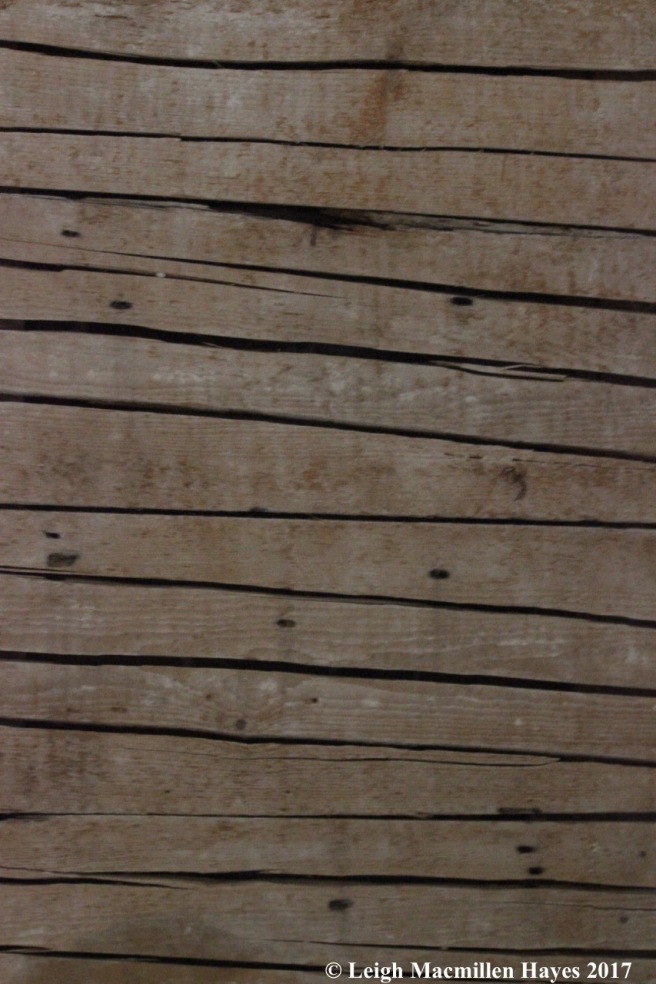 My friend, Janet, who is past president of the SHS, invited me in and gave me the short tour–especially of the former bathrooms where the renovation revealed the plaster and lath originally used to finish a wall. The wooden lath was attached directly to the studs and then embedded with plaster; often horsehair plaster. 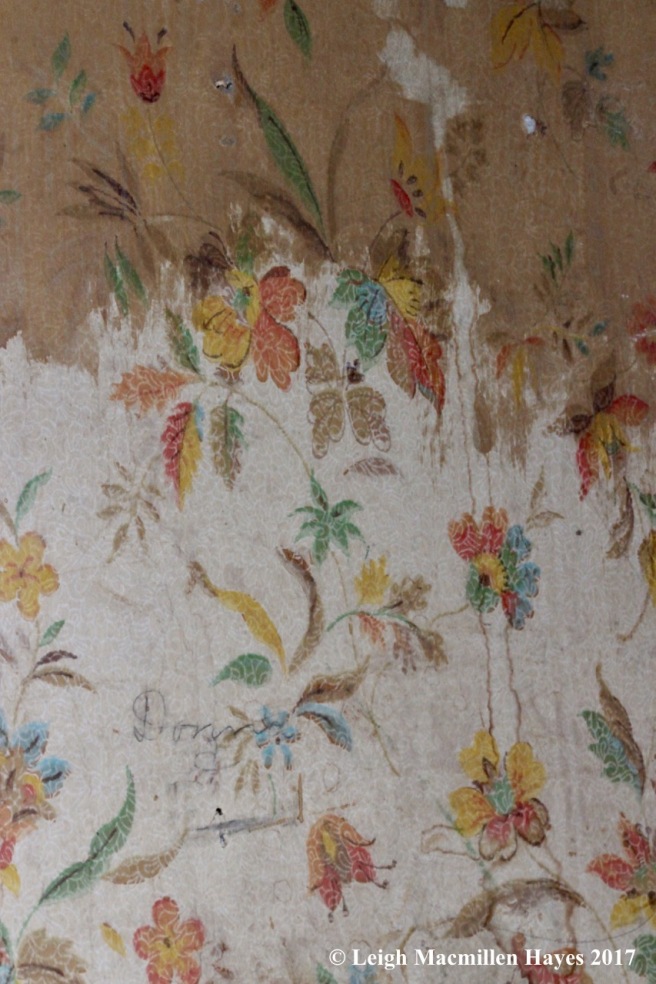 Once the plaster dried and formed a hard, smooth surface, it was either painted or covered with wallpaper. Janet was thrilled by the discovery of the latter and has plans to preserve it within a frame. Do you see Donny’s signature? I wondered if he got into trouble for writing his name on the wall. 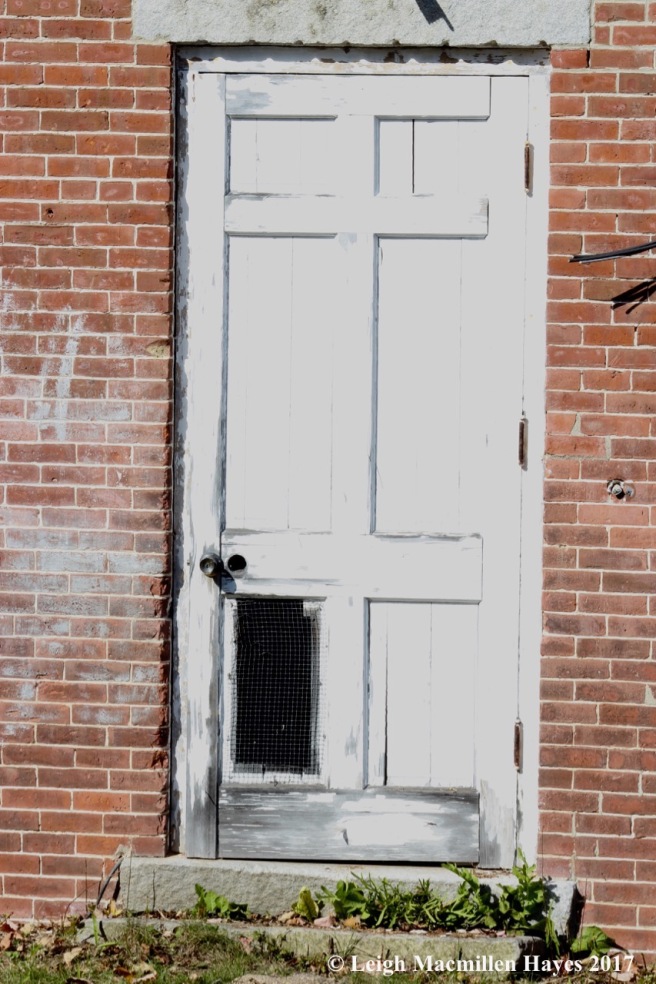 We didn’t stay in the building long because we had a walk planned, but first, Janet provided a bit more history including pointing out the original door on the front of the building. 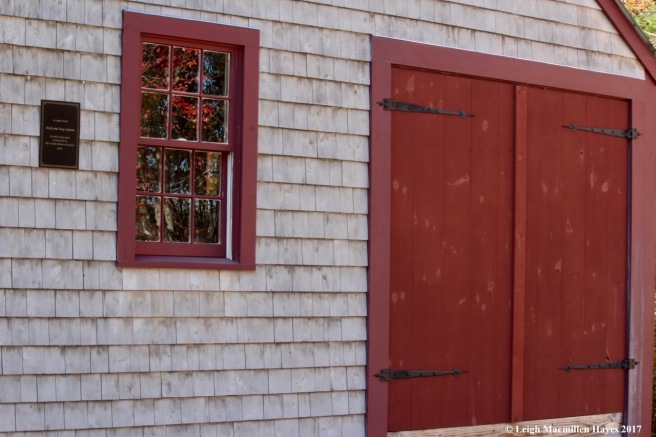 And beside that in this small hamlet that is home to a community church, town hall, town office and the old school, sits another building that looked like it had been there forever. It was an old foundry that Janet explained had been moved from another location–a frequent happening during yesteryear. This year it was dedicated to the founders of the SHS (apropos–foundry for the founders), Kay and Dick Lyman.

At last, we were ready to begin our walk. 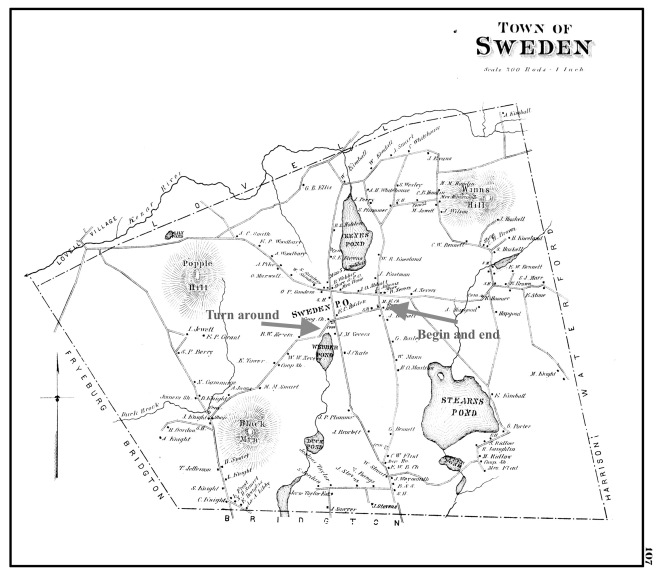 The route was a short one, but it took Janet, her friend Karen, and me about three hours to walk from Route 93 to Webber Pond Road and back again. 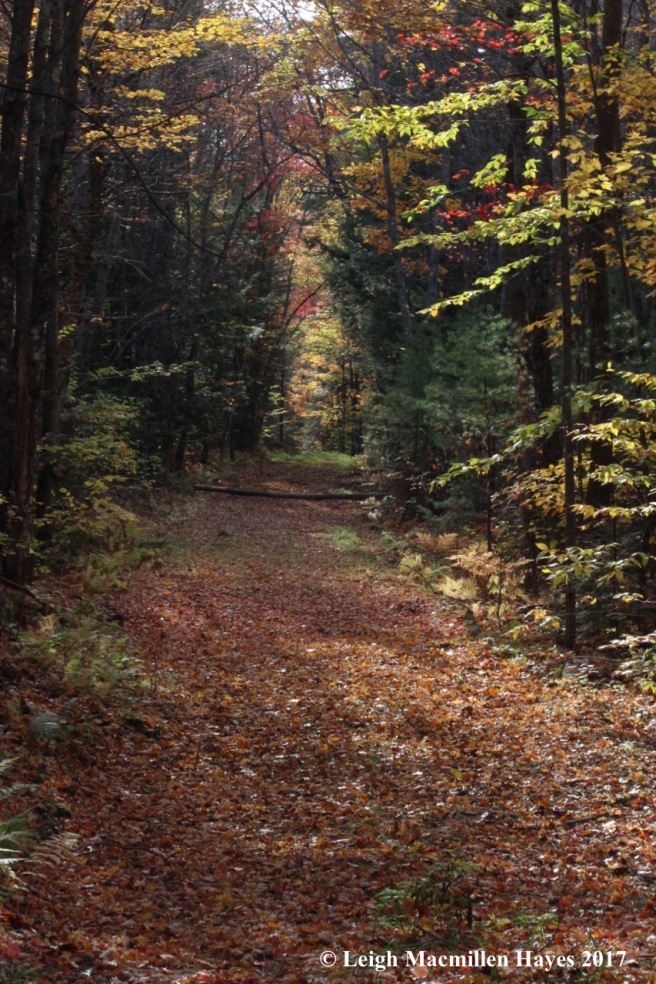 We began beside the foundry on the colonial road. Though it’s still a town road, it’s no longer traveled (except by logging trucks a few years ago). 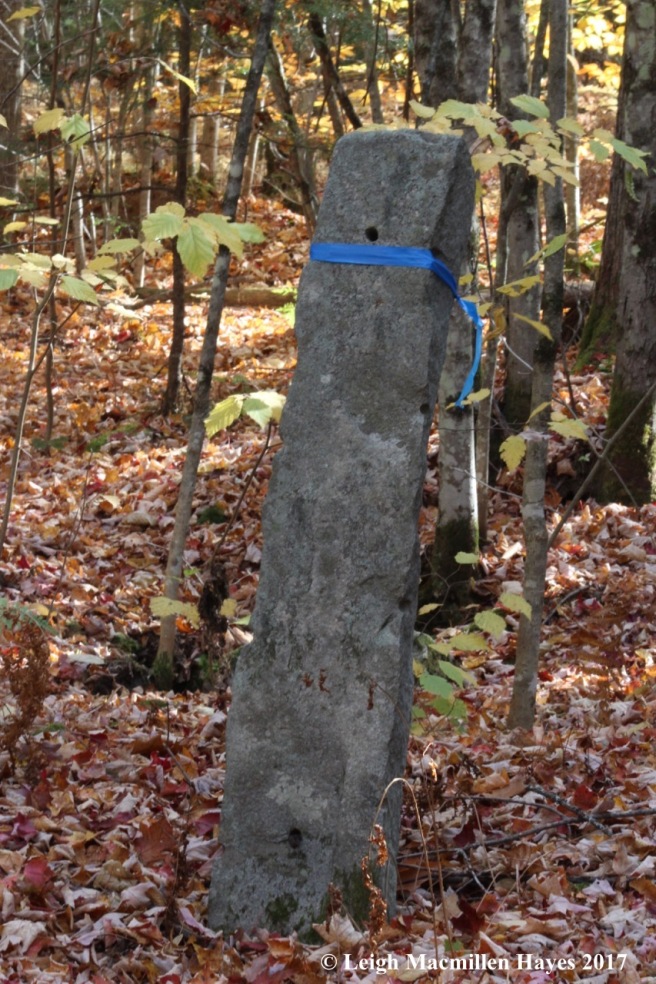 Not far along, Janet pointed out two granite pillars, indicating a fence line. And then we went off-roading, in search of other evidence of the use of this land. 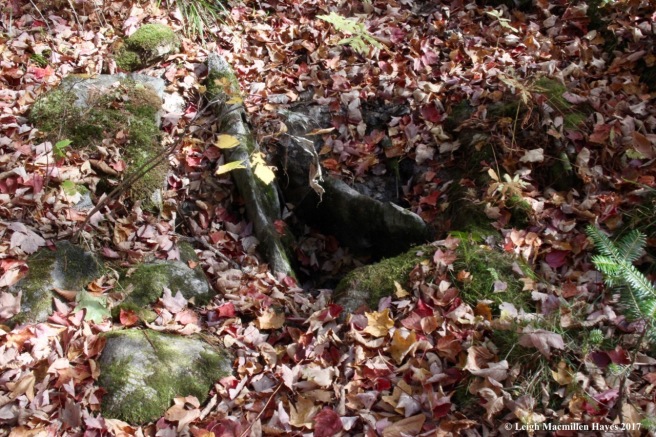 And what to our wondering eyes should appear, but an old well, its covering slabs now turned upright. We poked about some more, but found nothing else in that spot and suspected it was a well for the farm, rather than for a house. 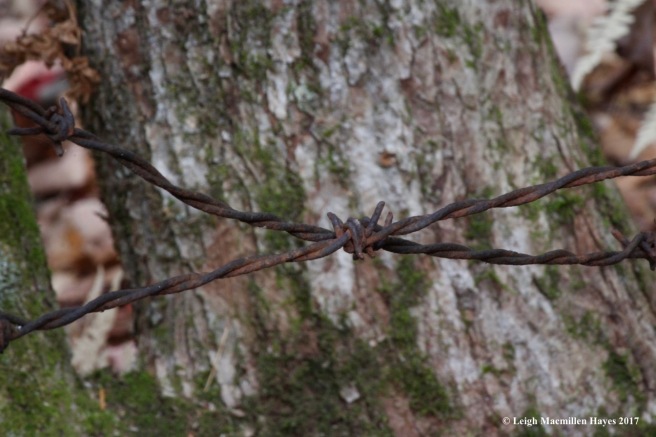 As we returned to the road, our suspicion was correct, for we found barbed wire that would have held the animals in. We stepped over it. 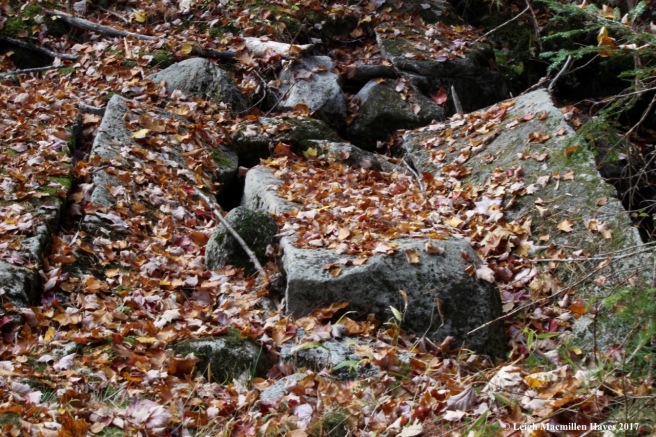 Our journey continued and at a brook that flows from Keyes Pond to the north down to Webber Pond, we came to a crossing. It was a crossing that also had us wondering for it was made of large granite slabs than ran east to west in the direction of the road. Number one, we didn’t expect the slabs to serve as a bridge, and number two, if such was the case, we thought it would have made more sense if they were turned 90 degrees. And so again, we wondered what the story might be. Perhaps wood once covered the stone?

For most of the journey, the road was bordered on both sides by stone walls–all freestanding, but some single-wide and others double. Single indicated either boundary or a way to keep animals in, while the double made us wonder about a plowed field. We noted neat construction where the stones were carefully stacked and messy sections where it seemed they’d been tossed, and again did some more wondering–were the messy parts the work of youngsters? 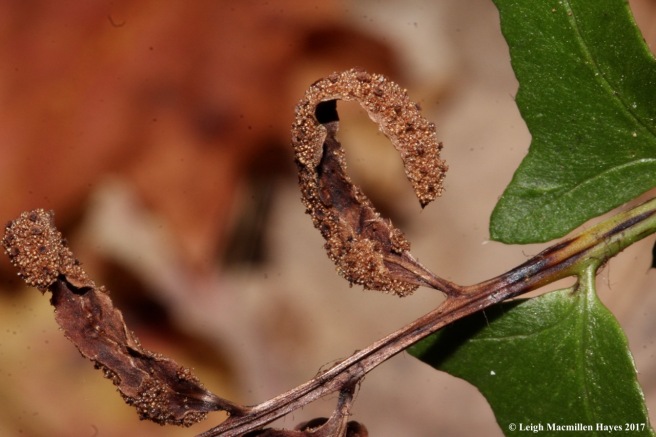 It wasn’t just the historical artifacts that drew our attention. Check out the withered leaflets on the Christmas fern. Its spores formed on the underside of a few leaflets, aka pinnae, of one or two fronds and that was sufficient for reproduction. 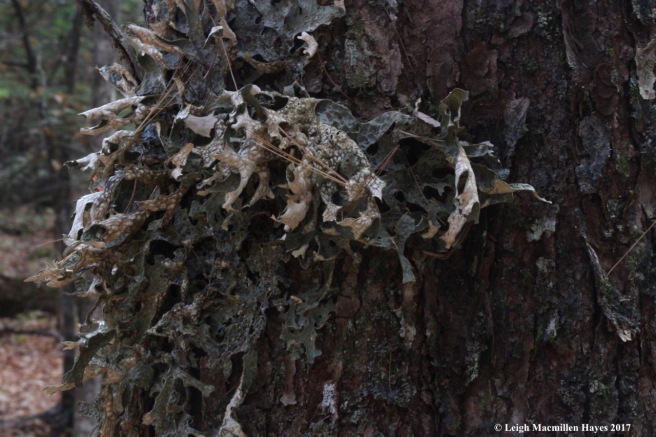 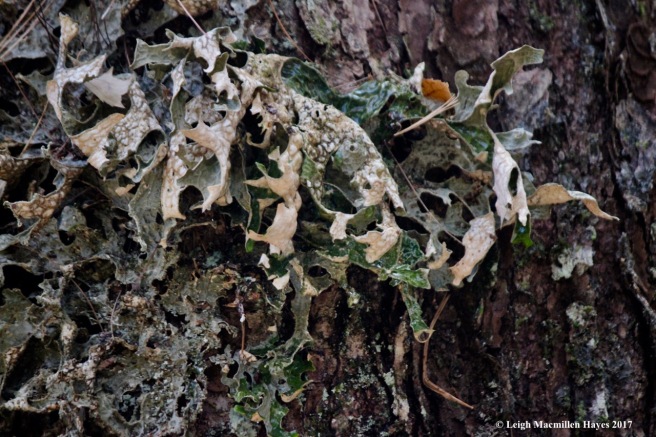 And an equally fun lesson for Karen, who lives in Illinois, and had never encountered it before. Janet poured some water onto the lungwort, which is a foliose lichen, and the miracle occurred on cue. 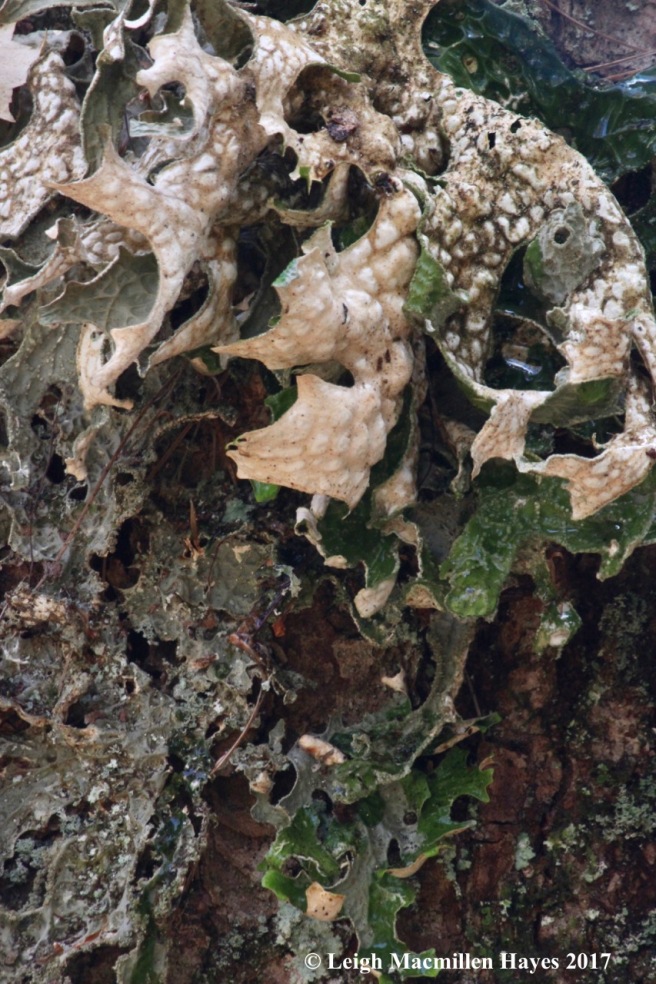 With a twitch of her nose and a wink of one eye, we watched as the water reached the lungwort’s surface and changed its color from gray to bright green, while where no moisture flowed, it didn’t transform. Lichens have a high resistance to damage by dehydration and will suspend photosynthesis when they dry out. The cool thing about them is that once wet, they can quickly absorb water and get back to food production. 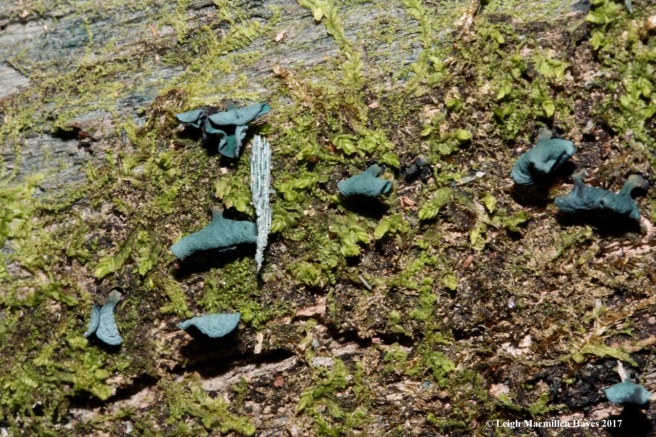 We also spied a cool fungi, and one that we seldom see fruit, but this year has been different and we’ve discovered it periodically. This is green stain fungi, so graced with the common name because it really does look as if the wood had been stained green. I used to think it was an old trail blaze. When it does fruit, the mushrooms are tiny, but among the most beautiful–at least in my mind. 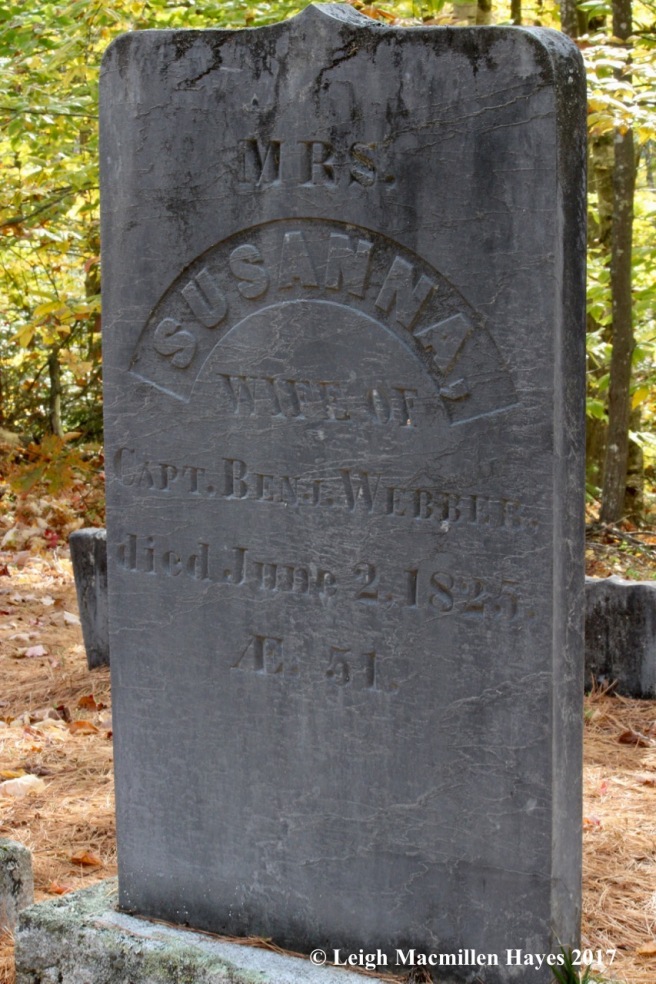 At last we reached Webber Pond Road and we crossed to the cemetery, where Janet pointed out those for whom the nearby pond and road were named. She also noted that while most foot stones in a cemetery are positioned in front of the headstones, these were located behind. Indeed curious. 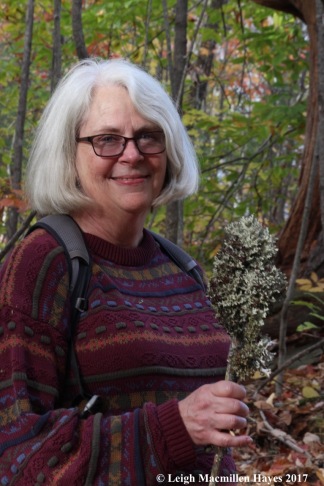 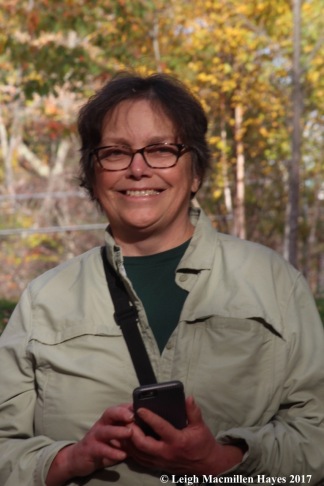 The cemetery was our turn-around point and we followed the route back, but actually went off route because we were looking for a foundation or two. We found none as we paralleled the road, but that’s okay because it just means we need to return.

Back at the old school house, I said goodbye to Karen (on the left) and Janet (on the right) and gave thanks for the opportunity to look keenly with them–as we peered into history.

2 thoughts on “Peering In”