It may not have been a hurricane, but the storm that began as Philippe, left its mark as it whooshed through New England. Along its path, the world darkened. We lost power about 1am, but it was restored by the time we awoke this morning. And yet, many may be without electricity for days.

Our tentative plan had been to hike, but we realized last night that we’d need to consider Plan B. And when the sun shone this morning, we were rather oblivious to the havoc caused by downed trees and flooding. We did check the weather report, however, and saw that there would be a few showers and the wind would continue to blow. So, Plan B it was–yard work between rain drops.

For my guy, that began with work on the back screen door for a bang we’d heard in the night turned out not to be the grill or furniture sliding off the deck, but rather the door banging against a bench. And after that, it wouldn’t shut properly.

While he worked on the door, I headed into the kitchen/cottage garden, which had become quite overgrown due to my lack of a green thumb. While my intention was to put the garden to bed, some flowers like the lavender needed to remain for they still invited visitors. 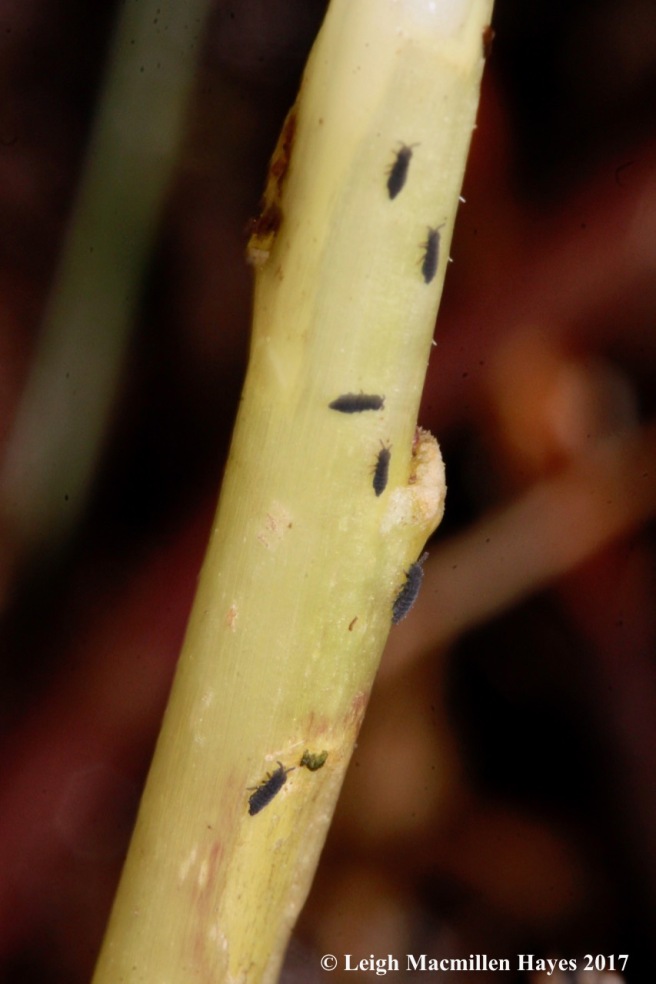 As I poked about, cutting some plants back, I made a few discoveries, including the sight of snow fleas or spring tails climbing a stalk. 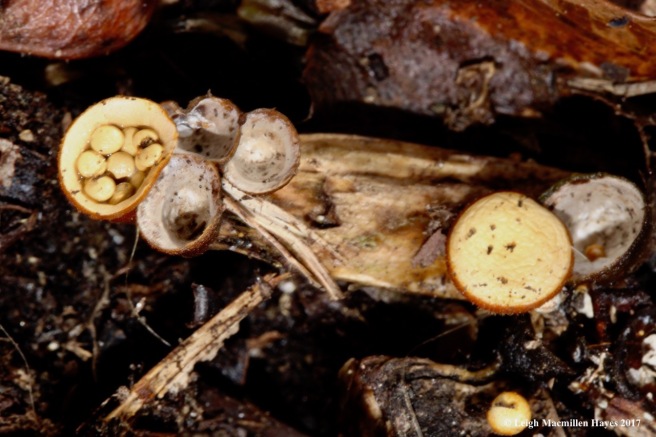 And buried beneath, I unearthed bird’s nest fungus, which look like such for which they were named, only in miniature form for they are no more than a quarter inch in height or diameter. Nestled inside the nests, like a bunch of eggs in a basket, are the fruiting bodies that await drops of water in order for their spores to spring out and find their own substrate on which to grow. 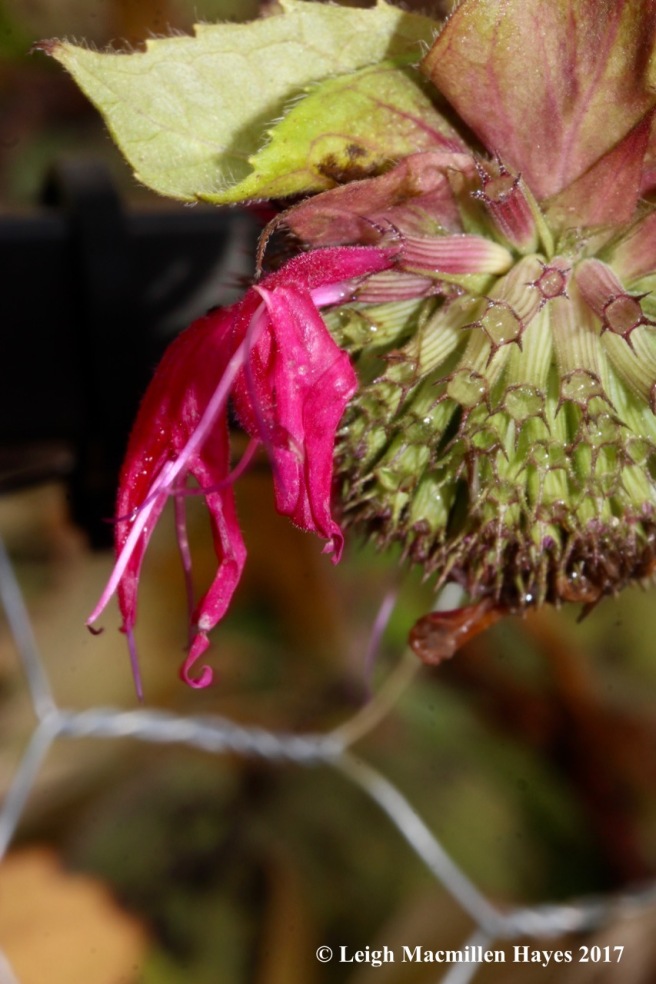 And then I approached the beebalm, where a few blossoms still bloomed on this late date.

Most of the beebalm had long since gone to seed, and today one structure became a resting spot as the wind blew. A male autumn meadowhawk seemed to hold on for dear life.

Of course, I took advantage of his moments of rest to take a closer look at the divine body structure . . .

from a variety of viewpoints. 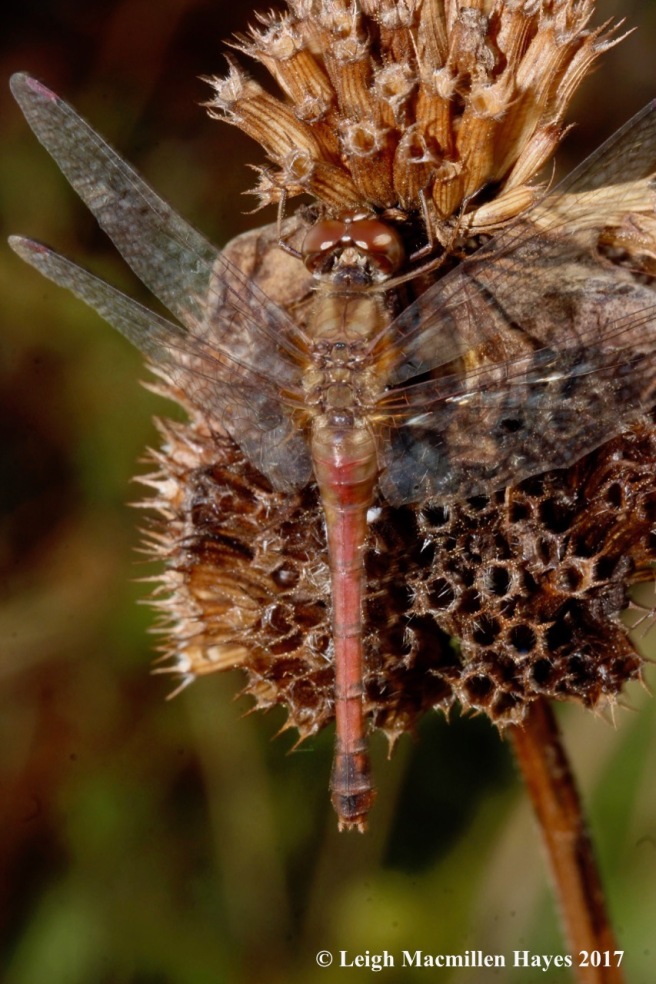 Gender determination is based on the terminal appendages. Male dragonflies have three, known as claspers, which they use to grasp and hold a female during mating. The upper or from this view, outer appendages, are called cerci, while the lower, or middle appendage, is the epiproct–meaning its the appendage situated above the anus. Females have only a pair of cerci, and I’m not sure of their purpose. That beebalm still stands–in hopes he’ll return again.

As I continued to work and observe the world around me, my guy found one project after another to complete–each of which required a trip to the hardware store. Hmmmm. And so, I too, decided to go for a trip–into the woods. Donning my blaze orange vest and hat, and knowing that I wasn’t going far, I took off. My first stop was at a branch below the quaking aspen that had fallen in the night. Though it had reached its end of life, the waxy bud scales and leaf scars were a sight to behold. The smiley-face leaf scar showed where the stem or petiole of this past year’s leaf broke from the branch. As the leaf pulled away, it severed the vessels through which water and food moved. The dots within the scar indicate where those vessels had been connected and are known as bundle scars.

In our woodlot, my trail was littered with pine cones and branches, but that was the extent of tree damage.

I found puddles that invited me in. 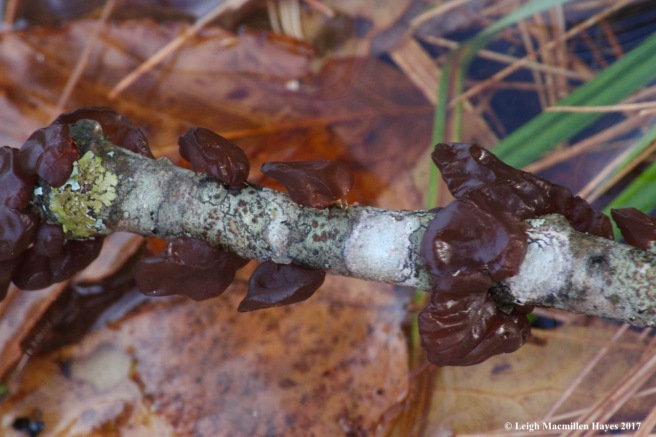 Some branches, decorated with a variety of lichens and jelly ear fungi also found their way to the puddles.

At last, I reached the vernal pool and was surprised to find it only partially filled.

Atop and within it, the mosaic of broad leaves and needles formed a tapestry of shape and color–in the moment.

Nearby, I paused by a goldenrod that sported a bunch, rosette, or flower gall, for really, it resembles all three. 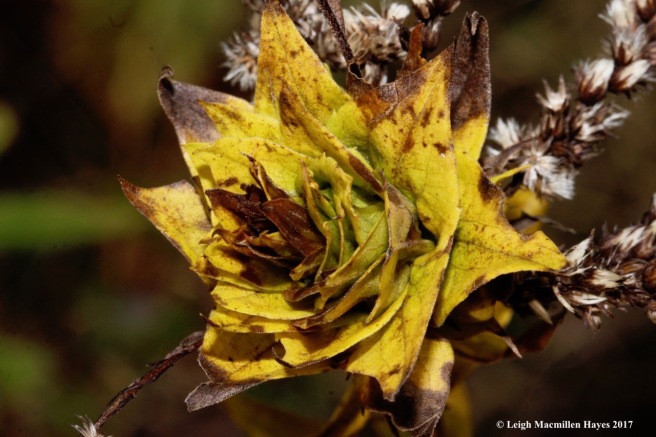 The Goldenrod Gall Midge, which is a tiny fly, laid an egg in a leaf bud, hatched into grub form, and prevented the stem from growing, though the plant continued to produce leaves that formed a tight cluster.

I finally made my way home, and turned to other gardens on the eastern side of the house, where milkweed pods also needed to remain standing. I even left the sugar maple samara because I thought it was a fun place to land.

Also at home on the milkweed were a hundred aphids all clustered together. 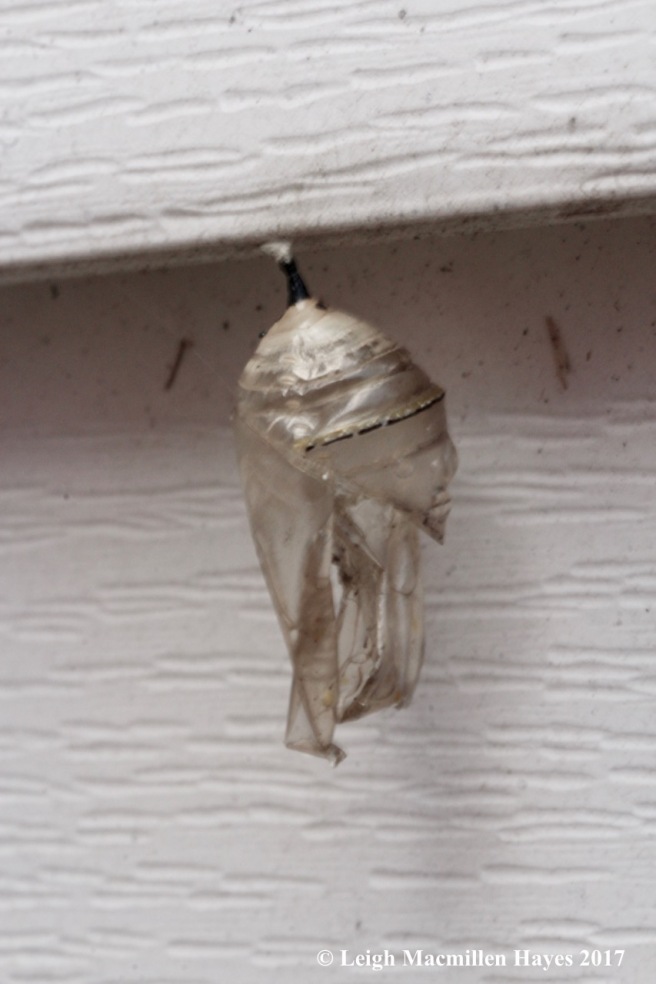 But the best find of all–the delicate remains of a monarch butterfly chrysalis. I had no idea it was there, but presume it housed one of the monarchs that consumed my attention a few weeks ago.

Just after we headed in, my sister-in-law called to say her sump pump had conked out. Off my guy went again.

It wasn’t the hike date we’d hoped for, but our day was filled with power tools and powerful insects and power-filled love.