Time. I never seem to have enough of it. Time with my guy. Time with our sons. Time with family. Time with friends. Time to explore. Time to reflect. Time to write. Time to sketch. Time to be . . . in tune with the world around me and my own soul. 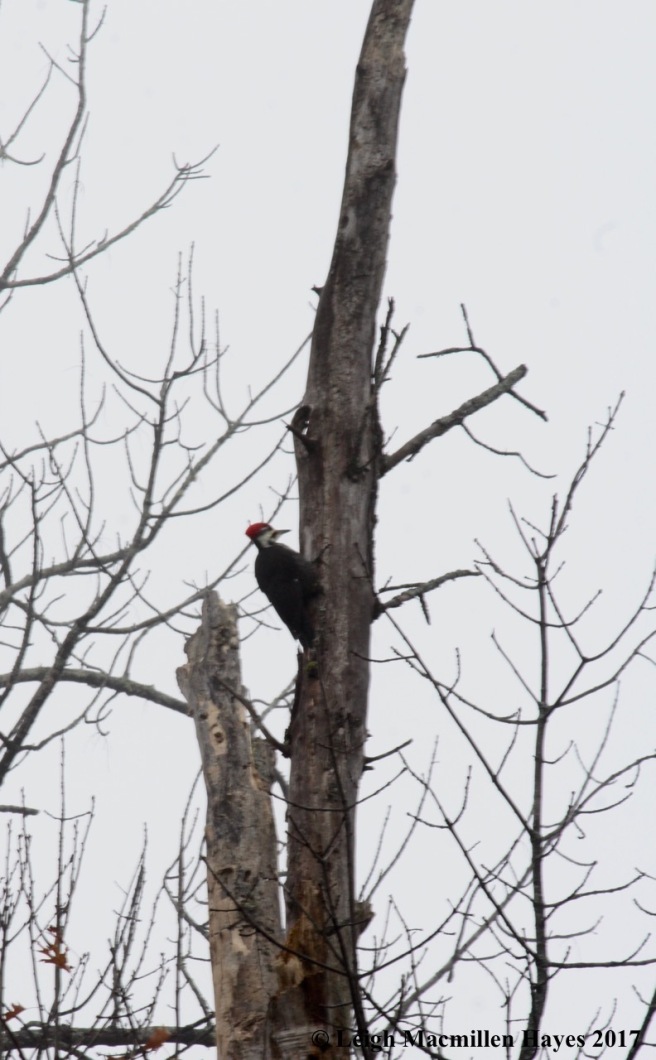 And so today, when I heard a pileated woodpecker as it worked on a dead ash tree by one of the stonewalls, I decided to take a break from my own work and give it the attention it so loudly demanded.

Its a repeat visitor to that tree; along with crows and hawks and smaller birds as well. The tree can no longer create its own source of food, but it continues to provide for others, be they bird, insect or mushroom. And I suspect that it secretly shares its knowledge of the world with the younger ash it towers over–to the right. As for the pileated, his time at that tree came to an end . . . for the moment. He’ll be back–probably soon.

Because I stood below and no longer need to look up, I turned my gaze downward. And then had to pause. What had happened? Who had visited? And scraped the ground right down to the roots? And left a pile of leaves and sticks and other debris at the edge? A mushroom foray? An acorn frenzy? I looked for hair and found none. Turkey? Squirrel? Porcupine?

And at the base of the next old ash, similar behavior.

Returning to the first tree, I discovered that what looked like dirt was actually little pellets of scat . . . tiny scat. Tons of scat. A latrine. Did perhaps a meadow vole live somewhere nearby and a predator went after it? I did also suspect that there may have been a bunch of mushrooms that were harvested and in the process the vole’s latrine was exposed. I’m not sure if I’ll ever really know, but since I had stopped to look, I noticed something else. 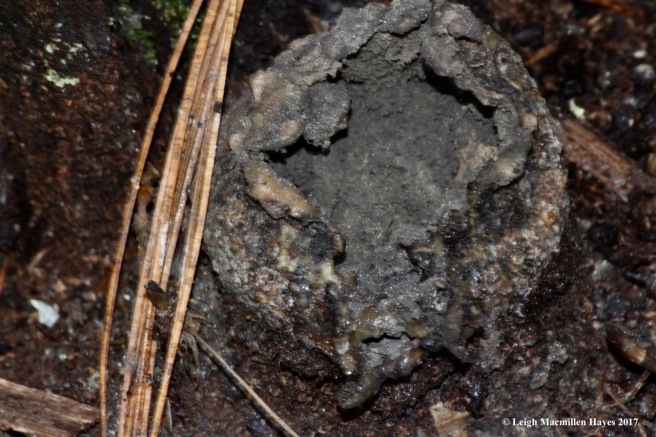 Tucked near the base of the tree and relatively untouched by whatever had spent some time clearing the area, was a pigskin poison puffball, so named for its outer skin that feels like a football. (In his book, Fascinating Fungi of New England, Lawrence Millman writes: “historical note: footballs used to be made of pigs’ bladders, not pigskin.”) The dark spore mass within seemed to reflect the ashen color of the tree beside which it grew. 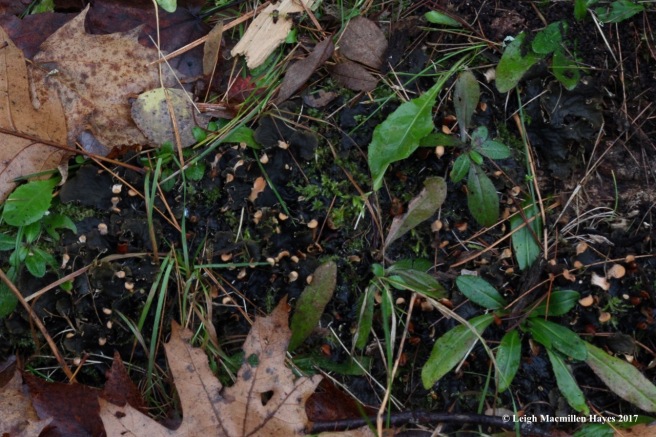 I should have returned to work then, but the puffball discovery and my wonders about the latrine made me want to poke about some more. Since I’d missed the puffball, what else hadn’t I noticed. A few steps to the left upon another tree root–a pelt lichen with many fruits, aka many-fruited pelt. I first discovered this lichen upon Bald Pate Mountain a few years ago, but didn’t know that it grew here–right under my nose.

Its smooth brown lobes shone brightly due to all the recent moisture, but it was the reddish-brown apothecia or fruiting forms that I found so intriguing. They’re described as saddles, and I suppose if you look at one from the right angle, yes, you can see the saddle-like structure.

On the next tree, another pelt known as dog lichen–apparently named because its fruits reminded someone of dog ears. 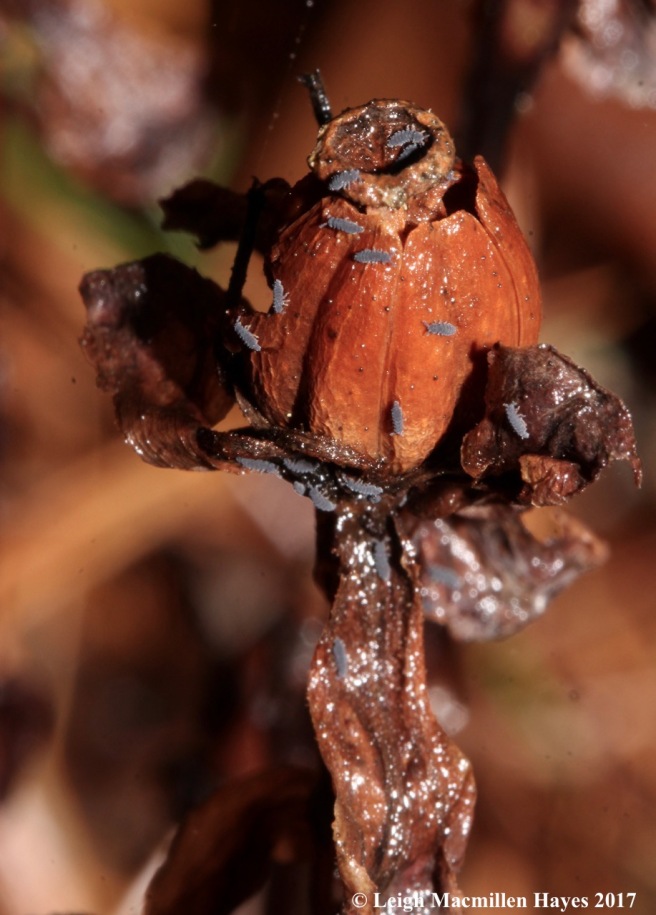 The algal component of a lichen goes into food production during rain, and so I continued to peer around. But first, a clump of Indian pipes caught my attention and upon them I noticed springtails doing their thing–springing about in search of food. Their diet consists of fungi, pollen, algae and decaying organic matter. Springtails are among the most abundant of insects, but because they are so small, they often go undetected unless you see them on snow in the winter.

And then back to the lichens it was. I found mealy pixie cups in great number growing on a stonewall. 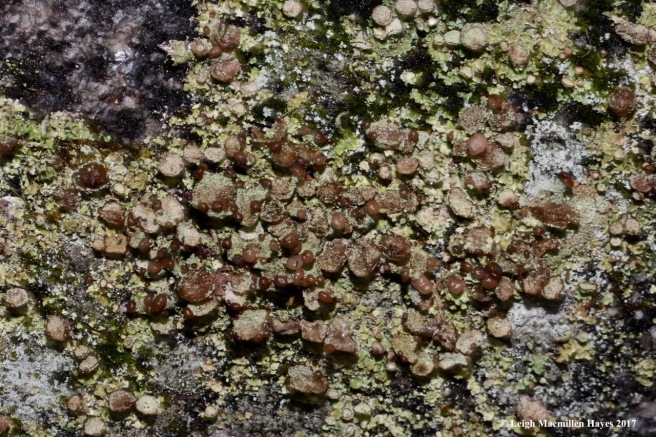 And one large patch looked like it was going to produce another, for so prolific were its fruits of tiny round balls.

Also among my great finds, were the lichens decorating branches that had fallen to the ground in our recent wind storm. I loved the picture they painted with variations on a theme of color . . . 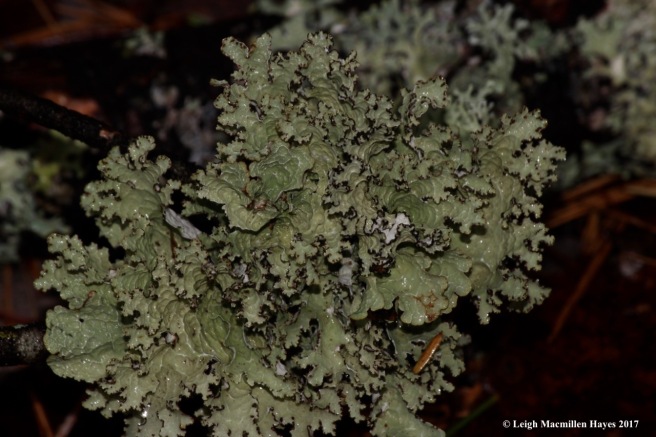 My favorite of all reminded me of so many things–a rose in bloom, waves echoing forth with ripples, and even a topographical map.

Alas, I was short on time and needed to head in, but my finds–were the greatest. Even a wee bit of time spent wondering is time well spent.