After church this morning, I stepped out the door, passed through openings in a couple  of stonewalls and then down the cowpath, crossed the power line, and ventured into my smiling place. It had been more than several months since I’d pushed the hemlocks aside to enter for it’s a wetland and woodland filled with growth that can make it difficult to meander through without snowshoes. But before winter arrives, I wanted to take a peek and learn what I could along the way. 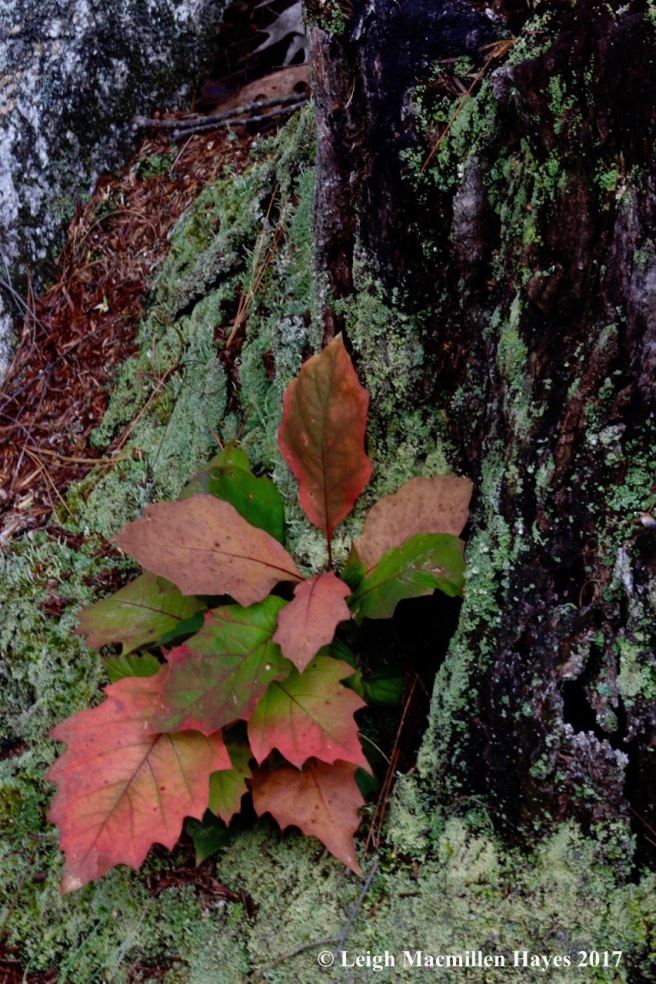 My lessons started early as I noted a couple of red oak saplings growing in the hollow of an old tree stump, their color reminiscent of the Christmas season. Last year’s mast crop (and another for some oak trees this year) meant a plentiful supply of food for weevils, little brown things, squirrels, turkeys and deer. And yet, not all were consumed and so they sprouted. Now my plan will be to wait and watch–and wonder which of this array actually will win the race to adulthood.

A little bit further into the woods, I spied a huge cache of white pine cones. This made my heart sing, for I love to keep on eye on big caches such as this and watch as they get whittled down over the course of the winter. 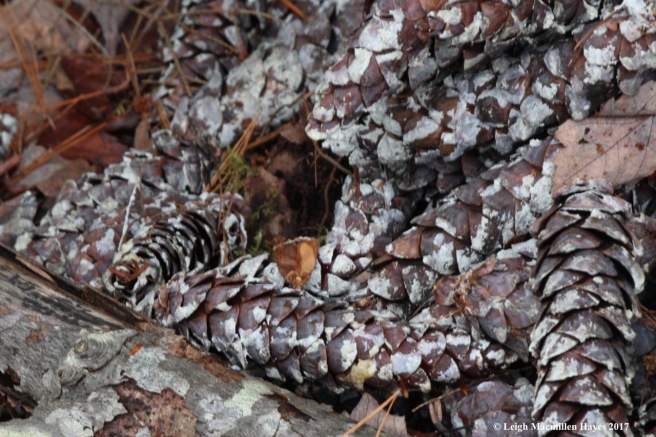 While I stood there admiring the work of the red squirrel who’d filled its larder presumably when the cones were green (and by the way, these cones are two years old, for it takes two years for them to mature atop the pine trees), I thought about the sap that coats them in white. Though the sap is drier now, does it get stuck to their feet. I know that when I come in from a walk through a pine forest, I have sap on my soles, and attached to that may be pine needles or dried leaves. Is it the same for a squirrel? If so, does it wear off like that on my boots? It must because I’ve never seen it on their feet. 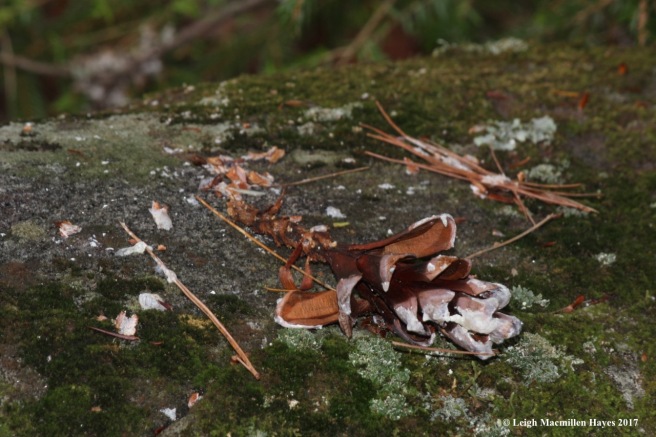 And what about as they work on their pine-on-the-cobs? Does the sap on the scales come off on  their lips or teeth–much like when we eat something sticky and gooey like peanut butter? 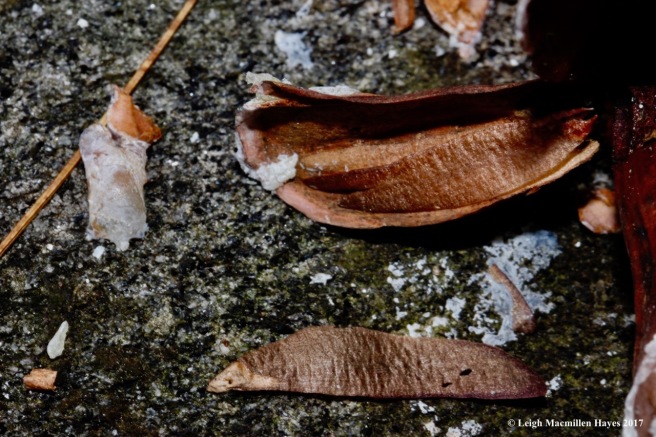 It’s a lot of work to get to the two tiny seeds tucked within each scale. They look to be about an inch long, but most of that is the wing (think maple samara). When the weather is warm and dry, pine cone scales open to release the seeds. The squirrel who’d hoarded the stash, had plucked the cones when they were still green and atop the tree–dropping them to the forest floor before they opened so he’d have plenty to eat. And then he had to gather all that he’d dropped into the piles. And now I can’t wait for the coming months–to watch the pile dwindle and middens grow; to see the tunnels he makes in the snow; and just maybe to sit quietly nearby and watch him in action. He was a bit peeved that I was poking about today and let me know with so many chirrs from a branch nearby.

I finally moved on and saw an uprooted tree I’ve visited on previous occasions. Last year I followed porcupine tracks to this very spot and spied porky within. But when I checked on later occasions, it didn’t seem as if he’d returned. Today, I peeked in and saw water. Even though it looked like a grand home to me, I’m learning that porky knows best.

At times, I moved quietly upon the duff under the hemlock trees. Frequently, I stopped to listen and look.

And then in an opening, I was again in the wet zone where the cinnamon ferns grew abundantly. In curled formation, their leaves added interest to the landscape and a bit of a crunch to my footsteps.

And piled as they were surrounding each plant, I thought back to the pinecone cache. This was food of a different kind, for those leaves will decompose over the winter and nourish the earth.

Continuing on, I came to one of my favorite spots–where the creeping snowberry grew. I hunted under the tiny leaves for the little white berries, but found none. And I’m not sure that I’ve ever seen them, especially in this place, for I suppose that I miss all the action since snow melt always seems to call a halt to such visitations and then I never make my way deep into these woods all summer. I have to assume that the little brown things and birds had a feast. Although, as any teacher knows, one should never assume. Perhaps next year, I’ll make a point of checking on these plants. 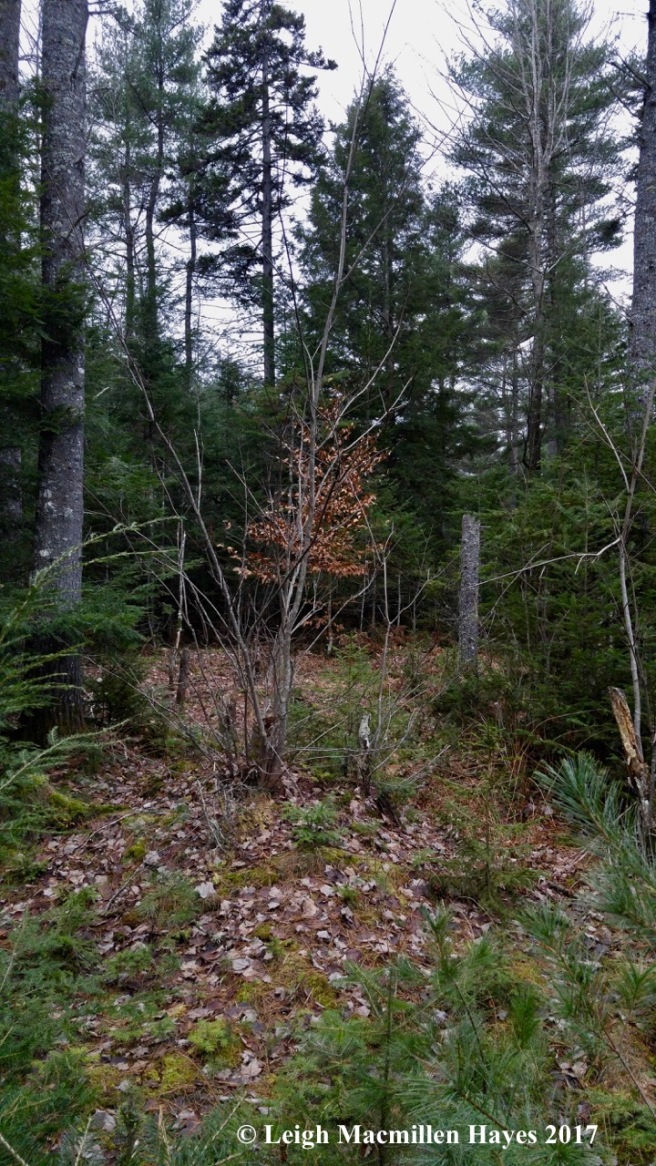 My tramp was a meander, for I knew not what direction each footstep might take me, changing my mind constantly and trusting that if I turned left or right, I wasn’t missing something in the opposite direction. The sight of a beech tree, its leaves ever rattling, did mean that I’d have a chance to move to drier land for a few minutes. 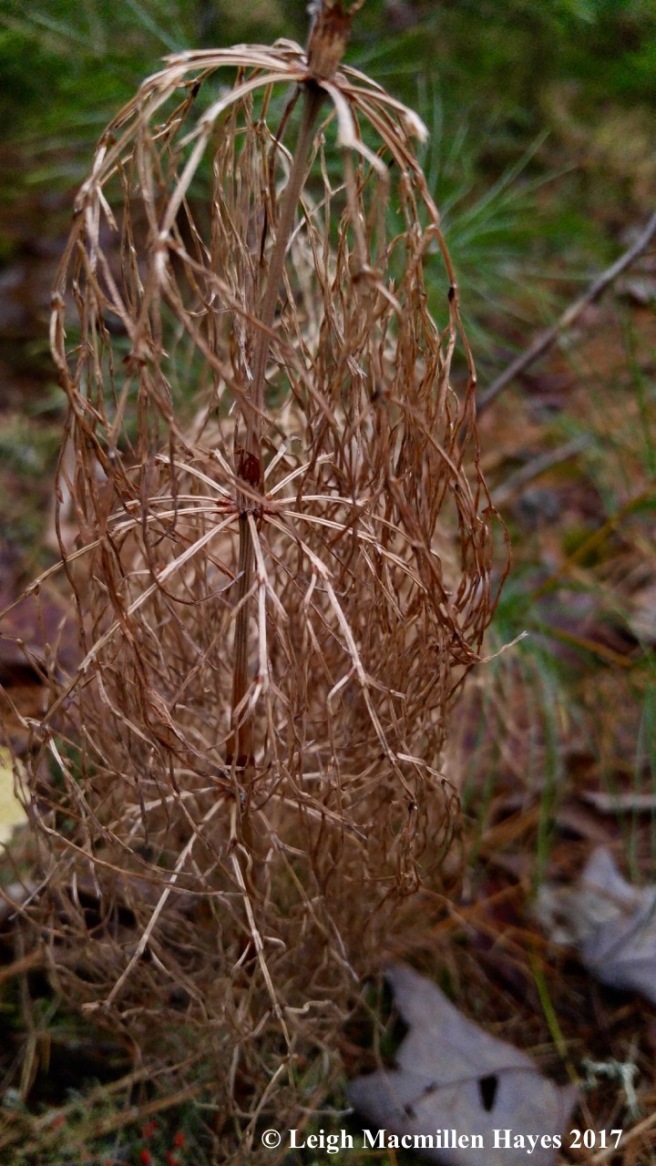 And then I stepped up onto a rock, where the growth at my feet surprised me for I didn’t realize that equisetum grew in this part of the woods. Always something new to learn.

That wasn’t all. As I looked around, a branch with yellow needles by my foot caught my attention.

This was the twig of a tamarack tree, with its needles growing in tufts atop little spurs. Had we met before, the tree and me? If so, I couldn’t remember it. Nor could I find it.

Before me was a wall of evergreens, in a classroom all of their own, for really, these are among my favorite places where learning opportunities present themselves. But, today’s lesson wasn’t about the hemlock, white pine, fir and spruce idiosyncrasies. 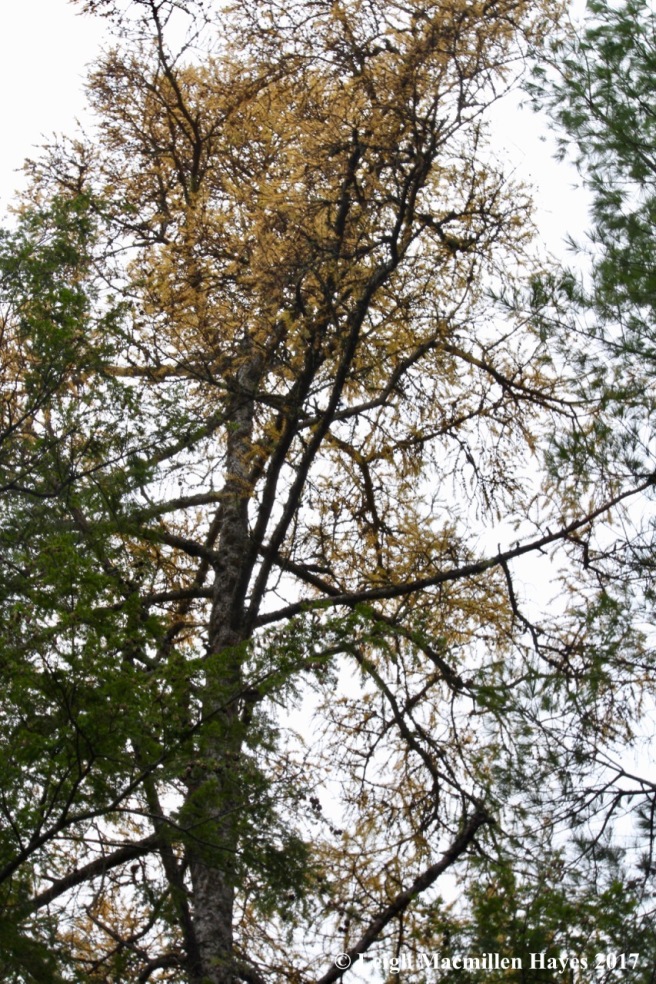 And so I scanned the sky, and about twenty-thirty feet away, I found the tree. A tamarack or larch or hackmatack tree, aka Larix laricina, is our only deciduous conifer because unlike all the evergreens, it sheds its needles each fall.

A few minutes later, I heard movement, and looked up to see . . . no, not the moose that made this deposit last winter, but two flashes of white as a couple of deer bounded off. I think that’s one of my favorite lessons of these woods, for the landscape changes repeatedly and thus offers a variety of habitats for the mammals of western Maine. This is the place where I get to learn the most about them and their behaviors. 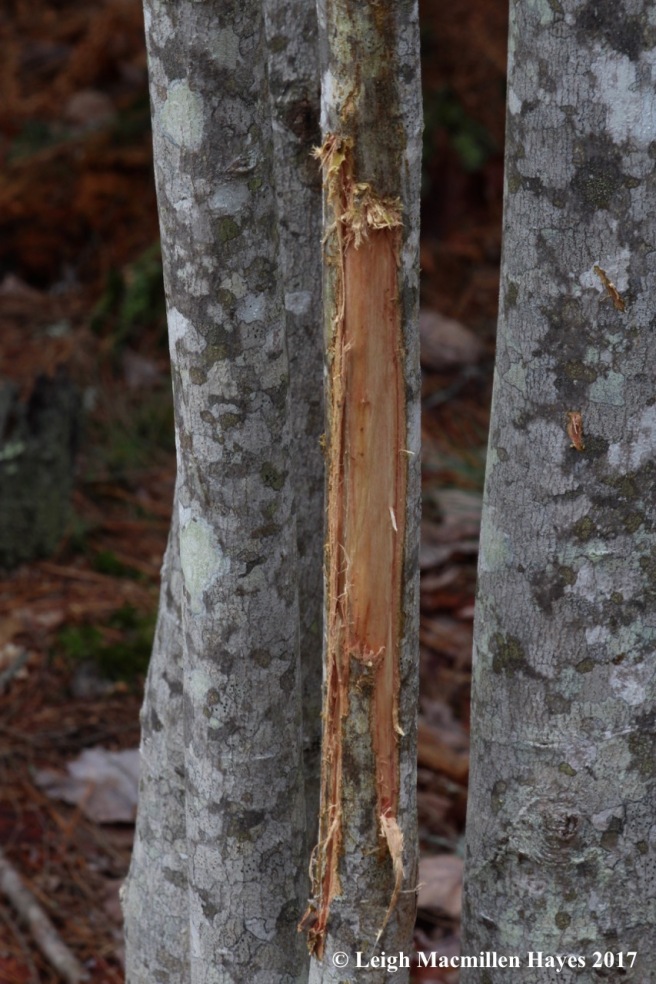 Sometimes I’m rewarded with spying the mammal from a distance, but other times I find evidence of its behavior, like this antler rub with frayed bark at top and bottom and smooth wood between.

I’ve watched the forest succession in these woods for twenty-five years, 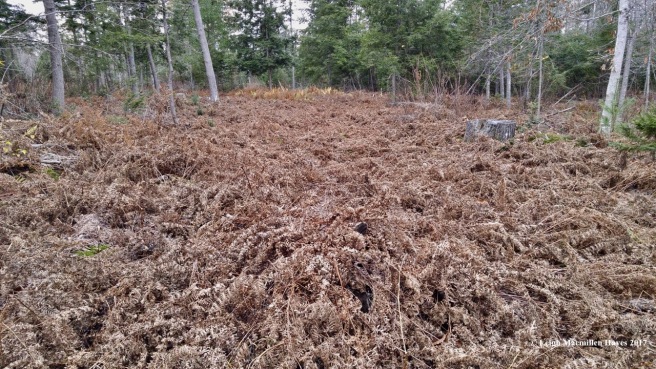 With each change, comes more change. And so the mammals move from one spot to another, but they’re still all here–somewhere. 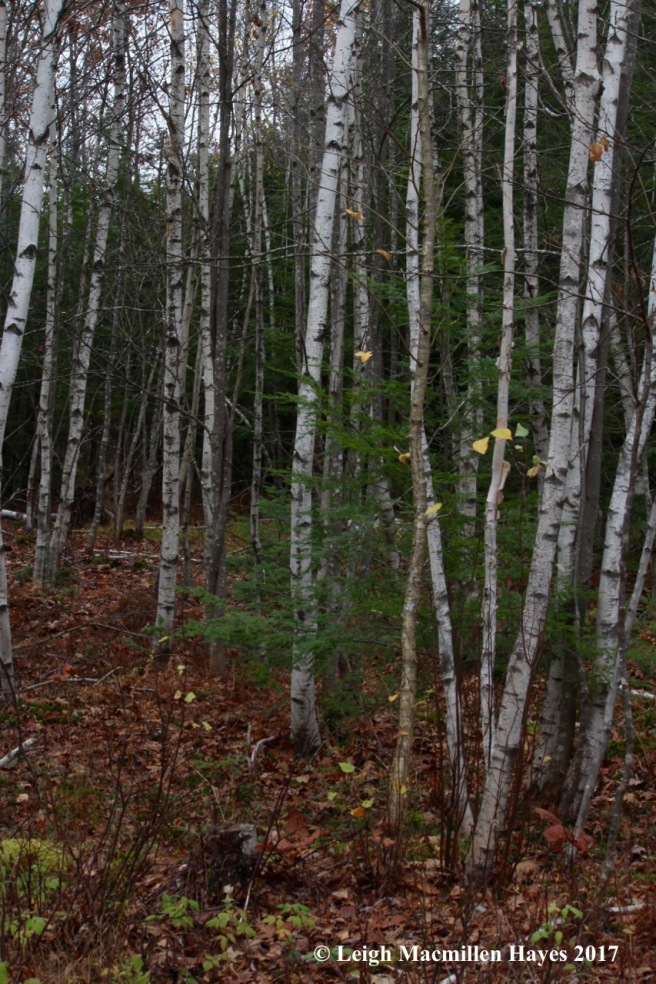 I just need to listen and look. 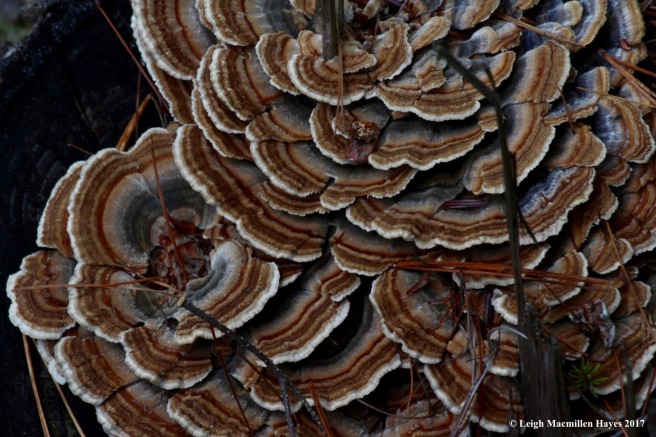 It’s not just the mammals and trees that I get to learn about. My studies include among other topics, fungi, of which I’m only a so-so student. But I do know that this is turkey tail, aka Trametes versicolor.

And then I happened upon a hemlock stump topped with a large, beautiful display outlined in a coffee brown and salmon pink. It took me some work to remember its name. I can tell you where else I’ve seen it for it grows upon a hemlock log at Holt Pond.

Before I forget again, it’s a rosy polypore, if memory serves me right. I only hope my fungi teachers weigh in on this one. 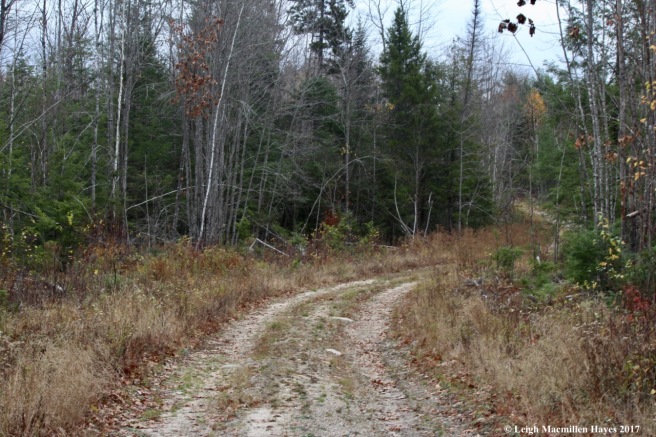 At long last, it was time to follow a logging road back to the snowmobile trail.

Sometimes, I slip back into the woods before reaching the trail, but today I chose to follow it. And what to my wondering eyes should appear, but more creeping snowberry atop sphagnum moss. 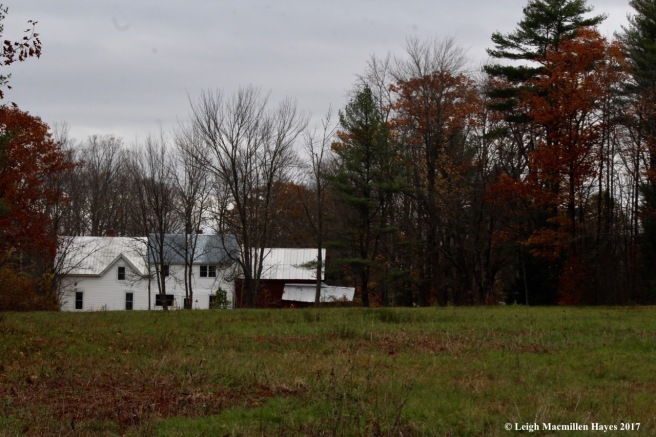 As I finally crossed the field toward home, I gave thanks for the classroom that is right outside our back door and for the lessons learned in this Sunday School. Now I just have to remember everything, which is why I record so much.