Our first official snow storm of the season left us with about an inch of the white stuff that makes me rejoice. And upon waking this morning and peeking out the window, the sight of porcupine tracks looping around the yard brought a smile to my face.

I love the first snow storm for even though I have seen signs of the critters that pass this way, their tracks confirm my convictions. Over the years, I’ve come to recognize the prints and trail patterns, but as the snow gets deeper the tracks sometimes become more difficult to decipher. This one was easy due to its pigeon-toed sashay. 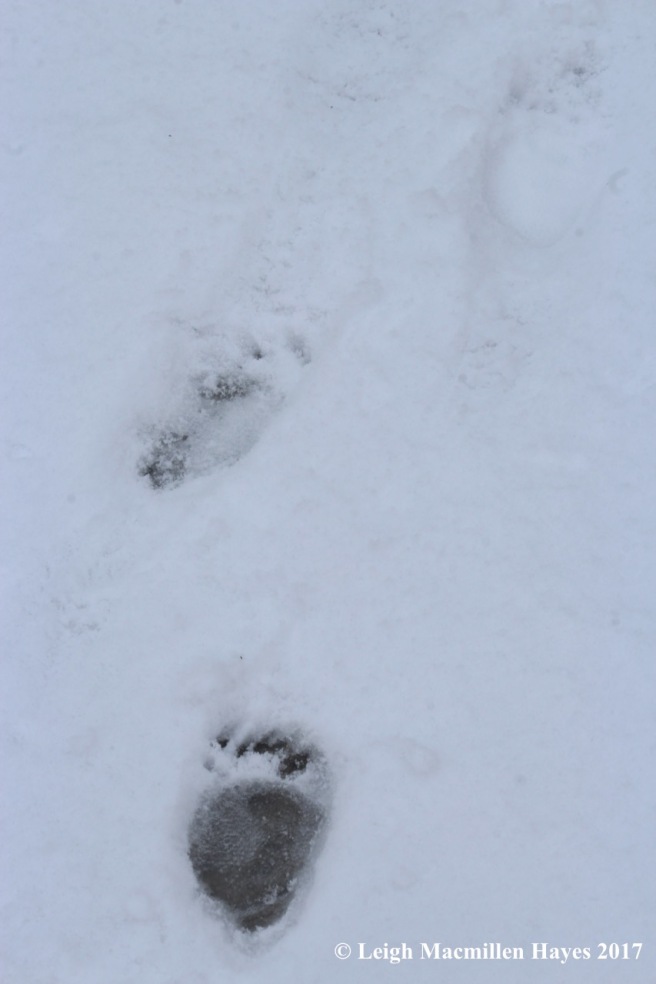 And then the individual prints, especially those that crossed the deck, showed the large foot pad and five toes with nails extended. A friend in Poland, Maine, sent me a couple of photos of the critter that crossed her deck this morning. She ID it herself, but wanted confirmation–for it was an opossum and a first for her.  I found my first opossum prints last December and wonder if I’ll have that opportunity again. Anything is possum-able.

Since the porcupine had drawn me out (and I noted that it disappeared under the barn–of course), I decided to head off into the woods. But before I left the yard, I spotted junco tracks–and . . .

a couple of worms–frozen upon the snow. Juncos don’t eat worms; they look for fallen seeds. And so it seemed that the bird flew off before quite reaching the C-shaped worm. And this other worm was about a foot away from the first worm. Robins were in the yard last week, and I can only hope that they returned today for a frozen dinner awaited. 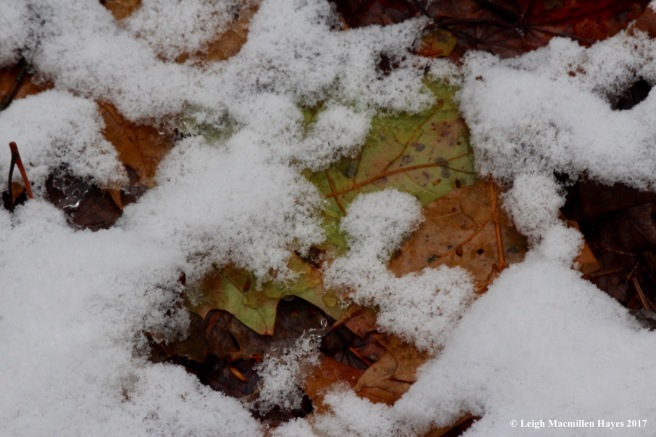 Into the woods I trudged, and the ever-changing colors and designs at my feet reminded me of works of art.

Some were palettes of mahoganies juxtaposed against white. A variety of textures gave the scene relief, much like an inlaid mosaic.

Others embodied interconnections; a mingling of lines outlined for emphasis.

Along the cow path, I noticed the rock people for the first time, their mouths gaping open.

The minute snow fleas would hardly sustain them.

As it does, my trail crossed the line, where power seemed to originate with its source . . . the sun.

And in the opposite direction, it flowed from pole to pole and onward . . . as if powering the mighty mountain. 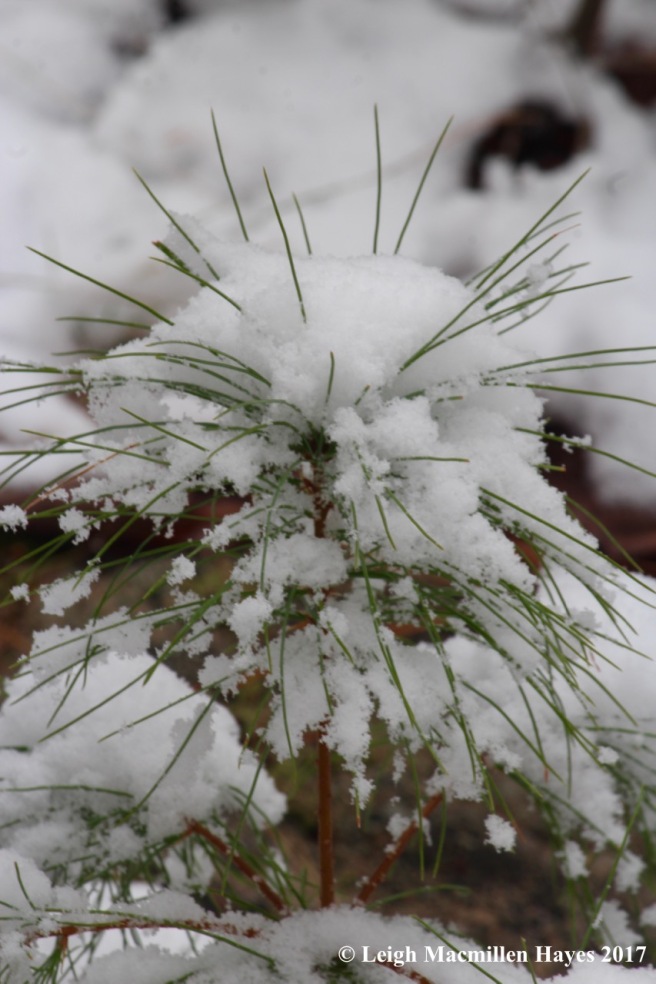 My journey continued into the land of the pines and their saplings, momentarily coated with decorative baubles.

And the red oak saplings I’ve been watching looked more festive than ever. 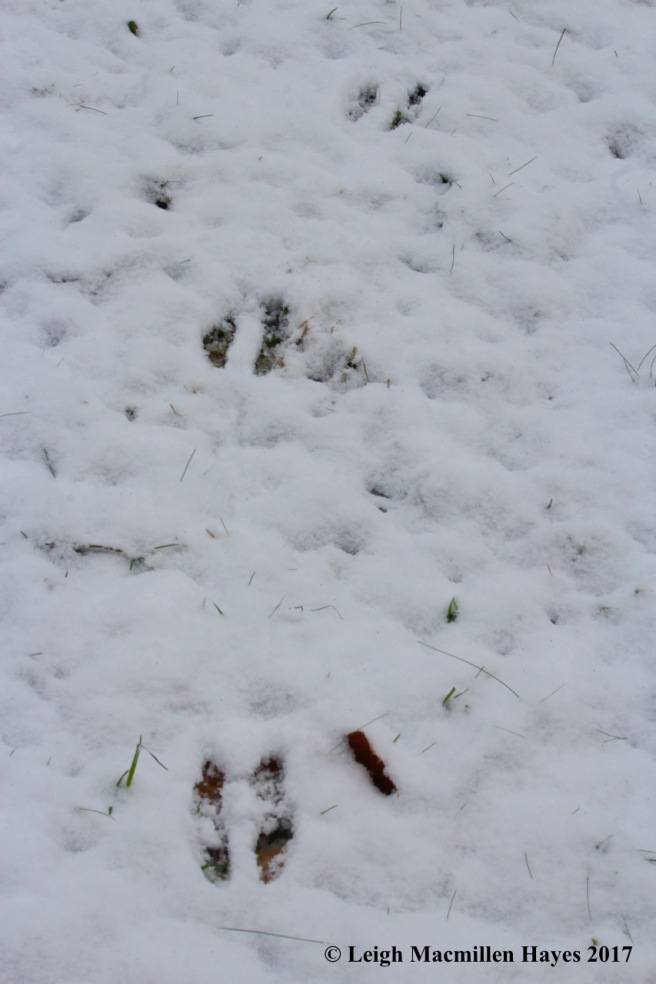 I was on a mission and soon found what I was looking for. Some tracks that looked like exclamation points led me to another source of sustenance that I wanted to check on.

The red squirrel’s cache had grown taller in the past week, but . . . 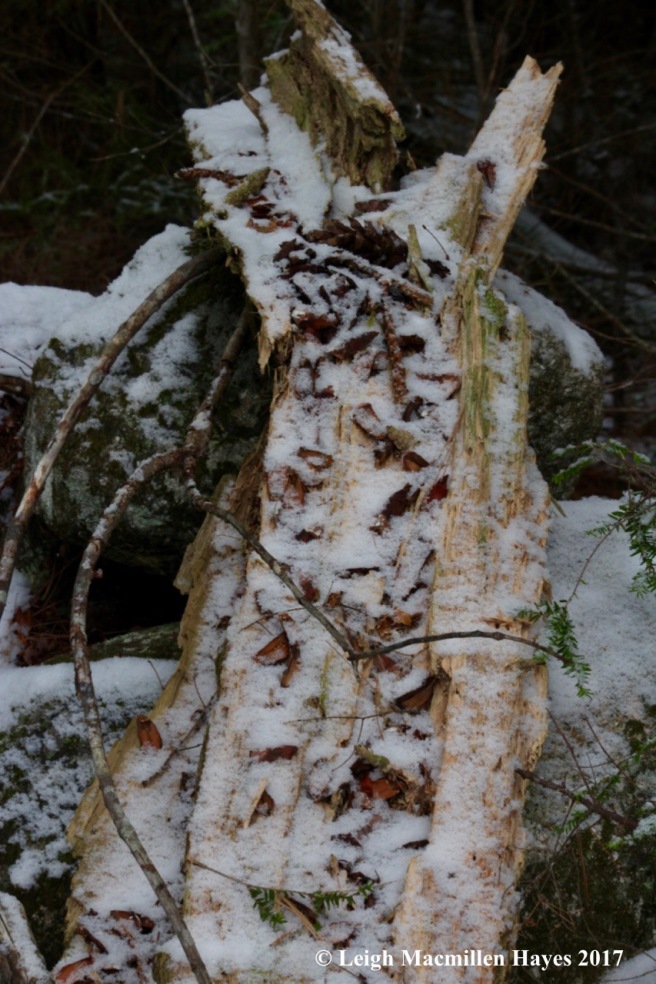 many pine seeds had been consumed in the refectory. All that remained were scales and cobs to show a number of dinners consumed. 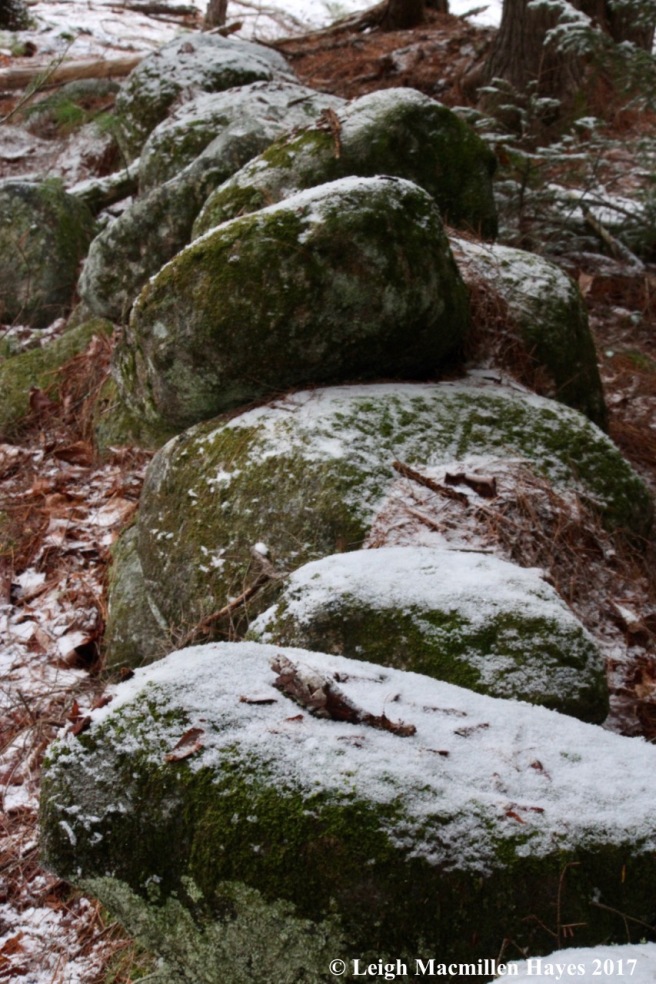 The dining hall extended beyond the reaches of the cache, for every table available was a table used. 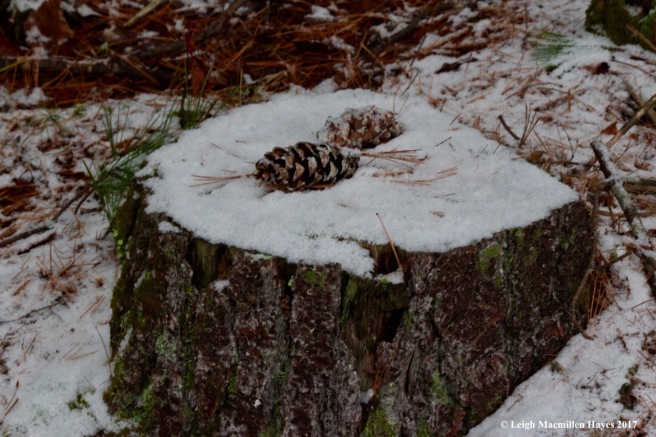 As I walked back toward home, I discovered another table awaiting a guest.

I was almost home when I stood under a beech tree. As winter embraces me, I find that their marcescent leaves create their own golden glow and warm my soul. 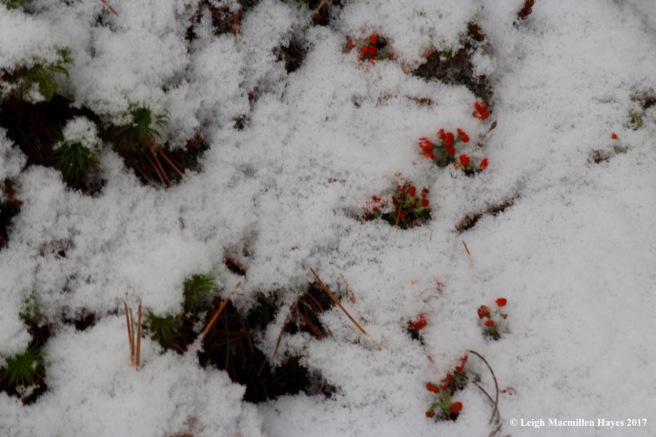 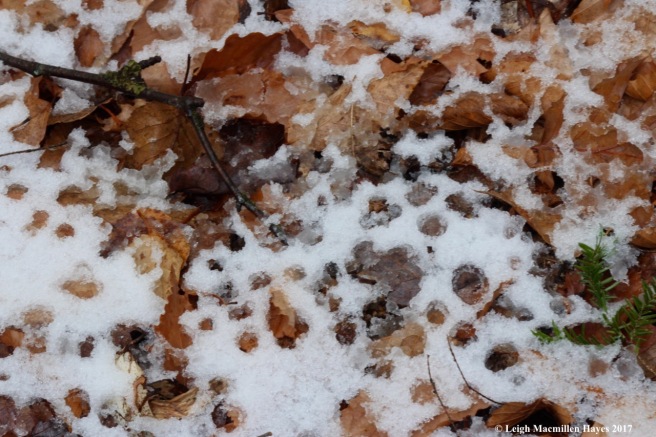 And then this afternoon, I joined a few friends for a gallivant across the Wild Willy Wilderness Trail beside Province Brook in South Chatham, New Hampshire. And the snowdrops created their own works of art announcing that the meltdown was on.

As we walked, we noticed delicate parasol-shaped fungi fruiting.

Their common name is Pinwheel Marasius, but in my mind the shape of the umbrella-like top above the wiry stem looked like a parasol and so I called it such. But to add to the confusion, I first called it carousel. Word association might get me there eventually, but it wasn’t until I looked it up in Lawrence Millman’s Fascinating Fungi of New England, that I realized my confusion. One of the fun facts from Millman is worth quoting: “Resurrection! Shriveled and inconspicuous, Marasmius species are rarely noticed during dry weather, but after rainy periods the tiny fungi revive–hence the nickname ‘resurrection fungi.'” And if not rain, then snow will make them rise again! 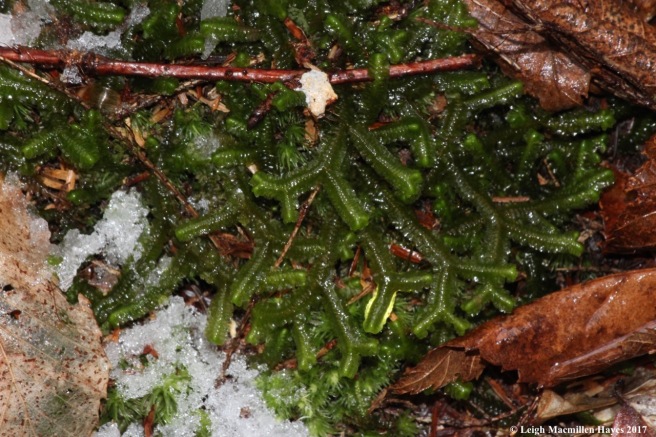 The water from the melting snow highlighted other lifeforms along the Wild Willy Wilderness Trail. Bazzania liverwort grew abundantly, but one in particular gave us pause . . .  for it glowed. And no matter what position we stood in to look at this worm-like beauty, it continued to glow as if it had a golden halo surrounding it. We had no answers–only questions and wonder.

Another find that had been marked with tape, for it too was special–a broken branch attached to a young tree. I’m stepping out on a limb here–pun intended, but I believe this was an example of a glue crust fungus that glues twigs together. Seriously? Yes. 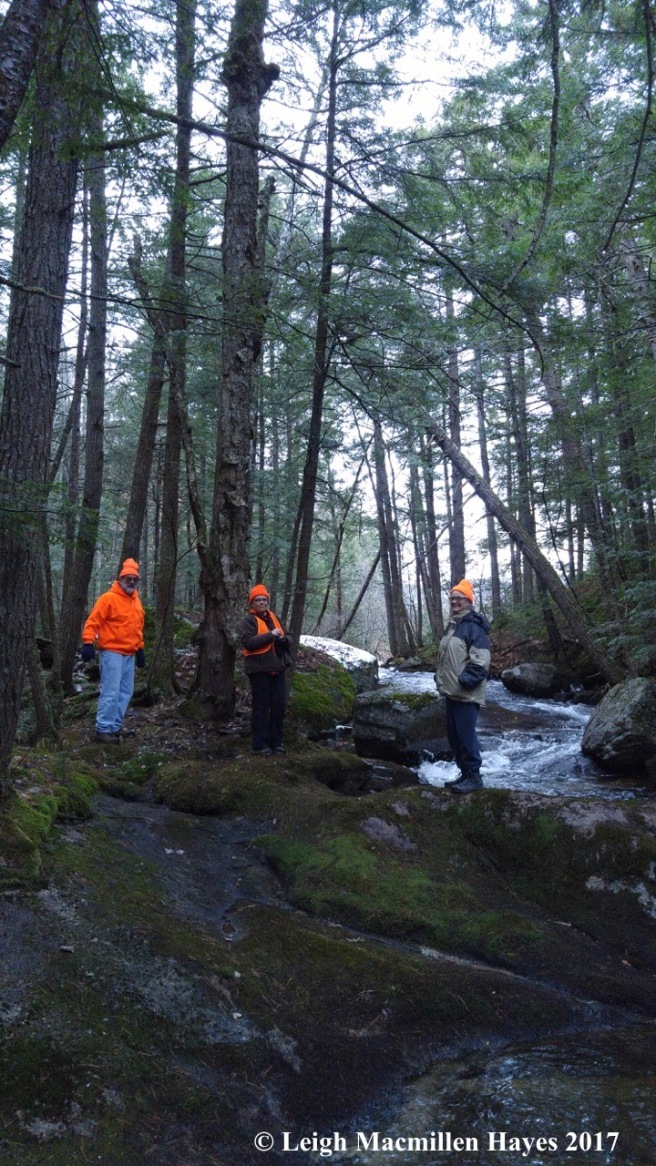 It was getting dark when we finally found our way to Province Brook and marveled at the water and ice forms. It was also getting close to the moment when we’d need to say, “See you later,” to Bob and Pam, for they’ll be heading to warmer climes soon. But we know they’ll be back for a winter adventure and then before we know it, spring will be here. And then, we hope the brook will be full with spring run-off from all the snow that is in our future. Until then, see you later we also said to much of the snow for it had almost disappeared.

But the ice art will continue to grow. 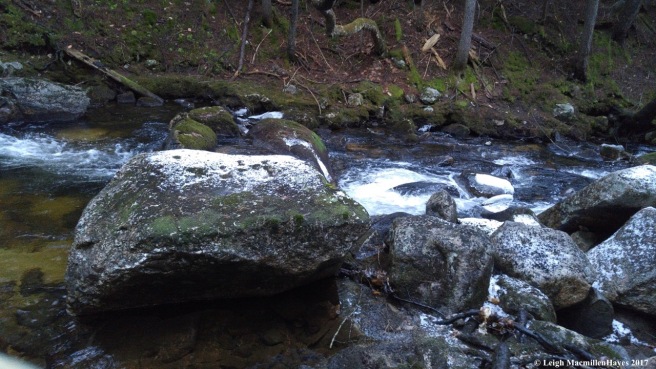 And the snow white magic will capture our minds again . . . one flake at a time. And with it, the wonders of the world will continue to be revealed.