Our hunger is never satisfied each time we gather. We always manage to see more, share more and learn more because of our combined knowledge. We also always come away with questions. And so it was this afternoon when about ten of my Maine Master Naturalist Lewiston classmates and I gathered with two of the programs founders, Dorcas Miller and Fred Cichocki, to explore a public park in Auburn, Maine.

From the get go, we bounced back and forth along the trail to look at the idiosyncrasies of trees and chat about the book, A Beginner’s Guide to RECOGNIZING Trees of the NORTHEAST.

And as they should, teachable moments kept presenting themselves, including a prime example of the bull’s eye target fungus on red maple bark. Suddenly, those who hadn’t quite seen the target in an earlier specimen had the opportunity to meet it and I trust they will recognize it going forward. 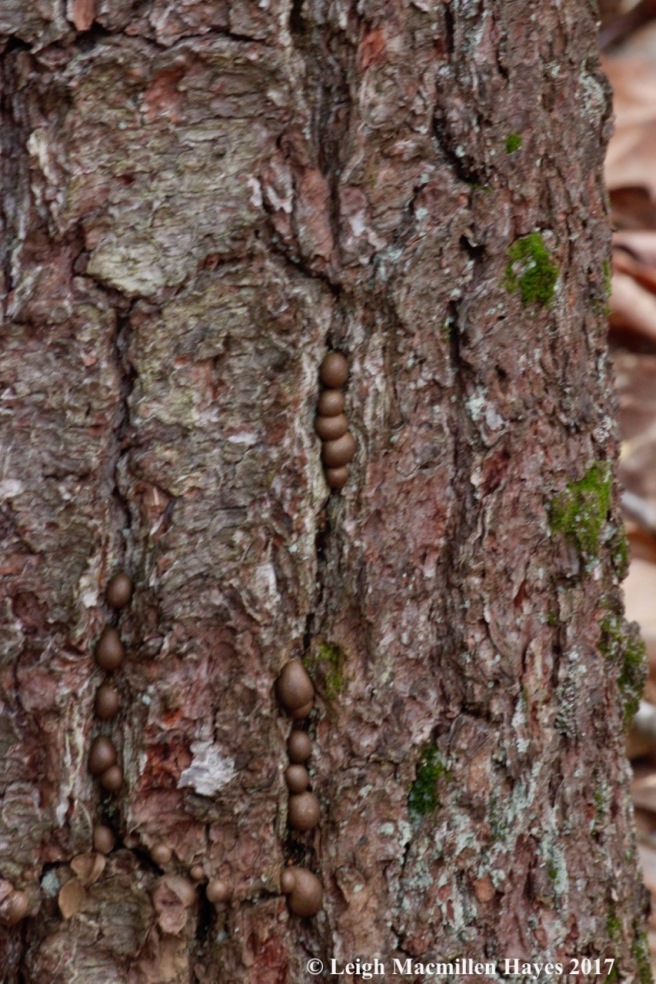 As much as we zigzagged down the trail, we also bounced off of each other as we shared our knowledge. Because we all suffer from Nature Distraction Disorder, and have the tendency to travel at a slower than slow pace, it was no surprise that a stop to look at a fungus closer to the ground meant that one of us noticed a slime mold in the crevasses of pine bark. A poke with a finger nail and the spores oozed out. 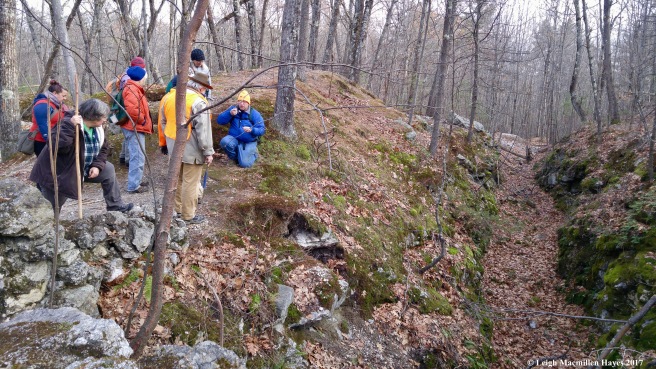 There were mosses to look at. Ferns to recognize. Lichens to question. And a trench that probably had been used to drain water back in the day.

Just beyond the trench, the star of the show took over. Dr. Fred was in his element as he reviewed the geological history of this place. 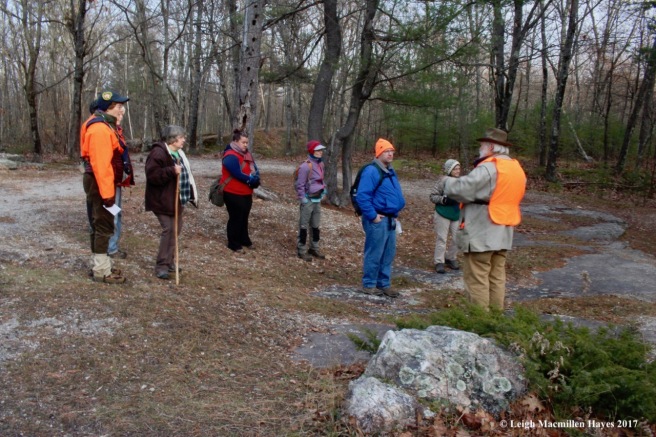 And when he talks, we listen.

We had come upon the first of the quarries, where feldspar had been mined in the early 1900s for porcelain. But, as Fred explained, while mining the feldspar, rare and unusual minerals had been discovered including a phosphate mineral called apatite. 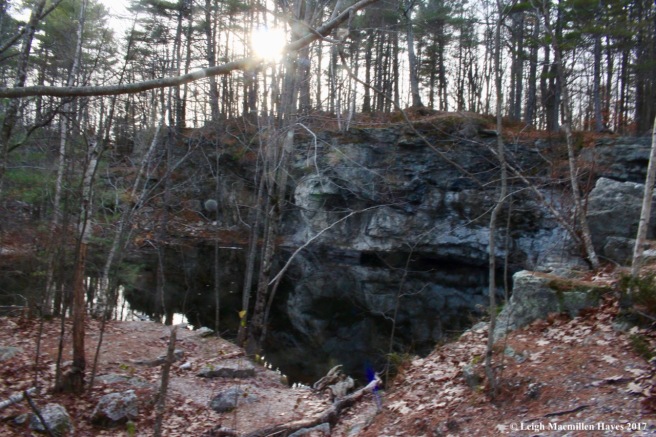 From there, we circled down and around and looked across at the Maine Feldspar Quarry.

We learned from Fred that the wall of the feldspar quarry was a demonstration of light-colored pegmatite just above the water, topped by gray metamorphic rock.

Next, we encountered a fractured wall of fine-grained basalt–an igneous vein that formed a dyke.

Basalt is fine-grained due to the molten rock cooling too quickly for large mineral crystals to grow. Typically, it’s gray to black in color with rust from iron oxidation. 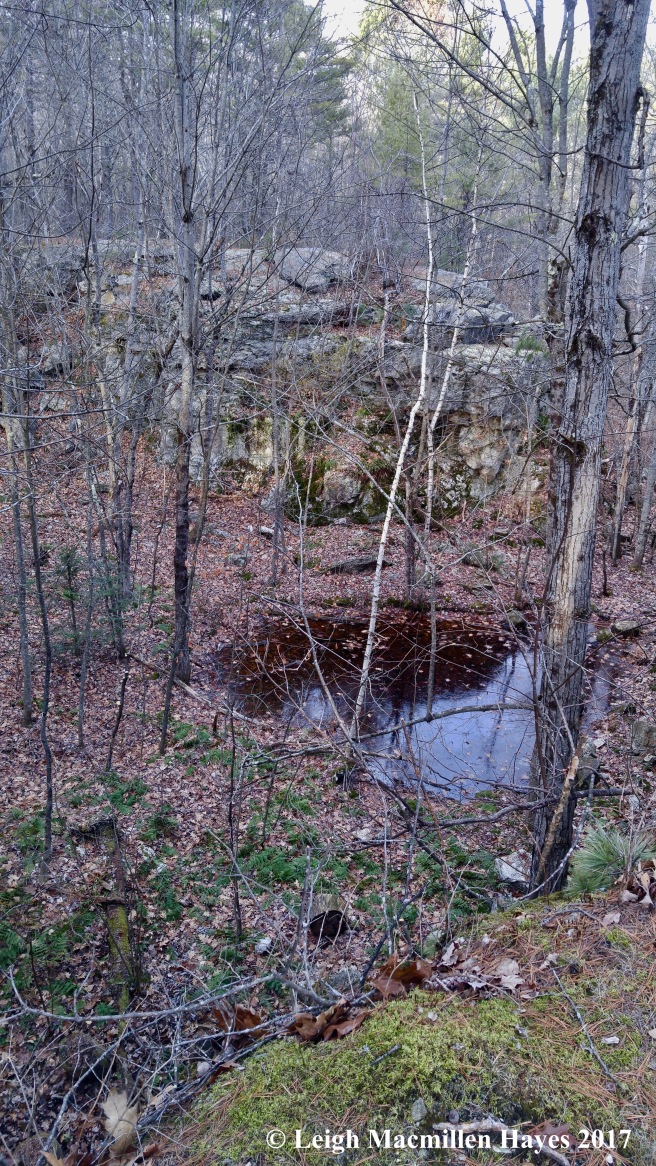 From there we moved on to another quarry, where our attention was not so much focused on the rocks as on other things.

For deep within, we spied several red squirrel caches and dining tables. Later, we watched a chipmunk take advantage of the squirrel’s work. Minerals aren’t the only gems of choice at this place. 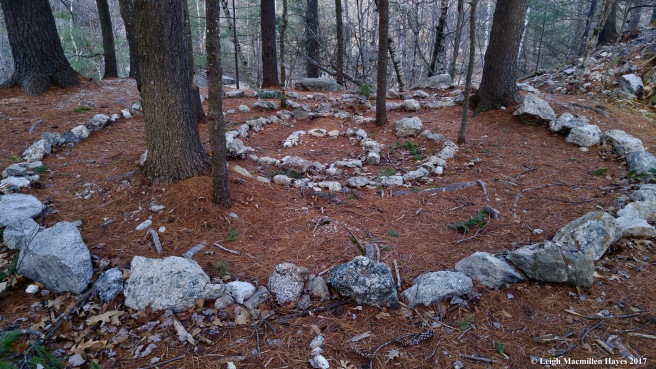 As we made our way around to a quarry dump, we discovered a labyrinth that made its way around the pine trees. I followed it to the center–struck by the fact that we were examining rocks dating back to the Carboniferous period, and I was walking a path based on an ancient archetype dating back 4,000 years. Time. Worth a wonder.

In the dump field, we scattered about looking for souvenirs and then paused at a boulder to examine its offerings.

On the back side, Fred pointed out several depressions where tourmaline crystals had been discovered and removed. We were awed.

There was so much to see from milky and smoky quartz to feldspar, mica and garnet, but my favorite find was more graphic.

Graphic granite–a pegmatite of igneous origin that splits in such a way to make it look as if stories have been expressed with a fountain pen. In this case, I was sure the story was about birds flying over mountains.

The quarries were our turn-around point. We had begun our adventure with plans to visit them quickly, then explore the outer trails of the park, but as we knew would happen, two and half hours later we’d only made our way to the quarries and it was time to head out because the sun was sinking.

That didn’t matter for happy were we to spend time exploring together and whetting our naturalist appetites at Mount Apatite.

8 thoughts on “Whetting Our Apatite”