In the name of tradition, today the Greater Lovell Land Trust hosted a hike up Whiting Hill at the Heald and Bradley Ponds Reserve to welcome the new year. Last year’s inaugural hike attracted eight of us and the temp was so comfortable that we began to shed layers as we climbed. This year, six of us made the trek and conditions were a bit on the cool side–um, that would be an understatement. 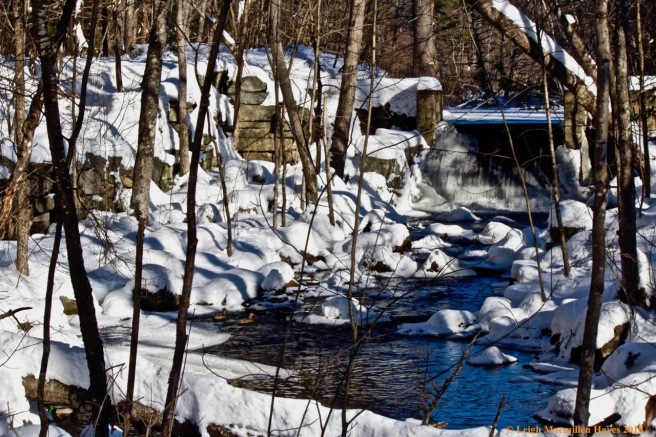 But . . . the crisp air enhanced the beauty all around us and we began with a brief stop to appreciate the dam. What we didn’t realize until a minute later was that we’d also startled some wood ducks who immediately flew off. 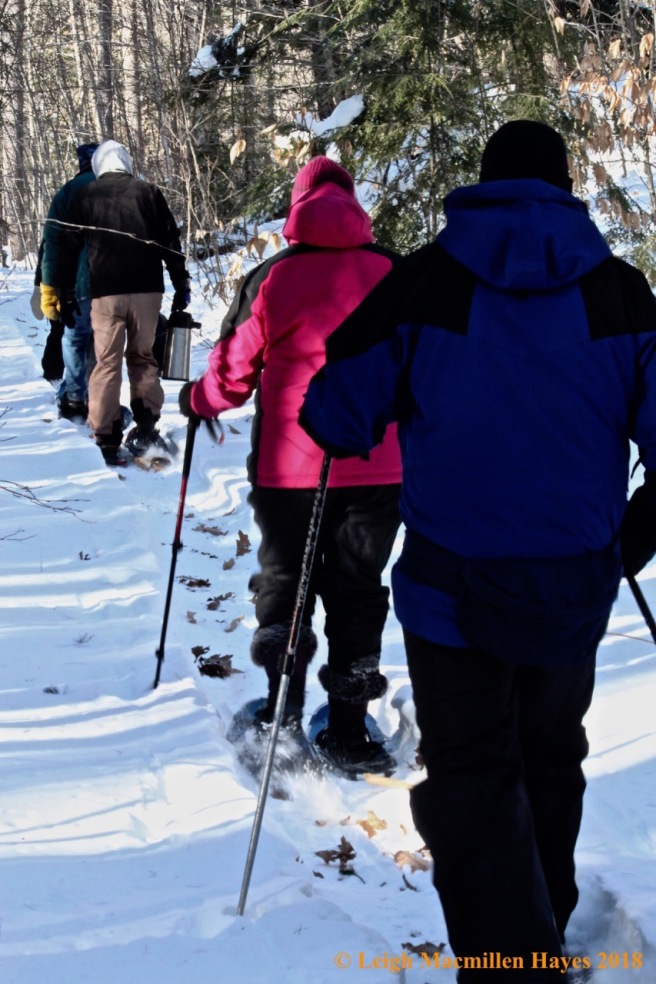 Though our group was small, old friendships were renewed and new ones formed as we shared the trail.

Periodically, we stopped to admire others who had carved their own trails. We read the stories of many mouse journeys, a fisher chasing a red fox, red and gray squirrel adventures and these–an otter bounding through the landscape.

Otter troughs are about 6-10 inches wide, this one being the larger size. And in what can seem like two by two format, their front feet touch down as back feet rise, coming forward to land where the front feet had been just moments ago for they are bounders. Occasionally, this fun-loving critter chose to slide down on its belly. 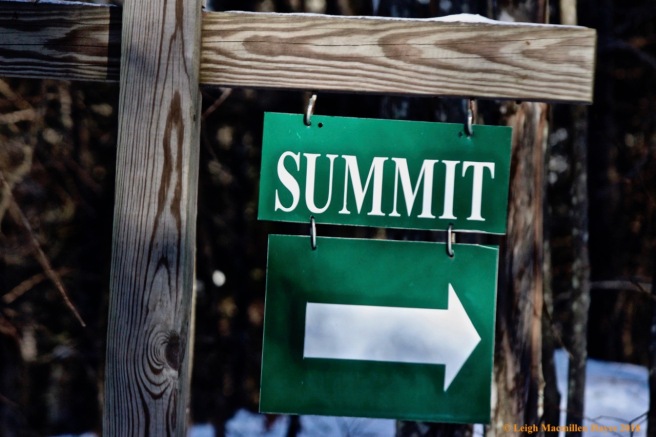 By the time we reached the summit sign and turned right, we weren’t sure what to expect. Would it be so cold that we’d take a quick peek at the view and retreat? Would we be able to toast Lovell as planned?

As it turned out, a few in our group found their hands getting too warm, so welcomed a chance for a mitten break.

Others sat for a moment on the bench and left behind impressions.

One of our docents had made pumpkin bread to enhance our toast and we brought a carafe full of hot water for cocoa or tea. 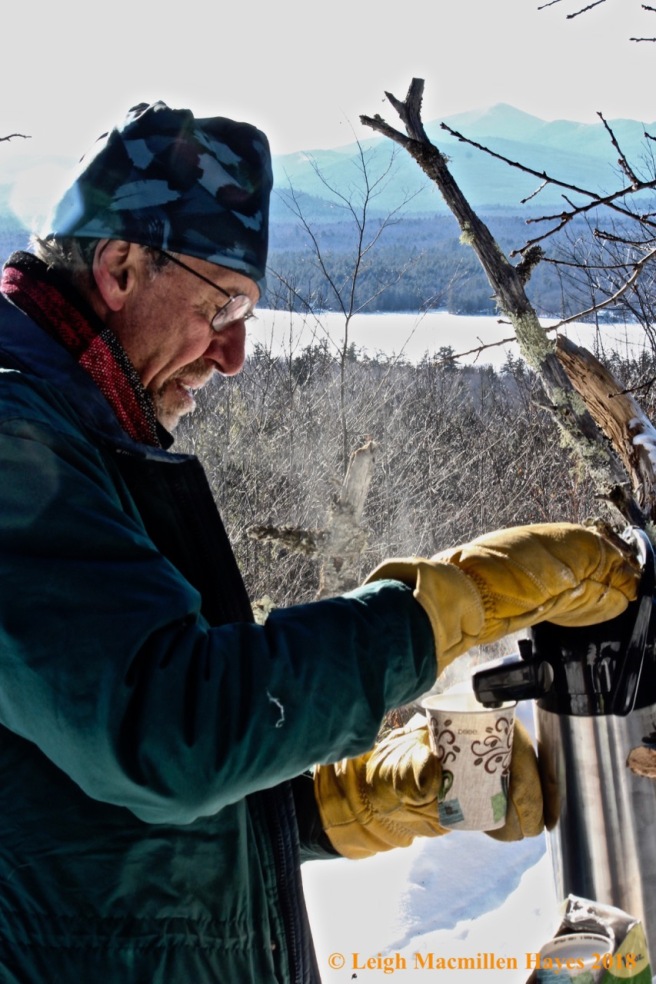 The water was very hot indeed and warmed us right up. 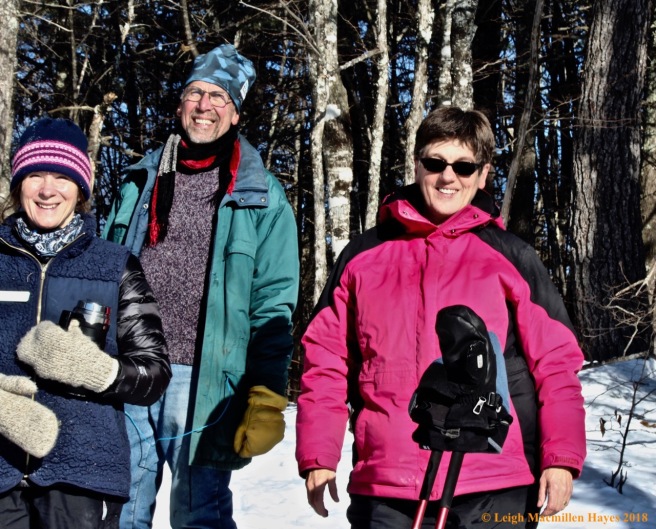 And so it was with big grins that we shared camaraderie at the summit, enjoyed the view and noted the fact that it wasn’t too windy and the cold air was tolerable. 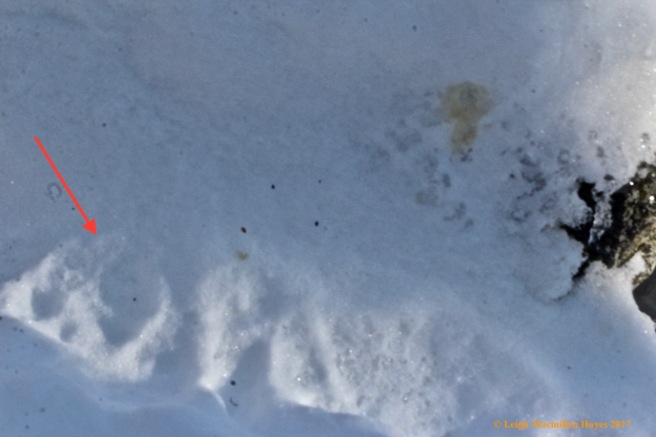 When we did finally pack up to make our descent, we snowshoed first over to the bench on the Heald Pond side of the summit, where last year we found a sacrificial squirrel upon the altar. Prints left behind indicated a fox had dined there. Of course, a few of us got excited about the kill site and perhaps scared others away from joining us again this year. But . . . we just like to know what the mammals have eaten.

Today, an offering of another kind at the same bench. We found more fox prints all around it and as is typical on a raised object, a hint of pee–its skunky scent indicating it was a red fox. (Yes, I sniffed the pee. By the way, deer pee smells rather piney–just saying.) 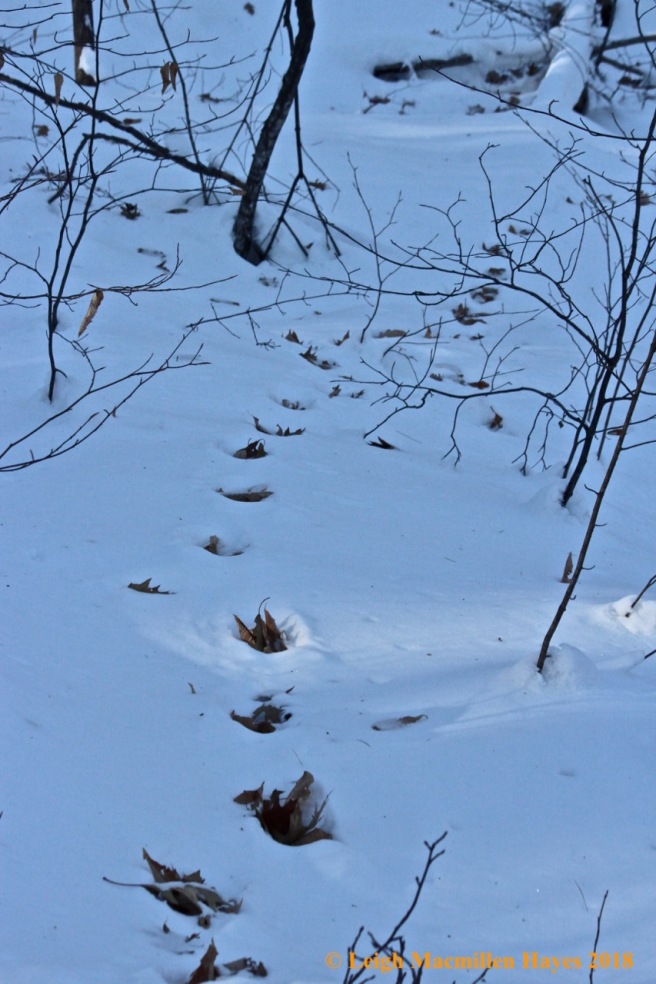 On the way down, more fox and mouse prints everywhere we looked, some old, others fresh. But also, deer tracks a few days old and filled with beech leaves that had recently blown down. It was much colder on our descent given that we were on the eastern side of the mountain and for the most part out of the sun.

But that didn’t stop us from making a quick trip to Otter Rocks where two members of our party told us they had the great joy of watching a couple of otters frolic last summer.

We stepped onto the ice and looked back at the large, erratic boulder that marks the point, and reveled in the sight of lichens, dragonfly exuviae and ice displayed. 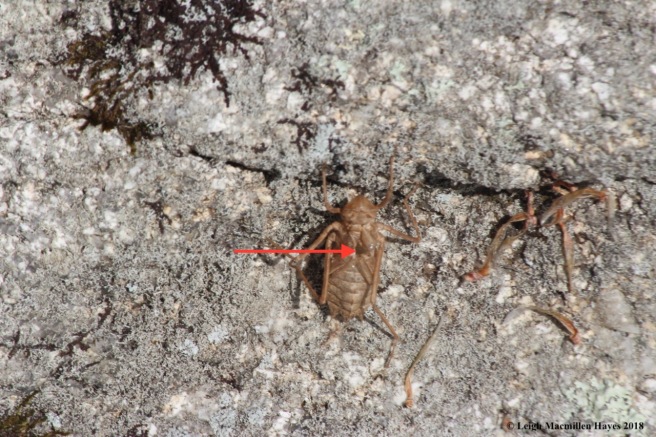 We always check the area for dragonfly exoskeletons but now that the ice has frozen, we can visit the rock’s backside for a change. A few remain, and it was easy to see the hole from which the dragonfly had cast off its external covering during last spring/summer’s moult. 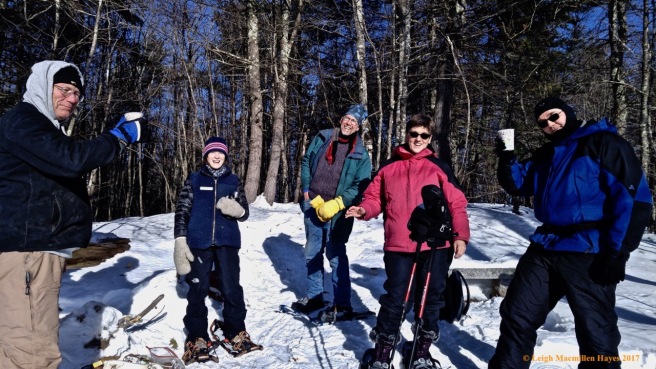 The temperature dropped drastically by Heald Pond and wind picked up, so we soon made our departure and headed back to the parking lot.

We were, however, tickled with the knowledge that we’d taken the opportunity to hike on this First Day of 2018. And while at the summit of Whiting Hill, on the count of three, we’d shouted Happy New Year to  Lovell, Stoneham, Stow and Sweden. Did you hear us?