I’d never heard of the trail system my guy and I hiked this afternoon until my friend Marita introduced me to it about a week and a half ago. And then, the temps were frigid and our time limited, so we only snowshoed to the Kettle Hole Bog. But . . . that, in itself, was well worth the journey on December 28, 2017.

It blows my mind to think that kettle holes are unique features formed over 10,000 years ago when big chunks of ice became stranded and partially buried in glacial outwash or other coarse ice-contact deposits. Eventually, the ice chunks melted, leaving ponds in holes in the ground, with no inlets or outlets. Among the vegetation variety in such a bog is black spruce that stood tall like church spires.

Because our initial visit followed the ice and snow storms of the previous weekend, most of the spires donned winter caps. 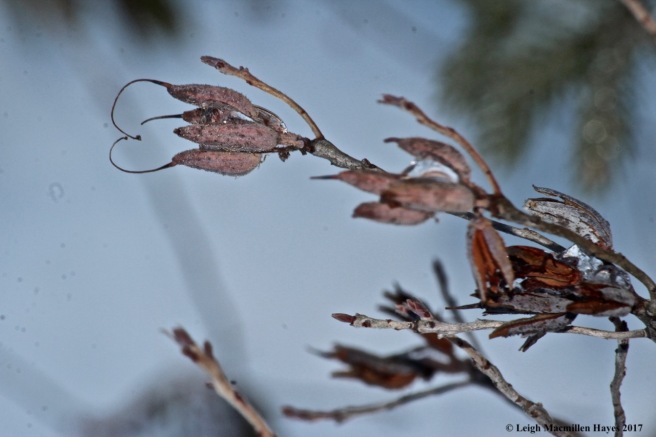 And in the low shrub level, rhodora and other heath shrubs offered their winter form. 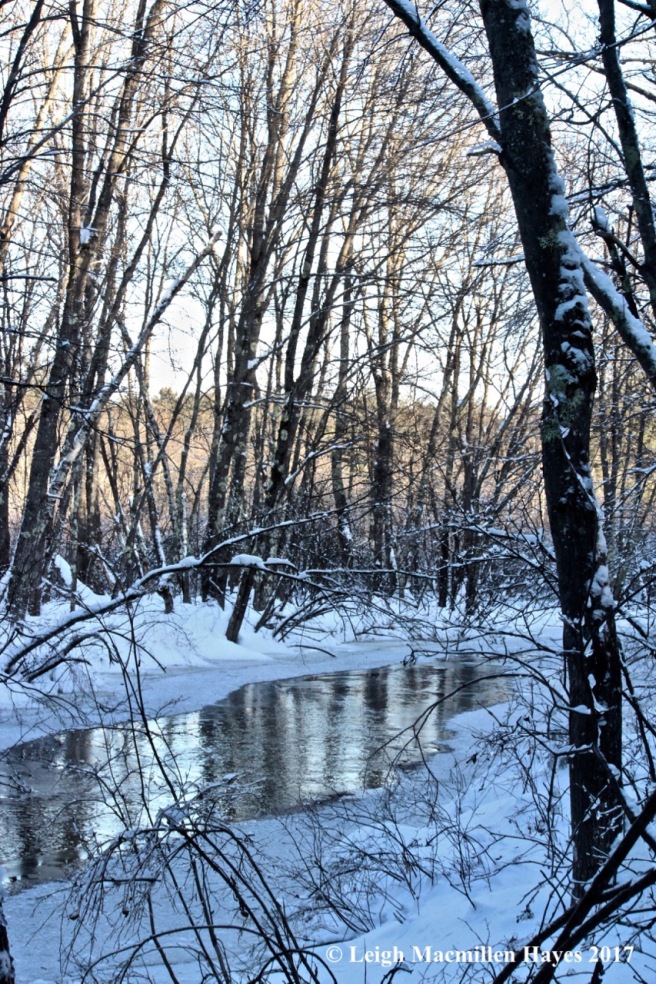 We were traveling in the Tenmile River Demonstration Forest and within a few minutes of the kettle bog, Marita and I reached the river.

It was late afternoon when we visited that day and the low temps meant lots of ice had formed.

Of course, the ice storm of Dec 23rd added to the frozen display.

And so, when my guy and I visited late this afternoon, I was curious about our finds. Some trees still sported icy sculptures, but much of it had blown down in recent winds. Instead, we looked through a different stained glass window as we traversed the property. 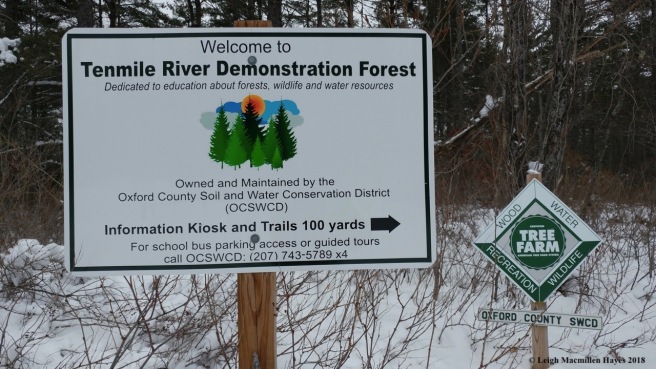 The Tenmile River Demonstration Forest was donated to the Oxford County Soil and Water Conservation District (OCSWCD) in 1950 by Frank Merrifield, three years after the Great Fire of 1947.

Back in October 1947, catastrophic wildfires erupted throughout Maine during what became known as “The Week Maine Burned.”

It hadn’t rained for 108 days and the dry woods were like tinder. Here in western Maine, Fryeburg, Brownfield and Denmark thought they had a fire under control, but overnight a strong wind blew and gave it new life. About 2,000 acres burned by the next night as the fire spread to the edge of Brownfield.

With the winds continuously shifting, town folks began to panic. Farmers either turned their livestock loose or herded them to neighboring towns. Others packed as many belongings as they could and evacuated.

By morning, most homes and public buildings in Brownfield were mere piles of ash. Stately places including the Farnsworth Place where Dr. Philo Farnsworth, a pioneer in the field of television, spent his summers, had burned. Churches, schools, the post office, Grange hall, library and town hall all went up in smoke–only twenty houses survived. In the end, 85% of the town was destroyed.

This past fall, I had the honor of listening to storyteller Jo Radner honor the stories of Brownfield residents with her rendition of Burnt into Memory. If you ever have the chance to be in her audience, I strongly encourage you to attend and listen. Jo not only shares the stories, but also the voices.

According to the property brochure available at the kiosk, “The District Supervisors replanted the property with red and white pine.” The replanting took place between 1950 and 1960. The brochure states: “It was their plan to turn the land into an example of wise and sustainable forest management and to use it as an education resource area to demonstrate good conservation management practices.”

Immediately behind the kiosk the whites and reds were obvious–white pines to the left and red to the right.

As we set out today, we found ourselves breaking trail for it seems not many wander this way in the winter. Our intention was to traverse several loops along the land of rolling hills.

In 2012, the pines that had been planted back in the ’50s and ’60s were harvested with the intention of creating an open forest to allow sunlight to reach the forest floor. The overall goal was to encourage new growth and regeneration. 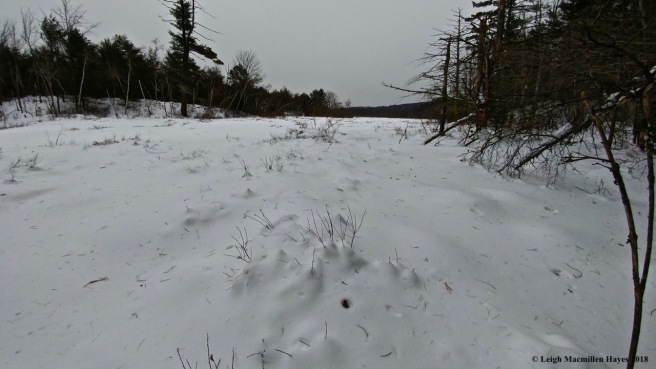 Our journey along the Wetland Trail led to a shrub bog and . . .

a marshland above Round Pond. Where’s Waldo? Or rather my guy? I didn’t realize it at the time, but he had found a branch and was headed to the wetland to check on the ice. Meanwhile, I stood on it.

As we broke trail, we noticed others who had done the same, including junco foot and wing prints. 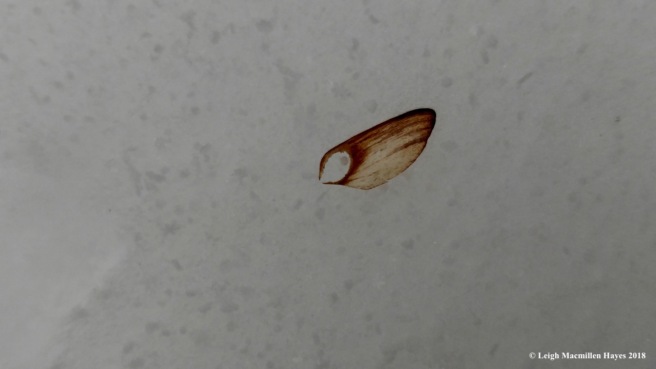 And by those footprints, we kept seeing Eastern hemlock seed samaras–minus the seed. How cool is that? While the seed depends on its wing to fly to a new home, our winged friends only care about the seeds.

A porcupine had also traversed the property and as time would tell, it knew much of the over-200 acre forest.

Snowshoe hare also traveled here. We were thankful for their teachings of packing trails to make movement easier, especially since we were taking turns breaking trail today. Note the touches of scat along the runway of this particular hare. 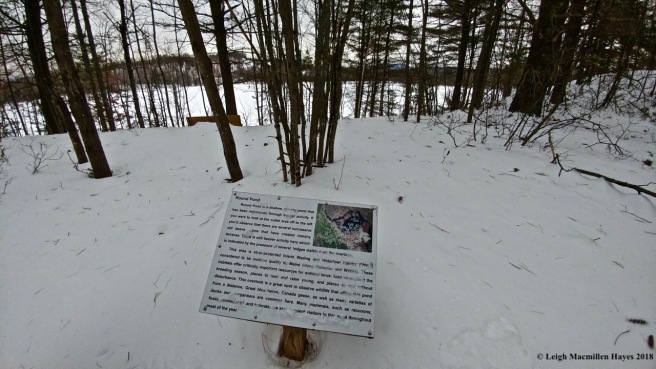 As a demonstration forest, the Oxford County SWCD received a grant in 2012 from the Maine Outdoor Heritage Fun to not only show how a forest harvest can be carefully planned and carried out, but also to install interpretive signs that point out special features and describe best management practices. 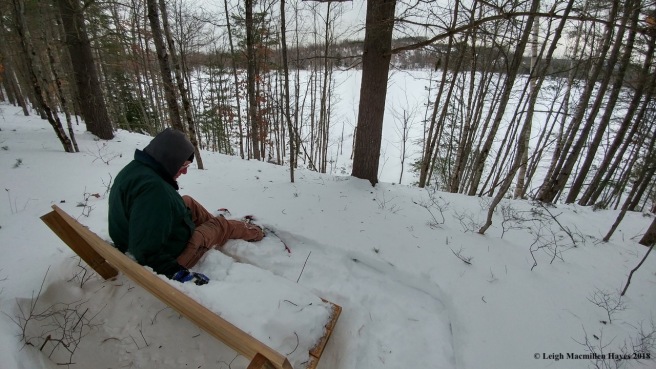 Also installed at key points, benches offering views. If you go soon, you can thank my guy for clearing the seat overlooking Round Pond. 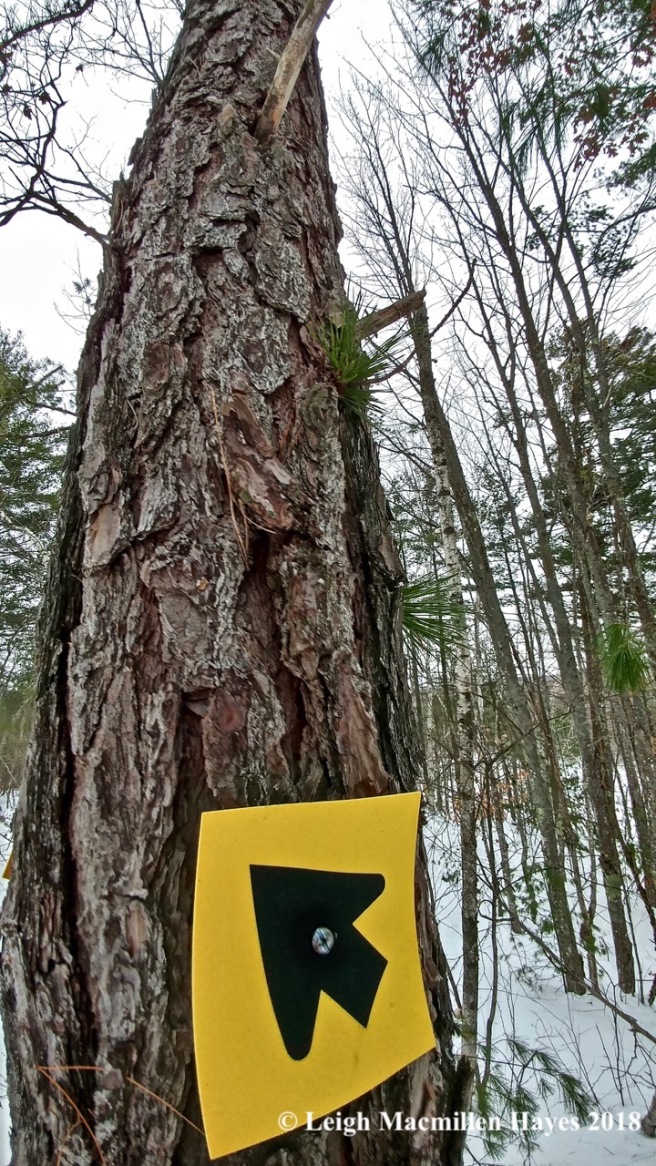 Continuing on, we noted how well marked are the trails. And sometimes such marks made us notice other things, like the fact that this chosen tree was a pitch pine, an important fire adaptive tree. Such adaptations allow it to establish and/or regenerate on burned sites through a variety of options offered by the tree and its buds.

Our continued journey took us to the bench and signage for a beaver lodge, though with another foot of snow you’d hardly know it.

Before the bench, we could see the old lodge, though it seemed abandoned given no sight of a vent on it or any new cuts nearby. 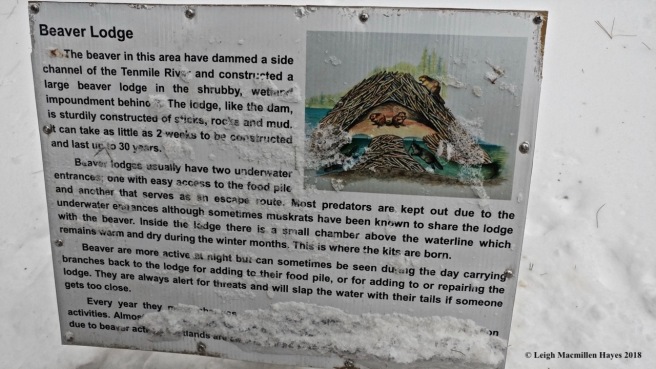 But still, a sign once cleared, describe the activity and what one might expect to see within such a home. 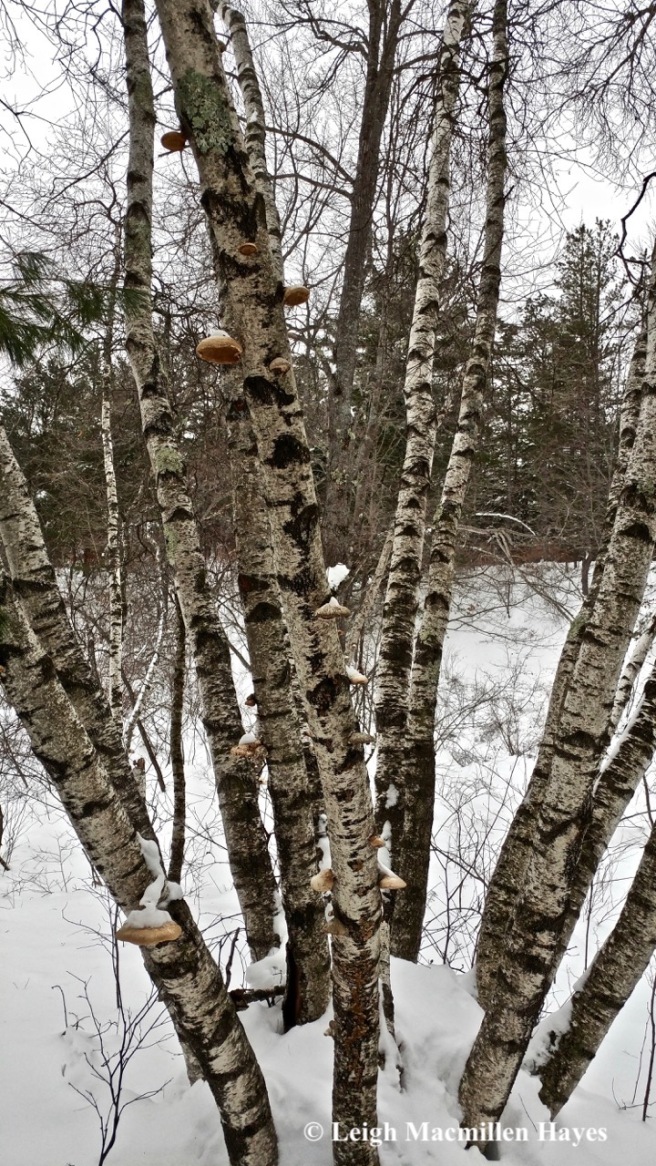 Behind the bench, a family of gray birch stood taller than most given that December ice storm had causes so many of them to bow down with the weight of the world. 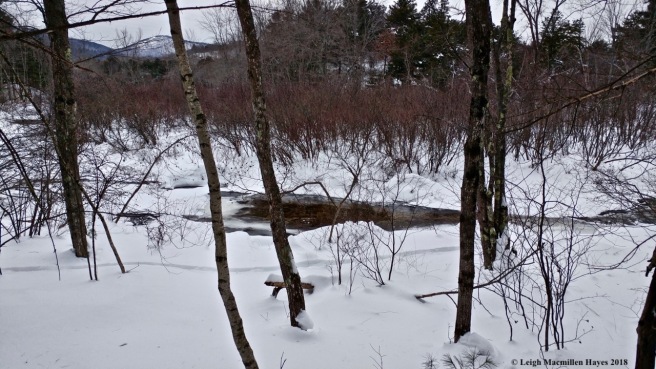 From the lodge, we went in search of a couple of beaver dams along Tenmile River, and finally spied some open water. Apparently we weren’t the only ones to see it. Do you see the trail beside the river? How I wanted it to be that of an otter. But, reality struck and it was a deer run. 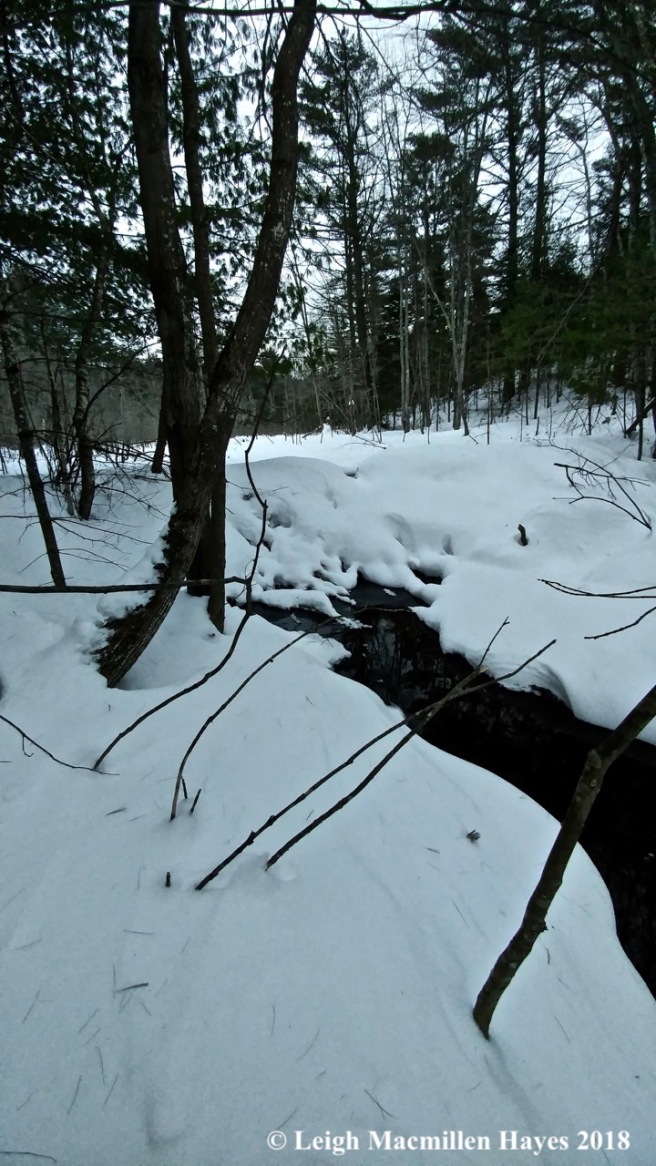 As the day darkened, we did find an old beaver dam, but again, not recent works. 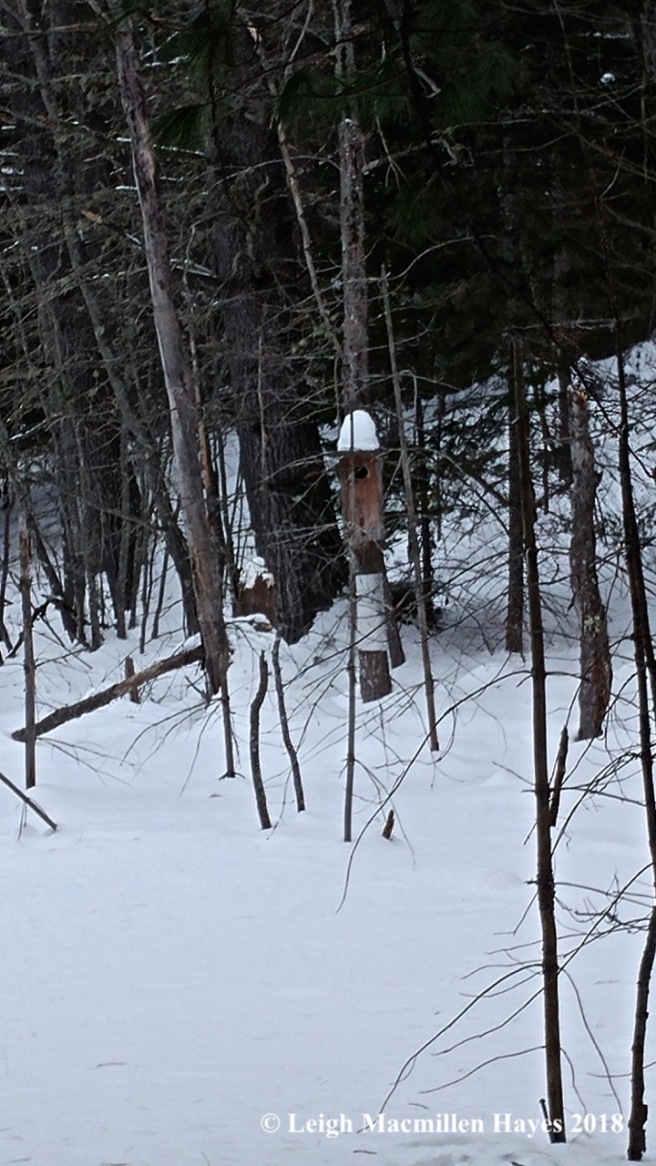 And just above the dam, a wood duck box. As the brochure notes, “A harvest was carefully panned and carried out to show how forestry, wildlife habitat conservation, recreation and water resource protection could all be taken into consideration.”

Not far from the river, I found a shrub I immediately recognized for it is a wee bit different from others–witherod or wild raisin. 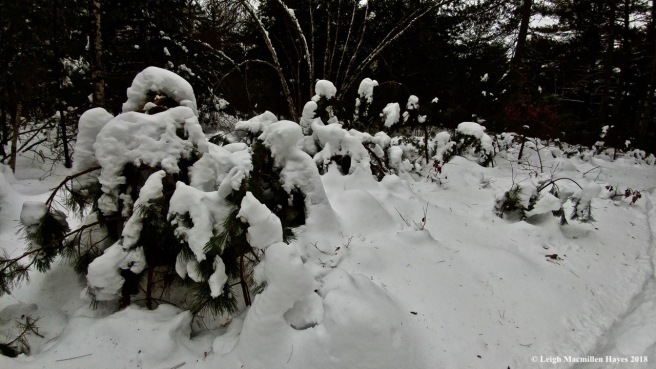 As we continued on our way out, for there was more to discover but the night was drawing close, white pines sagged with the weight of the recent bomb cyclone.

And as it should be along this trail, red pines on the opposite side showed that they, too, had bowed to the burdens.

But what struck me about these two species, red pine to the left and white pine to the right, with my guy’s tracks between, was the fact that the Oxford County SWCD had had the foresight to acquire this land and follow up on its purpose as a demonstration forest.

Our journey on this Mondate was only about four miles along the Tenmile River loops, but already, we can’t wait to return and learn what else this property has to offer.