This morning found me joining two fellow Maine Master Naturalists for a reconnaissance mission along a property I’d never explored before–nor heard of until about a month ago.

Robie’s Meadow is located on Scribner’s Mill Road in Harrison and owned by the Western Foothills Land Trust.  Our plan was to explore the meadow in preparation for an upcoming WFLT/GLLT guided hike planned for Saturday, January 27 from 9:30-12:30. For the GLLT, it’s rather like a pop-up event, since we had planned it after our regular winter schedule was published. But, that’ll make it more fun because it will be an unexpected opportunity to explore in a neighboring town. 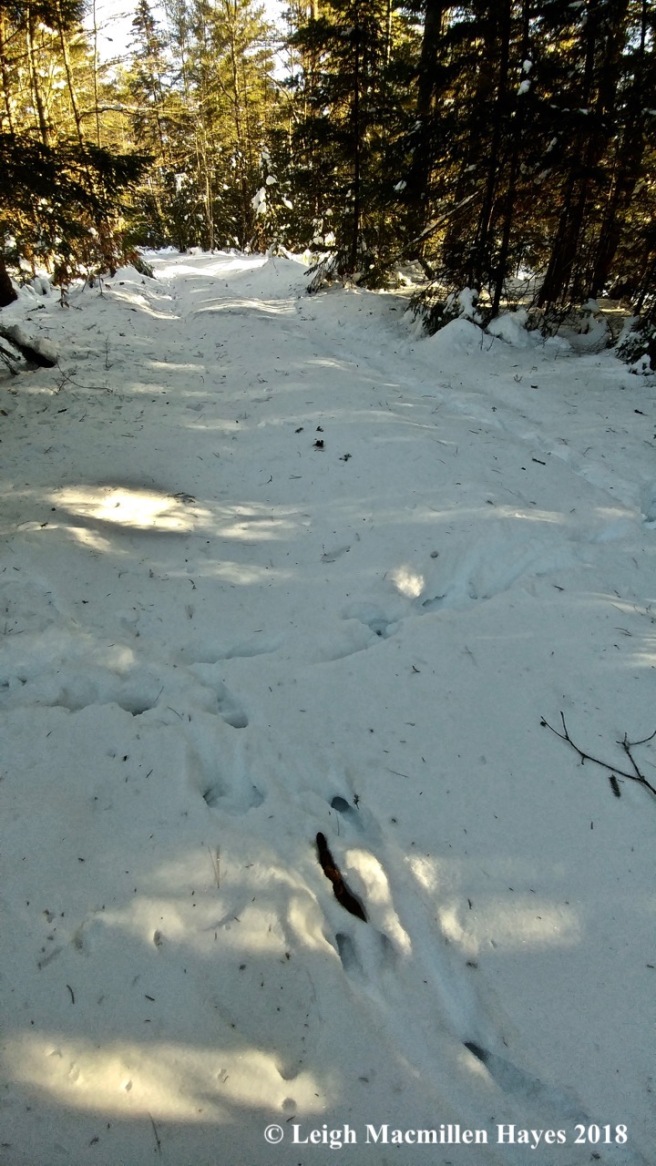 Once we climbed up over the snowbank this morning, we were immediately greeted with tracks. And then, we spied something else on the snow. 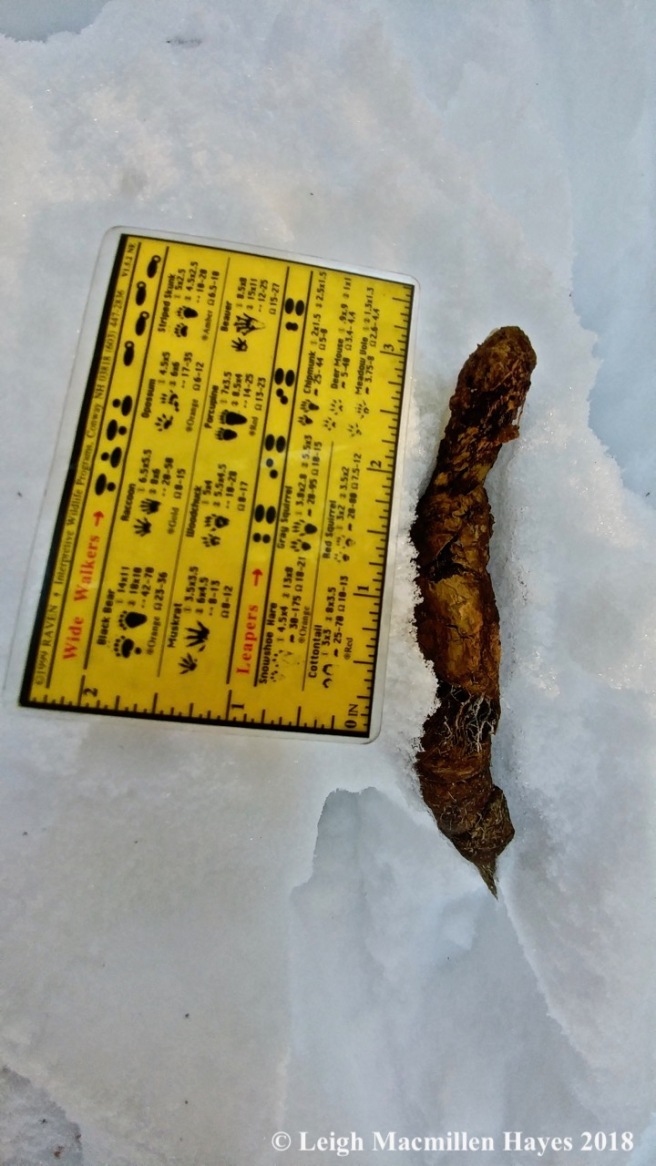 a sniff that consisted of a musky, skunky odor made us rethink our conclusion. A red fox had most definitely left its calling card behind.

In fact, as we continued on, we realized that it had left many calling cards–in hopes of attracting some attention. The size of that scat, however, continued to haunt us for it was much larger than fox scat should have been. Perhaps we misread some of the fox tracks, for we thought two had traveled the same route, but was it really fox and coyote? We do know that they were made about the same time, given the snow conditions. And so, our best guess was that the deposit was made by a member of the Canidae family. With that conclusion we felt safe. 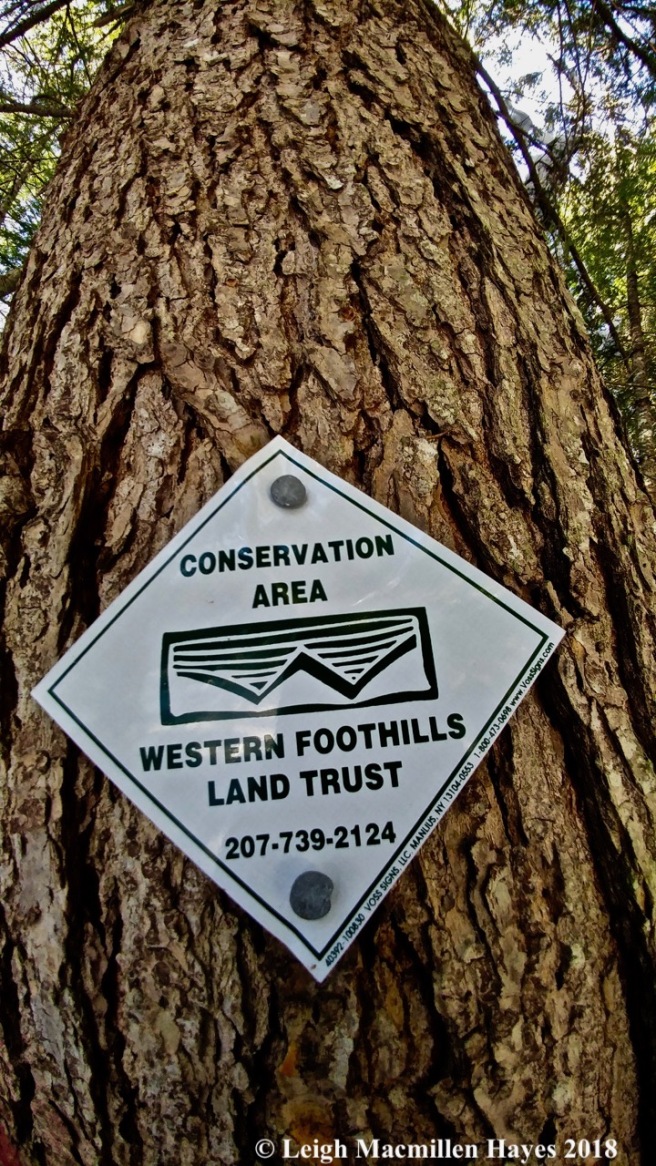 We were so distracted by the tracks we kept finding and following, that it took us a while to cross the right-of-way to the actual land trust property, but at last–success. 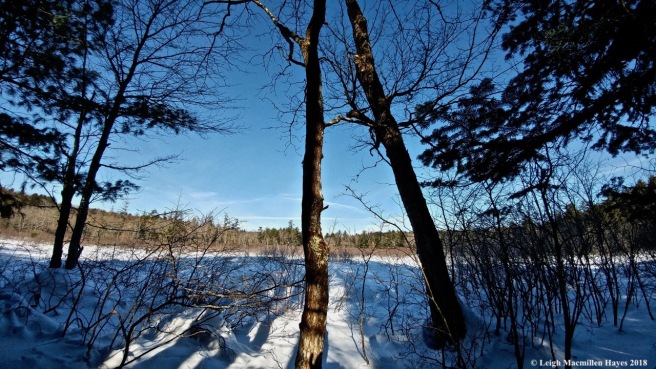 The meadow opened before us, covered as it was with morning shadows.

As much as we wanted to explore it, Russell Brook was open in spots and the snow deep, and so we decided to follow the brook for a bit instead. 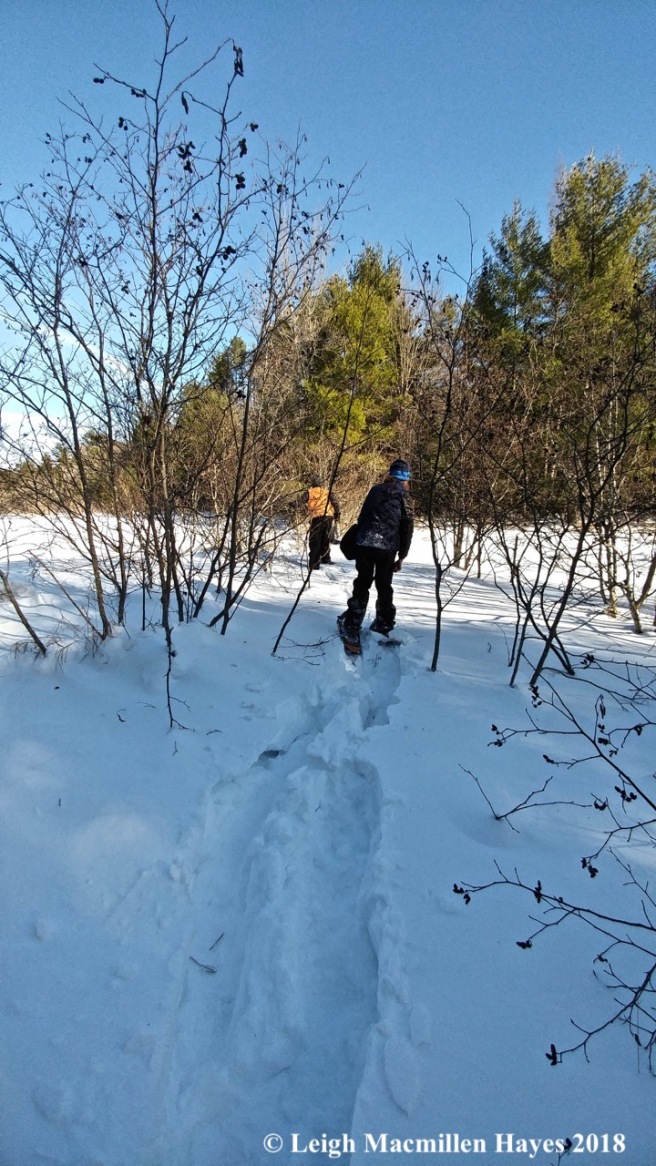 Breaking trail wasn’t always easy, given the depth of the snow, but Alice persevered for she knew the way, and Joan and I followed. 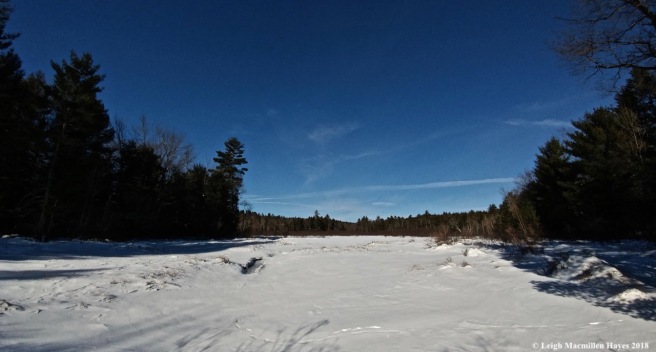 Finally, we reached a point where we could cross and just beyond our reach we spied tracks. How we wanted them to be otter or some other member of the weasel family. Alas, when we reached the other side, we discovered it was the red fox yet again. It always amuses me how a critter becomes “our” critter when we begin to encounter signs of it with frequency and so this was “our red fox.”

We were a bit disappointed that though we’d seen weasel tracks toward the beginning of our adventure, no other members of the mustelid family shared their presence. Instead, it was to red squirrels that we next turned our attention.

And Alice gave us a new insight. I’ve always said that snowshoe hare prints remind me of  lobsters. Well, today she pointed out the fact that squirrel tracks look like Batman’s mask. I will never look at squirrel tracks the same again.

We found squirrel homes tucked under logs and trees. 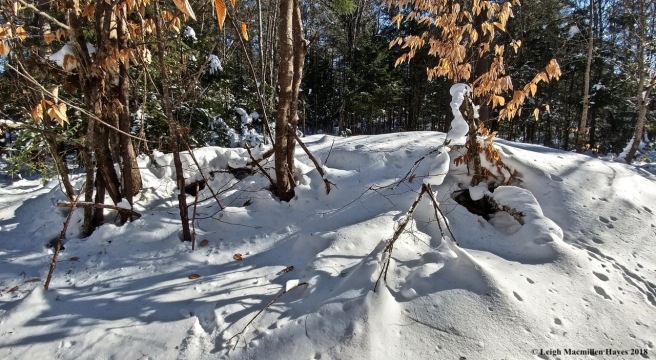 And one very fancy squirrel condo with plenty of openings on different levels. It reminded Joan and me of a certain porcupine condominium (aka stump dump) on a property under conservation easement in Lovell.

Speaking of porcupines, I kept commenting that we were in porcupine habitat and hadn’t seen any signs. Until . . . we did. And when we return, we’ll do some backtracking in search of its den or feeding tree(s).

We continued our journey, seeing much the same along the way. At last, we turned right onto a snowmobile trail where we followed turkey tracks out to the road. Our time together had drawn to a close, but we’re excited about the possibilities for the hike on January 27th. Check out both land trusts’ websites soon for more details. 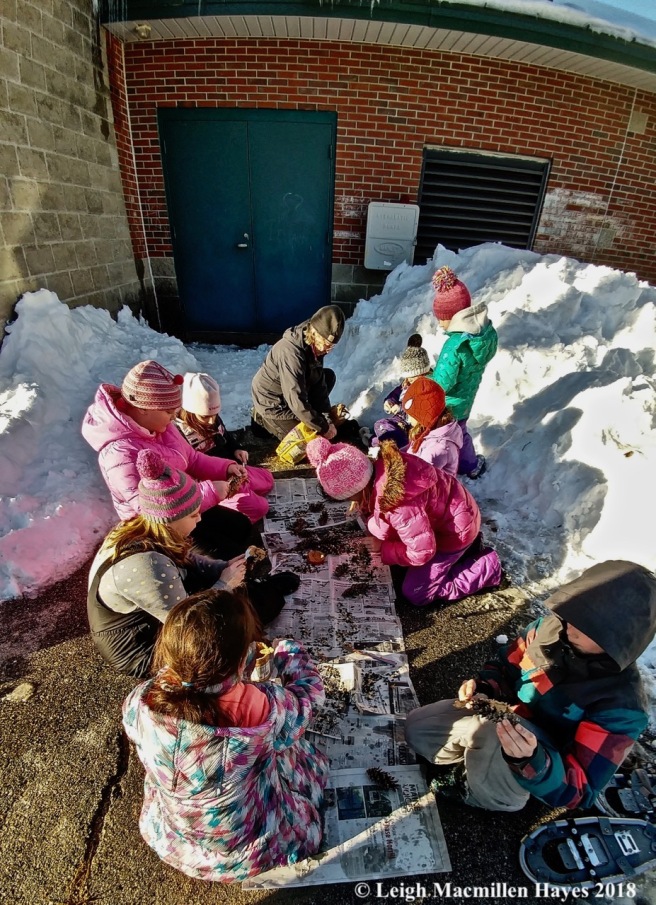 After saying goodbye to Joan and Alice, my outdoor experience continued, this time with an after-school nature program the Greater Lovell Land Trust offers to kids at the New Suncook School. Today, Kathy M. joined me and showed the kids how to create pinecone bird feeders using pinecones, peanut butter and bird seed. Both Meg, the Lovell Recreation Director, and I were excited because our group had swelled to nine. And the next time we meet, we believe we’ll have one more young naturalist join us, bringing our number to its limit. 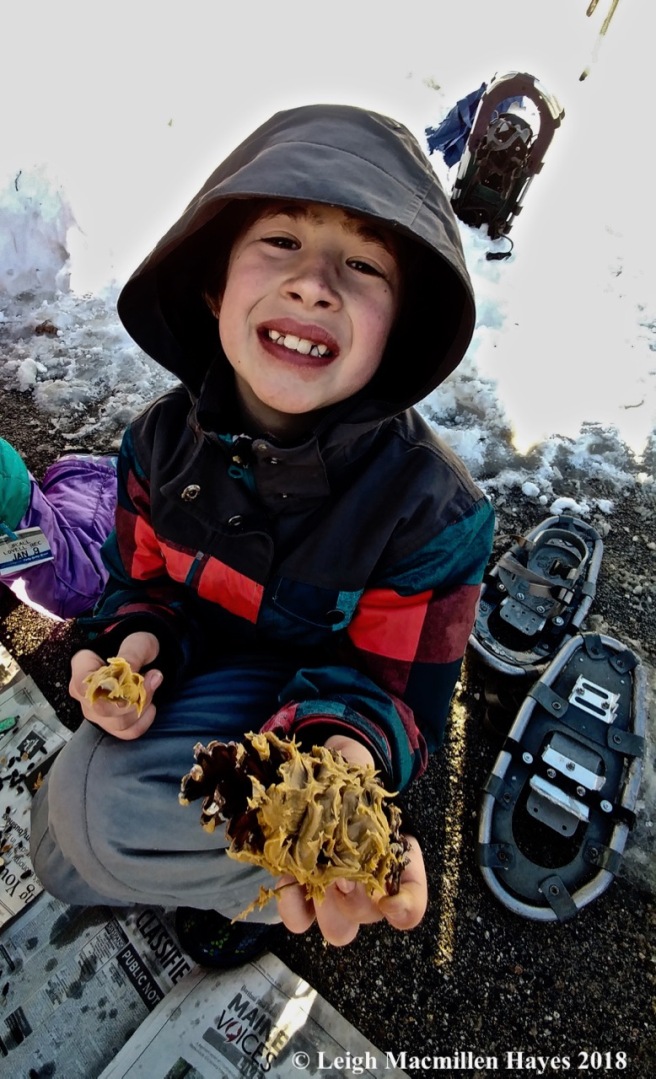 O. smiled as he showed off the peanut butter he’d slathered onto the cone.

And then we headed off into the sunset via snowshoes and skis.

And on a trail behind the school playground, fresh deer tracks made us happy. We showed the kids how to look at the heart-shape of the cloven toes and know that the bottom of the heart indicated the direction of travel. 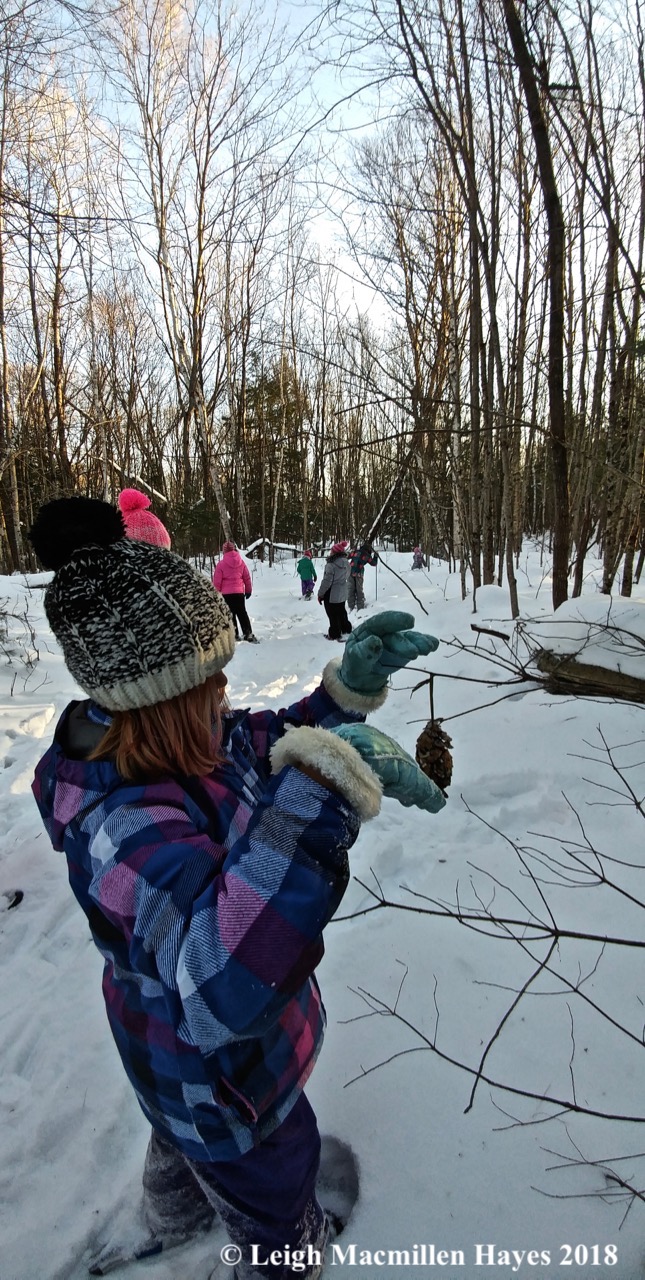 As we tramped along the trail examining tracks, we took time to hang the bird feeders. We’ll be curious to look at them when we meet again in two weeks. Today we wondered about who, besides birds, might visit them. Many bets were on deer and squirrels. 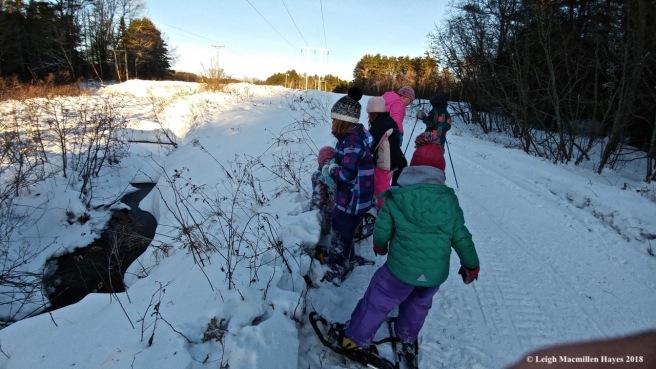 The trail behind the school leads out to the power line and snowmobile trail, where again, we found many deer tracks. 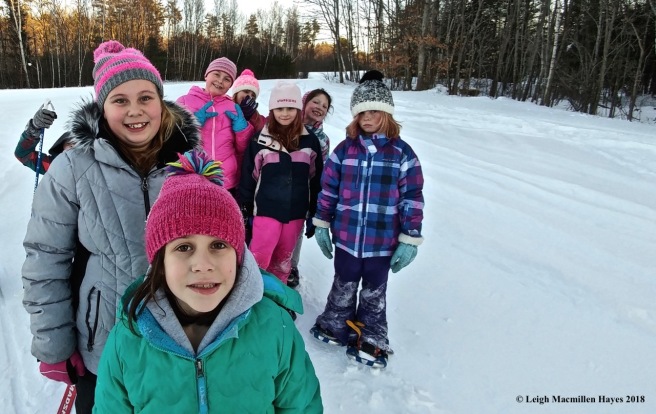 We’d gone a ways when we realized we needed to turn around and head back to school. But first, it was time for a group photo of happy campers.

With smiles from all levels.

Our after school group is called the Trailblazers. And K. took the time to illustrate what we’d done last week. Note the square with the tall person standing up and two smaller people on the ground with their snowshoes in the air. Last week, snowshoeing was a bit of a challenge for them, but this week they embraced the concept.

From beginning to end, my day was bookmarked by land trust trailblazers. How happy am I? Extremely. Perhaps the happiest camper of all.