After a few weeks of extreme cold, January did what it always seems to do–cranked up the thermometer. That might have been okay except that with the warm temps (40˚s and above) came the rain. And with the rain came the fog. And with both disappeared the snow. 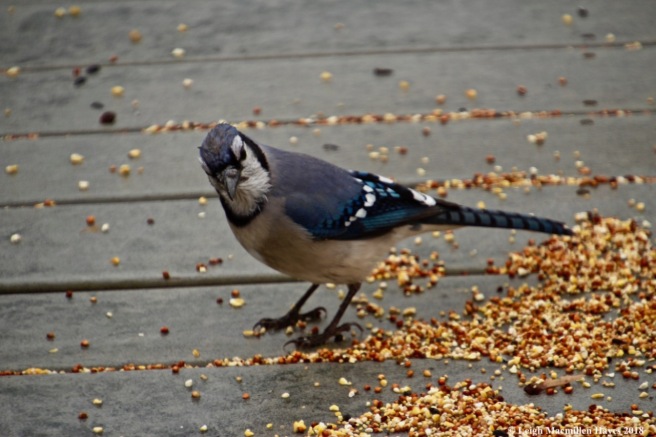 And so our deck was clear, except for the bird seed, of course. And a rather bedraggled bluejay. I’d noted in the past few days that all of the birds are much skinnier than I remembered, given that they didn’t need to puff out their feathers and insulate themselves from the cold. 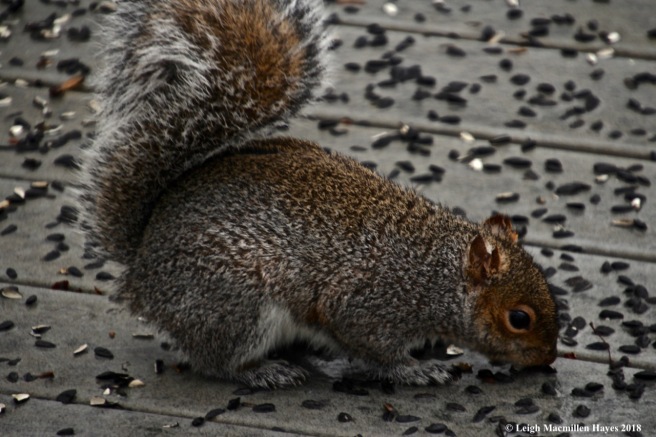 The gray squirrels also came by, their mouths like vacuums as they scoffed much of the sunflower seed supply.

They, too, offered a rather bedraggled appearance, but the rain didn’t stop them from getting their fill.

And then, the rain ended, clouds moved swiftly southward, arctic wind gained strength, temperature dropped dramatically, and sun shone brilliantly. Abruptly, the thaw ended. That was fine with me for I was afraid we’d lose all of our snow cover. As it was, we lost well over a foot in the past two days. And what’s left was riddled with natural debris.

I decided to check on the vernal pool, curious about its condition. As expected, it was still frozen, but with that yellowish brown ice of warmer days.

Nearby, I found open water in many places; some of it with thin ice designs decorating the edges.

and these three offerings were a few feet of each other. 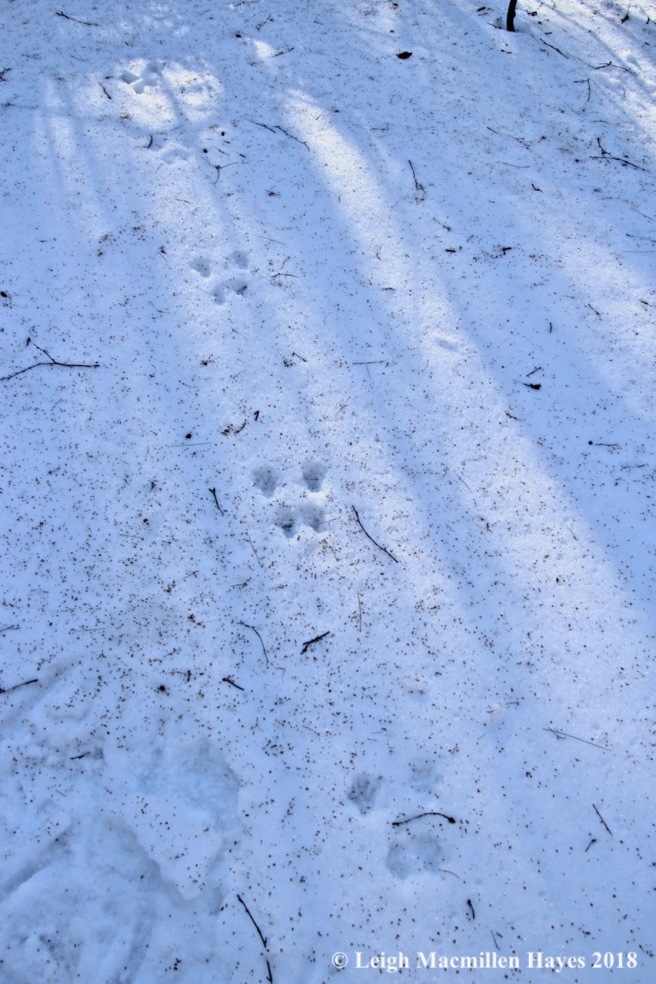 I discovered the ice as I followed red squirrel tracks created when the snow was a wee bit softer. By the time I moved across it had started to freeze again and though my snowshoes made a lot of noise and got a wee bit wet and frosty, I was thankful for them as they made my tramp easier.

The beauty of the squirrel prints was that their toes and toe nails showed. It’s a rare occasion when conditions are just right for good prints.

My next destination was to check on the creator of the tracks. And I felt as if a sun spirit was doing the same. Meanwhile, the squirrel chatted at us from a nearby tree.

The top of its pile had been exposed, but I suspected the cones hadn’t been touched. Instead, the snow had melted off of them. I think he’s saving this pile for another rainy day.

In the meantime, he has been busy as demonstrated by a midden slowly growing near another of his stashes.

I decide to let him feast in peace, and instead followed some turkey tracks to another location.

Along the way, it was the witches butter on an old pine stump that gave me pause. It’s also called orange jelly fungus and some say it looks like a brain. I wish I’d seen this small patch more recently, because I wondered if it had grown under the snow or if the melted snow and rain had affected it. Either way, it’s always a fun find and especially now as it adds a dash of color to our somewhat monochromatic landscape. 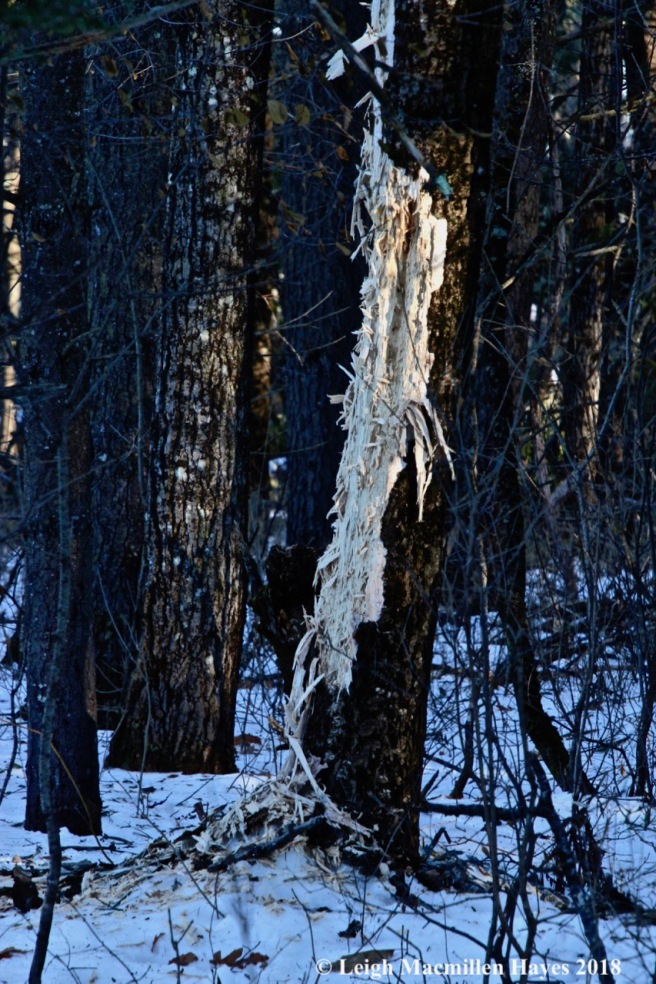 My next great find was a pileated tree. I last saw it a few weeks ago, but it seemed to me that even more chiseling had taken place.

At first, when I saw the gray wood above, I thought it might have been older work. 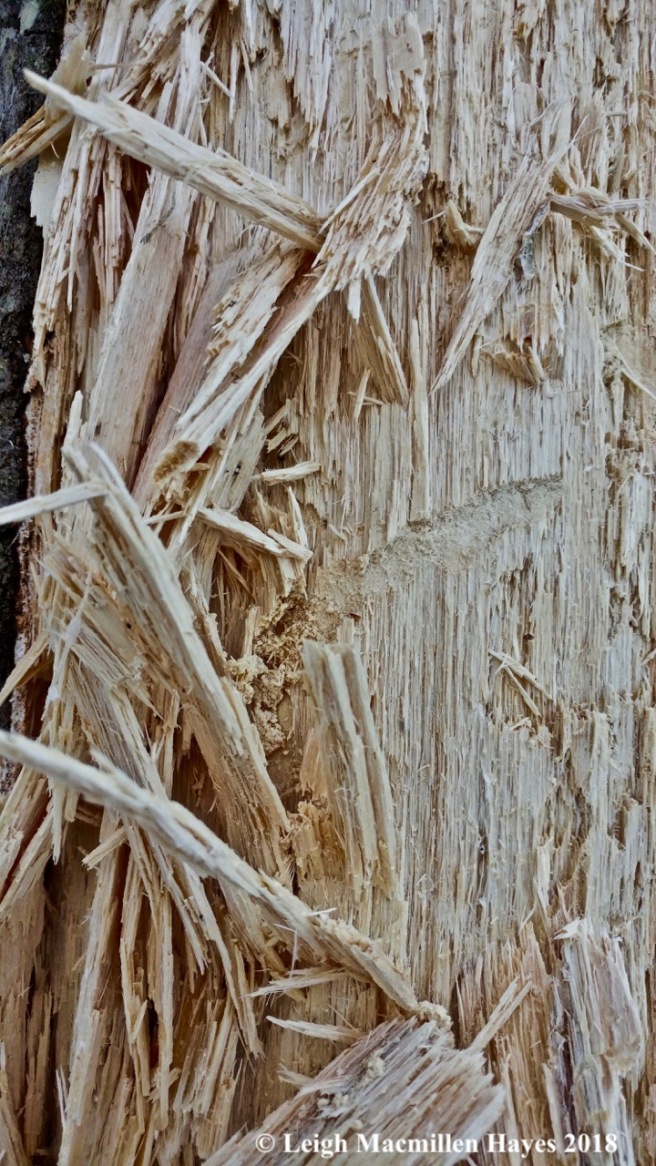 And that the newer work was much lighter in color. Do you see the chisel mark? Just imagine the head banging that went into this masterpiece. 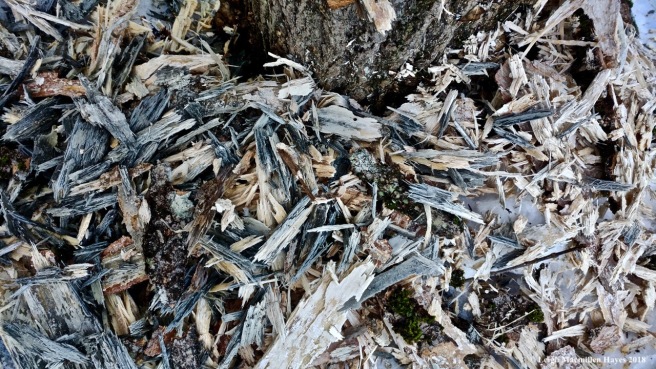 Like the squirrel, a growing pile below added to the story. For me, it was the realization that the gray wood was excavated at the same time as the lighter wood. My new theory, the gray wood had been caused by a fungus or rot of some sort and then the insects followed and finally the woodpecker. If you know otherwise, please enlighten me for I want to understand. Of course, I looked for scat, but came up empty handed. Drats.

At last I reached a second vernal pool, though the going was a wee bit difficult given the conditions. This one was more open than the first. 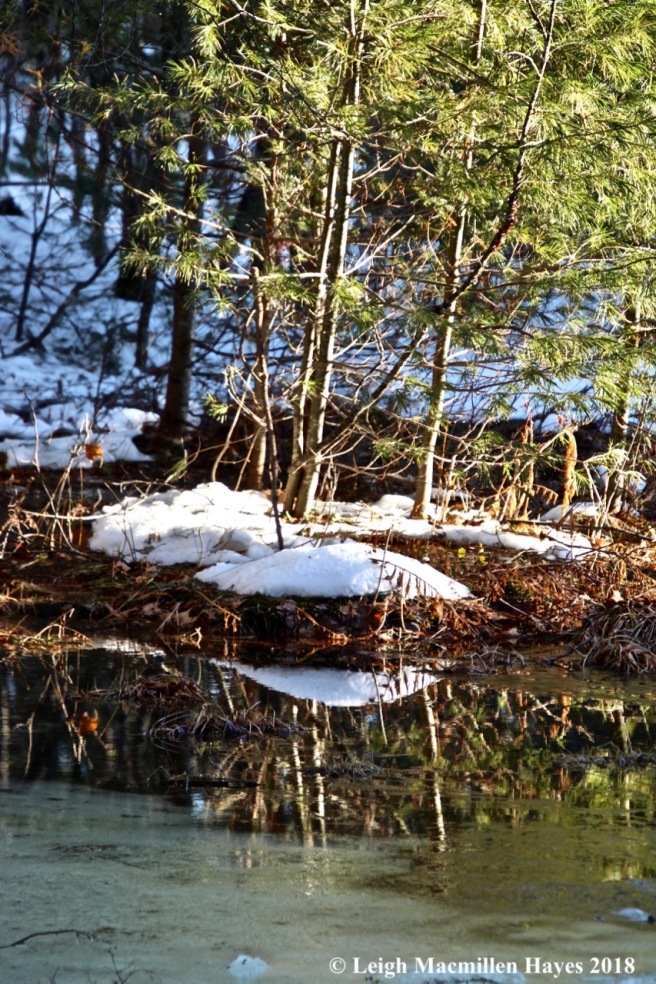 And on this winter day that began with the tail end of a heat wave, but had chilled significantly, a watery reflection was a fun treat.

On my way home, I made one more stop at the first vernal pool while the sun began to set behind it. I trust it will freeze up again, probably tonight.

What surprised me was how much had melted in the last two days. And from the looks of photos I’ve seen posted by others today, my neck of the woods shows only a wee bit of the January thaw.

We’ve had a melt down. Now it’s time for a freeze up.  Back into winter we shall go–thankfully.

2 thoughts on “Melt Down”