My world is always transformed during a snowstorm and even the day after. So it was that yesterday about four inches of the fluffy white stuff drifted down and created a wonderland effect. 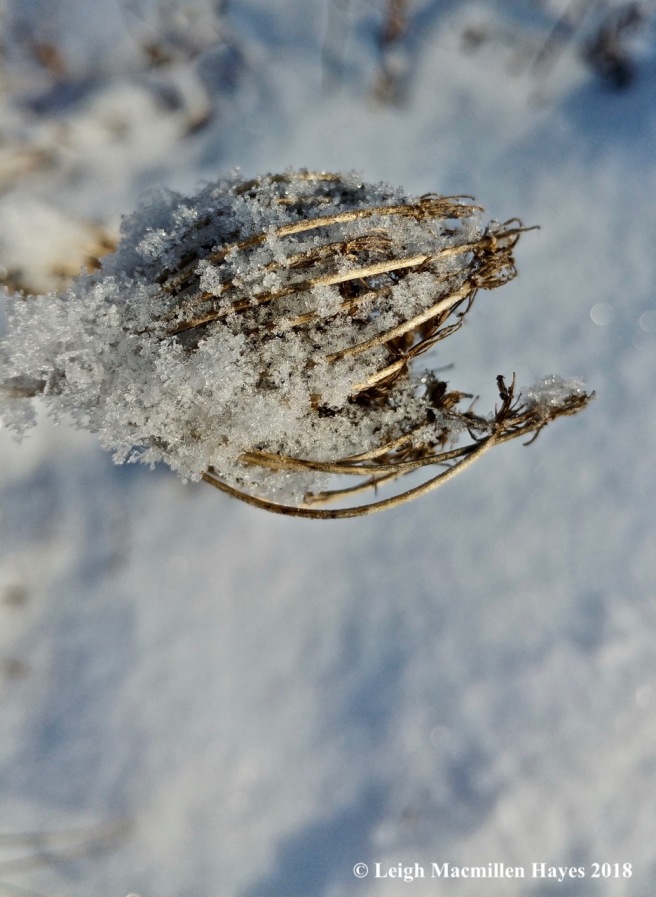 Even this morning, the individual snowflakes were still visible in their crystalized form (and I kicked myself for not packing my macro lens.)

I began the day with a slow journey from home to Pondicherry Park, with the intention of meeting a hiking group. Along the way, I realized that others had trekked before me. Two red foxes and a coyote had crossed paths, forming an X that mimicked the X pattern in their individual footprints. (The bigger prints from upper left to lower right being the coyote; and the smaller prints from lower left to upper right being the two foxes.) 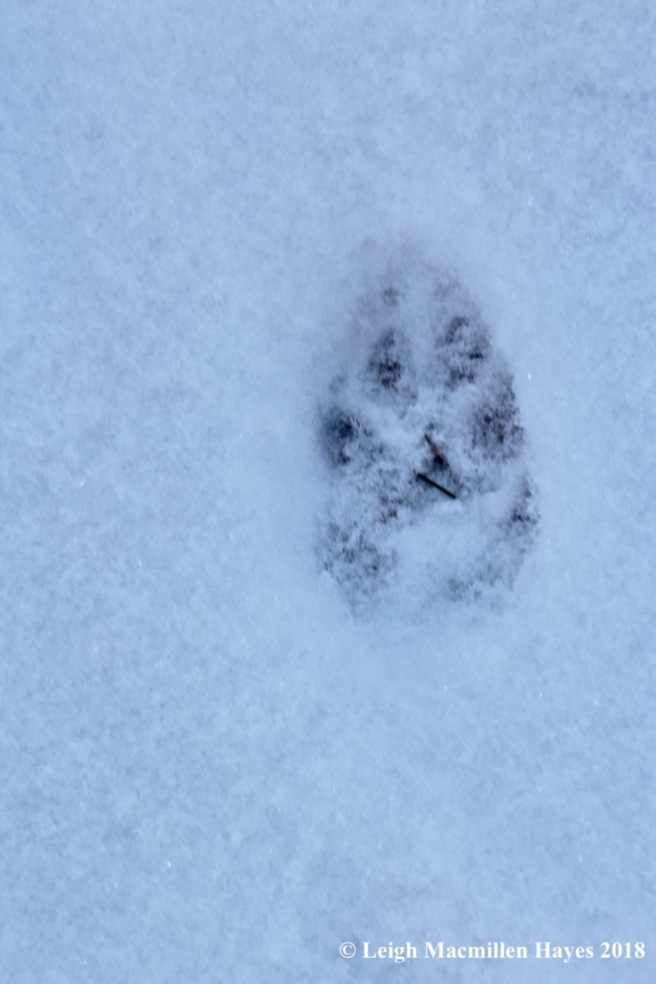 In almost direct registration, a hind foot of the fox landed on snow previously packed down by the front foot, so what you see are the two prints. The top print was a bit fuzzy in formation for so much is the hair on the fox’s foot. Despite that, toe nails, toes and the chevron pad at the back, plus the X formation between toes and pad seemed obvious. 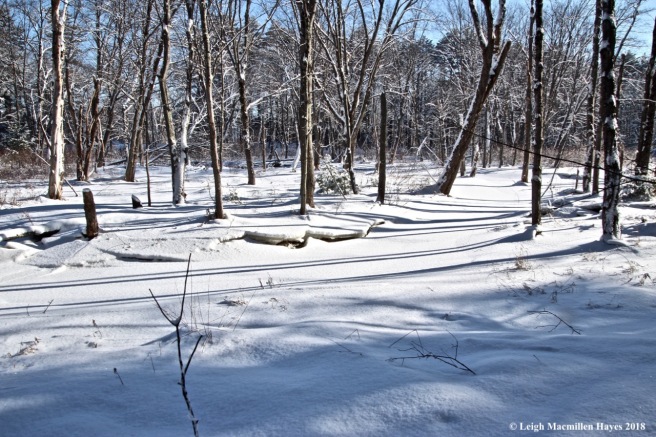 As I made my way through the park, the morning light on Stevens Brook drew me off trail to the frozen edge. And ice along the bank indicated the change in water levels since the heavy rain of a few days ago.

At last I reached the gateway to town, which is also the gateway to the park–the Bob Dunning Memorial Bridge. I have a great fondness for this bridge on many levels, including memories of Bob who passed away suddenly at least ten years ago, the barn-raising community effort to build it, and the fact that each beam represents a different tree, bark included. You can learn more about it by reading my previous blog post: Barking Up A Bridge.

And each time I walk across it, it seems to offer up something different. This morning, it was how the snow coated the railing. I think the artistic side of Bob would have approved.

On the other side, I met up with a group of seven women. Led by AMC volunteer JoAnne Diller, our intention was to tramp through the park following all the outer loops, including a link on the Lake Environmental Association‘s Pinehaven Trail at the Maine Lake Science Center. Along the way we visited with each other, enjoyed the beauty that surrounded us, and got some exercise.

And then we returned to the bridge and parted ways. I choose to follow the inner trails home, pausing first to enjoy the color of Stevens Brook from the bridge’s center.

And no winter visit to the park is complete without taking time to watch the ducks–and listen as well. 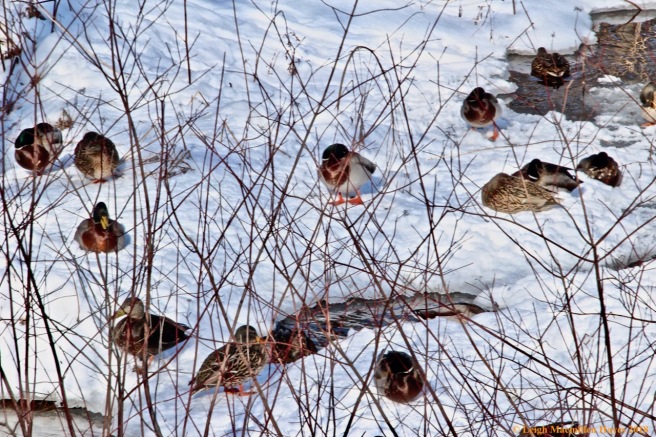 They gather by the dozens, some to rest while others seemed to be in constant motion.

Before following the trails leading west and toward home, I returned to the scenic overlook where ice skirted a tree–again indicating that the water was recently much higher. 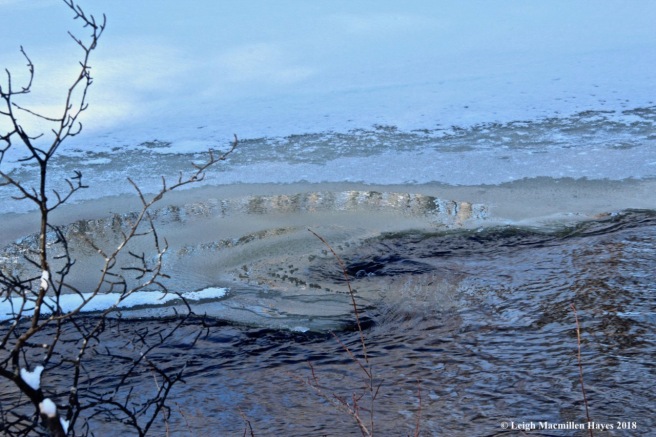 In the same spot I watched water swirl in a small eddy and am amazed that I’m not still standing there–mesmerized as I was by the action.

But my stomach was growling and so I continued on–stopping to admire another of nature’s wonders–a yellow birch that germinated atop an old pine stump and today stands as a sculpture of one member of the community supporting another despite their differences. Hmmmm.

The trail I followed home was less traveled than the others and the snow a bit deeper because it hadn’t been packed down. When the park was first created by Lakes Environmental Association and  Loon Echo Land Trust, the AMC did some trail work and part of their offering was this bench. Though it hasn’t recently supported a weary traveler or one who just wants to set for a time, I trusted that day will soon come again.

I crossed the bridge near the bench, which was also built by the AMC crew. And from there, I headed home to lunch, but not without offering a smile of gratitude to JoAnne for continuing to volunteer to lead walks for the AMC and giving us all an excuse to enjoy the company of each other in this beautiful place. 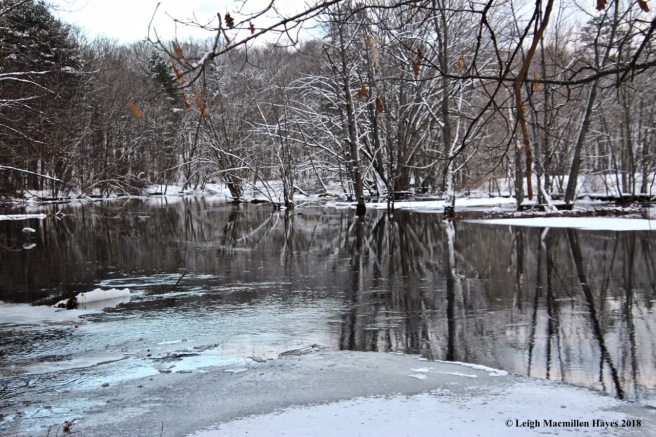 Later in the day I found myself in Lovell for a quick errand and the light was such that I felt the need to spend a little time beside the Old Course of the Saco River just down the road in North Fryeburg.

The scene is never the same, nor is the light. What may have seemed monochromatic was hardly that. 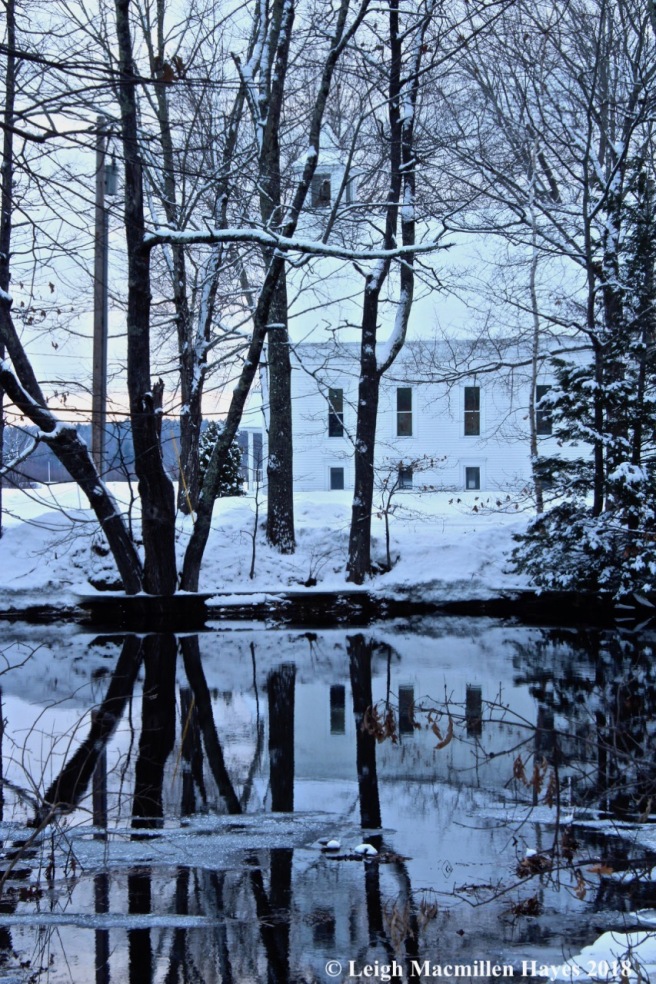 As the sun began to set, the water still harbored reflective moments.

And it transformed some reflections from crisp representations into impressionistic paintings.

At the end of the day, however, my favorite reflection of all was one spied along Willet Brook in Pondicherry Park by Eleanor, a member of our morning AMC trek.