After church we had exactly five hours to pack our lunches, drive to the trailhead and complete our trek. After all, the New England Patriot’s were scheduled to play the Jacksonville Jaguars in the AFC Championship game at 3pm and we intended to be in the audience–from the comfort of our couch, of course.

By 10:30, we’d pulled into the Ledges Trail parking lot on Mountain Road in Denmark (Denmark, Maine, that is) and began the one and a half mile walk back down the road. Our intended route along the trails of Pleasant Mountain in Loon Echo’s preserve was to climb up the Bald Peak Trail to the fire tower at the summit and then follow the Ledges Trail down. We love hiking a circular route, and like to get the road walk out of the way first.

We had no idea what trail conditions would be like, but decided on micro-spikes, which proved to be the best choice. Beside the trail, the mountain stream was layered thick with icy sculptures.

Everywhere we looked, the water had frozen into a variety of formations.

Less than a half mile up, we came to the sign for Needle’s Eye.

“It’s up to you,” he replied for he knows my love/hate relationship with the spur path to the geological feature. 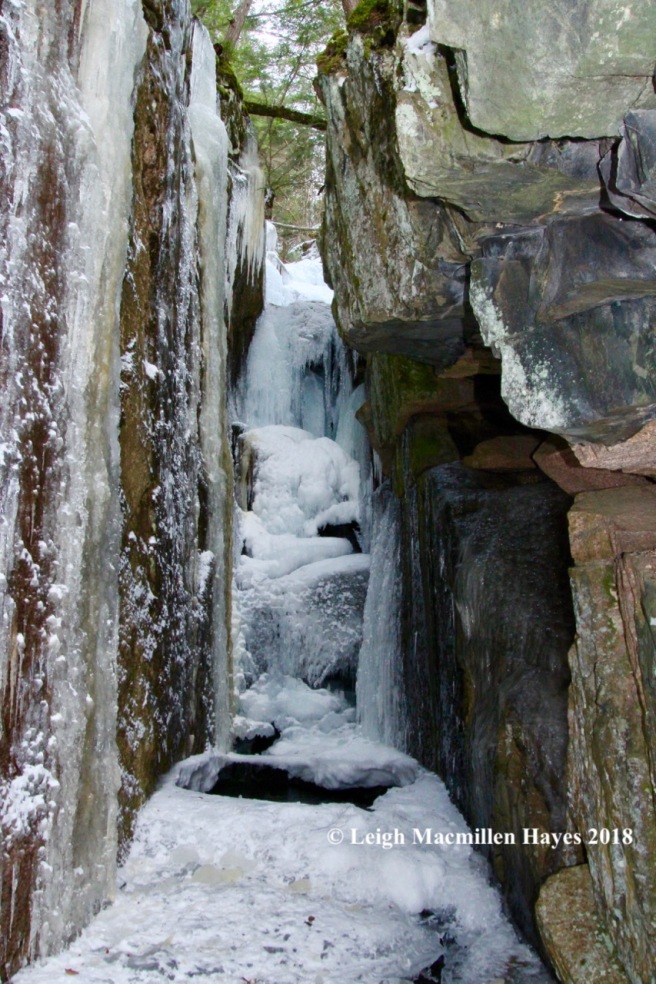 Somehow, we made it to the chasm in only a few minutes. And then we stood in awe, rejoicing that we’d made the effort for we were well rewarded.

At the back of the eye, the waterfall stood still for a moment. Eventually, we made our way back to the main trail, and I’m proud to say I only exclaimed once when a tree that I grabbed wiggled. I thought of my friend, Marita, and her patience with me last spring when my brain didn’t want me to venture forth along the spur.

We were rewarded again, however, when we did pass by the intersection and continued on to the summit of Big Bald Peak. It’s always a spot to stop and look back at Moose Pond below where we could see our camp and Sabatis Island.

It was just beyond that stop that we found lunch rock. Our view to the northwest was a bit obscured by the pines, but they helped block the breeze, so we didn’t mind.

And to the southwest, the ridgeline we intended to walk. We could even see the fire warden’s tower at the main summit.

After lunch, across the ridge we trekked, enjoying the sights along the way. 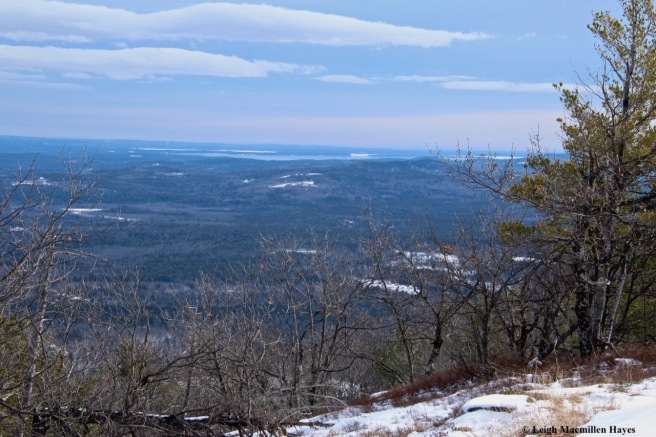 In the distance, we could see Sebago Lake and noted its open water which evoked a conversation about global warming. Many thought this would be the year it finally froze over again, but . . . not to be.

Because trail conditions on the ridge were favorable, we moved quickly–practically running through the blueberry fields that will call my guy’s name come July.

In what seemed like no time, we turned left onto the Fire Warden’s Trail and then made our way up to the iconic tower that was built in 1920. My hope is that it will still stand stalwart in 2020 and celebrate its one hundredth birthday. 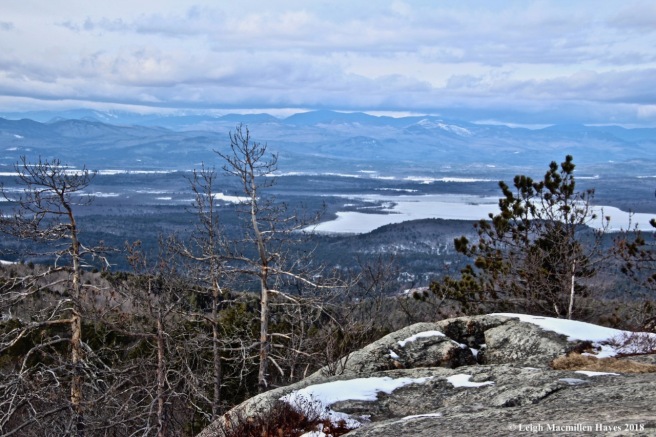 Sometimes the summit view includes Mount Washington, but today the summits of the Presidentials were hidden in clouds.

One scene that didn’t make us happy was that of the red pines. About five years ago I noted their decline and communicated with a forester who was studying red pine scale. Since then, most of the trees have been infested by the tiny insect and died.

A much prettier picture we saw as we began our descent down the Ledges Trail, where the sky displayed a rainbow of colors above the Southwest summit of the mountain. 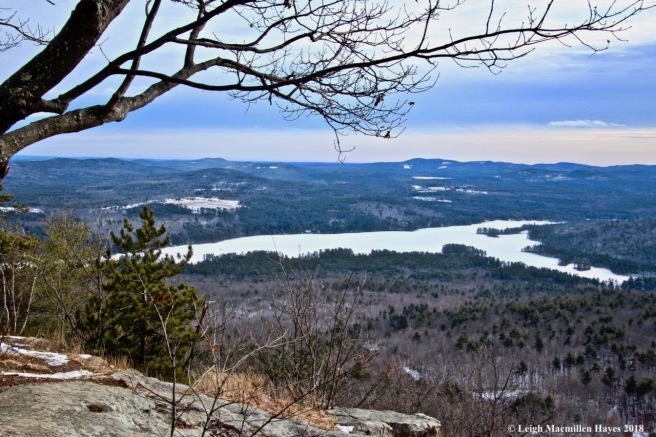 As we made our way down, we paused as we always do along the ledges for which the trail was named. The south basin of Moose Pond dominated the vantage point.

Along the entire route, we only met a few other hiking parties, but one apparently enjoyed the journey as much as we did and left smiles for our hearts.

We arrived home with ten minutes to spare until kickoff.

Before the game began, we both agreed that our favorite point of view for this Sunday  was Needle’s Eye.

6 thoughts on “Sunday’s Point of View”