A couple of us were honored this morning to share the trail with ten homeschooled kids ranging in age from about four to teenagers. There was even a babe in his mom’s arms, but he choose to sleep through most of our journey as we looked for tracks at Western Foothills Land Trust’s Shepard’s Farm Preserve.

I was wowed by these kids for their knowledge about the natural world was impressive. It was obvious that they’ve spent a lot of time outside not only due to all they had observed and the stories they told me, but also because it was quite cold and they never complained.

Through a mixed forest and into the bog we searched for and followed tracks–of mice and deer.

We so wanted to see those left behind by a predator and thought for sure we would since the deer tracks were plentiful, but today that wasn’t meant to be. We did find where the deer had browsed, peed, scatted and slept.

The kids’ curiosity was for more than just tracks and so we stood in awe of a pileated woodpecker tree.

And a hornet’s nest.

The nest was flying high–on the underwing of a bird sculpture–reminiscent of a certain Tesla Roadster on a rocket.

After showing them some plaster casts of prints and my scat collection back in the parking lot, we said our goodbyes and I drove on to meet my friend, Jinny Mae.

Not long into our time together, we squealed with delight when we thought we’d made a new discovery. We found squirrel tracks that started about ten feet from any tree and as we looked at the overall pattern we noticed that there were arced lines between the sets of prints that appeared different from the lines behind the sets that we typically encounter. Our brains and hearts worked in unison and we determined that we’d found a trail left behind by a flying squirrel. It was a first for both of us. But . . . as we continued on we began to question our conclusion and we switched back to red squirrel. I don’t know. What I do know is that it was a squirrel. And maybe that’s enough.

We made our way to a beaver pond, again hopeful for interesting tracks, but our best finds were squirrel and mice. Oh, and a domestic dog and its skiing partner.

We did spy a lodge that we thought might be active, but didn’t risk the journey to check on it for we found ourselves sinking deeper than our comfort zone.

As we made our way off of the pond, a steeple bush came to our attention–its erect structure gone awry. Uh oh. Had it done something wrong?

And then we heard a pileated woodpecker that we finally spied on a distant tree. Though we both have the good fortune to see them often, we were still thrilled and amazed at its size.

Our next stop was beside the brook that flows out of the pond. I was with Jinny Mae so it was no surprise that we stood for a long time, listening and admiring. 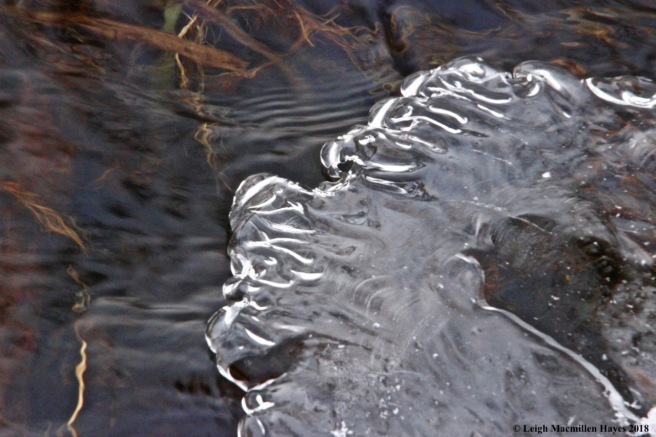 Ice and water always fill us with wonder . . .

Shadows and textures do as well.

And not to be left out, lungwort.

The tracking wasn’t so great, but at the end of the day we’d all delighted in the discoveries and questions and understandings and connections we’d made. And the fun we’d had in doing so. 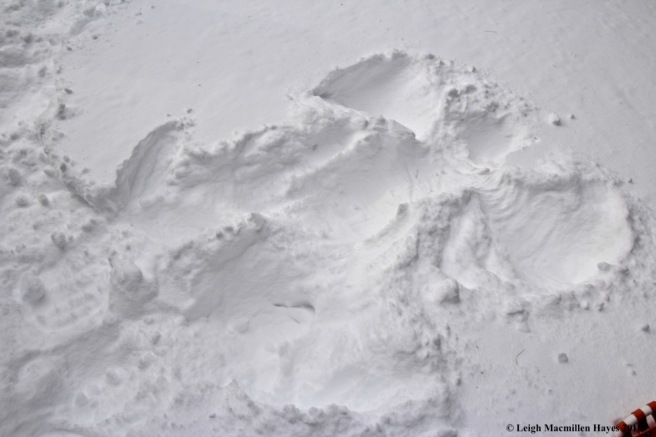 When life gives you snow–make your own impressions.

2 thoughts on “Make Your Own Impressions”