I’m sure when we said our wedding vows back in 1990, there was something in there about only riding a snowmobile once. And I did that once two years or so ago–mostly because I knew it would please my guy. Certain memories remain from that experience: I felt like a bobblehead inside the helmet; I lacked control as I sat behind him and couldn’t see; when I did peek around, I was sure my head was going to strike a tree so narrow was the trail; and I didn’t like the speed. Oh yeah, and at a road crossing, I do believe I jumped off and walked to the other side. With all of that in mind, I’m not sure what I was thinking when I created a Valentine’s gift for him–our very own Amazing Race. My rationale was that we enjoy the show, but know that while there are certain stunts one or both of us could handle with ease, there are others that would certainly cause us to be last to the mat–and lose. So, why not create an Amazing Race that we have a 99.9% chance of winning. If we lose, we’re in big trouble. All that being said, our race includes twelve events, one for each month. And this month’s activity meant a snowmobile ride for two. Oy vey. I created this so I could only blame me. 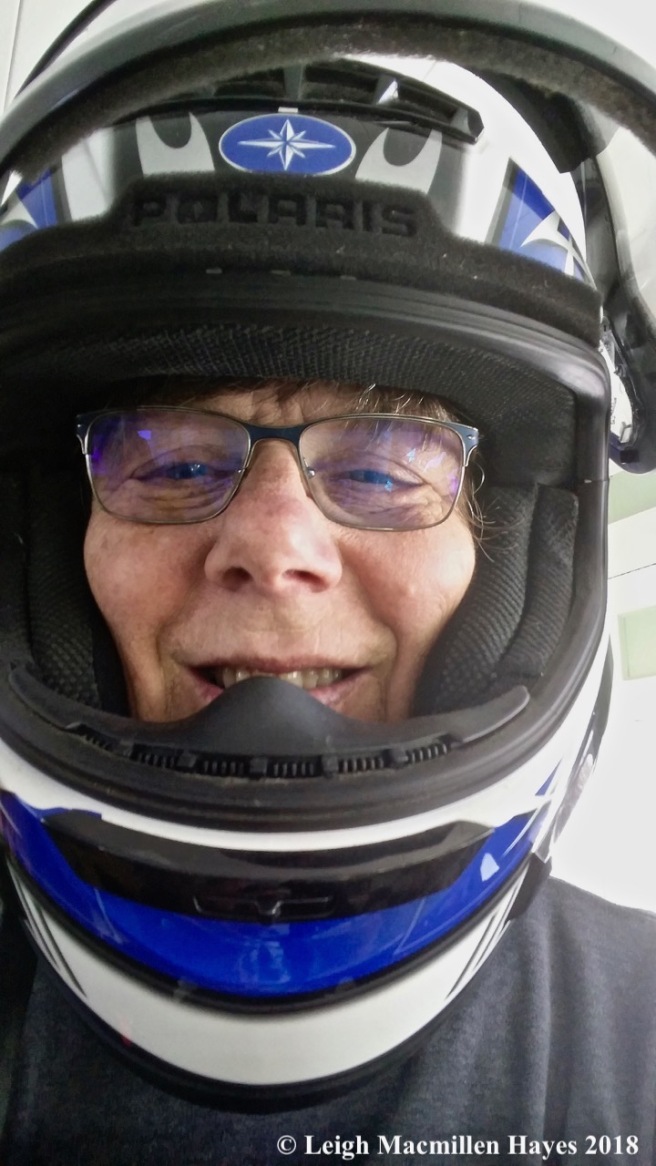 We awoke to five inches of snow this morning and knew that today was the day. After an early lunch, I tried to delay the inevitable. The dishes needed to be washed. And dried (I never dry the dishes). Toilet cleaned. I even thought about vacuuming, but my guy stopped me. And presented me with a black helmet. It was much too big and kept shifting around. He gave me a second helmet to try on. I felt claustrophobic and couldn’t take it off fast enough. “We have another,” he said as he headed to the barn. Darn. And the third one fit just right. Double darn. 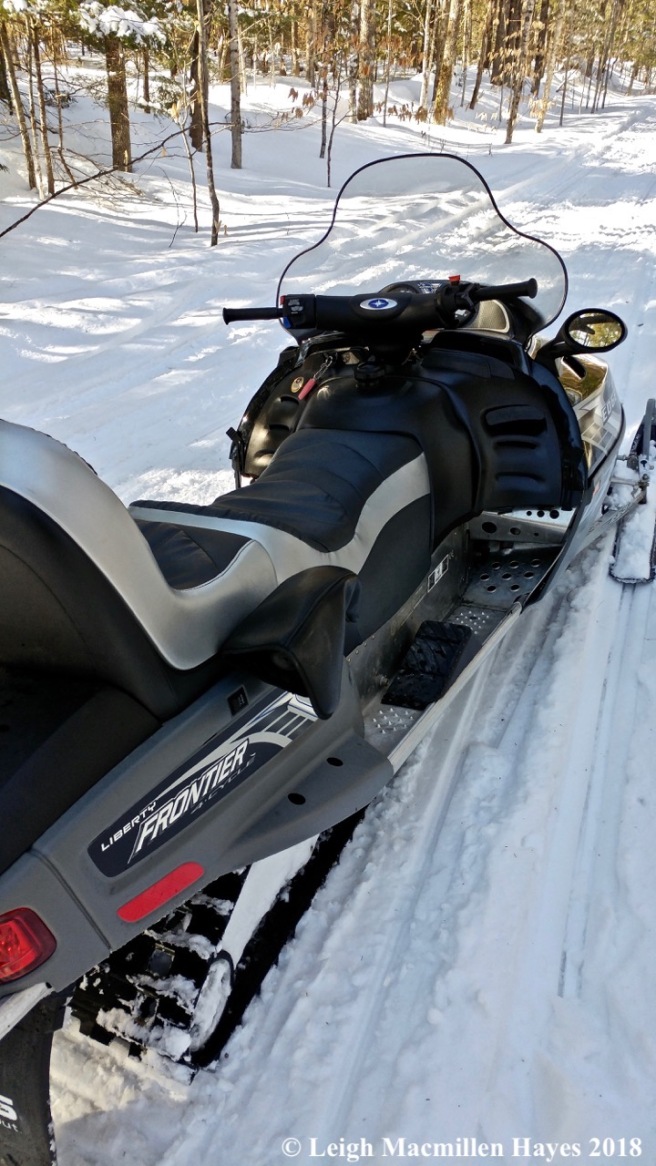 Our mode of transportation was ready and waiting. No long lines of others vying for a seat. No being put off until a later time. Our race had begun. 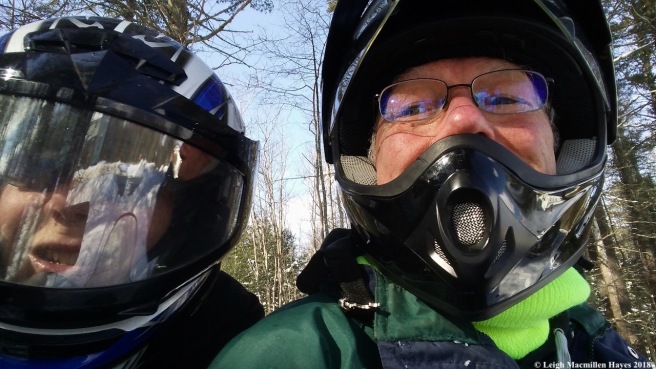 We hopped aboard and headed off down the trail. At first it was sort of okay and I almost relaxed, until that is, we took a sharp corner and I clenched my hand rails while leaning away. Sometimes, I felt like I was a kid again in the back of the school bus and jumping up and down as we went over the bumps on Valley Road in my hometown.

I was glad my guy couldn’t hear me unless I leaned close and spoke up–I kept my own running commentary for the first twenty minutes, which occasionally included an expletive not worth repeating. 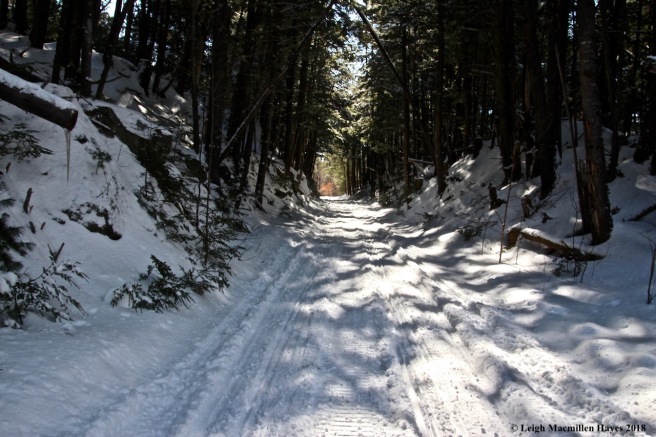 At last we reached the Narrow Gauge trail, where my guy picked up the speed, but given it’s a fairly flat old railbed, I chose not to complain. And as good as his word, he stopped whenever I asked. One of my favorite spots along the trail is what we refer to as the tunnel, for in that section only, the walls are high on both sides and hemlock trees tower over. 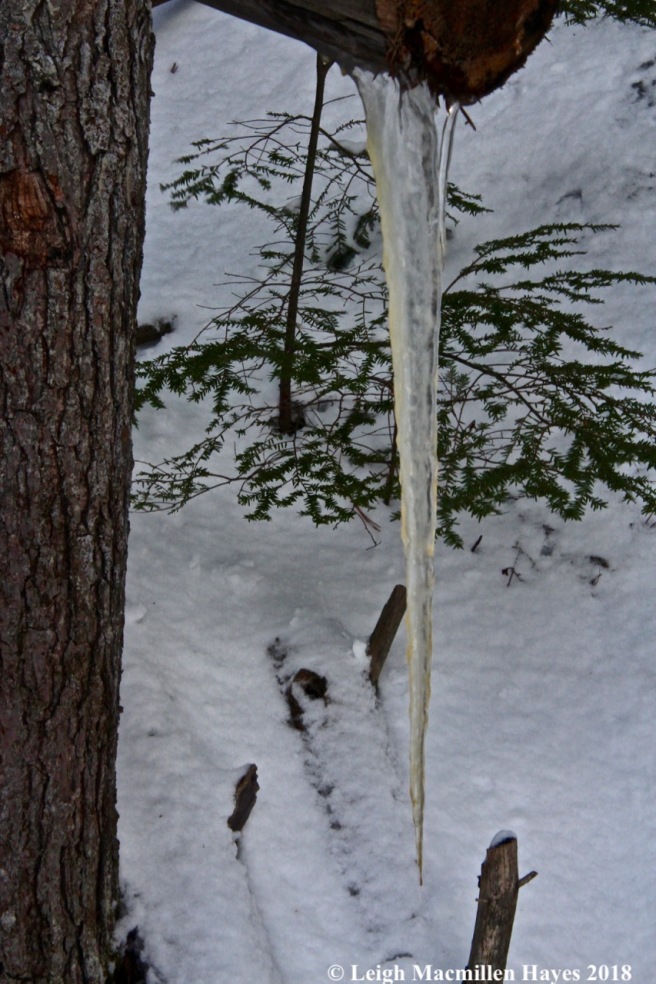 One of the things about riding on the machine is that you don’t get to really see anything. He loves it because it takes him places he wouldn’t ordinarily go. Yeah, there’s that. But . . . I prefer a slo-mo approach. And so today, we melded our ways–full speed ahead (although he thinks he took it slow) and complete stops every once in a while to take a look at things like sap forming an icicle, 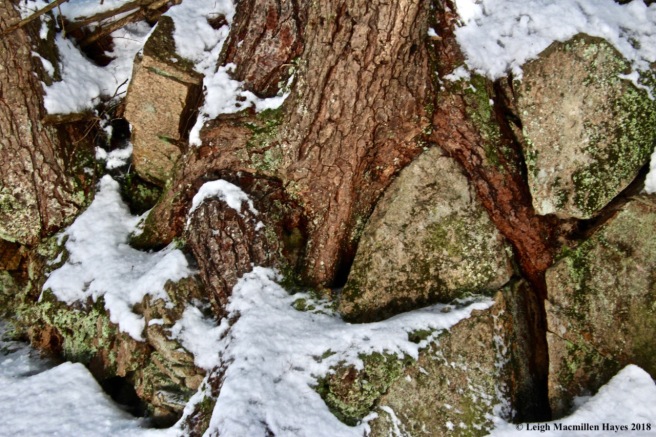 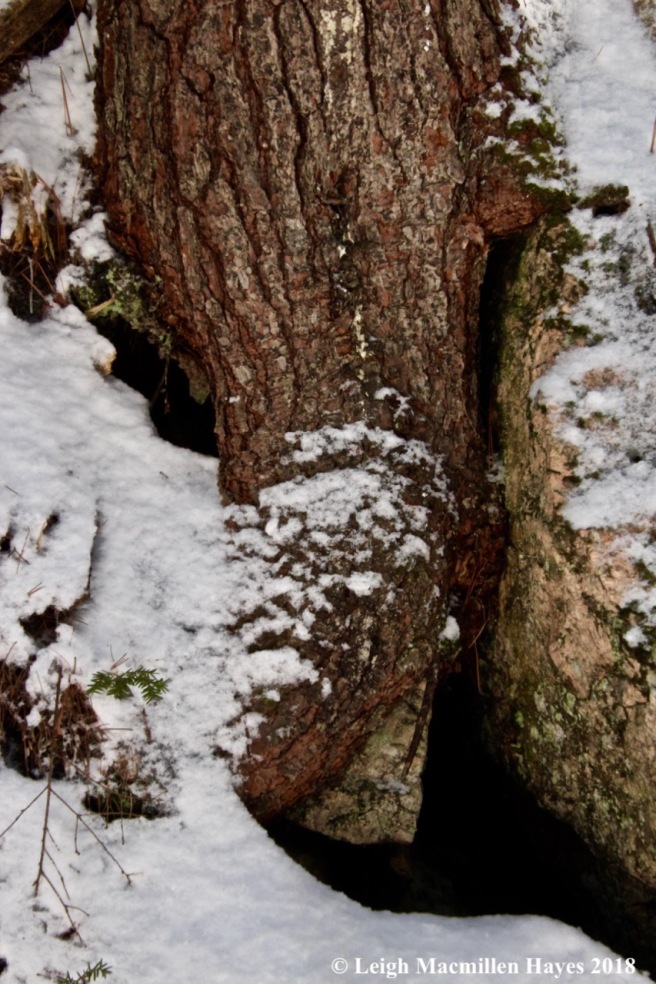 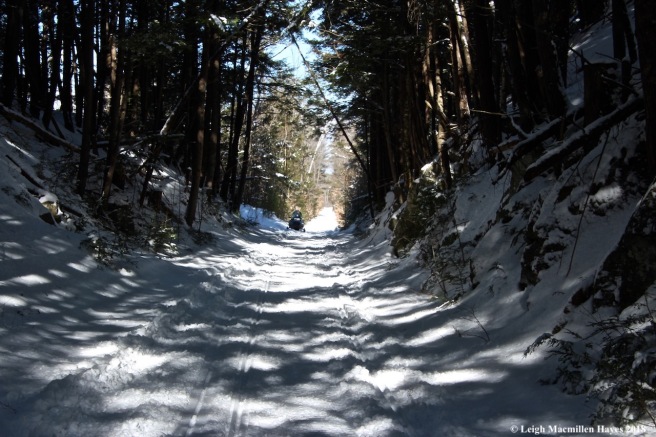 At last I walked back to him and we continued on our way. We were only going to go the length of the Narrow Gauge, but I was surviving and my guy smiling. 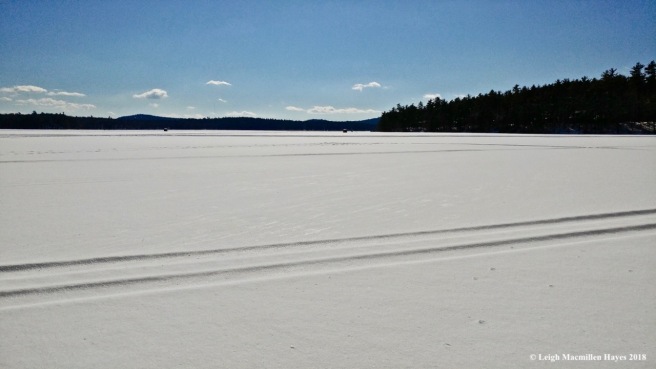 Our next destination–Hancock Pond in Denmark. 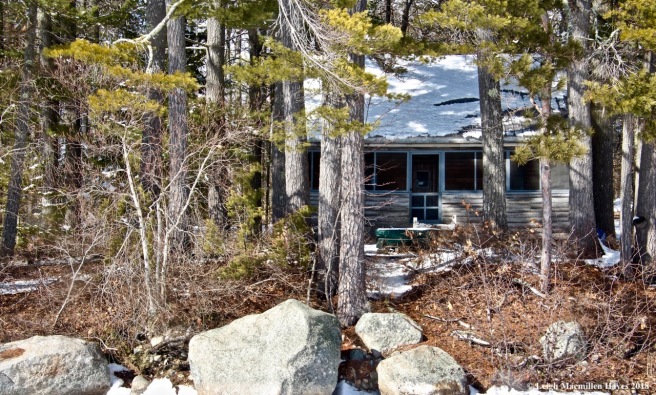 I asked him to stop by this camp intentionally, for I wanted to show its owners, Faith and Ben, the midwinter view–and lack of snow mainly because of its orientation to the sun. 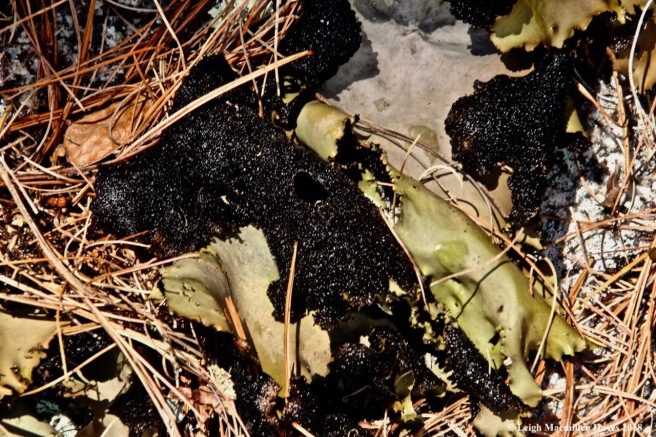 Despite the fact that most of last night’s snow had already melted, rock tripe along their shoreline had turned green–photosynthesis in action. 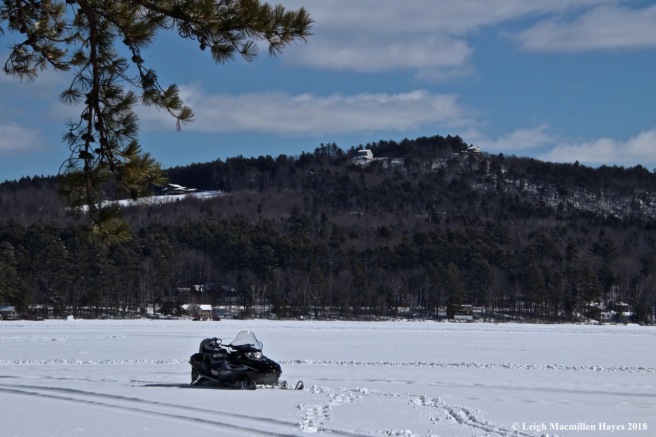 As we walked back to the chariot, we noted the houses on top of Bear Trap. My guy suggested that we turn around and head in that direction next. From the start, I suspected our plan of an out and back trip wouldn’t occur for he loves to return via a different route, while I don’t mind following the same path back because I usually see something I missed previously. But . . . I agreed with him. 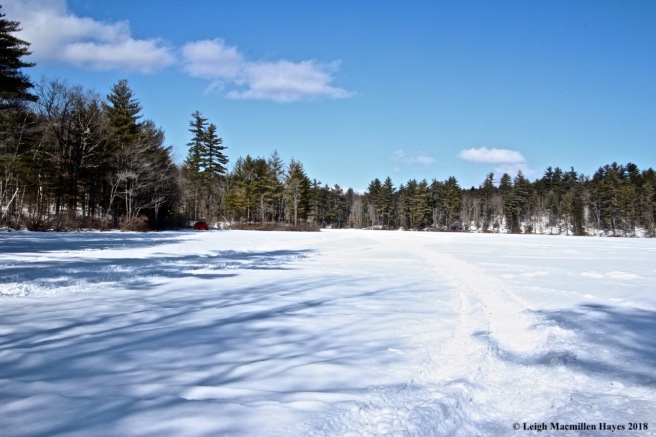 We did have to travel a wee bit back on the Narrow Gauge to reach the turn toward Narramissic, located just below Bear Trap. Since we were passing by for a second time, I asked to stop at Perley Pond for a quick look. 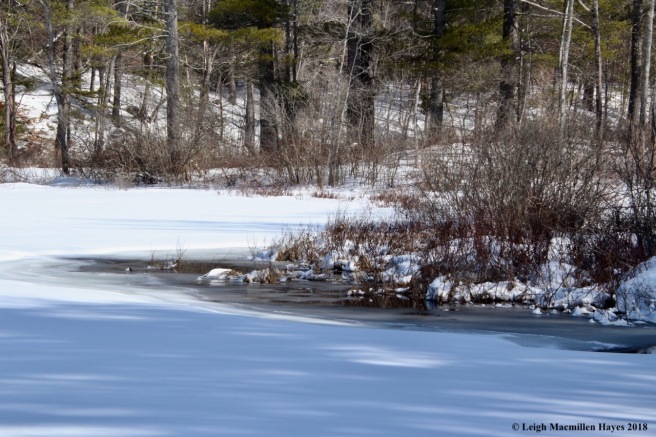 Around the edges, the melt down was beginning. 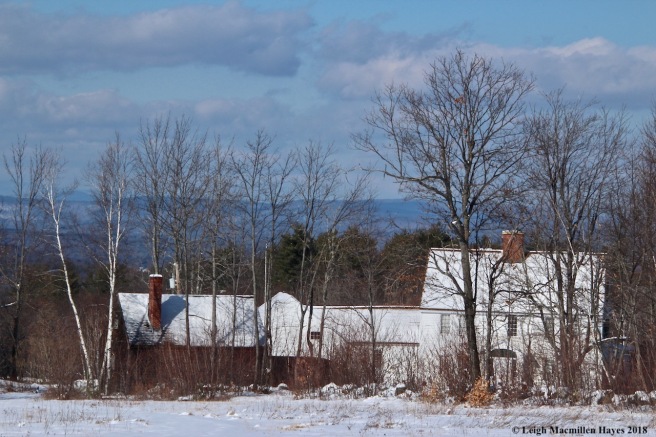 And then onward and upward we rode to Narramissic, the Peabody-Fitch Homestead erected in 1797 by William Peabody, one of Bridgton’s first settlers. Today, the property is owned and managed by the Bridgton Historical Society. 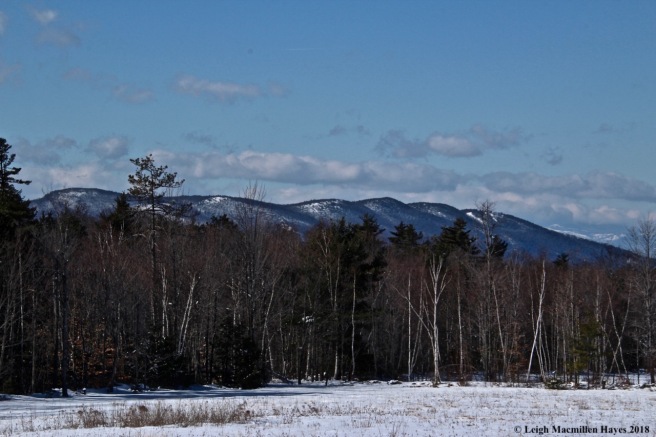 Our main mountain wasn’t part of today’s journey, but the view of the ridgeline was spectacular from the farm’s field. 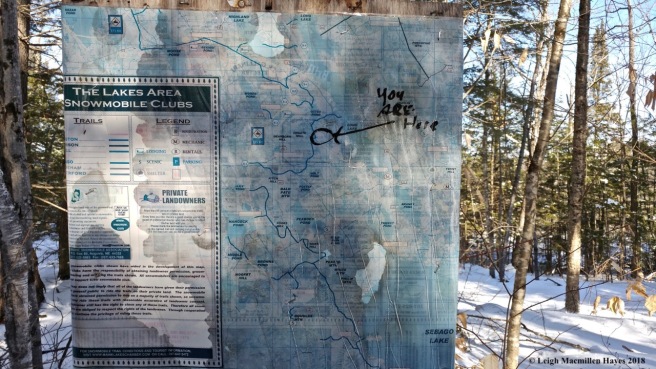 From there, we passed by the spur to the bear trap, and continued on toward Holt Pond. For a while, I felt lost in a daze as we flew through woods in varying degrees of succession due to logging events over the years. I tried to look for bear trees for I knew there should be some, but didn’t spy any. And hardly recognized our place when we suddenly arrived at the emerald field near Holt Pond. 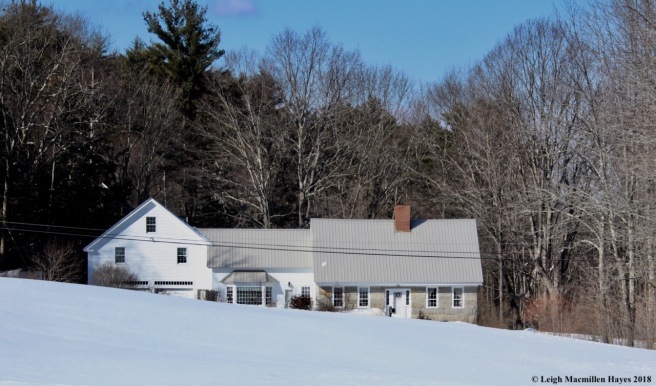 I also completely missed the quarry from which the Stonehouse was built. The house had an interesting history. In the early 1800s, John Mead built a primitive house in South Bridgton. Like the big bad wolf of fairy tales, wind huffed and puffed and blew the house down. Mr Mead was quoted as saying, “I can and will build a house that will stand the winds and weather.” And so he did–using the plug and feather method to cut the stone from the nearby quarry and transporting it a half mile via a stone boat or sledge. The stone treasure rose from the hillside, where Mead had situated it out of the wind. The field was certainly windy and we didn’t pause for long. 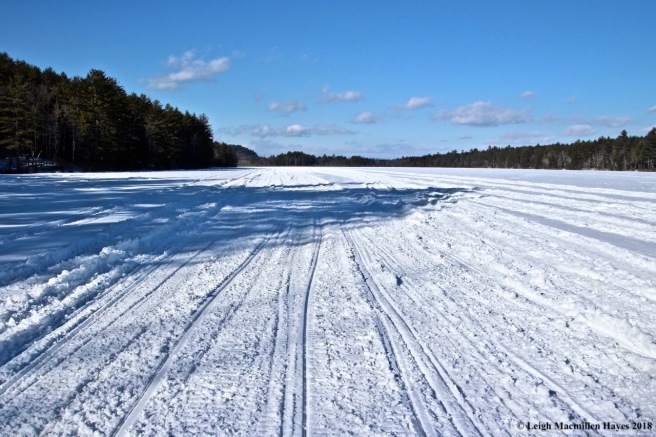 Our next stop was to a place I’d never visited before and I was impressed by its size–Otter Pond. Today, I felt like we were the otters as we slid across the snow-covered ice. 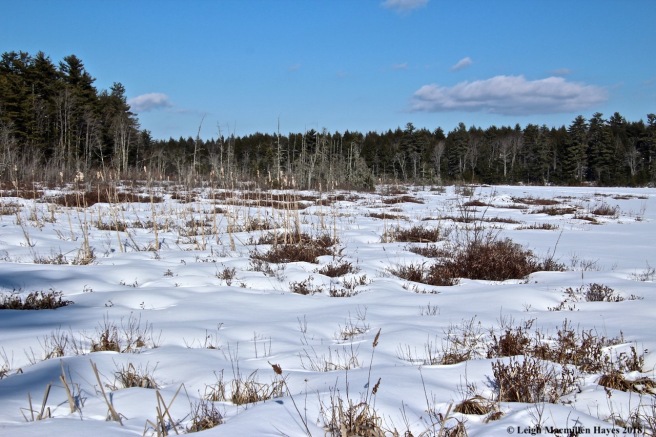 At the far edge, I found a spot I hope to return to for it looked like an interesting wetland.

For today, the cattails, their seeds blowing in the breeze, were enough to whet my appetite. 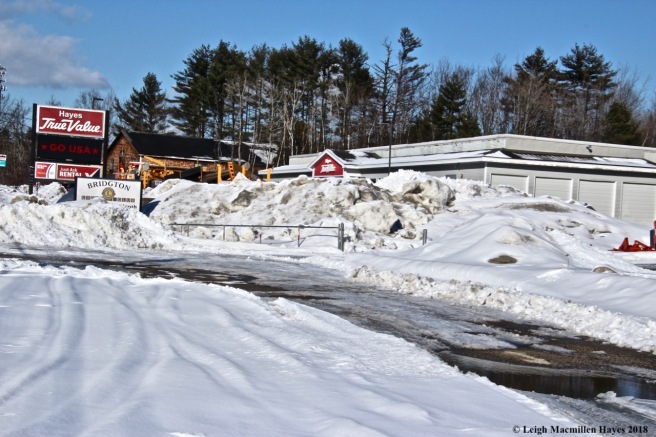 And then in a few more zigs and zags, we found ourselves in familiar territory as we passed by my guy’s store. 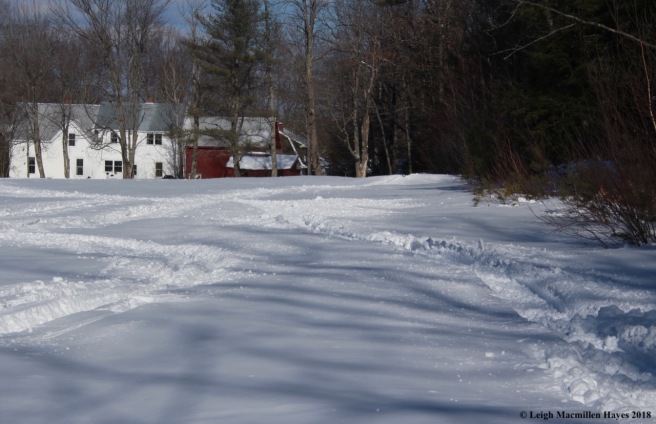 Two more road crossings and a few more bends in the trail–and finally the mat welcomed us home after a successful finish to the first leg of The Amazing Race–our style.

4 thoughts on “The Amazing Race–Our Style”