Fresh snow. Blue-bird sky. Mid-range temperature. Day off. All the makings for a fine Monday date with my guy. 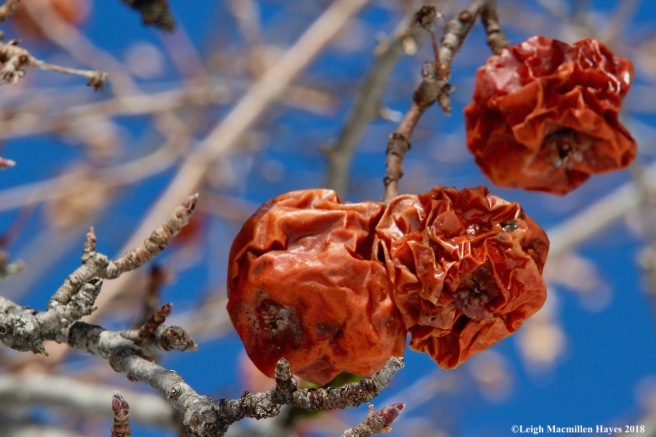 We weren’t sure if snowshoes would be the right choice as we feared the snow might stick to the cleats and make us feel like we were walking on high heels–hardly our style. But, actually, conditions were perfect. Of course, my guy tried going without at first, but after creating one post hole after another, he strapped his on while I headed over to an apple tree to enjoy the view.

We were on a private property in Lovell that is under conservation easement with the Greater Lovell Land Trust.

I’d been on this property only a few days ago and the tracks were many, but with the advent of yesterday’s snow, we found only a few. One set was that of a coyote. And fairly fresh was it.

We moved quickly (of course we did for I was with my guy–but I was equally anxious to get to two destinations) and in no time found ourselves walking along beside a brook.

As we approached we wondered how open the brook might be and decided we’d cross that “bridge” when we got to it. But really, there was no bridge.

The ice, however, delighted our sense of sight, understanding, and artistic form. Like the water from which it was created, it flowed in much variety.

Without any problems, we found our way to the other side and realized we were in the company of others who had done the same. One moment it seemed we’d followed one, but then realized we were on the trail of two coyotes when their path split.

And it split for a reason. To check out a previous kill site. But they only seemed to sniff and not partake. 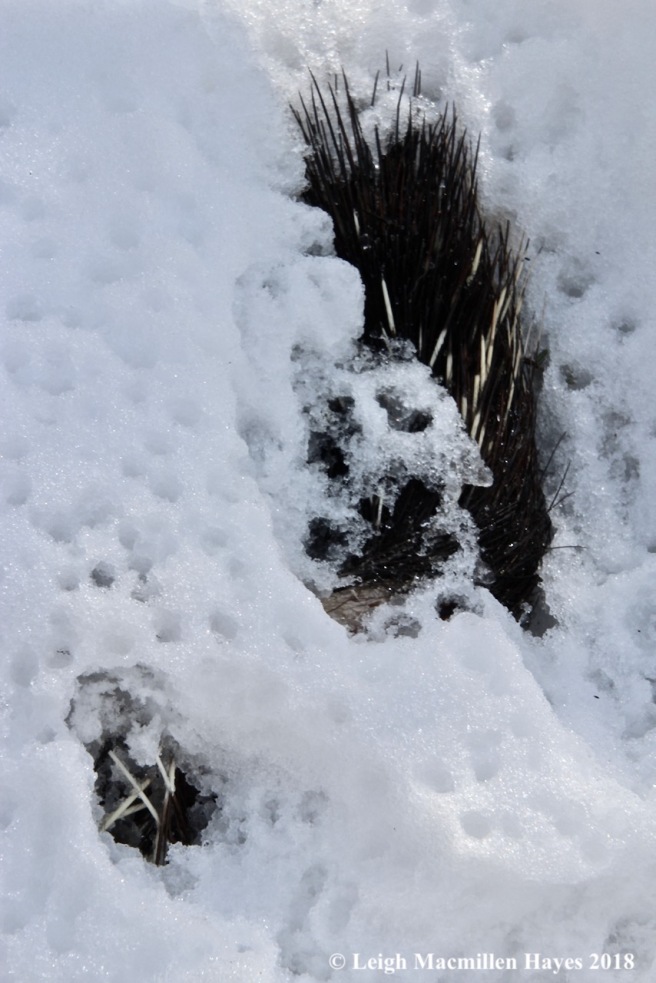 Just as well for it was a porcupine. But really, I was surprised they didn’t try to flip it over to get at the stomach. Maybe somebody else had already taken the pleasure.

On we trekked, until we reached water again. And this time we stopped to look around, while the coyotes moved on.

High in the trees across the way we spied the heron rookery–one of our reasons for visiting. We knew the nests would be empty, but still, it’s fun to take note.

And they’re easier to see in the winter than spring/summer when this rookery is monitored for the state HERON project: the Heron Observation Network of Maine. I’ve had the honor of visiting this particular rookery in the past and helping to document the number of residents. Though it was active last April, something happened later to upset the neighborhood and so I’ll be curious to see what the status will be in the future.

For today, the nests looked like they were in great shape and even two in the condominium were awaiting the return of the snowbirds who’d spent the winter south of this location.

Because we were there, I also turned to check on another tree–which sports a healthy colony of lungwort–photosynthesizing because it had been snowed upon.

We stayed for a while, my guy and I, enjoying the peace and quiet and colors and textures of the afternoon that curled around us. 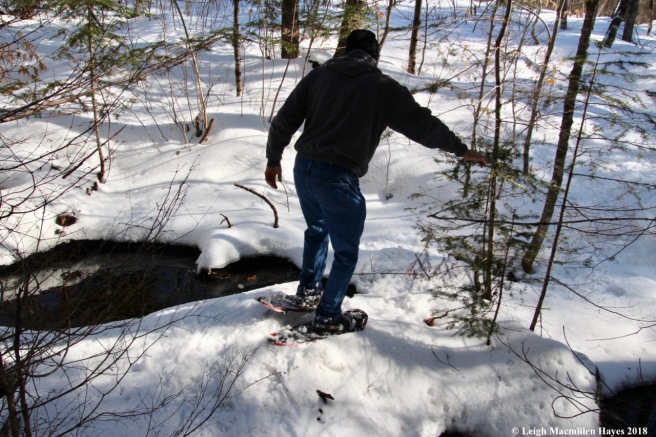 At last, we pulled ourselves away and crossed back over the brook. It was a piece of cake. Well, at least we didn’t fall in.

Our next destination took us past a condo of another sort–one created by a chipmunk who kept an eye on us, then swiftly disappeared. We could only wonder about the inner chambers of its home.

It was after that that we began to encounter the works of another rodent, this time upon striped maple.

The art pieces were sometimes large, 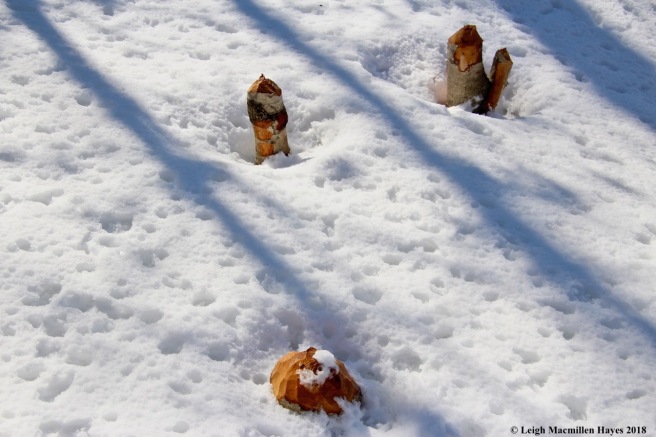 and sometimes mistaken–as in logistics of the felling.

But that didn’t matter for their buildings were many. Oops, the first one we spied was actually a boulder.

Further along, however, we found the main building. It was topped with fresh wood and well mudded, so we assumed warm bodies dined and wined within.

There was another nearby, and we could see indentations denoting visitors had stopped by prior to yesterday’s storm. We also noted that the ice had melted all around it. Was someone home? We knew not.

On we moved and then turned back to enjoy the view as shadows grew long.

Turning 180˚ again,  we looked toward the beaver dam that stretched before us. I’d last visited in late November and wondered what it would look like today. 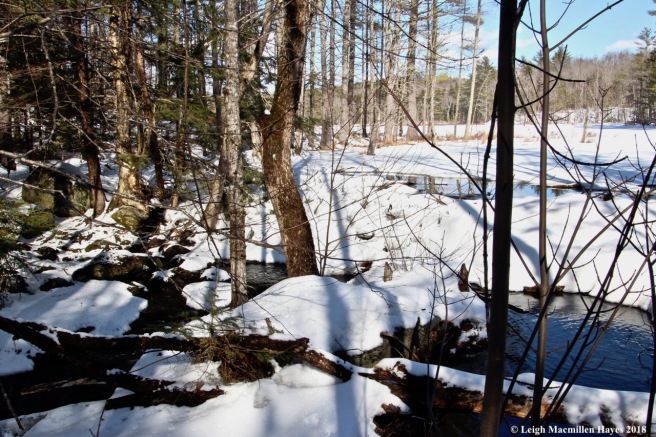 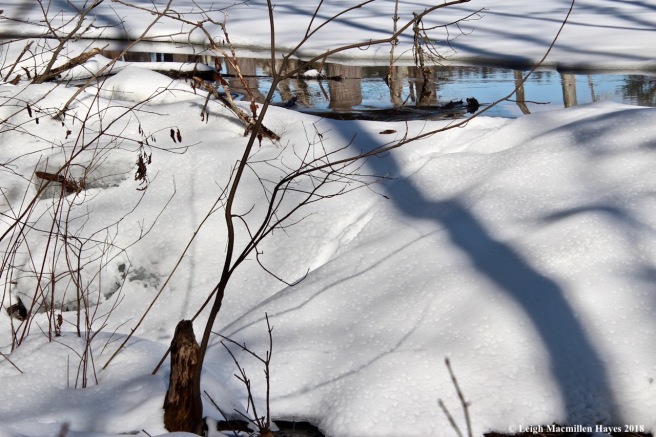 We followed him downstream–he was on the other side of the brook, but moved in his telltale manner . . . 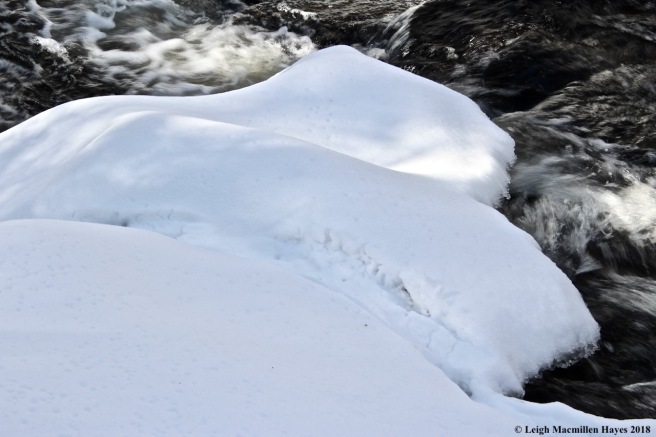 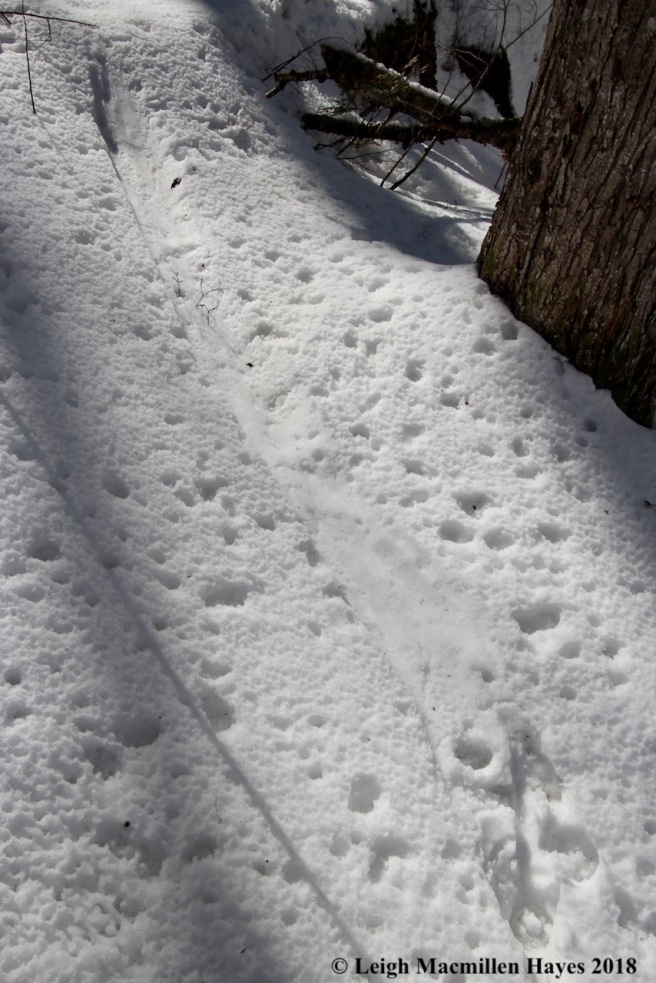 leaving behind fresh scat and prints . . . 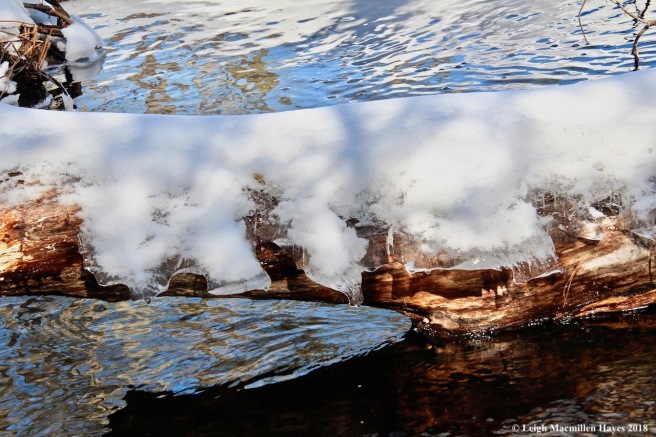 for our pleasure. We had the time of our lives watching the otter–did you see him?

Truth be told, we never did actually see him, but in our minds eyes we knew his every motion. When we first spied the prints and trough on the other side, we thought he had moved in the same direction as we did. But when he crossed to our side, and we could get an upclose look, we realized we were traveling in opposite directions. He had moved through not long before we arrived. Was he also checking out the beaver lodges? Probably. And hunting for his next meal.

Though we didn’t get to actually see this member of the weasel family, the signs left behind were enough to tickle our fancy and on this Mondate we were indeed otter spotters.