A man walked into a hardware store . . . and told my guy about a couple of mountains we should climb. And my guy came home and told me. And we looked for trail maps and found none. And we decided to go anyway because we had a sorta idea about where one of them was located.

And so we drove up Hunts Corner Road in Albany, Maine, and located a road sign that bore the same name as the mountain we hoped to climb–and the road wasn’t plowed. But . . . another man was gathering mail across the street and so my guy asked him about the trail. The man said it would be fine for us to head in and we’d probably get as far as the pond where a few old camps stood, but wouldn’t reach the summit. We weren’t sure we would either, but figured it was worth a try.

For those who have followed our Mondates previously, you’re well aware that my guy is often far ahead of me and such was the case today. The snow was deep and journey up a bit of a trudge, but that didn’t stop him. I really don’t mind for it gives me time to take in all that is around me and listen to the voices in my head. And I’ve a feeling he does the same–solving all the problems of the hardware world and any other issues that need to be addressed, plus possibly singing a few tunes to himself. The latter would never occur to me, but that’s another story. 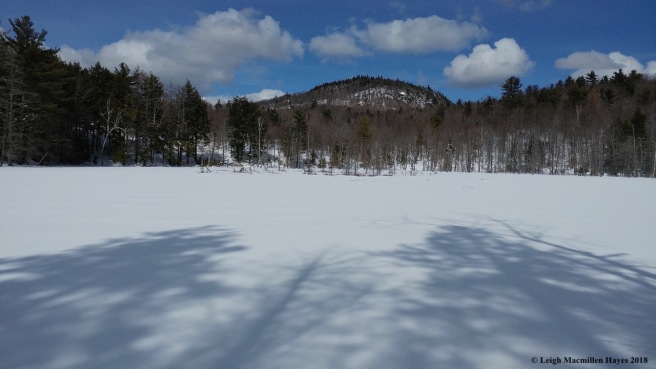 Today, we met periodically, the first time being at No Name Pond, where we enjoyed the backdrop of Round Mountain–a hike we’ve previously completed. Truthfully, this pond has no name–at least that I can find on any topo maps. 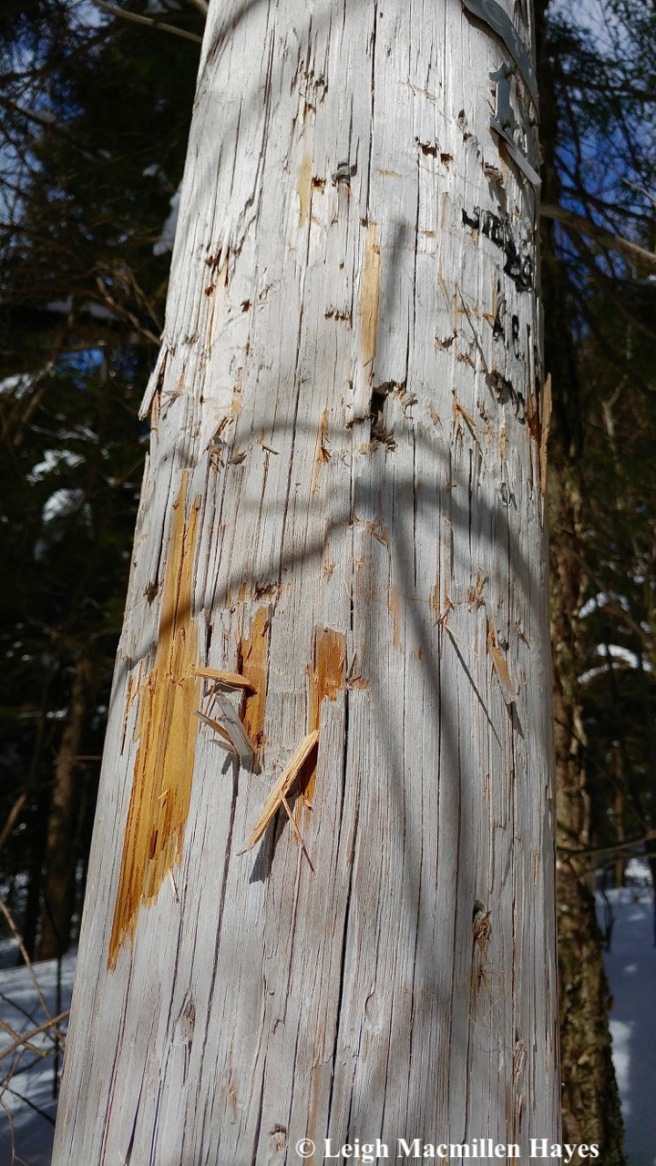 Onward we journeyed, for a few steps–because a telephone pole caught my attention. Do you see what I see? (Karen H.–I took you with me today and mentioned your name several times to my guy–read on.) Bites and scratches courtesy of a black bear.

And hair left behind. There was actually quite a bit of hair. But . . . I’d forgotten to put the battery in my Canon Rebel camera and so had to depend on my phone to capture all the moments.

We really had no idea where we were going, and when we came to a Y, chose the left-hand route, which had a few water obstacles.

And then we decided to do some bushwhacking because we had no idea where the road might lead and we assumed the mountain was to our right.

It wasn’t totally an assumption, for I’d downloaded a GPS program recently and played with it a bit. The mountain was to our right, but there was a ledge between us and it. 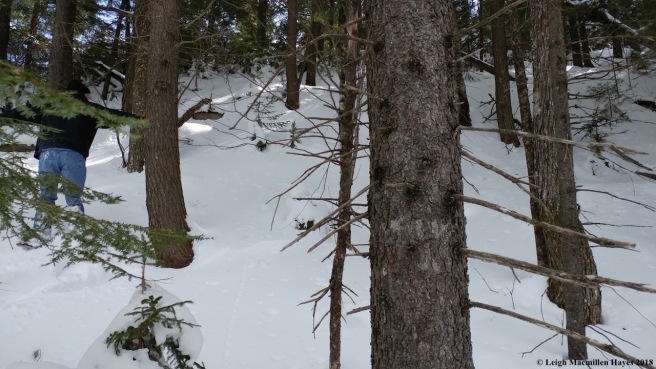 And so we did some traversing, and slipping and sliding, and offered each other advice and occasionally a hand. Well, he offered me a hand, which I gladly accepted. And all the while I dreaded our descent, though we figured we’d probably need to sit on our bums and pretend we were otters–belly up. 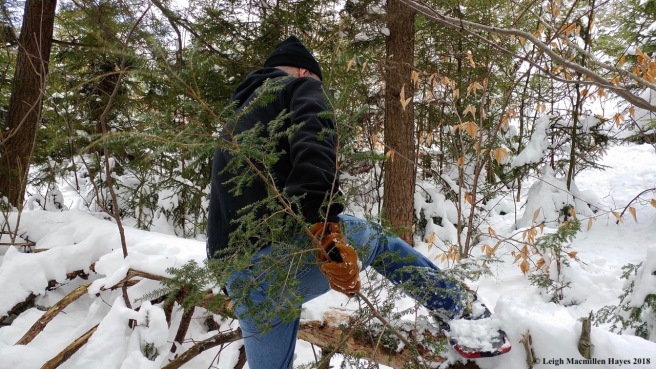 We finally saw the light of day and assumed the summit was just above. Only one more downed tree to conquer.

We did–with lots of giggles thrown in as we practiced our graceful moves. 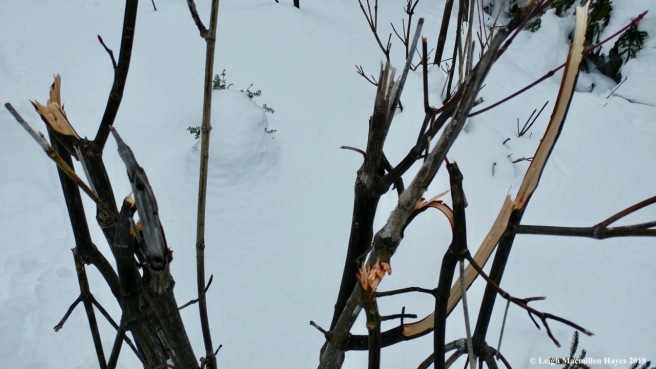 But, we weren’t at the summit. Instead, we were in moose alley for such was the evidence we found on the numerous striped maple trees. 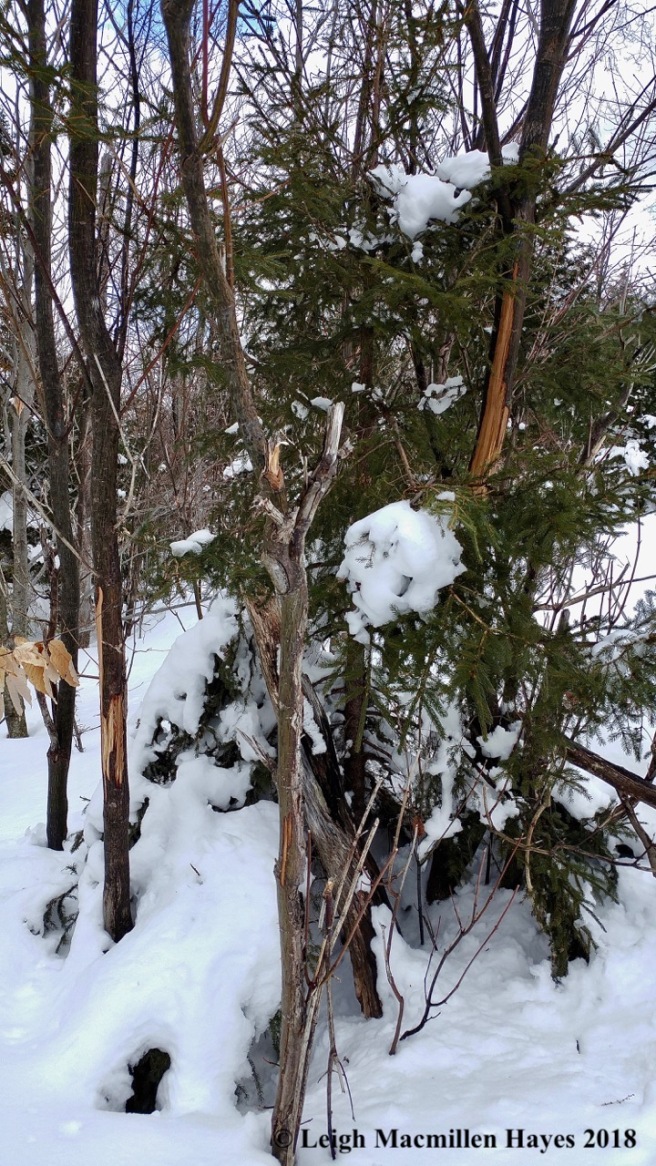 There were no fresh tracks, but we knew who had dined . . . 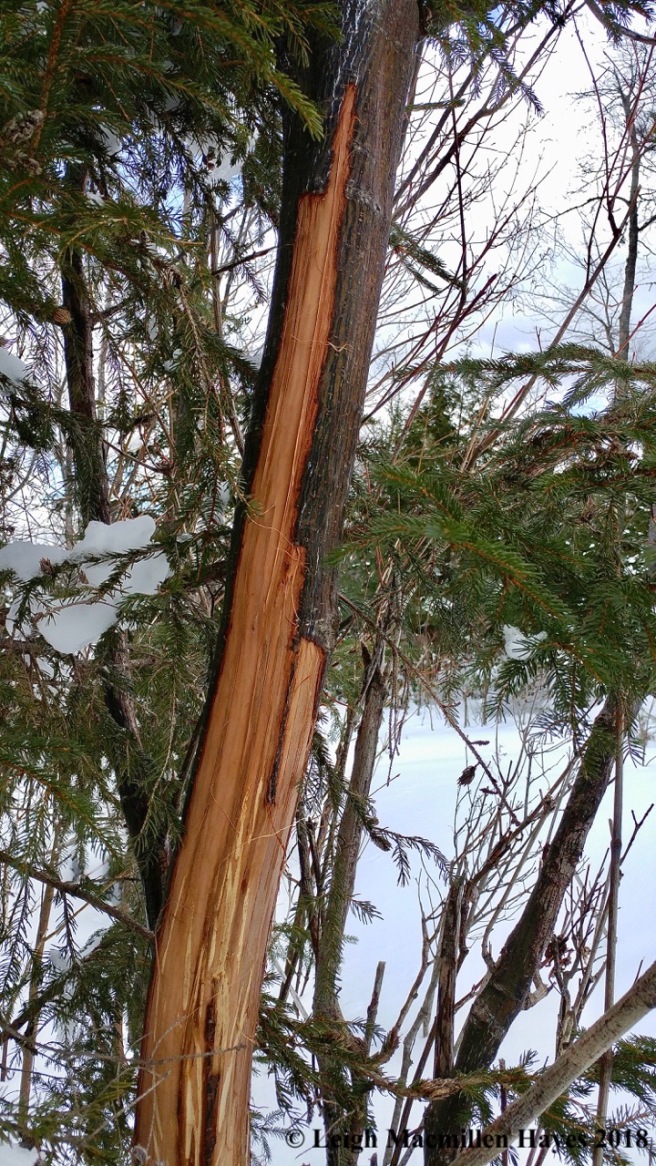 by the size of the tooth marks they left behind.

Because we were in a striped maple community, my eye was drawn to their moose nipped buds of previous years, but also to the artful twist of occasional dried leaves. 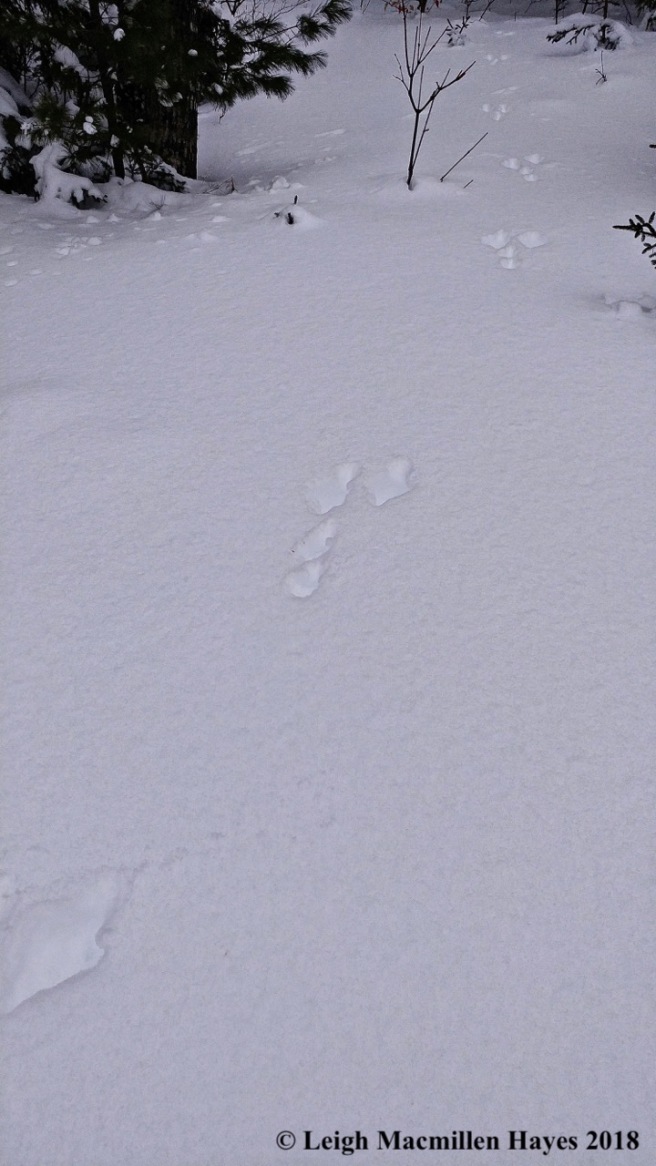 We had also entered snowshoe hare (snow lobster) territory and their tracks were innumerable. 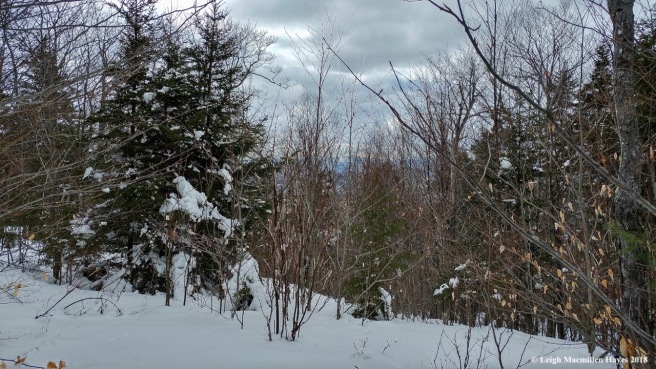 Again, we found ourselves on an old logging road, and then we decided to go off it and bushwhack some more. As we checked the GPS periodically, it showed that we were following a ridge, but still had a ways to trek.

We thought we’d been so smart when we left the road, until we swung through the forest and came to a bit of an opening where we realized it was in front of us again. Or at least we thought it was the same road. 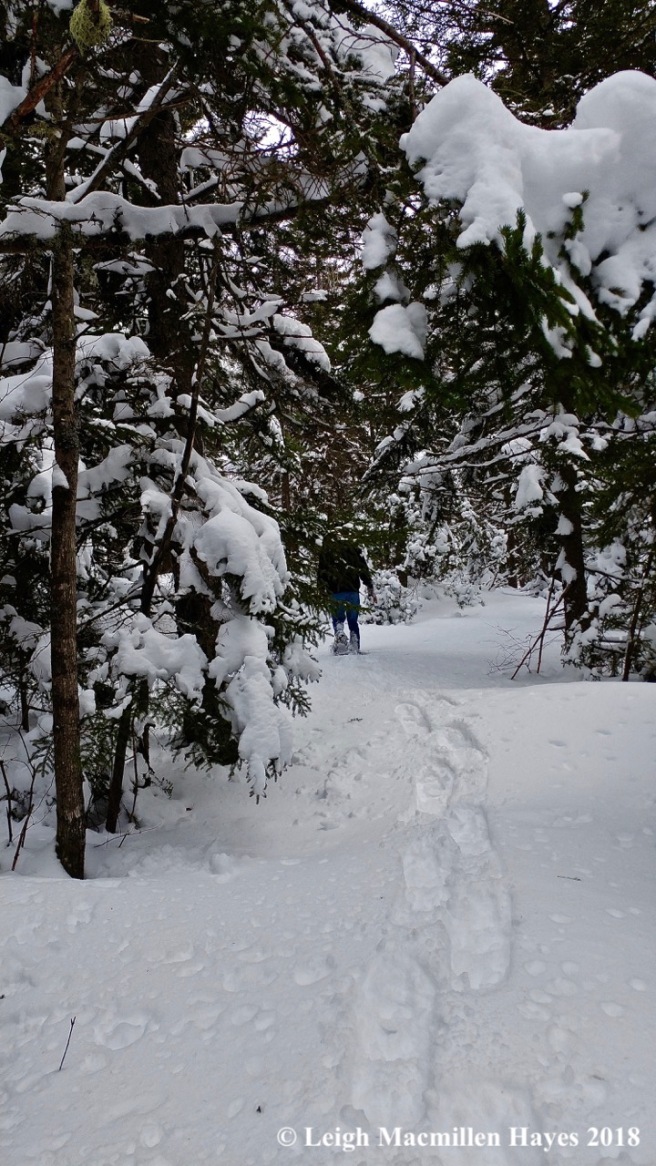 And so we followed it through the winter wonderland. 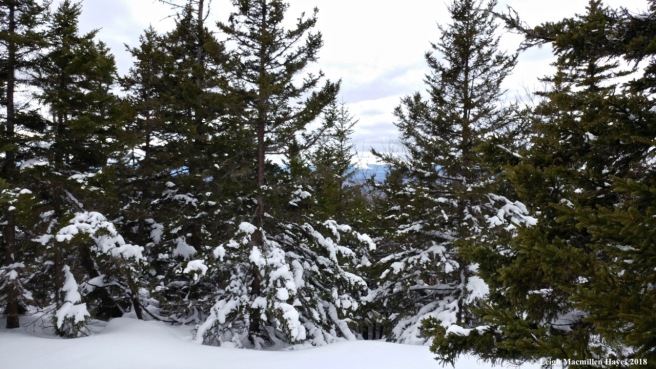 And at last, according to the GPS, reached the summit, where the view through the trees was of the Bald Faces in Evans Notch. It wasn’t much of a view–and we wondered if we might have missed one, but decided to save that thought for another time.

After treating ourselves to some dark chocolate McVities digestives, we started to follow our tracks back down. About fifty feet away, we spotted a cairn we’d walked right by–it was large and we didn’t know its purpose. To mark the summit? Or did it represent something else? 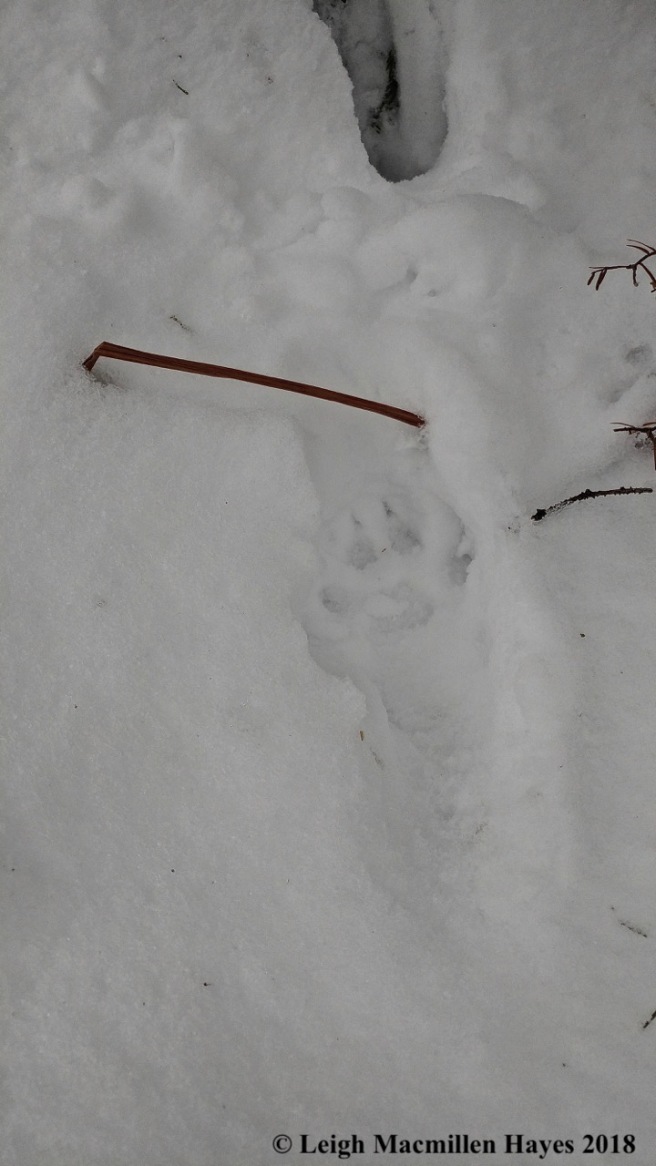 On the way back down, we paused again–by some prints I’d seen earlier. Yes, Karen–this one is for you. A bobcat indeed. Because of the deep, soft snow, its nails had provided traction.

When we reached the spot where we’d done some bushwhacking, we decided to take a chance and stay on the road. It proved the right choice and soon we picked up our previous tracks.

And then we got to see a couple of other things we’d missed on the way up, like this quartz snag. Huh? Funny things grow in trees ’round these parts.

And big mammals climb trees ’round these parts. 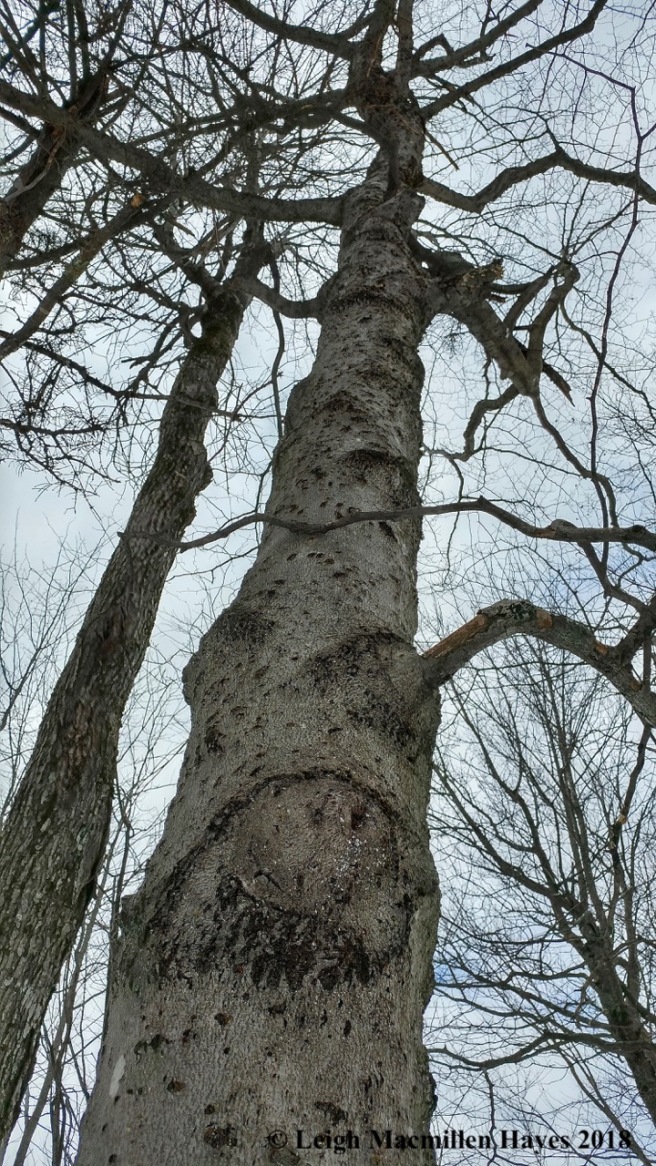 Just below that we found ourselves back at the point where we’d climbed up the ledge. And discovered that the road turned to the right. Again, we weren’t sure we were making the right choice, but decided to take our chances. Bingo–it eventually curved around and we found our own tracks once again. We were tickled with ourselves and paused by one of the old camps to take in their view–the same view we’d enjoyed from above, but more open because some trees had been cut.

Roger Lowell had suggested this hike to my guy and the man collecting the mail said that the land belongs to the Stiflers, who own Round Mountain, Long Mountain and Overset Mountain, all hikes that we had enjoyed in the past. We weren’t sure the mountain road we were on was open to the public, but we gave thanks to Roger for the suggestion and the Stiflers for not posting the land. And we toasted this Mondate with sips of water–as we appreciated our love and joy for today’s journey–on Lovejoy Mountain.