We headed south today in search of spring. LOL! Indeed, we found as much snow on Sawyer Mountain in Limington as we have in western Maine. 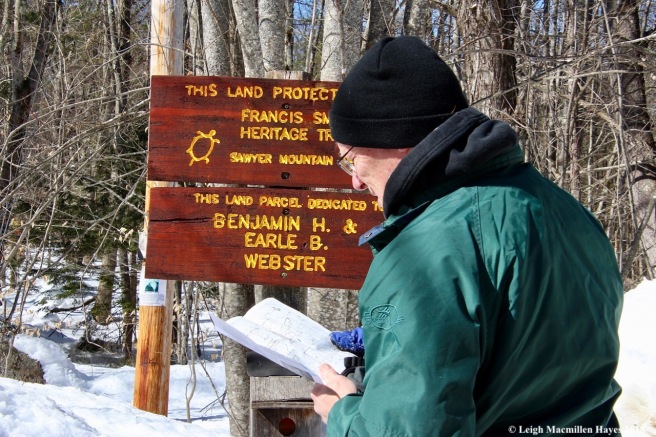 The mountain was a new one for us. It featured two trailheads and we chose the one on Route 117 where only one map was available. We borrowed it and later returned it for others.

Much of the mountain, as in 1,472 acres, was purchased over the course of eleven years by the Francis Small Heritage Trust. According to an article in the Portland Press Herald written by hiking enthusiast Carey Kish in May 2016, “Francis Small, the namesake of the trust, was a fur trader and landowner who lived from 1625 to 1714. Small is said to have owned the largest amount of land of any person who has ever lived in Maine.

Newichewannock Abenaki tribesmen who owed debts to Small plotted to kill him to avoid payment. Their chief, Wesumbe, warned Small in time to foil the plan, but not before Small’s home was burned to the ground.

Wooden blocks with yellow turtles carved into them blazed the trail. According to Kish, “This is the mark of Captain Sandy, also known as Chief Wesumbe, of the Newichewannock Abenaki tribe.” Having been a turtle enthusiast for most of my life, I smiled each time I saw one.

Not everyone felt the same way. Less than a half mile up, we came upon a cabin beside the trail. It had been named Camp Ticumoff. Say it slowly. 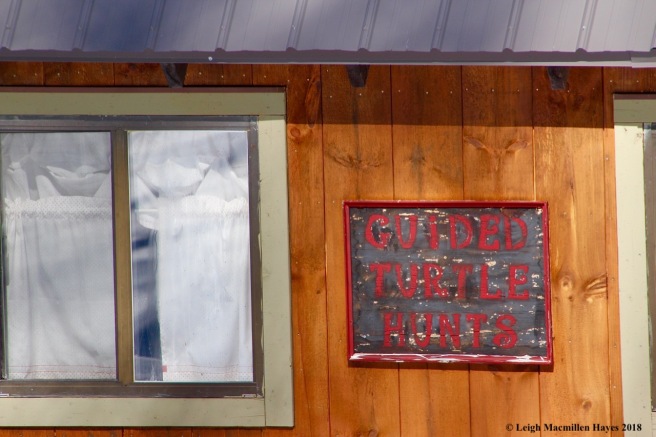 Zooming in on the side of the cabin, we noted a sign–“Guided Turtle Hunts.” And there was another sign as well about the Francis Small Heritage Trust being an ethically challenged organization. We weren’t sure what it was all about, but obviously not all were thrilled with the trail that we immensely enjoyed.

Continuing on, we came across the first of several cemeteries. With the snow so deep, we didn’t climb up to inspect the gravestones more carefully.

But in the center stood a marker recognizing various members of the Estes family. Salome died March 30, 1874, aged 66 years, 11 months and 6 days. We often see that in old cemeteries–the number of days into the person’s final month indicated.

As we crossed over a brook, a caution sign gave an indication of its own–did I mention how deep the snow was?

And then we found another turtle reference–on the negative side. Definitely some unhappy neighbors in the old ‘hood. 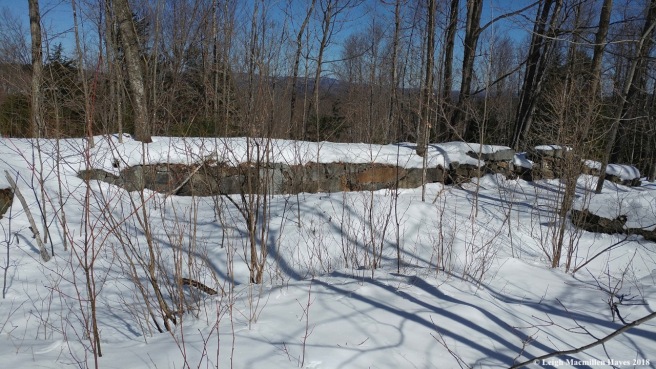 We were in an old ‘hood, after all, for most of our journey was along Sawyer Mountain Road, which was discontinued over one hundred years ago. Left behind were not only cemeteries, but also foundations, this one quite large and I wasn’t sure if it was a home or a barn. 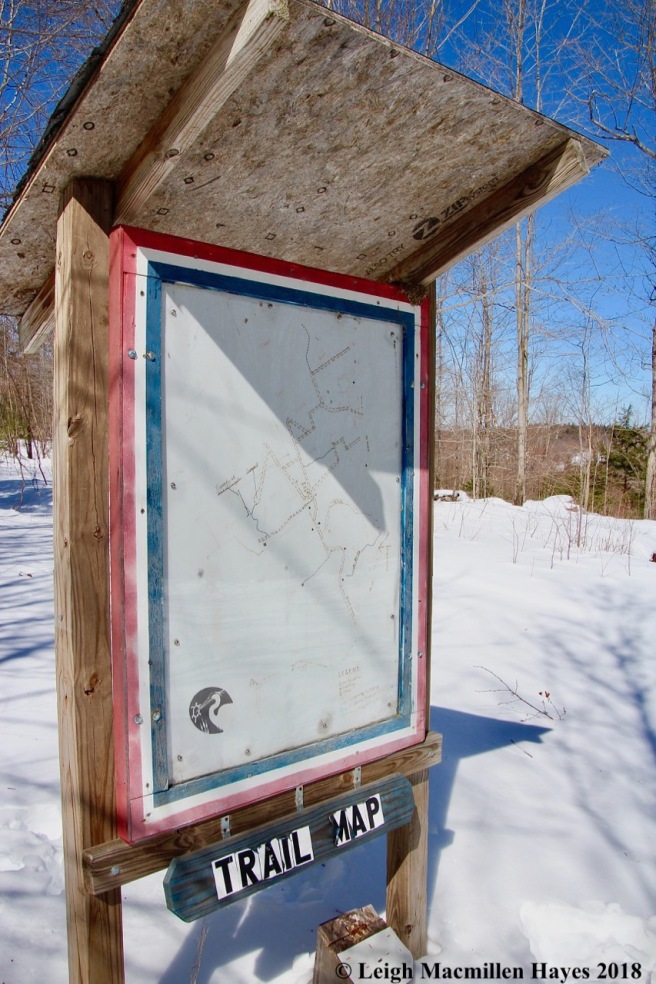 Right by the foundation, we stood for a few minutes and examined a trail map. 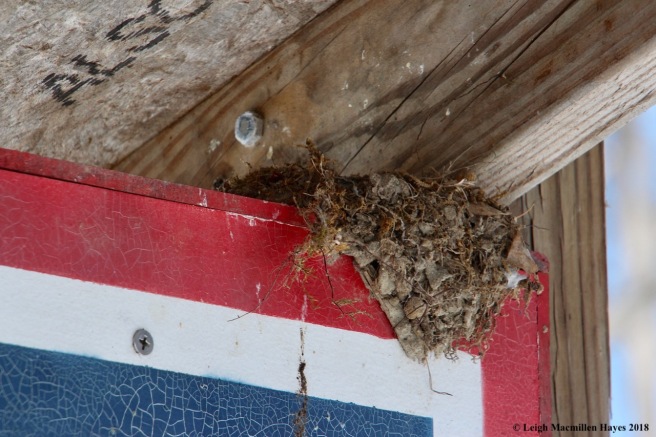 Apparently others have examined it as well, and decided it suited them. I wasn’t surprised. Kiosks often serve as nest sites for Eastern Phoebes, which I trust will return soon.

It was about a mile and a half to the spur trail that led to the summit. All along, we noted the lack of mammal activity. Not total lack, for occasionally we did see squirrel tracks, but that was all. And then on the spur we found lots of deer activity–where they’d pawed through the snow in search of last year’s acorns.

Apparently they don’t have a feeding station like the deer in our neighborhood.

At last, we reached the summit, the site of a whale oil lighthouse used for navigation within Portland Harbor during the eighteenth century. It’s our understanding that the mountain is visible from the ocean so sailors would line up the light with other points to guide their ships into the harbor. We had hoped for a view of the ocean, but as it turned out, the summit was rather anticlimactic. To the northwest, we did catch a glimpse of Sebago Lake, but that was about it as too many trees had taken over the space. It didn’t matter too much as we’d enjoyed the climb and the history, both old and new, encountered along the way. 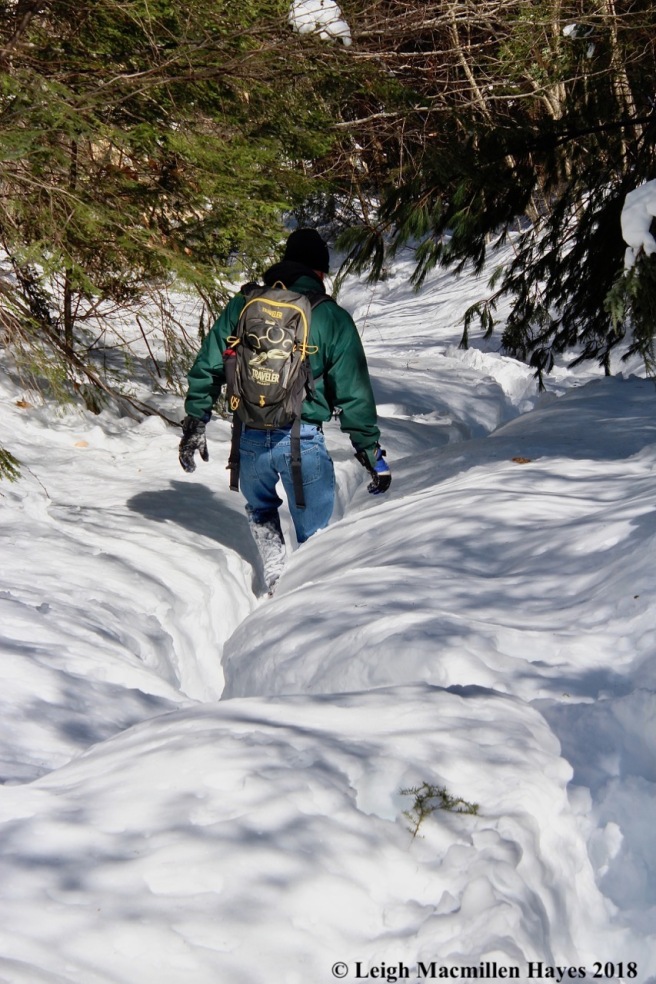 After sharing lunch on two tree stumps at the summit, we began our journey down, again traveling through deep snow. 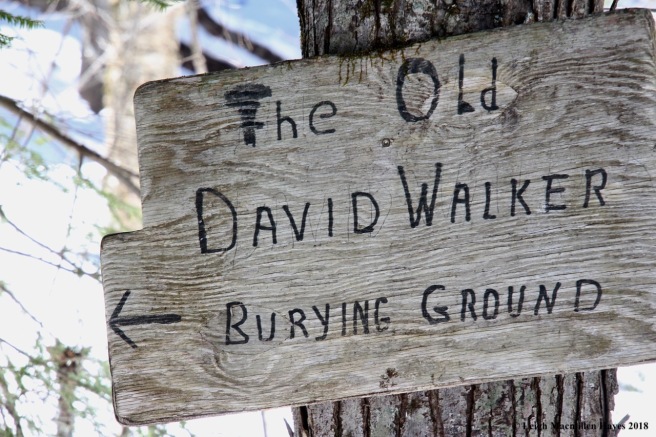 Because we were on our way down and no one had previously carved a trail to another cemetery, we decided to go for it. We’re not sure what the sign meant–was David Walker old? Or had his burying ground been moved to another site? 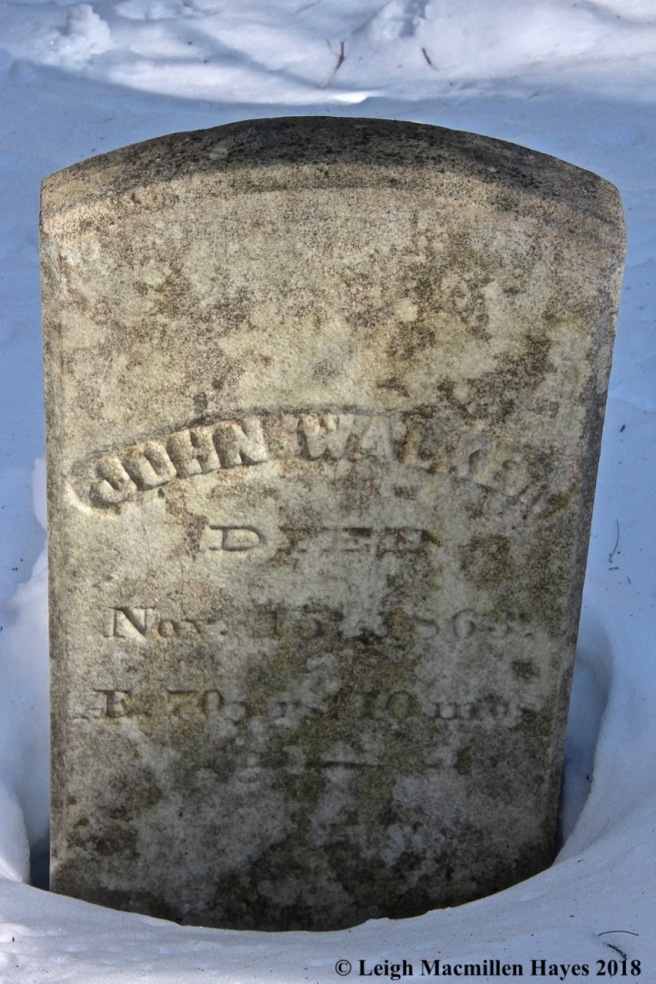 Up a hill, we located a small plot with a couple of stones. The first was for John Walker, who died in 1863.

And then another leaning against a granite pillar–so my guy wiped the snow away.

That one was for Ebenezer Walker. So where was Old David Walker buried?

And so I followed the blue turtles and decided to interpret the trail my way. 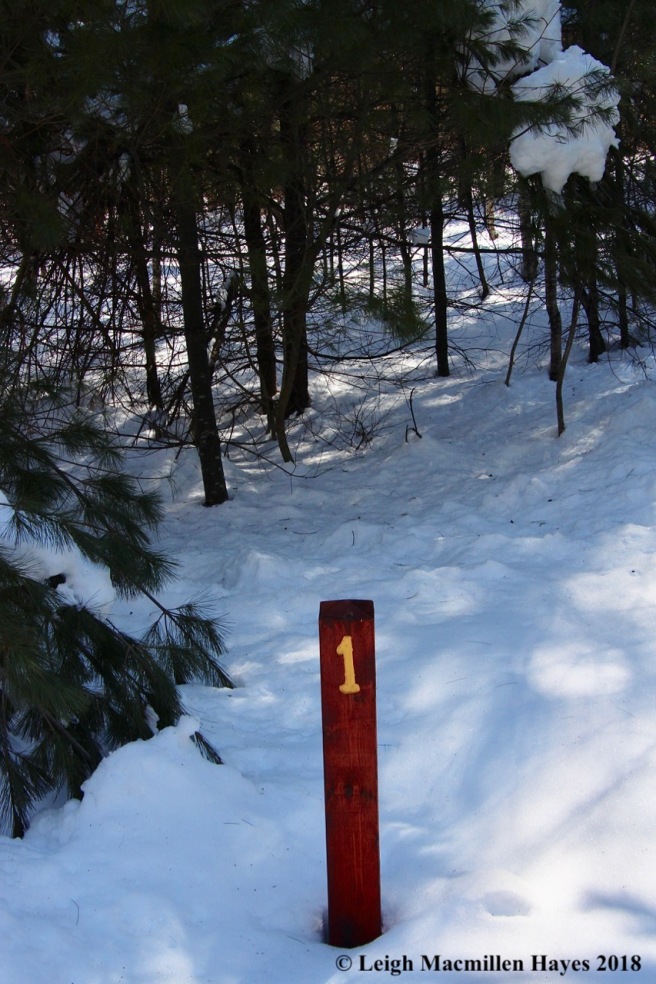 1. White pines: the Maine state tree, took advantage of the clearing and started to fill in the space.

2. Stories in granite: A stone wall at least four feet high; a lacy wall perhaps built to keep sheep in or out.

3. Hemlock grove: The perfect habitat for mammals, including deer. Because of their evergreen leaves (needles) that hold snow, its easier for critters to move below them. 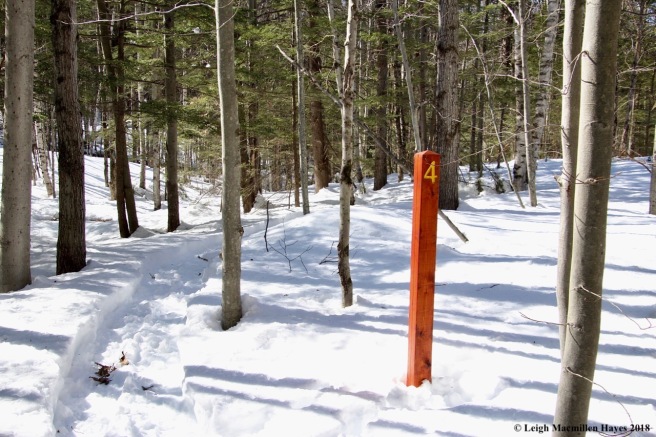 5. Glacial erratics: Large boulders dropped by the last glaciers about 12,000 years ago.

6. Life on a ledge: From lichens and mosses to  hemlock trees, the ledge was a prime example of the abiotic and biotic interactions that create an ecosystem.

7. I dunno: A piece of blue flagging and another of orange. Perhaps it was the downed trees to the left–several hemlocks had fallen during a storm with winds out of the southeast–indicating a summer storm probably.

8. I Dunno Ditto: Perhaps the stream that flowed just below.

9. Big White Pine: But really, was it the tree?

Or the giant boulders beside it?

Perhaps one day, I’ll learn how I did on the quiz–though I do think I got at least two wrong.

I rejoined my guy and together we reflected upon our journey. One of the things we most enjoyed was the historical features along the way, including the 1940s hunting camp built by the father of Sherwood Libby, one of the Trust’s founders. 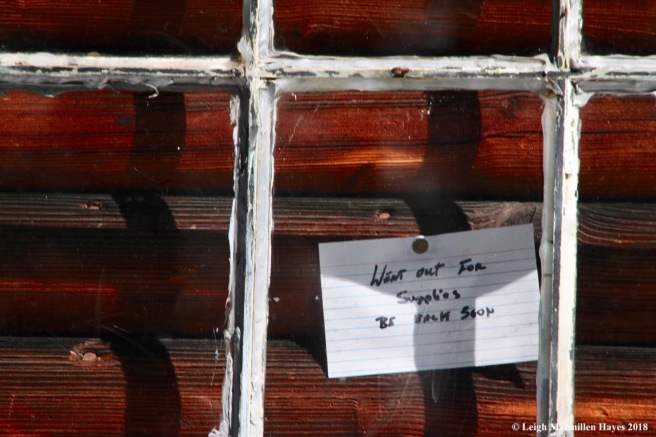 And our absolute favorite–a sign on the hunting camp door–“Went out for supplies. Be back soon.”

We will also return–once the snow melts– for there’s so much more to see, as well as other trails to explore. What a fine place for a Mondate on this last day of winter. Be Back Soon. Indeed.

6 thoughts on “Back Soon Mondate”