Life, it seems, is always in transition. Or perhaps it is a series of transitions that we experience on this fast boat as we whiz through time and participate in endings and beginnings, with learning opportunities thrown into the mix. So it feels, when one season overlaps another. 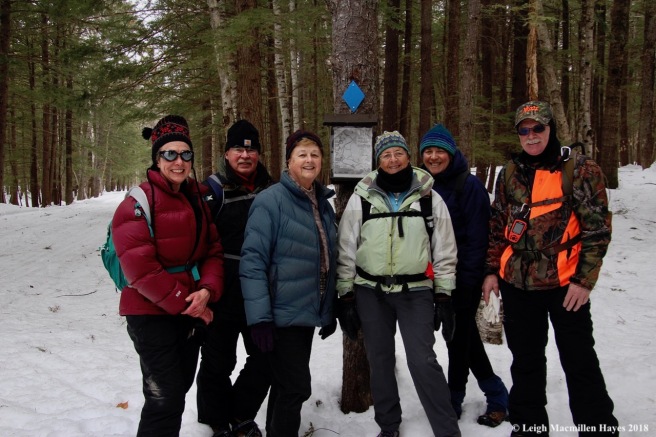 And so this morning, I enjoyed the opportunity to experience the natural transition from winter to spring at Sebago Lake State Park with a group of seven led by AMC volunteer JoAnne Diller. (JoAnne donned the lime green coat.) 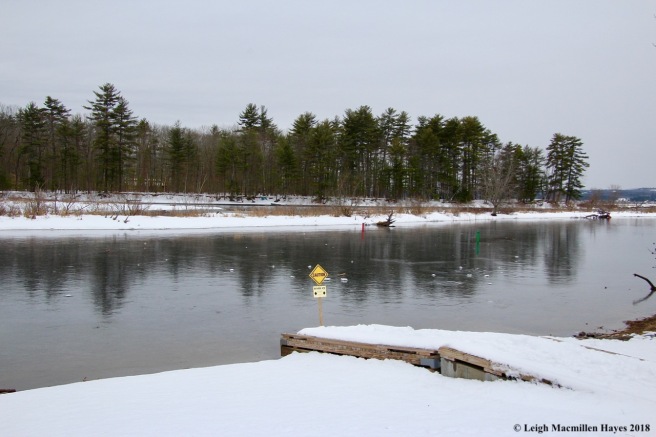 We began our journey at the boat launch beside Songo River, where signs warned of thin ice and Canada geese honked in the distance. 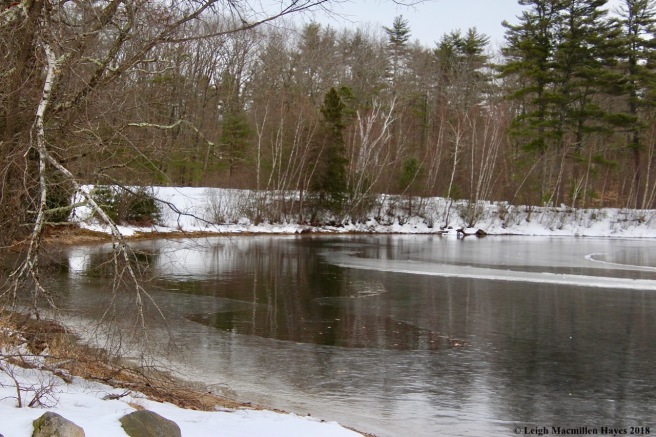 Tree buds added a subtle hint of color to the landscape. And the ice in the oxbow indicated nights of cooler temps followed by days of warming. 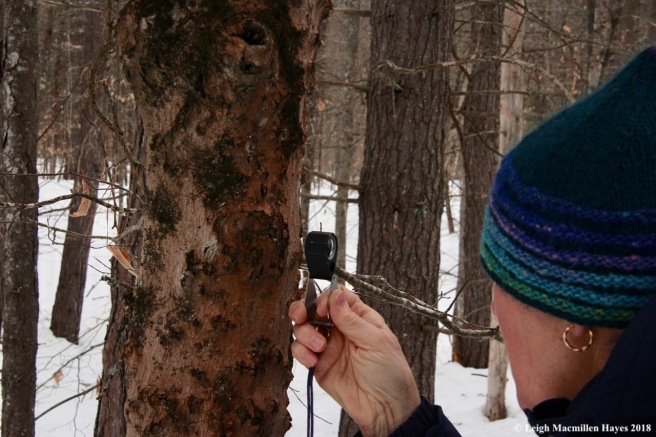 Trees within the forest showed other signs of change for we noted the cinnamon tinge on many a beech tree. Not all transitions were good.

The trees were dotted with the waxy exterior winter coating of the beech scale insect, Cryptococcus fagisuga, a tiny insect that sucks sugar and other nutrients from beech trees only.

Soon, the beech scale insect will molt into its second, legless nymph stage and emerge. Immediately, it will start sucking sap through its tubular mouthpart or stylet. That instar stage doesn’t last long, and quickly it will become a mature female. For the rest of its life it will remain sedentary, but repeatedly remove and reinsert its piercing stylet, wounding the tree and providing entry points for fungi to enter. An interesting fact about beech scale insects–its a world of females who reproduce by parthenogenesis; there are no known males.

But what about that cinnamon color? Was it a fungus? Or was it related to the insects? Yes and yes. Two species of nectria fungi are associated with beech bark disease, Nectria coccinea var. faginata and Nectria gallengia. What we examined was a large area of the former’s fruiting bodies. 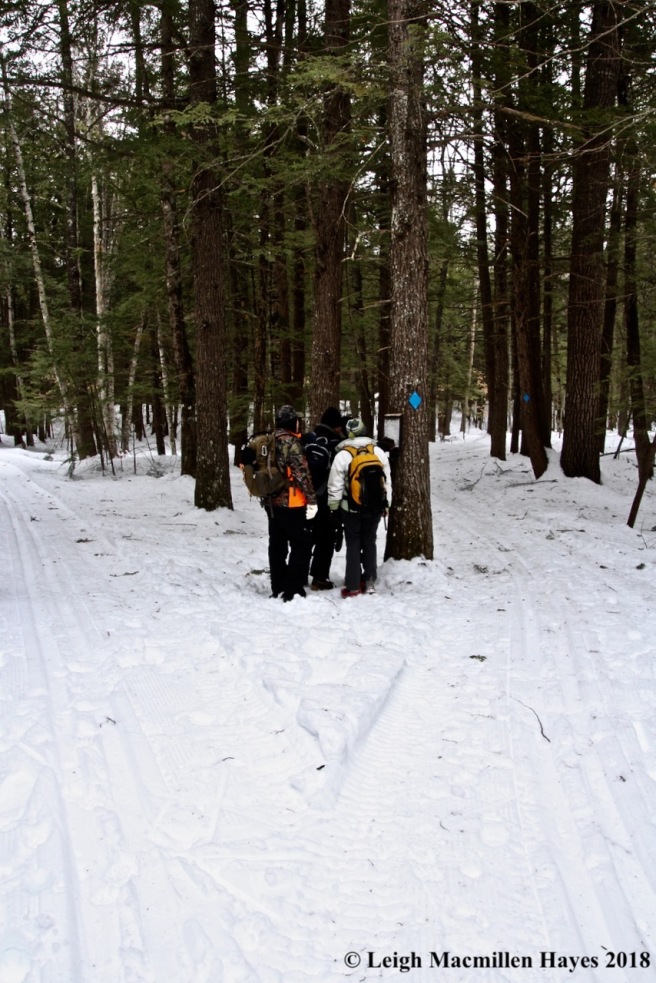 For the most part we followed the groomed trail system, though we did do some post holing as we crossed from one route to another. And then we came to a fork in the road–so we took it! Actually, first we went left and along the way startled some deer. And realized we weren’t exactly where we wanted to be so we backtracked and journeyed on to the right. How often does that happen on this boat ride? Frequently. But the best part about today was that no one complained because we were all happy to travel the trail and enjoy the world around us. 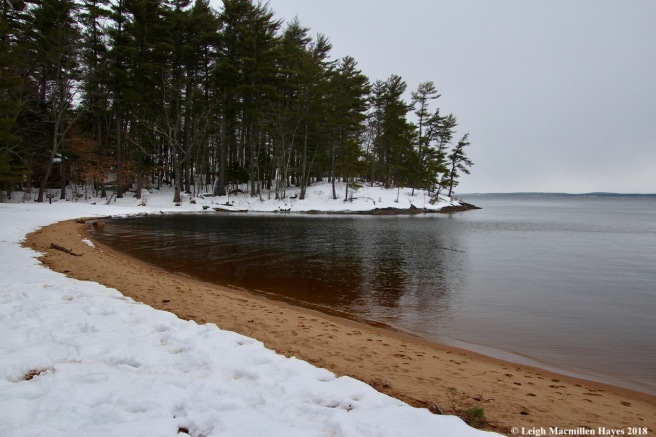 At last we arrived at the beach on Sebago Lake, where snow and sand in the cove and small bits of ice moving with the gentle waves spoke of what is to come. 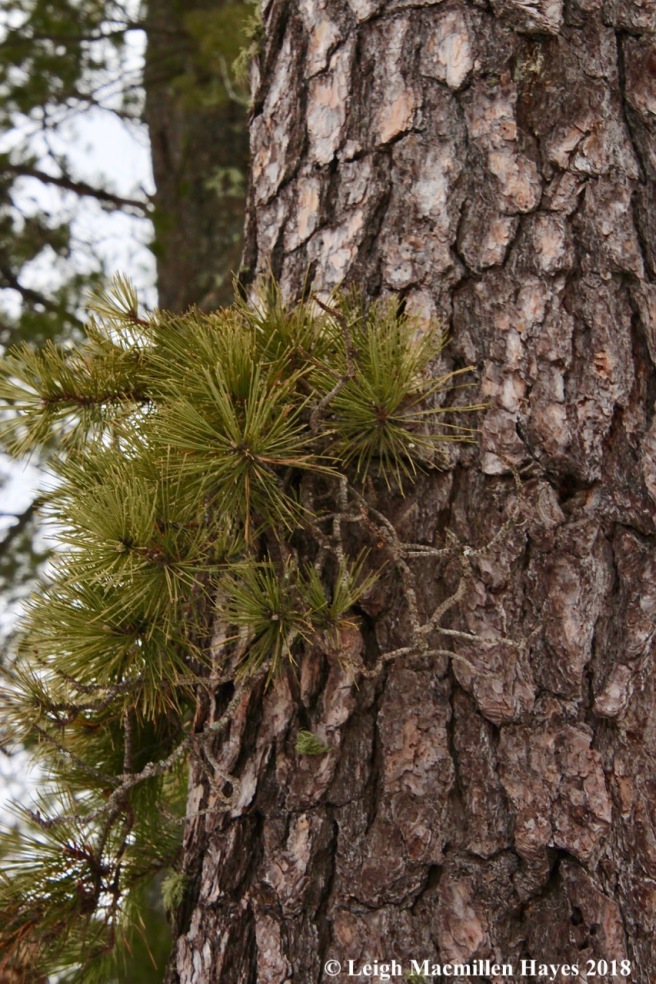 It was at the same spot, where we paused at a picnic table to eat a snack, that we stood in awe of the pitch pines as they showed off their plates of bark thickened by age and unique manner of needles growing from the trunk. 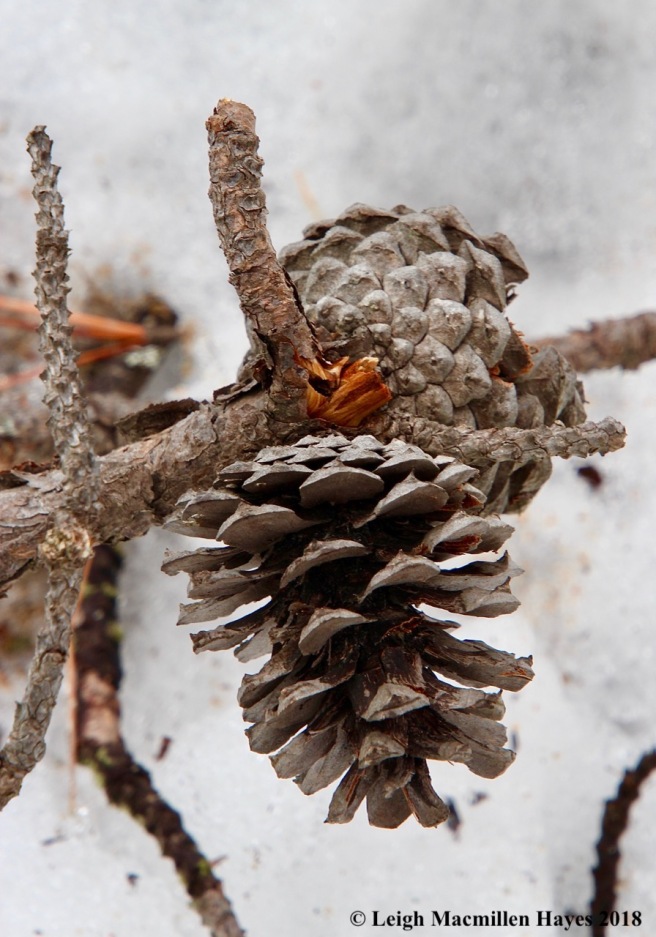 Even their cones, each scale topped with a rigid prickle, were beginning to break down as they began their journey of giving back to the earth. 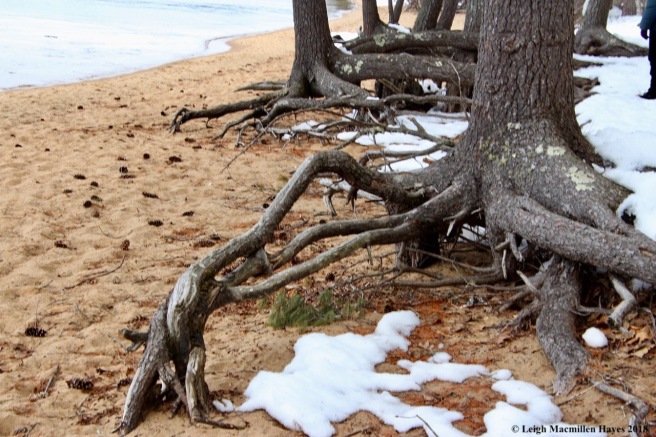 But what struck us the most were the tree roots all along the beach. And we began to wonder what had happened. 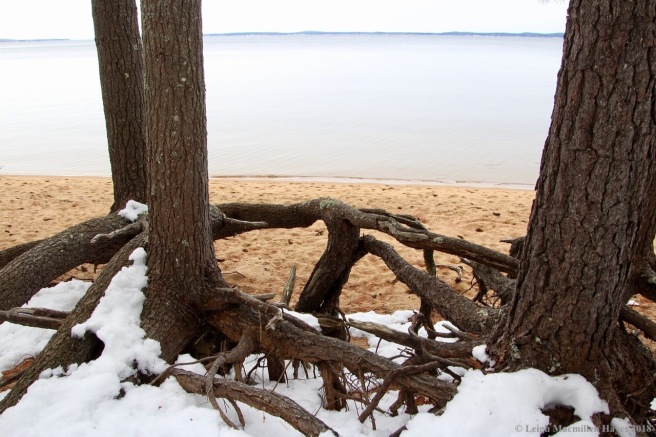 How old were the trees? Had the sand eroded? 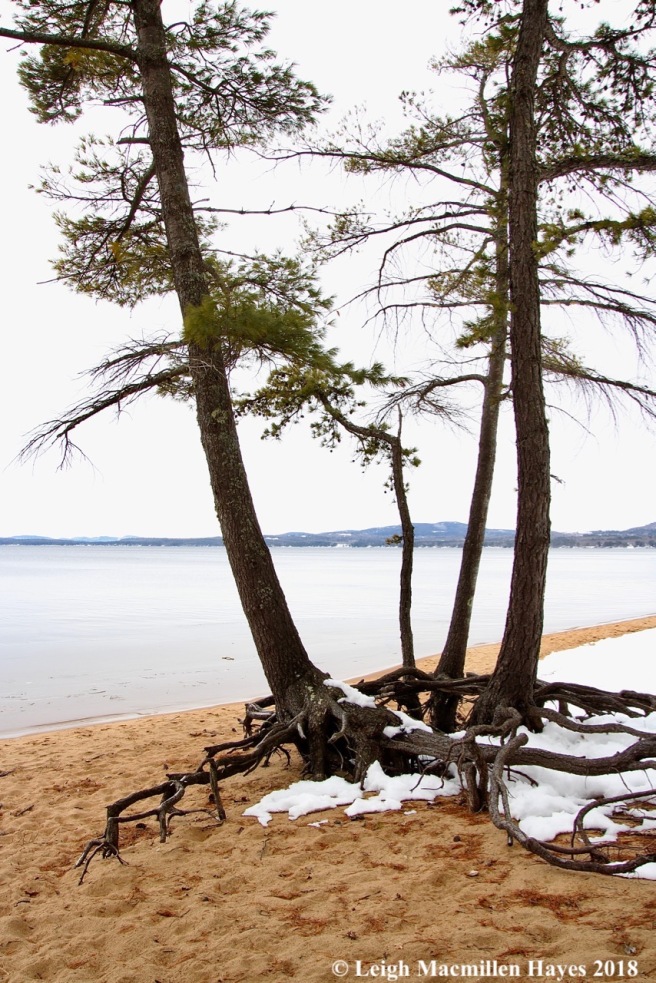 Was the lake once much higher? And how do those trees survive? If only they could talk, we would hear their stories of pounding waves and raging storms. And maybe other adversities. Maybe they do talk and we just don’t know how to listen. 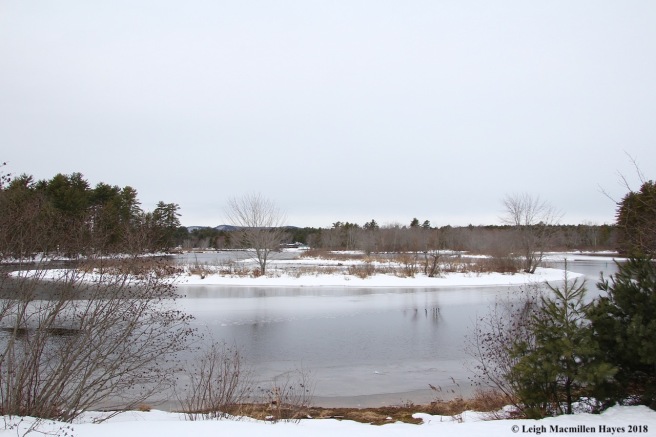 In what seemed like a flash, I realized we were on the opposite end of the oxbow I’d photographed when we first arrived–our journey had been a circular one, well sorta. 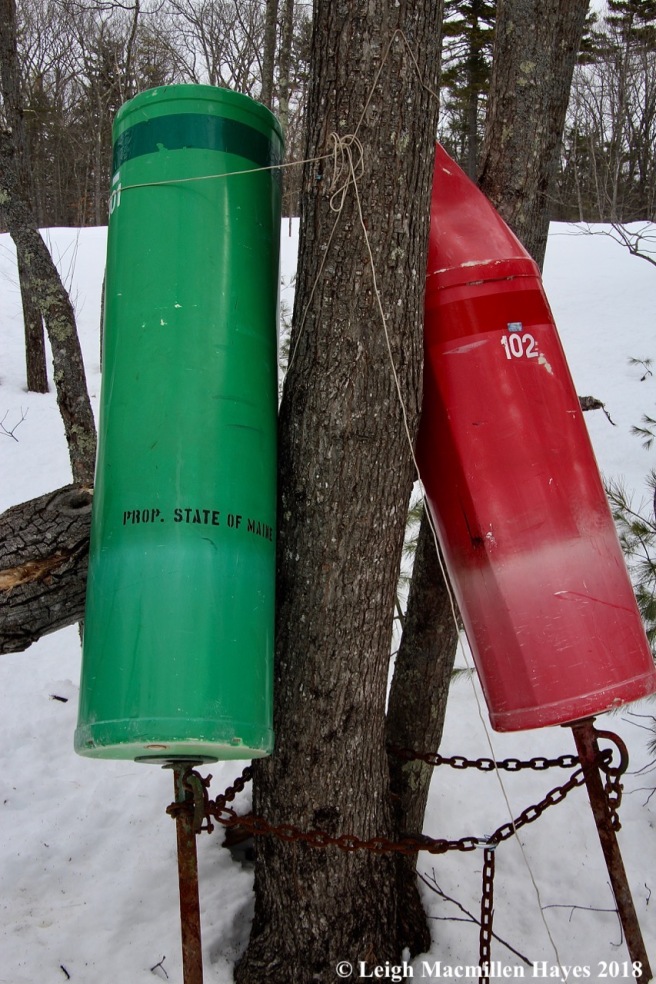 By the boat launch two channel buoys waited patiently for spring to return in full force so they could move onto the river and do the job for which they were best suited. 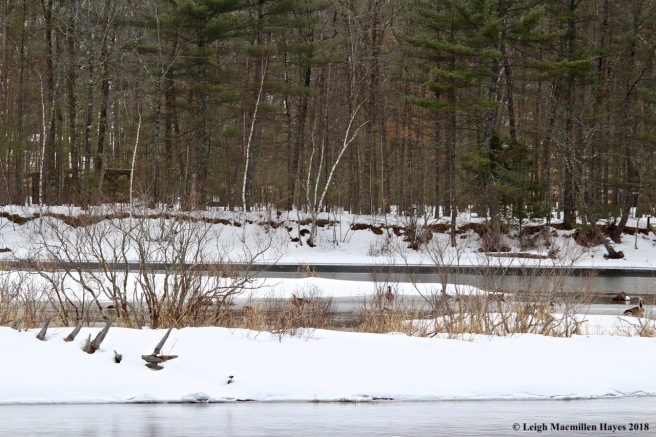 We took one last look before saying our goodbyes and going our own ways on this journey we call life. That’s when we spied the Canada geese–a sure sign that spring really is just around the corner.

Thank you, JoAnne, for organizing such a delightful hike and allowing us to absorb the richness of the woods, river and lake as they remind us about the transitions in life.

*And Tom, this trek is for you, and your own transition.  Love all.