I walked today with intent, as I sometimes do, only that intention morphed between the beginning and ending of my journey. You see, I awoke with a need to reach a certain heron rookery that I’ve helped monitor for the Heron Observation Network of Maine during the off-season,  before the owner of the land returns. It’s a bit of a bushwhack to reach the site and in the past, I’ve accompanied Tom for this citizen science effort. Each spring, we’ve visited it at least once to count the number of nests and adults. Sadly, Tom won’t be joining me this year and so I headed off this morning to see what I might see–and be his eyes.

They were big eyes to fill–as big as the red squirrel who paused to watch me and then dashed along a stonewall on a mission of its own making. 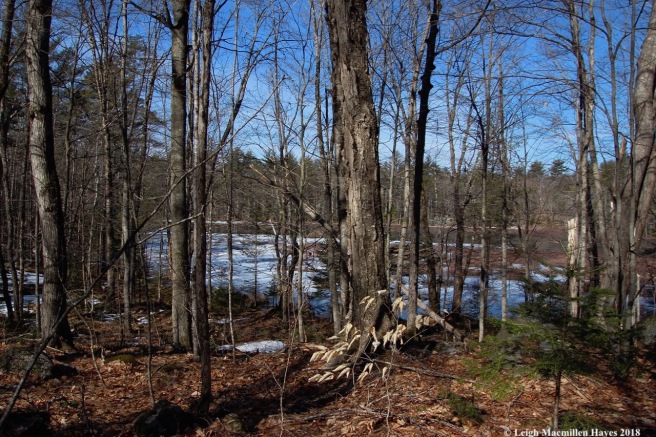 Initially, the journey was a bit of a bee line as I followed a snowmobile trail. It was there that I delighted in the color of the sky and realized that most of the ice had melted on the beaver pond and brook below. I could have headed down to the water’s edge then, but chose to continue toward my destination.

I was almost there, when an old beaver dam forced me to stop. And then I heard a loud crash. I scanned the area and stood still–listening, waiting, wishing.

And then another noise–of movement. Again, I stood still. Nothing. 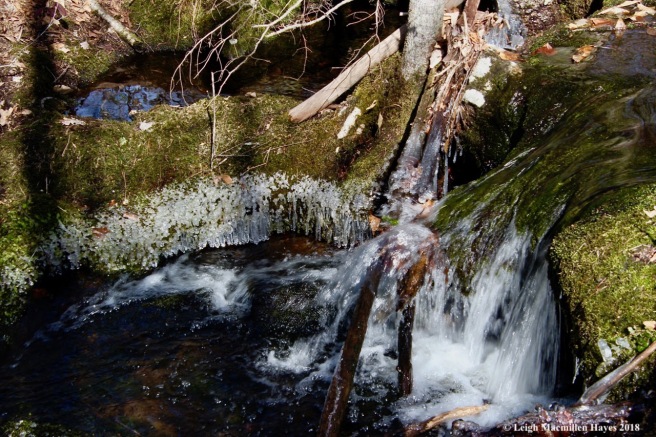 Finally, I arrived at the land bridge that would lead me to the rookery, but . . . my journey stalled and I realized I’d have to save the crossing for another day. Water rushed over the mossy mounds and because I was alone I decided not to risk falling in. As I stood and admired the flow, I thought some more about Tom and the crossing he is making from this life to the next.

And I thought of his sense of wonder and ability to instill such in others, even over something as simple as ice baubles.

I could hear an eloquent explanation flow forth from him about the movement of bubbles within an icicle formed on a branch.

And I knew he would appreciate the artistic rendering before our shared eyes–in this case a wee bit reminiscent of M.C. Escher’s Transformation Prints. 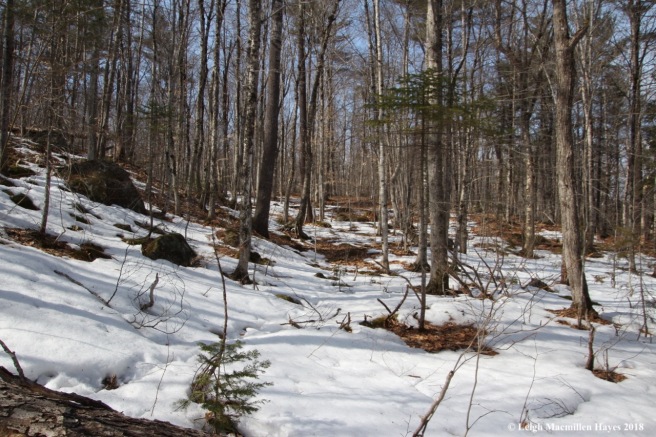 At last I pulled myself away from the crossing I couldn’t make and turned back toward the forest from which I’d come. Tom had a hand in the vision of these woods–as a forester and as the executive director of the Greater Lovell Land Trust. His vision included forest management that would benefit wildlife. From where I stood, I saw turkey, deer, bobcat, and squirrel tracks.

A third time, I heard a sound and knew that I wasn’t alone. We never are, are we? 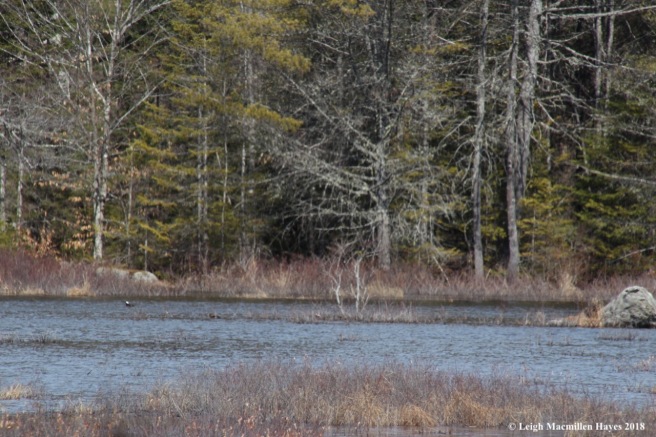 Eventually I made my way to the water’s edge and noted Hooded Mergansers in the distance. Around another bend, I spotted Wood Ducks. Tom would have loved it for birding was also one of his passions. 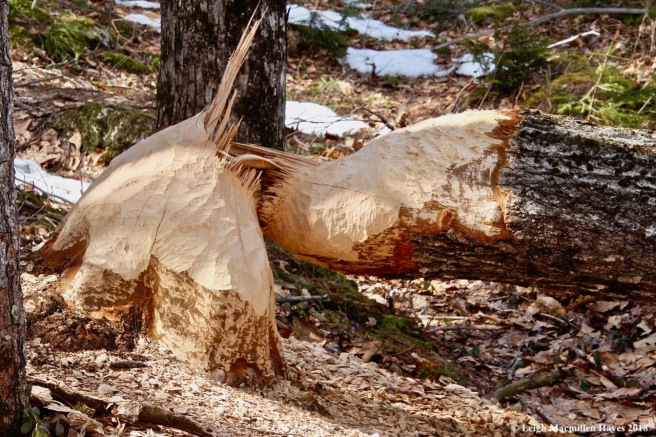 Within footsteps I admired the work of another forester who called this place home.

It seemed he’d sampled some trees and they weren’t to his liking–at that moment. Or perhaps something had startled him and he quickly retreated to the water. Either way, he treated this land as if it were his. For it was. 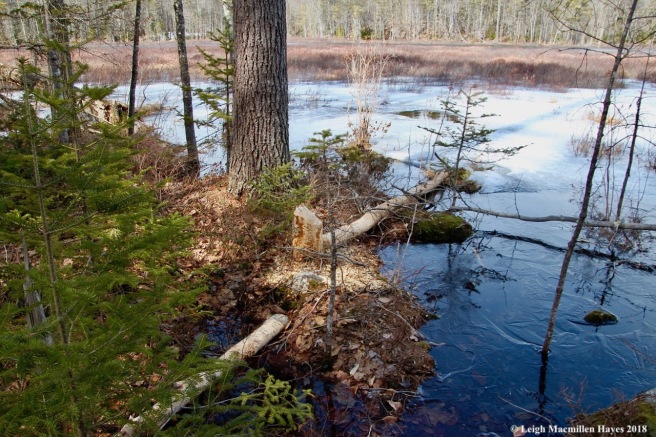 Everywhere, beaver works both old and new decorated the forest. 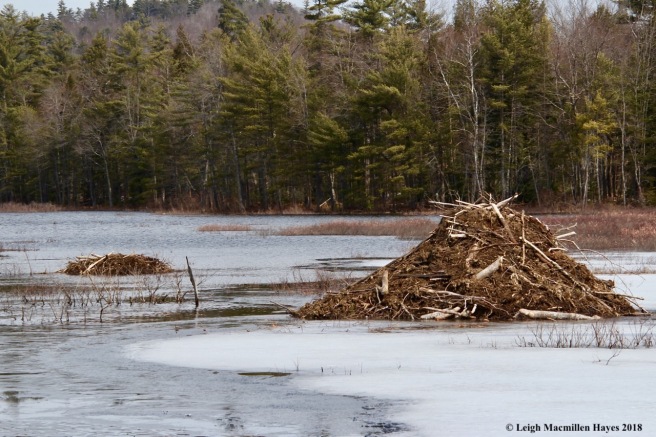 And a lodge stood tall still partially surrounded by ice. 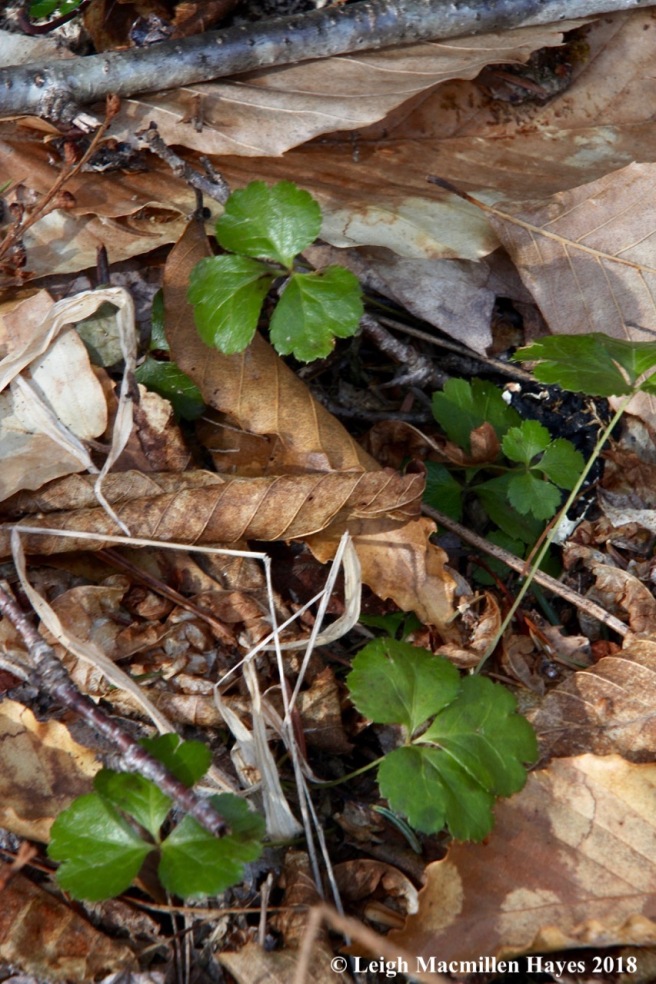 But there was more of  the woods to see this day, like goldthread’s evergreen leaves that reminded me of cilantro. And also of Tom’s garden, for which he actually has some seedlings that will be ready to plant in another month and its produce will be enjoyed at a later date by those he loved most. Their dinners will be enriched for one last season by his green thumb.

Next, I spied a tiny, fragile shell that was iridescent on the inside and brown on the outside. It couldn’t be a bird egg. Was it from a snail?  Tom would have known.

And then there was a striped maple leaf like none I’ve ever seen before–almost stained-glass in its offering. It only made sense that it be so hol(e)y for in its life cycle it had provided energy to insects and as it continues to break down it will nourish the earth. Tom would recognize the significance of such–renewal, rather than devastation. 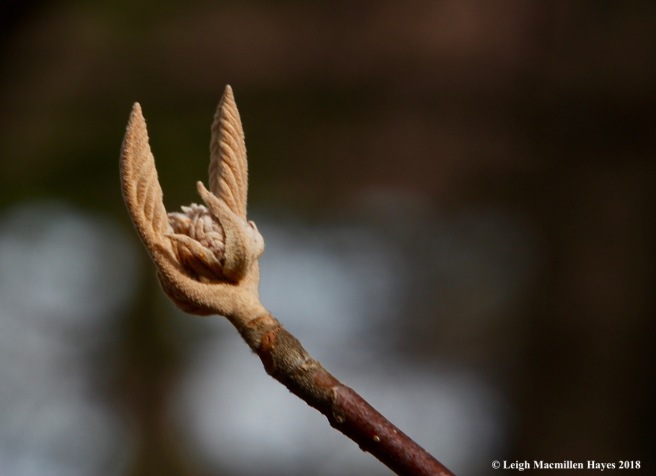 There were other things to note, including a hobblebush flower bud that formed between its praying hand leaf buds.

And lungwort that served as an indicator of a rich, healthy ecosystem. Indeed.

I stood for a long time by the water’s edge, thinking of Tom and then I spied it. A Great Blue Heron flew in and landed across the way. My intention was honored. And Tom’s.

At last I headed back the way I had come and passed through a field where a couple of apple trees grow. As I’d journeyed I had noted scat after scat–some filled with apple chunks and seeds. Of course, I rejoiced because I have an affinity for scat.

But Tom, too, would have rejoiced for what he set out to do so many years ago was to create wildlife corridors–those links of joined natural habitat. For Tom, that’s what it’s all been about–maintaining the ecological processes that allow mammals of all kinds to move and continue to be viable. And for the land on which they traveled to also be viable.

His has been a kinship with all forms of life beginning with the minute, like his shiitake mushrooms and the earth within his gardens and ending with . . . there is no ending, only new beginnings. May Tom’s next beginning be through the eyes of a Golden Eagle. As he soars above us, may he approve of the continued good works of others who try to emulate the legacy he will leave behind.

Godspeed Tom. And thank you.

7 thoughts on “Kinship With All Forms of Life”