It was a sad week. It was a happy week. Both, of course, are understatements. But that’s how life is. And so today, four days after Tom Henderson, the executive director of the Greater Lovell Land Trust, passed from his human form to that of an otter, his partner Teresa and I escaped to the woods.

Like Tom, I want to be reincarnated as an otter, for they seem to have the most fun. 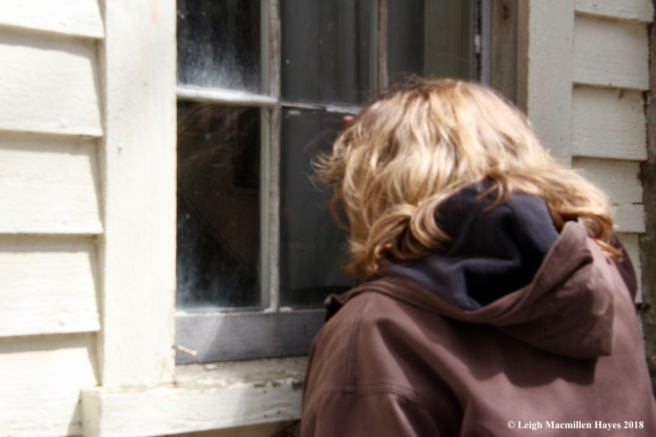 And fun it was as Teresa and I parked near the Leach Link Trail and walked down Stone House Road for I was afraid we’d get stuck in the mud and snow. OK, so I like to have fun, but getting stuck wasn’t high on my list of “this is a blast” must dos. Maybe it’s my advanced age. 😉

Actually though, I was glad for the opportunity to walk the road, because I knew what I wanted to show Teresa. But, she discovered a few other things worth looking at first. Curiosity was the name of our game and nothing would go unexamined–much like an otter would move through the landscape.  And so, at the old camp that rarely seems to see much use, we peered through the windows. 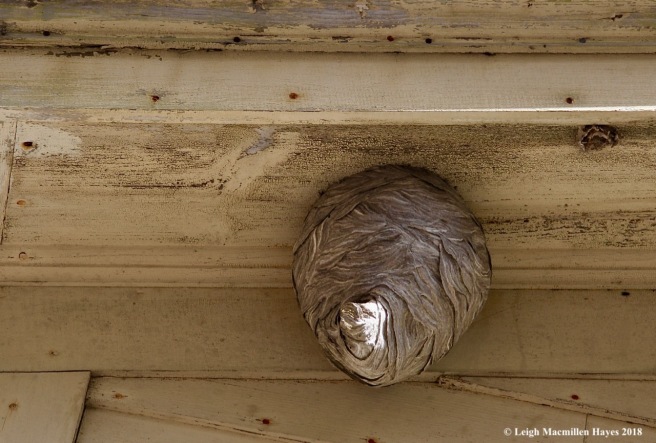 And up to the eaves where another home showed its facade.

As we continued on, we played telephone. Remember that game where you sat or stood in a line and passed a message along and by the time it reached the last person, the message was totally changed and somehow quite humorous? Well, the rules were a wee bit changed today and our telephone was more like tag. In black bear tradition. All along the road, we stopped to check the poles for signs left behind like the upside down 1.

Scratches and bite marks marred the poles in a way that made our hearts beat with wonder.

And that hair, oh my! Who needs lions and tigers? 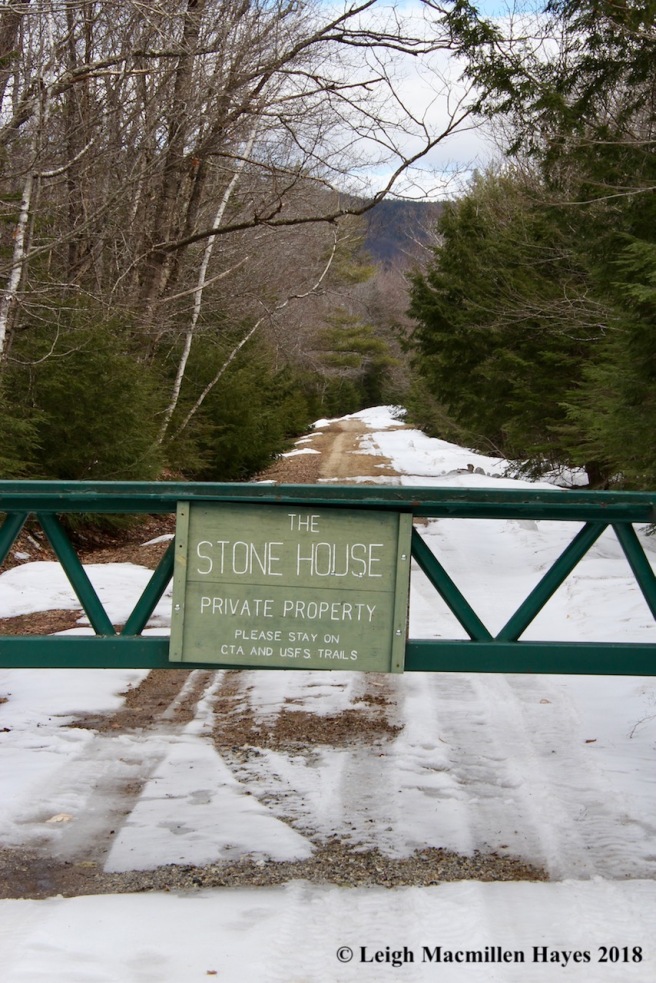 At last we reached the gate . . . and walked around it. Six hundred acres of the Stone House property is under conservation easement with the Greater Lovell Land Trust thanks to the foresight of the owners and guidance of Tom.

Onto the airfield we walked and then turned around for the view was as commanding as usual. To our right, the Stone House, built over a hundred years ago with granite quarried on the grounds. In front of us, the mountains of Evans Notch, including the Bald Faces and the Basin Rim. And immediately before us, the military airstrip built in the 1940s for training exercises during WWII.

Onward we continued until we reached Rattlesnake Brook and the old orchard. 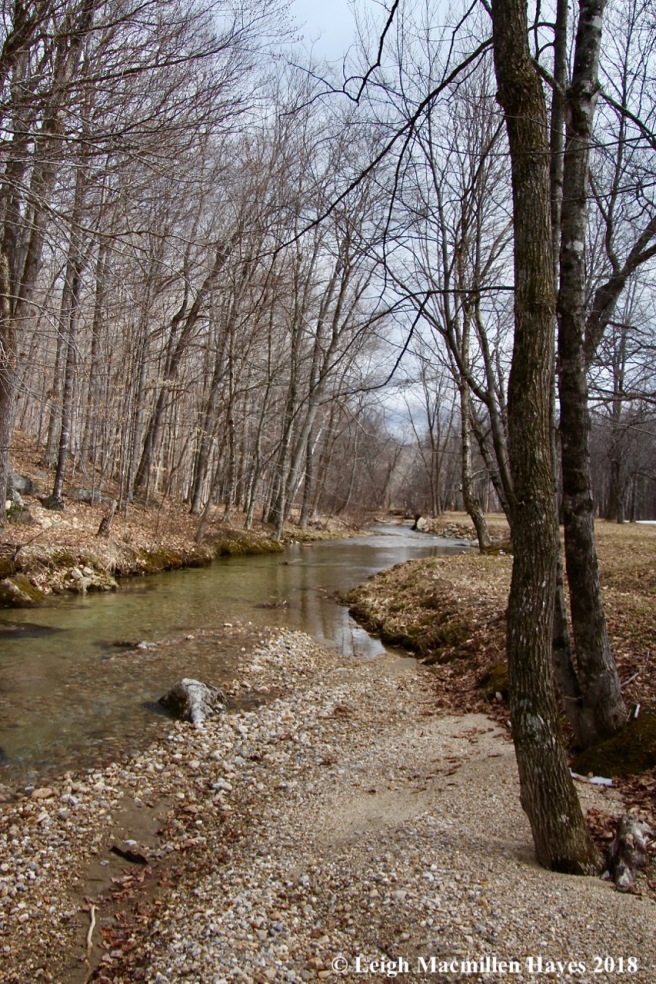 The water soothed our souls.

And then a spot of color caught Teresa’s eye. Coltsfoot, a perennial that resembles dandelions, and is the first flower to appear in spring.

Tom would have known this, but I never trust my own information about foraging–Coltsfoot can be tossed in a salad to add an aromatic flavor, blended with honey to remedy a cough, or dried and chopped up, then mixed into pancake batter. But . . . don’t take my word for it. Tom was the chef. My best culinary creation–popcorn.

False Hellebore or Indian Poke was our next spring ephemeral. I’ve always been drawn to its ribbed leaves, but today noticed something different–the stiff-haired growth that embraced it. Rhizomes? I’m not sure.

As we walked, we paid constant attention to our foot placement for the young plants were everywhere and we knew other plants were also just emerging. And so we tiptoed. 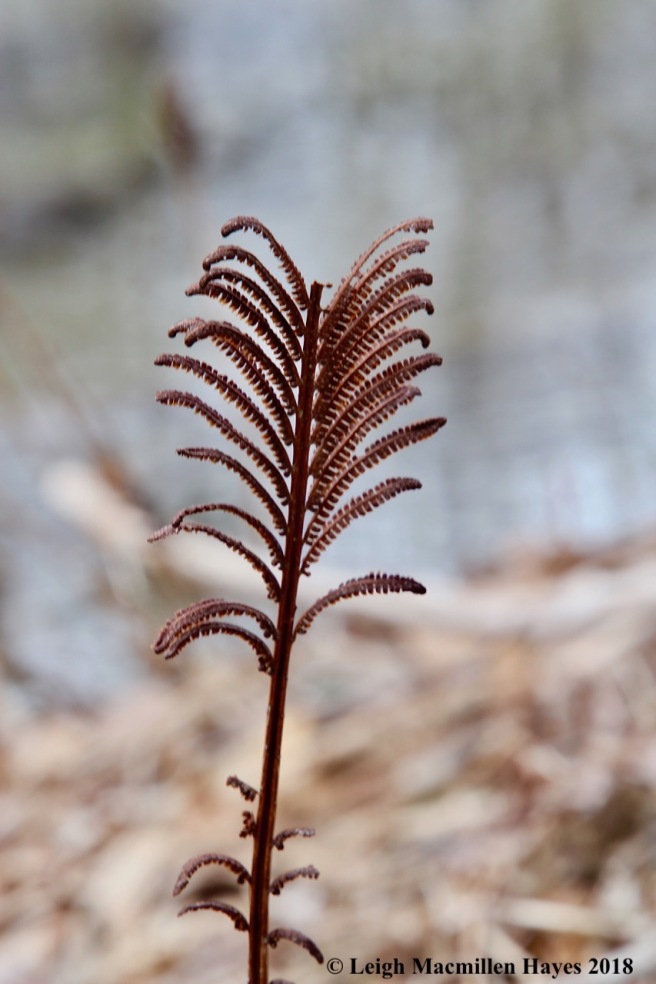 And beaver works that suggested a visitor in the fall of 2017.

As drawn as our eyes were to the plants at our feet, reflections in the water and life in general graced our afternoon.

We noted the cliffs above where Peregrine Falcons nest.

Continuing on, another stream spoke to us–its water murmuring our thoughts . . .

and mirroring our memories.

A wee bit further, we stepped down toward Shell Pond and enjoyed the view offered.

Including a lodge inhabited by local residents. 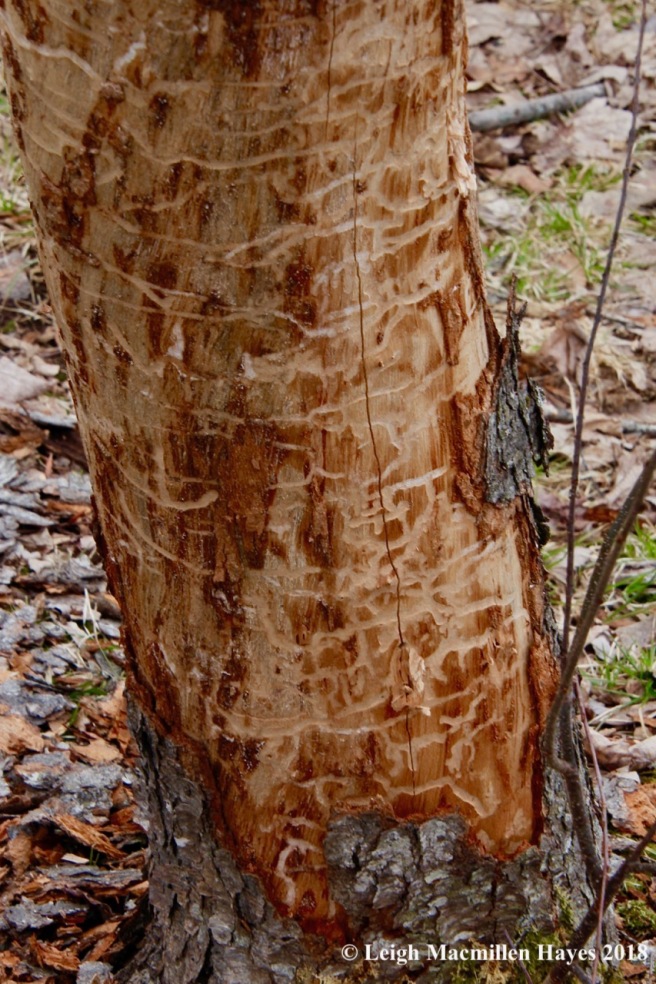 On the way back we were stopped in our tracks by a cherry tree almost totally debarked by a bark beetle.

We both knew beaver and porcupine trees and had seen the hieroglyphics left by bark beetles before, but never had we seen such fresh work. Black cherry bark is often described as burnt potato chips and as Teresa noted, all had spilled out of the bag and lay on the ground.

Our adventure ended at the fork in the road. When you come upon it, don’t take it 😉 But do pause.

Pausing was the name of our game today as we traversed five miles together and shared Tom moments while channeling our inner otter. Thank you, Teresa, for tramping with me. I can’t wait to do so again.

P.S. And with that, I’m proud to say, “It’s a boy!” I’m a great aunt again–to Baby Gormley who was born yesterday morning. May he develop a sense of wonder about the natural world and follow his inner otter.

4 thoughts on “Tramping with Teresa”