We were a bit confused by the clue–something about an oven and ice and we felt like maybe we were headed to a kitchen. My guy doesn’t cook all that much and I avoid it as much as possible, so we knew this was going to be a tough leg of the race. Surely, we’d be there all night trying to concoct something and the sky would darken on our chance of winning.

To top it all off, it was an equalizer. That meant that though we were early to the starting point, all participants would begin at the same time. And so we had some time on our hands and a few dollars to spend on lunch and libations.

As we sipped, our clue was revealed. And we were ready to heed it, despite our anxiety over the cooking issue.

Following lunch, we still had more time to kill and decided to walk across the footbridge in Boothbay Harbor.

It was a bit of a ghost harbor on this day, but it won’t be long and people and boats and more people will fill this space.

As we walked around town, we did some window shopping–of the best sort. 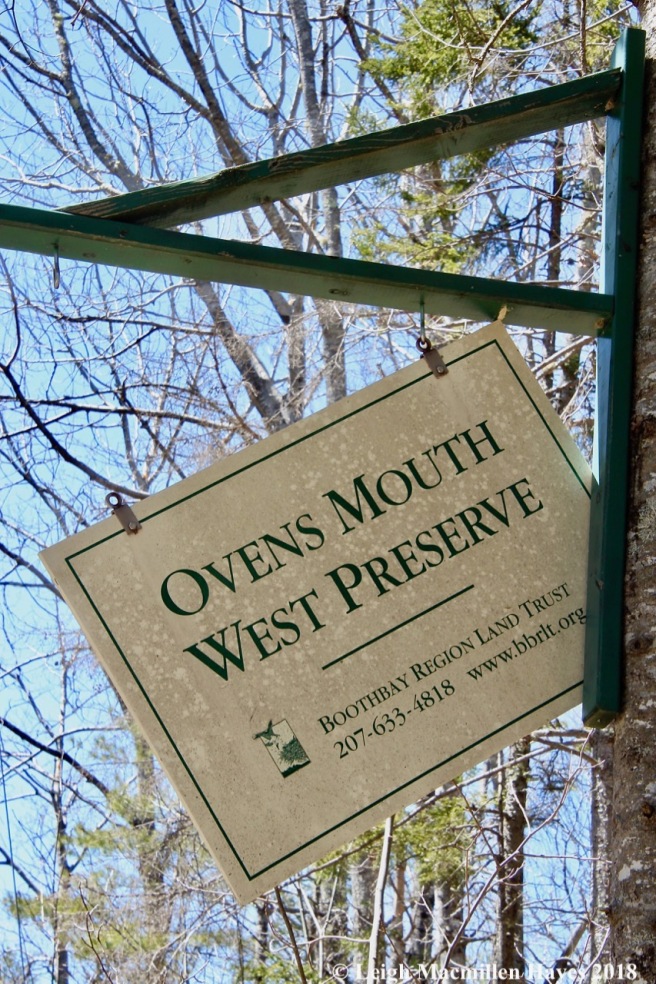 Look for the crooked sign, the clue stated. We found it. 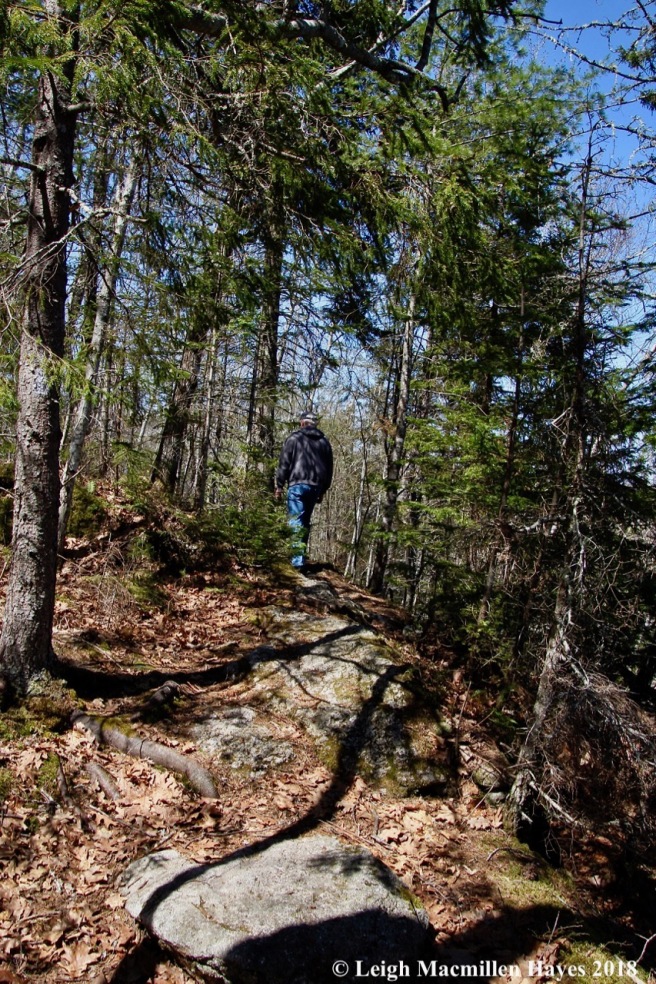 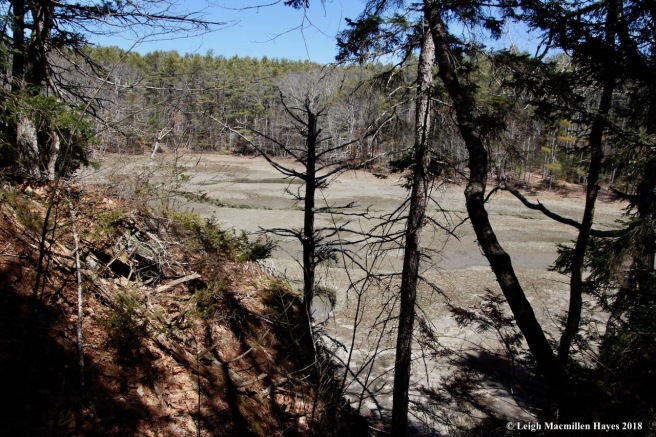 Note the tide. It was obviously out. 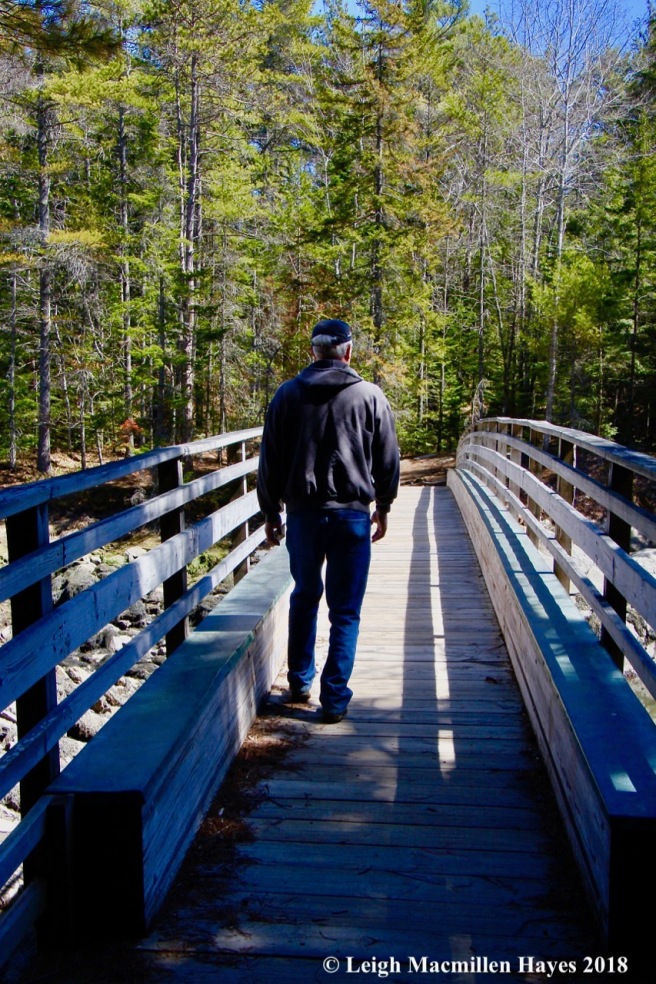 But what was below us, we wondered. And that was our next challenge. We had to figure out the configuration of this land. It looked like an old bridge, but rather, it was a former dam that had been used to create an ice pond on the other side of the bridge upon which we stood. Aha–the icy portion of this leg of the race. Our task was to discover its history. Reading a brochure produced by the Boothbay Region Land Trust we learned the following: “In 1880, in response to a growing demand for ice, [the cove now known as Ice House Cove] was dammed to form a fresh-water pond and an ice house was built. The ice was shipped by schooner, mainly to Boston and New York.” Today, any blocks of ice would surely have melted as happened in our water bottles. 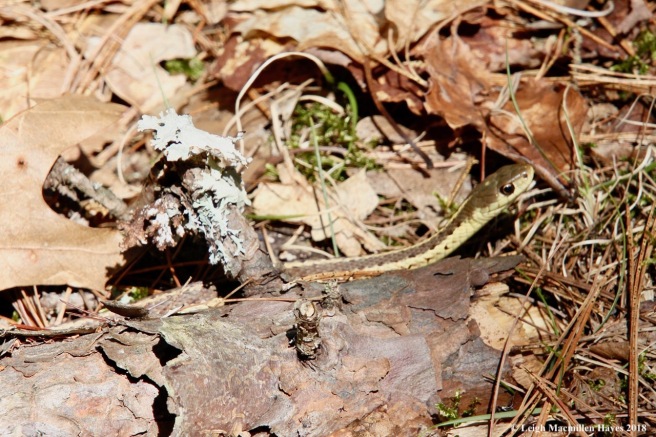 While we looped around the two peninsulas we had a several other challenges to complete. First, we needed to find three examples of critter sign–other than the ubiquitous red squirrel middens. We checked off number one with a garter snake that slithered past.

Number two: mammal tracks in the mud below. We couldn’t get close enough to identify it, but noted the trotting pattern. 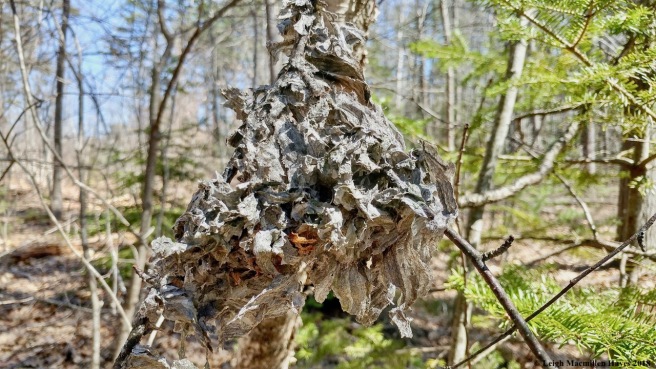 And number three, the remnants of a paper wasp nest.

Another challenge down. How many more to go?

It wasn’t long before the next presented itself as we wound our way around the property. First, we needed to find evidence of the land’s former use–as a sheep pasture in the 19th century. 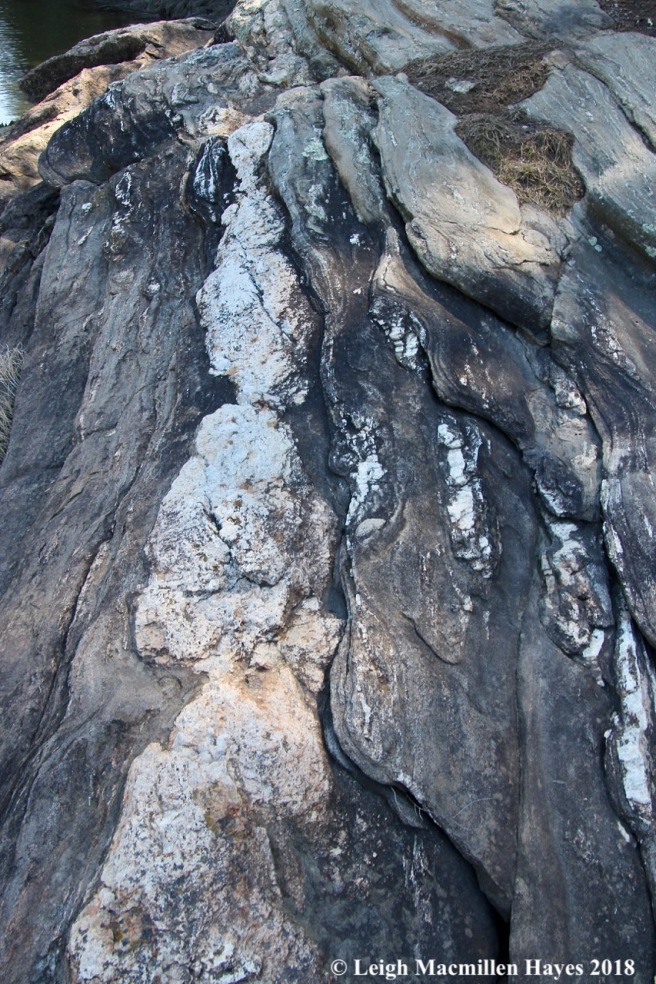 And finally, a sausage-shaped boudin among the folds, formed by the pinching and swelling from compression and shearing.

The tide slowly flowed in as we journeyed on.

And at the point where the Cross River met the Back River, we noted a rip current visible in the swirls.

At last we crossed back over the bridge from east to west and then peeked at the dam juxtaposed as it was in the shadow of the modern-day bridge.

From the outermost point of the west side, we paused to look back toward the dam and bridge–did the early explorers really see this rounded cove as the inside of an oven, thus naming it Ovens Mouth? It was certainly unique. Fortunately, we could enjoy the view without turning up the heat. If they thought it was an oven, we agreed. If it meant we didn’t have to cook, we definitely agreed.

From the brochure, we did learn more history: “This area has always been inviting for maritime activities because of its deep-water access and protected location. Settled in the mid-1700s, one of the region’s earliest shipyards was located here and both British and American vessels hid in the coves during the Revolution. Soon after the Civil War, the property came into the hands of the Tibbets-Welsh family, who owned it for more than a hundred years.”

We had one last challenge to complete before finding our way to the mat. Our final mission: to note three sights that represented our relationship. 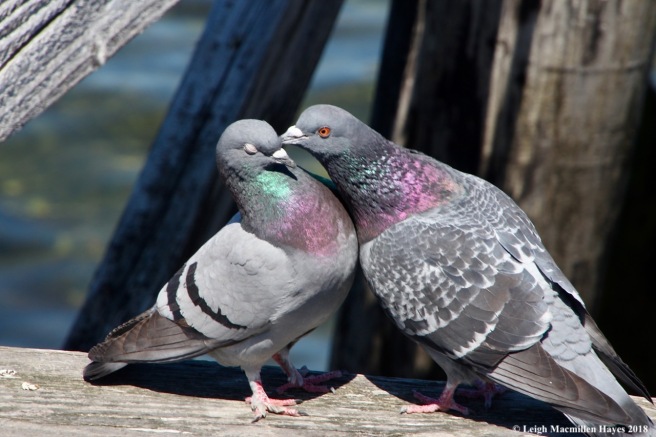 Whispering sweet nothings–check. (Note the heart-shaped white cere on their bills. And no, he is not picking her nits. Well, even if he is, isn’t that a loving move?)

Once again, we managed to stay ahead of other contestants, didn’t squabble too much, avoided our worst fears and completed the assigned tasks without much stress. In the third episode of our imaginary rendition of The Amazing Race–Our Style, we landed on the mat in first place once again. What’s next? Stay tuned.