The hour and a half drive to Litchfield, Maine, was worth every second on this fifth day of May. The spring tapestry that spread before my eyes had me oohing and aahing around each bend in the road for such were the colors–so many shades of greens, mixed in with reds and magentas and pinks and yellows. It was almost intoxicating.

But . . . a photograph will have to wait for another day for I needed to reach my destination and catch up with my peeps–fellow classmates from our 2012-13 Maine Master Naturalist class. For the last five years we’ve tried to get together quarterly. It doesn’t always work out, but this year we’re making a concerted effort.

Today’s destination was the vernal pool at Smithfield Plantation, a 103-acre property the town of Litchfield conserved. If you look carefully, you might see a reflection of Sharon, who has lead many a school group along the trails and knows the property intimately.

Before we headed to the pool, she oriented us to the site.

One of the things Sharon explained was that a Boy Scout had created an interpretive tree trail and so we paused at one of his stops to admire the craftsmanship.

Indeed, right behind the sign, a striped maple, aka moose maple, shared its newly emerged pastel buds and leaves.

And then we lifted the lid to reveal the information. OK, so there were a few typos for the grammar police, but on each of his cards, he included a joke. What a great idea as that would certainly appeal to the younger set. It definitely appealed to those of us who are still ten years old in our minds.

And on the opposite side of the trail, we spotted another type of moose wood–hobblebush just beginning to flower. Both striped maple and hobblebush are favorite foods of moose, thus their nicknames.

Onward we walked until a patch of leaves stopped us. And our brain-sharing began. We thought we knew what the plant was, but then questioned ourselves as it wasn’t in flower yet. Each season, we need to relearn some. Despite the lack of flowers, we decided to key it out in Newcomb’s Wildflower Guide using two other descriptors–leaves both basal and entire.

For those familiar with Newcomb’s that meant of the three numbers in the locator key, we didn’t know the first, but went with 22 for the second and third representing basal leaves and entire leaves. Then we tried, 122, 222, etc. 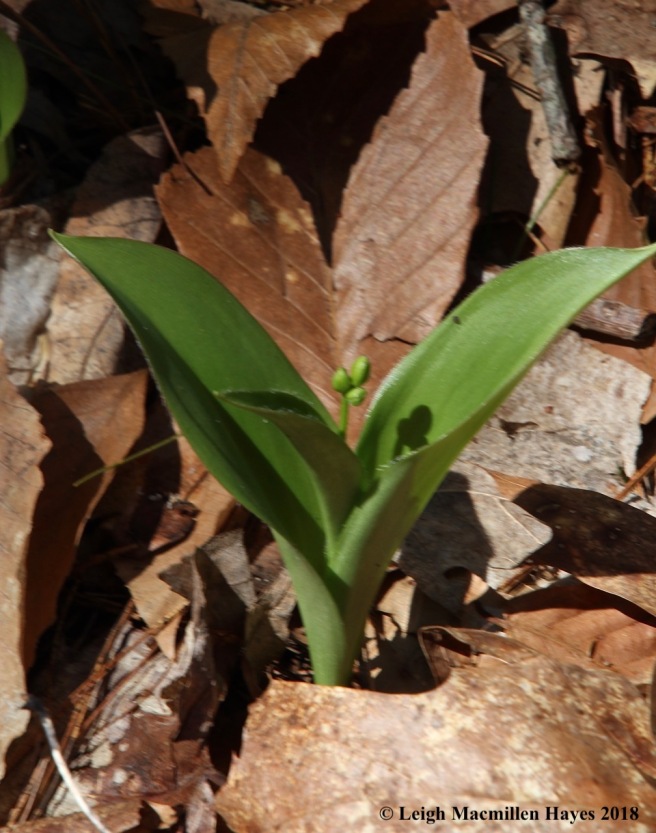 And landed on our first suspicion: 622–Yellow Clintonia or Bluebead (Clintonia borealis).

The trail wasn’t long, but as one might expect, it took us a while to reach the vernal pool. And then we were stopped in our tracks and didn’t approach it right away.

Instead, we stood back and spent a while watching a solitary sandpiper on a downed tree.

As we watched, it bobbed its tail. And at one point we were sure it took a mid-morning nap. Eventually, the bird flew to another part of the pool and a few minutes later departed. 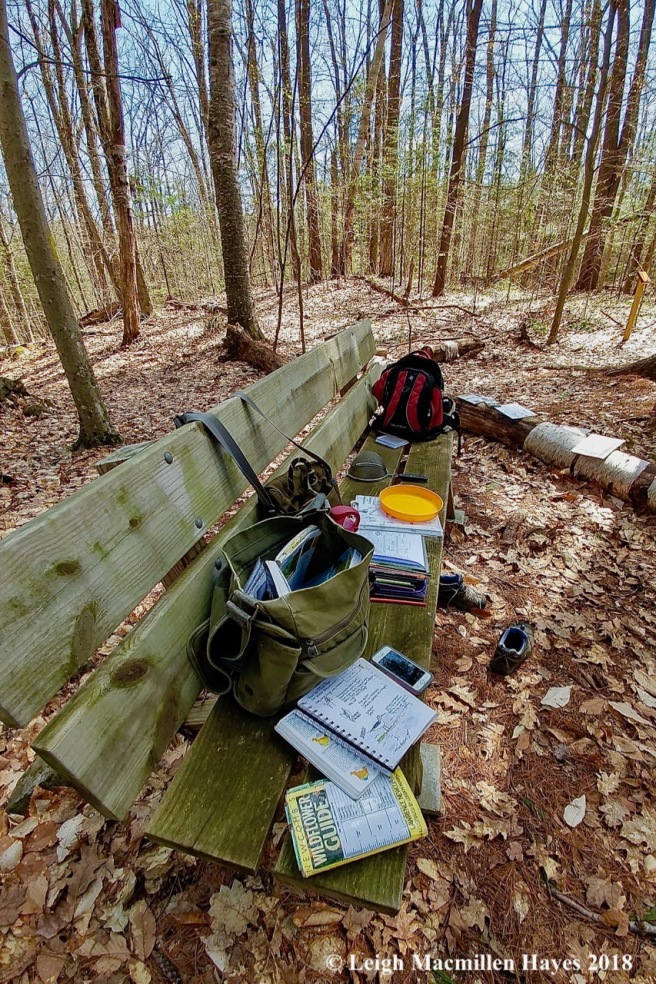 And so we set up camp, dropping some of our gear on the bench. 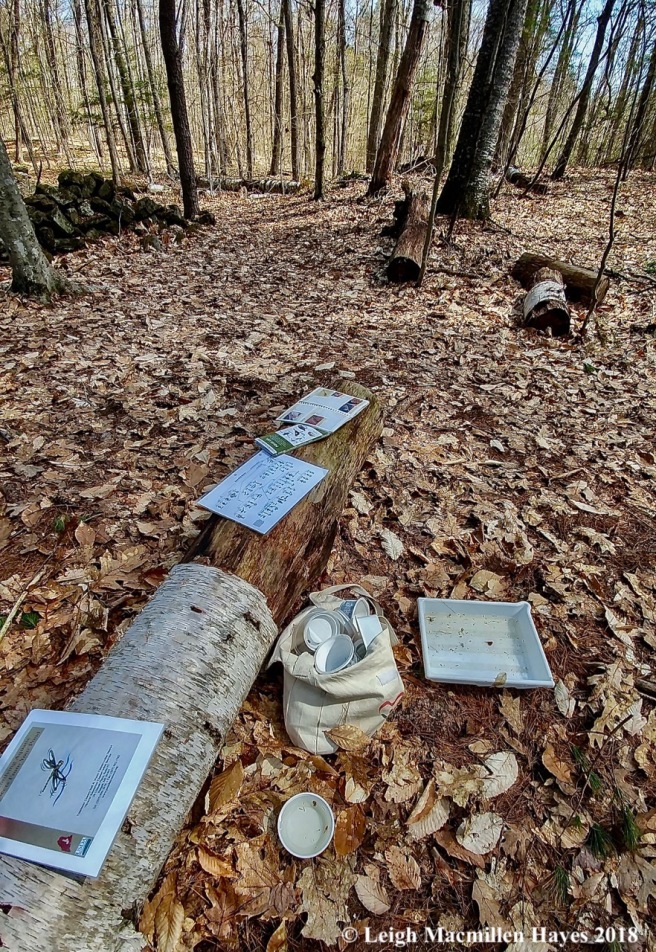 And more of it on and beside a log. We had macro-invertebrate charts and vernal pool pamphlets and books, plus all kinds of containers for pond dipping.

Pam was the smart one and she’d packed her sketch book and colored pencils. That’s one skill we all appreciate for it slows us down and makes us really notice. I, for one, haven’t done enough sketching in the past year and so this was the perfect incentive for the future.

As we looked into the pool and Sharon told us what we might find, we immediately noticed the most abundant residents–mosquito larvae doing their whirligig dances.

But on her first dip, Sharon pulled up the crème de la crème–a fairy shrimp. Bingo–a significant pool it was as she knew, though not so documented with the state.

With her loupe, Jen took a closer look.

On Sharon’s next dip she pulled up not uno, not dos, not tres, not quatro, but cinco fairy shrimp.

And so Pam settled in to sketch them in all their glory.

And added a caddisfly larva for we’d also captured one of those.

One of the cool things that Sharon pointed out, the brood pouch at the end of the abdomen, so indicating a female. How cool is that?

And here is our caddisfly, his casing created out of fallen hemlock needles. Caddisfly larvae that create their bodies from woody material are the log-cabin variety. We watched it move about in the tray, sometimes extending its soft body out of the case.

The dipping continued and a spotted salamander egg mass was pulled out, but only for us to take a closer look. And then it was returned from whence it came. Notice the individual eggs within the greater gelatinous matrix.

After that, Sharon found another reason to celebrate. She’d worn her waders and so was able to go deeper into the water than the rest of us.

A quick dip and she’d pulled up an egg mass that almost melted as life burst forth–tadpoles. The first of the season for all of us.

One last dip revealed one not so kind to all the other species we’d located. Known as a water tiger or toe biter, you can tell that it’s one mean little thing. This was the larval stage of a predacious diving beetle and the tadpoles had everything to fear for like its adult form it was a predator. 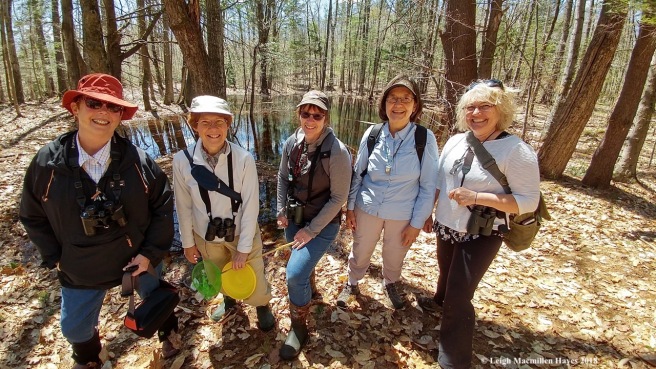 After that last find, it was time for us to pack up our gear and leave the pool behind. But, we took with us memories of a delightful spring morning spent exploring together. And . . . we had a chance to catch up, show each other field guides we thought might be of interest, share experiences of our volunteer opportunities, provide suggestions for ways to make a nature program work be it for kids or adults, and realize that we were not alone in any obstacles that may cause an issue during those programs.