I’m not sure how it happened, but when we arrived at Route 113 in Fryeburg to pick up our clue we realized we were the first contestants for this episode of The Amazing Race–Our Style.

Consequently, we had a quick decision to make–the main clue referred to the Baldfaces and we recognized the fact that that entailed a challenging climb. Though my cast has morphed into a smelly splint [envision sliced cast up one side and then add two wide strips of velcro], I was relieved that we could take advantage of the Fast Forward clue that mentioned shingles in a white forest. 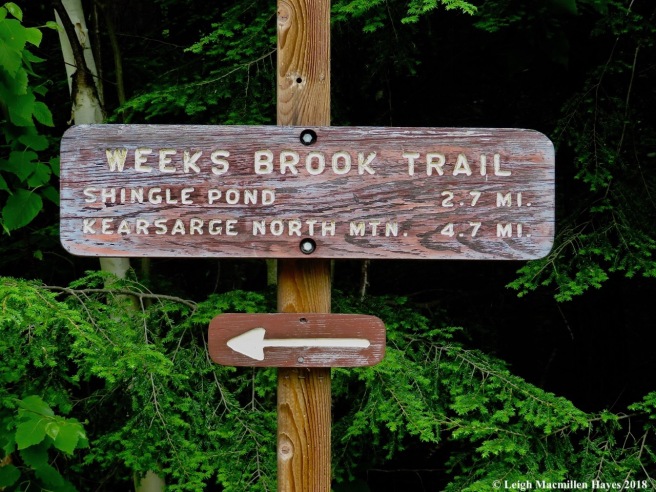 We checked the map and located a trailhead for Shingle Pond only a few miles away. BINGO. 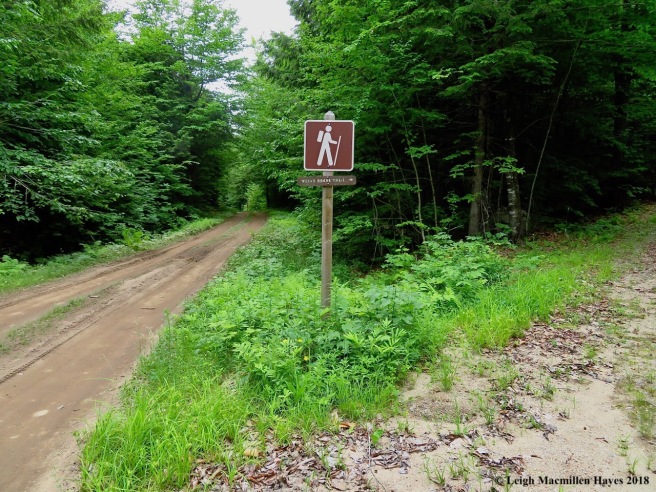 The trail begins along Forest Road 317, but a few curves later heads into the nitty gritty of the White Mountain National Forest. 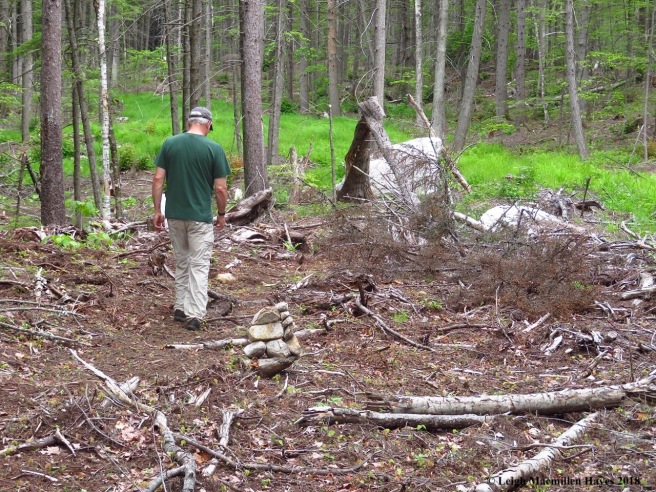 Toward the beginning we could hear the buzz of logging machinery in the distance, but it wasn’t all that loud and certainly didn’t drown out the not-so-sweet buzzing of the local mosquitoes. Our first real challenge, for one can hardly count those flying buzzers and stingers as an obstacle, but more a way of life, came in the form of staying on the trail. It was blazed yellow, but occasionally we had to slow ourselves and our minds, and look around for some clues. There was only one cairn, which was fine with us, but after that spot we spent several minutes of valuable time looking for yellow in every direction . . . to no avail. Finally, however, my eyes cued in on what appeared to be a worn path between some trees to our right and my guy passed through some muck and logging slash to discover that indeed we had found it. That happened more than once, but each time we paused, scouted and eventually made the right decision. They didn’t promise us easy when we signed on for our own version of the reality show. 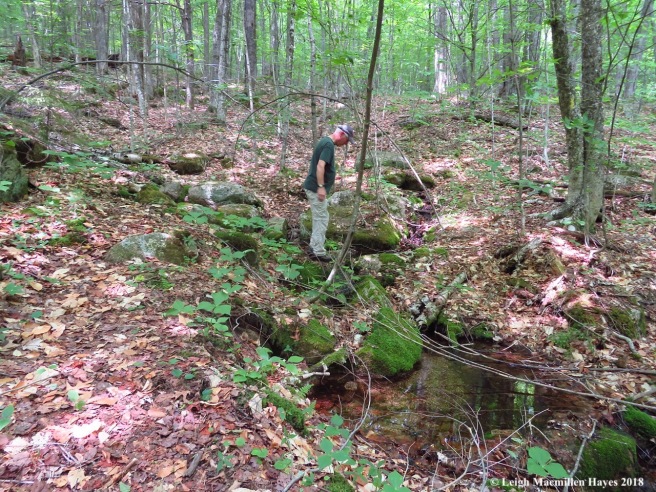 The path took us across Weeks Brook for which the trail had been named and it was there that we noted a trillion trilliums–all past their prime. 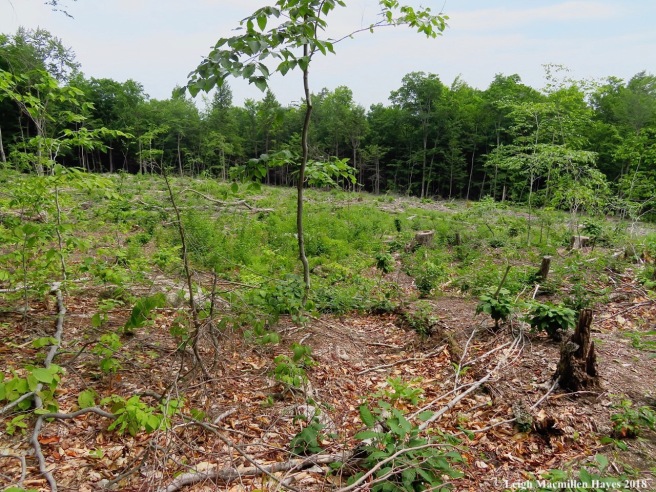 Through hemlock groves and mixed forests we hiked, occasionally passing by patches of clearcuts. Our next challenge was to determine the benefits of such habitat. The answer seemed obvious for so much was the bird song–from those I recognized like Ovenbirds, Veerys, and Hermit Thrushes to warblers that we could hear but not see. If we hadn’t been racing against the clock it would have been fun to try to figure out some of the song makers. 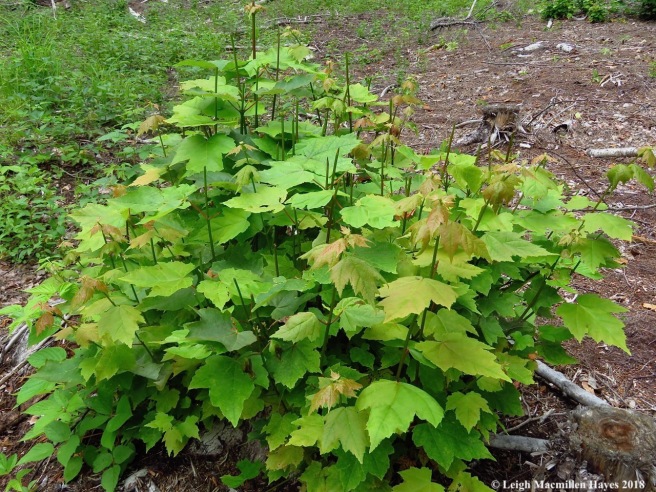 We also noted plenty of signs, such as browsed tree buds, that told us moose and deer had foraged in those areas. 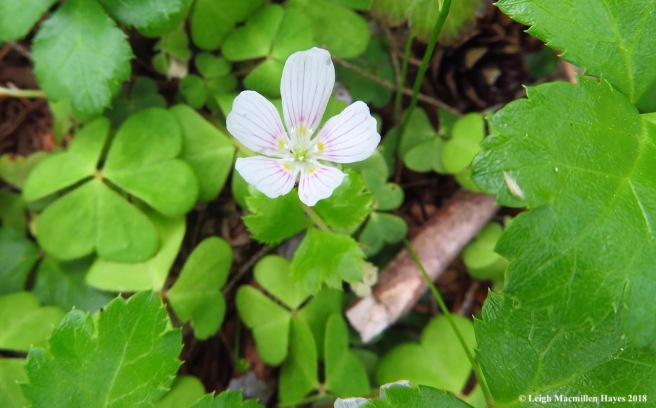 Challenge number 3 required that we locate a few plants and note whether they were edible or not. Wood Sorrel was easy–and most welcome on this sultry day for its a thirst quencher. 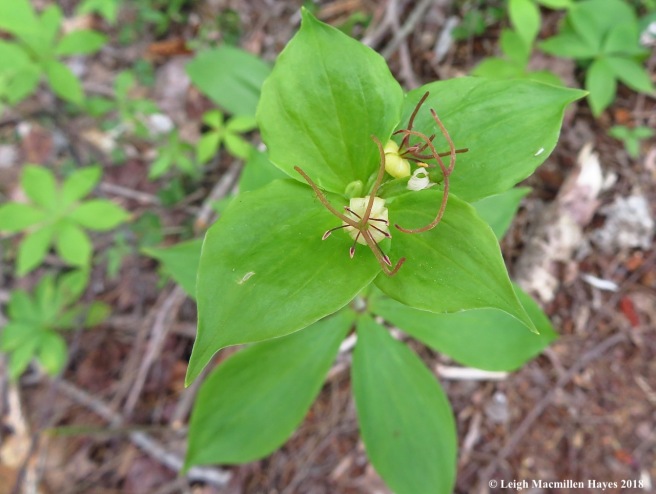 Indian Cucumber Root was another enticing edible and it grew abundantly in the forest. As pleasing as the flower is above its second tier, it’s not their fruits that appealed to us, but rather the small white rhizomes buried in the ground which offered a cool and crisp cucumbery taste. Even my guy can attest to that. 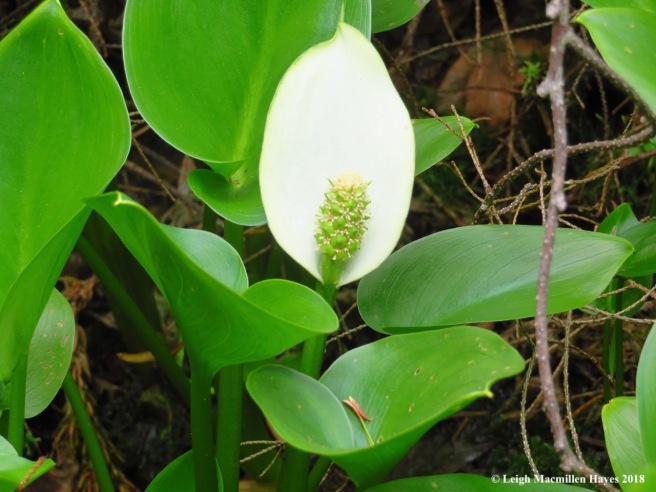 The one herb we didn’t taste test was the Wild Calla or Bog Arum. It’s known to cause severe irritation of the mouth and throat if consumed. We left it be. 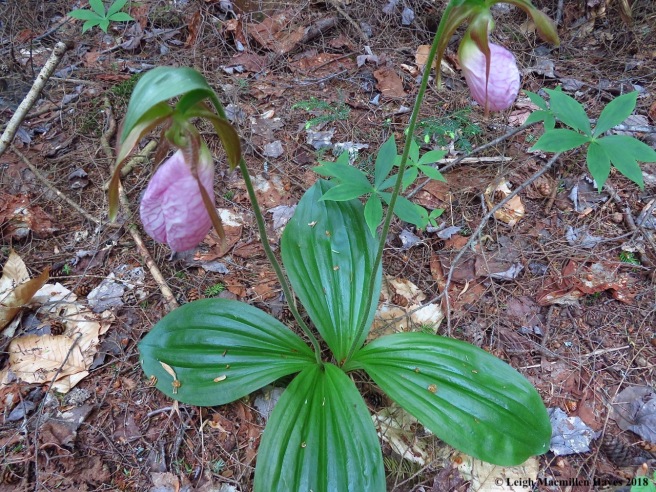 We did find one other plant that we wouldn’t think of eating, but always revere–Pink Lady’s Slippers, in this case a matching pair. 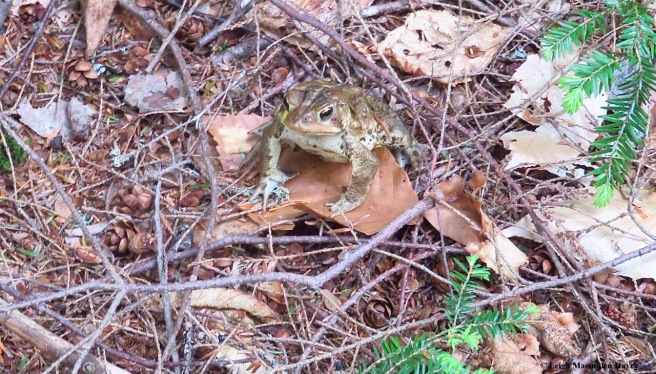 And not far beyond–Prince Charming himself. Even his eyes were surrounded by a ring of gold. 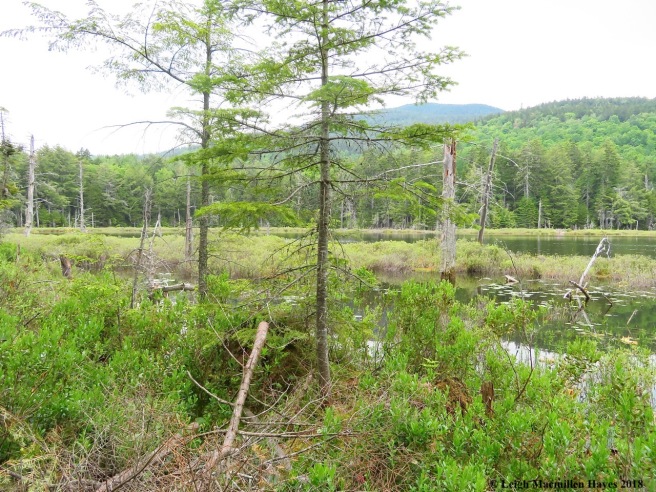 At last we reached the two-acre Shingle Pond. Though we wanted to be greeted by a moose in the water, we were pleased with all that we saw and heard, including bull, green and tree frogs. 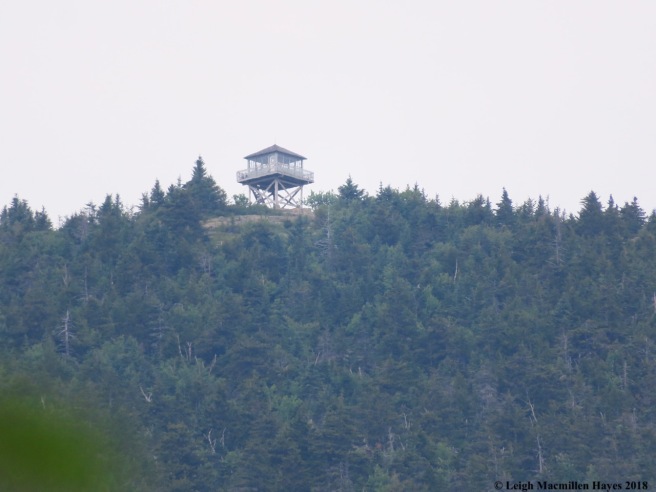 Though we were two miles and lots of ledges below the summit of Kearsarge North, as we ate our PB&J sandwiches created by my guy, the sight of the historic fire tower evoked lots of memories and got us dreaming about our next opportunity to sign the guest notebook. 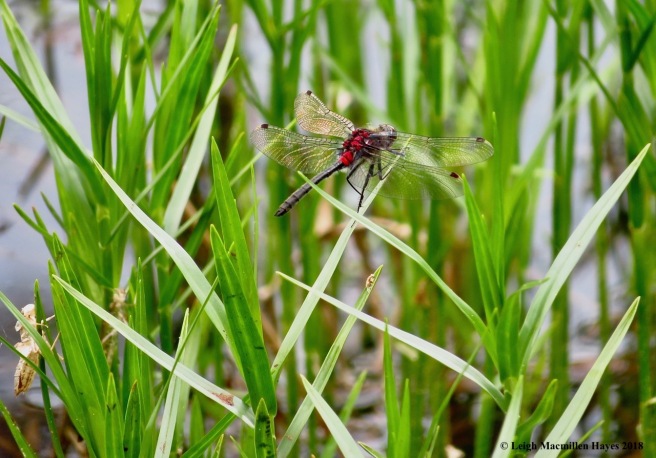 Our task at the pond was to bushwhack around its perimeter and note some of the species who called this mountain pond home. Probably my favorite discovery was the Crimson-ringed Whiteface Dragonfly. 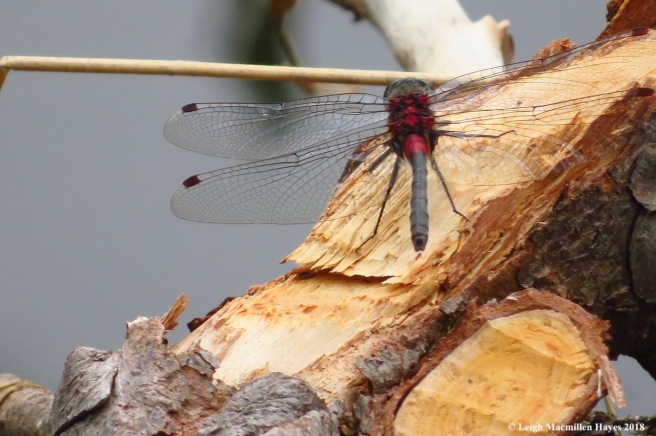 Over and over again we saw it, that bright red body standing out in contrast to its dark abdomen. There were a zillion dragonflies, many of them darners and clubtails zooming about, but this skimmer had the decency to perch frequently and reveal its finer details. 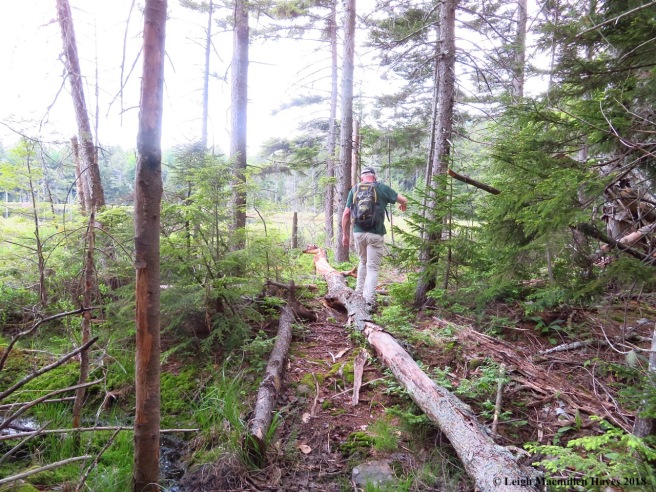 As we moved around the pond, we met trees to climb over, under and around. 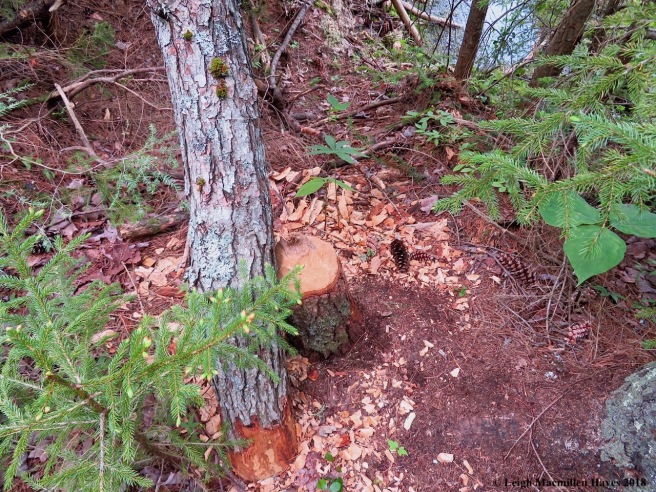 Many were felled by the resident beavers, so we had another who made its home there to add to the list. 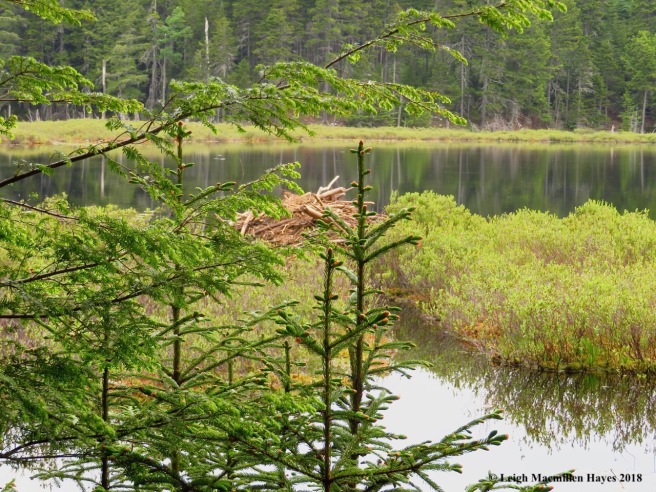 In fact, we found the most recently built beaver abode. 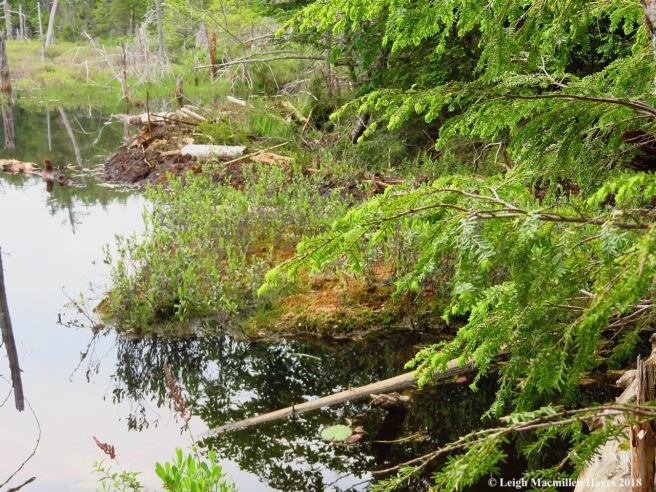 And the dam that made it all possible. 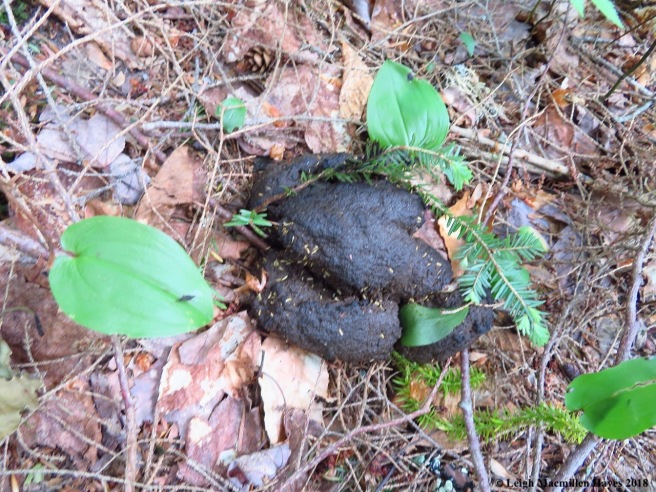 One special sign of wildlife may gross you out, but we were delighted for this pile of scat indicated a bear had passed by earlier this spring. I’d wanted to look for bear trees on the hike up, but these days my eyes are mighty focused on trail conditions. And scat is just as good, if not better than a tree with old claw marks. Well–both are wonderful . . . really. 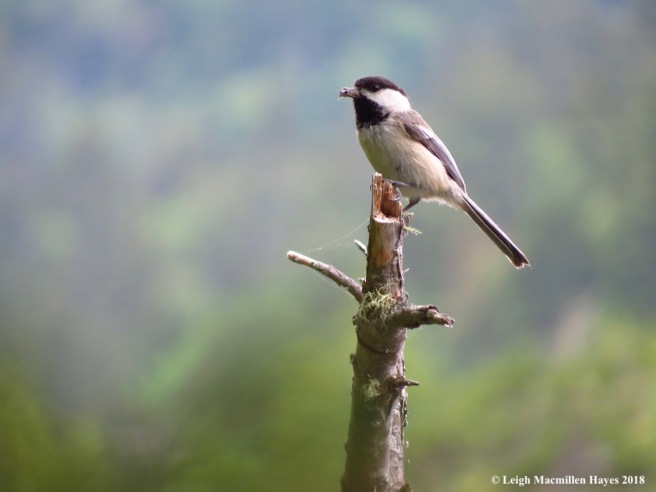 One other resident was insistent that we take notice and I think we may have paused near a nest tree. When I asked my guy if he could hear the Conway Scenic Train whistle emanating from the other side of the mountains, he said that all he could hear was the chickadee’s chatter. 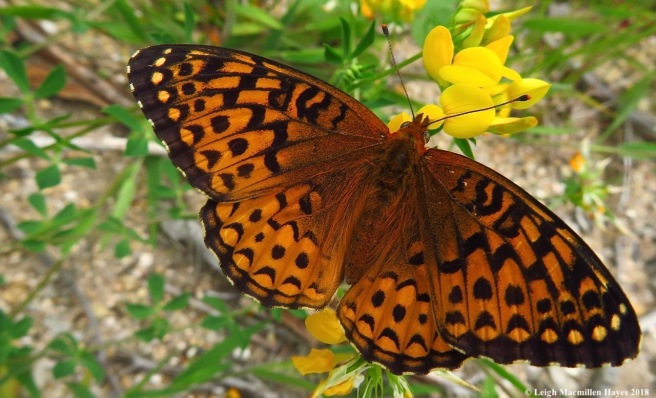 The return hike down was via the same trail, but when we reached the log landing and later the logging road we had one final challenge to complete–the flutter-by challenge. Who were those beauties that flitted about, gracing the landscape with their presence? For starters, we discovered several Atlantis Fritillaries seeking nectar from eggs and bacon flowers, aka Bird’s-foot-trefoil. 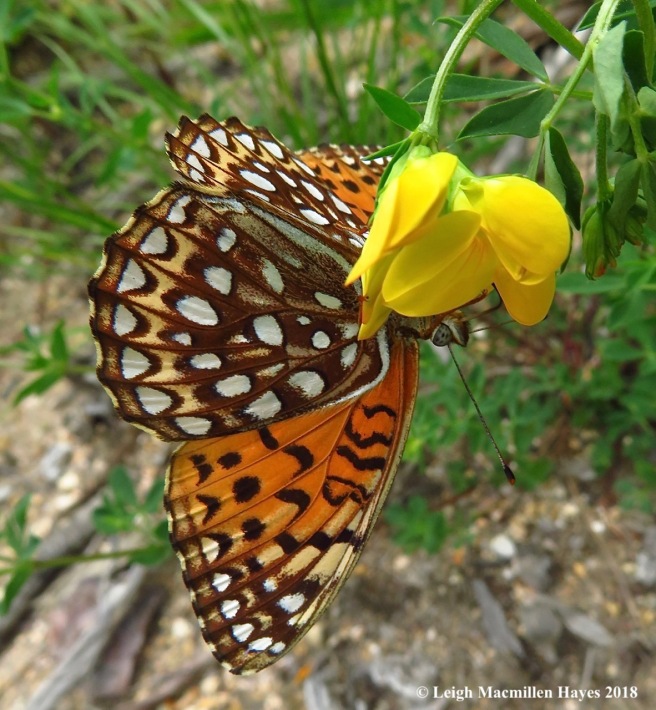 Once over easy, it was equally beautiful. 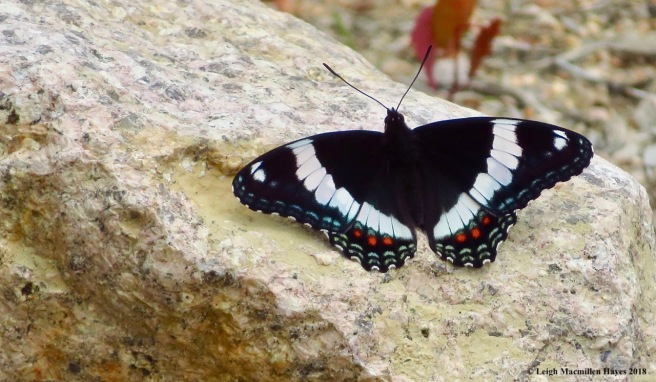 And the learning continued for we watched numerous White Admirals flit from spot to spot. But notice the coloration–including orange spots below its white bars. 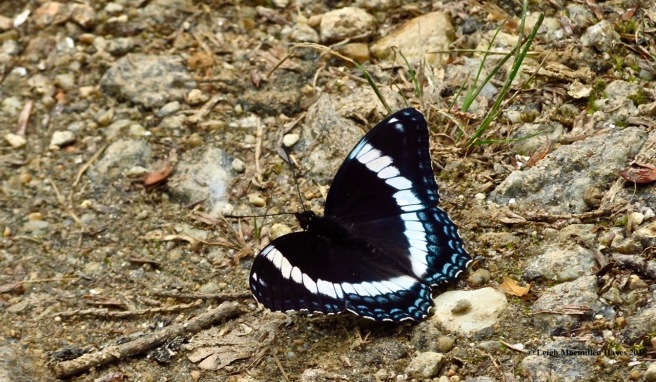 This blue version was also a White Admiral. Needless to say, we admired it no matter its variation.

And with that we had successfully completed the fifth episode of The Amazing Race–Our Style. All day we didn’t know our status in comparison to the other contestants, but six miles and four hours later we had nothing to fear. We definitely won this leg for we stood upon the mat at the Pit Stop much earlier than any of the other contestants.

As much as we would have liked to climb the Baldface Circle, it wasn’t in the cards for us today.  And as a final note to today’s journey–I added a few more mosquitoes to the natural history museum forming on the velcro of my splint. It’s a museum, however, that I hope will close soon, for it stinks–literally and figuratively.