The minute I stepped out of the truck, a loud, rather unharmonious musical performance, greeted me at Deer Hill Bog in Stow, Maine. Rather than the Peeper and Wood Frog chorus of spring, the summer symphony was performed by Bullfrogs and Green Frogs, but mainly the former.

It was about nine a.m. when I caught my first glimpse of the bog, a result of man and nature working together. An old wood dam combined with a beaver dam created the 25-acre body of shallow water. From moose and Great Blue Herons to aquatic plants and tiny organisms, over 90 species call the bog home. Though I truly expected to spy a moose, that opportunity was not meant to be. I did go, however, because of the Great Blue Herons. Friend JoAnne reminded me the other day of the old rookery, so I decided to check on it.

But first, I made my way toward the wildlife viewing blind. 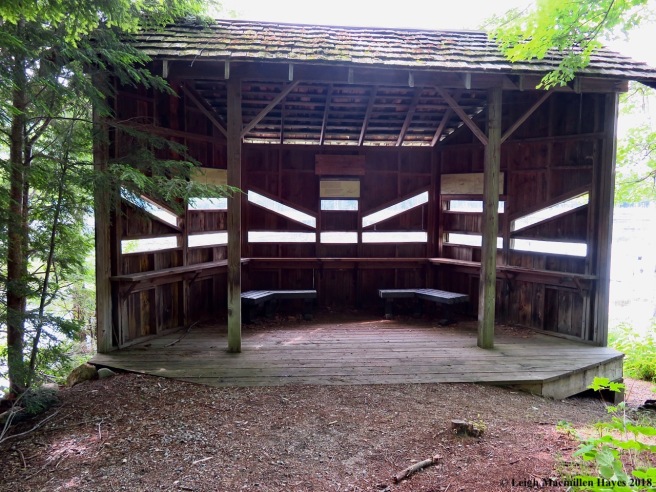 It was built in 1993 by the Maine Conservation Corp and is maintained by the White Mountain National Forest. Two more panels described some species of wildlife one might expect to see.

of life in the bog.

But, I’m not very good about staying undercover, and so around to the side and front of the blind I went. And stood as still as possible, for the Bullfrogs quieted upon my approach, as I expected they would. A few minutes later they again sang, “rumm . . . rumm . . . rrrrrumm,” the notes all in bass.

The water practically boiled with small fish jumping, but my freshwater fish knowledge is limited and my best guess was that they were bait fish of some sort. 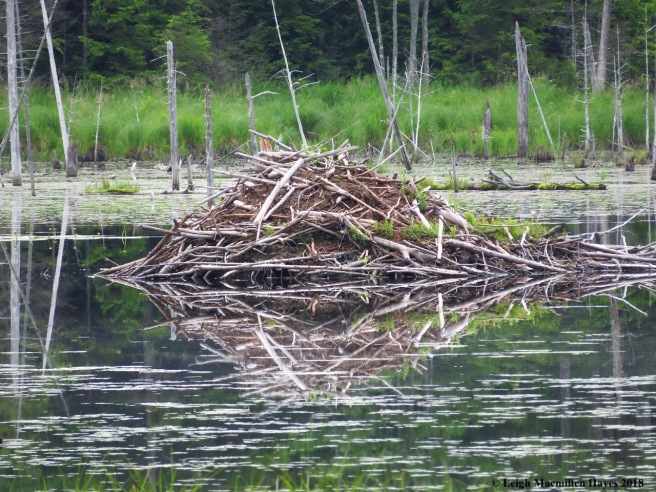 Looking around, I noted three beaver lodges, each of a different size. None looked active, but it was a warm summer morning and perhaps they were sleeping inside.

And then I spied two heron nests–on the first I saw only an adult who spent much time in preening mode.

The second nest I was sure was empty–until an adult flew in and three immatures squabbled for the food about to be regurgitated by the parent.

And back down to bog level, another Bullfrog doing what they seemed to do best–waiting patiently, with nary a rumm, though the sound seemed to travel in waves down the bog.

Frogs are ectothermic animals, which means they depend on the environment to maintain their body temperature, therefore many jumped onto fallen logs to catch a few rays. It may also have been that the height gave them a better view of the local action. 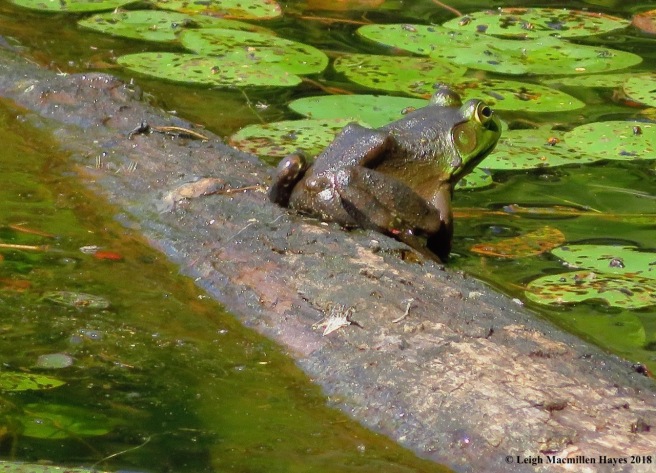 This one did eventually turn, making it a fine time to examine his body a bit. How did I know it was a male? His eardrums or tympanums, those circles located directly behind the eyes, were larger than the eyes. In females, they are about the same size. 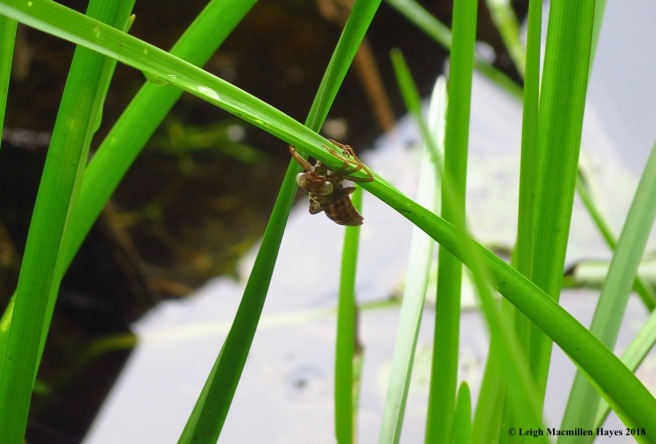 There were other things to look at, like the exuviae of a clubtail dragonfly. Notice how far apart the eyes were. Eye position is one key to determining species.

Other characteristics included the white face of the Frosted Whiteface. 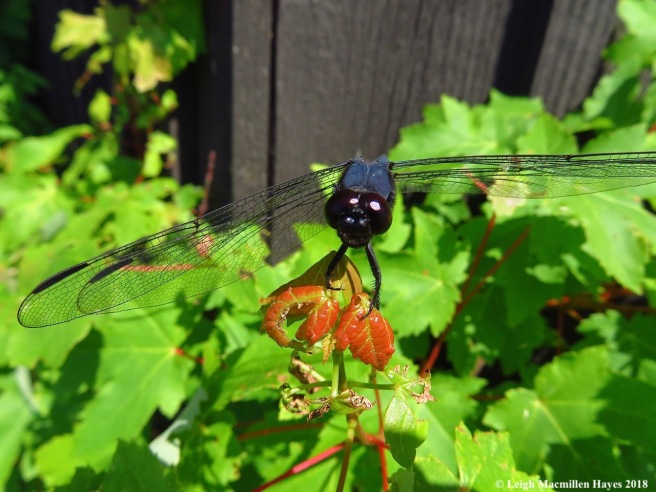 And the black face and brown eyes of a Slaty Skimmer.

The slaty part of its name came from the fact that male’s body is entirely blue–slate blue. 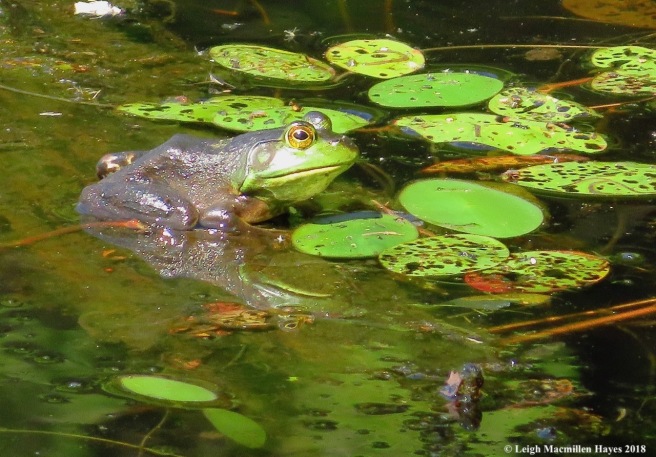 It seemed there were female frogs around, but they didn’t care about the males’ singing talents–at least not in my presence.

In the midst of it all, some canoodling by a pair of Frosted Whitefaced Dragonflies connected in their love formation. 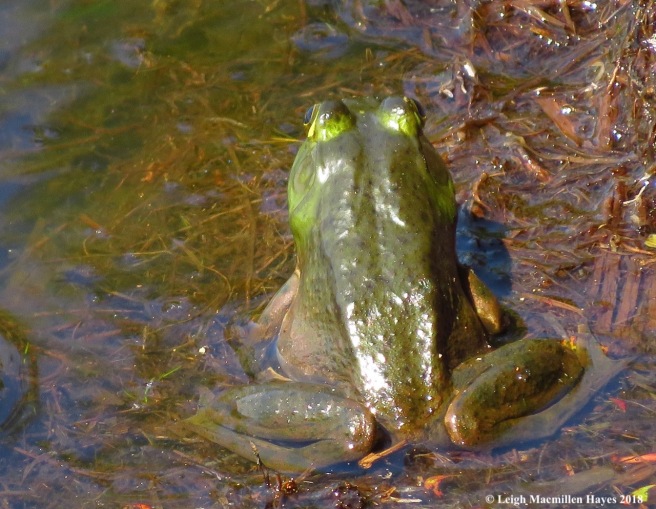 Plunking rubber bands to the beat of plunk-plunk-plunkplunkplunk were the Green Frogs. This one was so identified by the dorsalateral folds that ran from its eyes along the sides of its back and down toward its former tail.

Wood Ducks and Merganzers swam further away from my spot, but Grackles flitted in and out, up and down on the ground, fallen trees, and rocks, ever in search of fine dining. 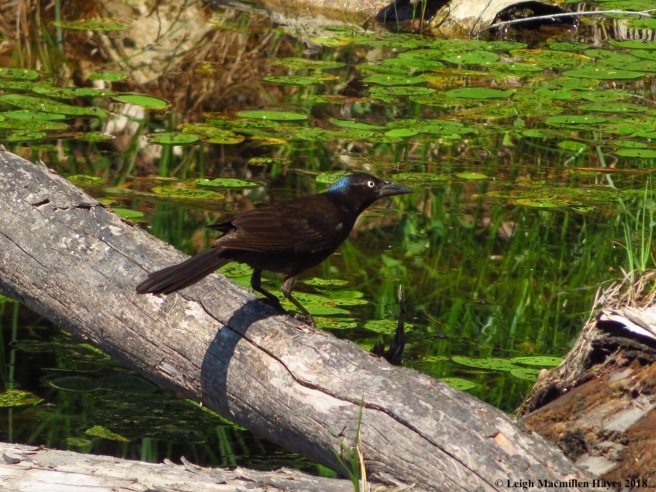 In between foraging for insects, crustaceans, mollusks, fish, and frogs, oh my, they sang their guttural song that was often followed by a high-pitched whistle.

There were also painted turtles to admire. Well, I only saw one, but suspect there were others.

It slipped into the water and then came up on a nearby log, another species that valued the sun’s warm rays. 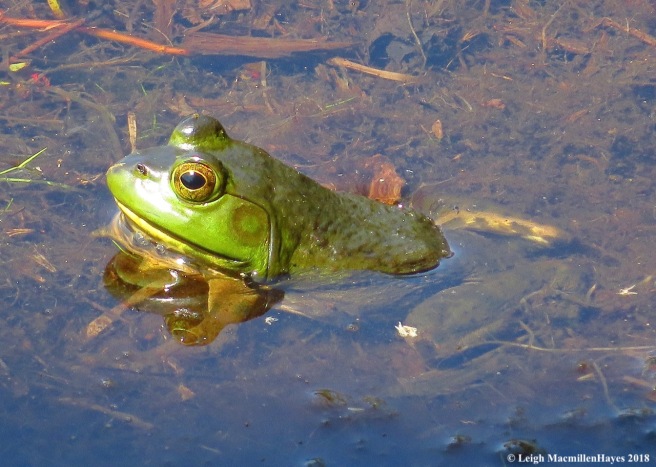 And another. Really, they were everywhere. Did you know that a frog’s pupils are horizontal so it can look forward, backward, and up and down. The better to see me,  dinner, and predators on the quick.

Sometimes frogs yelp, and it was such a sound that brought these two to my attention. Because of the sun’s position, I couldn’t get a clear take on their gender, but I watched them both jump onto the log simultaneously. At first they were side by side, but then one shifted further to the right. Had they been mating? Had one male tried to jump onto another thinking it was a female? Had something bigger than them been on the hunt?

I may never know why the frogs jumped, but this water snake was making the rounds. Every once in a while it made the water boil and I knew something was consumed. Can you see his forked tongue sticking out?

At last my bog time was drawing nigh, and yet there was so much more to see, including Round-leaved Sundews and Marsh St. Johnswort on log islands. 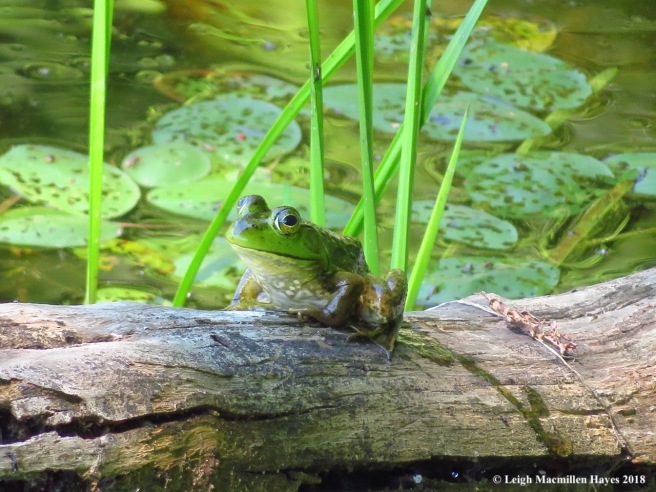 And one more Bullfrog to provide a last note to the morning’s wonder.

Though to some, the bog may look like a place of death, and death does happen there, it’s also full of life. It’s a place of biodiversity and hidden beauty. And this morning I was thankful to have it all to myself–the only human sounds I heard were of my own making. Deer Hill Bog–a magical, wonder-filled place to capture peace.

Maybe everyone needs a bog visit.

P.S.  The frog sounds were borrowed from https://srelherp.uga.edu/anurans/sounds as I’m not tech savvy enough to have recorded them. But do click on them, because it gives you a sense of this place. You’ll need to turn up the sound on your computer and possibly will need to press play when you click on the link.