We did celebrate Christmas in December as has long been the tradition, but for one of his presents my guy received a box with a photo and a set of oar locks. It made absolutely no sense to him. Why oar locks? And why a photo of a boat that needed some work and was sitting in someone’s barn. By now, you know where I’m going with this. As did he, once he gave it a moment’s thought.

The back story is that it was a selfish gift for we do have a fleet of boats already, including a 12-foot aluminum that has seen its own set of better days. The rest of our boats are man/woman-powered, from canoe and kayaks to sailfish and rowing shell. But a boat with a motor–other than the aluminum that has been a piece of yard art since our youngest went off to college so many years ago–had not been in our possession for three or four years. And even then, we only enjoyed it sporadically for it always seemed to have an engine issue of one sort or another. Finally, we sold it as is. And thankfully haven’t heard since if it isn’t.

But . . . our trips beyond the northern basin of Moose Pond had been more limited, and I like going for the occasional tour. So when our Wiser friends (Marita and Bob), said they were planning to sell their circa 1988 Maine Guide Boat last fall, I jumped on the opportunity and turned it into a Christmas present. First, however, they intended to sand and stain the woodwork and paint the interior. All the better for us, I figured. And I didn’t care when the job would be completed for it wasn’t like we’d be boating in January. 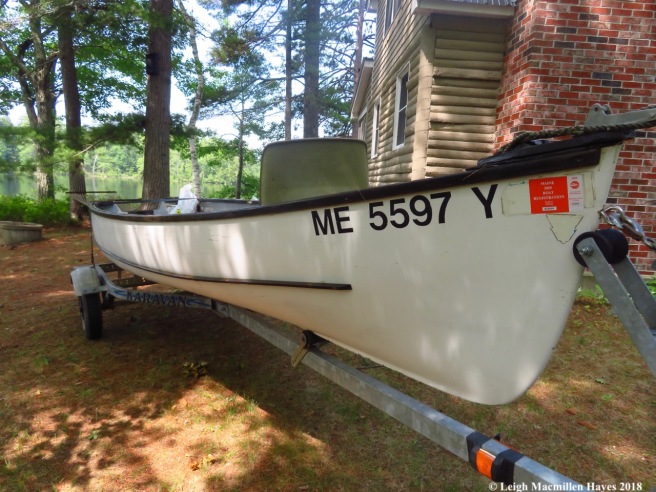 They kindly dropped the refurbished boat off last week and again it sat. Until today, when my guy had a chance to make a couple of minor adjustments, like adding the registration stickers and some epoxy to a couple of spots on the stern. 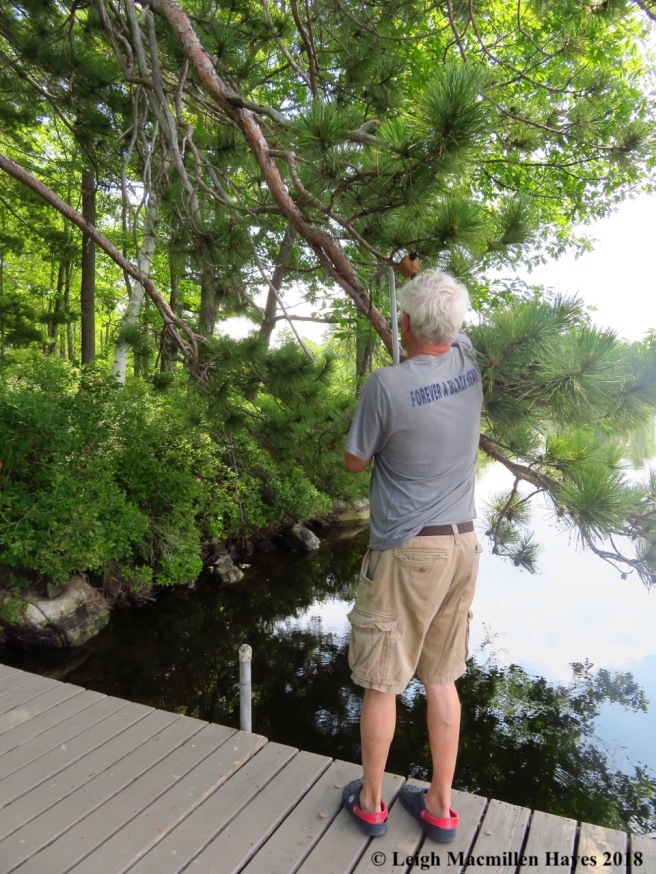 While the epoxy dried, there was a branch dangling over the side of the dock that needed to be trimmed. We love hiding behind the trees, and so haven’t done what most have–cut the bottom third of the branches off view-blocking trees. Even making this minor adjustment didn’t feel quite right, but we did need a place to dock the boat. And it wasn’t the first time we’d made such a cut in the same spot. I guess we were just surprised at how much the tree had grown since we last docked a boat there. 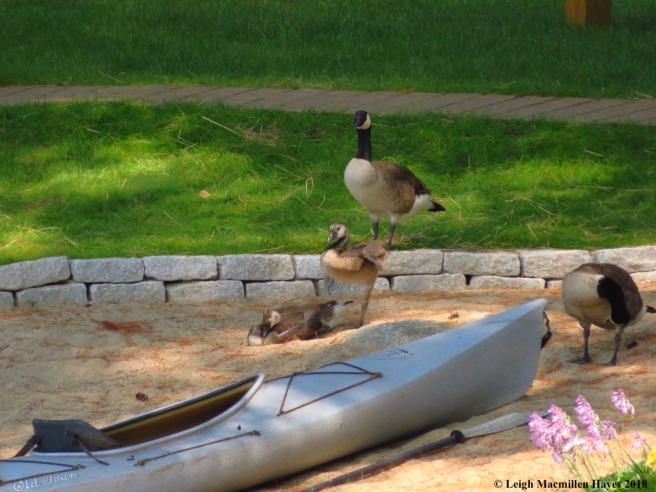 Of course, while he sawed the lower part of the branch off, I looked around and spied Canada geese visiting the neighbor’s well-groomed property. There were at least 25 geese in all, each leaving a multitude of gifts as thanks for the neighbor’s hospitality. 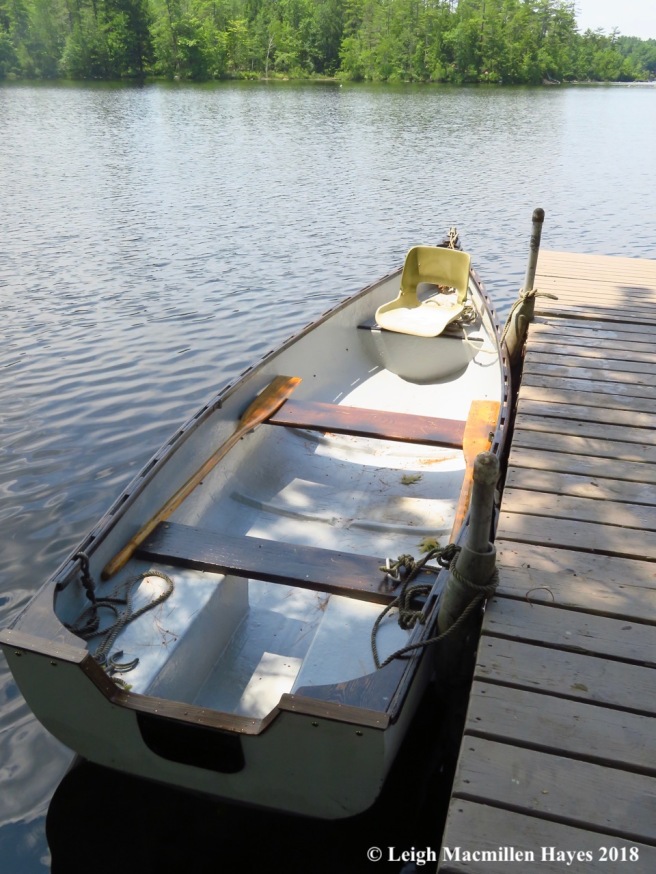 And then the boat was launched without much fanfare. 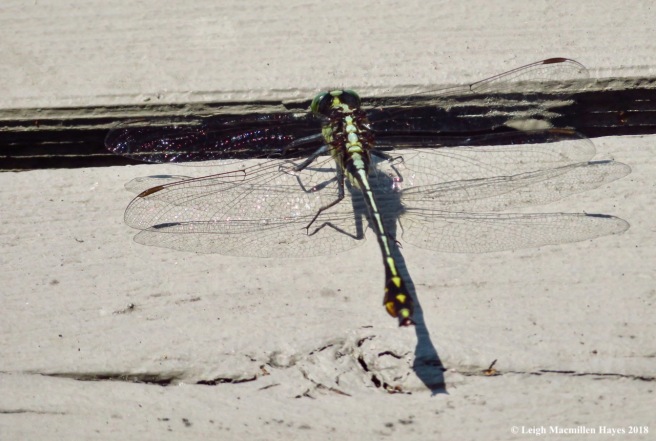 Unless you consider the fact that a Lancet Clubtail Dragonfly stopped by frequently to check on the happenings. 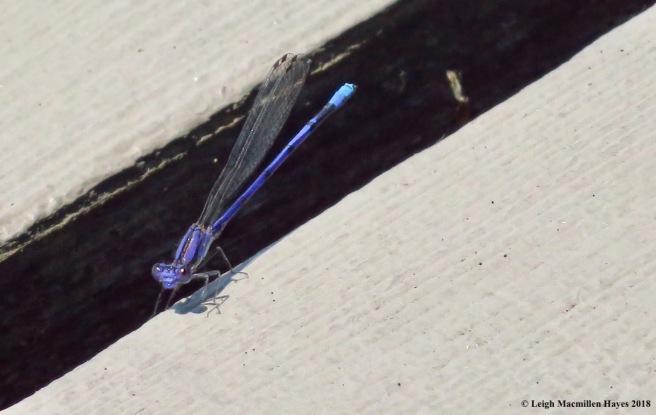 A Variable Dancer Damselfly also kept taking a look, and even checked out the boat’s seats. 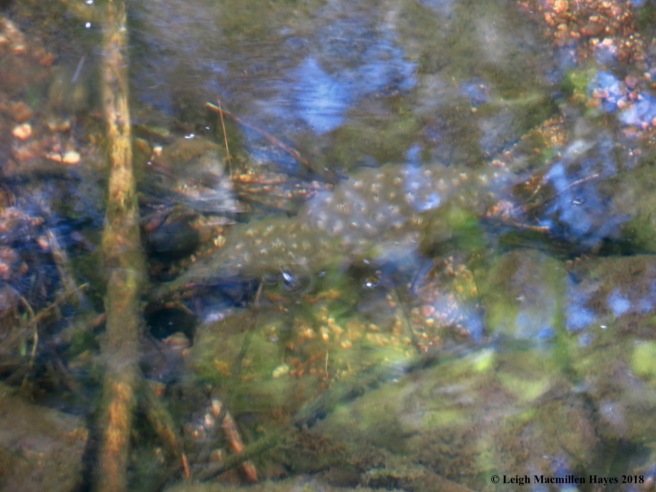 Meanwhile, as I was exclaiming over the clarity of the water, I noticed a Bryozoan mass, a most definite gift for the tiny colonial aquatic creatures that connect their tubes together and form the jelly-like blob, effectively filter particles from the water. The animals live in the tubes and extend their tentacles that capture even smaller microscopic organisms for food. The gelatinous species, also known as moss animals, is native to North America. 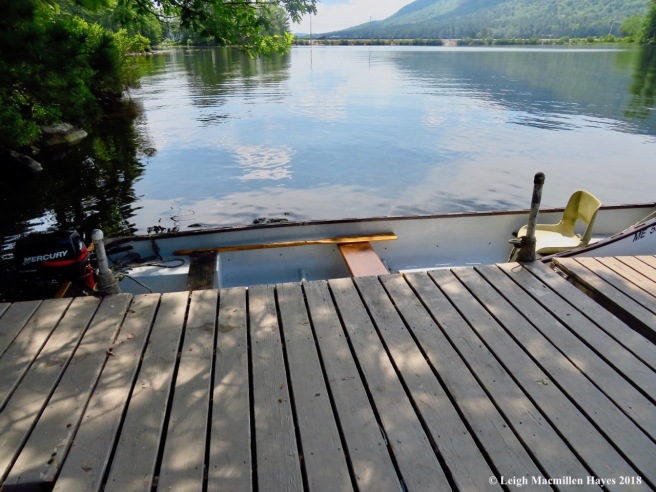 Ah, but it was a boat we were there to focus on and a four-stroke motor that’s been sitting dormant in the basement was attached to the stern. Fresh gas and a quick pull of the cord and we were in business. 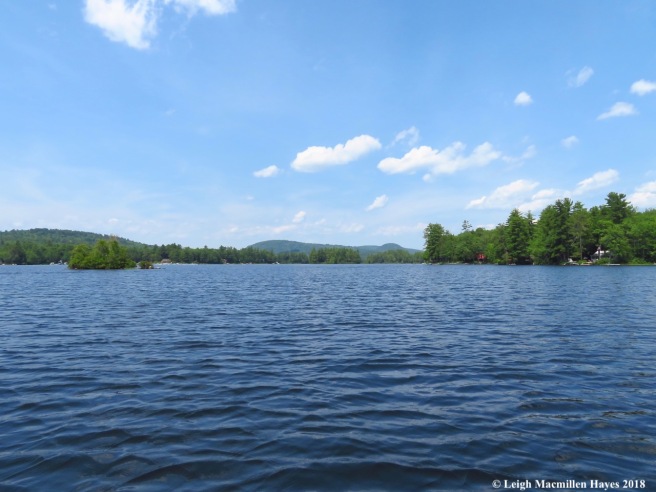 Off we headed onto our section of the pond. 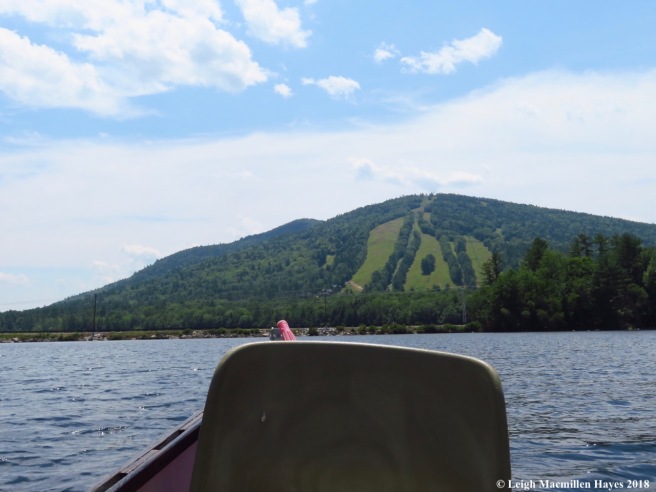 A turn to the left and the slopes of Shawnee Peak Ski Area at Pleasant Mountain appeared before us. 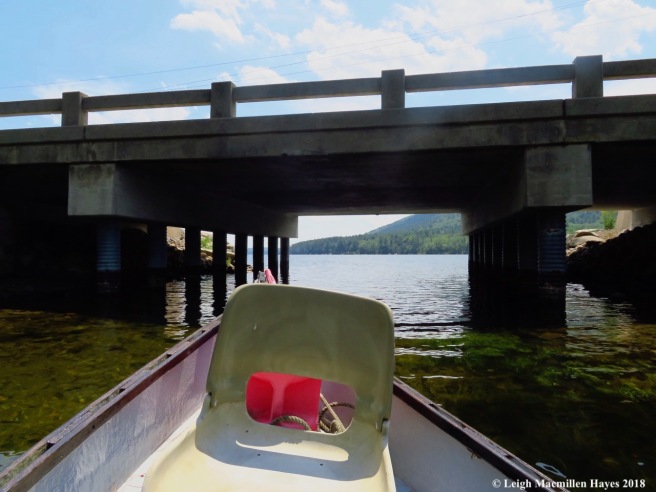 Another turn to the left and then to the right and we passed under the Route 302 Causeway into the much larger middle basin. 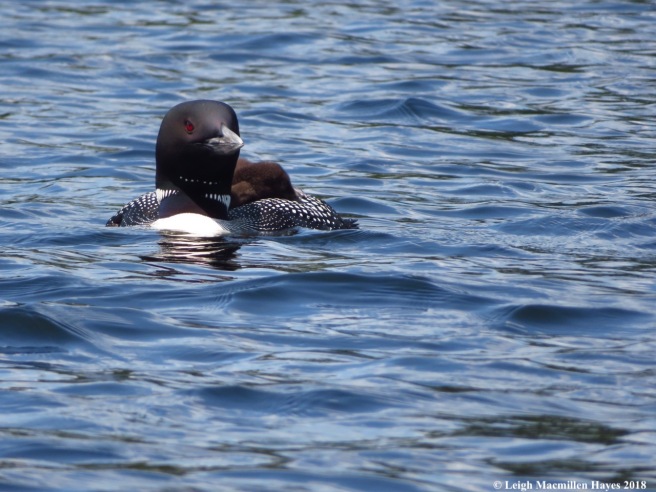 It was there that more gifts were to be presented. 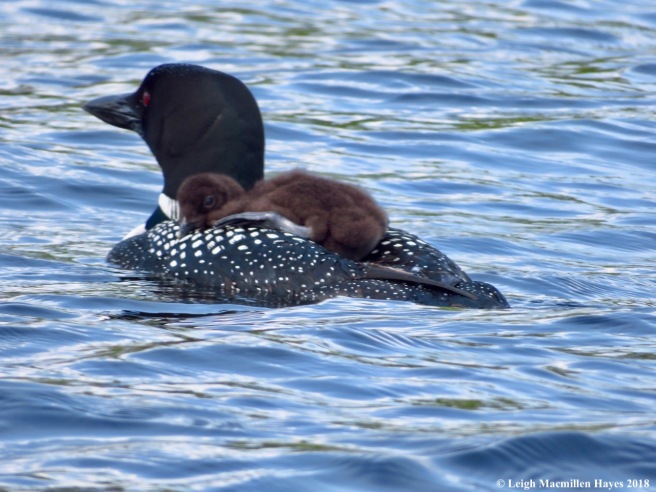 Momma or Poppa Loon, for one can’t tell the difference from this angle, with a chick snuggled on its back. 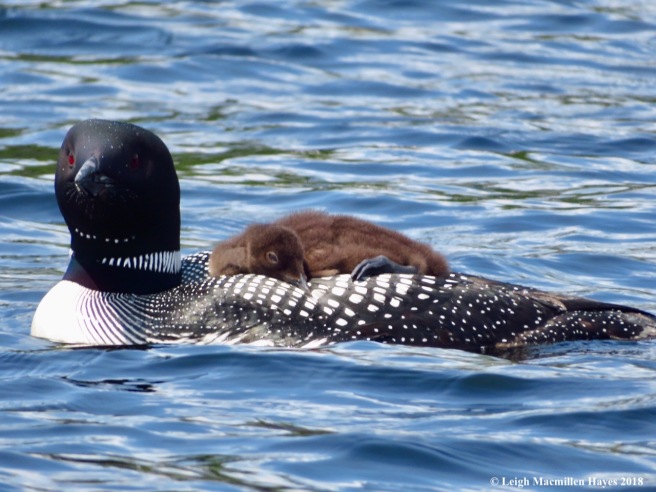 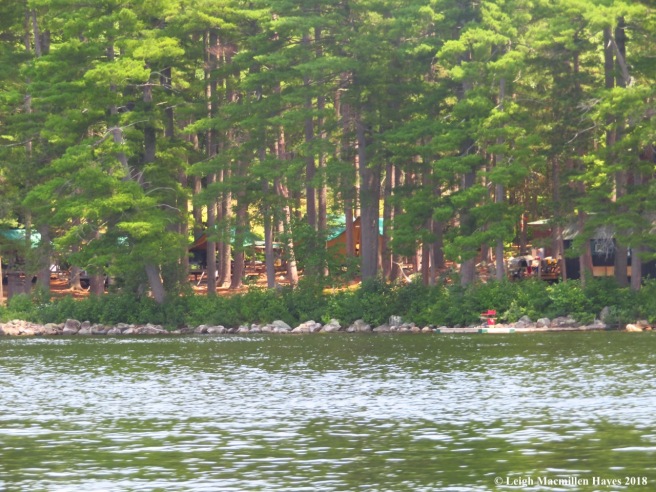 We had stopped the engine by the loons and drifted for a bit. But then it was time to move on toward Camp Winona, where not a camper or counselor was to be seen by the platform tents or any of the waterfront. We thought of stopping to visit our friend, Camp Nurse Rosemary, but weren’t sure if she was working today and so on we chugged at our ever so slow speed, which was much to my liking. 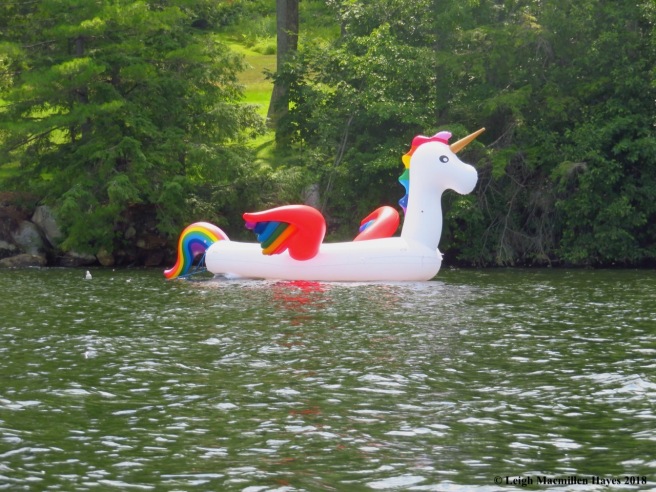 Thankfully, it was fast enough to keep away from the pond monster, Moosey the Unicorn. We sure do share this water body with a variety of creatures. 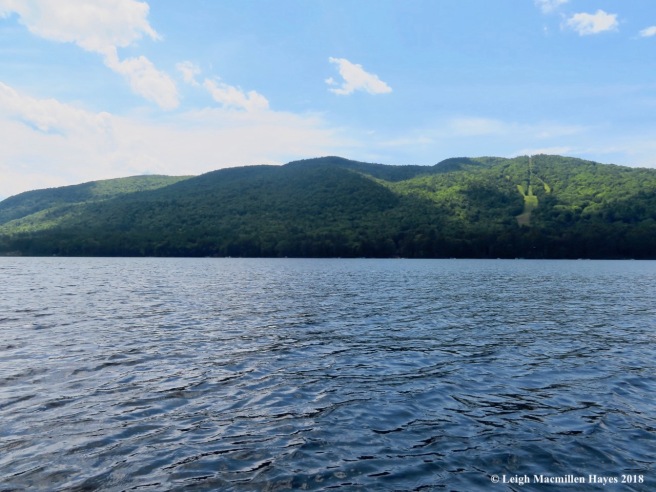 Across the way, most of the ridge line of Pleasant Mountain came into view and we made a discovery. 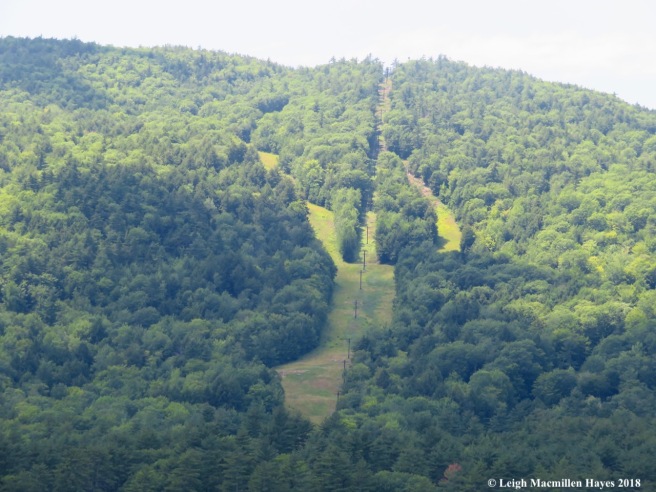 It looked like a lobster! Or maybe it was a crayfish, since we were on Moose Pond. 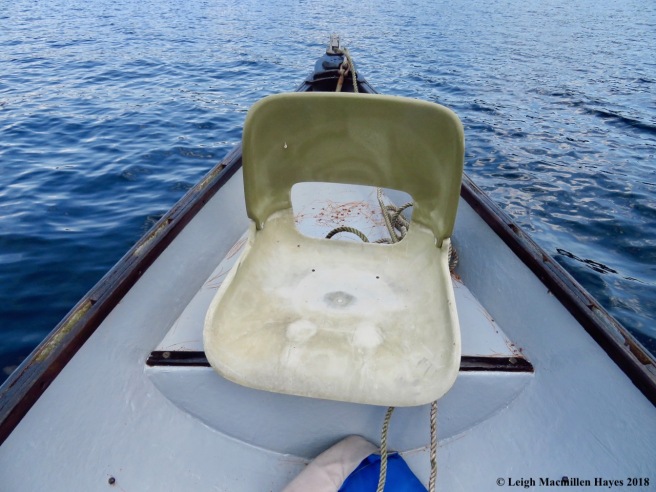 Eventually we turned around, saving the southern basin for another day. 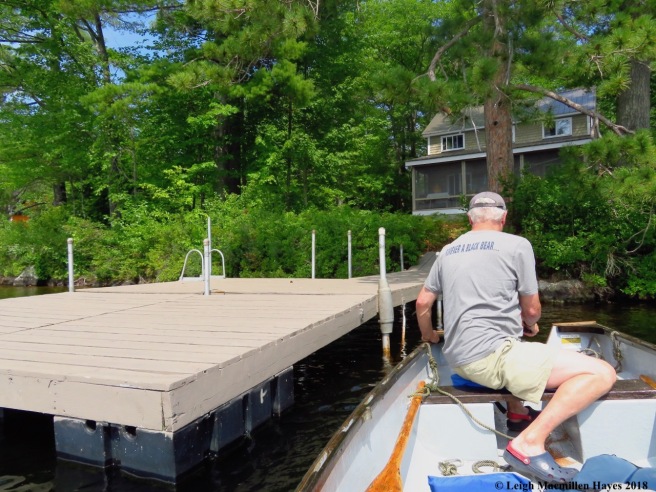 Our maiden voyage in our new/old boat came to an end as my guy successfully backed it into its resting spot at the dock. And Sam Adams helped us toast the adventure as we christened the boat: S.S. Christmas.

Christmas in July was certainly celebrated on this Mondate.

4 thoughts on “Christmas in July Mondate”