I wasn’t sure what to expect this morning when I drove to an undisclosed body of water for a boat trip to see an eagle chick in a nest. The reality was that though I’ve seen many eagles and twice had to cover my head with my hands for fear I was about to be dive bombed, only to discover the bird quickly grabbed a fish not far from my location, I’ve never seen an eagle nest. 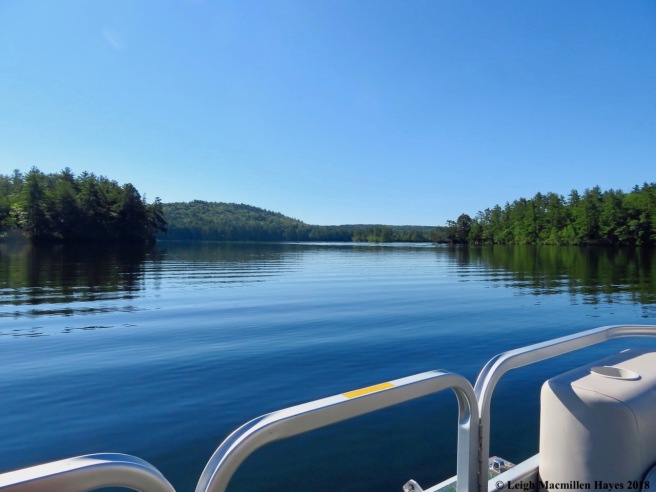 And so, I was graciously met at a camp road and escorted to the dock, where we boarded a pontoon boat for the expedition.

Within minutes of leaving shore, we spied several common loons and paused to watch them swim . . . 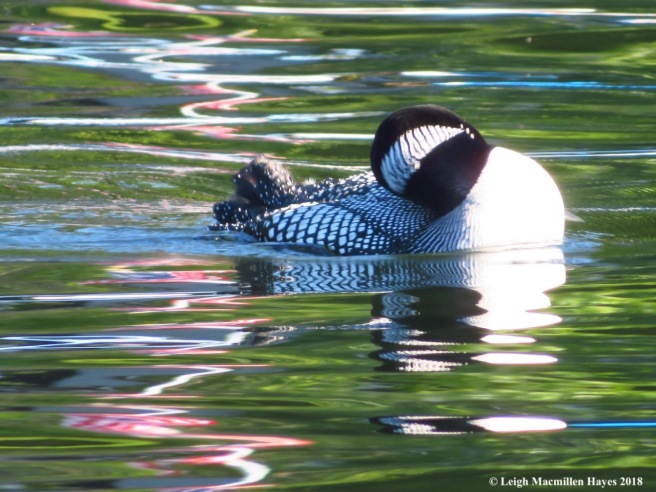 and preen. Feathers are important to loons and all other birds, for they provide protection from weather, including rain and sun. Aerodynamics also come into play, for the feathers give the body a smooth contour and help reduce drag in the air. To preen, the loon grasps a feather with its bill and works on it from base to tip, getting rid of oil, dirt, and parasites. The bird then repositions the feathers, straightening out the barbs on either side of the shaft–thus providing a smooth, weatherproof coat. To aid in the weatherproofing, the bird collects oil from a gland on top of the base of its tail and spreads it over the smooth feathers.

At last we pulled away, my hostess (M) and host (S) eager to show me the eagle nest and a young fledgling. With apt directions, they pointed out the tree and told me where to focus the binoculars and then my camera. I was pretty sure I found the spot.

But alas, a few minutes later they realized they were pointing to the wrong tree. A trip refund was surely in order, but . . . they regrouped, scanned the tree tops again and found the actual nest. Though it was difficult to tell from our location below and because they may have been hunkered down, we didn’t think we saw any birds, but we maybe we did. It apparently wasn’t feeding time and mom and pop were nowhere to be seen.  M  and S were disappointed, but I wasn’t. My first eagle nest! And maybe some babes, but even if not . . . my first eagle nest!

Suddenly, splashes of water caught our attention and we turned in our seats to focus on the action closer to the boat.

A loon undulated in the water in a most frantic fashion, moving back and forth in about a ten-foot space. 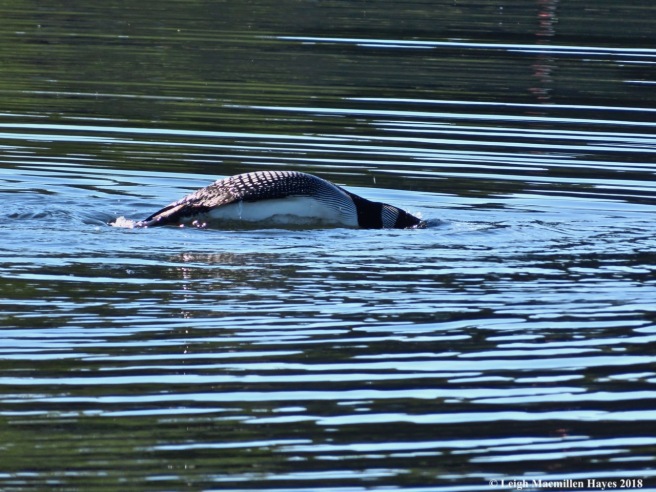 Whatever was it doing? We panicked. What should we do?

Each time it pulled its head up, we noticed its beak was wide open. Was there a fishing hook stuck in its mouth? S pulled out his cell phone. Who should he call? Kappy Sprenger, a local wildlife rehabilitator? Or the Maine Warden service?

Again and again, it thrashed on top of the water and our concern rose with each movement.

We each developed our own scenario, none of them ending with a positive outcome. 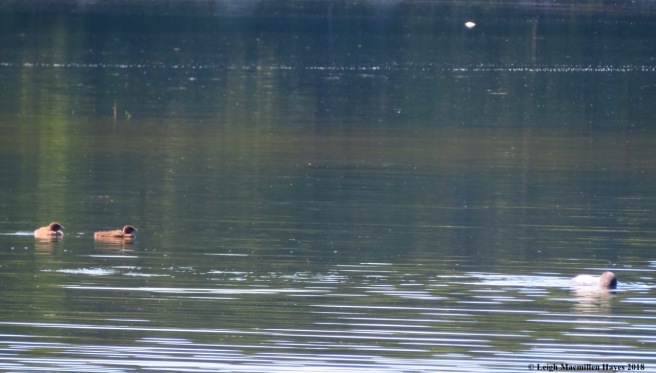 Meanwhile, another adult approached with two youngsters in tow. 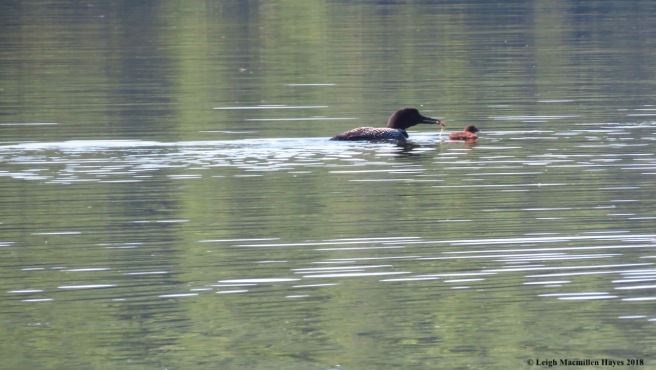 The second adult found a smidgen of food to dapple in the water and offer to the chicks.

Fish are the primary food source for loons and they’ll catch whatever species they can. But . . . they also feed on crayfish, aquatic insects, and sometimes vegetation.  What we saw being offered was indecipherable.

Meanwhile, the thrasher came up with a big catch. Had it been going after a fish all that time. Was it not the victim, but rather the predator? Indeed. But why was its mouth always wide open and not closed like a spear? Was it chomping on the fish? How could that be? Loons can’t break up their food the way mammals do, for they have no teeth.

Whatever the answers to our questions, the outcome, or rather, income was obvious and the loon quickly consumed its prey. 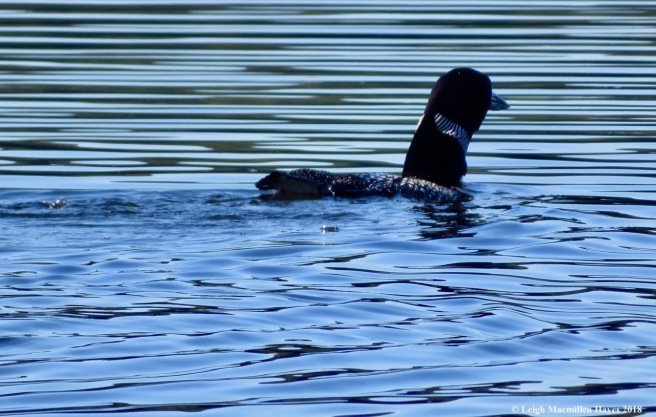 Do you see the intake making its way down the bird’s throat? Swallowed whole, the fish would be ground up in the loon’s gizzard, a muscular structure that is part of the a bird’s stomach.

At the same time, the other adult felt the need for a shower, while a curious chick peered below a wing. To shower, a loon rises up and splashes.

A vigorous body shake follows–it’s all part of their maintenance routine. The splashing and shaking help to settle their feathers back into the proper place, whether for beauty during mating season, or weatherproofing the rest of the year. 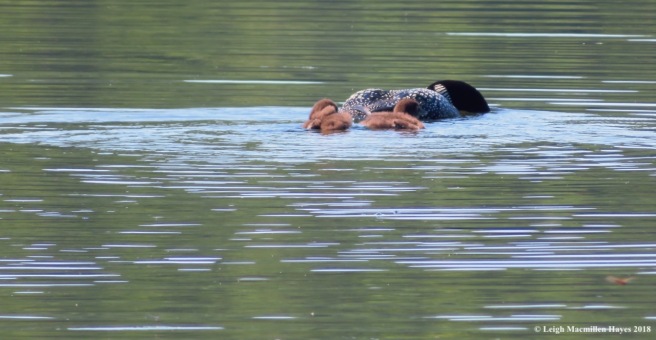 And then it was time to peer into the water again, ever in search of the next meal. 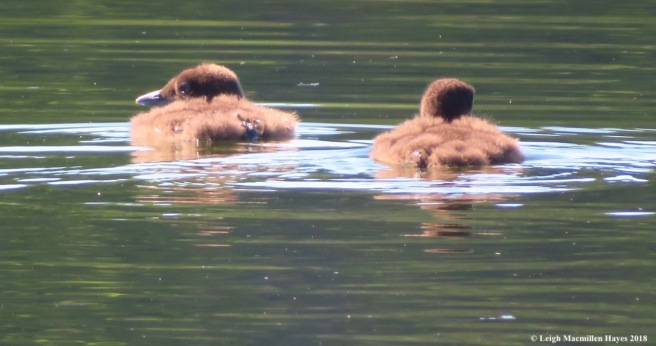 We learned something new today, M, S, and I: That what we might interpret as loon-atic behavior may actually be otherwise. Perhaps the lesson was meant more for the chicks than us, but we were suddenly wiser.

Thank you, M & S, for sharing your special place with me. And here’s to tomorrow’s 2018 Maine Audubon Loon Count. I suspect I won’t see any loons in the area I’m assigned to, and if I do, it will certainly not compete with today’s crazy loon antics.