Some days are meant for staying close to home. Such was today–a perfect 10 kind of August day with cool temps at either end and a sunshine sandwiched between.

One of the starts to our day was receiving two signs that announced the fact that our camp property is award winning–at least for a LakeSmart Award (don’t check inside for any award winning style or cleaning habits because you won’t find either here). We tipped our hats to Roy Lambert, vice president of the Lakes Environmental Association Board of Directors, and secretary of the Maine Lakes Society Board of Directors. Roy coordinates the local LakeSmart program sponsored by LEA.  He visited camp a few weeks ago and evaluated the surrounding land, then submitted a report. And we waited.

The final conclusion with only a couple of recommendations:

In his presence, we immediately posted the sign on the red pine by the water’s edge and then walked up the driveway to place one by the road as well. 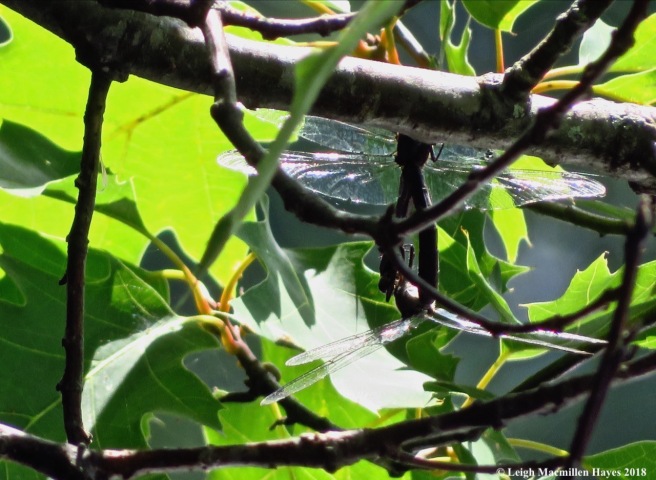 After Roy left, we settled into the day and discovered others who had settled momentarily, making use of a red oak branch dangling over the water for their canoodling session.

It’s rare that I’ve lounged this summer, but a new-to-me book purchased yesterday at the Lovell Arts and Artisan Fair book sale drew my attention between mini naps. 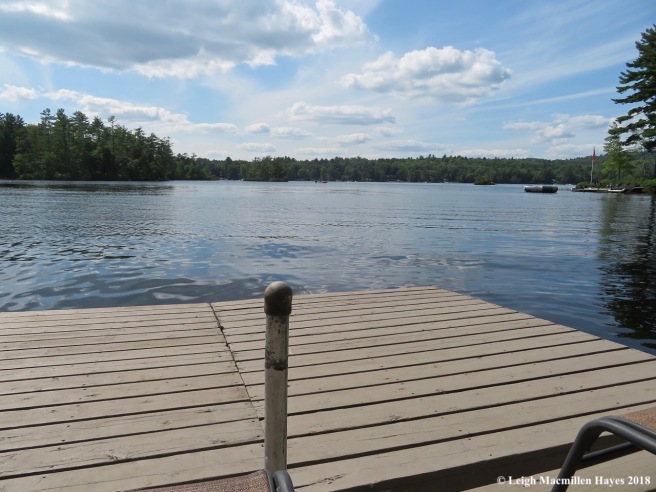 When I wasn’t napping or reading, however, I spent time staring across the pond.

And to the south.

All about there were bass boats for today featured a club tournament. The thing about bass tournaments is that except when the fishermen are zooming to the next best spot, they are quiet as they troll. And I have to thank them for a few weeks ago I wrote to a club president and asked that they please be aware of the parking situation on Route 302. Their trucks and trailers have long blocked our view as we precariously try to pull out onto the busy road. In the past, I’ve asked for help from others, including Inland Fisheries and Wildlife staff and local police, to no avail. But, this time was different. The club president immediately responded to my request and passed the word along to others as well. This morning, there were orange cones blocking cars from parking a certain distance from our road and as we drove to church, we were able to pull out without risking our lives. Thank you Steve and Wayne, and I hope you also had an award-winning day.

Because of there being more boats than normal on the lake, however, occasionally the waves rippled my way. And beside me, the dangling oarlocks in the S.S. Christmas clanged against the inside of the boat.

The bass fishermen weren’t the only ones seeking a catch and I watched a common loon that spent all afternoon nearby, sometimes looking for a meal, other times preening, and even merely floating.

Of course, bait fish swam abundantly below my locale–perhaps finding protection in the shadows offered. 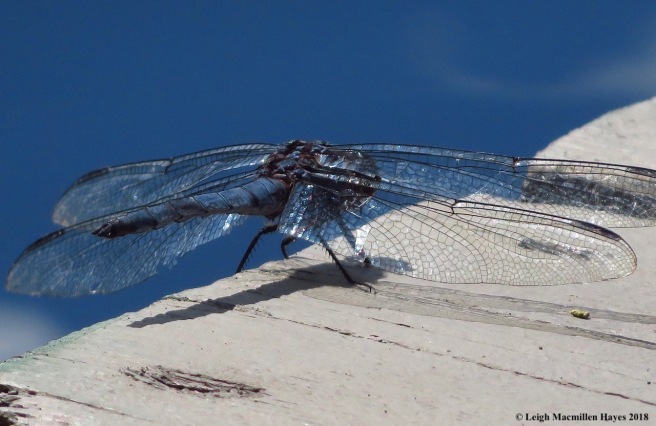 Also on the hunt, but for insects rather than fish, were dragonflies and damselflies including this Slaty Blue Skimmer, its colors matching the sky reflection on the water.

A Lancet Clubtail I spied on the wood first,

and then on the shrubs in the vegetated buffer.

And a Swamp Spreadwing Damselfly found a spot to hang below the shrubs and just above the water’s edge.

Because I was looking, I also found the carcass of a crayfish, which surprised me for I rarely see one and had to wonder if a heron or another bird dropped the remains of a fine meal. 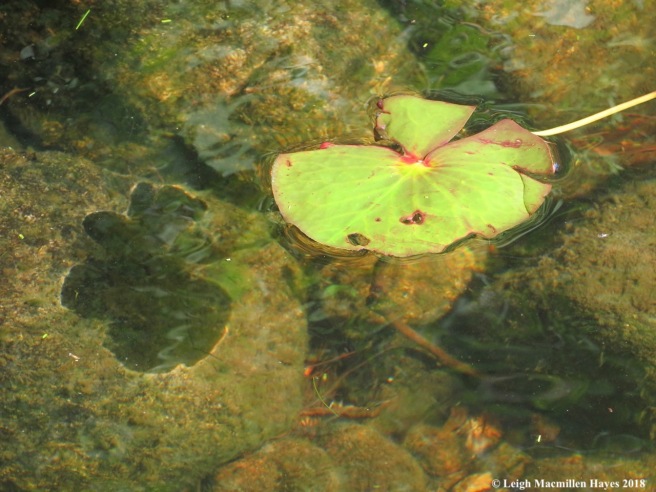 As the wave action continued, the leaf of a fragrant water lily floated by, torn from its base. In the shadow below, it transformed . . . into a shamrock.

Other transformations also took place as boulders under the water’s surface became works of mosaic art.

And waves reflected skylight in a more modern polka-dotted form.

Even that pattern was sometimes interrupted . . . by a passing oak leaf.

At day’s end, it was all about taking the time to be rather still. To read. To write. To swim. To watch. To notice. To think. To wonder. To admire. To be. Docked.