I suggested two hikes today to my guy and rather than choose one, he thought both sounded perfect. And so our journey began about noon as we ascended the 2.5 mile trail that twists and turns beside Mill Brook. Our destination: Long Mountain Ledges off Vernon Street in Albany, Maine, a property owned by Mary McFadden and Larry Stifler. Through their generosity, many trails in the area are open to the public. And through the work of their employee, Bruce Barrett, those trails are well maintained. 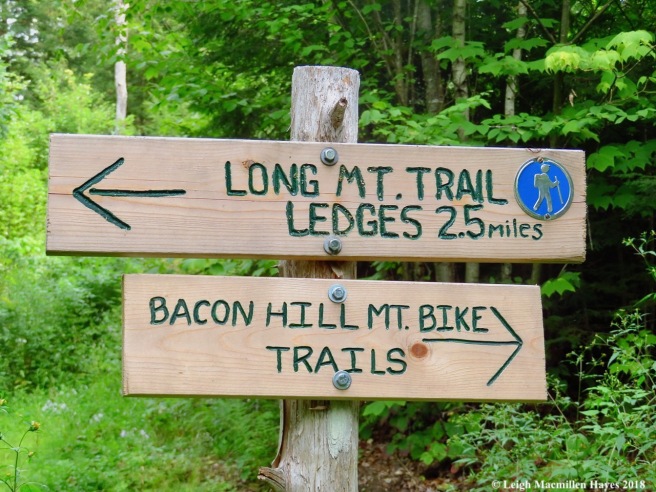 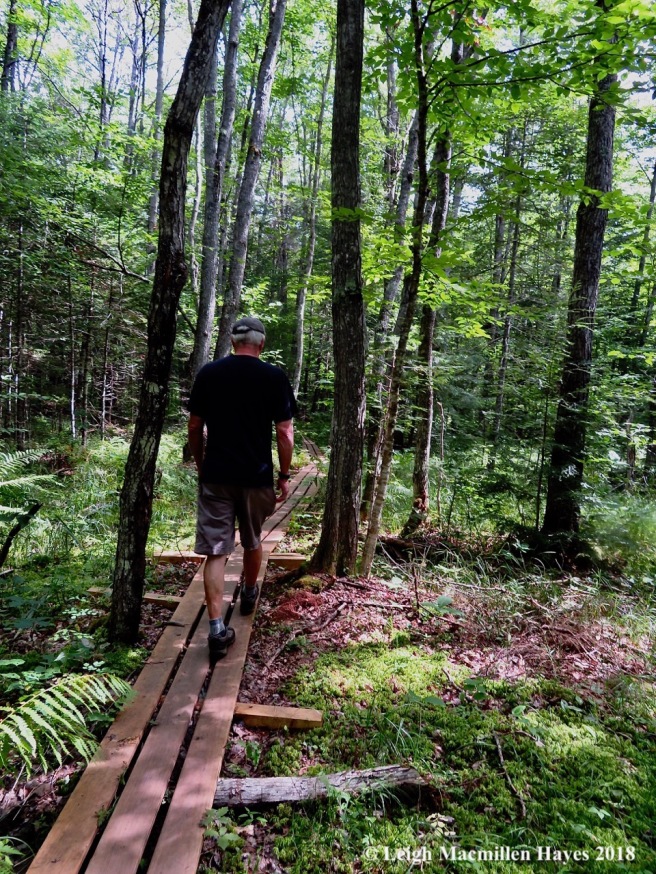 At the start, a long series of boardwalks passes through a wettish area where so many ferns, and mosses, and wildflowers grow. 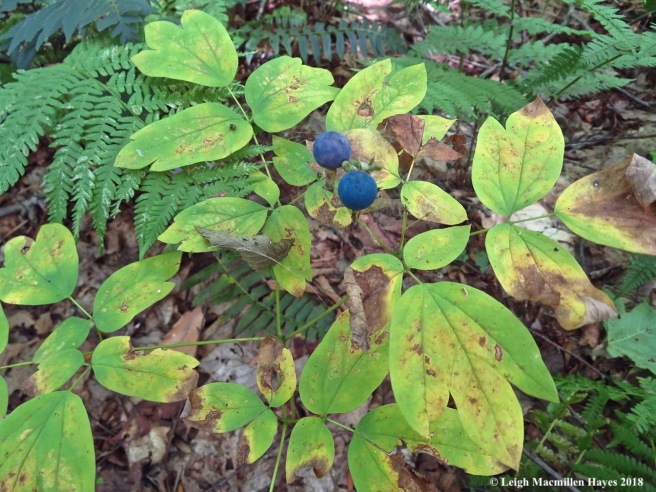 Some, such as the Blue Cohosh, have matured to their fruiting stage–and their leaves hinted that another season is in the near offing. 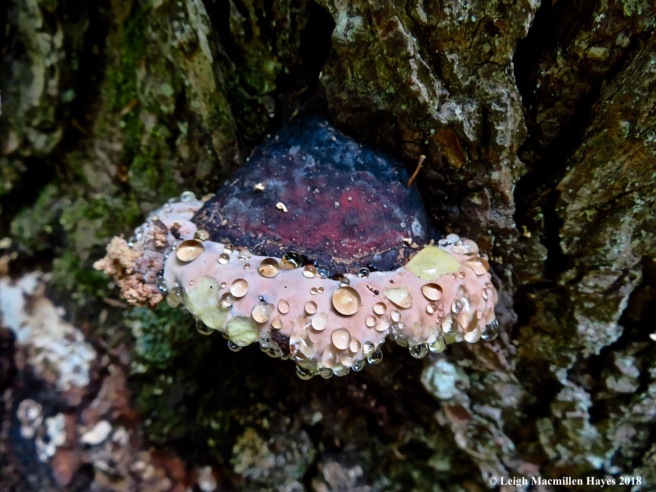 Once we began to climb, the natural community changed and so did the residents. One in particular reminded me that I have yet to understand its behavior. Why does the Red-belted Polypore weep, I wondered. It’s not a case of morning dew for nothing else appeared to have droplets of water. In searching for an answer, I learned a new word: gut·ta·tion–/ɡəˈtāSHən/, noun: the secretion of droplets of water from the pores of plants. On gardeningknowhow.com, I found this explanation: “The plant doesn’t always need the same amount of moisture. At night, when temperatures are cool or when the air is humid, less moisture evaporates from the leaves. However, the same amount of moisture is still drawn up from the roots. The pressure of this new moisture pushes out the moisture that is already in the leaves, resulting in those little beads of water.” If this is correct, I’m assuming the same is true for fungi. 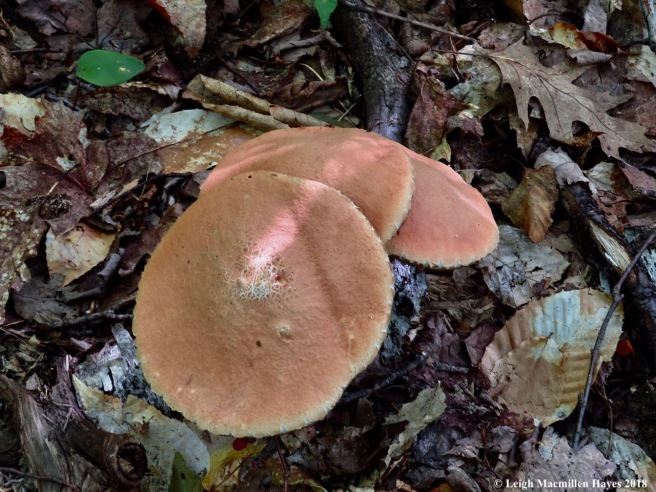 There were plenty of other mushrooms to see, including the pancake fungi my guy pointed out. He’s such a mushroom guru (NOT) that I instantly believed his identification. After all, they were plate-size and did resemble pancakes. All they needed were some blueberries, butter, and maple syrup. 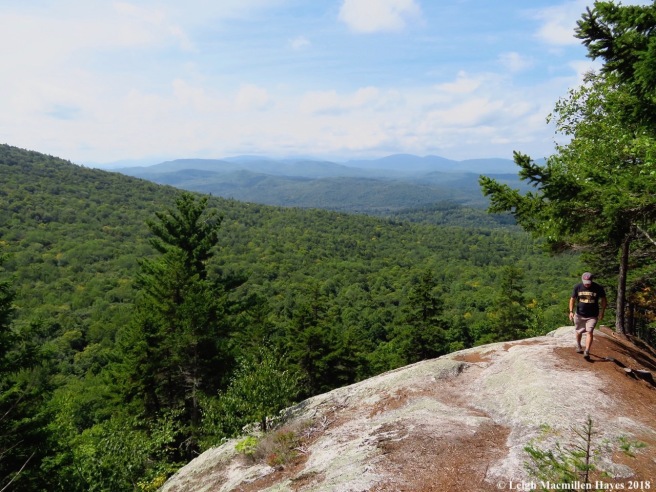 Because the trail was so well created, it hardly felt like a climb and in just over an hour we had reached the ledges where the view included Round Mountain to the immediate left, also owned by the Stiflers, and the Whites in western Maine and eastern New Hampshire beyond. Suffice it to say, this was lunch rock. 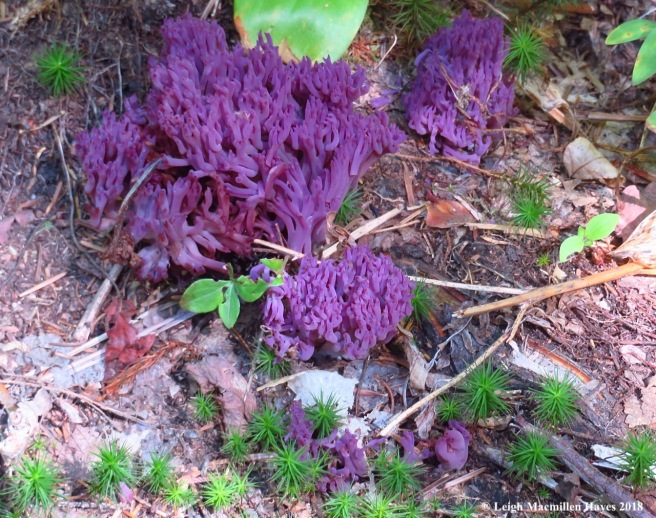 We descended via the same trail and I love doing that because there’s always something different to see. Today, it was a purple coral fungi. Did it begin life as a different color and the purple was a sign of maturity, I wondered. It didn’t matter. What mattered was that I couldn’t recall ever seeing that color before and it seemed rather royal. 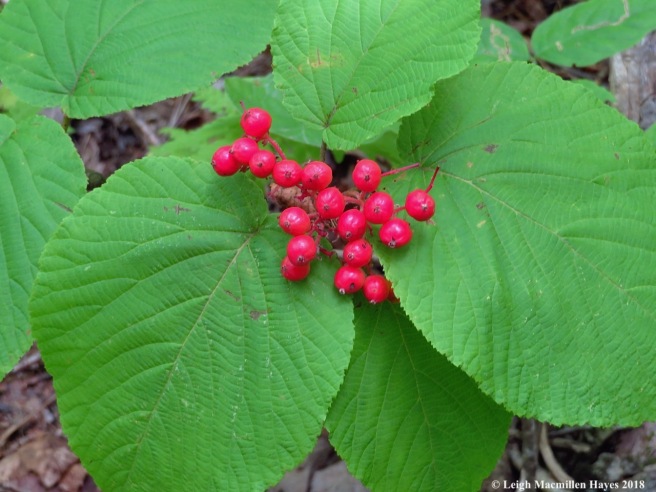 There were also hobblebushes to admire, they’re green leaves and red berries adding a bit of Christmas joy to the scene. OK, so I’m rushing seasons, but I am a winter gal. 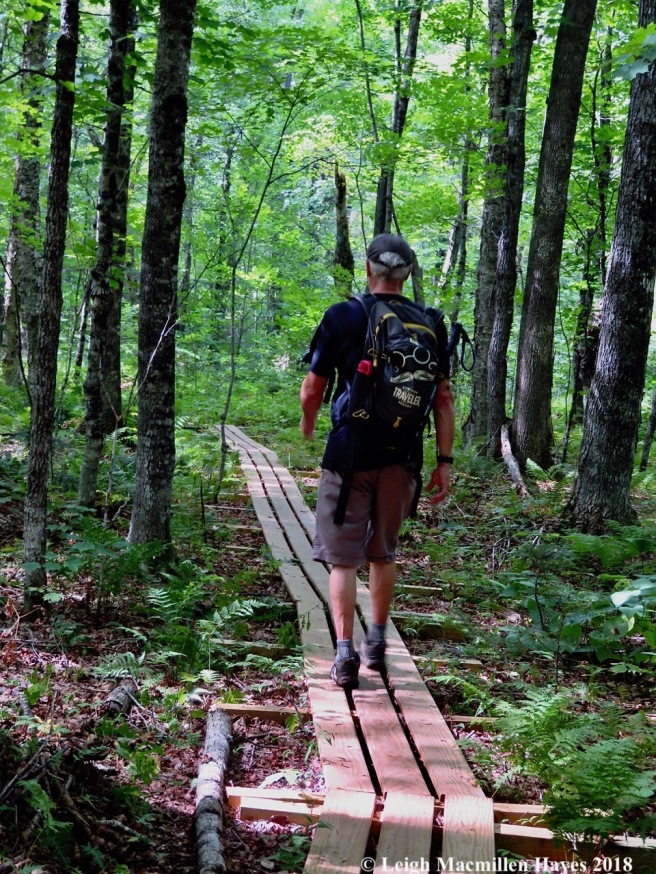 Five miles and 2.5 miles later, we walked back across the board walk, hopped into the truck, and drove south. 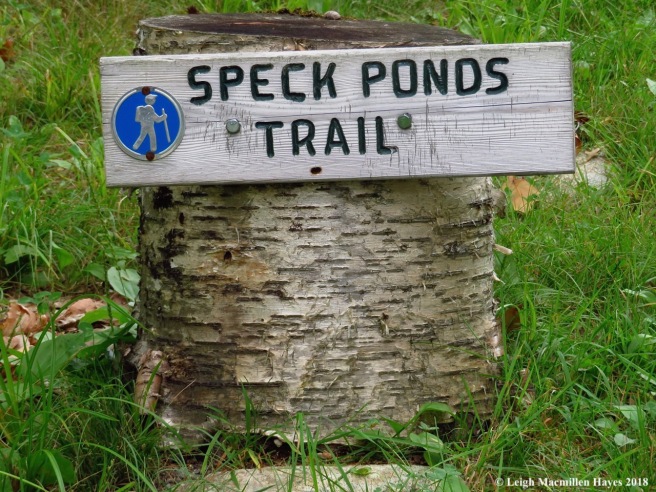 For all of ten minutes, for our next destination was another property owned by the Stiflers. This time, we followed Hunts Corner Road to Hutchinson Pond Road and looked for the trailhead to the Speck Ponds Trail. If you go, know this, drive until you think you are almost there, and then drive some more. It’s located on the right, along the dirt portion of the road, just after the mailbox tucked into a canoe! Huh? You’ll have to take a look for yourself to understand what I mean. 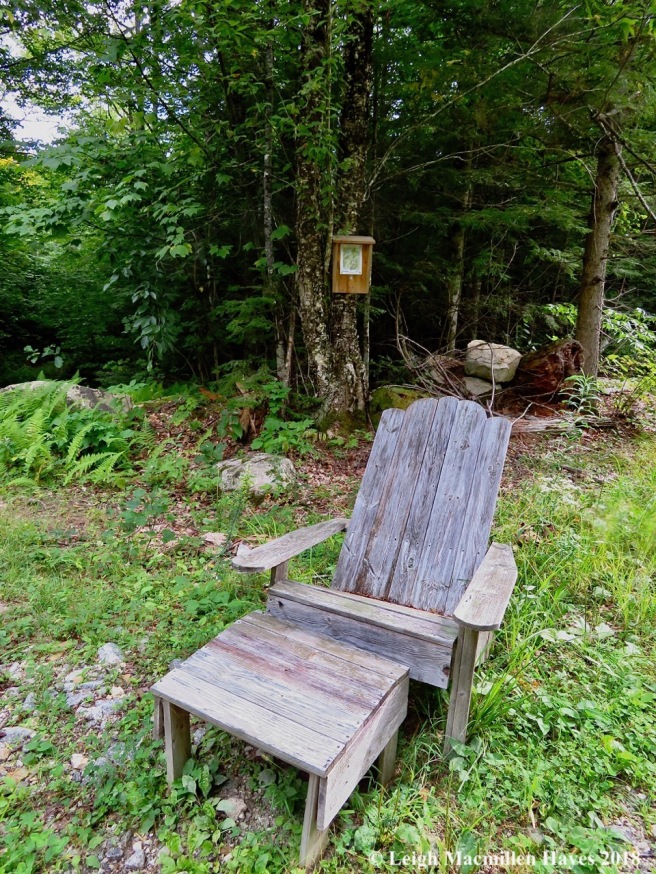 I’d heard that some trail improvements had been made since I’d last ventured there. Indeed, they had, including new red trail blazes and an Adirondack chair by the trail map. The significance of the chair, however, wouldn’t be revealed to us until we finished. Onward we journeyed. 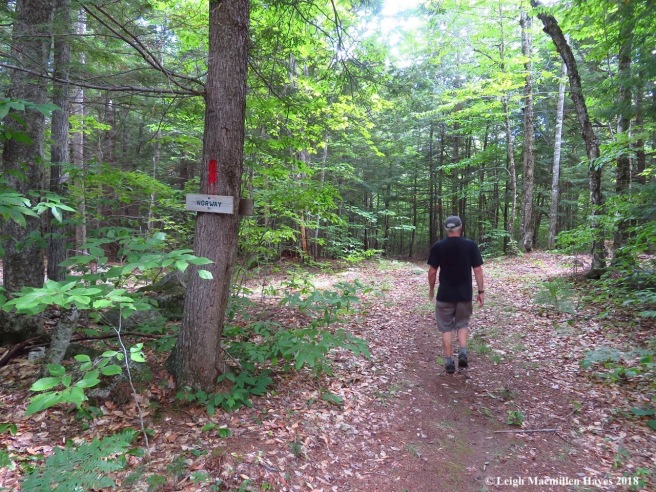 And crossed from Albany to Norway, Maine, via the woodland trail. 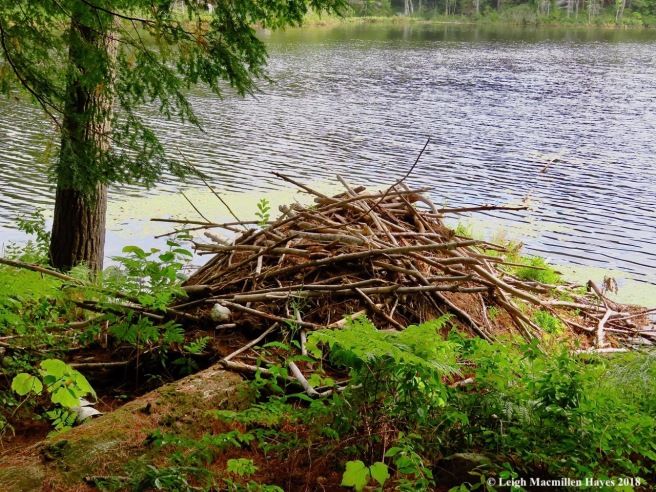 First, we circled halfway around Upper Speck Pond, noting signs everywhere that beavers had lived there in the past. 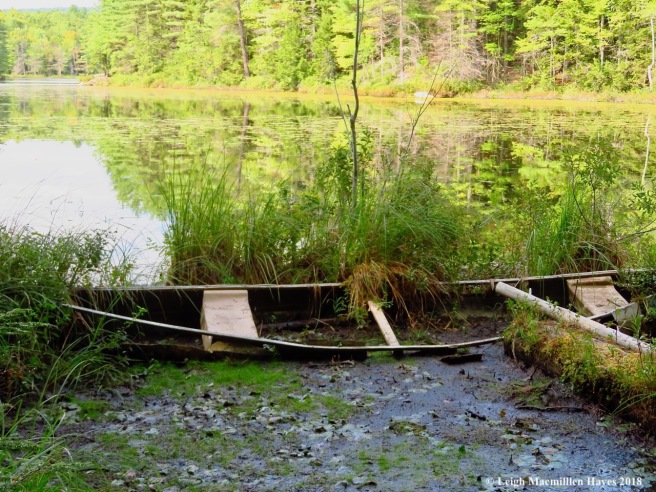 And an old canoe that had its own stories of yore to tell. Somewhere, a family or group of friends know the history of this sunken artifact. 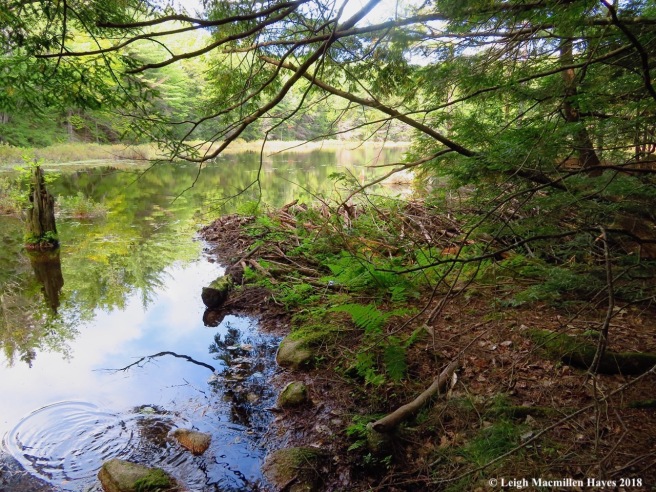 About halfway around, and really, directly behind the sunken canoe, another trail connects to the Lower Speck Loop. We followed it and eventually came to more beaver sign, including a dam with some new wood atop. 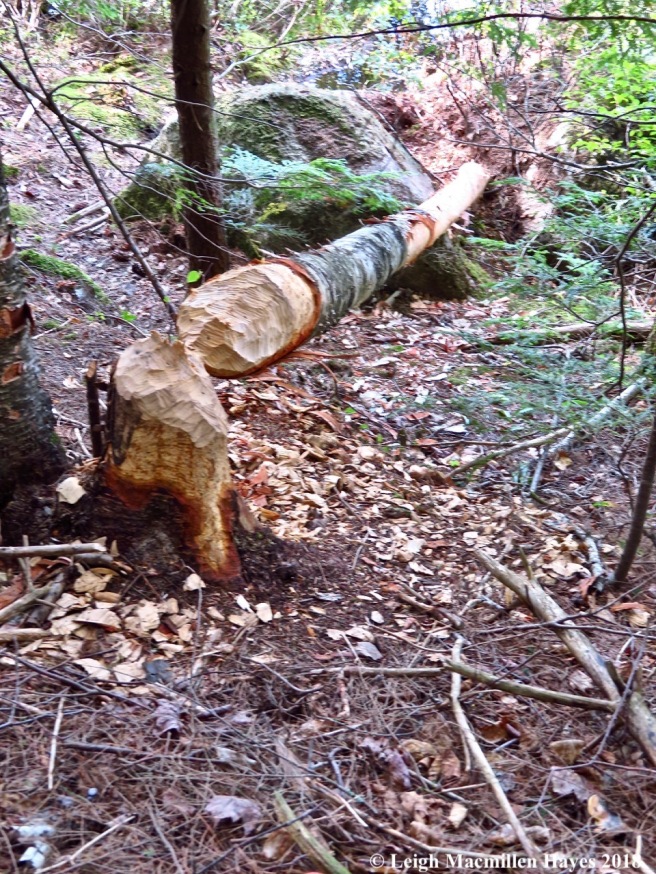 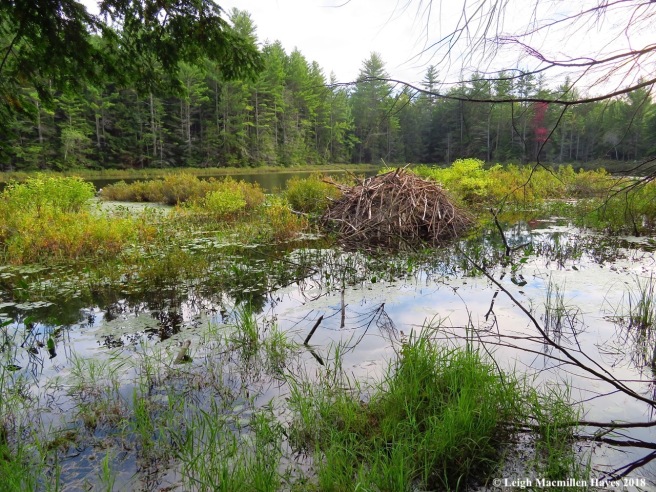 And another lodge. I lost count of how many we saw today, but suspected the one on Lower Speck was active. 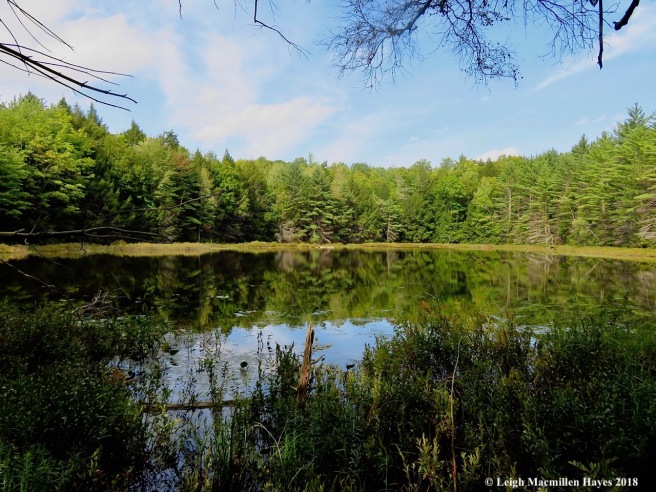 We moved quickly as we circled round both ponds for my guy had visions of tonight’s pizza dinner on his mind. And maybe a Red Sox game that he was missing as well. 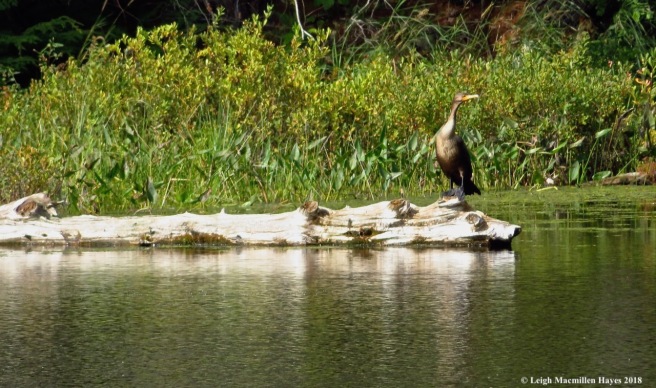 Despite our speed, we did pause to admire one of the pond residents–a cormorant.

A total of nine miles later, we’d climbed and circled and oohed and aahed and wondered along the way. Oh, and that chair, we considered sitting in it for we were hot and tired by the time we finished, but had we done so, we’d still be there–snoring away!