Until I spent time watching, I never realized how global a goldenrod could be. In fact, I must admit that there were years when I tried to eliminate these hardy yellow plants from the garden. After all, weren’t they weeds? You may think thus for so prolifically do they grow, but these days I prefer to think of them as volunteers who add beauty in any season. And during this season, they mimic life as we know it.

First, on sunny days European Honey Bees buzzed about. Yes, they are not native. But don’t tell them that. After all, they think they own the place. 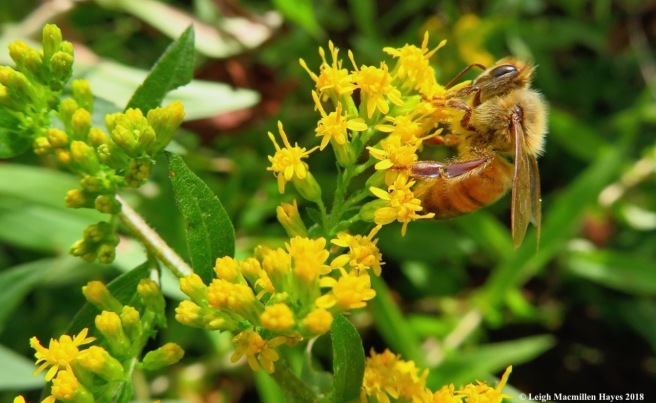 As quickly as they could, they sought nectar from the flowers and in the process, pollen clung to their hairy bodies. Aha, so in their greediness, goodness happened. How could that be? Or rather, how could that bee? (Corny jokes are forever a teacher’s forte)

As I gazed upon the minute flowers of the Rough-stemmed Goldenrod, I had to look for subtle changes of color in order to read the story. Ever a fan of the coloration of the Hover Fly, I was thrilled that I could focus in on this one. Then the realization struck–this fly wasn’t . . . flying. In fact, it was dead. And yet it still held its structure.

Looking up a stem or two, I noticed a predator in the waiting, its structure so otherworldly, much like an armored iguana. But it wasn’t a lizard.

It was a common insect that changed position as I changed lenses. The amazing thing is that it blended in so well, but that was all part of the insect’s strategy. Did the Hover Fly’s death have anything to do with the Ambush Bug? All are innocent until proven guilty and I needed to remember that, but I still suspected I knew the perpetrator.

For three days I stalked him as he stalked others. An Ambush Bug is willing to wait until just the right moment to attack its prey with those oversized raptorial forelegs and quickly dispatch it with a stab from his sharp beak. Who knew that in the small world of the goldenrod one needed to be ever on the alert? 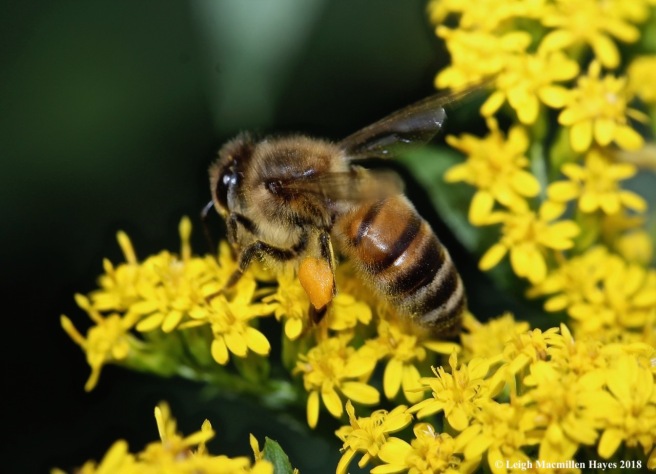 And still, a Honey Bee foraged and farmed.

Also on a mission was a Japanese Beetle, another immigrant in the mix. And I know that if I were to point out the unique idiosyncrasies of its body structure, I’d get booed out of town. But  . . . look at those colors, the details, and especially the antennae. It’s tough being the one dude that no others appreciate. 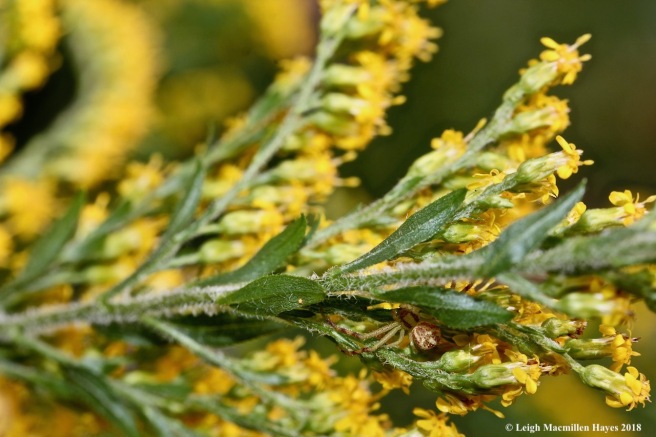 For every foraging or unwanted citizen, there was one hiding in the shadows, ever ready to catch the neighbors when they were most vulnerable. Do you see the green and brown crab spider?

Some even set up traps to catch their prey, but after all, we are all hunters and need to dine. 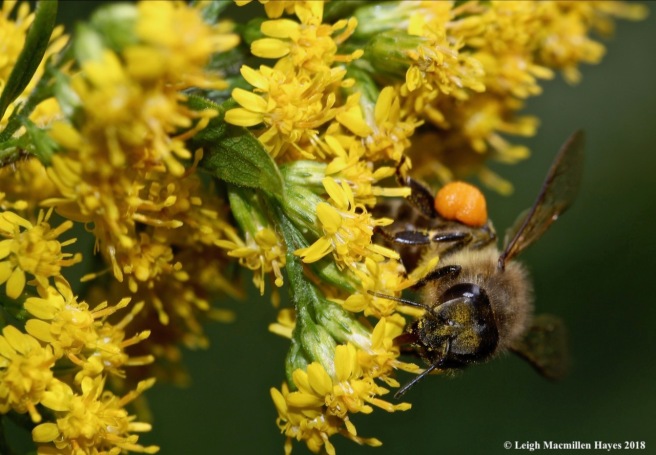 Still the Honey Bees flew in and out and chased off any others, even their siblings who got in the way. All were females, for such are the workers in their society. Ahem. Oh, excuse me. Just clearing my throat.

For all the time that I watched (and really, I only spent an hour or so each day for I did have work to do) I noticed a Locust Borer on one particular plant. Females tunnel into bark to lay eggs and I probably should have taken a closer look at the quaking aspen in the garden that has been compromised by so many insects. But here’s another thing–do you see the yellow tip on its abdomen? Locust Borers don’t sting, but should you touch one it will try to bore its tail end into you as if it were a stinging insect. Silly bug. 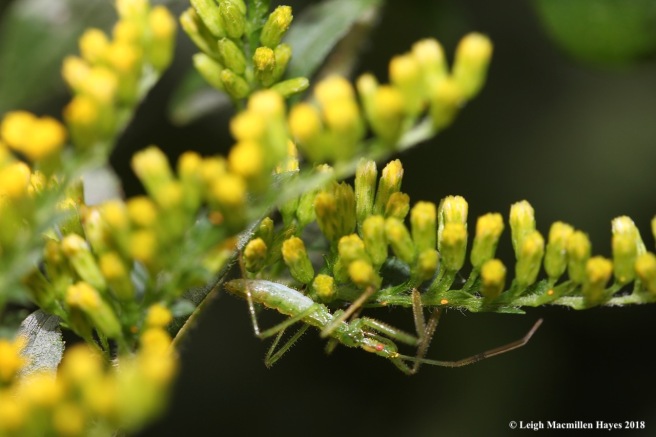 Peeking under a nearby stem, I found another seeking others–an Assassin Bug that was related to the Ambush Bug. Assassin Bugs are proficient at capturing and feeding on a wide variety of prey. Though they are good for the garden because they act as tiny Ninjas and prey on enemies of the plants, they don’t always discriminate about their prey. The unsuspecting victim is captured with a quick stab of the bug’s curved proboscis or straw-like mouthpart. I’ve had the opportunity to watch the action in the past, but I couldn’t always locate the little warrior, thought I knew it was somewhere among the drooped stems. 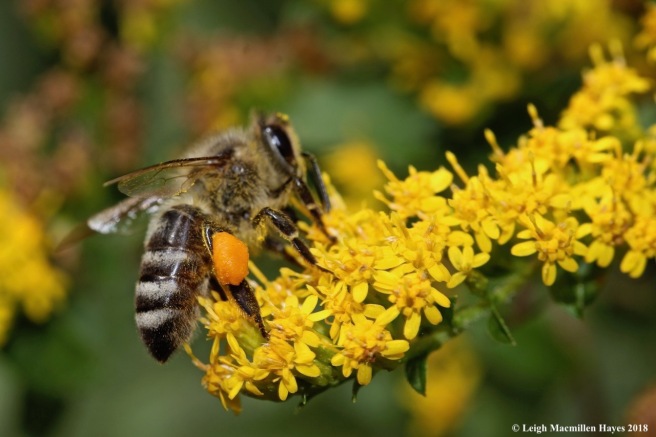 And still , the Honey Bees flew, filling their sacs being their main priority.

Not everyone could be a bee, but some surely tried to mimic their adversaries. Thus is the life of a Drone Fly that may have a bit of a hairy body, but it can’t sting. Instead, it had to outsmart its predators by being a look-alike. Such is known as Batesian mimicry, so named for the famous English naturalist, Henry Walter Bates. Bates discovered this concept while working in the Brazilian Amazon.  In the course of his studies, he realized that numerous non-toxic butterflies looked identical to a few very potent types.

Other non-bees on the flowers included a rather handsome sawfly, its wings so distinctly veined. 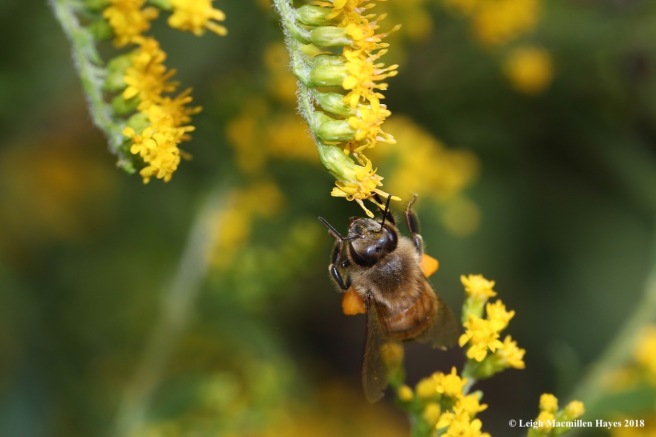 But the honey bees were on the move the most and managed to control the activity of those smaller and larger by giving chase to all. Occasionally, one had to pause and dangle in order to move some pollen into its sac.

Also known to dangle, for that’s what spiders do best, was another crab spider, Crab spiders may be tiny, but they can be cunning and ferocious. Like the predatory insects, waiting was the name of the arachnid’s game and I don’t doubt that this one was successful in securing its next meal.

And while still in a dangling mode, there were the inch worms of varying colors to spy, most of them slithering ever so slightly among the plants flowers, but some were on the move to the leaf that was greener on the other side.

This morning, I did discover a dead inch worm and again, like the Hover Fly that met its demise, I wondered who done it. Ambush or Assassin Bug? Those were my two choices. 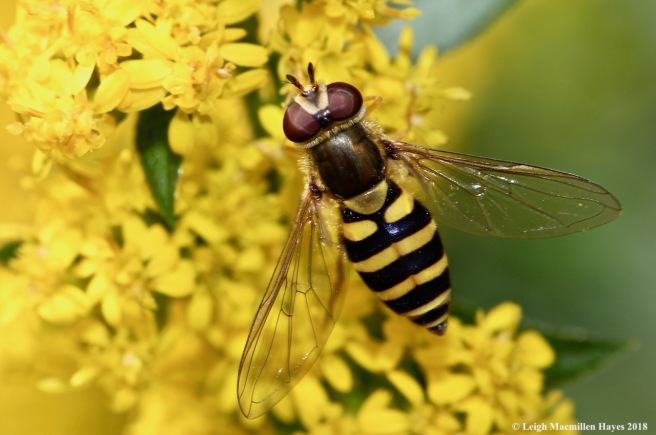 I did find a live Hover Fly and its presence made me happy. There’s something about its streamlined structure and minute hairs and clear wings and hovering ability that appeal to me. 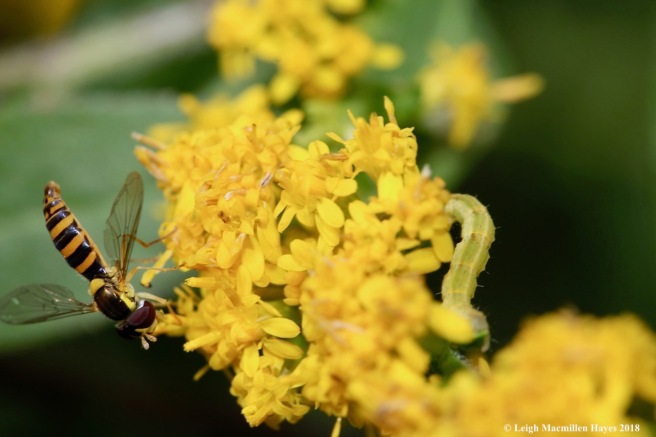 One even demonstrated that it could share the space with an inch worm.

Equally admirable was the Flesh Fly with its brick red eyes and handsomely striped abdomen. It’s called a Flesh Fly for its habit of locating decomposing carcasses and laying its eggs. I have to admit that thinking about that and the maggots to follow gives me a chill. 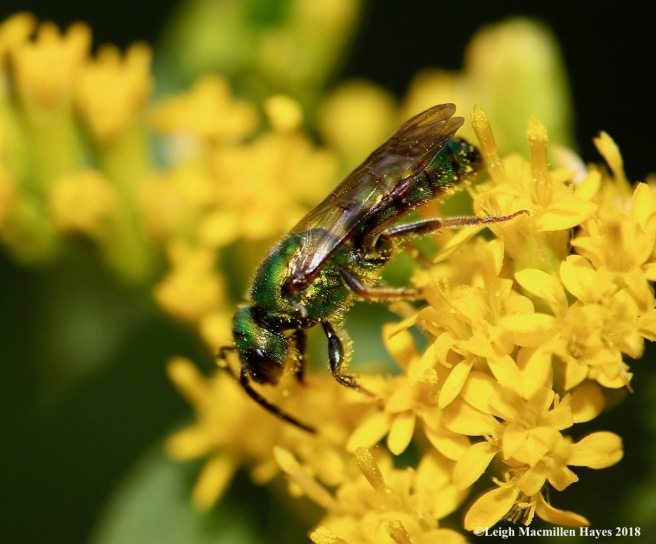 A metallic green Sweat Bee flew in periodically, but never stayed long. Thankfully, it chose to ignore me. In fact, considering how close I was and in the faces of so many, as always, the insects and spiders left me alone. I, on the other hand, continued to stalk them.

Surprisingly, even the rather aggressive Paper Wasp ignored me. I could hardly ignore it. Whenever he flew, most other flying insects performed a mini dance, flying up, swirling down and then settling again.

But take a moment to look at that body. It’s as if some insects wear a coat of armor. And in the wasp’s case that coat was dusted with pollen, just as nature intended so fertilization could occur.

Even the aggressive Bumblebee let me bumble about without incident. In my three days of watching, there were plenty of Bumblebees buzzing, but they tended to visit all of the surrounding flowers. Today, however, in a frantic frenzy, one sampled this flower and that along the goldenrod stem.

While the Locust Borer I mentioned earlier spent the last three days on the same plant, a second one flew in today and settled on a goldenrod about seven feet away from the first LB. Will they meet? I assume so, but in the meantime, it waved.

And in a different location than the first day, I found an Assassin Bug. The same one? Perhaps. But again, no food. Still, it waited. 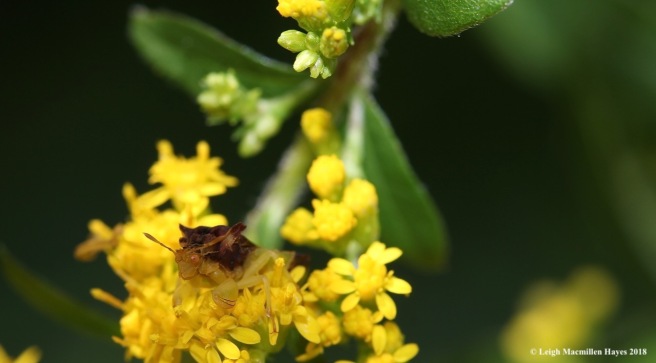 As did the Ambush Bug.

In three days, it hadn’t moved far, but finally decided to take a different stance. To its left, a half-inch worm stayed in one spot, though it kept changing position. And I kept waiting–why didn’t the Ambush Bug grab the little thing and suck its guts out?

Because . . . it was waiting for a more substantial meal I later learned. And my question was answered. What killed the first Hover Fly? An Ambush Bug. And this afternoon it worked on another. Drats. But, in this insect or arachnid eat insect world, finding a meal and gathering energy from it was the most important thing.

Its mature form wasn’t quite as attractive. 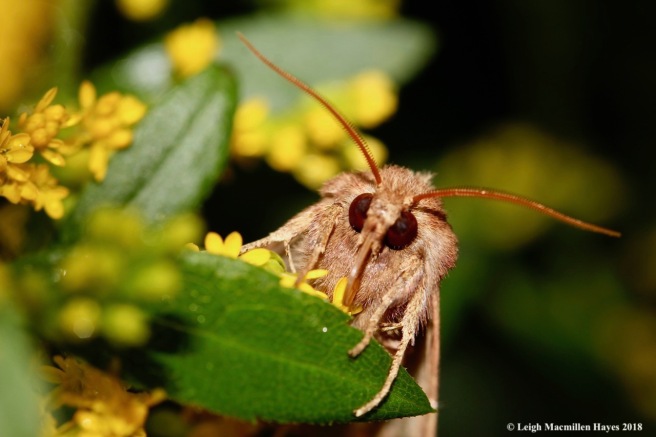 But still, what a sight to see tucked in among the goldenrods.

The garden may be small, but its offerings were global in nature when you think about it. Ah, those golden sights. Worth a wonder.  (And I left a few out!)