As a kid, science and history eluded me. Reading, and writing, and even, ‘rithmitic, I embraced. Well, only a wee bit of the latter, though my father thought my abilities were far greater than they were and he saw a bank position in my future. He was the mathematician. It wasn’t a subject for me to pursue. And so I became an English teacher.

And then one day I woke up and found I’d developed an interest in the how and why and the science of stuff. Added to that was a desire to know more about the past. And voila, here I am, some days spending way too many hours pursuing insects in the garden or bark on tree or dragonflies buzzing about. Other days, its following trails of yore and trying to understand the lay of the land and those who came before that interests me. My favorite days are probably those that find me pursuing the two subjects simultaneously. 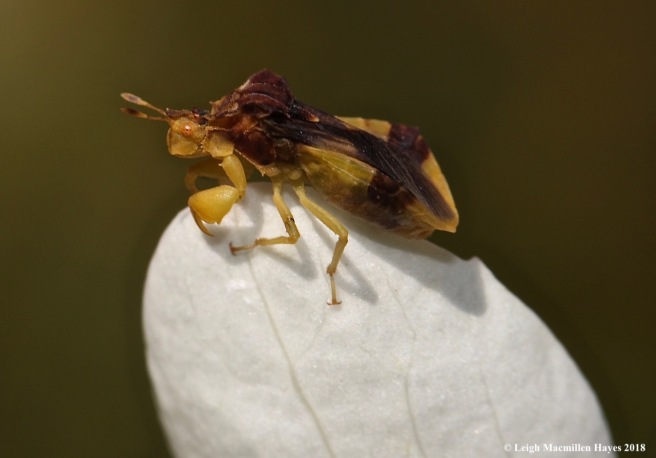 Today, I devoted spurts of time to a hydrangea bush that we rescued from a shady spot in our yard about fifteen years ago and transplanted to a sunny spot. What once was a dying shrub that rarely produced more than one flower is now a healthy specimen laden with blooms. And the insects love it.

My biggest surprise, however, was to find an Ambush Bug sitting atop one of the newly opened white flower petals. For the first time since I’ve been paying attention, the bug was on something other than a goldenrod and I could truly see its body. I’ve always thought it exhibited a hint of a smile, and do believe I’m correct.

An Ambush Bug is my “iguana” insect for its body structure always brings to mind a neighbor’s iguana that got loose one day and never was spied again when we were kids. (Or was it? Didn’t we find a dead iguana on the old dump road, Kate and Lynn? Was that Rob’s lizard?) Anyway, I think the Ambush Bug resembles an iguana, on a much smaller scale, of course. MUCH smaller. 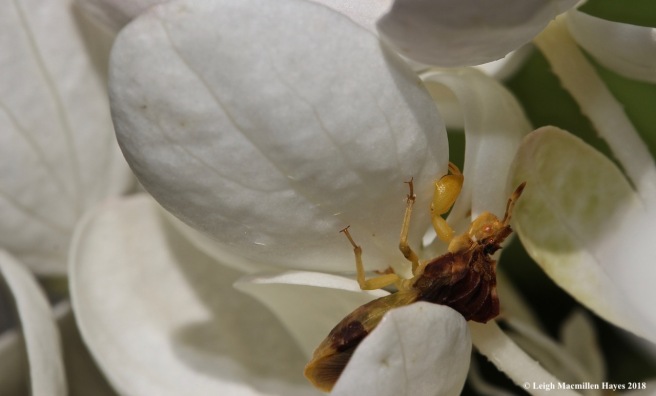 Seeing the bug on the white petals really threw me for a loop. Why was it there? What would it ever find to eat? The pollinators no longer bothered with the shrub on which it stood. They’d moved on to the goldenrods and asters below.

And how could this insect behave as one who ambushes when it was hardly camouflaged on the white petal? It must have questioned the same (if Ambush Bugs can question) for it turned this way, then that, and back again, and then moved from petal to petal and flower to flower. Usually, it hardly seems to flex a muscle as it remains in one spot for hours or days on end.

We studied each other, eye to eye, or perhaps more correctly, lens to lens, until I blinked and it flew off. I trust it landed on a nearby goldenrod, where a meal wasn’t too long in the making.

Just after the Ambush Bug and I parted ways, I noticed a subtle movement below and watched a tiger moth caterpillar that reminded me of a soft boa scarf one might wrap around a neck quickly slither down another flower on the shrub until . . .  it reached the edge of the final petal and fell to the ground, climbed up a fern frond, found its way back to the shrub and moved on to the world within.

I was beginning to think that all of the insects on the hydrangea would move on or in, but then I met the Red-legged Grasshopper. He set his elbow on the leaf bar and we consulted each other. Would he fly away if I moved into his personal space, I wondered. He wanted to know why I stalked him. 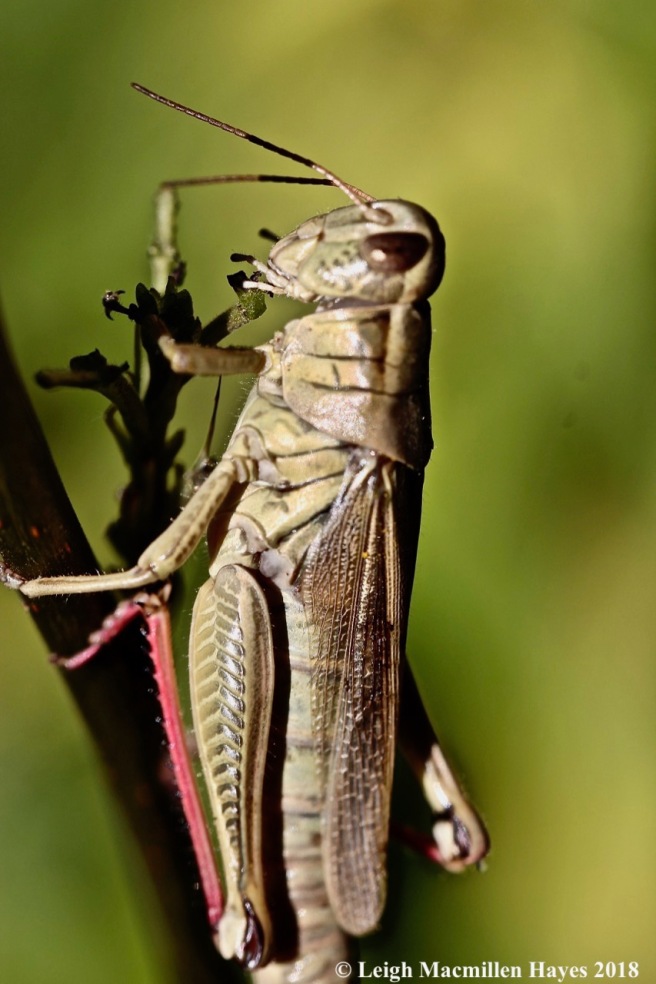 I mentioned his body of armor and the herring bone design and the leg joints and the spurs on its legs that drew my awe. 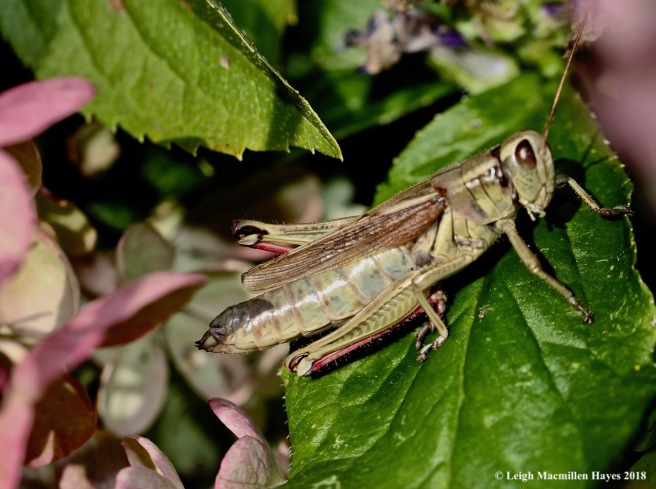 As a solo traveler, I knew it didn’t appreciate that I wanted to share the space. But, I couldn’t resist. Notice its feet and the segments on its abdomen and even the veins in its wings. Did I mention its mandibles?

As it turned out, there may have been a reason it wanted to be alone, but I was there. To. Witness. The. Poop. A blessed moment. It would have been more of a blessed moment had it pooped on me. Oh, and did I mention that grasshopper poop, like all insect poop, isn’t called scat. Rather, it is frass. Thanks go to Dr. Michael Stastny, Forest Insect Ecologist in New Brunswick, Canada for reminding me of that term. Cheers Mike.

Another moving about was a shield bug, so named for the shield on its back. It does make me think of a piece of metal one might use as protection. Combine the shield with the grasshopper’s suit of armor and you might think you were spending time in an earlier era. Much earlier.

But this shield bug didn’t care about the Middle Ages. Instead, it had one thing on its little mind.

Its offering was almost minute, yet pearl-like in structure.

The world I watched on the outside of the hydrangea made me wonder what might possibly go on within. As much as I wanted to break through the branches and take a better look, I knew I’d ruin everything and after all, it wasn’t my place. I did, however, get to witness one moving about briefly for a paper wasp left the goldenrods and heading under the hydrangea leaves to move the pollen about on its body. Why did it go under? Why not pause atop a leaf for such behavior? And how did it escape the inner world without . . . 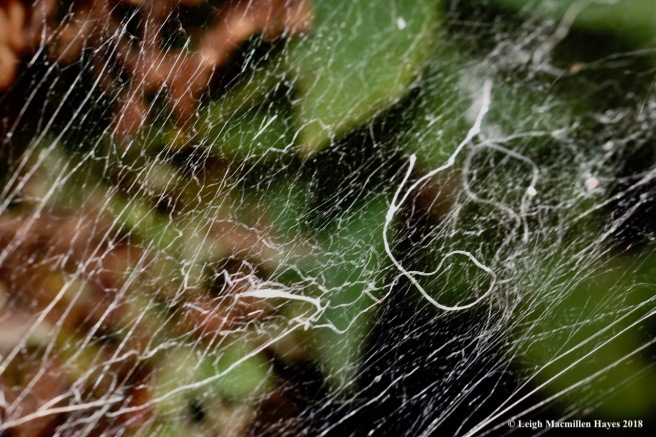 encountering a spider web? Funnel spiders had practically veiled the entire shrub with their silken structures. 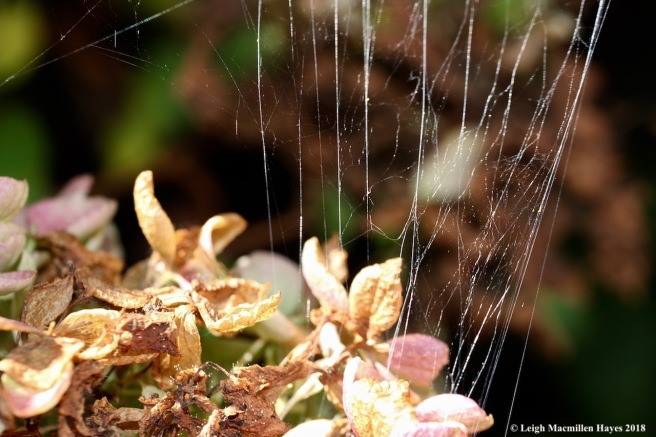 Though anchored with strength, they were extremely soft to the touch. 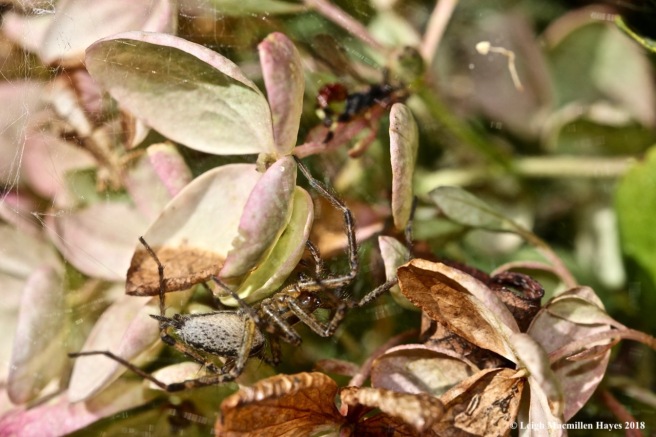 As the day progressed, I kept tabs on three funnel spiders, the mighty weavers that they were. All were wary of daylight. 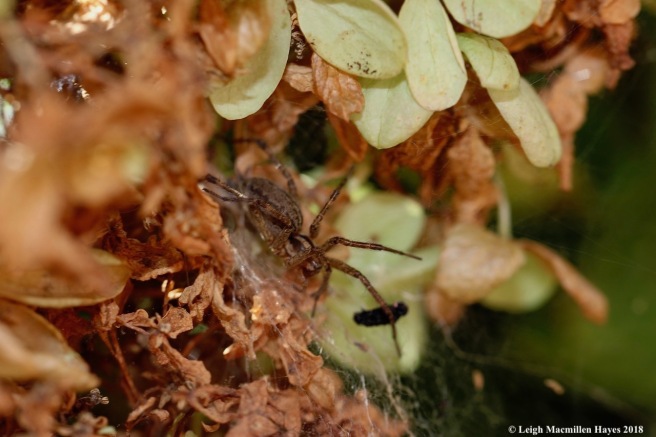 But one had set up its home on the eastern side of the shrub and so it spent the day in the shade and enjoyed fine dining on a small bee that I assume made a mistake of pausing while shifting some pollen on its body.

There wasn’t much left of it by the time this spider had finished its meal.

Later in the day, a web weaver on the western side began to show itself–and it also had a meal secured.

All of the insects and arachnids I saw, and I had to assume even more enjoyed the inner structure of the condo that the shrub certainly was, all spoke not to the past, but to the future.

And with that, I dedicate this blog entry to you, Jinny Mae. You have a better eye and understanding and ask better questions than I ever will. Here’s to the future!