Before heading onto the trail beside Sucker Brook at the Greater Lovell Land Trust’s Wilson Wing Moose Pond Bog Preserve on Horseshoe Pond Road in Lovell, today, a friend and I walked down the road to the pond where we hunted for dragonflies and frogs.

There wasn’t a cloud in the sky on this first day of fall and a crisp day it was, bringing smiles to our faces and adding sweatshirts to our attire.

Though we saw a few darner dragonflies and even a meadowhawk, it was the green frogs that we spent the most time trying to spy for they blended in well with their grassy surroundings at the water’s edge.

A bit further out, and unfortunately beyond our reach, we spotted a bobber and fishing line. While it offered a picture filled with color and curves, the reality wasn’t so pleasant. 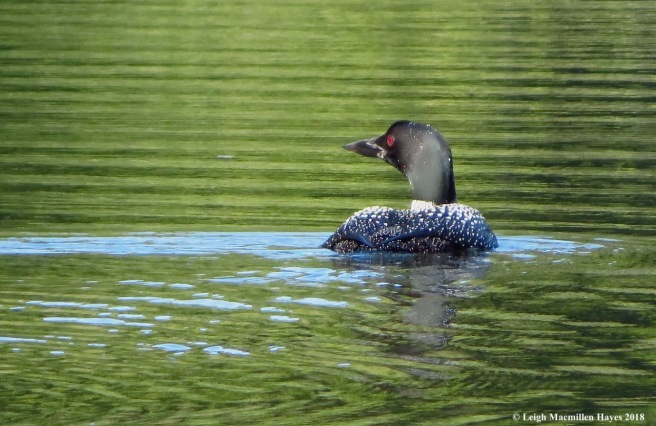 Nearby, this loon and a youngster swam and fishing line left behind is bad news for them as they could get tangled in it. Please, please, please, if you are near the Horseshoe Pond boat launch, and have the means to retrieve the bobber, do so. And if you are anywhere else in this world, do the same–for the sake of all birds everywhere.

At last, we pulled ourselves away from the pond and followed the brook that flows from it–Sucker Brook. 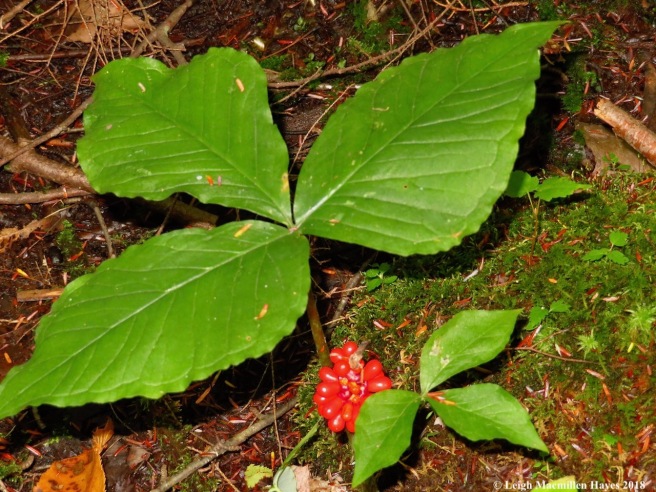 Right away, we were in awe of the Jack-in-the-Pulpit plants with fruits still intact. Jack is actually a curious plant and sometimes channels its feminine side. While the plant starts life as a male, if the soil is poor, it turns female, flowers and bears seed. It could turn male again. In the case of what we saw today, meet Jill.

As our journey continued, we noted fungi everywhere. Some had rotted and added to the earthy smell of the woods. Others displayed their unique structures, colors, and lines, including the Thin-mazed Polypore.

We also found at least one Black Earth Tongue, its common name reflecting its tongue-like appearance as it stuck up from the ground.

And in keeping with human body parts, we noticed a singular Dead Man’s Finger. But . . . its presentation offered questions we couldn’t answer. It was our understanding that on Xylaria longipes the young fruiting bodies would be covered with a whitish or gray powder in the spring. The powder isn’t really a powder, but rather the asexual spores of the species. So, did we find a confused youngster? Or was it an oldster parasitized by a mold?

Speaking of molds, we stumbled upon a log featuring a feathery appearance reminiscent of antennae on a moth or butterfly. Well, maybe a collection of antennae. A huge collection.

Turns out it was Chocolate Tube Slime, a new discovery for me. In his book, Fascinating Fungi of New England, author Lawrence Millman describes it as “dozens of erect, brown tubes mounted on thin, seemingly polished black stems.” Bingo.

Also appearing a bit chocolate in color was another green frog. And being the first full day of autumn, I began to realize that my time spent admiring amphibians and dragonflies will soon draw to an end. But . . . on the horizon . . . tracks and scat 😉 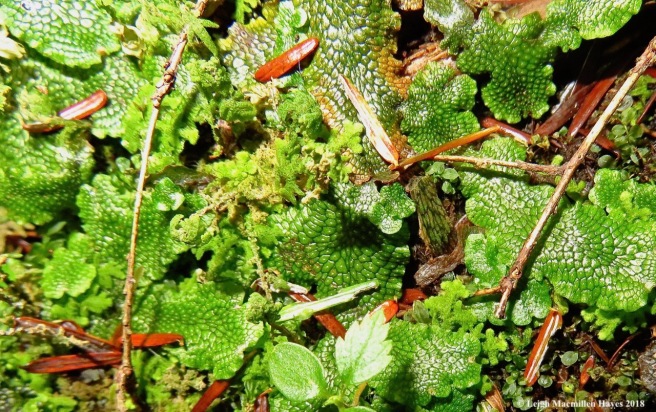 Because we were beside the brook, and we’d seen this species before, we searched each and every rock and weren’t disappointed. Conocephalum salebrosum showed off its snakeskin-like leaves.

The conspicuous grooves of the thalli on this liverwort defined the surface and gave it that snakeskin appearance. 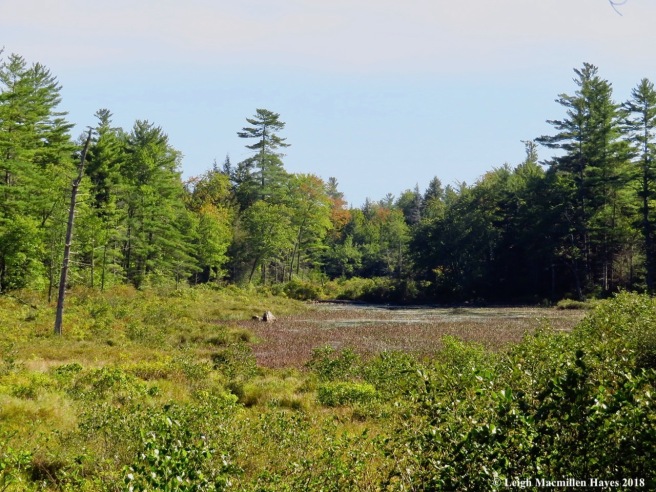 Continuing on, we finally reached the platform and climbed up to look out toward Moose Pond Bog. Of course, we hoped to see a moose. No such luck. We did spy one dog named Bella and her owner, Meg Dyer, the Lovell Rec Director, out for a Sunday walk in the woods. But they were on the trail below us and not in the bog. One of these days . . . maybe we’ll see a moose. When we least expect it, that is.

Back on the trail ourselves, our next great find–winterberries in a recently dug hole about four inches deep. Who done it? We poked the hole with a stick and determined that it didn’t go any deeper or have any turns, such as a chipmunk might make. Nor did it have a clean dooryard, which they prefer. Turkey? Perhaps. Squirrel?

We think we answered the question for on top of a tall hemlock stump that has long served as a red squirrel diner, some red winterberries appeared among the pine scales left behind.

Almost back to the road, we crossed the final bridge and then backtracked. We knew our destination was up the streambed it crossed over and were thankful that it held not much water. That meant we could climb up and take a closer look at the large boulders in the middle. And it was there that we made a new discovery.

You see, in the past we’ve not been able to get too close to the boulders and from a bit of a distance we were sure we had looked at more snakeskin liverwort. But our ability to get up close and personal today made us question our previous assumption. Suddenly, the gray-green leafy structure took on a more lichen-like appearance. Though its color wasn’t the same, it very much reminded me of rock tripe. 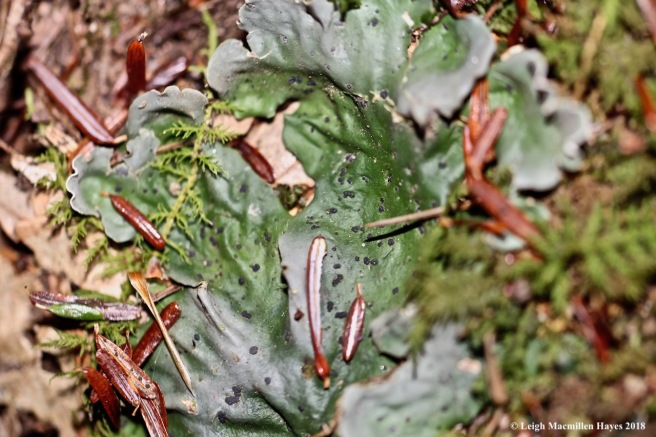 We studied its lobes and structure, including the tiny warts and questioned ourselves as we continued to examine it. I kept thinking it was an umbilicate based on the way it adhered to the rock substrate. 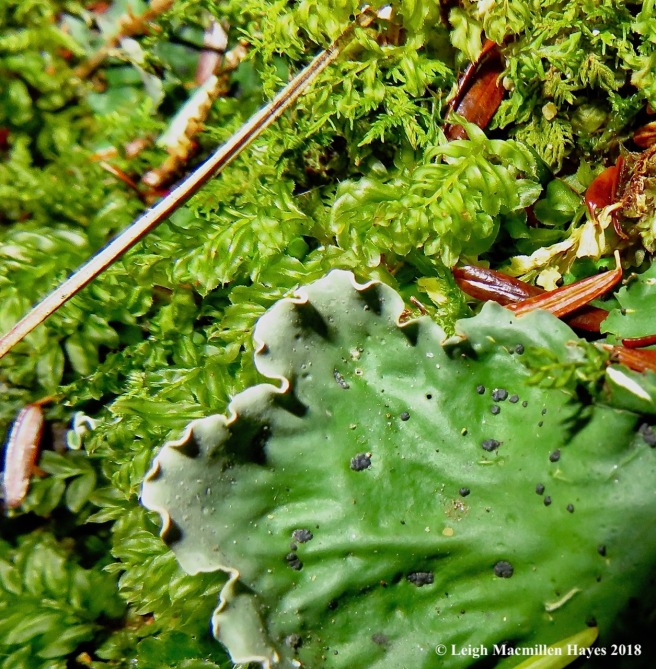 A little research and I think I’ve identified it correctly, but know some will alert me if I’ve assumed too much–Peltigera aphthosa, aka Freckled Pelt Lichen, also called Spotted Dog Lichen. The bright green center indicated it was wet. From borealforest.org, I learned that the little warts contain tiny colonies of cyanobacteria, which supply the lichen with nitrogen.

And right beside the lichen, we found a moss that also reminded us of a liverwort for it resembled Bazzania. But . . . if I identified this correctly, it’s Racomitrium aciculare. Some know it as Yellow-fringe Moss.

In his book, Mosses, Liverworts, and Hornworts, Ralph Pope described it as “common on wet rocks along streams and under waterfalls.” In watery seasons for this particular stream, that would be its exact location–under a waterfall. 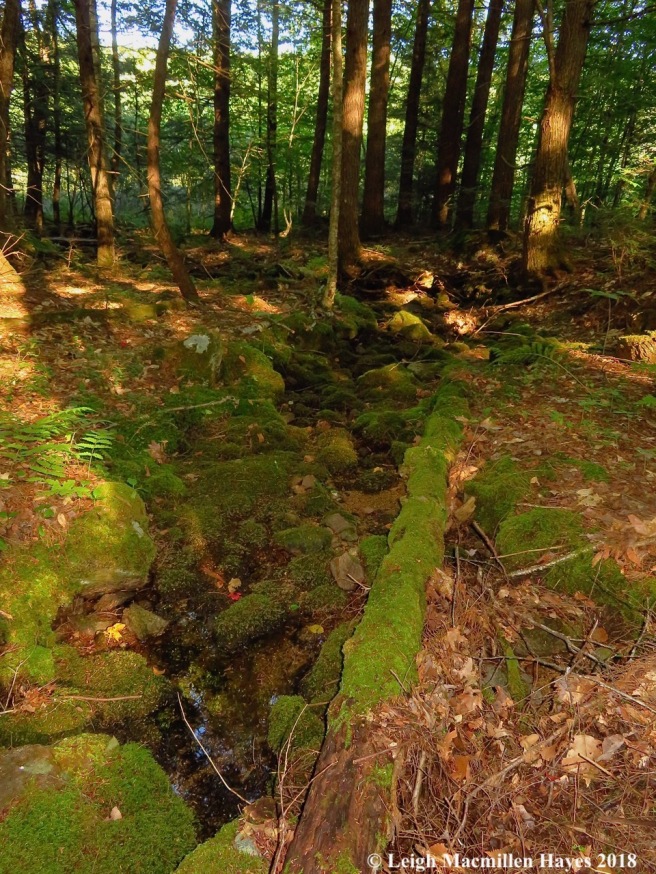 Today, the stream bed leading down to Moose Pond Bog and Sucker Brook was just about dry. But . . . because of that we were able to take a closer look.

In fact, it took us almost four hours to follow the mile or so trail, but it was all about taking a closer look through our 10X lenses and cameras, slowing down our brains,  and channeling our inner Nancy Drew as we paid attention to clues and tried to decipher the scene around us–all the while detecting the nature of Wilson Wing.

8 thoughts on “Detecting the Nature of Wilson Wing”