As I drove to Lovell this morning to take a photo for the Greater Lovell Land Trust’s winter newsletter, the crisp outline of a snow-covered Mount Washington made me realize that I had a short, unintended hike in my immediate future.

Yesterday, I’d climbed the Flat Hill Trail at the Heald and Bradley Ponds Reserve to take another photo for the newsletter–that one of the view from the summit of snow falling in the White Mountains. This past summer, staff and volunteers of the land trust had made some trail changes and opened several views, the one from Flat Hill being the most dramatic and the foliage, snow and sky enhanced the opening. But . . . today’s view was different and I knew I needed to capture it again.

So . . . after a staff photo shoot at the Kezar River Reserve of Stewardship Associate Dakota, Associate Director Aidan, and Office Manager Alice, I headed north.

And laughed at myself for yesterday I never noticed the yellow Voss blazes that had been mounted to mark the trail. The hope is that eventually all the trails will be signed with different colored diamonds that will ease navigation.

It’s a trail I know well, even with a new backwards S curve about two thirds of the way up that erased a steep and slippery portion and so instead I focused on those sights at my feet. While many leaves had already begun the long process of decomposition as they slowly break down and give nutrients back to the earth from which their trees grew, a few still sparkled like gems, including this Big-Tooth Aspen, aka poplar.

I was thrilled to discover Sugar Maple, defined by the U shape between its pointed lobes;

its V between lobes and toothier cousin, Red Maple;

and even toothier kin, Striped Maple, known ’round these parts a goosefoot because its shape is similar. Some of us also refer to it as nature’s toilet paper for it’s large, soft, and easy to identify. You wouldn’t think of confusing it with poison ivy.

The curious thing about the Maple family, like all families in our northern New England forests, is that while the shape and color of the leaf helps us specify the family origins, each leaf within the family is different–whether in color or flaws or insect bites or galls. But despite their differences, they are all family.

With the Striped Maple, I thought I’d found the largest species of the day, but a few more steps toward the summit revealed a rather large Northern Red Oak leaf.

And then the biggest of all–Basswood. My hiking boots are size 8. And the leaf–also a size 8, with an asymmetrical base. That must prove a challenge when trying to find the right fit.

Focusing on the leaves took my mind off the climb and within no time I’d reached the summit where Polypody ferns in their evergreen form decorated the northwestern corner of an otherwise bald rock.

From the ferns where I’d planted my feet, I looked skyward and noticed the leaf and flower buds of a Red Maple, all tucked inside their waxy scales. It was the right place to be for as the north wind blew and my cheeks turned rosy red, I looked to the west.

Yesterday’s view had been transformed. No longer was it snowing from the Baldfaces to Carter Dome, with Mount Washington the whitest of all, posing between them. But still, it was chilly.

A slight push on the camera lever and I pulled the scene a wee bit closer.

At last I pulled myself away and hiked down, but so delightful was the morning, that I knew my newsletter work would have to wait a few more minutes at the intersection with Perky’s Path, for I felt the calling.

It’s a wetland I visit frequently and once upon a time about five years ago it was filled to the brim with water because beavers had dammed it for their convenience.

The only water today was found in a small stream that flowed through, its origin at Bradley Pond and terminus at Heald Pond. I stopped at the rock stepping path to admire what the water had to offer, including suds forming their own rachis or mid-vein from which side veins extended, a sideways rendition for the birch leaf caught between twigs. 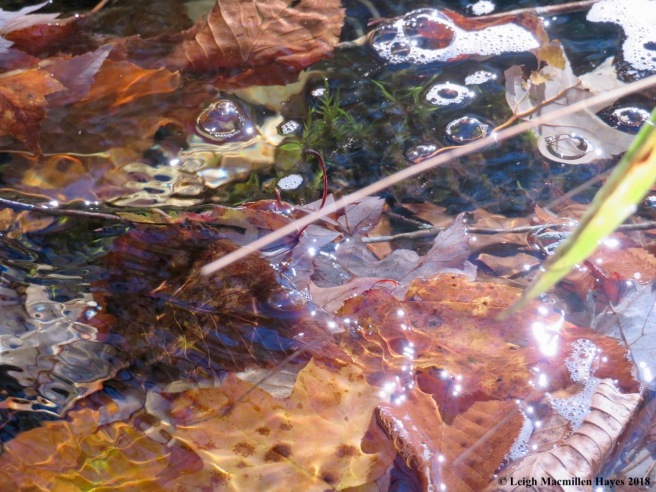 In the middle of the stepping stones is a large flat rock. It was there that I settled in for a while, enjoying the feel of its sun-absorbed heat and the sound and views offered as the brook flowed slowly forth.

At last I pulled myself away and continued toward the bench that overlooked the wetland. All was quiet on this brisk day, but its a place of life and love and change.

From there I continued to circle the old beaver pond to the point where I knew it had formerly been dammed. Climbing over and around moss-covered rocks, and into former stream beds, I made my way to the edge of what I used to call an infinity pool for the water was once at the dam’s upper level.

Once I reached the dam, making my way one step at a time, for it was rather tricky footing at times, I discovered life on the other side. For all the years I’ve been involved with the land trust, I’d never seen this edge from this view. My surprise included the almost bald rocks.

Stepping from boulder to boulder, I made my way into the wetland a wee bit, but along the way realized someone had visited prior to me. Actually probably almost a year prior given the conditions of the scat left behind. Based on its shape, size, and inclusion of multiple bones plus lots of hair, I suspected a coyote had feed on a hare.

The coyote and I weren’t the only ones who knew of this secret place. A wolf spider darted in and out among the leaves, more afraid of me than I was of it.

And then I discovered something that perhaps they both already knew: the water supported a small colony of Spatterdock, a plant that will need to be added to the list of flora for this property. Do you see the ice on the Micky Mouse ear leaves?

Ice had also formed around a fallen log, its swirls portraying a high-heeled boot that certainly might be appropriate in an ice sculpture but not on ice.

All of what I saw the tree spirit already knew. And yet, it allowed me to make discoveries from my feet to the sky.

And every layer between. I know he’s not there anymore, but can’t you imagine Marty Engstrom on top of Mount Washington?

10 thoughts on “What the Tree Spirit Knows”