Most people only hear “Gobble, gobble,” from a turkey. But listen carefully and you might hear something more. That’s what happened to one young boy.

You see, once, a long time ago, the boy and his father headed out for their annual turkey hunt. It was a raw and blustery November day with snow already on the ground as the two left home and traveled in different directions.

All morning, the boy followed turkey tracks in the snow. Exhausted, he sat to eat his sandwich on a rock sheltered by hemlock trees. Slowly his eyes drooped, but a sound suddenly startled him.

Quietly, the boy reached for his musket.

“What do you think you are doing?” asked the turkey.

“I asked, what do you think you are doing?” repeated the turkey. 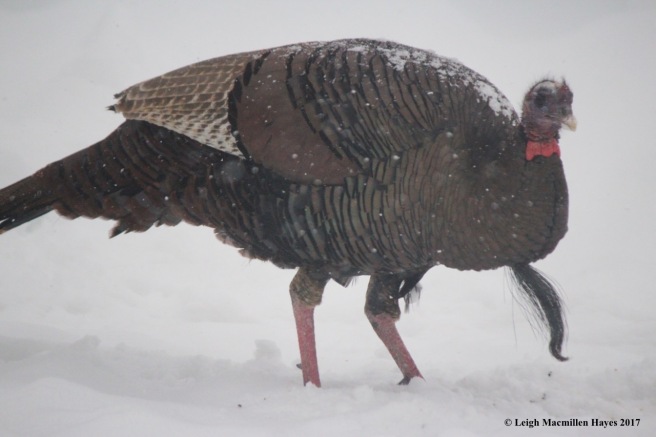 The boy shook his head. “Are you really talking to me? Or am I dreaming?”

“You decide,” said the turkey. “Oh, and I don’t think we’ve properly introduced ourselves. I’m Tom.”

“Well, Tim, what are you doing with that thing in your hands?” asked Tom.

“Me? Well, you’ve found me. But . . . wait a second,” said Tom as he ruffled his feathers.  “You’re not going to shoot me, are you? Oh, I know–you are supposed to bring back a turkey for Thanksgiving dinner, right? But did you know that the Pilgrims didn’t eat turkey at the first Thanksgiving feast? They didn’t have time to hunt. They were too busy harvesting vegetables, learning to fish, building houses and preparing for a harsh winter.  Massasoit and the others who introduced the feast brought venison. So . . . if you want to help put the tradition back into Thanksgiving, I suggest you turn your attention toward deer or fish or just eat vegetables. Besides, think about my surname: Meleagris gallopavo, the scientific nomenclature for wild turkey. Such an impressive name certainly proves my importance.” 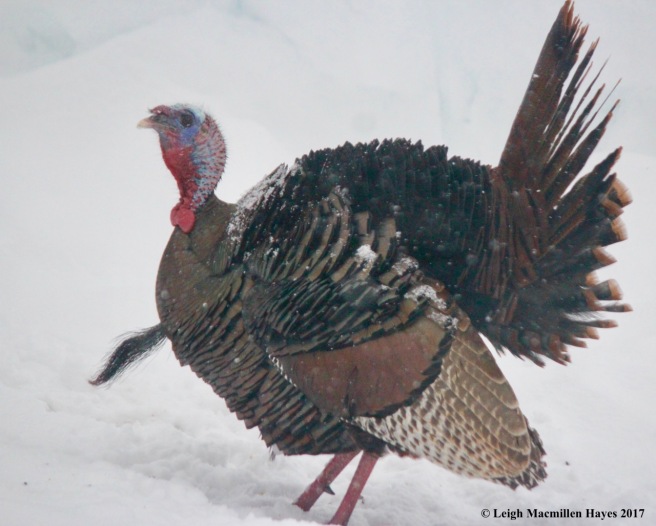 Just then, they heard Tim’s dad approach. Tom went into full display, gobbled quietly, and waddled back under the hemlocks.

“Tim, did I hear you talking to someone?” asked his dad.

“Oh, well, did you spy any turkeys? It looks like there are lots of tracks around here”

“No turkeys in sight right now,” said Tim. “But I was thinking–what if we eat fish instead of turkey this year?”

“Yeah, fish,” Tim said as they walked home. “I don’t think the Pilgrims actually ate turkey. That’s a bunch of gobbledygook. We should have a traditional meal this year.”

They turned a corner in the trail and Tim glanced back for a second. Tom winked from his hiding place under the trees. Tim winked back.

And all lived happily ever after, always enjoying the Thanksgiving feast–with fish as the main course some years, and spaghetti other years.

Happy Thanksgiving dear readers! And on behalf of the Meleagris gallopavo family, I seek your help to save them from being roasted yet again.

9 thoughts on “A Bunch of Gobbledygook”