“Even if the conditions weren’t great for tracking, it was still fun to get out,” said Gilda, one of the newest Greater Lovell Land Trust Trackers as we explored off trail today. Mind you, it was -11˚ at daybreak, and the temperature registered in the single digits when we all met at Lot #1 of Heald and Bradley Ponds Reserve.

Not too far along the Chestnut Trail a trough extending from both sides drew our attention. We split up and followed it in either direction trying to determine the creator. Deer? No, not deep enough in the fluffy snow. Coyote? We kinda sorta saw the footprint and perhaps the pattern, but why the trough? Fisher? We were almost certain it was for we convinced ourselves that the vague prints were on a diagonal and the critter had bounded and slide across the landscape. It seemed to be characteristic of a weasel family member. But would a fisher slide that much? We’ve seen occasional slides but this was consistent. Porcupine? Now that didn’t occur to us and as I looked at the first photo I took I thought why didn’t I think of that. I know that the summit of Flat Hill is covered with porcupine tracks and dens. We were at the base. Just maybe what we saw was the trough of a porcupine. As it was, we spent a lot of time questioning our observations and blaming it on the snow for not providing us with the best tracking conditions. Someone mentioned that I should have kept track of how many times I said, “I don’t know.” Perhaps tracking those three words would have provided us with a higher success rate.

What I did know was that when we reached the stream and noted that the mystery trough maker had crossed to the other side and we didn’t like the looks of the ice and running water below and chose not to follow suit, we did spy some prints with a pattern we all knew to be coyote based on the size, X between the foot pads, and nail marks. Actually, we thought a family was on the hunt. Perhaps for a porcupine?

All in all, we did find vole and mouse tracks, and later some that we were 95% sure were fisher, and domestic dog. But like Gilda said, it was fun to be out on a brisk winter day in a beautiful location as we shared a brain and tried to figure out the stories in the snow.

These trackers were as intrepid as those I traveled with year ago and the article that appeared in today’s Bangor Daily News was based on a similar adventure last year. Well, let me clarify that. It was similar in that the temp was 4˚, but if I recall correctly it must have been windy for it felt even colder. And the tracking conditions were pristine that day.

Thanks once again to Aislinn Sarnacki of the Bangor Daily News and “Act Out with Aislinn” for giving me the opportunity and making it all happen.

At the nudging from one of the founders of the Maine Master Naturalist Program, Dorcas Miller, I submitted an article to the “Act Out” section of the Bangor Daily News.

To my pleasant surprise, it was accepted. (And they’ve asked for another–yippee!)

Many, many thanks to Aislinn Sarnacki of the Bangor Daily News and “Act Out with Aislinn” for making it all happen.

The initial email was sent by Mary Jewett of Lakes Environmental Association in Bridgton, Maine, on Tuesday:

Many amphibians have already crossed and laid eggs but there are still some waiting in the woods. Tomorrow evening looks like it will be perfect conditions for an amphibian migration and I would like to get a group together to go out with me. My plan would be to meet at the office at 8pm. With sunset being at 7:40 I really wouldn’t want to start any earlier since the frogs and sallies won’t move when it’s light out.

I want to get an idea of who would be able to come out with me. I have a reporter and videographer coming out from the Bangor Daily News and they would like to get shots of actual people (not just me) and possibly get some quotes from participants. I know that it’s tough to get out with kids since it starts so late but I hope that we can get a diverse group. We also may have the opportunity to check out egg masses that are already in the water!

And then this afternoon, Mary sent this follow-up message:

I have heard from a handful of people who are able to come out tonight so I’m going for it. Here are some details:

Meet at the LEA office building (230 Main Street) at 8pm
We will caravan up to the Masonic Hall and walk to Dugway Road from there.
Bring high powered flashlights/headlamps
Wear warm clothes and rain gear. It looks like the rain may be pretty heavy when we are out there. Good for amphibians but not so great for people trying to stay dry.
Wear reflective clothing if you have some. I have vests available if you don’t have your own.
Do not wash your hands with soap or put on hand lotion or hand sanitizer.
I have spoken to the police and they are going to try and send someone out. They have a training program this evening so we might not see them. This makes it extra important that kids stay with their parents at all times! 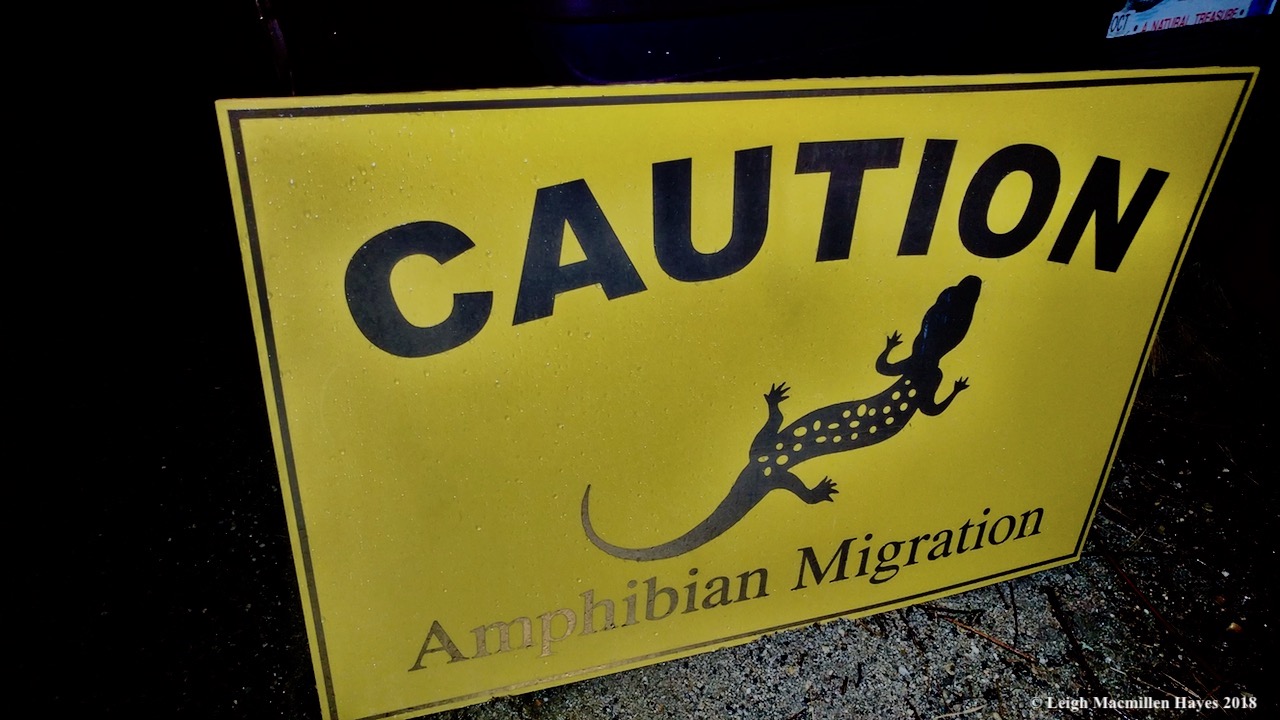 And so we did just that–met at the LEA office first, and then moved on to the Masonic Hall to park before beginning our journey into the wet and wild world of the amphibians. 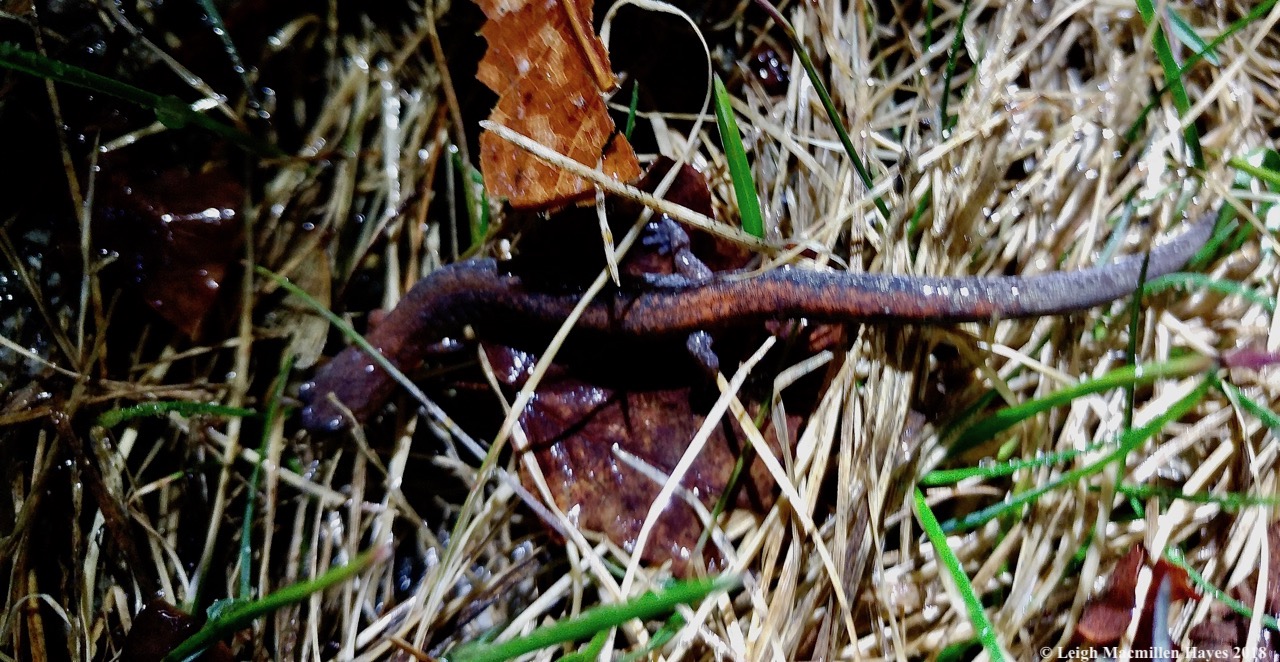 Right away, we noticed worms. And even better, a red-backed salamander. Red backs don’t use vernal pools to mate, but they sure do love rainy nights that offer great opportunities to roam about seeking food. 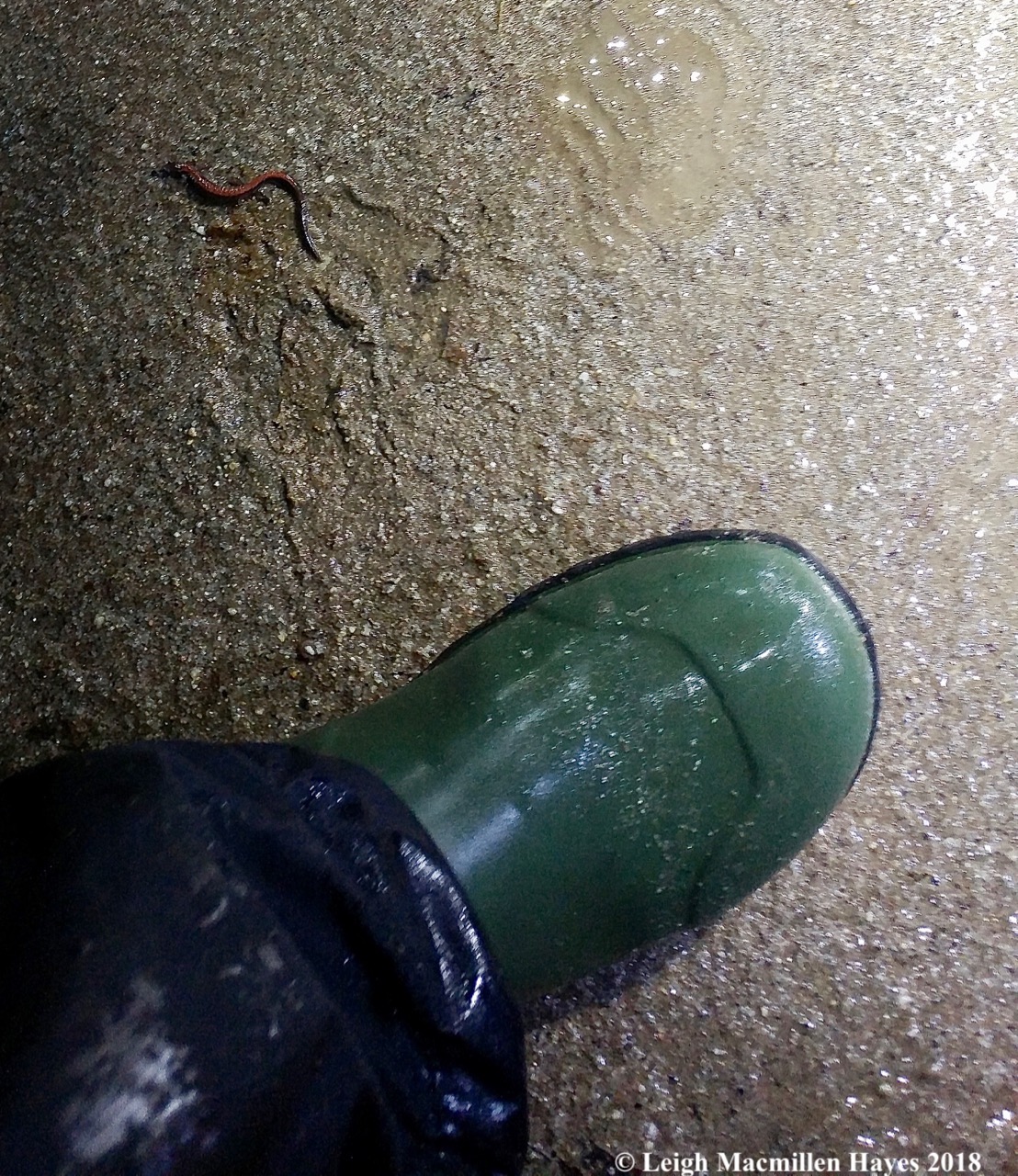 We crossed the field from the Hall to Memory Lane, our eyes ever looking for more redbacks, but instead we noted a kazillion worms, each the size of a young snake. And then, after only a few minutes on the road another redbacked graced us with its presence.

Finally, we reached Dugway Road, our destination, and Mary took a few minutes to remind folks of safety rules. Some years the Bridgton police are able to join us and either shut the road down or at least slow traffic. Such was not the case tonight and so it was important that our crowd of at least twenty ranging in age from four years old to 70+ be cautious.

And then the real fun began. We spread out across the road with flashlights and headlamps, walking with care as we tried to notice the little things in life who chose this night to return to their natal pools in order to mate.

Right away, the good times got rolling as we began to spot spring peepers. Really, it was those with eagle eyes who spotted the most, which wasn’t easy given the asphalt conditions. Though we knew better, we did have to wonder if the amphibians chose this road because it provided good camouflage.

Being the first of the night, Mary demonstrated the fine art of capturing the peeper, explaining first that her hands were damp and had no soap or cream upon them.

Outstretched hands of one of the younger set awaited a transfer.

The mission was to help the peeper get to the other side of the road. Typically, once captured, we transport them to the side in which they were headed.

The release was made into the youngster’s hands and then onward the child holding frog went. Lucky for the frog, there was a culvert at the side and that seemed like the safest place to release it.

Further down the road, the songs of the wood frogs and peepers were almost deafening. As we looked into the vernal pool that was still half covered in ice, there was some movement, but the frogs all continued to sing despite our presence, unlike what happens when we approach a pool during the day and they dive under the leaf cover for a few minutes.

We found enough peepers, but the stars of the night were the spotted salamanders.

The youngest among us picked up one of the ubiquitous worms that marked the night and laid it down beside a sallie.

Sallie didn’t care. It was on a mission and just wanted to move on without our interference. There was only one thing on its mind and we suddenly stood between it and that goal.

It had a dance to perform before the sun rose and we had a heck of a nerve for getting in the way. I’m always in awe of these creatures who spend at least 11.5 months under the leaf litter and maybe a week or two in the pool. Our rare chance to catch a glimpse of them is on such a rainy night as tonight.

Our intentions were in their favor. We only wanted to help save them from the vehicles that passed by.

In the end, though, I had to wonder–is this what the salamander’s world looked like as we scooped it up and helped it across.

Possibly, but still, it’s always a thrill for tots, tweens, teens, and all the rest of us to celebrate Big Night with the Lakes Environmental Association. We are the Sallie Savers.