As my friends know, I’m not one to say no to an invite to explore their land. And so this afternoon’s adventure found me spending time with Beth on the 100 plus-acre property she, her husband and parents call home in Oxford County.

Their sense of place begins with a field of wildflowers yet to come, the entry to their wood lot and a view of Ragged Jack Mountain. My sense of excitement to explore their place was heightened by this jumping off point.

Trails loop throughout the property and the family has taken the time to name and label all of them.

We wandered along and suddenly Beth noted that we’d reached their champion pine. I looked at a small spruce before us and wondered what all the fuss was about. Then she pointed to my left.

One massive Eastern white pine gallantly towered over us. At some point in its early life the terminal leader was injured–perhaps by a weevil or weather. But . . . this tree carried on and continues to do so. I felt like we were standing below a giant in the woods.

It’s characterized by layers upon layers of bark. 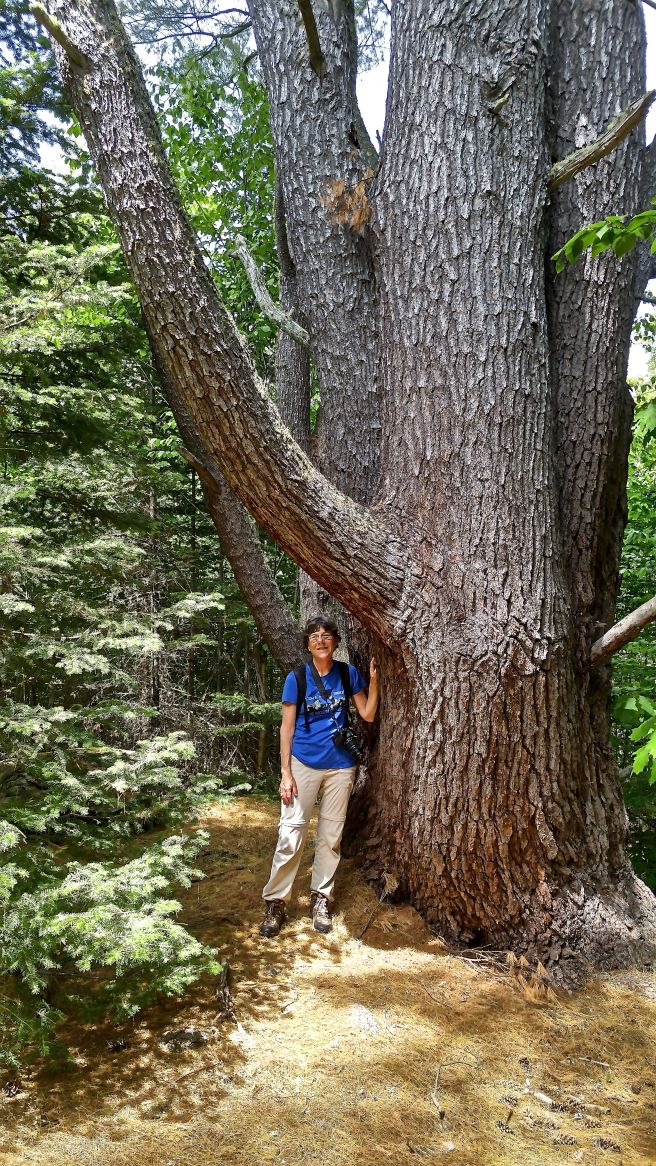 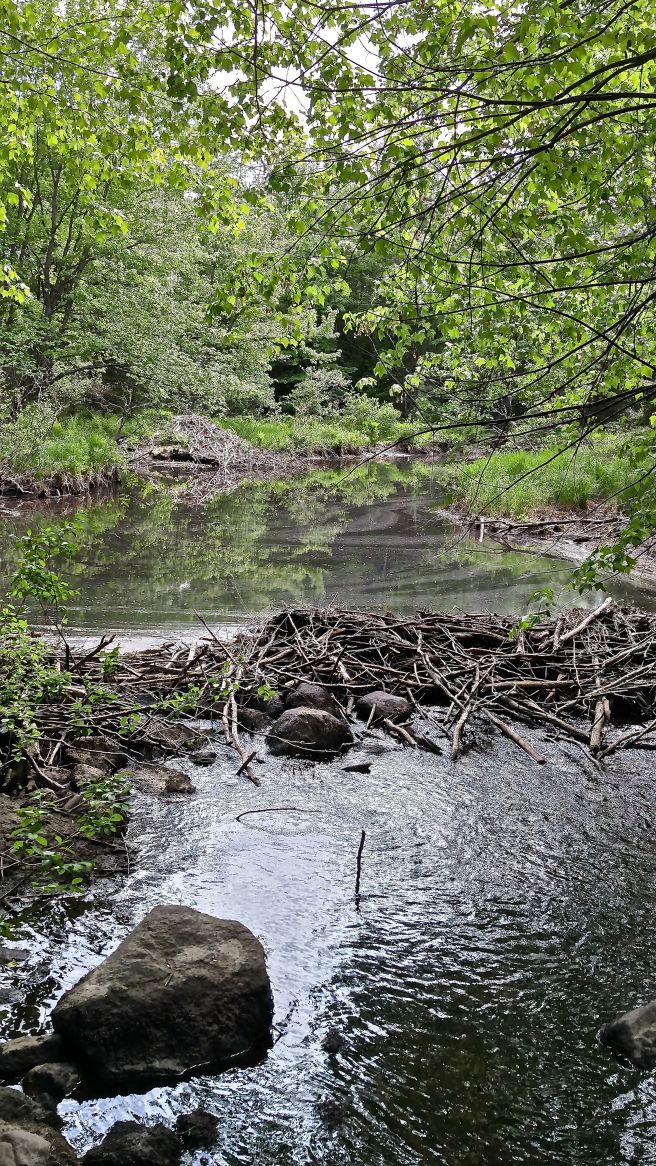 We weaved our way along the trails and Beth shared favorite spots with me as she told tales of her experiences with this land and water.

Mara, Beth’s springer spaniel, shared her own tail. She was happiest when mud and water provided opportunities to play. We had to wonder other times when she cowered behind us or tried to hide between Beth’s legs. What did she sense that we weren’t aware of? We did hear a few critters, including baby grouse that Mara visited, and saw the tracks of moose and deer, plus coyote and fox scat, and maybe even bobcat scat, but our only official mammal sightings were red squirrels. 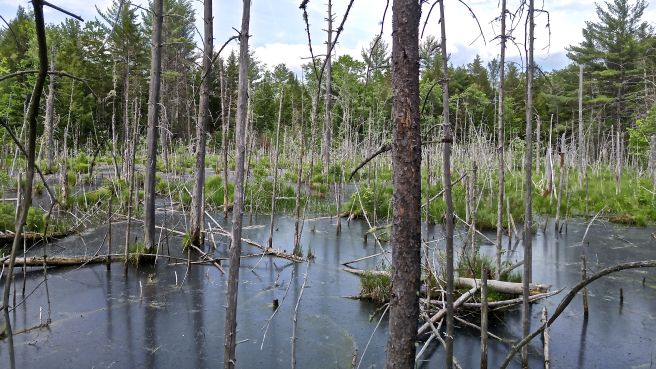 Among Beth’s sharings was this spot she refers to as the Accidental Pond. Accident or not–it’s enchanted.

Here and there throughout the woods, she pointed out glacial erratics. This one we particularly wondered about. What came first? The rock split on its own or the hemlock caused the split?

Those were the big things, but we were equally wowed by all the small stuff we saw along the way, like this bracken fern just beginning to unfurl.

And then something else caught our attention–a green caterpillar on the fertile frond.

We weren’t sure who it was, but we saw it on several stalks. Always something to wonder about.

Royal fern also offered a display, especially beside the brook. Look closely and you might find the fertile frond “crown” on this one. It’s a rather “Where’s Waldo” presentation, but it’s there.

We found some gilled mushrooms we also couldn’t identify, but appreciated their existence. 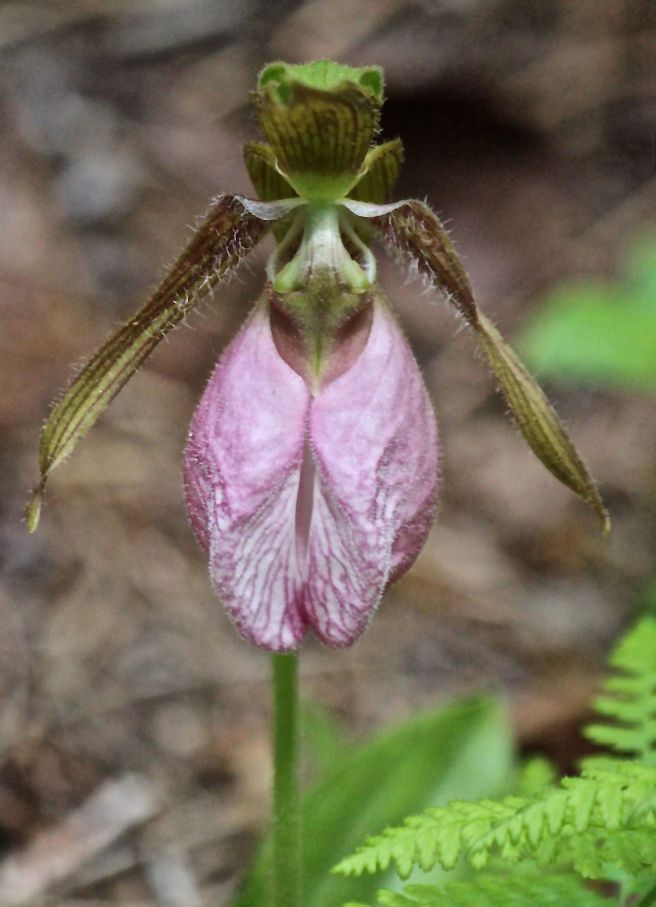 The lady’s were in bloom. 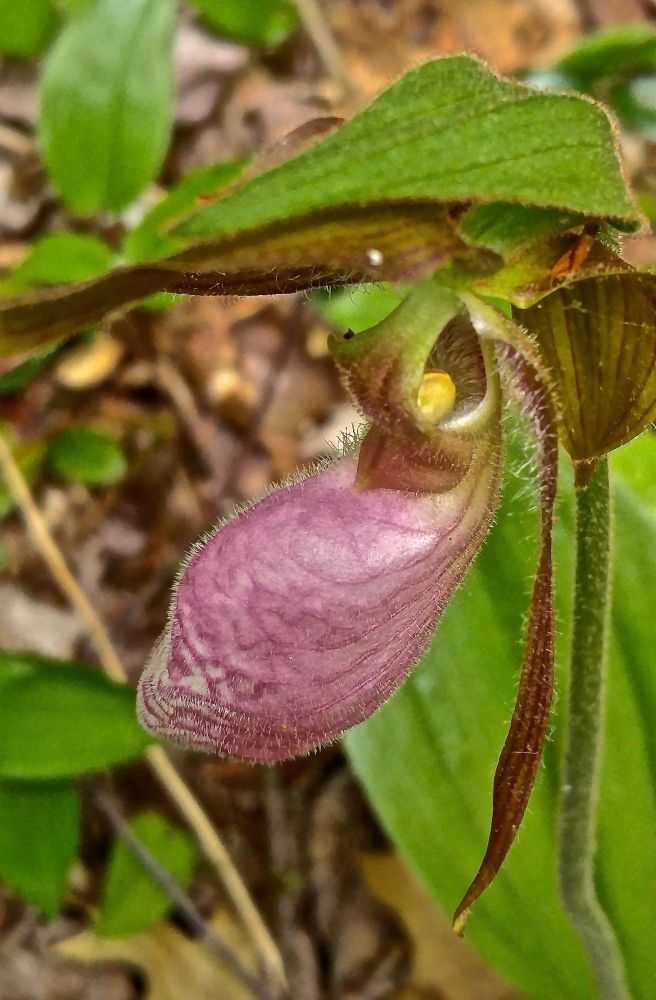 Take a look at those hairs. 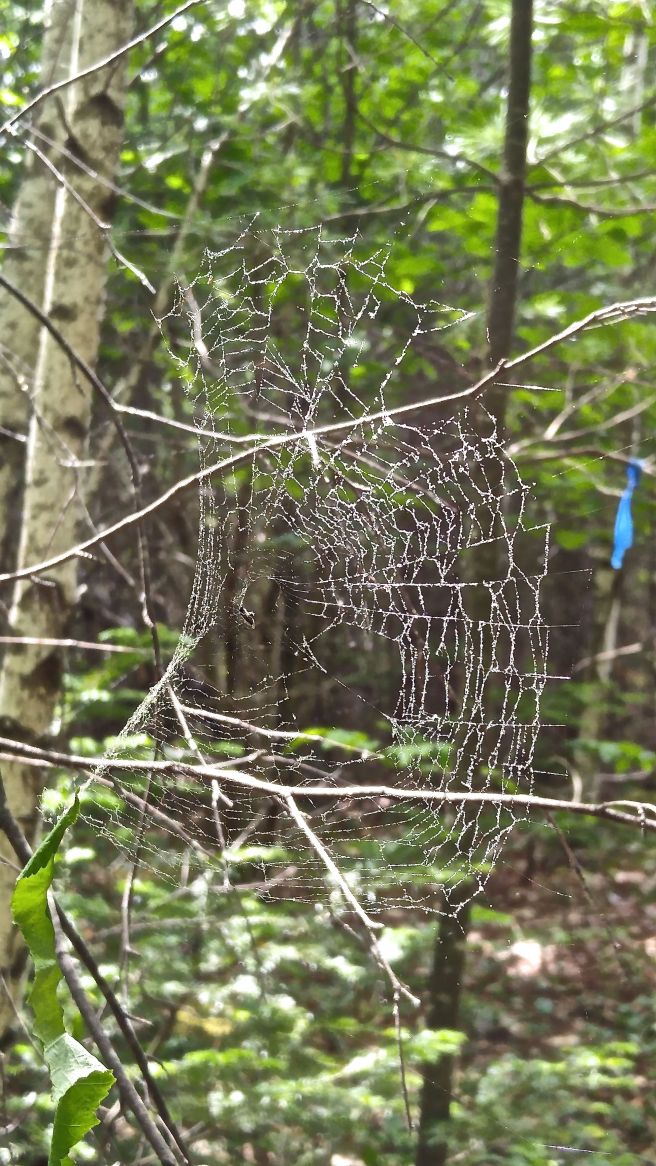 And it’s spider web season so we paused and admired the work of an orb weaver who built a spiral wheel-shaped web.

Also among our sightings, a well-built high-rise structure woven among the remains of winter weeds. 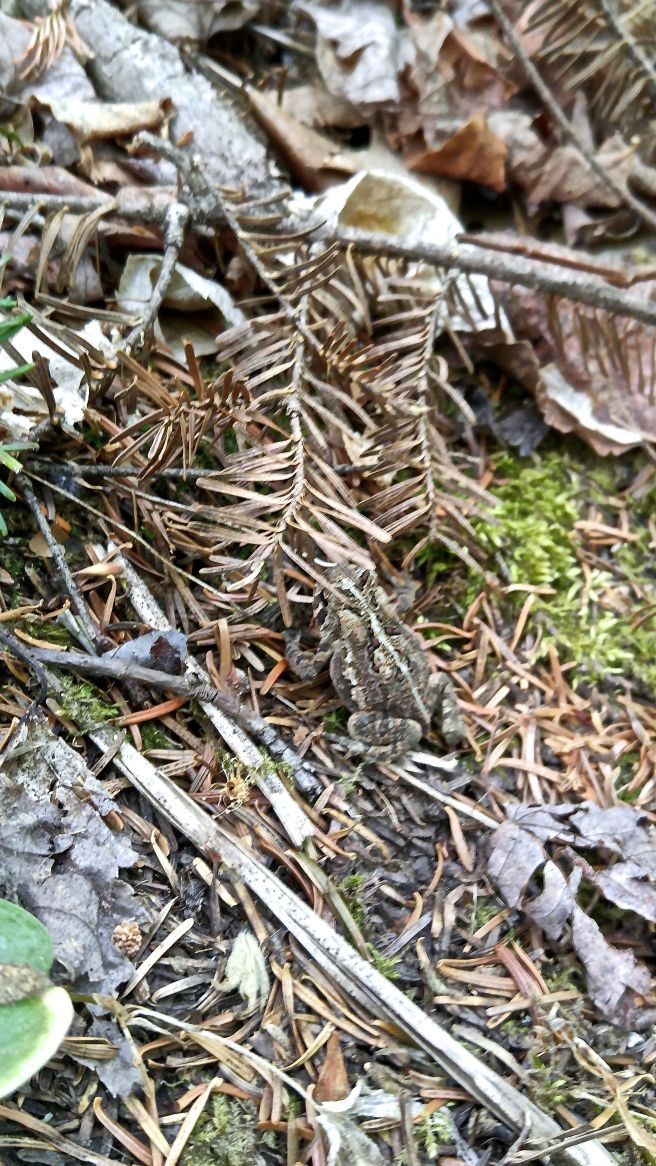 Camouflage is everything. Just ask the American toad.

We found the wood frog easier to spot.

But I had my eye on the blue-eyed grass.

These are the shy ones. They only keep their eyes open if the sun is shining. On a cloudy day it’s almost impossible to recognize them.  And they love damp open woods, slopes and stream banks so it’s no wonder we found them today.

The big and the small . . . Beth’s property has it all. And this was only a sampling from her hundred acre wood. Winnie the Pooh and his friends–they too, would love this place.

It’s Monday. Time for a Mondate. But this morning, we each went our separate ways. He to run and then cut some tree limbs in the yard. Me to meet up with a friend and explore a nearby reserve. 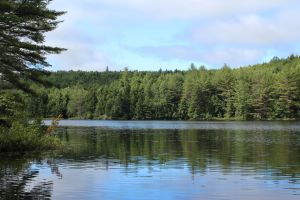 I’ve visited this secluded spot three times, all within the last two weeks. And each time I spy something different.

The fragrant water lilies are beginning to bloom. They remind me of dainty china teacups.

Near the water’s edge, a pink candy-crystal gall–I’m not sure of the actual name or creator because I’m still trying to identify the shrub. What causes the color?

Bushwacking always means great finds like this beaver works. There are several lodges on the pond. 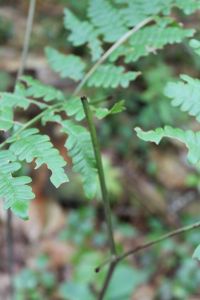 We were surprised to discover that something had been munching on the bracken fern. As ubiquitous as the plant is, we don’t often see that anything has consumed it.

White-tailed deer are about the only species that can tolerate bracken fern, which can poison some mammals. It produces a chemical thiaminase that prevents cows and sheep from metabolizing thiamine–they get sick and become disoriented. Cornell University’s Department of Animal Science Web site explains it this way: “When ingested, these enzymes split thiamin (Vitamin B1), an important compound in energy metabolism, and render it inactive.”

Here’s the good news about the fern–turned upside down, it makes a great summer hat and may keep mosquitoes off your head as you walk about the woods. 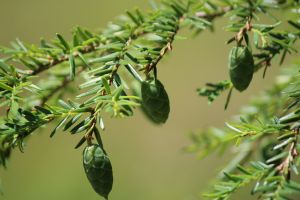 Petite green cones dangle from the ever graceful hemlock trees.

One last view before we headed back down the long and narrow dirt road–baby phoebes all in a row. 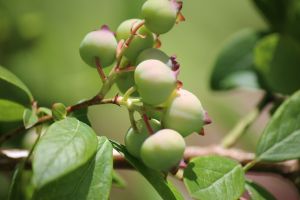 At home, I wandered for a few minutes. It won’t be long before we’ll enjoy these.

The trumpet-like flowers of digitalis–aka foxgloves. OK, so these are also poisonous to humans, cats and dogs. Yeegads. So beautiful and yet . . . 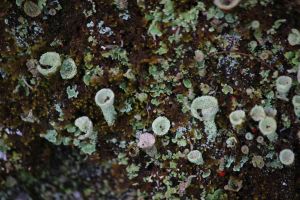 A miniature world on the stone wall deserves a longer visit, with journal and colored pencils involved. I shall return to this spot to sit for a bit.

At last, I joined my guy for our Mondate. 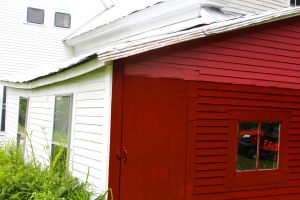 We’re painting the barn. Starting on the back side of the attached shed, we’ve primed it and late this afternoon I began using the actual color. You can see how high up I could reach. This isn’t the color the rest of the barn will be–but it’s so close you’ll never know the difference, unless I tell you. Oops, just did.

Yup, this was one red hot Mondate. And it looks like there will be more to come.

My friend, Jinny Mae, was recently blindsided by a dreaded diagnosis. It has slowed her down significantly, but today she was with me in spirit as I walked along the Homestead Trail/Gallie Trail at Heald and Bradley Pond Reserve in Lovell, and then headed to the summit of Amos Mountain.

What would Jinny Mae see? That became my mantra along the way. I love to explore with her because she makes me slow down and take a closer look. She asks questions. She is incredibly knowledgable about the natural world. And even more so about the historical context of our area.

It was a beautiful afternoon and the mosquitoes were almost non-existent. I felt Jinny’s presence in the breeze that kept the biting insects at bay.

And I knew the Interrupted Fern would draw her in for a closer inspection.

As would the fertile frond of a Cinnamon Fern–and a dragonfly.

She’d love the juxtaposition of a young Bracken Fern beside an older one.

Then there was the wooly texture of the Common Mullein leaves begging to be caressed.

Jinny Mae and I have explored these foundations before, so I needed to stop by again.

And I knew that she’d marvel at how this hemlock tree has grown among the rocks and bricks.

The Homestead Trail comes to an end at the handicap-accessible picnic area. And here the Amos Andrews Trail begins.

It’s a bit of an uphill climb, though not steep. For Jinny Mae, I’m thinking positive thoughts that her experience will be uphill all the way. Chin up, girl. You can do this. You’ve already amazed me with your attitude. May I strive to be half the person you are. 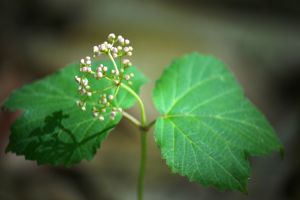 There’s more to see like this Maple Leaf Viburnum, 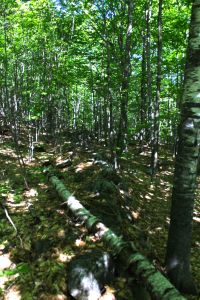 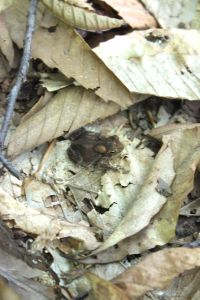 and a young American toad. 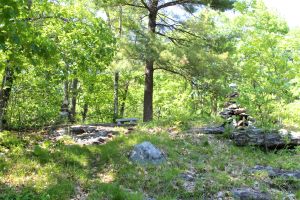 At last I reached the summit. 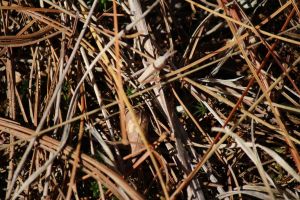 Again, I looked around and wondered what Jinny Mae might see. Despite its camouflage, I knew she’d find this walkingstick insect. The woman has eagle eyes. 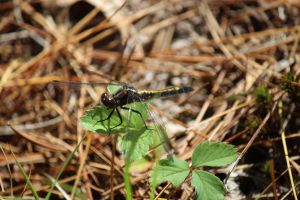 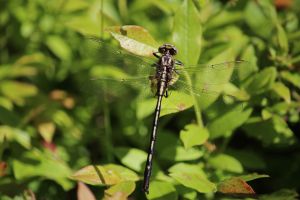 Maybe a more apt description is dragonfly eyes–with 30,000 lenses, they can see all the way around.

Not to be overlooked, a damsel fly. 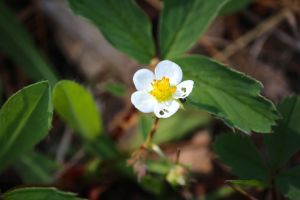 Wandering about, I found Wild Strawberries 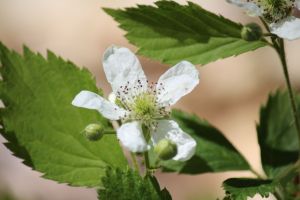 and Raspberries in bloom.

But I saved the best for last. Wild Red Columbine. I can hear Jinny’s happy sigh. I was going to pick it. Kidding.

She’ll be happy to know that I arrived back at my truck three hours later. Another three hour tour–somehow that always happens when we explore together, so I knew for sure that she was channeling this hike.

Here’s to you, Jinny Mae. I know you would have seen even more than I found along the way, so I can’t wait to hit the trail with you again.