“Will I need waders?” I asked before we departed from the Lakes Environmental Association’s office  early Wednesday morning.

Dr. Rick Van de Poll looked down at my hiking boots and said, “No, you should be okay if you don’t mind getting muddy.” 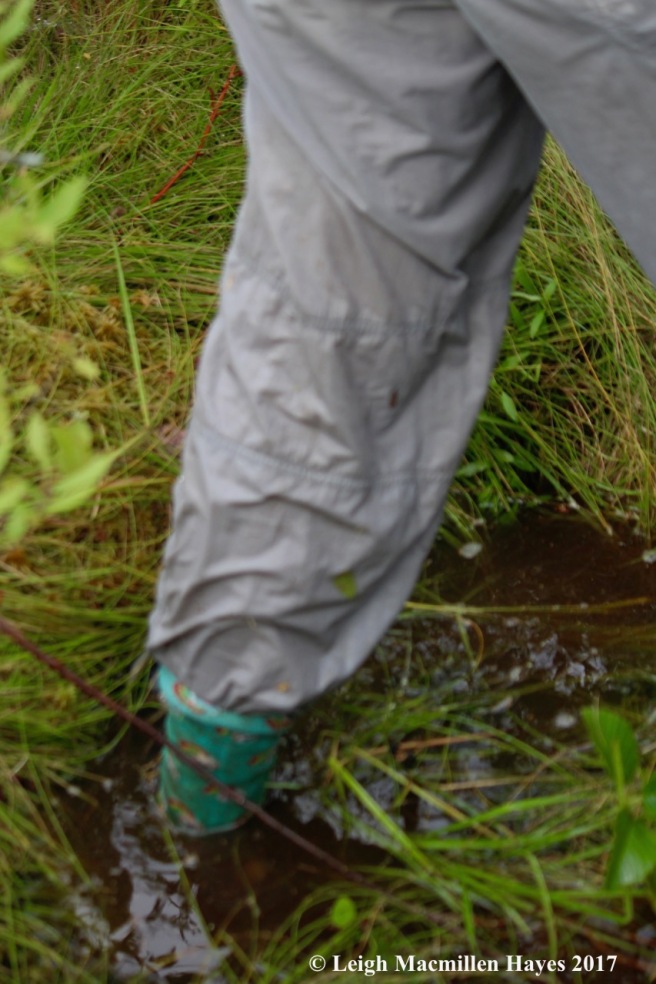 And so, LEA teacher/naturalist Mary Jewett and I joined him to begin a two-day survey of LEA’s Highland Lake Preserve. The 325-acre property was the gift of the David and Carol Hancock Charitable Trust. Except for two logging roads, there are no trails.

Our first destination was in the middle of the fen. OK, so Mary and I should have known better because we know how much it has rained this summer. But really, it was quite hot that morning and our feet did get wet.

In fact, she found a deep hole on the way in.

Once reaching the plot, our tasks were several.

We helped delineate the boundary with measuring tape and flagging, the first being 10 meters by 10 meters, and then found the center, thus creating four quarters.

Under Rick’s patient guidance and teaching, we began to survey the site, section by section, while he recorded our findings.

Trees were first and needed to be measured to make sure they were trees after all, and not considered saplings.

Layer by layer, including shrubs, 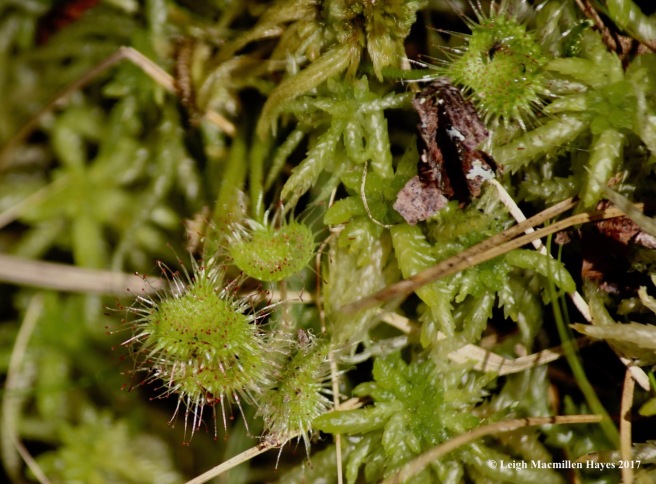 we made our way down. 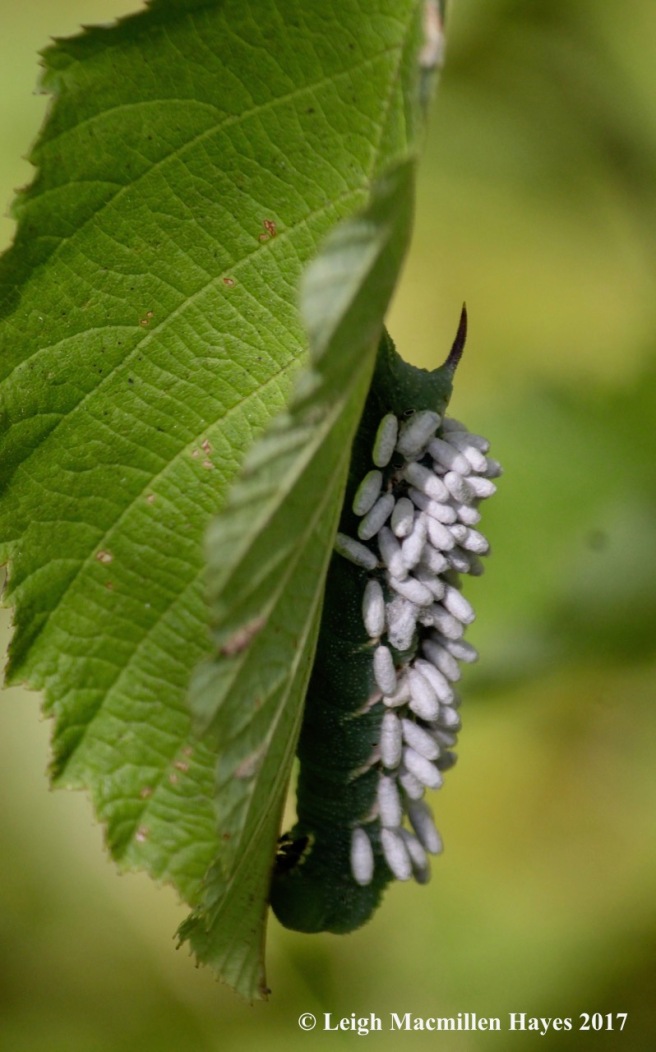 Along the way, other discoveries presented themselves, including wasp pupae on a hornworm, 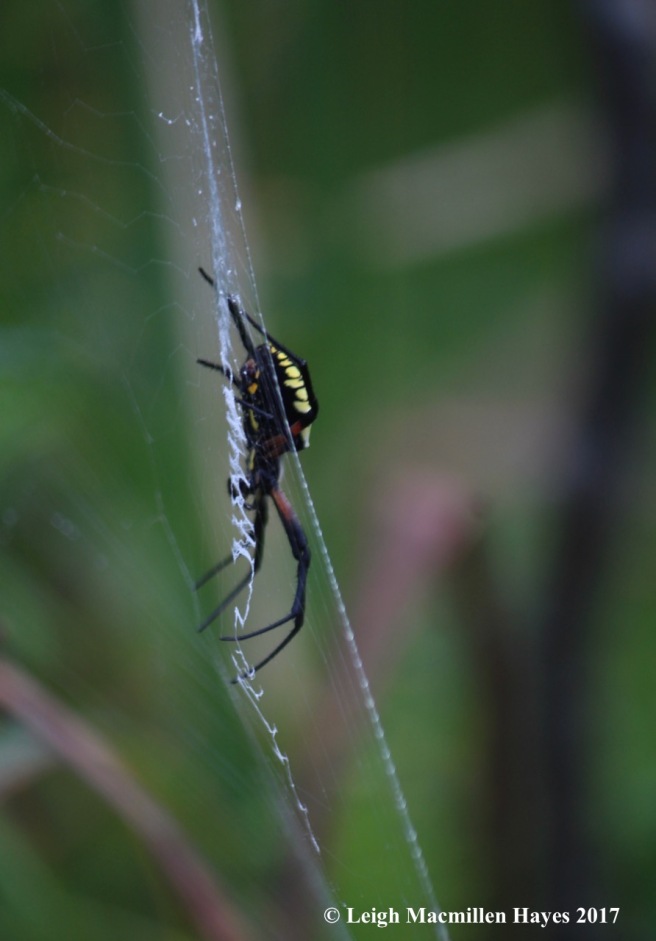 up to the measure,

and of course, green frogs.

Four hours later I found a deep hole as we departed that plot. We slogged out, water swishing in our boots, and quickly ate lunch. 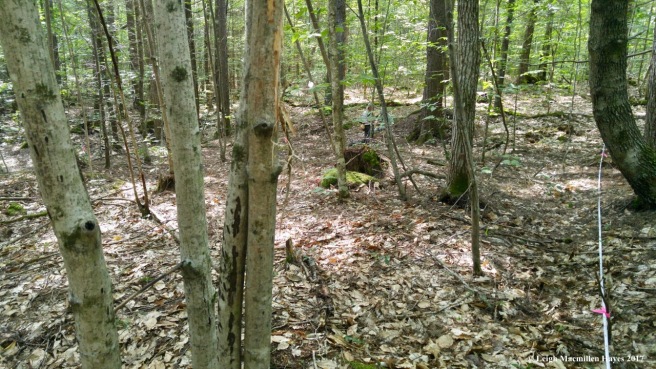 This plot was 10×20 meters and so within we had nine smaller plots to examine in the same manner.

Though we identified all the species from top to bottom, we also noted more cool finds like squirrel chews on a striped maple, 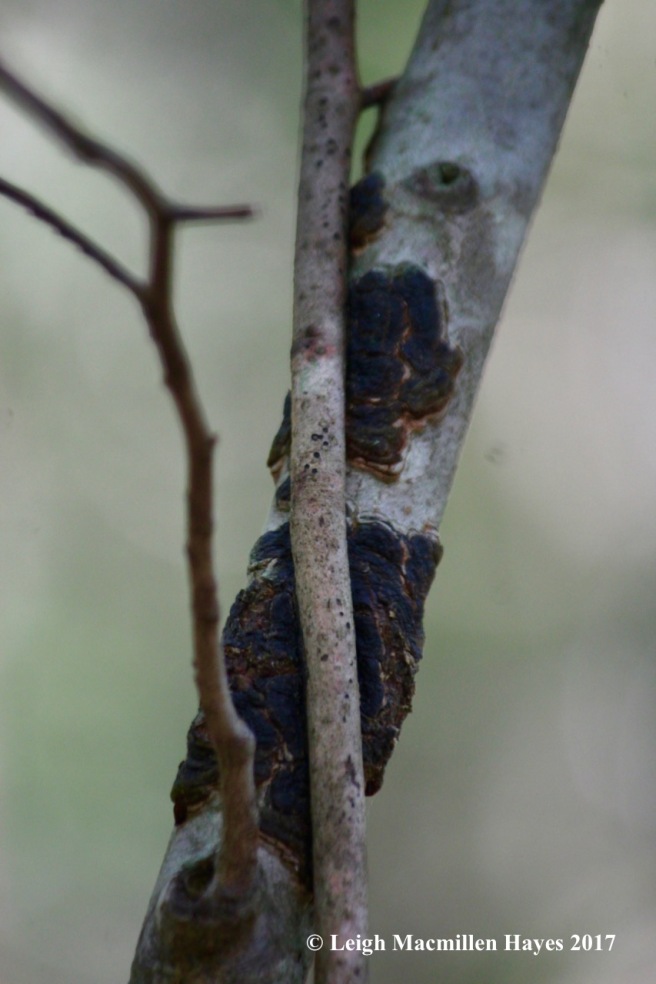 a crust fungus that acts like a glue and attaches dead wood to live,

and spotted wintergreen, listed as S2 meaning this: “Imperiled in Maine because of rarity (6-20 occurrences or few remaining individuals or acres) or because of other factors making it vulnerable to further decline.”

I had to miss the Thursday morning session due to a GLLT hike, but met Rick and LEA’s education director, Alanna Doughty, as they finished their lunch. I think they extended it a few minutes as I was a wee bit late. This time, Alanna and I sat on the tailgate of Rick’s truck as he drove down a logging road–I, of course, held on for dear life, while she nonchalantly acted like it was a walk in the park. The best part of the ride was the smell of sweet-fern that our feet occasionally dragged over. And then our march began with a short trek through a wooded forest, before we reached the highbush blueberries and other shrubs that acted like hobblebush and made for careful movement.

The first afternoon site was in a black spruce bog and for once, I could confidently differentiate between black and red as they stood side by side–both by their colors, the black having a blueish hue, while the red was more yellowy-green, and their gestalt.

One of my favorite learnings from that plot was the difference between cinnamon fern and Virginia chain fern. Again, they were easy to ID by their colors, the cinnamon already dying back. But notice the similarities.

And then we looked at the back side. While cinnamon has a separate fertile frond that forms in the spring and then withers, chain fern’s sporangia are oblong and on the underside. 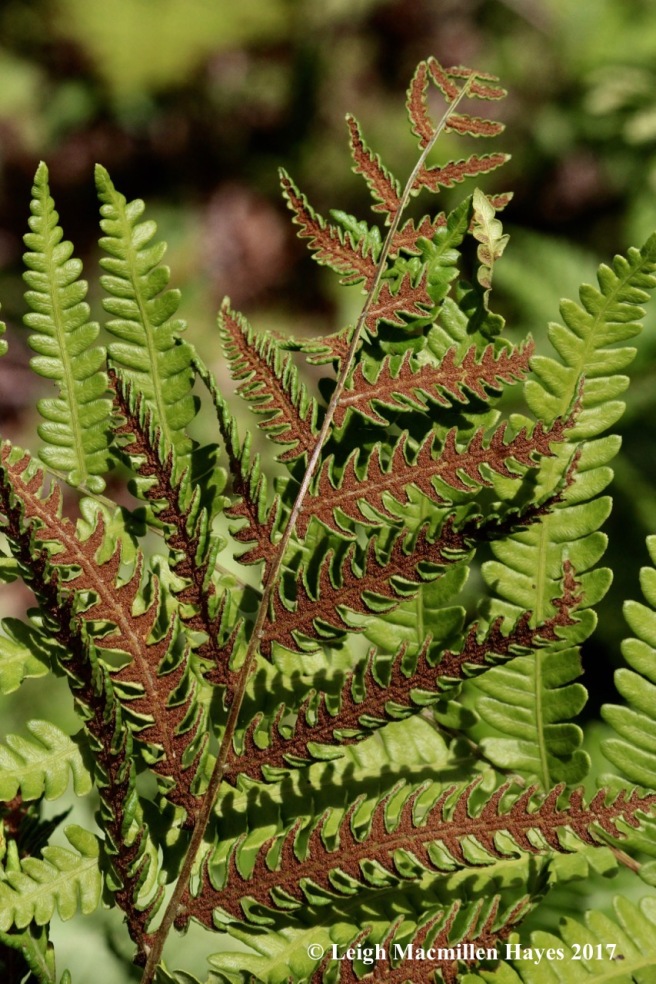 The area was thick with the chain ferns and our every movement meant spores flew through the air. 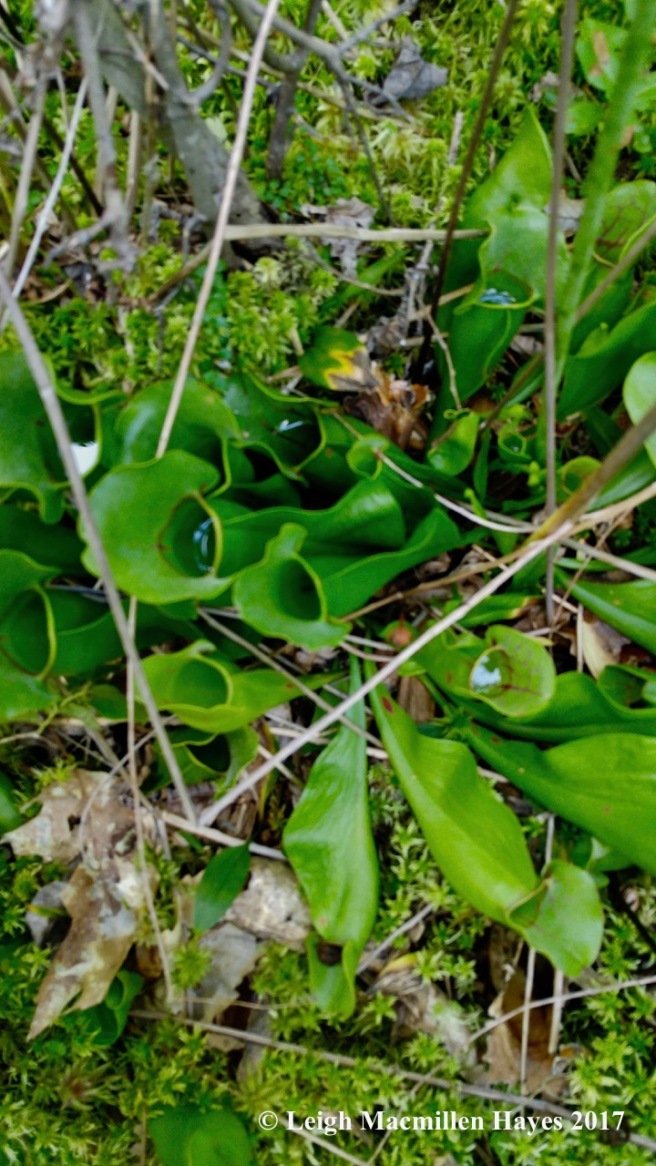 Every movement also meant we had to watch our every step, for so numerous were the pitcher plants. It was a great opportunity to ask Rick about the color of these–I’d been told that green is rare, but he said it’s just a matter of sunlight and age, all eventually take on a redder hue in veins and then overall leaf coloration as they mature.

Their flowers were also plentiful in this lush space. 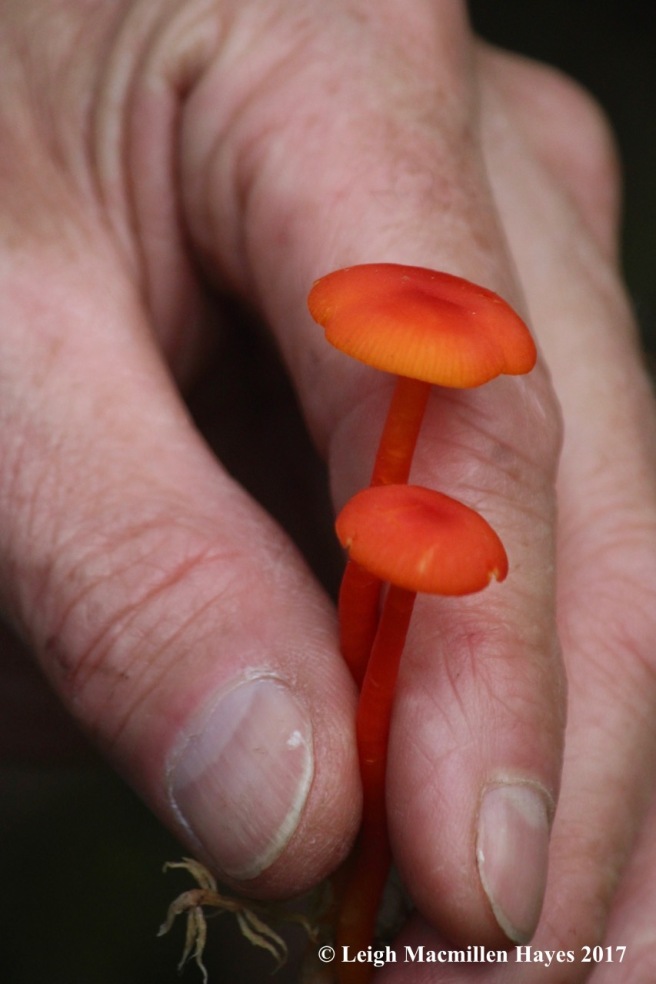 Among other things, Rick is a fungi expert (and an overall fun guy with corny jokes–the mark of a teacher), and so our learnings were plentiful, including these chanterelle waxy caps.

After making our way back out through the tangle, we hopped back onto the tailgate for a short ride and then headed off into a mixed forest for the final 10x 20 plot. 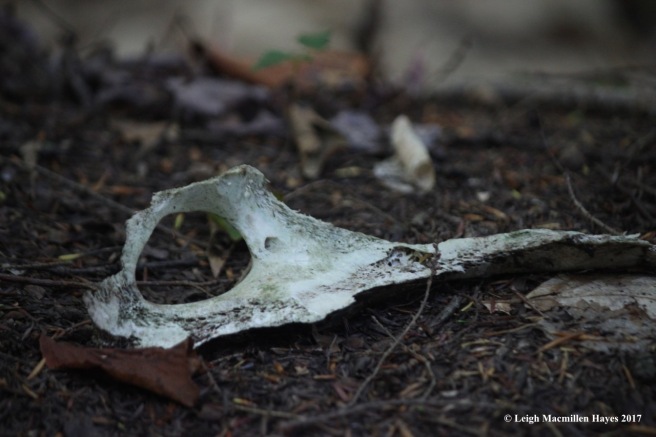 Our cool finds in this one included a much gnawed skull, 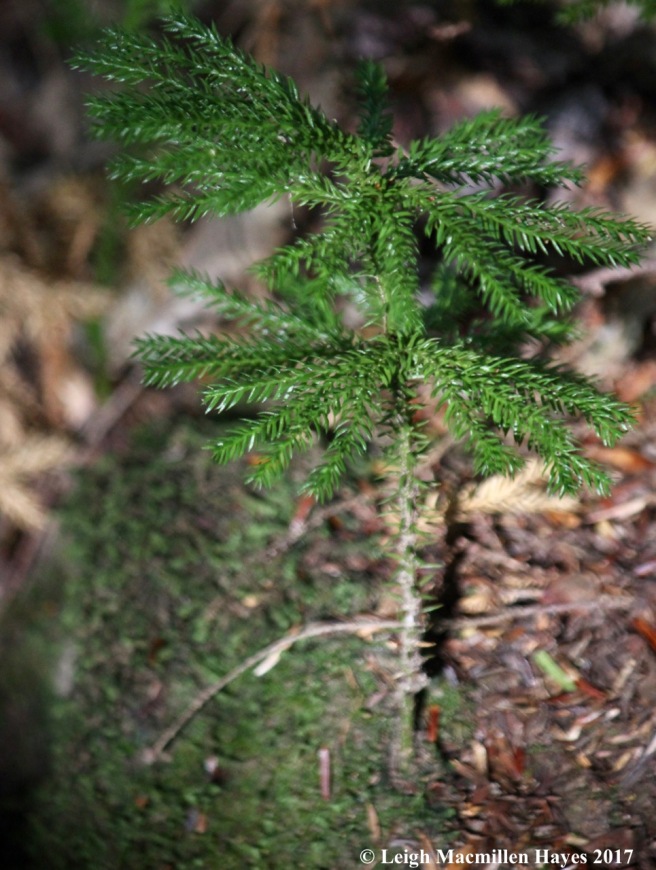 I also learned to ID one clubmoss–bristly tree so named for its bristly stem.

It was dinner time when I again held on for dear life as we drove up the road. To say we were sweaty, stinky, hungry and pooped would be an understatement. By the same token, I think I can speak for Mary and Alanna to say that we were more than grateful to have spent so much time learning from Rick. From wet to sweat–it was well worth the effort.

The opportunity was golden. Lakes Environmental Association’s Executive Director invited me to tag along with Dr. Rick Van de Poll as he conducted a Comprehensive Ecological Assessment at the Highland Lake Preserve. I couldn’t wait to be in Rick’s presence again, for he’s a walking naturalist encyclopedia. But . . . I’d been late in responding to an e-mail and didn’t know what time to meet him.

And so this morning I went in search. I located his truck parked just off the road at the northern end of the lake. I was certain I’d find him despite the fact that the preserve encompasses 325 acres and doesn’t have any trails.

It does, however, have an old logging road that bisects the property.  At a sunny spot which had once served as a log landing, I realized I wasn’t alone. A female Eastern pondhawk dragonfly graced the airspace. Being a skimmer, she paused frequently so I could take a closer look at her markings and delight in her bright coloration. 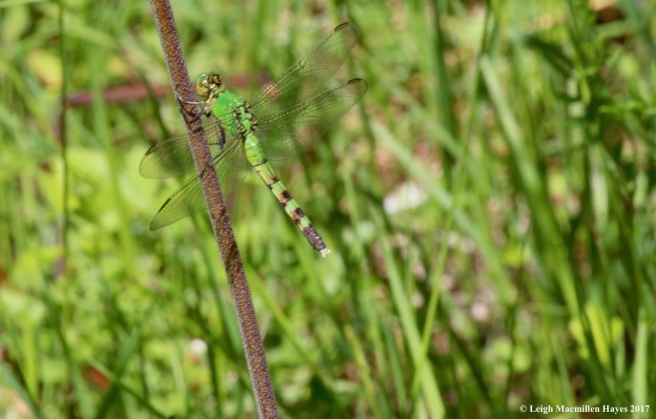 While her mate, whom I did not see, is powder blue, she was florescent green with black markings. And the stigmas toward the tip of her wings were pale brown. Did you know that Eastern pondhawks are known to be vicious predators and will even catch dragonflies similar in size–sometimes even other pondhawks? Wow!

Because I spent long moments at the old landing, I noticed a pattern in the sandy substrate and followed it to a snapping turtle egg laying spot. Something, possibly a raccoon had done what they do best–dug up and eaten some of the eggs. My hope is that it didn’t get all of them. But what made me wonder was the location, for this location seemed a distance from the water. How far do snapping turtles travel to lay eggs? 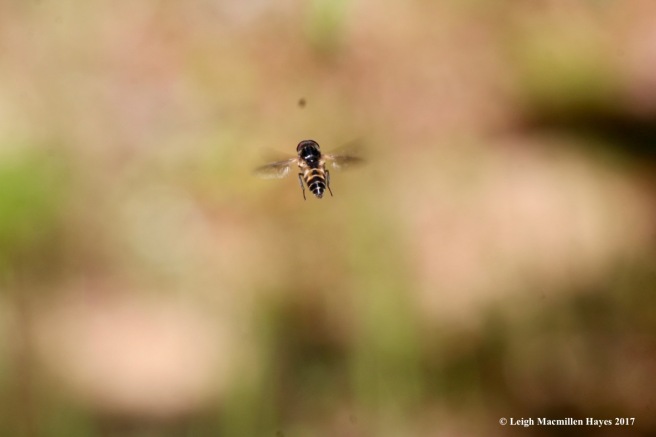 Also along the road, I periodically encountered hoverflies hovering. I’ve watched members of the species in my garden where they feed on nectar and pollen–known as nectaring. Hoverflies mimic the look of bees and wasps, but they don’t sting, which is good news.

Ever so slowly, with many pregnant pauses between movement, I made my way to the wetland that flows into the lake. And what should I spy? A snapping turtle sunning itself.

As I listened to the chorus of bullfrogs and red-winged blackbirds, I also noted the beaver lodge. And I heard something in the water, but never determined what it was. Could it have been Rick? Maybe.

Following the shoreline, I suddenly found myself in the company of a female ebony jewelwing damselfly. She was absolutely gorgeous with her dark wings topped with white stigmas and green and bronze body.

Continuing on, a pile of scat under an old hemlock caught my attention (are you surprised?)–porcupine scat. I looked inside, but no one was home. In fact, it had been a while–maybe since winter that anyone had been in residence.

At last it was time for me to head out of the preserve because I needed to head to Lovell for today’s start of the nature walk the Greater Lovell Land Trust provides each week for the Recreation Program. I made my way back to the logging road and followed it out. But again, along the way I was forced to pause. First, it was for a garter snake who I suspected was waiting for the sun to shine upon it. The snake never moved and I wondered if the leaves had served as a blanket and provided it a wee bit of warmth overnight.

And then I paused again to admire the pondhawk one more time and had the honor of seeing her catch an insect. I couldn’t tell what she was eating, though it looked like a large fly, but she gobbled it quickly.

I never did find Rick–my plans not being the best laid, but despite that I was tickled with my findings and knew it was time well spent. The opportunity was indeed golden.