A friend and I wandered aimlessly today with a mission of finding bobcat tracks. I should know better. Go without expectations.

So, yeah, we didn’t find any prints that were most certainly bobcat. We did find coyote and fox. And plenty of deer, turkey and ruffed grouse. And had great fun exploring while catching up. And taking time to notice and wonder.

While Dick strapped on his snowshoes, I took a look at the rhododendron bush that grows beside the barn. Today’s temp–45˚. A January thaw following last week’s deep freeze. Thus, the leathery leaves looked happy rather than curled inward as they do when the temperature falls. And last summer’s new growth offered a spring palette.

The woody capsules are like flowers unto themselves. I’m just realizing that though we have several rhododendrons growing by the barn and house, I’ve never seen any babies. Once ripened in the fall, the capsule splits open and its many seeds are dispersed by the wind–probably becoming bird food.

As we snowshoed about, trying to avoid breaking through ice in this rather swampy woodland, we saw where the deer had eaten red maple buds and bark, as well as where some had bedded down. But one of my favorite finds was a stick. Or so it may appear.

It’s a small, half dead balsam fir that served as a signpost. Can you read it? “My name is Buck. Keep out. Unless your name is Doe.” Yes, this is a deer rub created when antlers were pushed up and down, creating tags of bark dangling at either end with smooth wood in between. 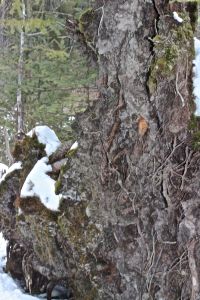 Then we came upon nature’s classroom–an uprooted tree. As a forever student, it’s a place I like to frequent. 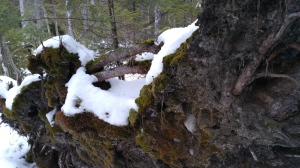 The tree fell years ago. Did anyone hear it? 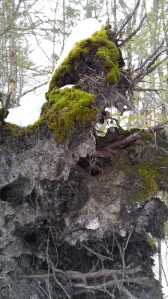 Among the roots, rocks and dirt, we checked for animal or bird sign and didn’t find any. 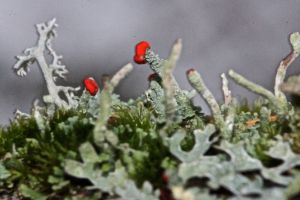 But the moss, lichen and liverwort garden is exquisite with its variegated colors and textures. 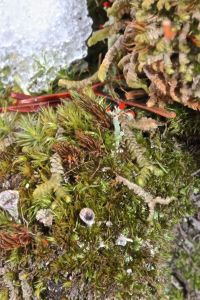 This miniature world resounds with a sign of its own: “Clean Air Here.” Lichens and mosses won’t grow were the air is polluted. 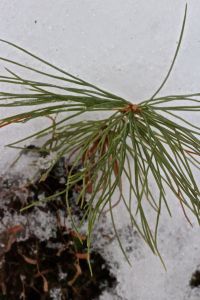 Other life forms also like this spot and see it as the perfect nursery. 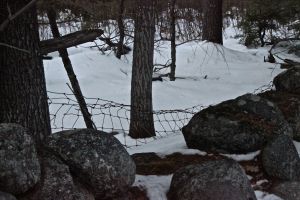 As is common in these woods, we stumbled upon the stone walls and barbed wire that speak to the land’s historical use. Borrowing a line from Robert Frost, this sign once read: “Good fences make good neighbors.” 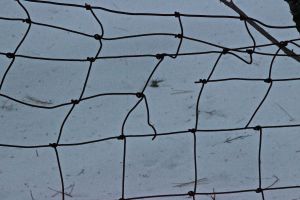 Gone are the days when the wall and wire are set again.

And so it was that we wandered and wondered along on an aimless mission–not finding the tracks of the bobcat(s) that journey here, but enjoying plenty of other signs along the way.