Our group was small but our experience enormous as five Maine Master Naturalists met in China, Maine, this morning to participate in a workshop about experiential learning presented by one of our own–the teacher of teachers, Anita Smith.

Upon arrival at the China School Forest where we met up, our nature distraction disorder (NDD) immediately kicked in for there was an osprey nest on a light post overlooking the ballfield between the middle and primary schools. The forest is a 50-acre tract behind the primary school that serves as a hands-on, outdoor classroom for grades K-8 and all of us really, for it is open to the public.

And then our attention was directed to the fire pond, where a stocky green heron displayed its streaked chest and dagger-like bill.

We watched him work the edge and loved when he showed off his crest–adding to our agreement about his ID. 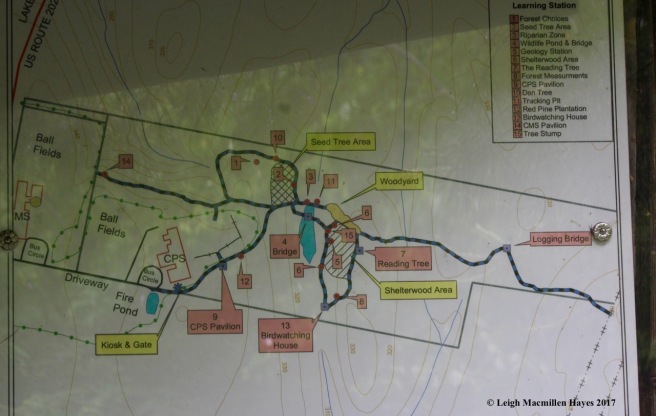 At last, we pulled ourselves away and let Anita begin, starting with an overview of the forest’s history and a look at the map posted on the kiosk. 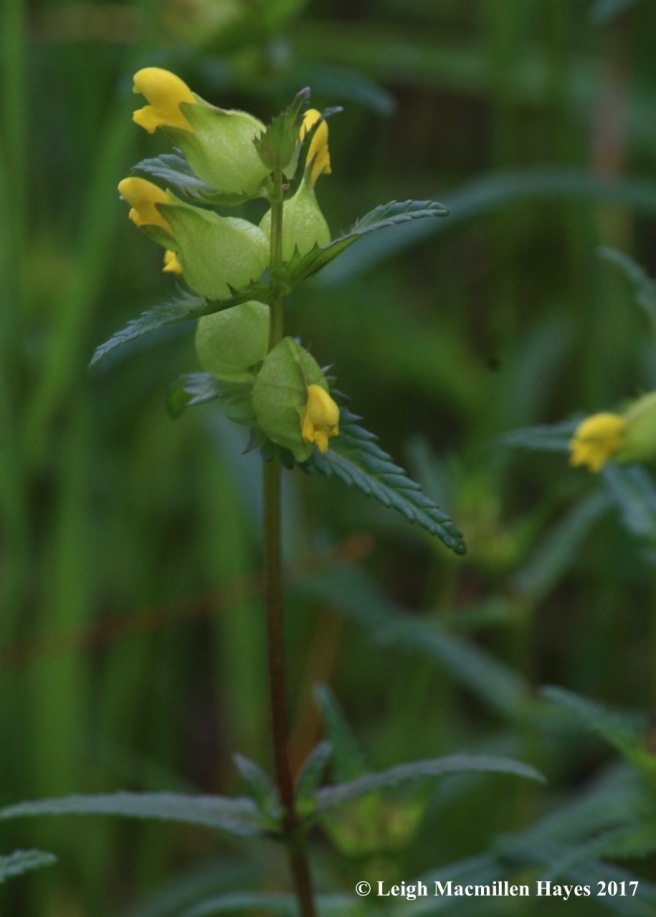 We headed off down the trail to a pavilion, but again were easily distracted. This was a plant I didn’t recall meeting previously, but its bladders and yellow faces reminded me of  fish faces. Karen later ID it as yellow rattle for when the seeds form in the bladders later in the season, they rattle. 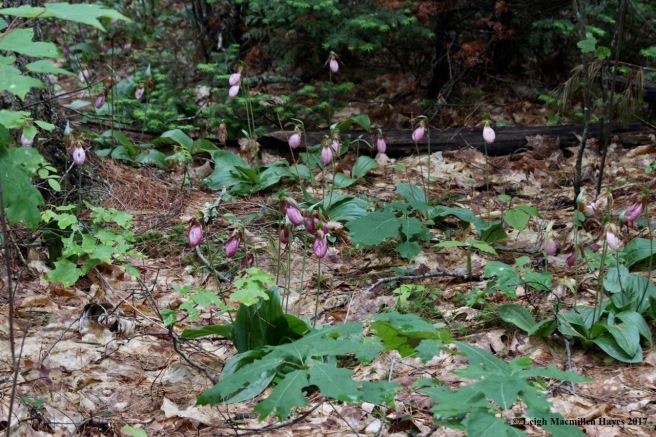 At last we arrived at the pavilion (only a few minutes walk down the trail if one wears blinders) where Anita had us help set up a work station and explained how she has students help cart the supplies. We started to help her, but within seconds Sally spotted the lady’s slippers and again we were distracted.

They were so plentiful that we couldn’t resist admiring them.

Most were princess pink. 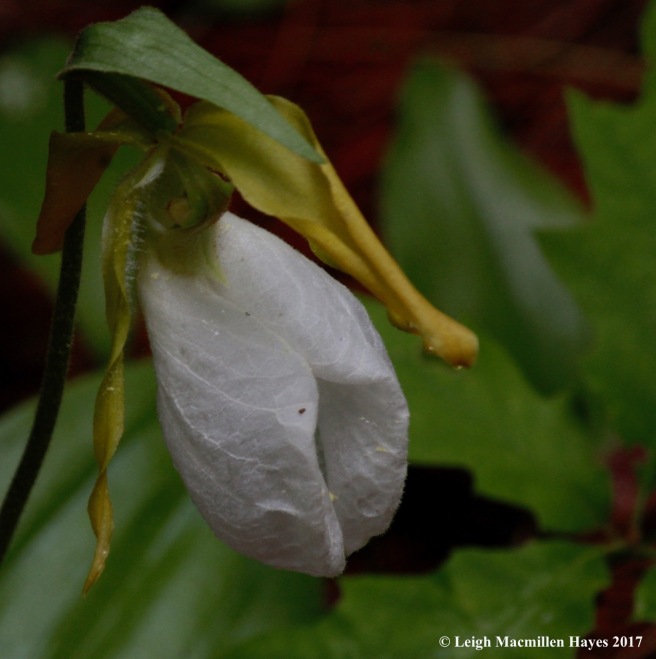 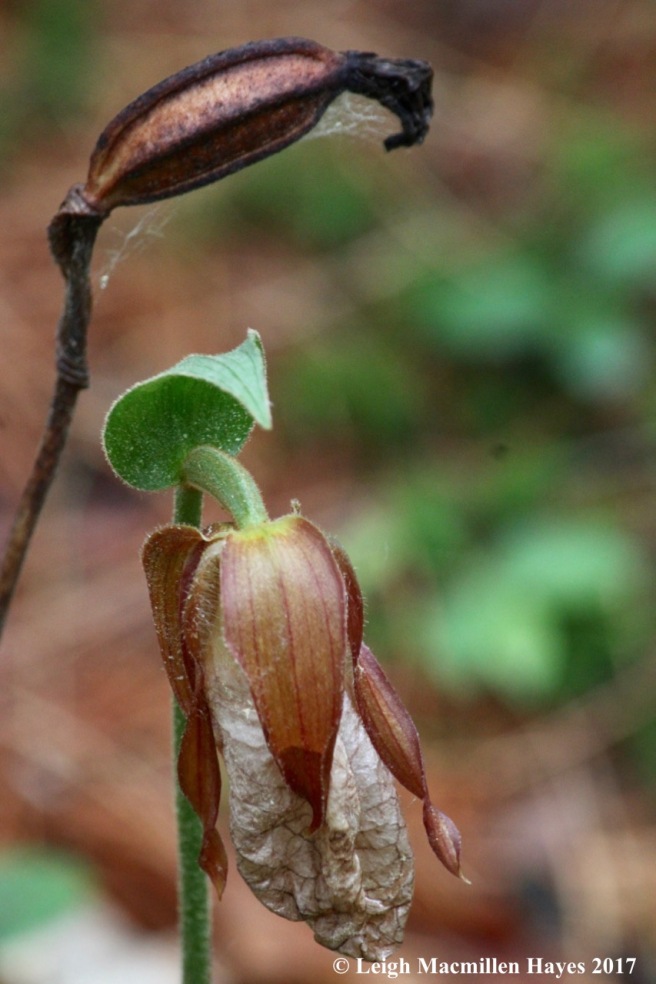 And even others spoke of transformation, with last year’s pods still standing.

Again, she pulled us back to the subject of the day. Because we were there to learn about activities we might use in our work with children of all ages, Anita had us create our own nature journals. Stamps and markers and pipe cleaners and solar beads and fabric and we were happy campers–each expressing our own creativity in designing the covers.

While we worked, baby phoebes watched from above.

Our next stop was the wildlife pond and bridge, where we did some pond dipping and were thrilled with our many findings, like damselfly larvae and tadpoles, 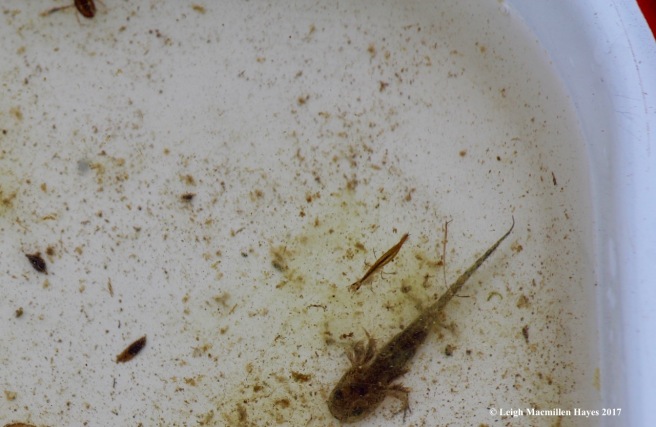 and water scavenger beetle larvae beside a salamander. There was so much more and we again had a difficult time pulling ourselves away.

It was the water scavenger beetle larvae that stumped us most, but we had fun identifying as many species as we could and were wowed by the variety available. 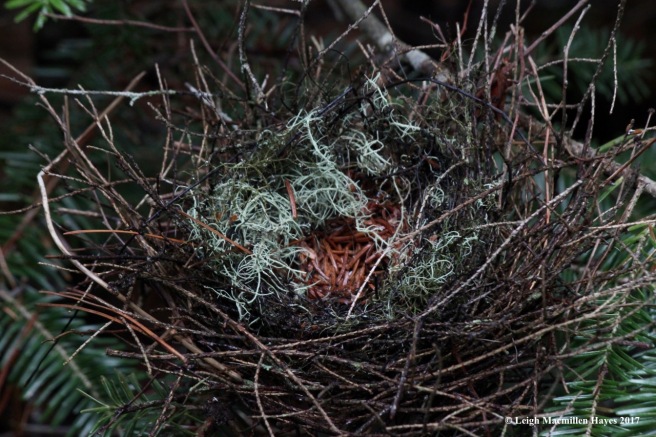 Leave we did at last–only first we checked out a nest Sally had discovered. While it sat upon balsam fir branches, we thought it had fallen from above. And marveled at its construction–balsam fir twigs, fruticose lichen and balsam fir needles, all in their own layers. 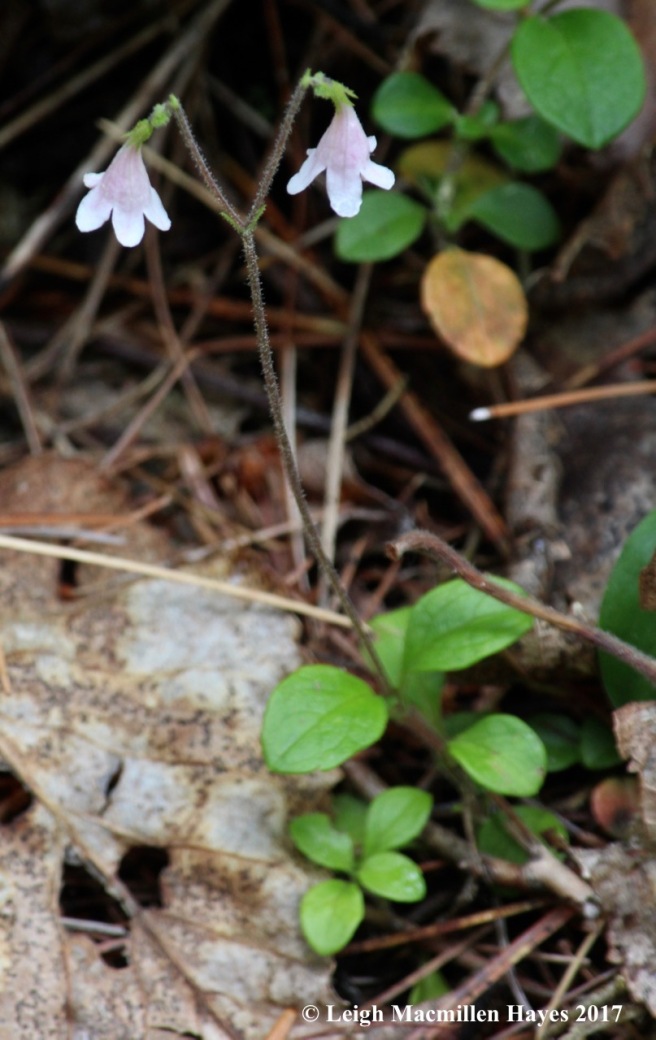 There were other things to see before we moved on, like the delicate twinflowers that bloomed. 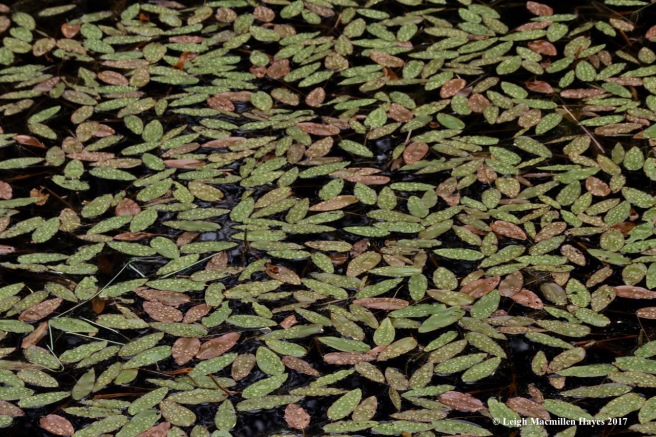 An artistic display of pondweed. 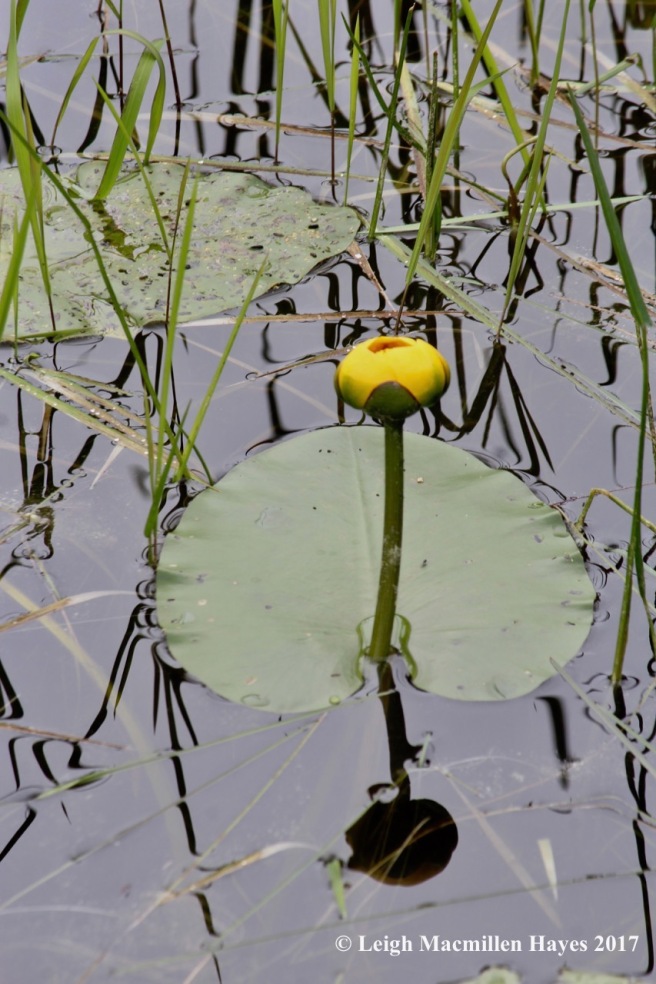 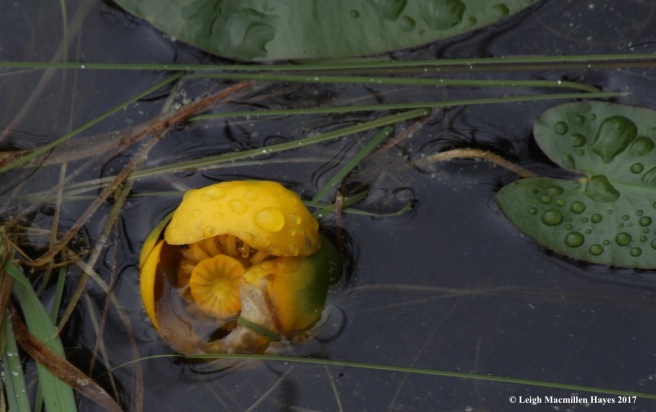 whose flower reminded me of the inner formation of pitcher plant flowers. 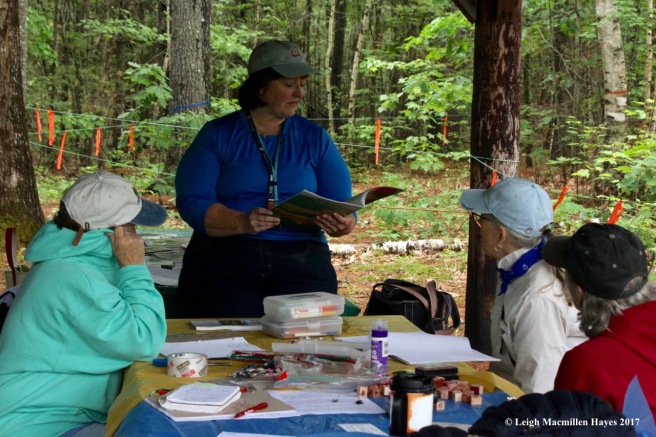 At last, lunch time arrived. And so we returned to the pavilion where Anita shared some of her favorite books. And then she read to us All the Places to Love by Patricia MacLachlan–warning us first that she would cry when she got to the end. Indeed she did, but we were touched for we got it.

After lunch, she took us on a tour to visit some of the seventeen learning stations, including the forest measurements station, where students learn about common measurements related to the forest and wood product industry, including board feet for dimensional lumber. 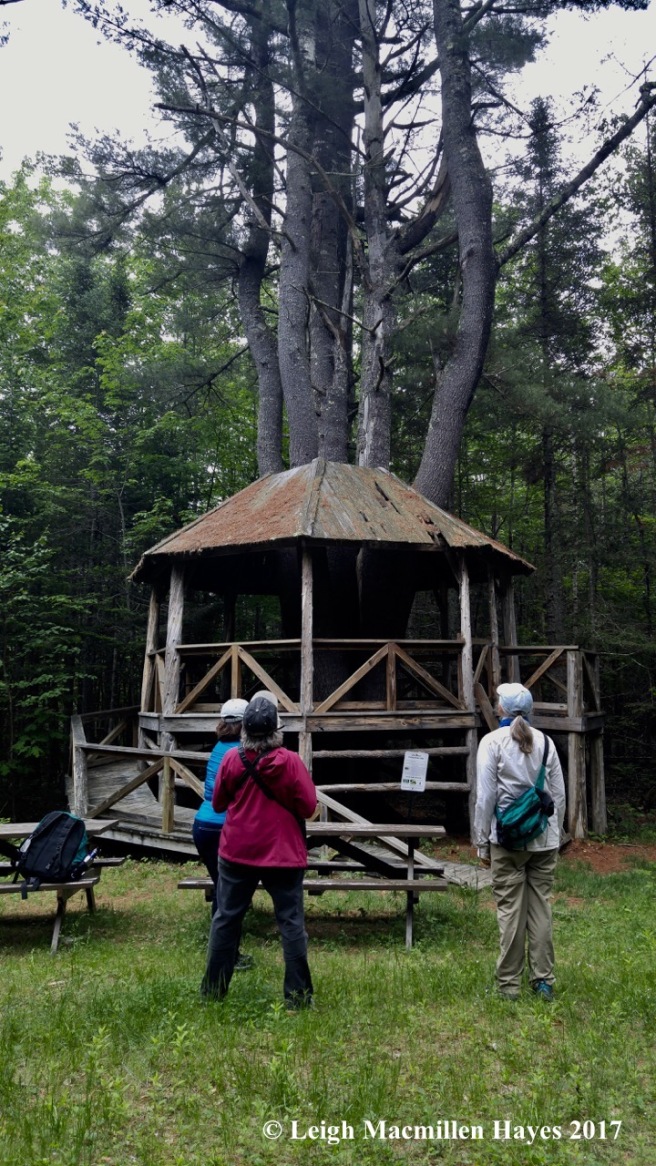 Every time I visit the China School Forest, I’m in awe. And today, I knew others, like Kathy and Cathy, felt the same. The forest was full of diverse species and twenty years ago the Town of China and folks like Anita turned it into an incredible space for children and the child in all of us to learn. My favorite spot of all has been “the reading tree” built around a weeviled white pine. Even those in wheelchairs may access it and find a spot to read or watch or listen. After we climbed up, we climbed down, and Anita led us through several fun activities, the last ending with M&Ms. What’s not to love about a seminar that ends with chocolate? 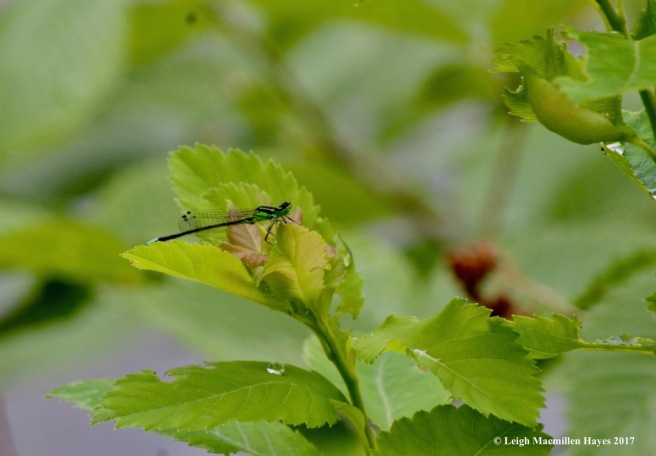 On our walk back, our NDD was ever on alert. And so we’d not seen too many dragon or damselflies in the morning, perhaps given the cooler temp. But on our way out, an Eastern forktail damselfly drew our admiration for its green, black and blue coloration.

We were beside the man-made pond when we saw it, where the bridge crosses and where we’d earlier done some pond dipping to observe the aquatic insects. It’s there that a bench sits in the midst of an outdoor classroom.

That very bench had been dedicated to our Anita. 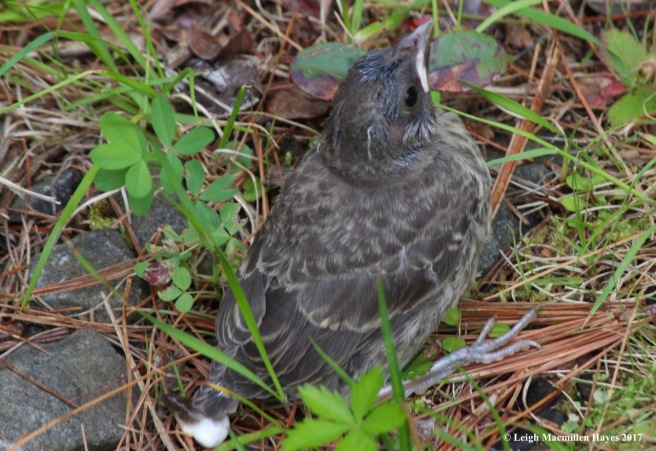 Back at the pavilion, we gathered all our gear and then followed the trail out. And that’s when Kathy called from ahead, telling us to watch our step. A baby robin sat on the path. We heard a parent nearby.

And wondered in the magic of the day. Another magical day in Maine.