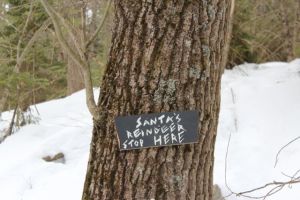 Apparently, Santa’s reindeer frequent the area. Of course they do. Isn’t he always making a list and checking it twice because he needs to know if I’ve been naughty or nice?

This morning, I revisited Robinson Woods, owned by the Cape Elizabeth Land Trust, with two other Maine Master Naturalists. A funny thing happened on the way to the forum . . . as we stood in the parking lot looking at materials in my tree notebook, two other women who had just completed a nature walk with elementary school students, came over and asked what we were doing. Feeling rather smug, I replied, “We’re Maine Master Naturalists.” I was about to go on when one woman immediately said, “So am I.” Gadunk. Turns out she was in the first class of the program, which graduated in 2012. We’d found another member of the tribe. 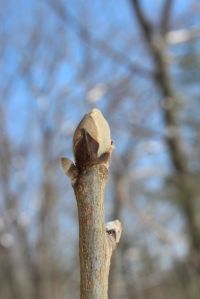 Last week, my friend and I found this young tree with buds. We keyed it out and were pretty sure it was Shagbark Hickory, but we couldn’t see any parent trees. Well, today we found them not too far away. 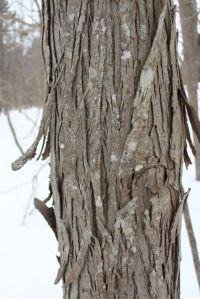 Shagbark hickory is found most frequently in southern Maine. Those who named this one got it right–certainly shaggy with those long, loose plates.

Because it is strong, tough and flexible, historically it was used to manufacture tool handles, carriages and wagon wheels. My hardware store owner husband tells me those are made of resin today. Shagbark Hickory is  now used for wood pallets, pulp and firewood.

After leaving the preserve, I drove down the road to Fort Williams Park, home of Portland Headlight, to eat my PB&J. I do eat other food occasionally–honest. Popcorn. With grated cheddar cheese.

According to the Cape Elizabeth town Web site, “On April 13, 1899, President McKinley named the one-time subpost of Fort Preble, Cape Elizabeth’s first military fortification, Fort Williams. Named after Brevet Major General Seth Williams, Fort Williams grew to be a tremendous military asset during World War II. Besides protecting the shoreline of Cape Elizabeth, the infantry and artillery units provided the Harbor Defense for Portland. After the war, many of the forts in Casco Bay were closed, including Fort Williams, which traded in its defense of the coast for caretaker status and Army Reserve accommodations. Fort Williams was officially closed and deactivated on June 30, 1963.” I was four and a half years old. 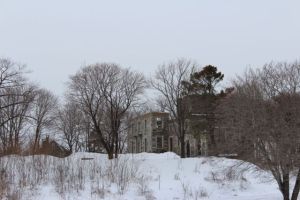 The Goddard Mansion still stands on the property. It’s not in great shape certainly, but was the home of Colonel John Goddard and his family during the 1800s. As youngsters, our boys loved to explore the nooks and crannies of this property that overlooks the fort.

More remnants of the fort. You’d better watch out, because Santa might be hiding in there.

One last look at the water before heading west.

Thanks for wondering along with me today . . . and Santa.