Oh ancient ones,
so tall and stout.

Your crown tells the story
of your true nature,
ever graceful as it is,
and decorated with
daintily dangling needles,
which spell your name
much like my fingers of five:
W-H-I-T-E.

In maturity you form furrows
of stacked outer layers
and I wonder about your age.
Within those furrows,
others, like a Stink Bug,
take refuge from the world,
especially as raindrops fall.

I have this and
so many other reasons
to revere you.
Today, I focus
on the decorations
you perhaps unknowingly encourage
by providing a scaffolding
upon which they may grow.
Mosses and lichens
first take advantage.
of your hospitality.

And they in turn,
offer places
for others to gather.
As I peek,
I notice tiny flies
of a robotic style
seeking each other.
The seeker advancing
upon a fruticose form,
while the seekee
waits on a foliose lichen.

Upon another,
a tiny cocoon,
once the snug home
for the larval form
of a Pine Sawfly.
Its opened cap
indicates the transformation
of another generation.

But my favorite find
on this soaking wet day
was caused by
a chemical interaction
that resembles
the creation of soap.

Some days are meant to be spent at home, especially when there’s yard work to finish up before the snow flies. And so today was just such a day and my guy chose to work on the leaves while I finished putting the gardens to bed and mowed one last time for this year.

It was while putting the garden to bed that I made a discovery–a form of bird’s nest fungi, this one being Crucibulum laeve! The structure is so named because it resembles a tiny bird nest. Prior to spore distribution, each “nest” is covered with a yellowish lid. Inside, the little disc-shaped “eggs” are called peridioles, which contain the spores. When a raindrop falls into the nest, the eggs are projected out of the cup. I’ve had the honor or watching that one rainy day, but it was one of those “you had to be there” moments that will live on in my mind’s eye.

In one of the gardens stands a rather decrepit Quaking Aspen. It’s a favorite tree for woodpeckers and porcupines. thus it’s terrible condition. And usually I post photos of bear claw trees, but this particular aspen sports many, many porcupine scratches, some new and others older, such as these.

As I looked at the bark to notice what else might be about, I spotted a spotted ladybug. We’d had a frost overnight, but she continued to move, however lethargically. 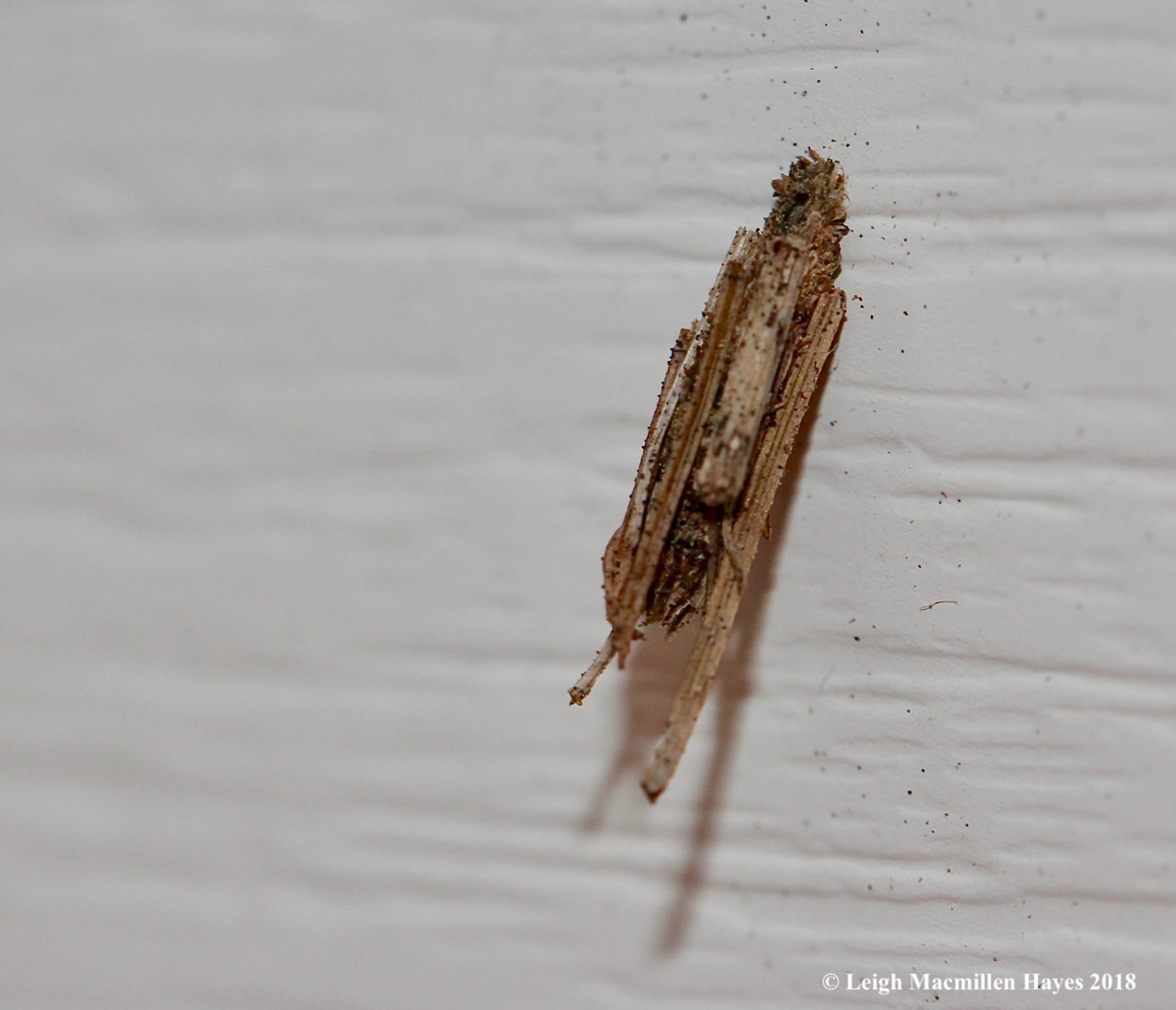 By the kitchen garden, I found another insect I’d forgotten all about these last few weeks–the caterpillar larvae of the Psychidae or bagworm moths that construct cases out of silk and environmental materials, much the way a caddisfly might. It’s the perfect camouflage from predators such as birds and even other insects.

Everywhere throughout the garden were milkweed seeds, some wearing beaded skirts that will likely keep them in place. That’s fine with me, for I love milkweed. Even if this one does eventually fly away on a whim and voluntarily plant itself in another location, I know that my plants will produce more seeds for they also increase their population via underground tuberous rhizomes. Some call them invasive; I call them welcome.

I’m not so sure the creator of this large hole in the yard is welcome. I know my guy wasn’t impressed. It’s about a foot wide and deep. We suspect one of “our” woodchucks. I’d rather think it was excavated by the beautiful red fox that crosses the yard several times a day, but it’s a bit away from the fox’s route.

My wander eventually took me from the garden to the stone walls, where lichens form their own little gardens and support such species as the Mealy Pixie Cups, a fruticose lichen with a stalk or podetia below the cup.

Foliose-styled rock shield lichens grow abundantly on the rock’s surface, their success due to the numerous disk-shaped structures called apothecia. Reproductive spores develop on the rolled edges of the brown berets, awaiting the time when conditions are just right for them to move on and grow into a new lichen. 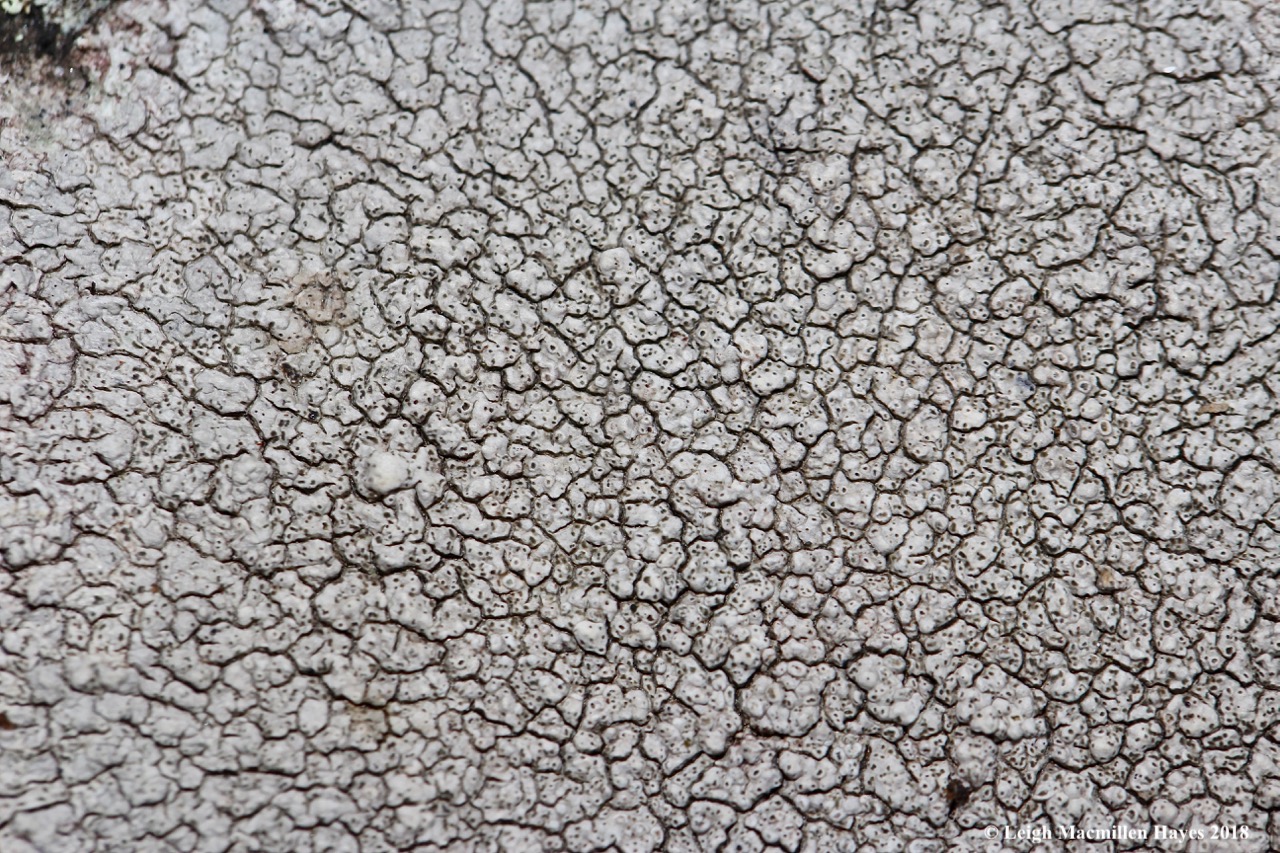 Crustose lichens were the most plentiful with their painted on appearance, like this ash-gray Cinder Lichen that reminded me of a mosaic piece of artwork.

One of my favorite crustoses, however,  was the Concentric Boulder Lichen with its raised blackish-brown apothecia. Each time I saw the pattern created by the little disks, I felt like I was looking at a maze. 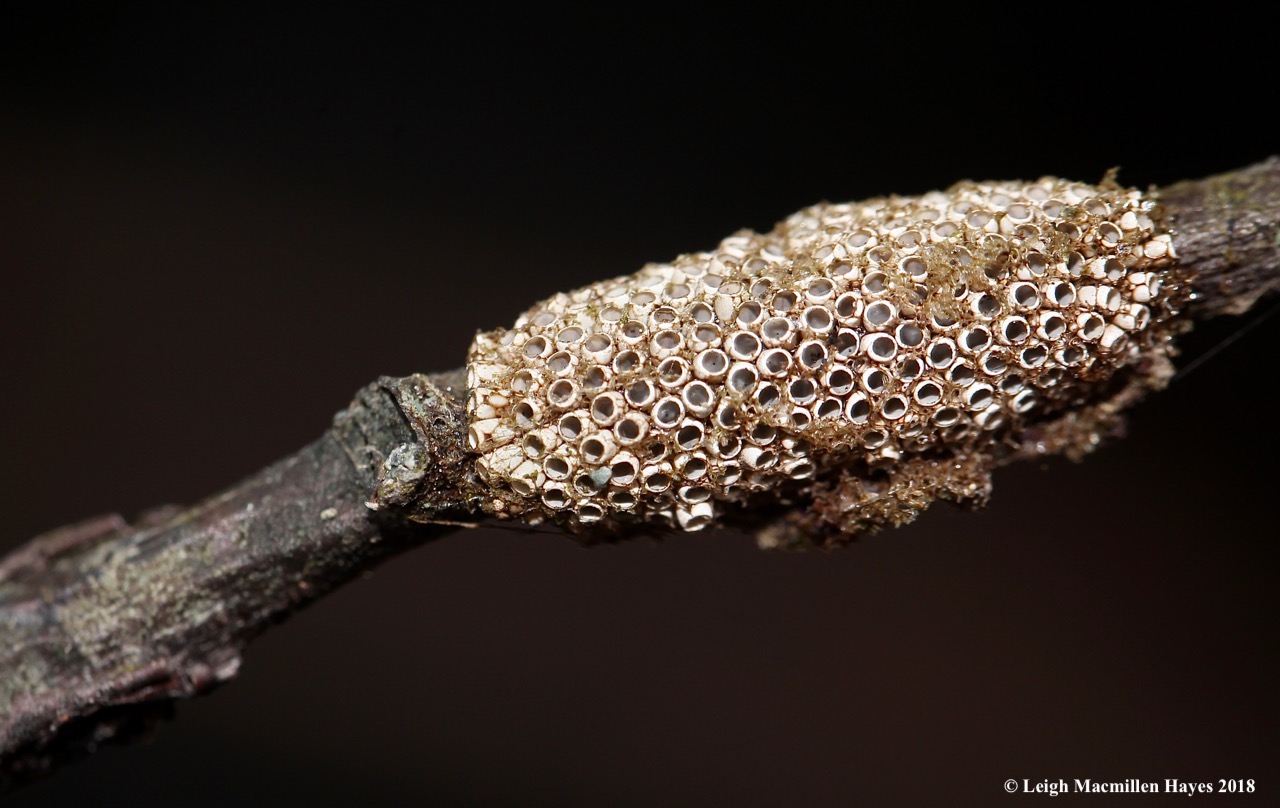 And then I stepped over the wall and turned my attention to some trees. That’s when I spied numerous tent caterpillar eggs cases. The Eastern Tent Caterpillar overwinters as an egg. Each one is part of a greater mass of anywhere from 150 to 400 eggs. They encircle a branch and are almost impossible to see, until your eye begins to recognize the structure. This was an old one and no longer had the shiny varnish-like coating that will help keep winter at bay. 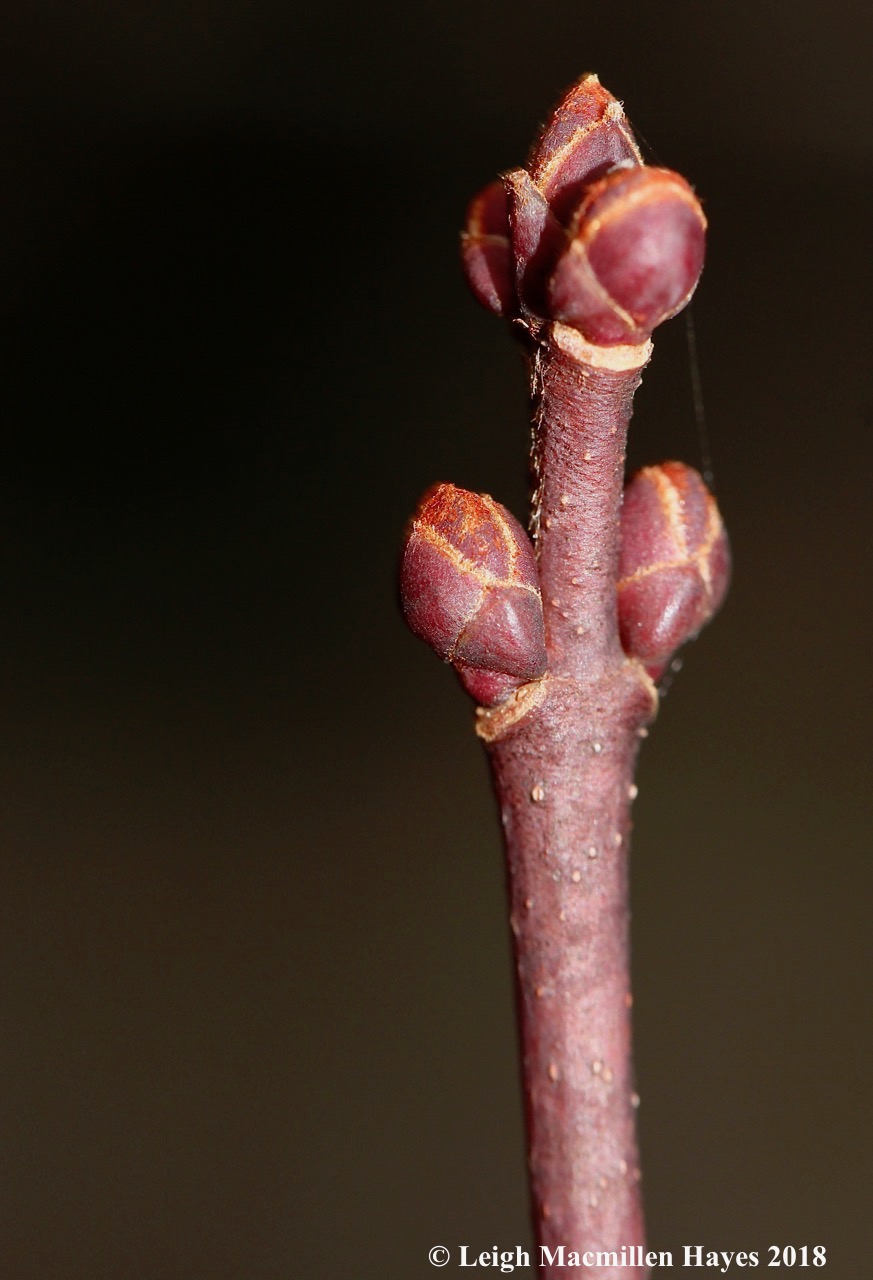 Also keeping winter at bay were the waxy scales of tree leaf and flower buds. The buds formed in the summer and now must wait for February’s warm sun before they begin to swell and ready themselves for next spring’s bloom. In the meantime, they are snug inside their tight structures.

My next great find–tubes or tunnels created by the Pine Tube Moth. Last summer, larvae hatched from eggs deposited on the needles. Though Eastern White Pine needles grow in packets of five (W-H-I-T-E or M-A-I-N-E is a mnemonic we use to remember how many needles on the white pine, spelling “white” for its name or “Maine” because it is the state tree.) Anyway, the tube moth used silk to bind a bunch of  needles together, thus forming a hollow tube. Can you see the silk at the top? Notice the browned tips–that’s due to the larvae feeding on them. Eventually the overwintering larvae will pupate within the tube and in April they’ll emerge. Two generations occur each year and those that overwinter are the second generation. The good news is that Pine Tube Moths are not considered a significant pest.

One of my favorite finds as I headed down the cowpath toward home was actually an old friend–Pinesap in its winter capsule form. Pinesap is similar to Indian Pipe, another Monotropa (once turned speaking to its flower that turns upright after fertilization). The creamy whitish flowers developed into woody capsules. As the capsules mature, the structures become erect. Once ripened, seeds will be released through slits that open from the tip to the base of the capsules.

I was back in the grassy part of our yard when I passed by a tree in the corner and made a new discovery–a false tinder conk or polypore, with its black fissured cap. My very own Phellinus ignarius! While a Tinder Conks pore surface is usually concave, in the false specimen, it’s angled downward from the rim to the tree.

I know my friend Faith will see a smiley face in the upper spore surface; it rather reminds me of a weasel.

We never left home today, my guy and me. Our focus was on the yard, but mine was a wee bit different than his. And for those of you who have been asking–these photographs were all taken with the Canon Rebel T3i. Yep, that’s the one that got wet when I decided to flip off a boardwalk last May. 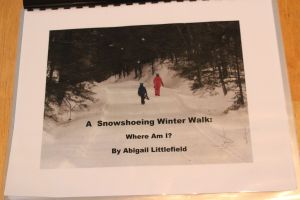 Summer may be in full swing, but I just received a copy of a special book created by a young friend and I wanted to feature it this month. The photos will cool you down on a steamy day.

This past February, Abby Littlefield, her younger brother and their mom, invited me to snowshoe with them at Holt Pond Preserve in South Bridgton. Abby was in fourth grade and needed to complete a project based on an ecosystem. She chose wetlands and wanted to learn more about the flora and fauna of the preserve.

I was thrilled to receive a copy of the book Abby made about our journey and delighted to discover how much she remembered from our trek. She and her family were real troopers that day–the temp was quite low, snowshoeing was a new experience for them and we spent about three hours on the trails. She reminded me of myself as she jotted down notes and we examined everything closely.

I did notice that her story doesn’t include the pileated woodpecker scat–not her favorite find. (Her brother thought it was rather special. :-))

Here are some pages from Abby’s book: 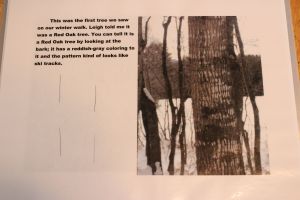 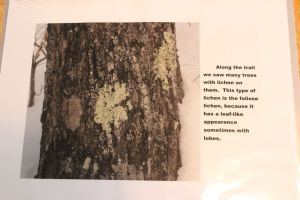 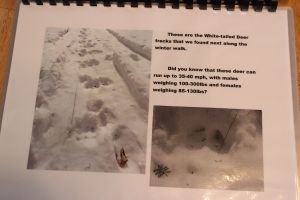 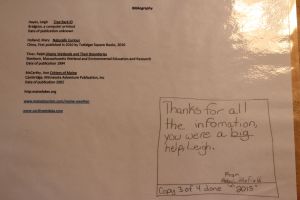 Mighty impressive for a fourth grader. Congratulations, Abby, on a job well done. And thank you for letting me wander along with you and your family. It was a pleasure and I look forward to future expeditions.